The still strengthening hurricane Laura has literally *exploded* today. It has intensified into a monster ~ 145 mph (125 kt) hurricane, much beyond expectations! The winds are now just 10-15 mph far from the threshold for the highest, Category 5 strength. Catastrophic storm surge, extreme winds, and flash floods are expected along the northwest Gulf Coast tonight!

Laura has around 8-12 hours to its landfall in extreme southwestern Louisiana, so further intensification is possible. The landfall is expected somewhere around the town of Cameron, LA. To the south-southwest of the city Lake Charles and south-southeast of Beaumont.

However, Laura’s eye and surrounding eyewall are so big, the whole area will be affected by destructive winds and flooding! 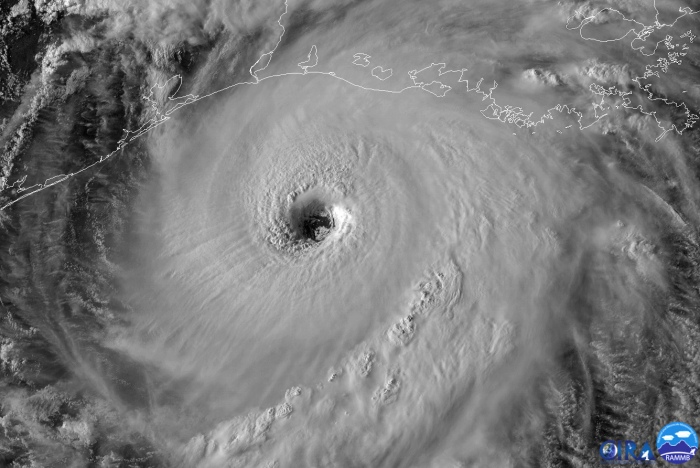 1. Unsurvivable storm surge with large and destructive waves will cause catastrophic damage from Sea Rim State Park, Texas, to Intracoastal City, Louisiana, including Calcasieu and Sabine Lakes. This surge could penetrate up to 40 miles inland from the immediate coastline, and floodwaters will not fully recede for several days after the storm.

3. Widespread flash flooding along small streams, urban areas, and roadways is expected to begin this afternoon into Thursday from far eastern Texas into Louisiana and Arkansas. This will also lead to minor to moderate freshwater river flooding. The heavy rainfall threat and flash and urban flooding potential will spread northeastward into the middle-Mississippi, lower Ohio, and Tennessee Valleys Friday night and Saturday. 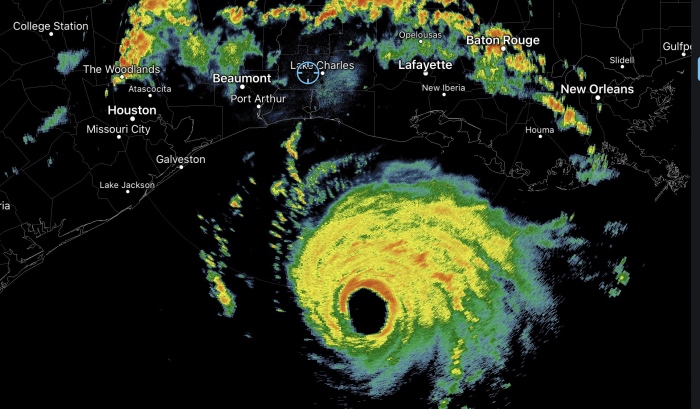 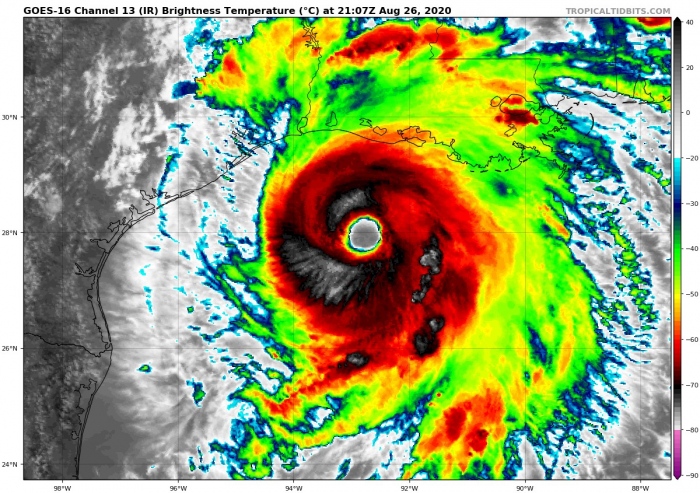 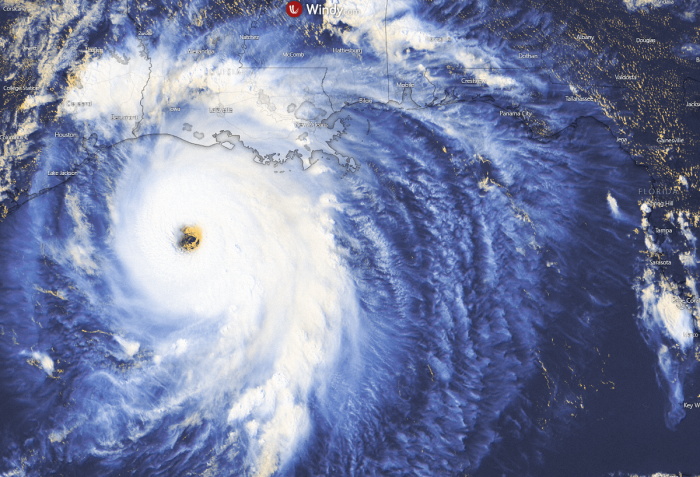 Here is an animation of a very close-up visible satellite view og the eyewall. Simply outstanding!

Advanced Dvorak Technique (ADT) analysis estimates are indicating there are hurricane-force 64-knot winds spread across 60-75 miles radii around the eye. While tropical-storm winds are extending 95-120 miles around the center. Winds are now already significantly increasing along the south Louisiana coast.

The rate of intensification was beyond exceptional today. Dvorak analysis is estimating 929 mbar central pressure and winds of 127 knots. This is the final T number of 6.3. Hurricane Laura has intensified for 50 knots within the past 24 hours (Aug 25th, 18 UTC – Aug 26th, 18 UTC).

The latest NOAA Hurricane Hunters recon pass through the eye of Laura has reported around 120 knots of maximum sustained winds and central pressure ob around 947 mbar. Rapidly falling. The strongest winds are, as usual, within the northeastern quadrant. This is the main part of the hurricane which will strike the coast of southern Louisiana. Destructive winds are expected. 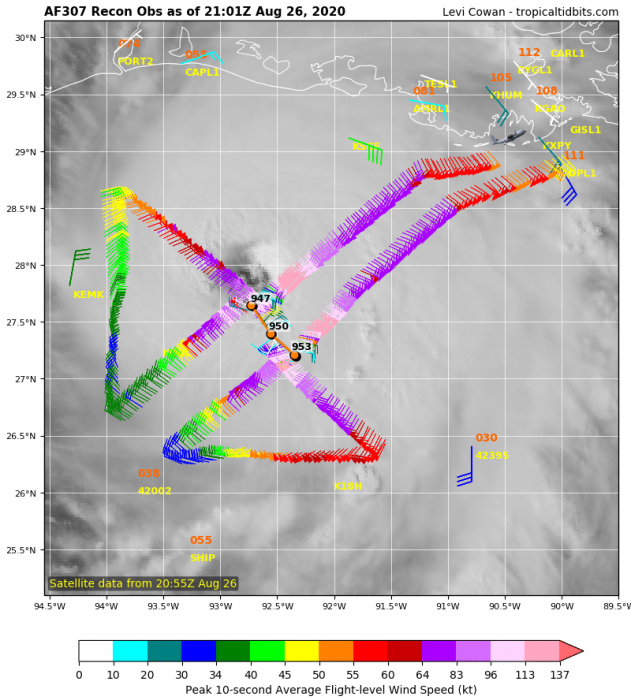 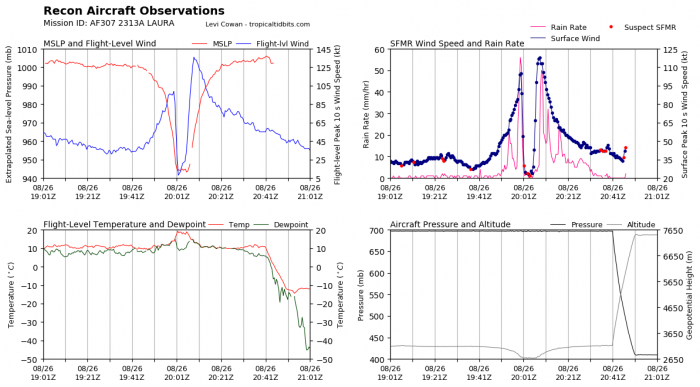 A dropsonde, penetrating through the northeastern eyewall has reported a surface winds of 123 knots, with a central pressure of 953 mbar. Notice there are 155 knots (= 180 mph = 285 km/h) winds at 900 mbar level, that is remarkable. The lowest 150 meters have a mean wind of 130 knots (150 mph). Laura is a violent hurricane and the impact will be destructive. 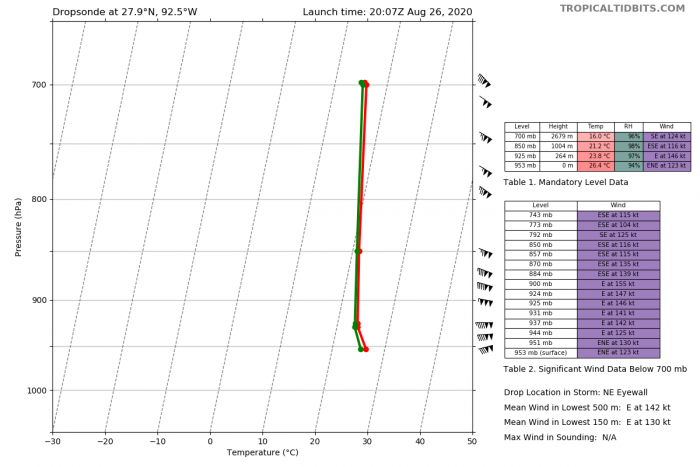 The late ECMWF model is *very* violent with its prediction of Laura’s impact. It is simulating peak wind gusts up to 200 mph (175 knots = 320 km/h) near the coast. Precisely, near Cameron or to the immediate east of the town. The central pressure could be even lower than 925 mbar if this occurs. 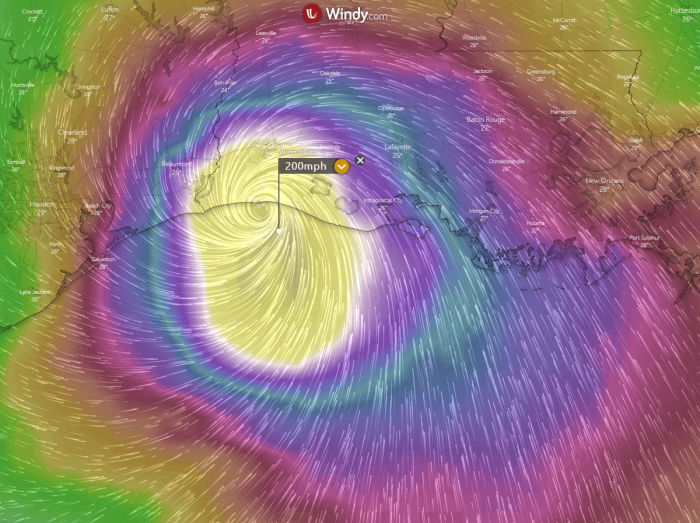 Peak wind gusts at the time of landfall. Graphics: Windy.com

Additionally, the amount of rainfall is also concerning. Flooding could be catastrophic. Together with a major storm surge expected with so powerful winds, conditions might be unsurvivable in places. 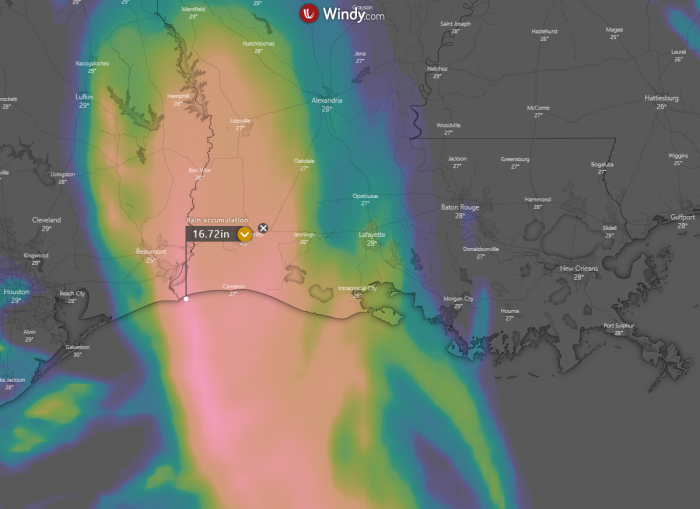 Please refer to the morning update with additional forecast discussion after Laura’s landfall: