Although there was a sudden, almost rapid stop in the tropical activity in this year’s record-breaking hurricane season, there is no reason to distress. NOAA forecasters and weather model data suggest the environmental conditions should soon support additional tropical disturbances. The Caribbean region could soon see a new tropical formation.

Both the environmental and oceanic conditions are again becoming more favorable for tropical formation in the western Atlantic and the Caribbean. The potent MJO wave will emerge from the west while a very warm Caribbean sea temperature remains. It seems that a tropical formation is just a matter of time.

So far, the 2020 hurricane season has developed twenty-three (23) named storms. As the 21 reserved names were already used by Sept 18th, the Greek Alphabet is now in use. The exceptional fact is, that 20 storms out of all 23 have had the earliest formation on record.

There have been 8 hurricanes this year, two of which have reached a major hurricane – a Category 3 strength or greater. Hurricane Teddy and Laura have both peaked at Category 4 strength. Laura made landfall in Louisiana.

September 2020 was the busiest month on record. 10 named storms have formed which breaks the previous record of 8 named storms. Thish has happened three times until this year, in 2002, 2007, and 2010.

The most recent tropical cyclones were Hurricane Teddy, which also was a major hurricane, that blasted into Atlantic Canada last week. And also the Subtropical storm Alpha and Tropical Storm Beta (both from the Greek alphabet list) were active.

Alpha made landfall in Portugal, while Beta has brought significant flooding into southeast Texas last week.

The next named storms from the list will be Gamma and Delta. 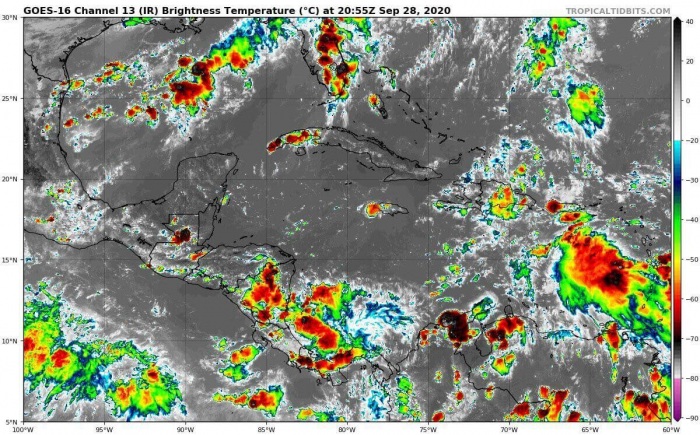 Normally, the western Atlantic and especially the Caribbean has a very hot water through September and October months. Temperatures are no different this year. 30 °C to nearly 32 °C are spread across the whole Caribbean region, especially around Cuba and Jamaica.

Conditions are there, supportive of a massive source of energy for the tropical disturbances in the region. 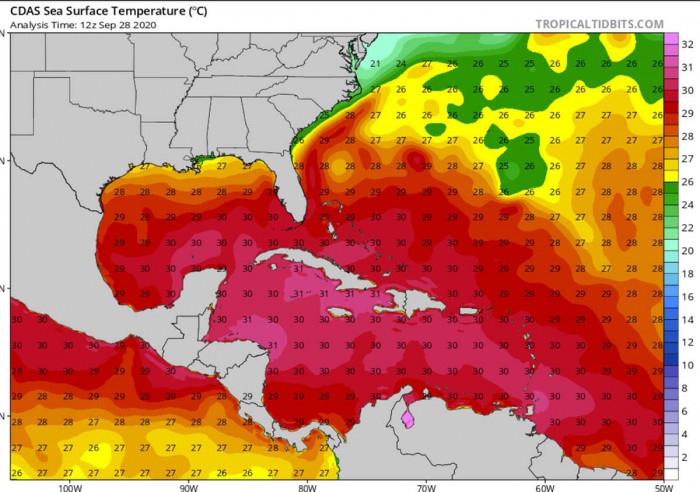 The current sea surface temperature anomaly over the western Atlantic and the Caribbean reveals that the seas remain several degrees above the long-term normal for late September. Close to 2 degrees Celsius sea temperatures are observed across the eastern, central, and northwestern Caribbean. Also over the southern Gulf of Mexico and the Bahamas. 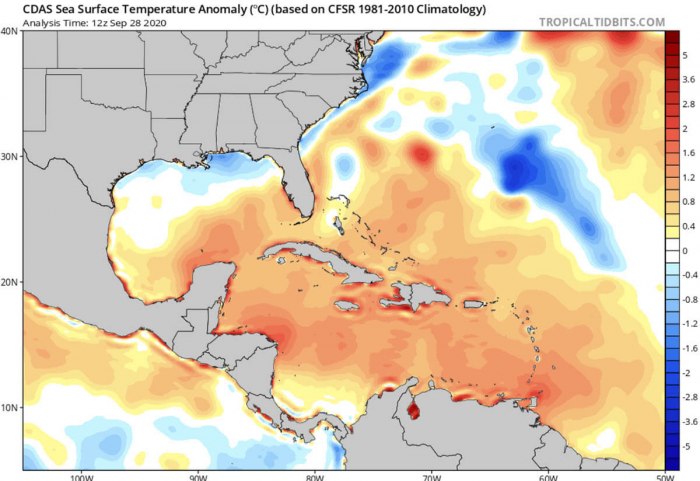 Notice there is an obvious negative anomaly south of Bermuda. This is the cold wake left behind the Hurricane Teddy passing over this part of the Atlantic in mid-September.

The cold patch over the northern Gulf of Mexico is also the upwelling result left behind Hurricane Sally.

Upwelling is a process in which deep, cold water rises toward the surface. The displaced surface waters, often moved by the ongoing strong tropical system are replaced by a wind-driven motion of dense, cooler and nutrient-rich water that ‘wells up’ from below.

Pattern change over the Caribbean

As we discussed in our previous discussion, the temporal hurricane season took a short break through the end of September. But things are expected to ramp up again.

Statistically, the tropical activity and storm development in October is focused more on the western Caribbean, the Gulf, and the southeast US as the Eastern Atlantic gets less activity due to an African easterly wave shutting down.

An extensive and quite strong upper-level ridge (blocking) pattern develops over the Atlantic this week. This favors a rather strong eastern flow over the Tropical Atlantic, helping the potential energy to accumulate towards the Caribbean. 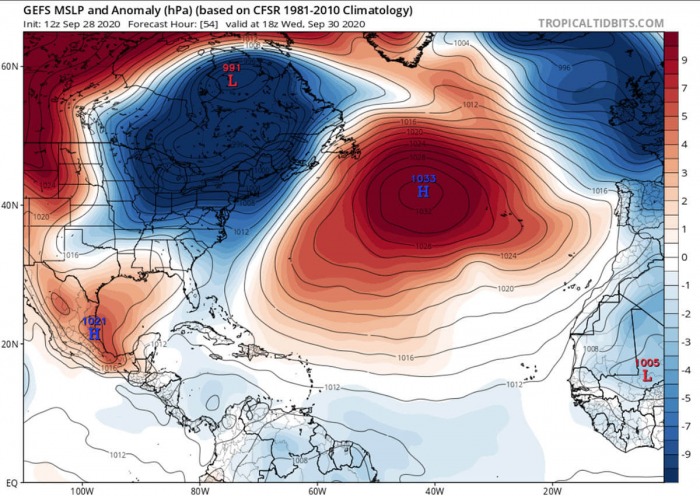 Soon after we head into October, the MJO wave will enter the Caribbean region from the west. This normally results in lowering the surface pressure and provides a strong boost to thunderstorm activity.

And so is changing the large-scale pattern on the weather models late this week. After the cold outbreak over the CONUS, a strengthening jet streak develops over the southeast US. 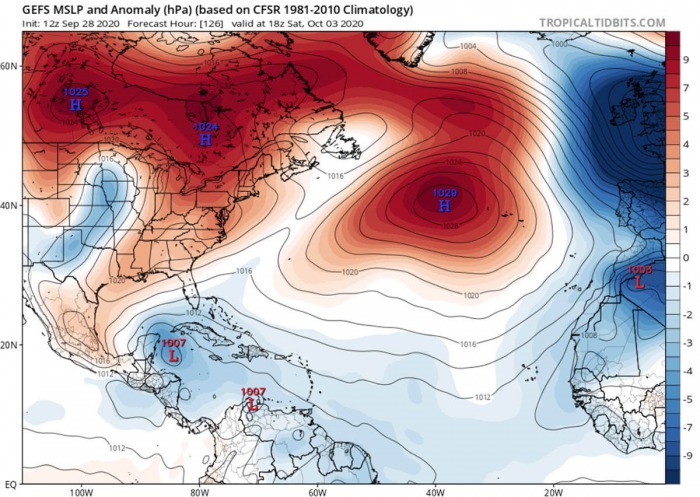 With a tropical (MJO) wave entering the region from the west simultaneously, the environmental conditions will become favorable for a tropical formation. 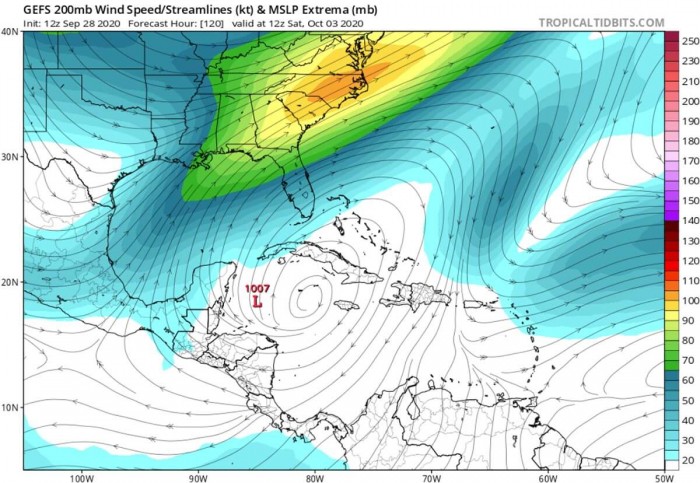 The tropical Atlantic and the Caribbean has gone from very active to completely shut down activity over the last week. No tropical disturbances were observed this weekend.

But as the National Hurricane Center (NHC) is highlighting, there is an area marked over the northwestern Caribbean. Increasing chances are that a tropical wave will have a reasonable chance to develop into a tropical depression sometime over the next few days. 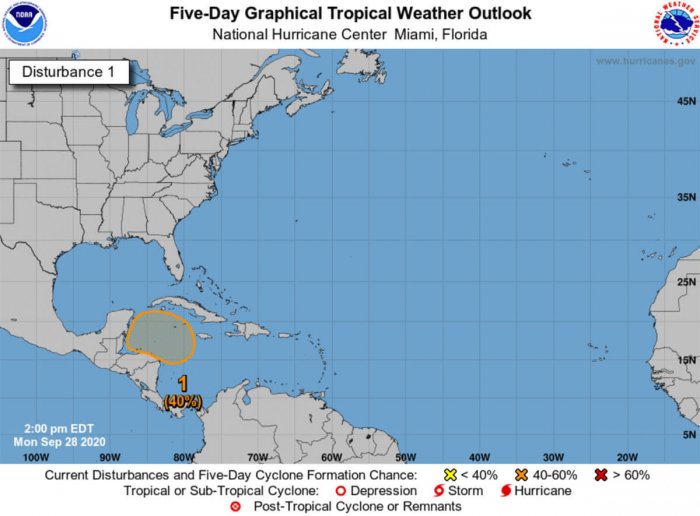 NOAA forecasters noted: “There is a broad area of low pressure is expected to form over the western Caribbean Sea in a few days. Environmental conditions are expected to be conducive for some gradual development thereafter, and a
tropical depression could form late this week or this weekend while the system moves slowly west-northwestward over the northwestern Caribbean Sea.”

The NHC is forecasting there is a 40 percent (%) chance of a tropical depression formation over the next 5 days. The ensemble forecast (attached is the GEFS model) does hint a fairly reasonable potential over the northwestern Caribbean for this weekend. 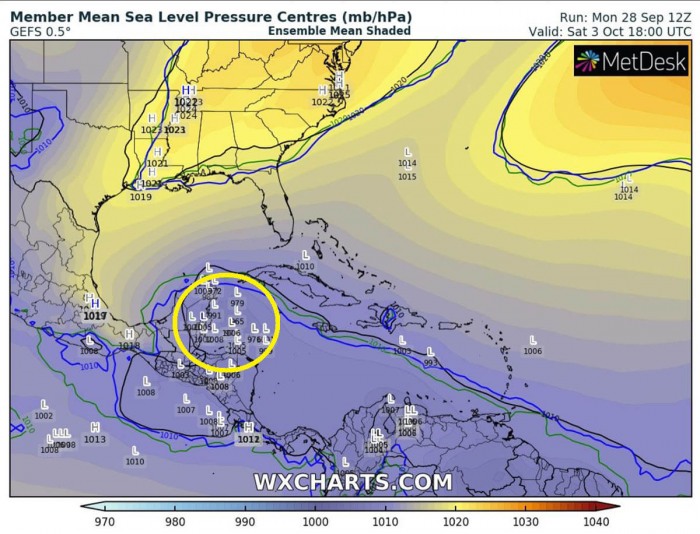 There are a couple of potential scenarios existing for the track of this disturbance. Depending on the strength and placement of the upper-level ridge (divergence), this wave would travel.

There is potential it may either head inland into southern Mexico, head for the Gulf of Mexico, or possibly even heat northeast towards the eastern Gulf or Florida next week. The GFS global model does have some hints with this solution. 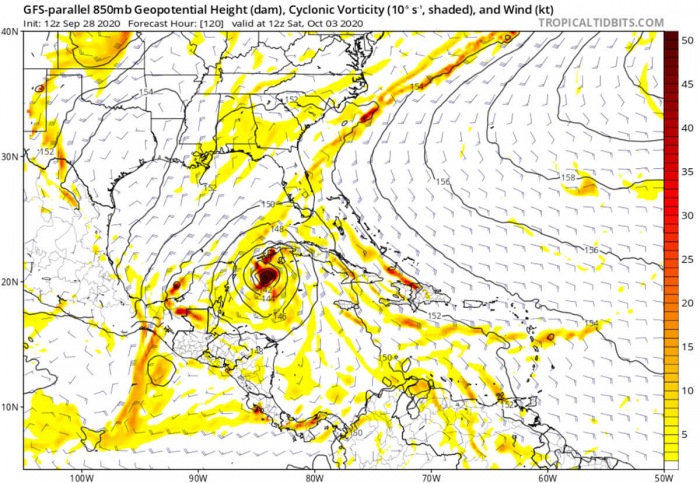 Should this system become a tropical depression or later on a tropical storm, it would be given the name ‘Gamma’ from the Greek alphabet.

A rotating list of storm names is used, the list repeats every six years. For example, the list of 2020 will again be used in the year 2026. Male and female names are alternated in the list.

For the Atlantic Basin during the 2020 hurricane season, there were 21 names reserved to be used for tropical systems.

All were used already, the list was completed by Sept 18th as a the last letter ‘W’ was used by Tropical Storm Wilfred in the Eastern Atlantic.

If hurricanes develop historic levels, becomes particularly deadly or costly to life and property, its name is retired. Retired names, if any, will be announced by the World Meteorological Organization (WMO) in the spring of 2021.

The retired name is then replaced by another one.

There is an increasing potential that the tropical activity over the Caribbean region will soon return. The NOAA NHC forecasters are giving a 40% chance for a tropical formation in the northwestern Caribbean late this week.

Both the environmental and oceanic conditions are again becoming more favorable for tropical formation. The MJO wave will emerge in the region from the west while a very warm Caribbean sea remains. It seems that a tropical formation is just a matter of time.

And it may indeed happen very soon. Conditions have to be closely monitored over the next days. Stay tuned!