It has been again very warm and hot weather across a large part of the United States lately. But a major pattern change seems to be coming in this week ahead. A quite intense cold blast from Canada is forecast to spread into the eastern US next weekend, resulting in a chilly start of October.

West Kansas from snow to 100°F in two weeks

We can remember the historic cold outbreak in early September which has brought the first snowfall of the season, also record-breaking in some areas of Colorado. What was interesting with the event was the extreme heat prior to the event, replaced by unusually cold periods and then also snow accumulation.

Measurable snow was reported from the Colorado plains, including Denver, Pueblo, and others. Also western Kansas. The pattern has then changed back to a very warm period again through mid-September and it continued over the last weekend.

This weekend, a weather station located 13 miles (16 km) north-northeast of Tribune, Kansas has reported some remarkable observation. What appears as another exceptional record-breaking event is the temperature reaching 100 °F (38 °C) again after the measurable snowfall on Sept 9th. 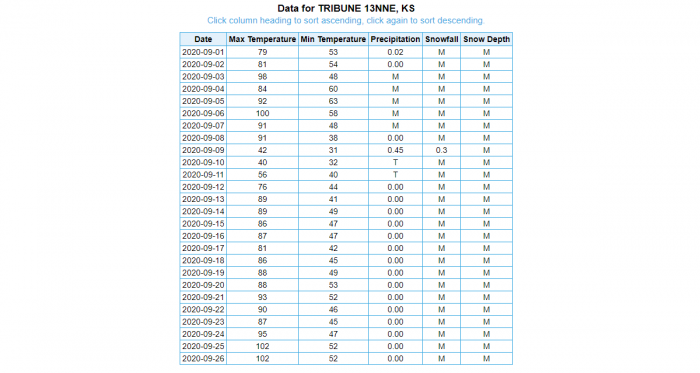 Notice one thing, there was 100 °F (38 °C) on Sept 6th. Then, a much colder daytime maximum was observed on Sept 10th, during the peak of the cold outbreak. Some snow, 0.3 inches (0.5 cm) was officially reported a day before, staying on the ground less than 24 hours, however.

Although this data, provided by Brian Brettschneider is yet to be officially confirmed, it appears that this could be the first weather station in the US climate record (for any year in the past) to have a 100 °F (38 °C) peak temperature measured after their first measurable snow of the season.

Huge temperature changes are often observer to the east of the Rocky mountains, as both northerly cold winds or southwesterly dry winds could bring a sharp temperature drop or rise in hours. However, this is a remarkable event!

Now, there is a rather short period of colder weather developing into the central Continental US early this week. A positive PNA pattern will trend into a development of a strong upper ridge over the northwest US while a trough digs south along its eastern flank.

If the negative PNA phase of the pattern occurs, the associated weather brings the opposite. 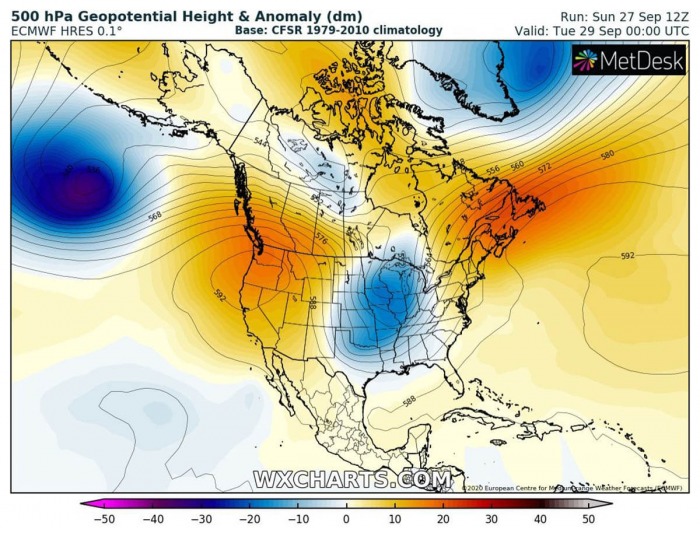 Such pattern across the Continental US typically allows a quite strong cold advection meridionally moving from north to south from Canada.

This time, the cold air mass is forecast to spread across the central Plains and the Rockies on early Monday, and reach the southern Plains and the Gulf Coast by late Monday afternoon into early Tuesday as well. 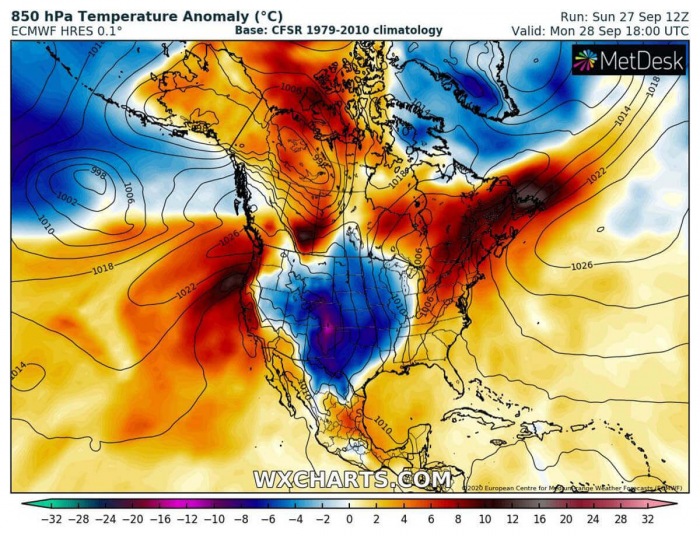 However, the cold pool will be relatively short-lived and vanishes by late Tuesday and Wednesday.

There will be also some potential for severe storms and dangerous excessive rainfall along the main cold front associated with this trough. The cold front brings a lot of rain across part of the Gulf and along the boundary further northeast. 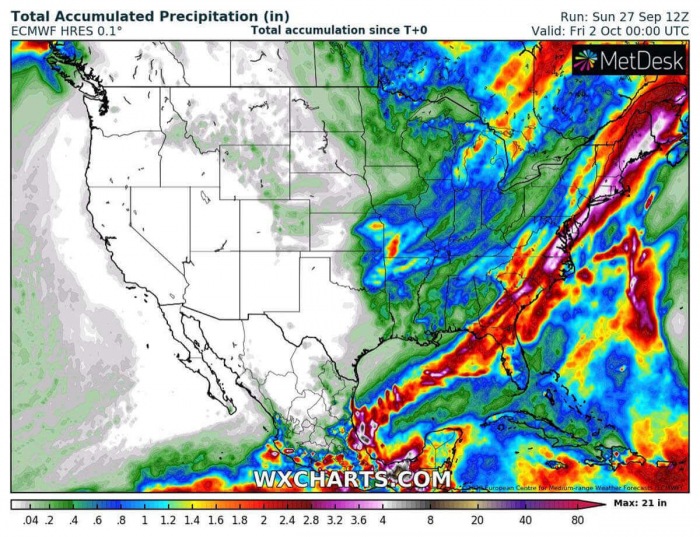 The East Coast could experience 4-8 inches (100-200 mm) swath of rainfall along the front from Georgia across the eastern Carolinas into New York and further across the northeast US.

The major pattern change is forecast for early October

What appears to be a much more significant event is the intense cold outbreak scheduled for start to October. The weather model forecast are trending the pattern to support a cold early start of October. Especially across the eastern CONUS, also the East Coast.

The cold is likely to reach the Gulf Coast again as well, and become much more significant than the first wave this week. The cold pool itself has a strong and persistent connection with the very deep upper core low, advancing south across the eastern United States.

The upper-level ridge over the western US and Canada strengthens through the final days of September while a long-wave trough moves south on its eastern flash. Directly into the east-central CONUS. Rather ideal conditions for a very cold weather event to develop. 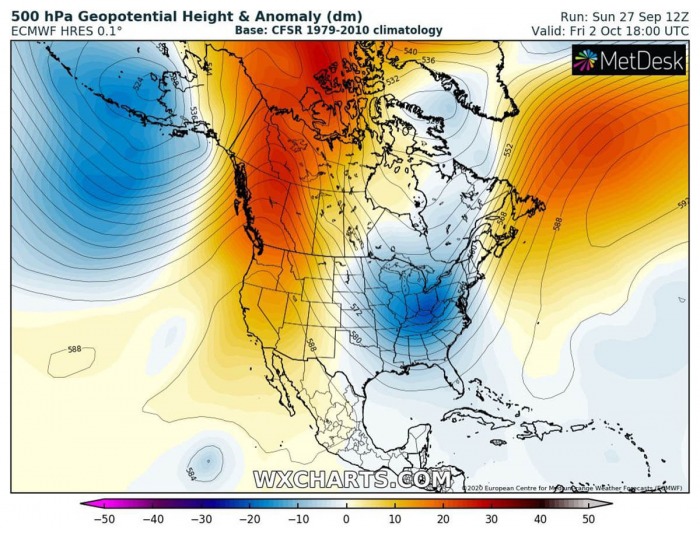 This release a large reservoir of a much below-average air mass, which would be nearly 20 °F below normal for early October. Although there are very low chances for any snowfall, a very cold start of October is primarily expected.

A surface high-pressure system strengthens over the northern US and Canada in the wake of the trough, providing a persistent meridional air mass flow into the US.

Let’s get into some further details on the pattern evolution…

The flow on Thursday will be strong northerly, with a meridional translation of the air mass from the Arctic region of Canada towards the northern US. With strong blocking high to the west, the cold pool has nothing in front to disturb its flow south.

The Rockies will hold the cold to their east. 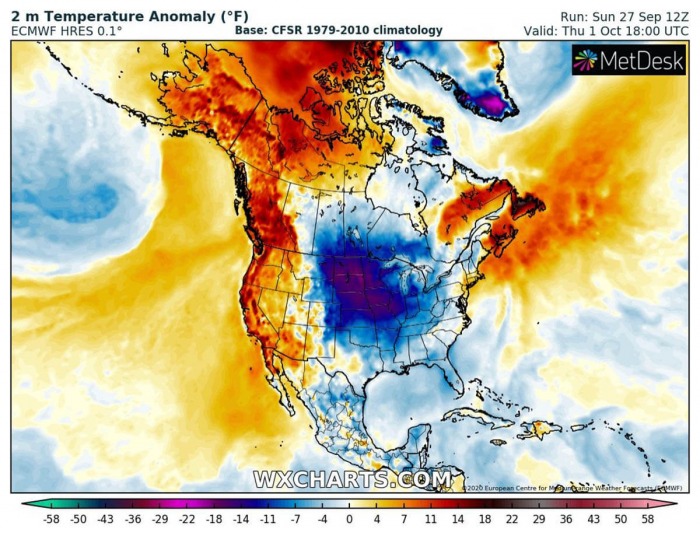 A significant cold blast spreads into the northern and central US on Thursday, with temperatures nearly 20 °F (15 °C) below normal. The cold will be the strongest over Dakotas, gradually spreading into the Midwest. 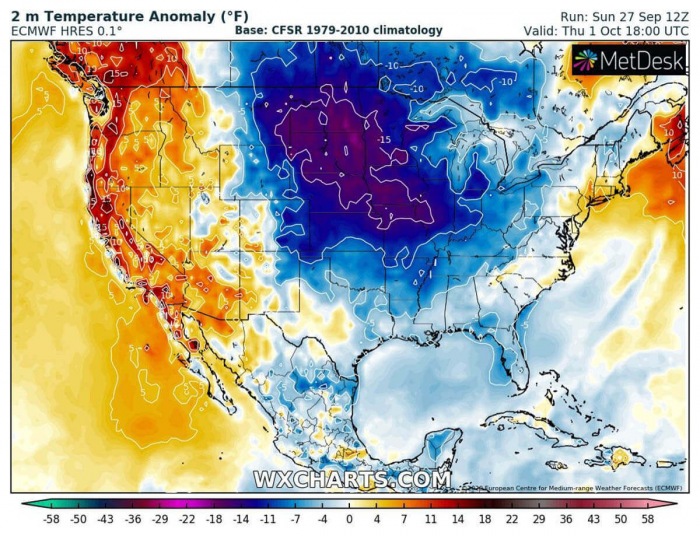 On Friday, the overall pattern does not change much as the western CONUS ridge remains strong. The long-wave trough continues towards the East Coast and the Southeast United States. 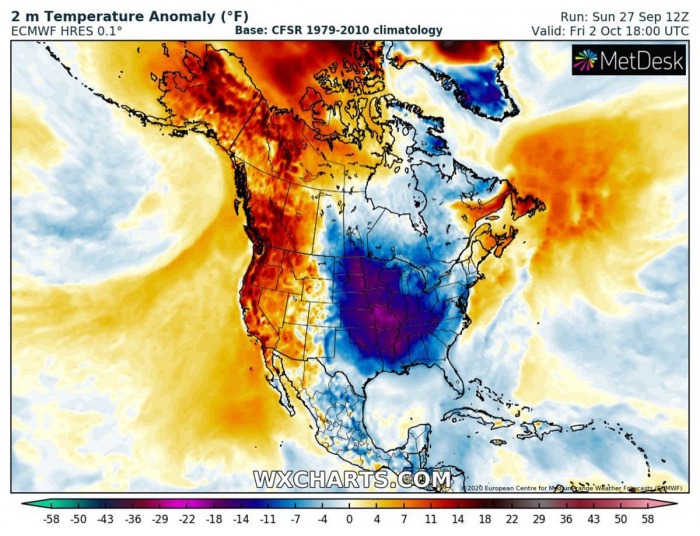 It will be a very cold day across much of the central CONUS, especially over the Midwest and Mississippi valley. The cold also reaches the Gulf Coast sometime on Friday. Daytime temperatures will remain more than 15 °F below early October normal. 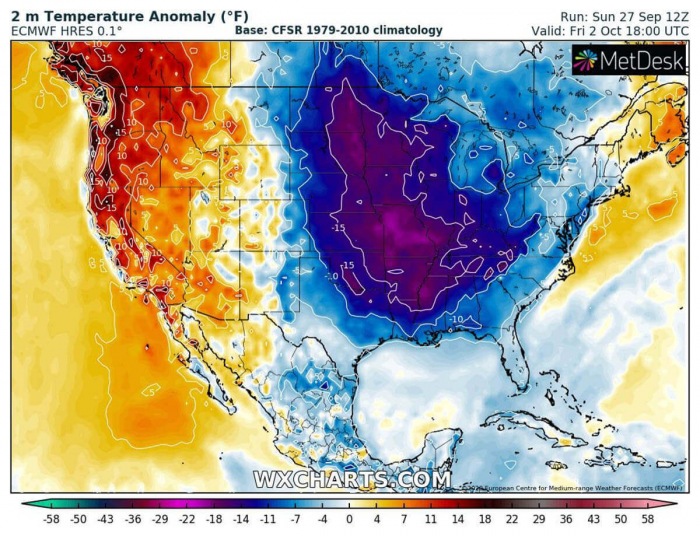 The western ridge will remain strong, this means the cold advection from Canada should persist to its east. Also, it continues spreading south-southeast over the weekend. It appears quite likely that some of this significant cold pool also reaches Florida. 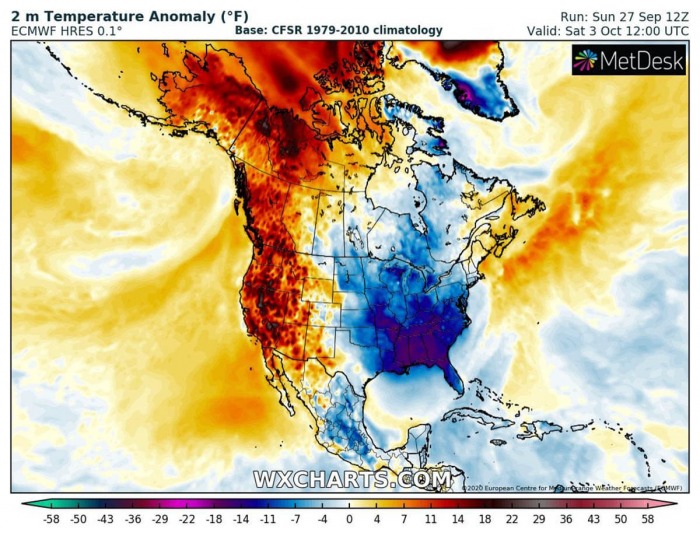 This is rather rare for this part of CONUS, as typically there are no significant cold outbreaks reaching the southeast US so early in the fall season. Remember, there was also another event earlier in September, so this one would follow just two weeks after. 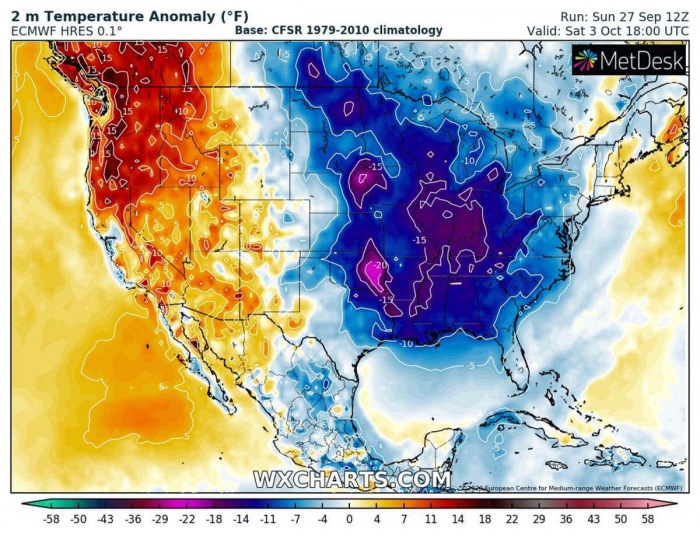 The pattern change is well-aligned with our mid-range 10-15 day forecast issued last week. We were discussing trends in the pattern change over both US and Europe. The forecast wes hinting that a potential strong cold outbreak could spread into the eastern CONUS at the end of September and introduce a chilly start for early October.

It appears likely that another quite significant cold weather outbreak event will spread across the Continental US and the Gulf this fall. A cold start to October is forecast and should replace a warm period lately.

However, the hurricane season is still active. The current MJO pattern is supporting less favorable conditions over the tropical Atlantic.

However, the environment is likely to change in the next couple of weeks as trends are being monitored for the returning tropical activity over the Caribbean region. The pattern are closely monitored, we will keep you updated.