The landfall of Hurricane Delta is now underway on the southern Louisiana coast as a Category 2 hurricane strength. Delta brings life-threatening storm surge, flooding, and hurricane-force winds into the coastal areas. Landfall is occurring near the coastal town of Cameron.

A STORM SURGE is in effect for High Island, Texas to Mouth of the Pearl River including Calcasieu Lake, Vermilion Bay, and Lake Borgne.

Delta becomes the record-breaking storm – it is the 10th United States mainland landfall of the season. There are no years which have had more than 9 landfalls in one season before. 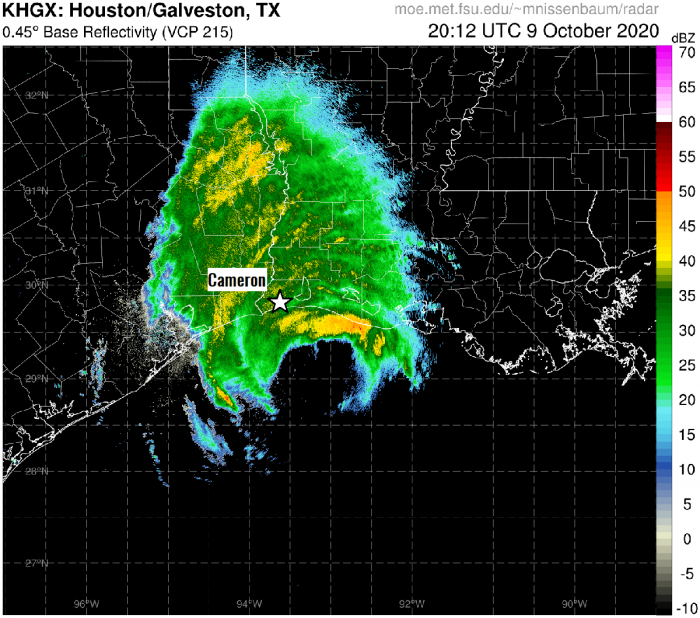 Delta is making landfall very near the hurricane Laura made landfall back in August, so the same areas are strike again. Many areas, including Cameron and the city of Lake Charles, are still in recovery mode from Laura, so Delta will just make things worse.

Both the NOAA Hurricane Hunters data observation and satellite/radar imagery confirm, that hurricane Delta has begun a gradual weakening trend earlier today. The pressure has risen to near 967 mbar, winds have decreased to Category 2 strength. 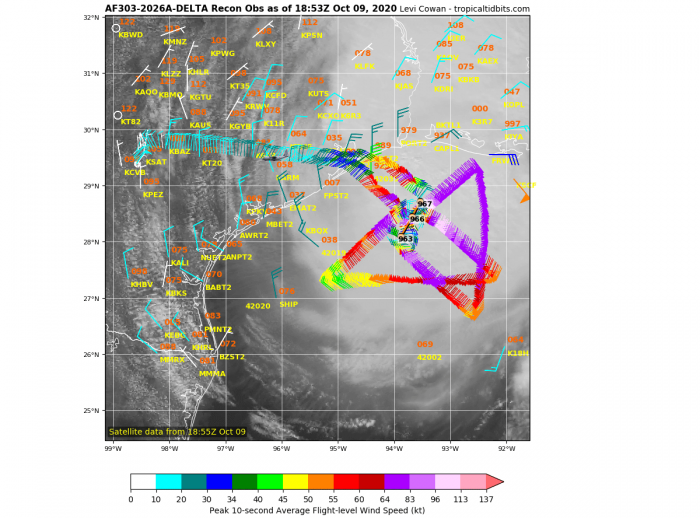 Hurricane Delta, however, has a large wind field, so hurricane-force winds and tropical-storm-force winds are not limited to the immediate eyewall only. A broad circulation and size of the Delta are pushing winds and sea waters into the Louisiana coast.

Infrared satellite image of Delta showed some kind of ‘creepy’ appearance an hour before the landfall started. 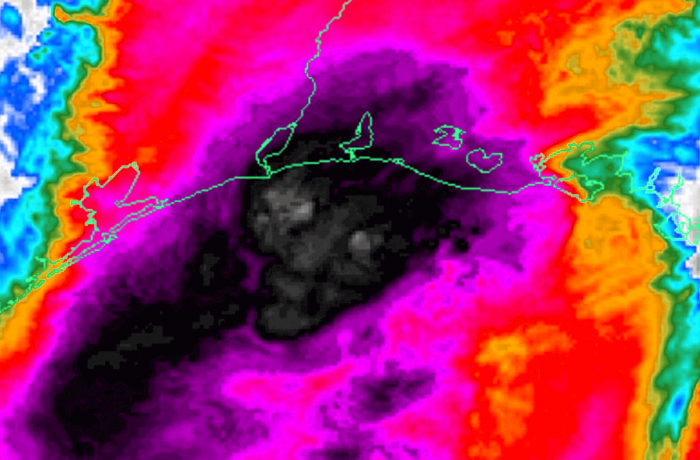 Life-threatening storm surge is occurring and will continue near and east of where Delta makes landfall this evening, and a Storm Surge Warning is in effect from High Island, Texas, to the Mouth of the Pearl River, Louisiana. The highest inundation of 7 to 11 feet is expected somewhere between Rockefeller Wildlife Refuge and Morgan City, Louisiana. 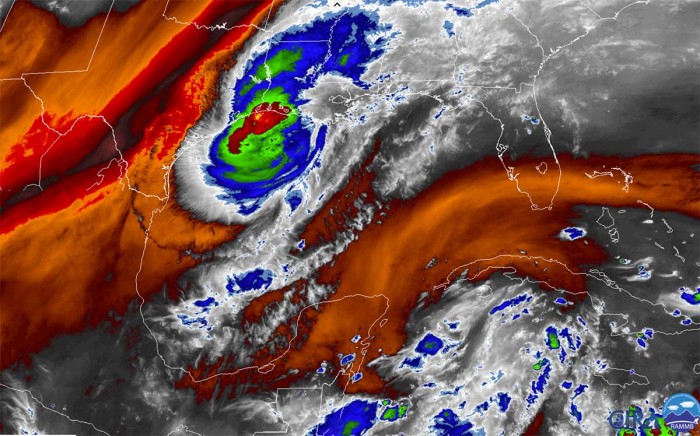 Hurricane Delta will is also forecast to produce up to 15 inches of rain in some areas, which should lead to flash floods.

Here is visible and infrared satellite animation of a Delta’s landfall imminent in south Louisiana coast:

The further movement of Delta remains on track with the previous discussion, see details below…

Hurricane Delta grazed through the Mexican resort areas of Cozumel and Cancun on Wednesday where the storm knocked out power to 266,000 customers and resulted in severe damage.

Hurricanes usually have issues with significant re-intensification over the Gulf of Mexico, after they cross the Yucatan peninsula. But hurricane Delta was still developing hurricane on Wednesday with only a brief time over the land.

This allowed the storm to begin rapidly strengthening again on Thursday. 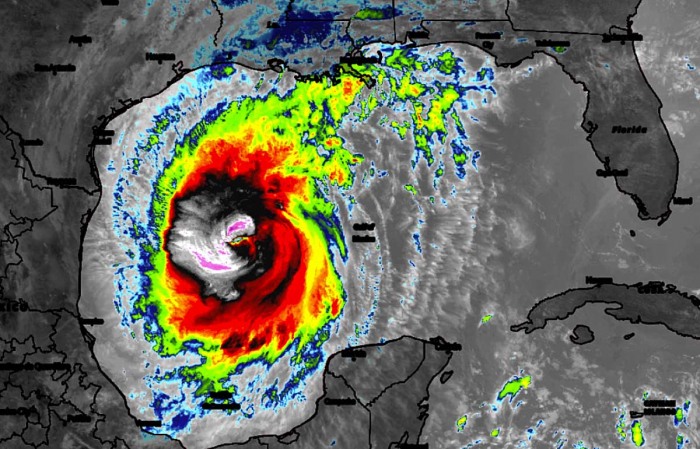 Delta is now on its way towards the historic, 10th landfall in the United States mainland this season. The landfall is expected in southern Louisiana on Friday evening.

Hurricane Delta will move over the *same* areas that have been severely damaged by Hurricane Laura in August.

Much of these areas have still not cleaned up and recovered before Delta arrives. Based on NOAA data, the last time two hurricanes strike western Louisiana in the same year was 1886.

According to the National Hurricane Center advisory, there is…

A life-threatening storm surge is expected near and east of where Delta makes landfall Friday, and a Storm Surge Warning is in effect from High Island, Texas, to Ocean Springs, Mississippi. The highest inundation of 7 to 11 feet is expected somewhere between Rockefeller Wildlife Refuge and Morgan City, Louisiana.

Residents in the warning area should promptly follow the advice given by local officials. The storm surge risk remains high despite the forecast decrease in intensity before landfall since Delta is expected to grow in size.

Heavy rainfall will lead to significant flash flooding and minor to major river flooding in parts of Louisiana Friday and Saturday. Additional flooding is expected across portions of the central Gulf Coast into the Lower Mississippi Valley.

Both satellite observation and NOAA Hurricane Hunters aircraft observation reveal that hurricane Delta is strengthening again now. The satellite imagery indicates an eye is now seen in the cold cloud tops of the central dense overcast. 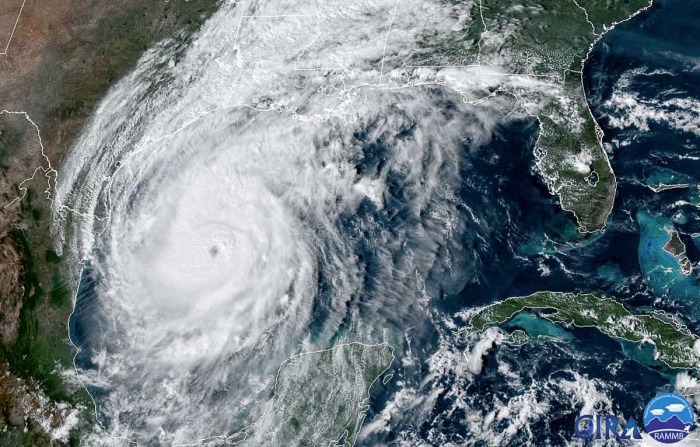 A blend of the flight-level and surface wind estimates give an initial intensity of 100 kt, so Delta has been upgraded to a major hurricane (Category 3). 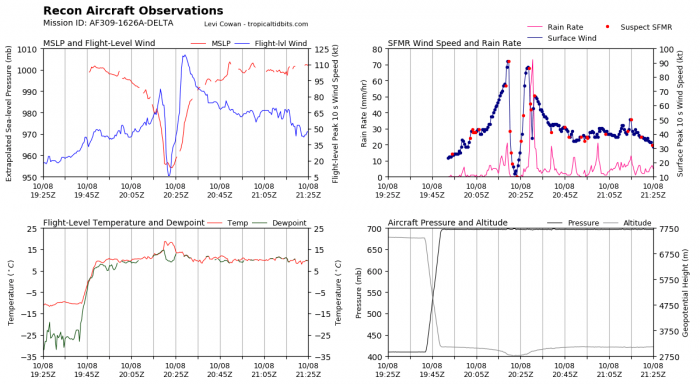 The upper-level outflow ventilation is well-established across all four quadrants, with no sign of any dry air interrupting Delta’s strengthening.

The Advanced Dvorak Technique (ADT) analysis estimates are indicating there are hurricane-force 64-knot winds spread within the 50-75 miles radii across the southeast, northeast, and northwest quadrants of the storm. While tropical-storm winds are extending 90-120 miles around the center. 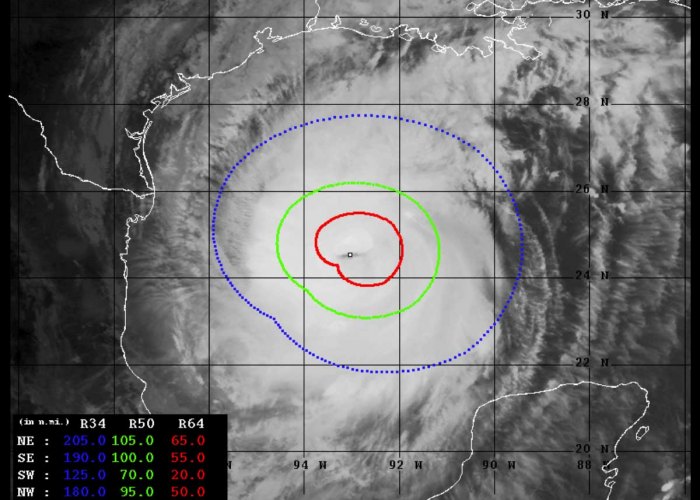 The wind field of hurricane Delta is now significantly expanding, while the explosive development is visible per Dvorak analysis.

The rate of intensification over the past few hours is exceptional. Dvorak analysis is estimating that the central pressure could already be near 940 mbar with sustained winds of 120 knots – that would put Delta into a Category 4 in the Saffir-Simpson scale. The final T number is 6.2. 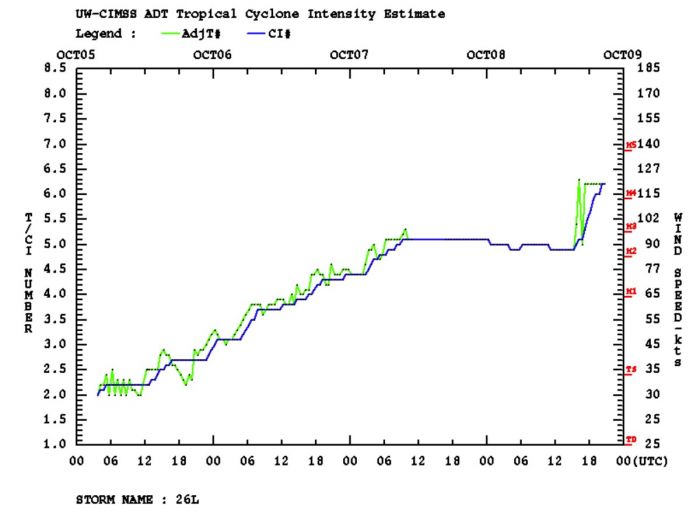 Hurricane Delta has intensified for around 30 knots over the past 6 hours, from 90 knots to 120 knots, based on Dvorak. This is a very explosive increase in winds!

LANDFALL IS EXPECTED IN LOUISIANA

Hurricane Delta will begin turning its track more northward and then northeast towards the United States Gulf Coast on Friday. The National Hurricane Center forecast that Delta will remain a powerful hurricane at landfall, most likely somewhere along the Louisiana coast (or the extreme upper Texas coast) on Friday evening.

Tropical-storm-force winds should begin in coastal areas of eastern Texas and Louisiana by Friday morning. 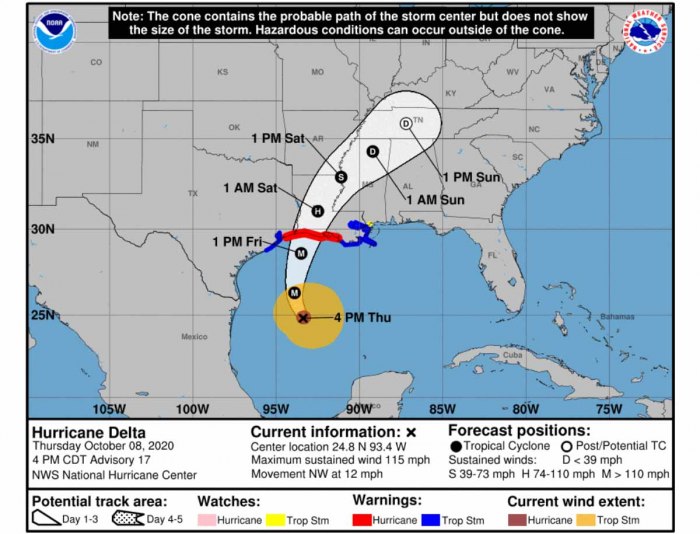 Delta will encounter slightly cooler water temperatures and lower ocean heat content prior to landfall while the global model guidance suggests that stronger southwesterly shear developing over the hurricane on Friday. These factors should limit significant intensification prior to landfall and likely lead to some weakening.

Rapid weakening is expected after landfall.

The video animation below indicates hurricane Delta is re-strengthening again, rapid intensification is underway. Delta is on the way for potentially destructive landfall with severe winds and life-threatening storm surge along the Louisiana coast!

Delta’s storm surge will be dangerous and life-threatening along the Louisiana coast.

The highest storm surge is expected across the immediate Gulf Coast of south-central Louisiana, but also in bays, inlets, and to some degree inland along rivers and bayous. Inundation could reach 7 to 11 feet above ground in these areas, according to the NHC. 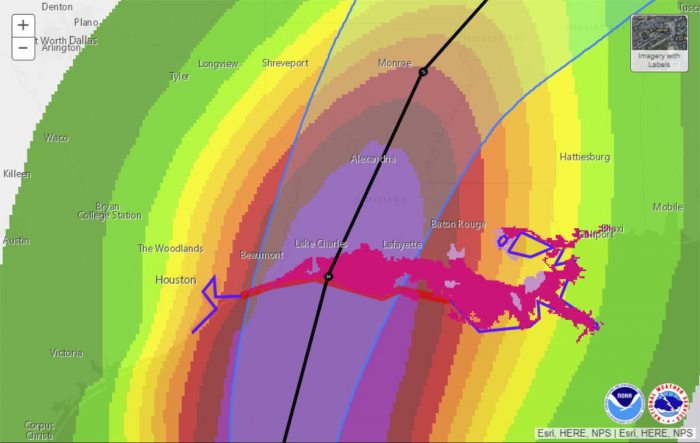 As Delta is on a track similar to Hurricane Laura in August, a dangerous storm surge is also expected over the areas that were affected by Laura.

Based on the NOAA NHC forecasters, there is a life-threatening storm surge is expected near and east of where Delta makes landfall Friday, and a Storm Surge Warning is in effect from High Island, Texas, to Ocean Springs, Mississippi. The highest inundation of 7 to 11 feet is expected somewhere between Rockefeller Wildlife Refuge and Morgan City, Louisiana.”

The strongest winds with Delta are expected to be across south-central Louisiana, but also across the southwest Louisiana and extreme upper Texas coasts. These areas are likely to experience severe structural damage, downed trees, and power outages. 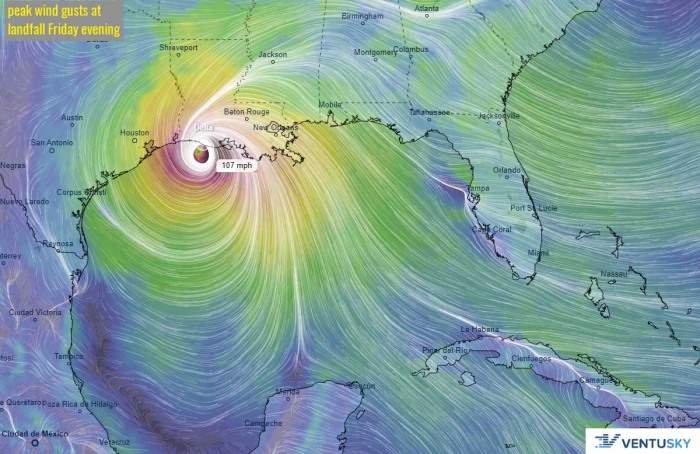 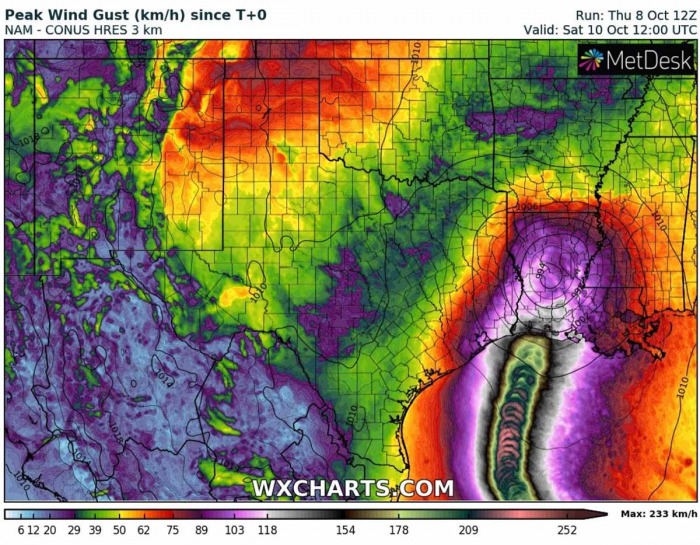 Delta is expected to rapidly weaken after the landfall, moving northeast across Louisiana. However, dangerous hurricane-force winds are still expected to spread well inland over much of Louisiana state through Friday night.

A significant rainfall and flooding threat will develop along the track of hurricane Delta during and after the landfall. Locally 5 to 10 inches (150-250 mm), with isolated 15 inches (400 mm) possible are expected with Delta across the southwest and south-central Louisiana. Flash floods and river flooding are expected. 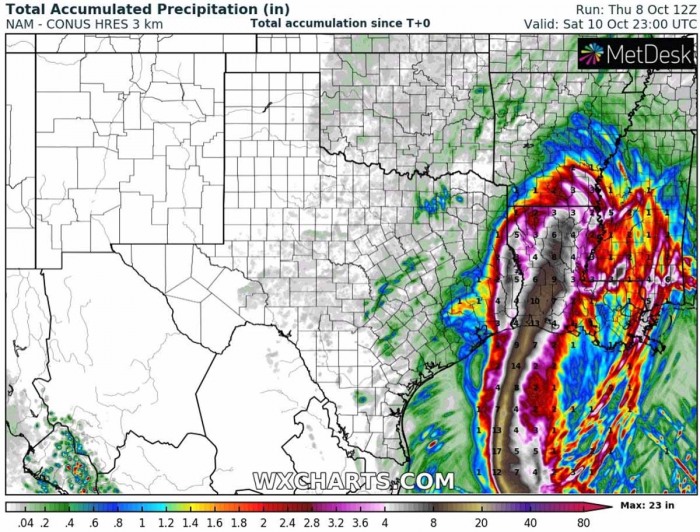 Further inland, 4 to 10 inches (100-250 mm) are likely across parts of extreme eastern Texas, southern Arkansas, and also across the western Mississippi.

ANOTHER WAVE IN EASTERN ATLANTIC

There is now some tropical activity also appearing in the far Eastern Atlantic, as a new tropical wave ejected the West Africa coast. 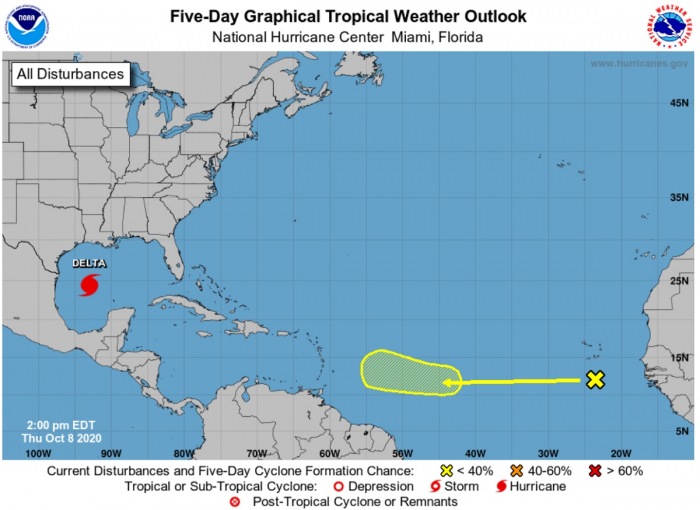 A vigorous tropical wave located a few hundred miles south of the Cabo Verde Islands is producing a large area of disorganized showers and thunderstorms, along with tropical-storm-force wind gusts.

This disturbance is expected to move generally westward at about 15 mph over the tropical Atlantic for the next several days.

The National Hurricane Center (NHC) is forecasting there is a 20 % chance for a tropical depression formation over the next 5 days.