After a short break, another large trough is expected to develop over much of the European continent. The upcoming dynamics result in the pattern change and cold weather is forecast to start this weekend and is likely to extend through mid-October.

Europe is getting another, more dynamic pattern over the next 5 to 7 days. Trapped in between strong upper-level ridging (one over the Atlantic and another over Russia), a large upper low/trough dominates our weather in the coming days and next week.

The upcoming pattern will allow the meridional, northerly cold flow to maintain across the continent. The cold period is forecast to extend also across the next week, so through mid-October.

The pattern change this weekend should promote a strong North Atlantic ridge to block any zonal, westerly flow towards our continent. To its east, a large and deep upper trough will intensity and dig south across western and central Europe towards the Mediterranean. 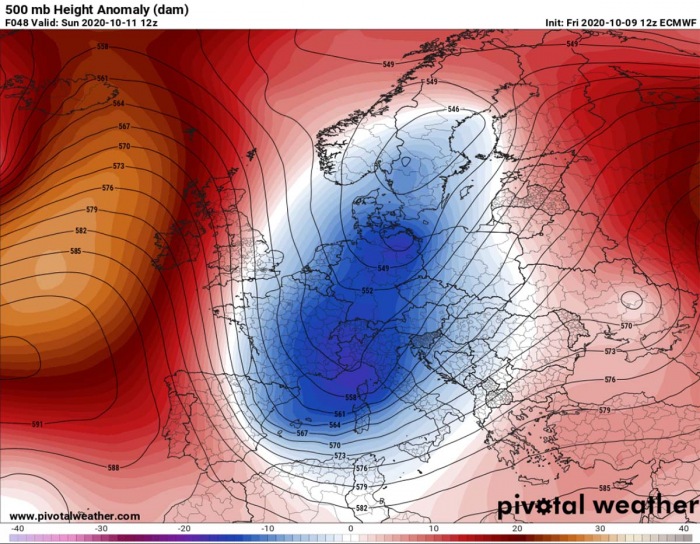 Therefore, cold temperatures will overspread these parts of Europe and bring much colder weather. Locally with cold winds and relatively low windchills as well. Daily temperatures should stay around 10 °C below normal. 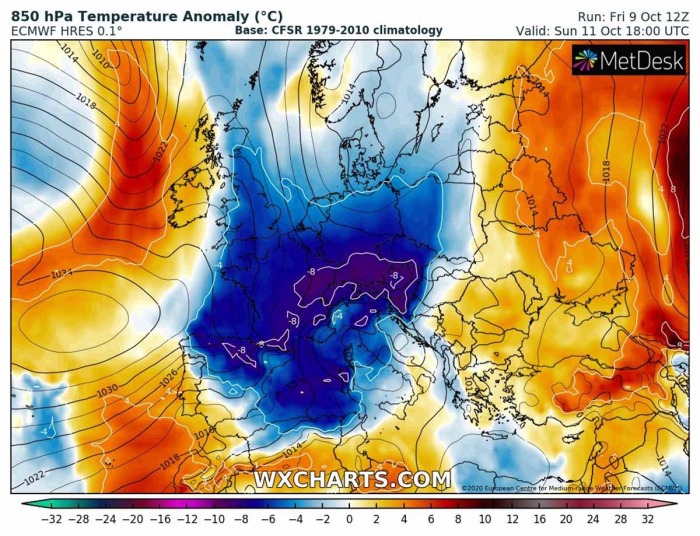 Through mid-week, the large upper trough over Europe changes as models are hinting a split into two cores. One would push into southwestern Europe while the second one will push into eastern Europe. This evolution is partly supported by the North Atlantic ridge expanding while strengthening towards the Arctic region as well. 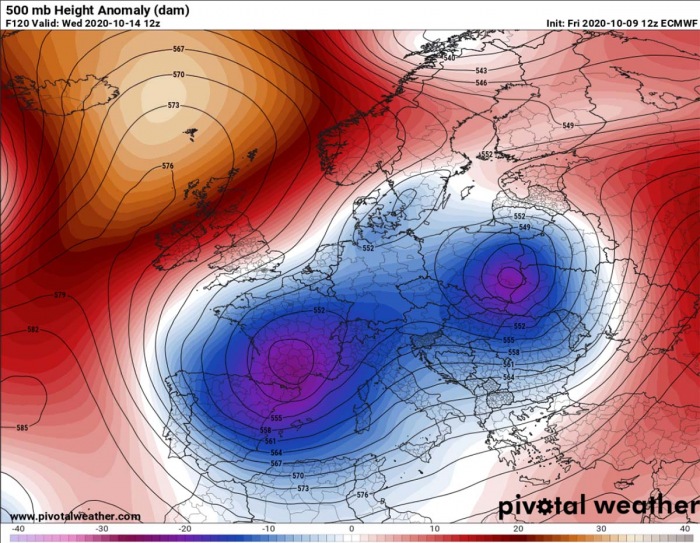 This pattern should also contribute to some temperature change over the continent. The cold is forecast to spread also into eastern Europe, as it will be limited to west-central parts of the continent until then. 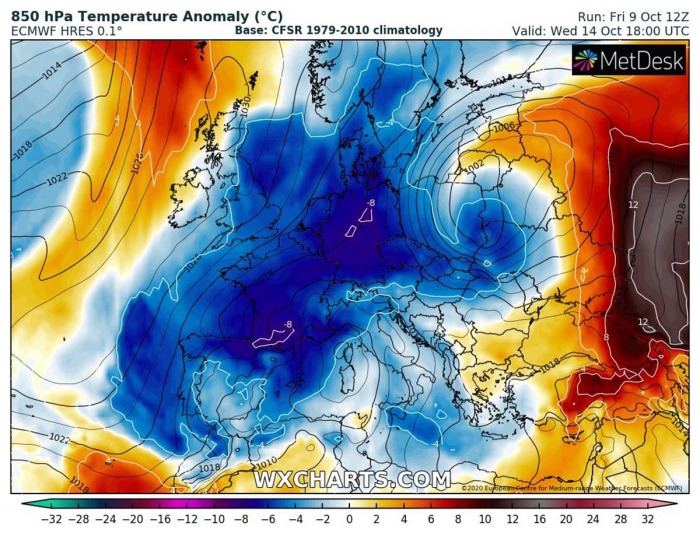 The cold pool is forecast to expand across the large part of Europe, contributing to temperatures 8-10 °C below normal in some regions. Both upper lows should maintain the coldest weather in Germany and France.

Looks like the forecast cold will likely persist through mid-October, as the pattern seems to be hinting at this evolution. It is well supported by mid-range ensemble model forecasts. 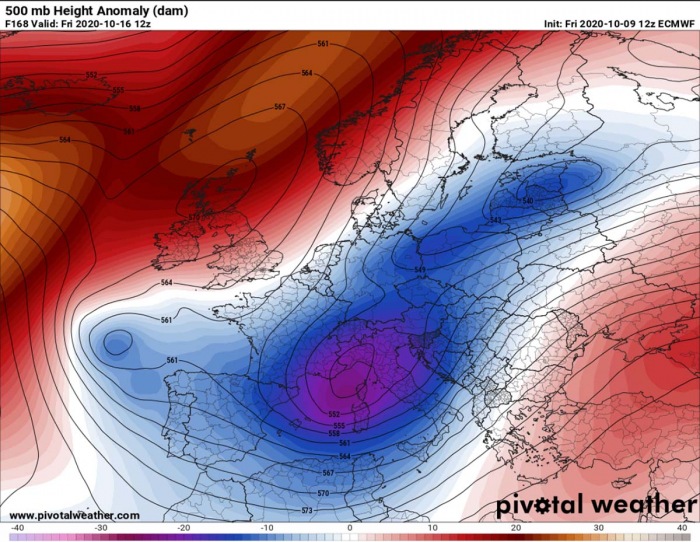 Actually, after the large core over Europe splitting through the mid-week, it re-emerges back later next week, so the cold is forecast to intensify and extend into the weekend days. 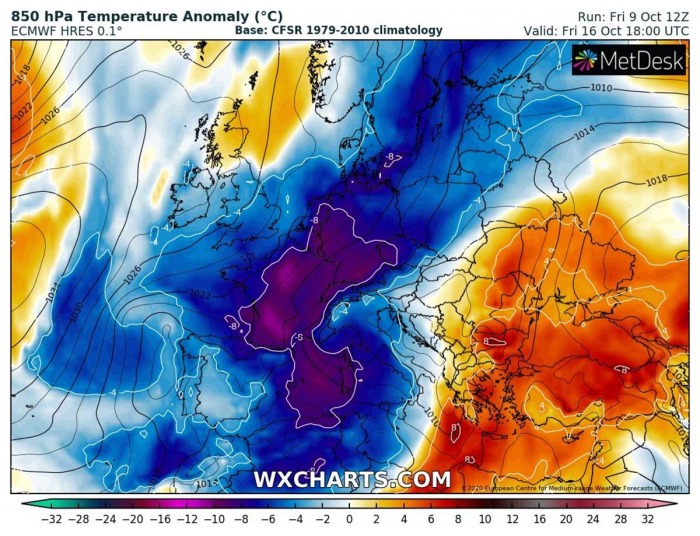 Significantly colder temperatures could re-emerge again. Indeed, such a time distance still has some uncertainties regarding the intensity and the exact position of the strongest cold advection.

Here is the animation of the persistent cold pool with relatively strong cold advection through mid-October. Graphics are provided by Wxcharts.com.

Significant changes in temperatures typically come after a strong frontal system. The first brings a lot of rain (and snow in the Alps) this weekend. As the Mediterranean region still has quite warm seas, there will be a lot of moisture advecting towards the north. 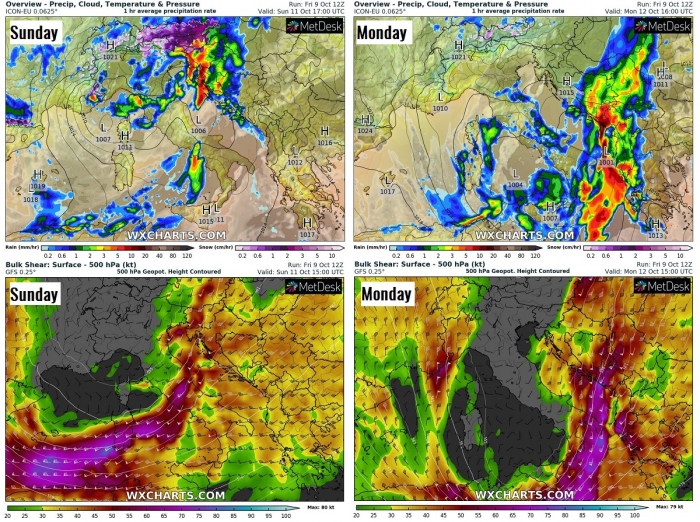 The frontal system should introduce some severe weather across central Europe, northern Mediterranean, and western Balkans, including some severe storms on Sunday and Monday. 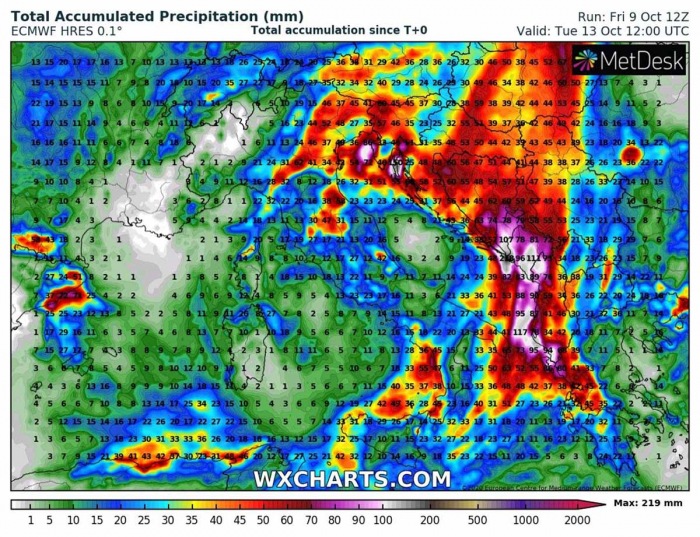 Favorable unstable and strongly sheared conditions along and ahead of the front on Monday should support a severe weather outbreak from south-central Italy into west-southwest Balkan countries. Including supercell storm with large hail, severe winds, lots of rain with flash floods, and possibly tornadoes.

Another frontal system is potentially coming next Friday, in response to a strengthening pattern and re-developing large upper trough. Southwesterly jet would allow strong warm advection across the Mediterranean and could support severe weather and especially a lot of rainfall.

As mentioned above, the overall pattern change is calling for a colder period ahead.

The attached GEFS model forecast charts for different parts of Europe that all these regions will be within the cold pool for the day, mostly through the whole next week. The cold will be the most pronounced over western and central Europe, especially over France – with the 5-day temperature anomaly nearly 10 °C colder than average. 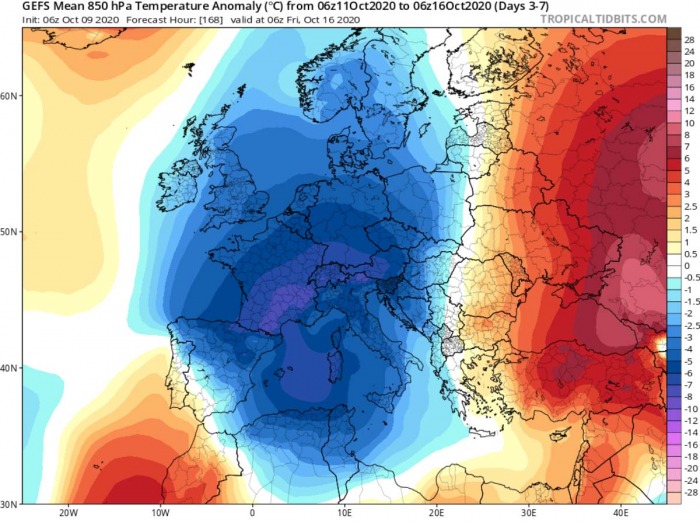 The cold intensity and duration are usually best visible on Meteogram charts, revealing if the potential cold pool is just a short or covers a longer period. This time, the cold wave will remain for days. 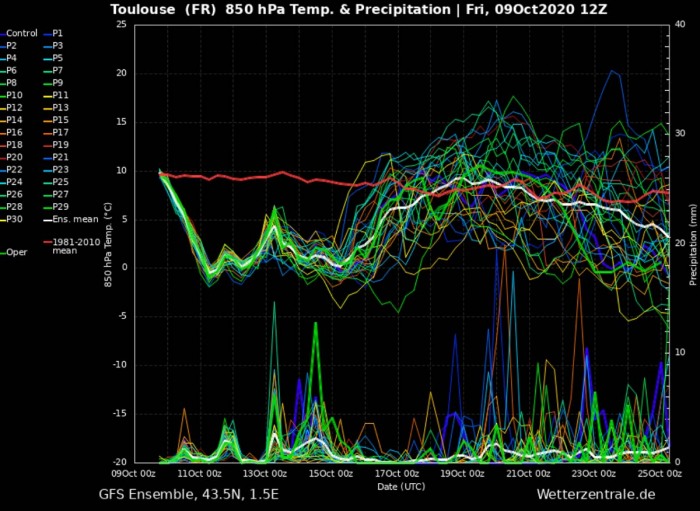 The reason this cold pool extends through a longer period is mainly in the trapped upper low/trough over Europe, so hardly any warm advection is seen to interrupt the cold advection over the continent. Below’s Meteograms are for Berlin (Germany) and London (England), temperatures should remain below the long-term average until the 20th. Graphics are provided by Wetterzentrale.de. 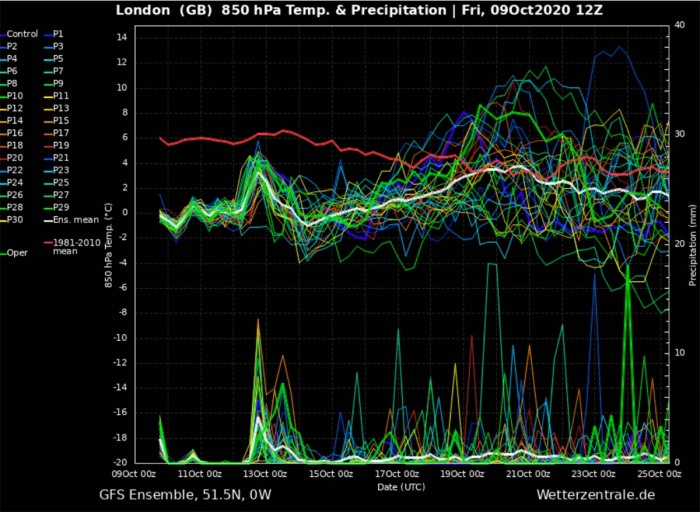 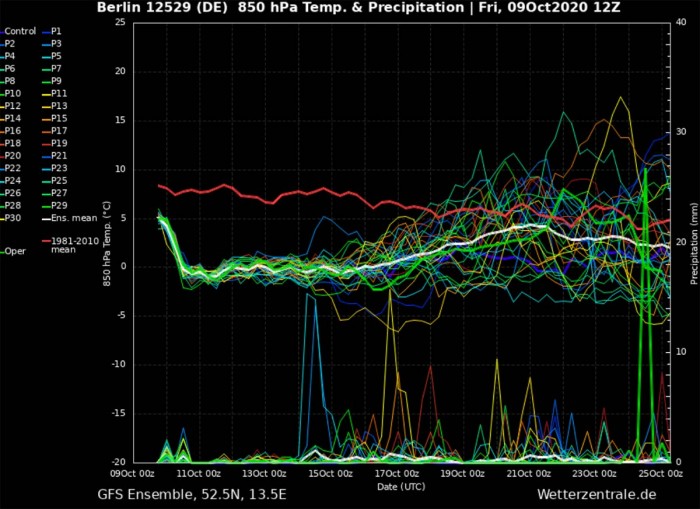 The cold weather patterns also develop into central Europe and western Balkans, attached is the Meteogram for Ljubljana (Slovenia). A sharp cold front is expected on Sunday, bringing temperatures down for around 10-12 °C compared to Saturday (roughly 24 hours drop). 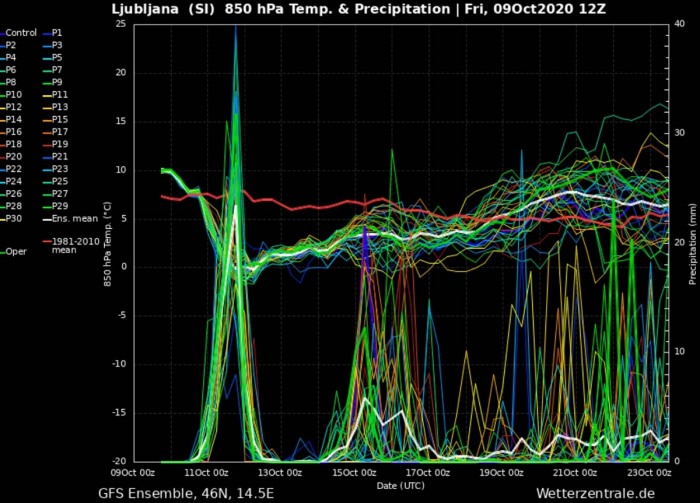 A strong cold front will also bring a lot of precipitation into parts of the northern Mediterranean, including some severe weather along the northern Adriatic Sea which remains quite warm.

NEAR 1-METER OF FRESH SNOW IN THE ALPS

The pattern in mid-October is typically quite cold already, so the overall temperature conditions start to support snowfall into lower elevations. It will be a lot of snow coming for the east-central Alps over the weekend through the early days next week. Close to 1-meter of fresh snow seems likely. 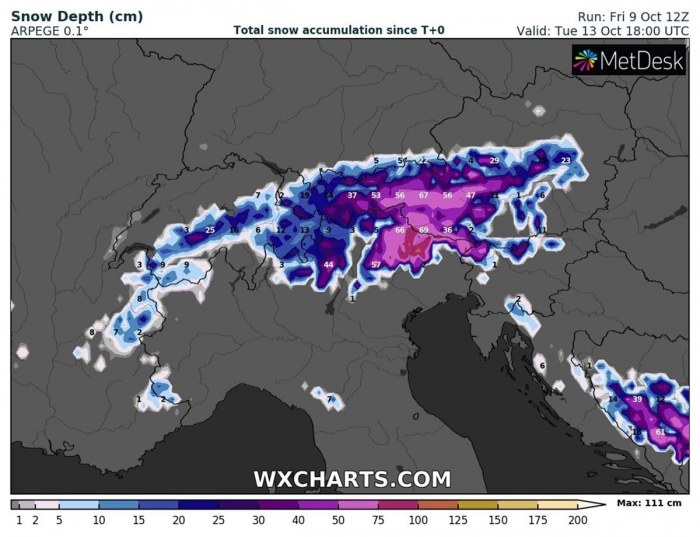 There will also be some chances of snowfall coming to lower than 1000 m above sea level, precisely along with the western Balkan peninsula’s Dynaric mountain range. Some fresh snow will, therefore, be possible across southern Slovenia and western Croatia.

Potentially close to half a meter of snow over Bosnia.

See also – the last cold period over Europe was in the final days of September:

Fall arrival to Europe: summer weather replaced with cold and lots of rain, snow in the Alps (Sept 20-25th, 2020)