Betelgeuse is one of the largest nearby stars. It is a variable star, meaning that its brightness changes at regular intervals. But the current drop in brightness is special because it is the largest drop in all known records.

Betelgeuse, is classified as a red supergiant star, located in the constellation Orion, the Hunter. It truly is a giant, as its radius is about 900 times that of our Sun. It is one of the largest stars that can be seen with the unaided eye. Betelgeuse lies at an approximate distance between 640 and 724 light-years from Earth. If it were placed at the center of our solar system, the star’s surface would engulf the orbit of Mars, and come within the orbit of Jupiter. The image below shows the size comparison of Betelgeuse and our Solar system. 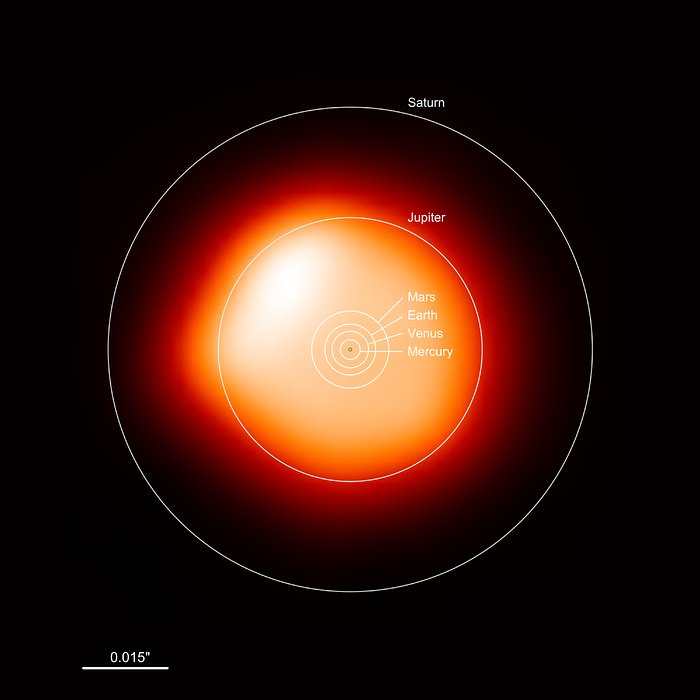 Betelgeuse is a pulsating variable star, which means that it changes its brightness in semi-regular cycles. Brightness of a star is called a magnitude. The magnitude scale is reversed, meaning that the brighter the star, the lower the magnitude. A magnitude 1 star is brighter than a magnitude 2 star and dimmer than a magnitude -1 star. Magnitudes can go into negative values and usually indicate very bright stars. Betelgeuse can shine very bright at magnitudes up to 0.2 and can get dimmer, with magnitudes around 1.3. Remember, the lower the magnitude, the brighter the star shines. The star has begun its usual dimming cycle in December 2019. The process has been gradual as usual. But each time astronomers observed the star through December it seemed to be less bright, going beyond the known record lows. The graph below from AAVSO (American Association of Variable Star Observers) data, shows the magnitude of Betelgeuse over time and its regular cycles. The last dimming cycle is quite unusual as the star is at record low brightness, and this dimming is significant enough to be seen by the unaided eye. The latest data has the magnitude of the star at 1.5, which is 0.2 magnitudes dimmer than the previous known record of 1.3 magnitudes in 1927 and 1941. 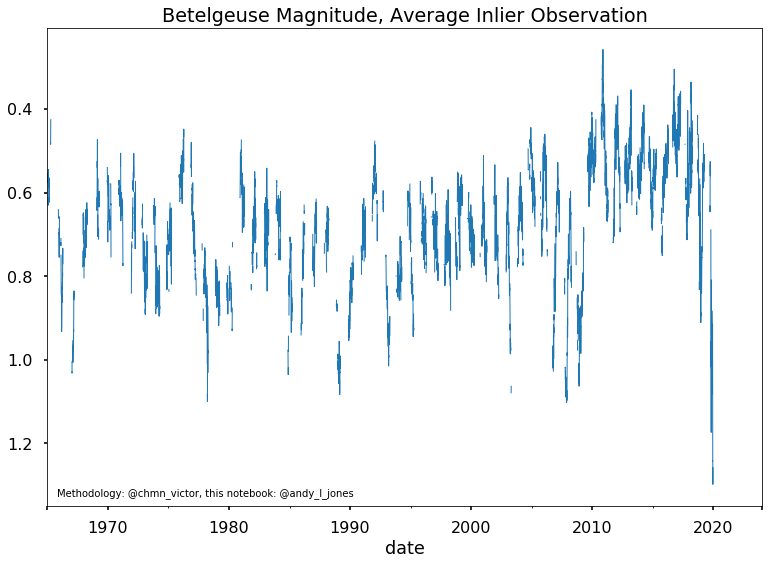 Not even stars live forever. Betelgeuse is already approaching its death. The age of Betelgeuse is estimated at around 8 million years. That is very young for a star, but red giants like Betelgeuse burn bright and due to their size, they quickly burn their fuel and then collapse and explode away in a spectacular supernova. Given its mass and size, Betelgeuse is expected to be near its collapse and the eventual supernova explosion, which is why this dimming has gained a lot of attention, as it could indicate that something might be in the works since this is not the usual behavior for the star. If the star would explode in a supernova, it would truly be a show in the sky, as the explosion would shine as bright as the full moon and would even be visible during the day. The image below shows the size/brightness/temperature comparison for some of the most well-known stars in the night sky. 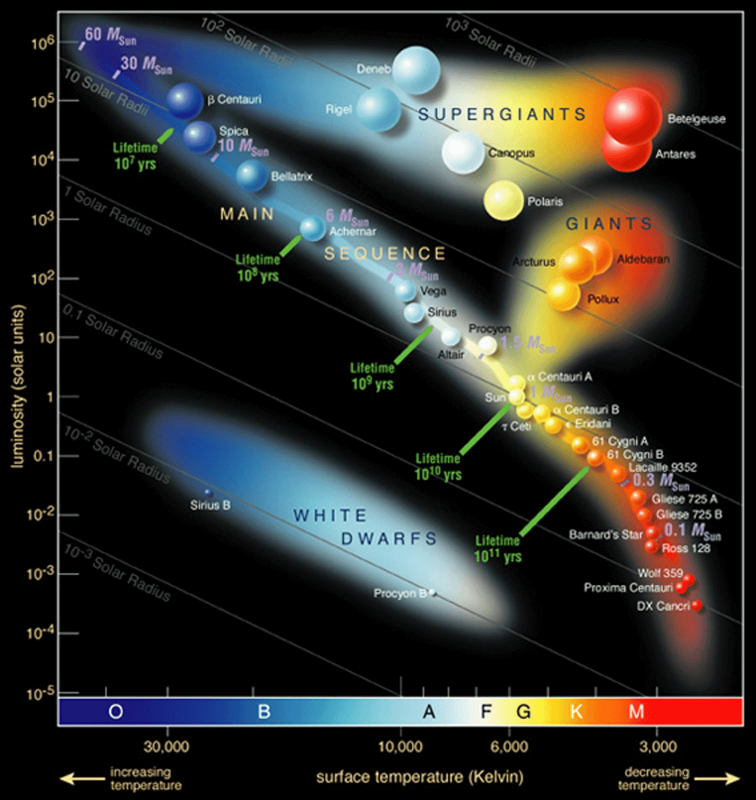 Stars are usually always seen as points of light, even when viewed by the most powerful telescopes. They are either too far away or too small to be imaged directly. But, Betelgeuse is an exception, as the star is big enough and close enough to be imaged directly. Below is a direct image of Betelgeuse, taken by the Atacama Large Millimeter/submillimeter Array (ALMA). This is the first time that ALMA has ever observed the surface of a star and this first attempt has resulted in the highest-resolution image of Betelgeuse available. 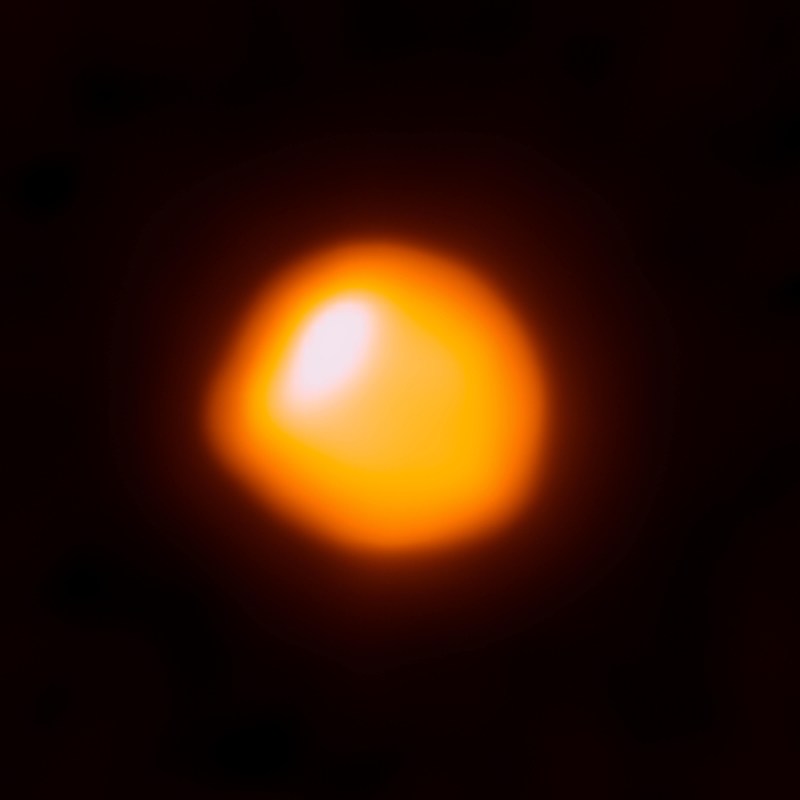 This composite below also shows a zoom towards Betelgeuse, and the sharpest image ever of this supergiant star, which was made by the Very Large Telescope (VLT), owned by the European Space Organisation (ESO). You can see the location of Betelgeuse in the constellation of Orion, the Hunter.

Everybody is curious to know what will happen next with Betelgeuse. Will it go supernova and create a celestial show of a lifetime? Yes! But will that happen within our lifetime? Nobody knows! Betelgeuse will explode as a supernova at any time between today and the next 100.000 years. It is really hard to tell with high accuracy what exactly is going on inside the giant star. The distance between the star and the Earth is around 700 light-years. That means that it takes light 700 years to get from Betelgeuse to Earth. So in all fairness, the star perhaps already went supernova, but the light from the explosion has just not reached us yet. In case we do witness a supernova explosion, we are at a safe distance so it will not cause any harm to Earth. But planetary systems within 50 light-years of Betelgeuse are in a lot of trouble.

We will keep you updated on any important further development. While you wait for more updates, don’t miss the latest long-range forecast, covering January and February 2020: