On January 12th, 2020, a phreatomagmatic explosion began at Taal volcano, in the Philippines. It was a violent, but short-lived eruption. Now, scientists fear, that something bigger might be coming from Taal.

Below is a satellite animation, showing the growth and spreading of the large ash cloud during the first eruption on Sunday.

The initial phreatic eruption that began on Sunday has, for now, calmed down. You can check it out in our info-article below, which also contains some basic need-to-know information about the volcano itself.

The eruption has slowly ended over the next day, but the volcano is far from going back to sleep. Activity in the Main Crater in the past 24 hours has been characterized by steady steam emission and infrequent weak explosions that generated white to dirty white ash plumes 50 to 600 meters tall and dispersed ash southwest of the Main Crater. A total of 5 discrete weak explosions were recorded by the Taal Volcano Network. Below is the image of current status at Taal, taken by the Philippine army during an aerial survey of the volcano. 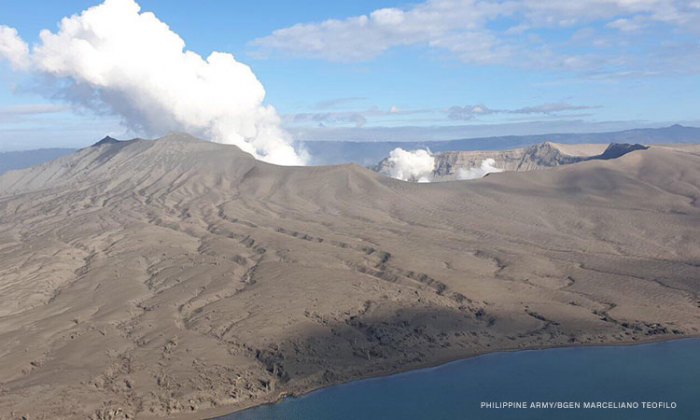 We were able to get close to the main crater of Taal Volcano this morning and this is what we saw.

I filmed this with my iPhone. pic.twitter.com/iCYASX3F44

Steam and smoke is not the only activity at Taal volcano. Earthquakes have been increasing under and around the volcano. The Philippine Seismic Network plotted a total of 666 volcanic earthquakes since 1:00 PM, January 12, 2020. 174 of these registered at magnitudes M1.2 – M4.1 and were felt at Intensities I – V. Since 5:00 AM on January 17, 2020, until 5:00 AM today, there were 32 volcanic earthquakes plotted, registered at magnitudes M1.5 -M3.3. The Taal Volcano Network recorded 876 volcanic earthquakes including 6 tremor events and 20 low-frequency earthquakes. Such intense seismic activity likely signifies continuous magmatic intrusion beneath the Taal edifice, which may lead to further eruptive activity.

Around the volcano, we also have fissures (cracks), some even 1-3 kilometers long, starting to appear around the volcano and also further out. The highest amount of these cracks can be found south and west of the volcano. The image shows the location of the cracks, mostly towards the southwest. New cracks were reported today, and the existing ones have further spread apart by a few centimeters. 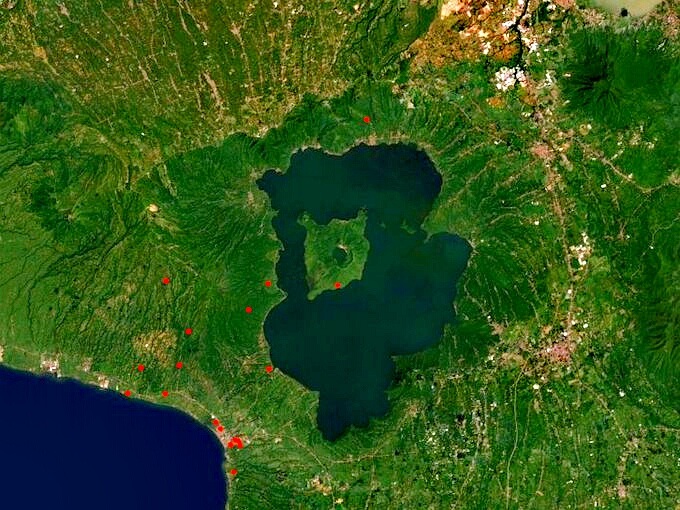 WATCH: Philippine seismologists say there have been more than 630 earthquakes since Taal erupted on Sunday. Existing ground fissures have widened by a few centimetres. This crack appeared in a road in Batangas following the eruption. #TaalEruption2020 #TaalVolcano pic.twitter.com/C7gCqicIk6

One of several fissures that formed in the mainland after the series of volcanic quakes, this one in Brgy. Sinisian, Lemery Batangas. Phivolcs say, the appearance of cracks indicate the active movement of magma, meaning a hazardous explosive eruption remains a possibility. pic.twitter.com/ePPblQiDY2

These large cracks in the ground are a clear sign of powerful processes currently ongoing under and around the volcano. Officials have noted that all this activity points at increasing pressure under the volcano, as more magma and molten material rises upwards. That can be seen directly on the surface as “inflation”, or rising of the ground as magma pushes upwards. So far, up to 50cm of uplift has been recorded, which is quite significant. This ground deformation has affected the water levels of the lake around the Taal island, reducing the supply of water to the Pansipit River, drying it out. Sulfur emissions have also increased from the volcano, which can indicate that magma is rising closer to the surface. The Taal lake water level has also begun to lower.

First processings of the latest #Sentinel1 acquisitions over the #TaalVolcano showing complex deformation and important amplitude changes. Using the DIAPASON and COIN services on @esa_gep. pic.twitter.com/WEQushquA7

Near Talisay Municipal Hall. Half a meter uplift brought about by the volcanic earthquakes related to the #TaalVolcanoEruption #TaalEruption2020
Credits to the owner of these photos. pic.twitter.com/NYRujMn3lt

We created an image that shows the earthquake locations, colored by depth. We can see that most earthquakes are occurring in the SW part, where also most cracks have appeared.

Possible scenarios: It is possible that the activity will slowly reduce, and the volcano will go into a more quiet mode for a few weeks or months, before resuming again. Another possibility is that the activity will continue until a large explosive eruption happens. Taal is capable of large explosive eruptions. In the worst-case scenario (altho unlikely), we get one shorter lasting, but large explosion, powerful enough to cover a large area of the country under ash, and releasing enough sulfur aerosols into the atmosphere, to actually cool the Earth for a year or two. Similar to the Pinatubo eruption in 1991. The more likely scenario is that Taal has a series of moderate explosive eruptions, lasting from one month to six months, but still covering a large area around the volcano with ash. Below is the current exclusion zone, where life-threatening conditions can occur during an eruption at Taal.

I think what they are saying is that you will DIE if you are within #Taal's 14-17 km radius DANGERzones.

Phivolcs advised public on Jan14 NOT inside the danger zone bec of the "possible pyroclastic density current," or fast-moving flow of hot lava blocks. https://t.co/oLK49z5e7m pic.twitter.com/SCqVRdxXDu

We will keep you updated on any important further development. While you wait for more updates, don’t miss the strong high-pressure system developing over Europe: