Surely you’ve heard of the sometimes major to giant sea waves in Nazare, Portugal? Our reporter Albert Russ planned his trip to the famous Nazare with the main goal to see the giant waves. He was carefully watching the forecast charts for the North Atlantic storm #Dennis, made a quick decision, got the airline tickets and fly to the place. What we will see, the decision was perfect! Albert got numerous spectacular photos of the giant 15-20 meter waves, and most importantly he had simply perfect light conditions for great photo sessions! And indeed lots of fun! He stayed in Nazare from Friday (Feb 14th) evening until Tuesday (Feb 18th) noon and around 4000 photos.

Albert Russ is a Slovakian photographer and was kindly reporting us his great set of photos from the scene – see his work at Albert Russ Photography. See the photographs of the giant waves below.

(We are sharing Albert’s story below) 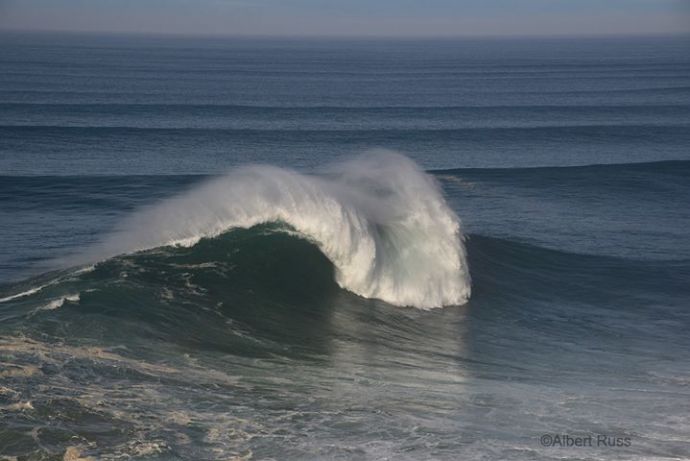 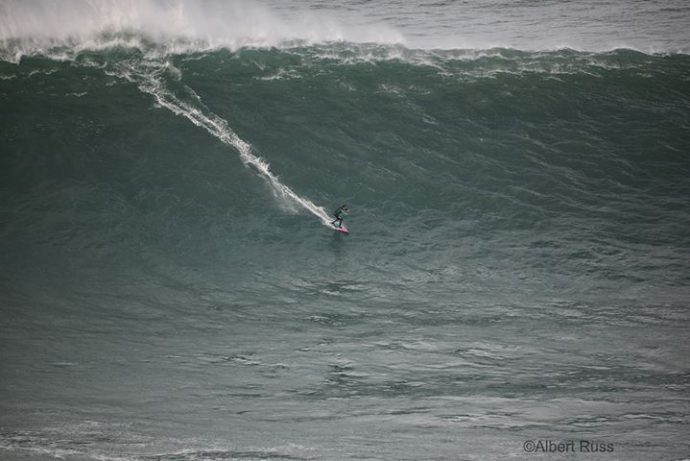 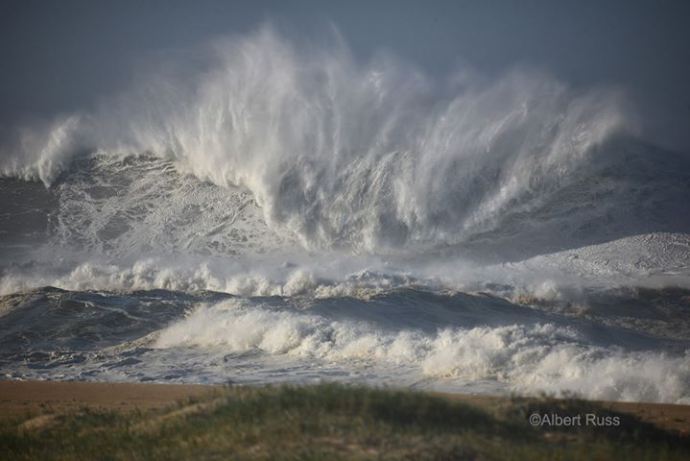 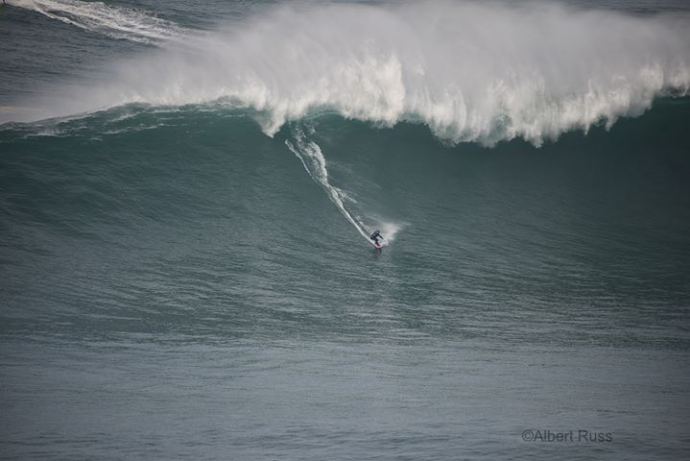 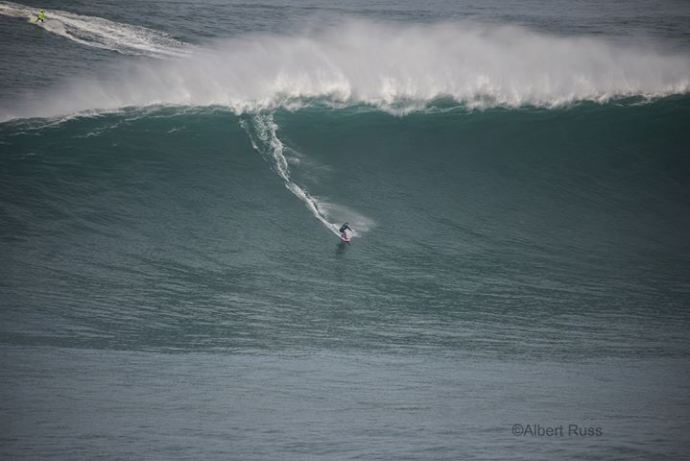 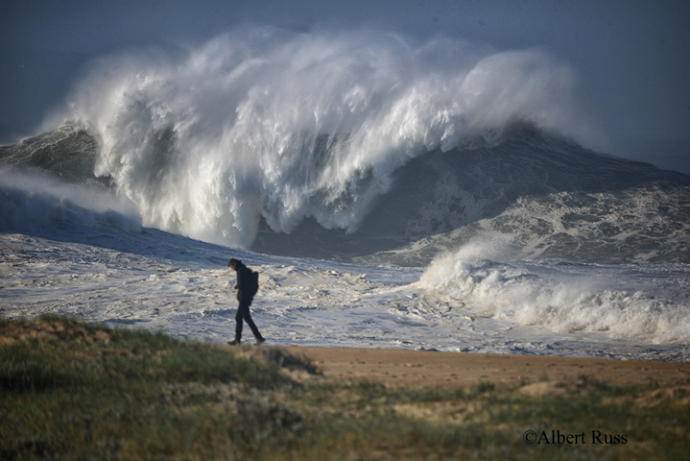 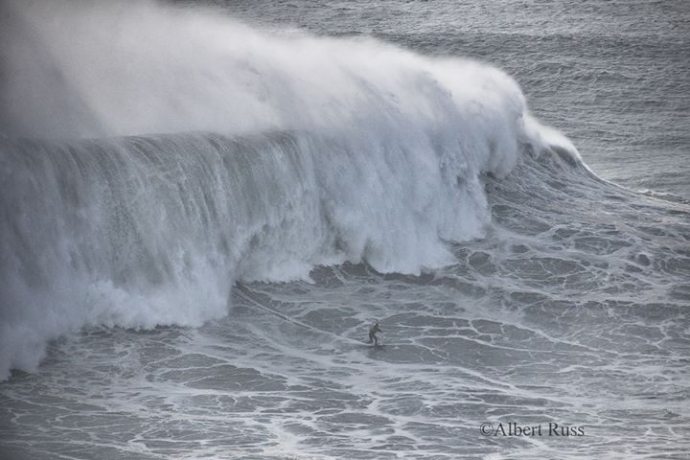 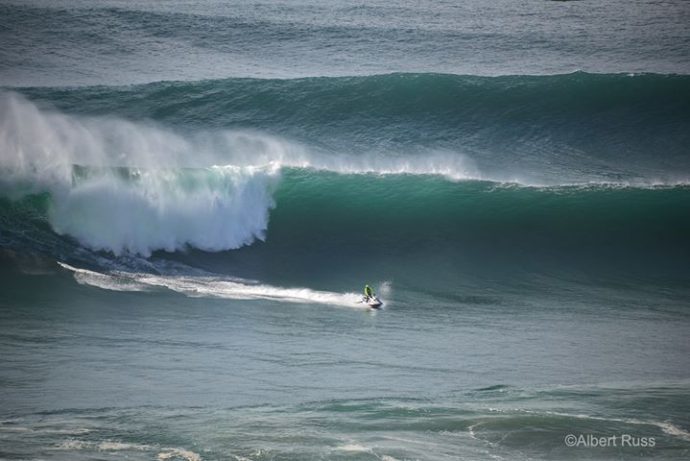 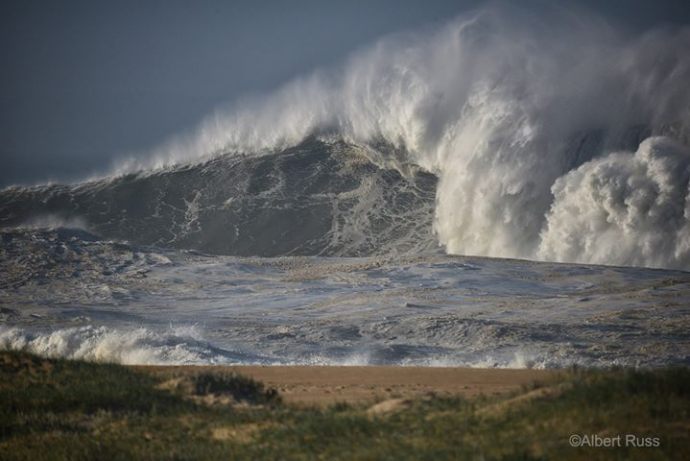 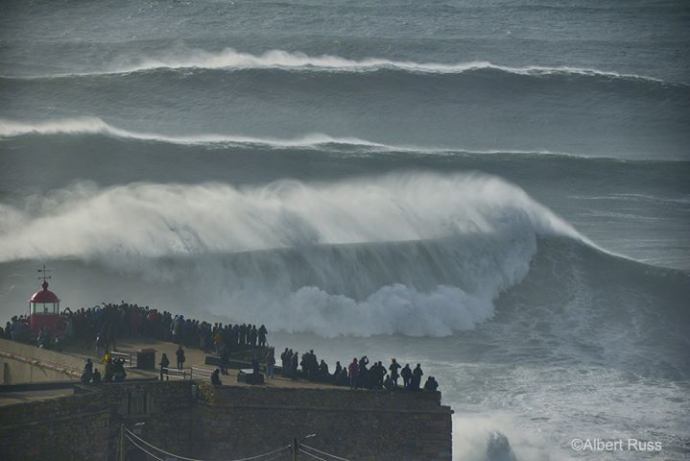 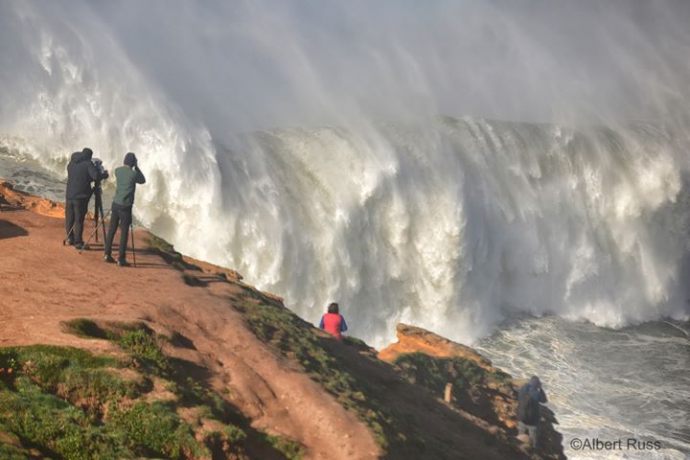 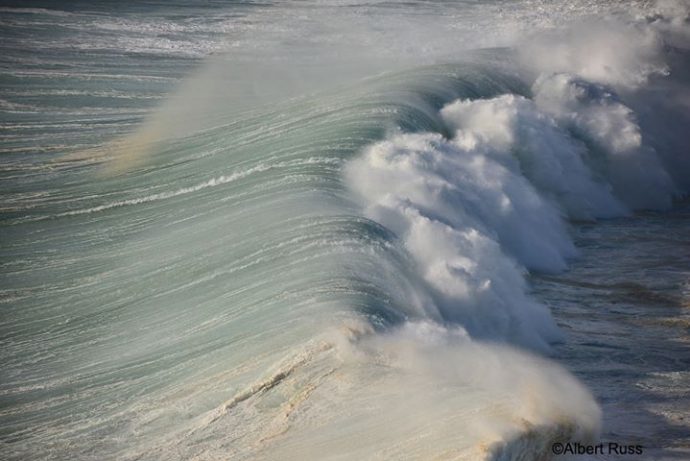 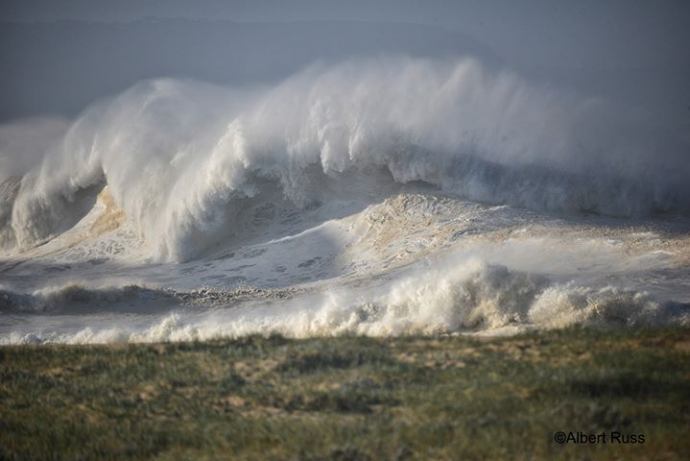 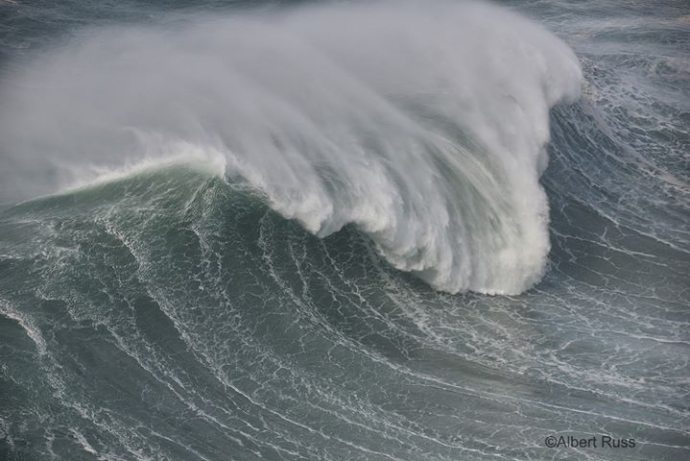 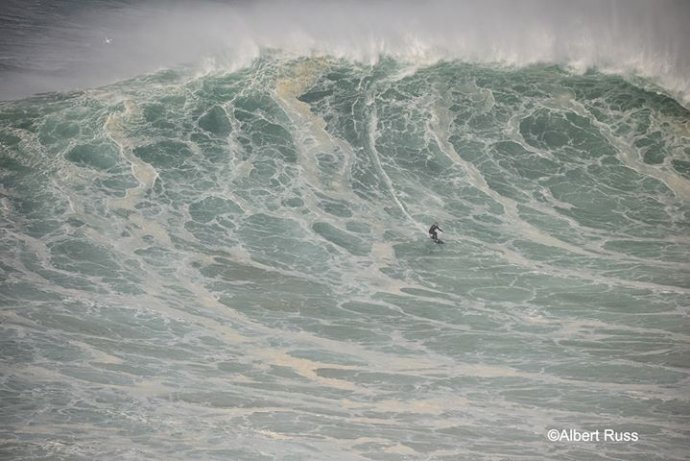 I was watching the whole thing developing in the north Atlantic and figured there could be a few days in a row with really big surf, so I watched the forecasts and decided to fly in on Friday to be ready for Saturday and Monday, which were supposedly two major days from the sister storms, the second one was Dennis I believe.
When we got to Nazare on Friday late afternoon it was big but Saturday turned out to be both very big and clean with barely any wind, some photos from Saturday show nice swell lines all the way to the horizon.
On Sunday I went down to Peniche because it got cloudy and although it continued to be big, I decided to take a short trip out of Nazare to be completely ready for Monday.
Monday was by far the biggest day but I was afraid of the strong northerly wind, I was quite worried it will become onshore and unrideable, stormy surf. It turned out I was wrong and although I have been to Nazare before, I did not quite understand that the north wind might even improve this situation, and it did, it made it more dramatic. I spoke with other photographers and was told the main swell would arrive in the early afternoon. By that time not only did the waves get bigger but also the tide was going out and in shallow water, bigger waves started breaking very far, the biggest sets were breaking perhaps 1-1.5 km off the lighthouse. It was quite misty with all the spray forming from waves so it was quite difficult to see anyone surfing there, even with a telephoto lens.

This was one of the biggest waves I have seen on that day way out in the ocean, the photo was heavily post-processed so that at least some details could come out, the photo was taken like through a fog. I photographed nonstop till late afternoon and had to take a break after that because I was getting quite thirsty, hungry and tired, so I took an hour break and was just in time for a spectacular sunset.
On Tuesday morning the waves became just slightly smaller, it seemed like they were maintaining almost the same size. Again very strong north wind but this time much much better visibility and most of the mist was gone. Of course, droplets from whitewater were covering the largest waves from time to time but finally, it was possible to make some nice shots from the beach. Normally it is almost impossible to make a nice shot directly from the beach where you zoom in across fog, mist, and droplets. This time winds were probably strong enough to move most droplets fast out of the way and it was possible to zoom in very low angle to get the dramatic shots where waves look like behind people although they are perhaps 1 km away from them.
Although waves were big all the time, only on Tuesday it was possible to do these photos. Unfortunately, we had to leave and because the conditions were so great, we still stayed for 2 hours longer than planned before we finally had to go back to Lisbon and fly home early on the next day.

Here is also a pretty good display of the swell lines all the way to the horizon, gradually pushed towards the coast in Nazare: 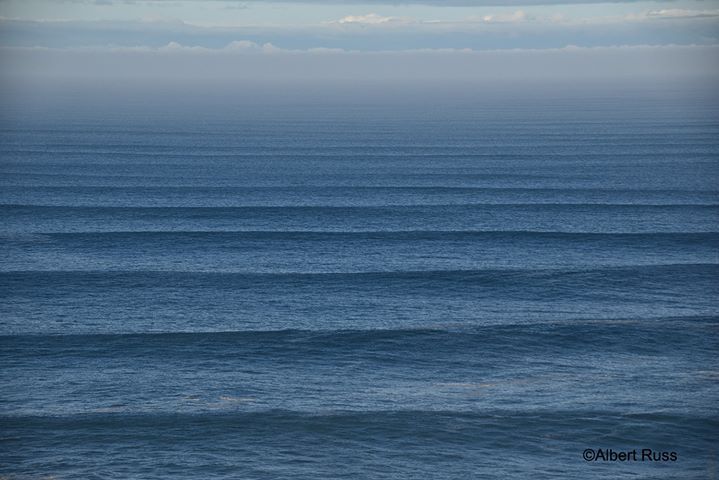 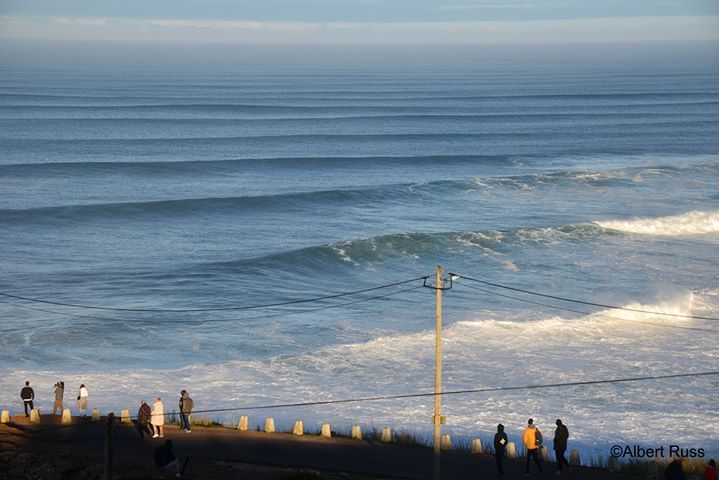 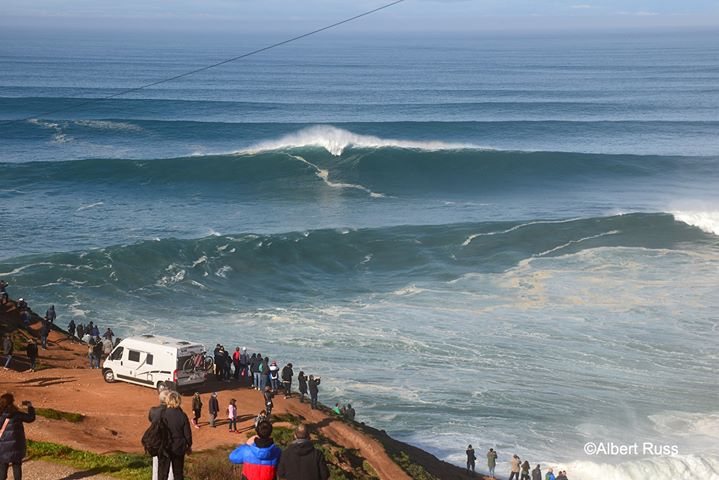 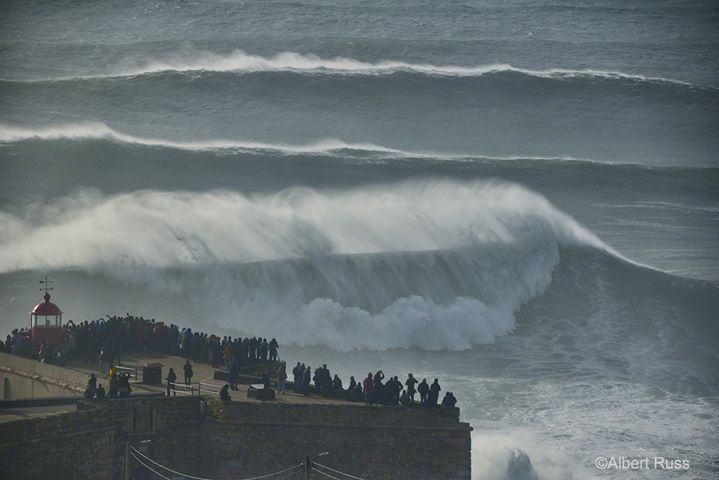 Albert adds some extra fun details of this trip:

I have seen similar epic conditions once before in Nazare but these lasted for a day and a half, in this case, because of a line of storms, apparently, giant surf was maintained for 10 days which is very rare. The funny thing was, my friend has been to the ocean for the first time in his life, I have photographed and bodysurfed spots in California, Hawaii, Florida, the Canaries, France, Spain, Portugal and only once before did I see something like this. In his case, he enjoyed it a lot but unfortunately got maybe a wrong impression on how the ocean looks like, well whatever he saw was not typical but rather rare and extreme, so when he comes to the ocean next time I suspect he will be disappointed :)

Albert also met the famous legend Garrett McNamara before he went surfing. Garrett is the legend of Nazare, who twice broke the world record surfing on the highest waves before somebody else took over. Garrett is from the US, partly living in Nazare but even if he’s not all the time, he always comes to Nazare when waves are expected to become major! 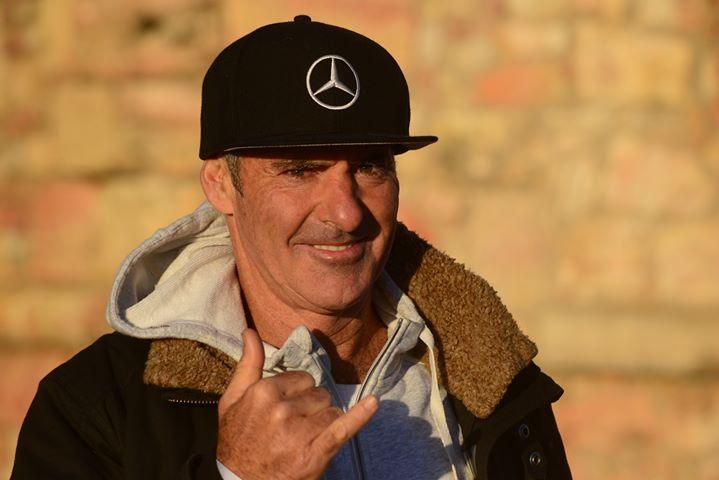 We thank and greatly appreciate Albert for sharing his trip details and spectacular photos with our followers. Don’t miss and check out Albert’s Facebook page for more of his photography – Albert Russ Photography.

Our SWE reporter Guy Coopmans was also at the scene on Feb 17th, we posted a spectacular video of the waves on our youtube channel last week:

Guy Coopmans was at the scene also earlier in November:

See also – the Recap of one of the most intense extratropical cyclones on record in the North Atlantic and also the most photogenic cyclone of this winter season – storm #Dennis: