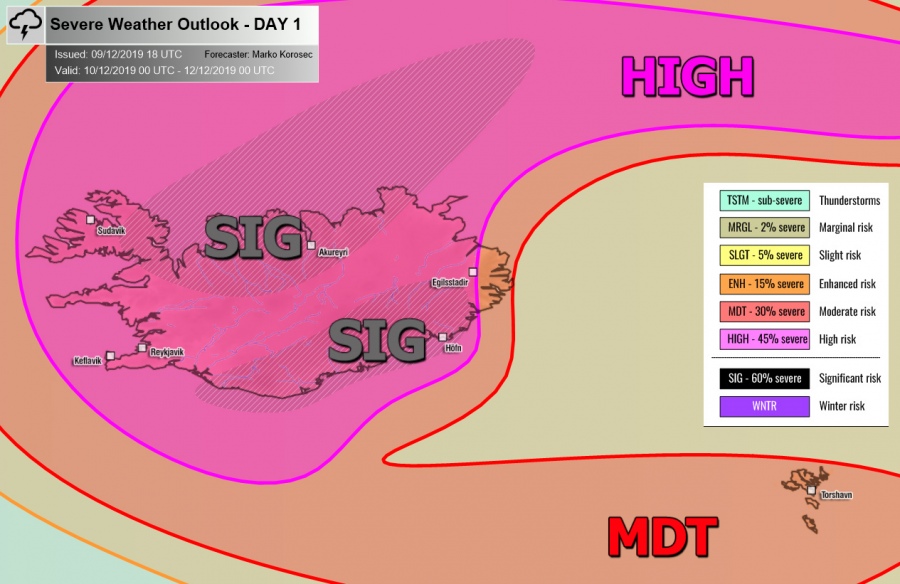 HIGH risk has been issued for most of Iceland and for the areas to the north with threat for extremely severe winds, major excessive snowfall (northern Iceland) and blizzard conditions. Major storm surge and high waves are also likely along the coasts of northern Iceland, locally above 10-meter wave are possible!

Additionally, a broad SIG risk areas have been placed for north and south-southeast Iceland where even more robust and extreme weather conditions are expected. A combination of extremely severe winds, locally with hurricane-force speeds and intense snowfall will create life-threatening conditions. Violent blizzard is expected, resulting in major snowdrifts. Significant disruptions in travels are likely, including roadblocks and impassable roads due to both blizzard and whiteout conditions.

The northern SIG risk area has been issued for the reason of hurricane-force winds and major snowdrifts, as intense and persisting orographic snowfall will occur. Models are hinting 100-150 cm of fresh snow within 36-48 hours will be possible across a broad area while even higher amounts are likely across the mountainous terrain of northern half of Iceland where orographic features will be maximized.

The SIG risk across the south-southeast Iceland has been issued for extremely intense to violent downslope wind gusts from the high mountains towards the coastal areas. High-resolution models are hinting sustained with 140-180 km/h are possible, with much higher wind gusts. Closed valley should additionally enhance downslope flow, therefore result in violent gusts in excess of 200-220 km/h! 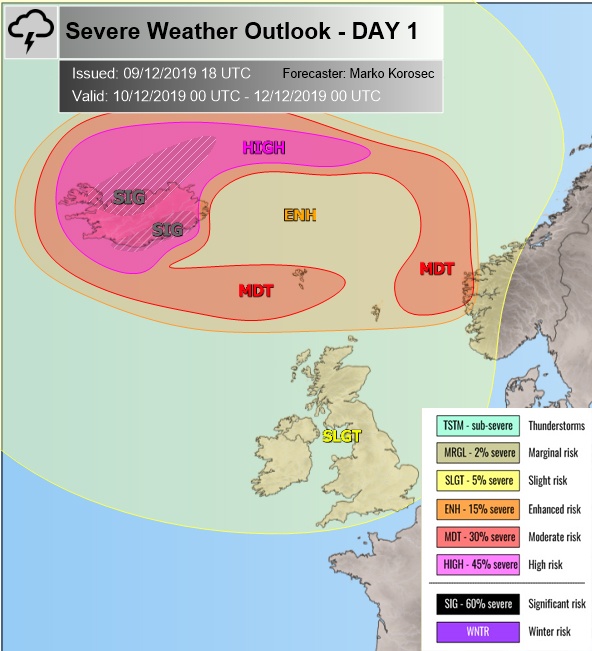 MDT / ENH risks have been issued for areas surrounding the HIGH / SIG risk areas and also towards the Faroe Islands and extreme SW Norway with a threat for severe to extremely severe winds in excess of 120-140 km/h.

SLGT risk has been expanded across the western Europe, Norwegian sea, W Norway and North Atlantic with threat for severe winds, locally in excess of 100 km/h.

Please refer to the Mesoscale Discussion for additional synoptic details: