This is the evening update on a developing powerful winter storm over Iceland through the next 48 hours. Models are is very good agreement in developing a very dangerous cyclone, rapidly intensifying from this evening through Tuesday night. Cyclone is now already developing west of Iceland with central pressure around 975 mbar. The central pressure is expected to drop for an additional 35 mbar until Tuesday night and could drop below 940 mbar! Extreme snowfall and life-threatening blizzard conditions are expected to develop across many areas in Iceland, including major 100-200 cm snowfall event across northern parts and *violent* hurricane-force windstorm with 200-250 km/h peak gusts across the SE parts of Iceland. 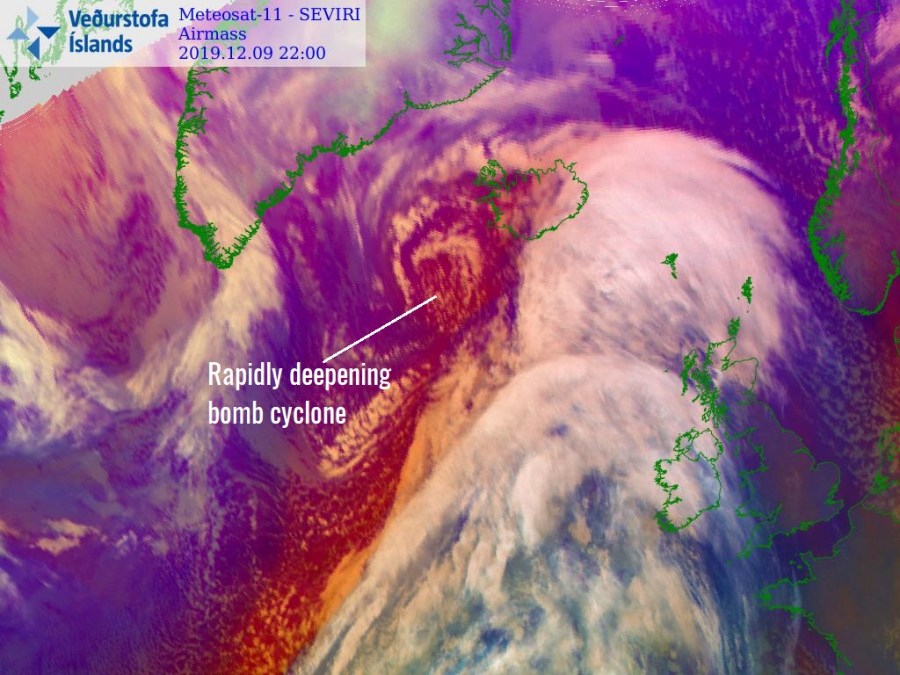 Evening analysis reveal a rapidly deepening cyclone with its center west of Iceland right now. Central pressure is around 975 mbar and dropping. Notice the sea surface pressure graphics from the main Icelandic airport, Keflavik. Steadily falling pressure from around 1005 mbar in the morning hours to already near 980 mbar by the evening hours (25 mbar pressure drop in 18 hours). Sea-level pressure will additionally drop overnight as cyclone continues rapidly intensifying while crossing Iceland from west to east. 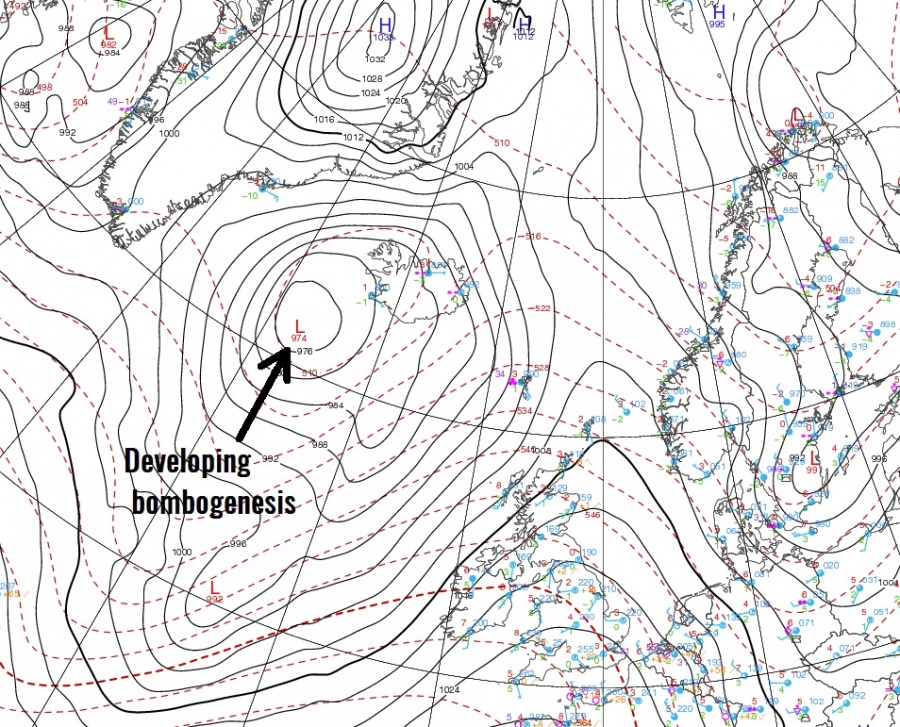 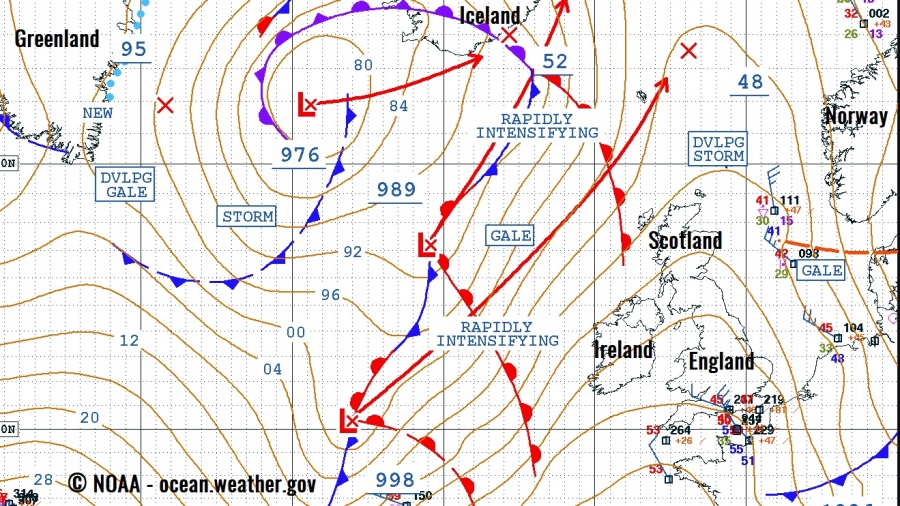 Icelanding Met office has issued orange warning for the whole country with northerly parts in the highest threat – red warning! Below is some strong wording regarding the development of dangerous weather conditions: 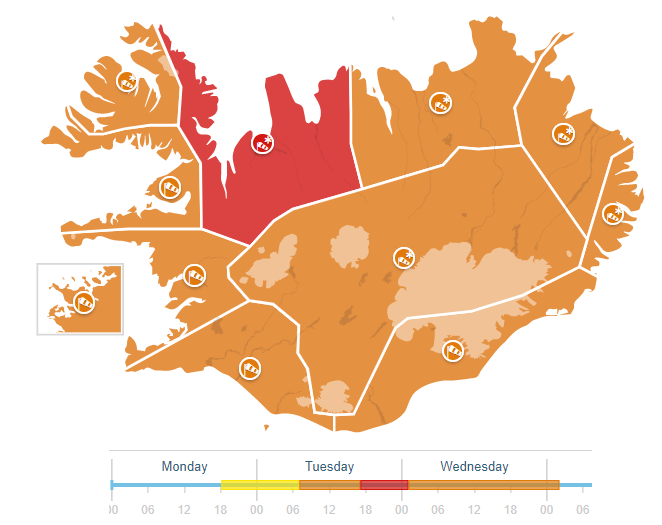 Northerly snowstorm (Orange condition)
10 Dec. at 08:00 – 18:00
Northeasterly and then northerly storm (23-30 m/s) and heavy snow or blowing snow can also be expected with very poor visibility and deteriorating road conditions. The weather is likely to cause…

Violent storm and severe blizzard (Red condition)
10 Dec. at 18:00 – 11 Dec. at 02:00
A violent storm, 25 to 33 m/s and a severe blizzard is forecasted in the region. Very poor visibility and dangerous road conditions. The weather is likely to cause transport disturbances and traveling is not advised while the weather warning is in effect. Higher sea levels, wave heights up to 10 m., are anticipated due to storm surge with the possibility of small boats being damaged or detached from the dock. People are advised to show caution and monitor weather forecasts. Traveling should be avoided.

Looking over the wind field across Iceland, windstorm with northeasterly wind direction intensifies by Tuesday morning, Dec 10th, across north and northwest Iceland, strengthening during the afternoon and evening hours and turning more northerly while also spreading across western Iceland. Overnight to Wednesday, Dec 11th, severe windstorm spreads across whole Iceland and become particularly intense along the slopes from the Vatna Glacier into the SE parts of the country. Extreme to violent windstorm with peak gusts in excess of 200 km/h is increasingly likely to develop there.

Violent downslope winds will develop from the Vatnajökull volcano (Vatna Glacier) into the coastal areas of SSE Iceland, some models are hinting around 250 km/h peak gusts! 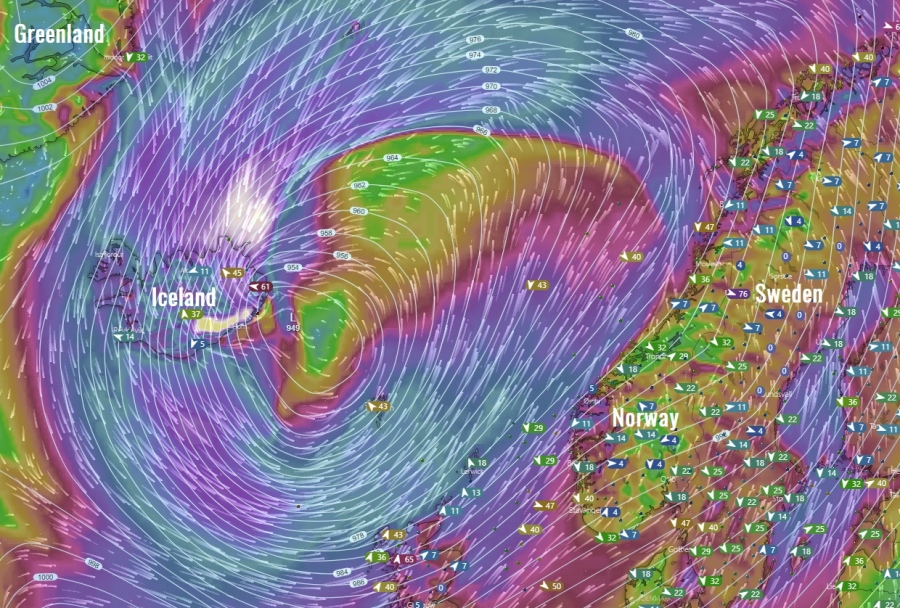 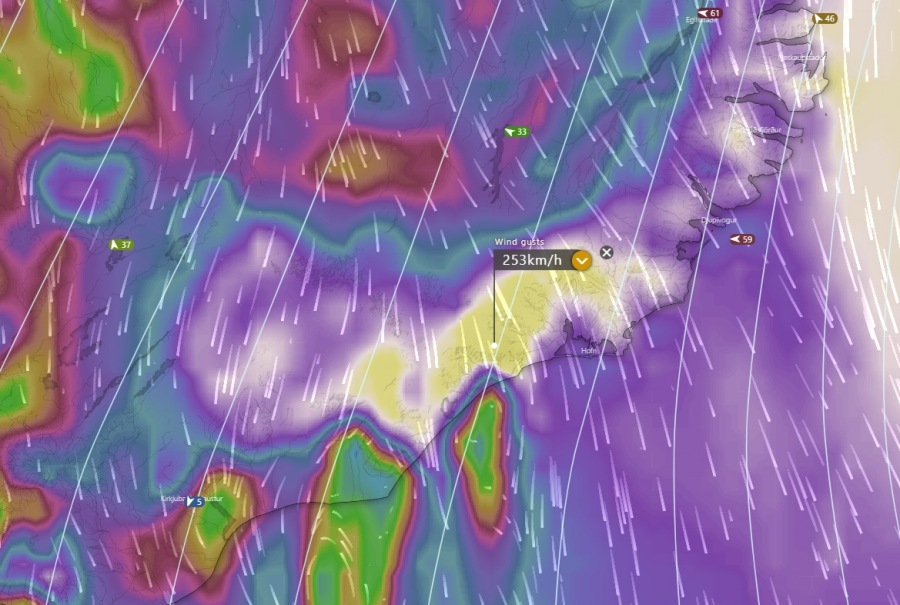 A detailed view of the intense snowfall developing with the low-level NE flow across the north-northeast Iceland. Snowfall begins tonight but significantly intensifies as cyclone deepens on Tuesday and becomes particularly intense through the afternoon and evening hours tomorrow, Dec 10th. With snowfall rates 10-15 mm of hourly precipitation, which is around 15-20 cm of snowfall per hour! Excessive snowfall should be going through a long period of time, so significant amounts are expected and snow will be accumulating fast – this will also strongly enhance avalanche threat along the slopes.

Detailed map of huge amounts of snow expected across northern Iceland, accumulating above 150 cm by Wednesday afternoon (36-48 hours period) as textbook intense orographic snowfall develops with the NNE winds. The mountain range to the west and southwest of Akureyri should experience the most intense and the most excessive snowfall. Could not exclude close to 2 meters (200 cm) of fresh snow until late Wednesday there! 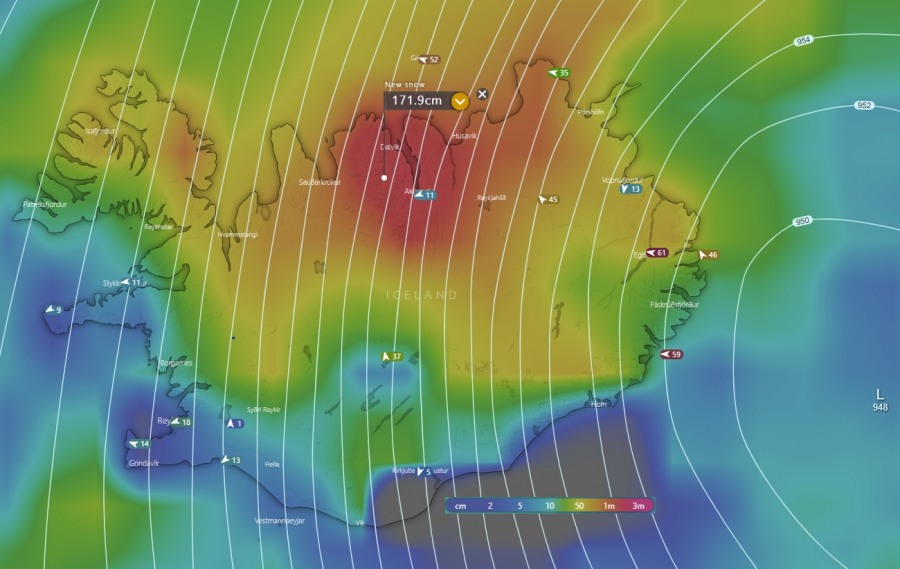 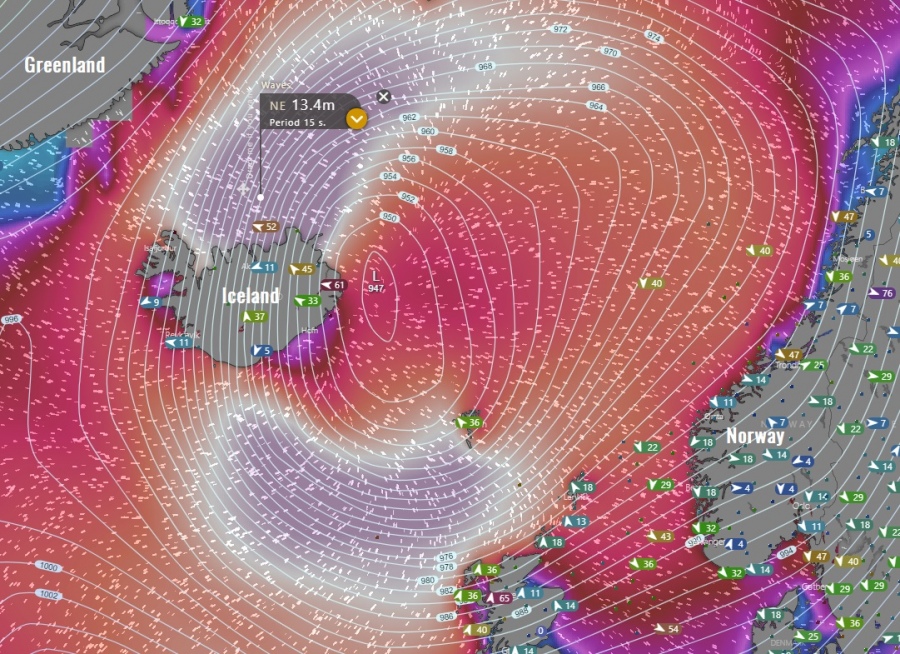