An enormous iceberg broke off the Ronne Ice Shelf in Antarctica, moving into the Weddell Sea. It is over 4,300 square kilometers in size and is now the largest iceberg in the world.

The iceberg is named A-76, as it broke off in the A sector of Antarctica. It is much larger than the state of Rhode Island and is over 70-timers larger than Manhattan, NY. But first, let’s quickly look at some interesting facts about Antarctica.

Antarctica is Earth’s fifth-largest continent and is covered almost completely in ice. It is the coldest place on Earth with an average winter temperature of -34.4°C (-30°F). The lowest temperature ever recorded on Earth was in Antarctica, at -89.4°C (-129°F).

The image below shows the landscape of Antarctica, with the main ice shelves marked. Our story happens in northwest Antarctica, on the western edge of the Ronne Ice Shelf. 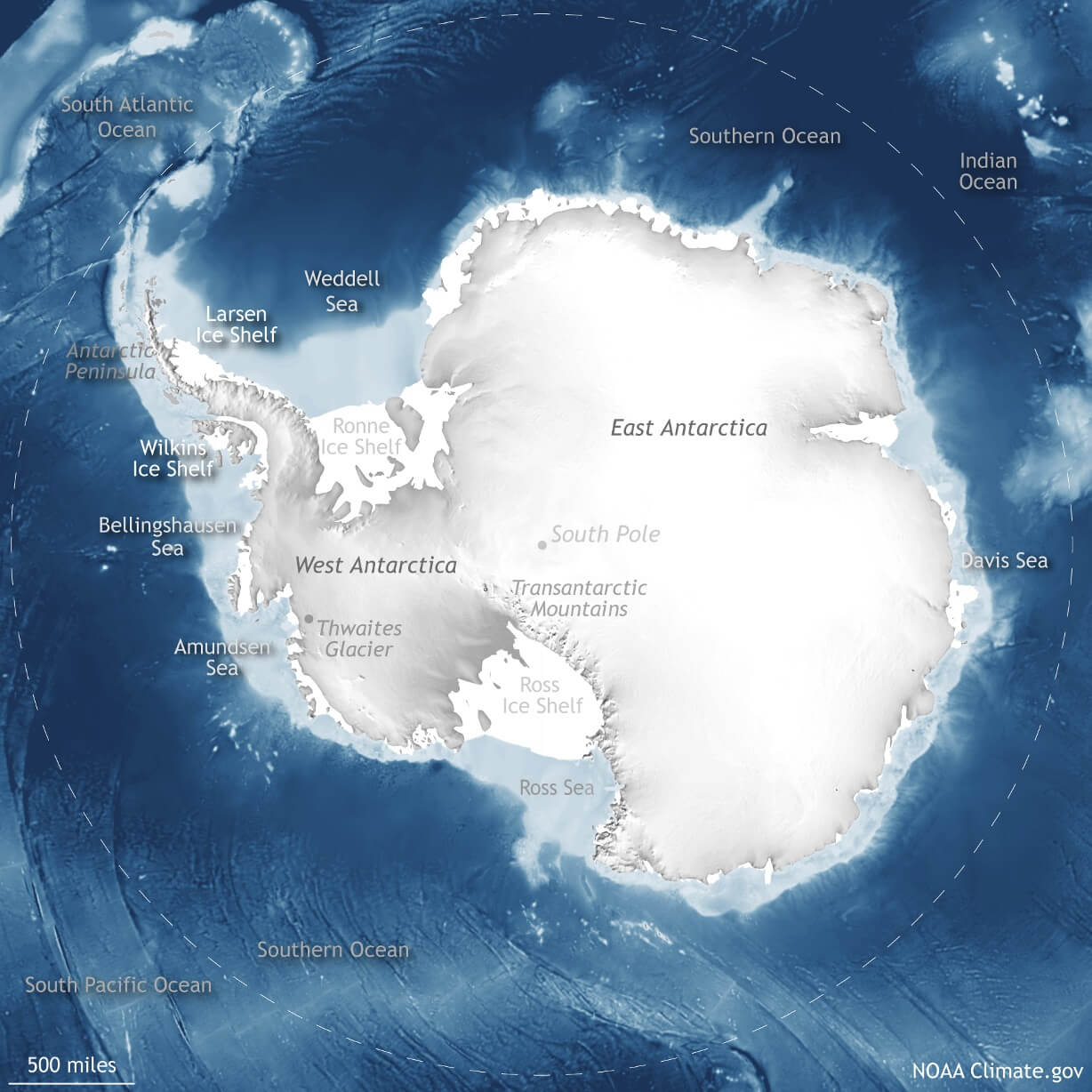 Antarctica is also surrounded by sea-ice, which is basically a frozen ocean. It freezes towards winter and melts over summer, just like in the Arctic Ocean. Together with the continental ice sheets, it forms the south polar icecap.

The video below shows the sea-ice concentration around Antarctica, from February till May. You can see the rapid freezing of the ocean surface and sea-ice formation, as the Southern Hemisphere is heading toward winter.

But the main ice mass is the vast ice sheet over the continent. It covers about 98% of the Antarctic continent and is the largest single mass of ice on Earth. Around 61% of all fresh water on Earth is stored in the Antarctic ice sheet. If all would somehow melt, it would raise the global sea level by almost 60 meters (200ft).

Antarctica is in fact a desert because it receives very little precipitation. The small amount of snow that does fall, builds up over hundreds and thousands of years to form its large, thick ice sheets.

The image below shows the average daily precipitation in the past 40 years, where we can see the wet and dry zones around the world. The south pole is one of the driest places on Earth, behind the Saharan desert. 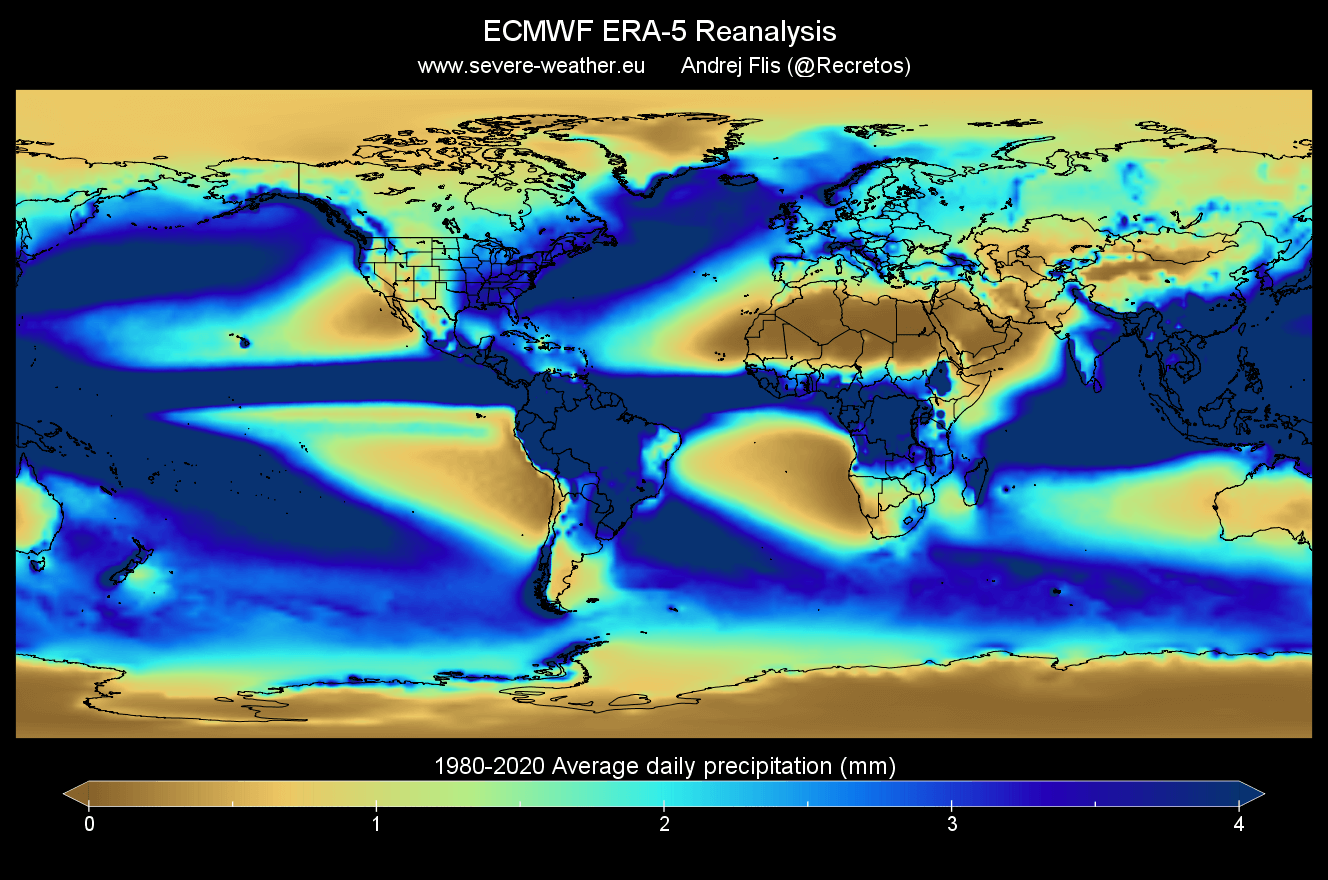 ICEBERG A-76, THE WORLDS LARGEST

Antarctica is known for producing large icebergs, as they break off its ice shelves and ice sheets. The first signs that something big was happening, were detected by the British Antarctic Survey.

It was the first organization to notice the breaking and cracks on the ice shelf. The Sentinel-1 satellite from the European Space Agency scanned the area on May 13 and confirmed a giant slab of ice breaking away from the shelf.

Below is an image that shows a simplified example of calving. As the edge of the glacier moves into the ocean or a lake, it becomes unstable as it is no longer supported by solid land. A large chunk of ice can break off, creating a floating mass of ice (an iceberg).

The satellite image below shows the edge of the Ronne Ice Shelf in early May. You can already see a large crack forming from west to east. This is the breaking point, where the iceberg will detach from the ice shelf. 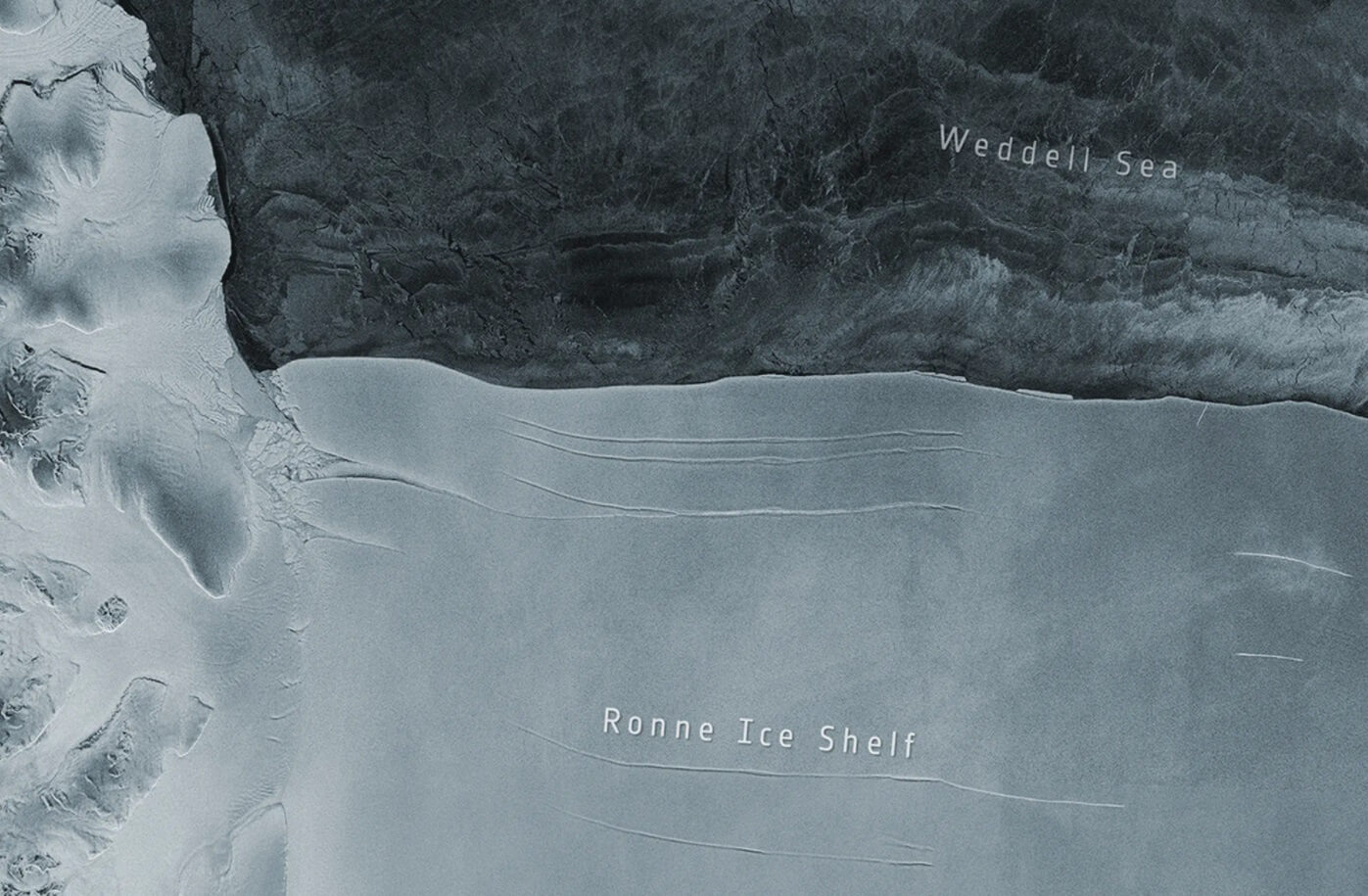 A few days later, the crack widened, and the ice mass started to break off on the eastern side. This detached the entire block of ice from the ice shelf, and the largest iceberg in the world was born. 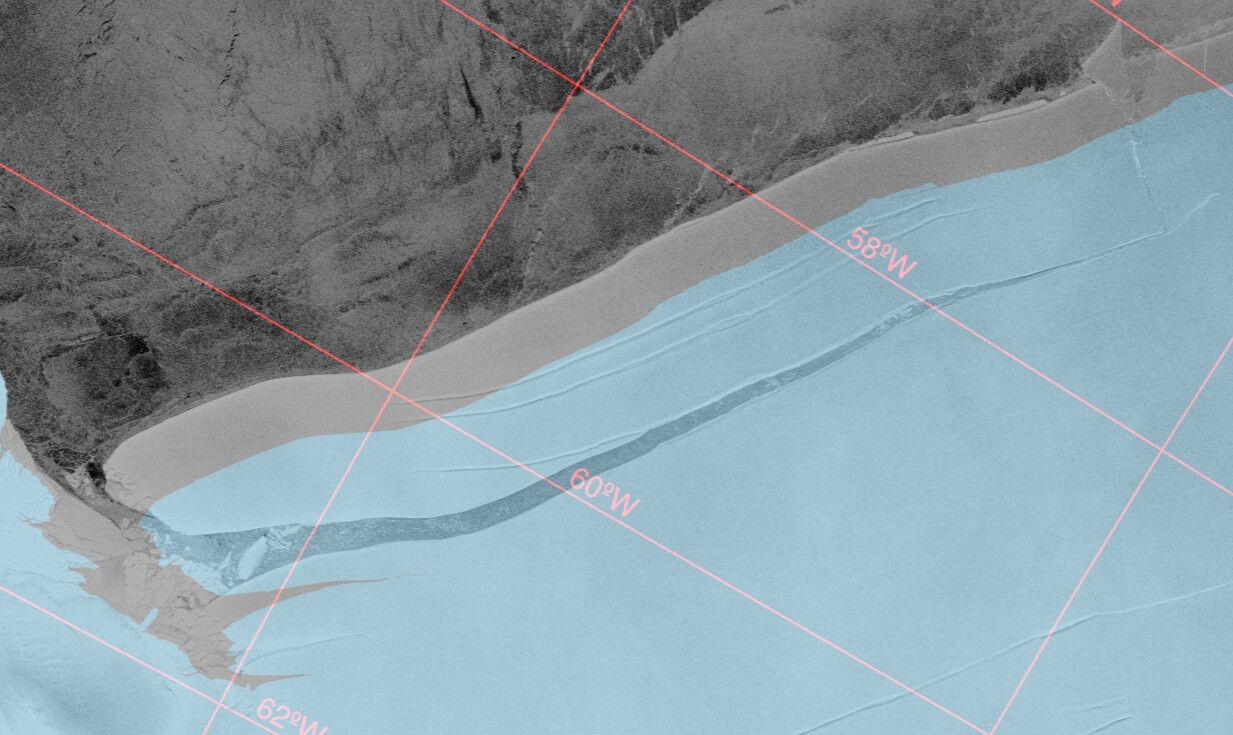 This finger-shaped block of ice is around 170 kilometers (105 miles) long and around 25 kilometers (15 miles) wide. The 4,320 square kilometers (1,660 square miles) iceberg has been named A-76, after the Antarctic “A” quadrant where it broke off. It is currently the largest iceberg in the world.

Iceberg A-76 fully detached in the next days, becoming a free-floating mass of ice. The image below shows the iceberg fully detached from the ice shelf, and floating into the Weddell Sea. Also added is the size comparison to the island of Majorca (Mallorca), which is actually smaller in area than the iceberg A-76. 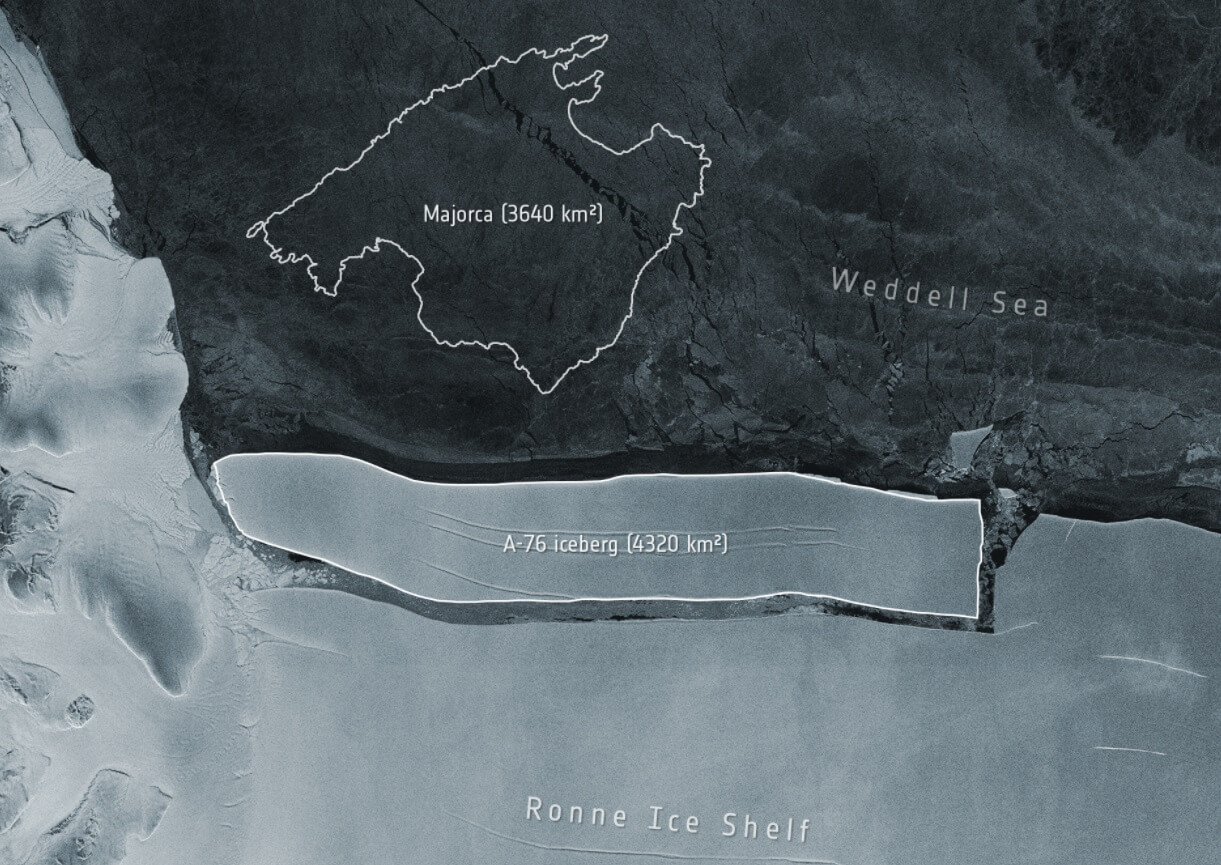 To give you another perspective of its size, you can see the island of Mallorca marked on the map below. It serves as a good comparison of the size of the iceberg to Spain or Italy. 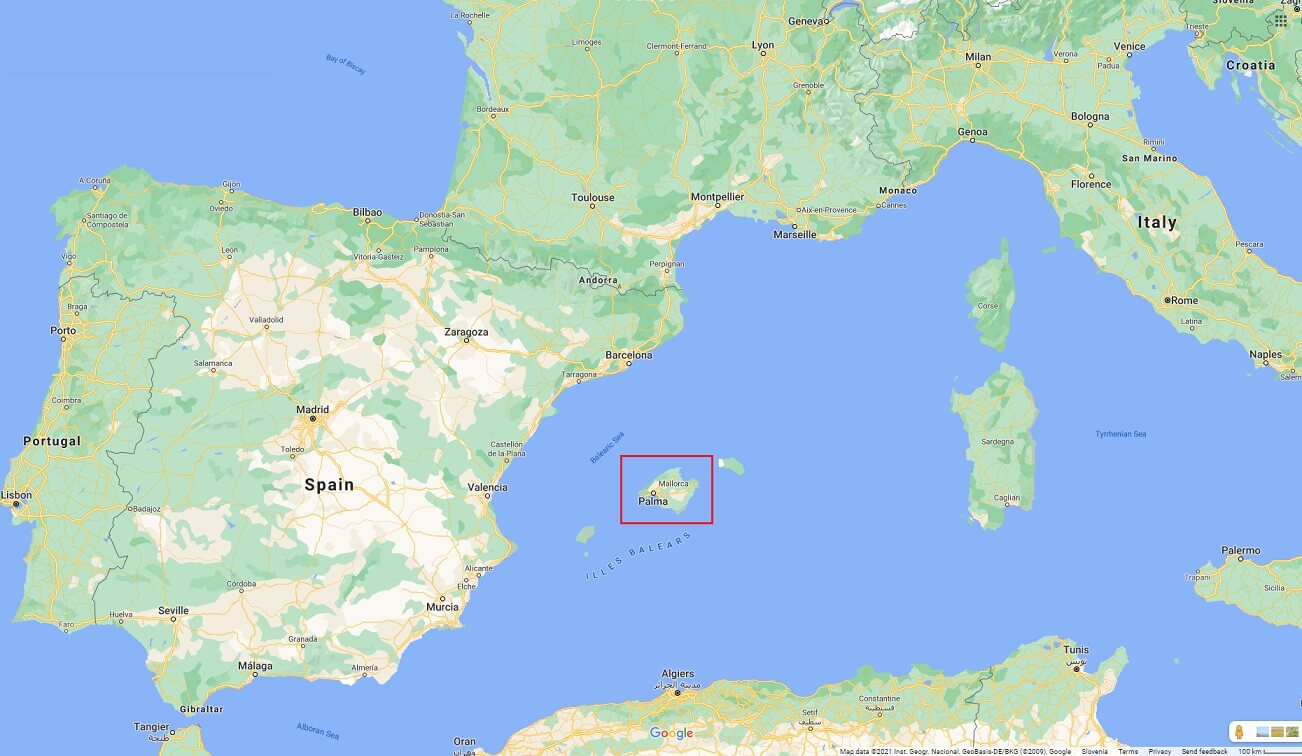 The latest satellite image below shows that iceberg A-76 has moved slightly further out into the Weddell Sea, but remains fairly stationary. 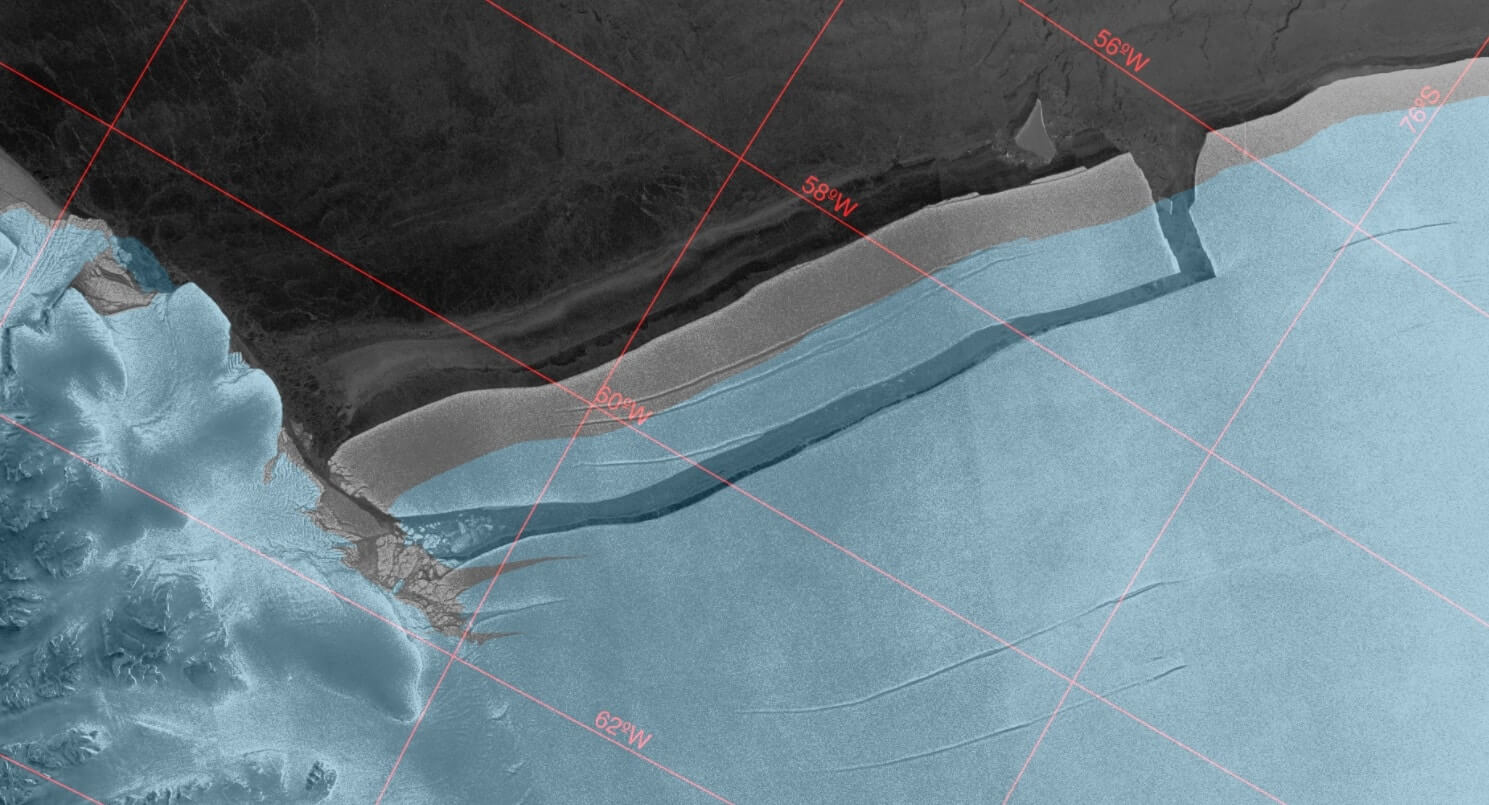 The short video below shows the full calving event sequence and the birth of the iceberg A-76.

Based on the data from the European Space Agency, the largest active iceberg title was previously held by a chunk of ice known as A-23A. That iceberg, which covers an area of around 4,000 square kilometers (1,540 square miles), is also currently afloat in the Weddell Sea.

While A-76 is really big, it is only about one-third the size of the biggest iceberg in recorded history. That record belongs to an iceberg named B-15 that calved off of Antarctica’s Ross Ice Shelf 21 years ago. Iceberg B-15 measured a surface area of around 11,000 square kilometers (4,200 square miles), larger than the whole island of Jamaica.

The image below shows the record holder iceberg B-15 as it broke off in April 2000. 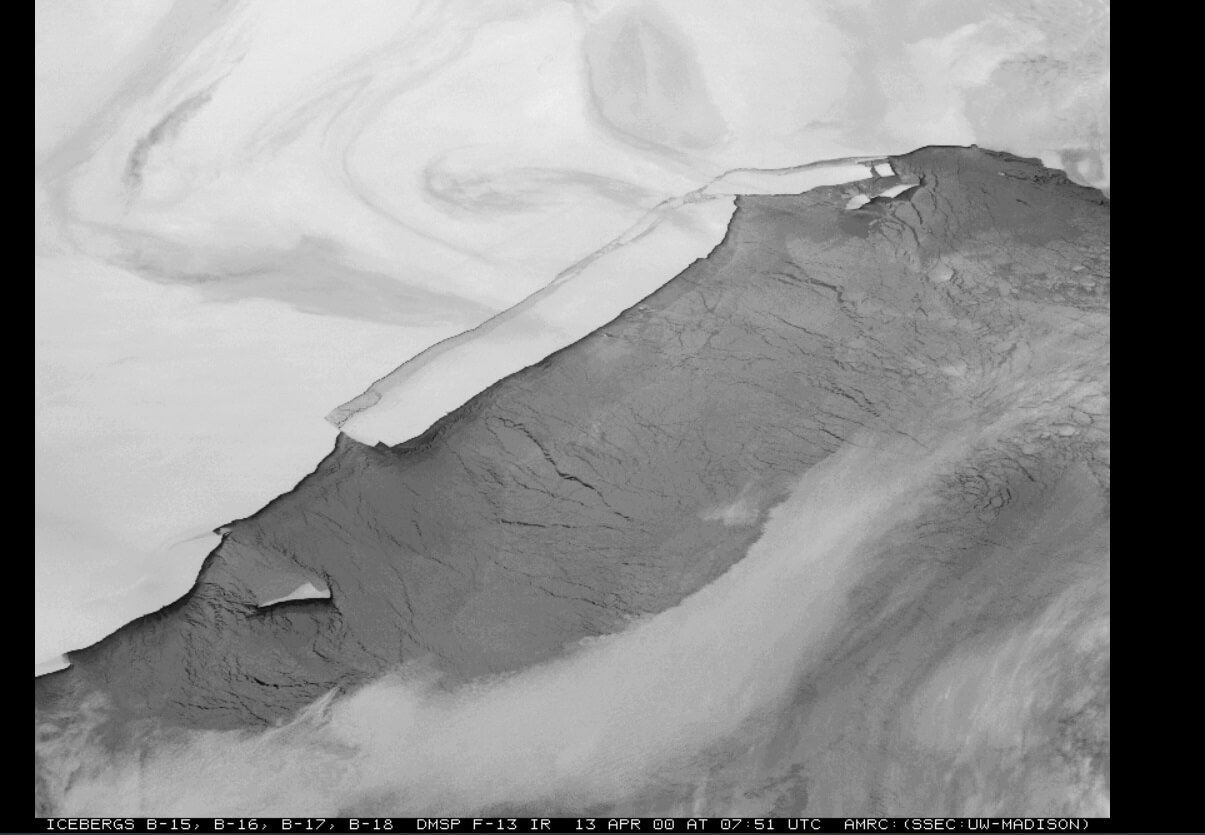 It is not uncommon for an ice shelf to break off big like this, and calving events occur naturally as the ice shelves advance into the open waters, becoming unstable on the edge. The A-76 and B-15 icebergs are both just part of the natural cycle of the ice shelves that did not break off big for many decades.

But scientists have said that climate change is causing worrisome changes across the Antarctic region. Global warming can accelerate the retreat of an ice shelf, making it unstable sooner, and breaking off more than it normally would. It also affects the melting and breaking off the Antarctic ice sheets, affecting the global sea levels.

Because the ice shelf that A-76 calved from was already floating on water, this event will not directly impact the global sea levels. The main problem for global sea-level rise is the ice that breaks off the continental ice sheet, as it moves from the land into the oceans, displacing a certain volume of water.

The image below from the European Space Agency shows the loss of ice mass in Antarctica, and how much it contributes to the rise of the global sea levels. You can see that most of the sea-level rise contributions are from west Antarctica. From 1993 to 2018, over 7mm of global sea-level rise was from the Antarctica ice sheet melting or calving. 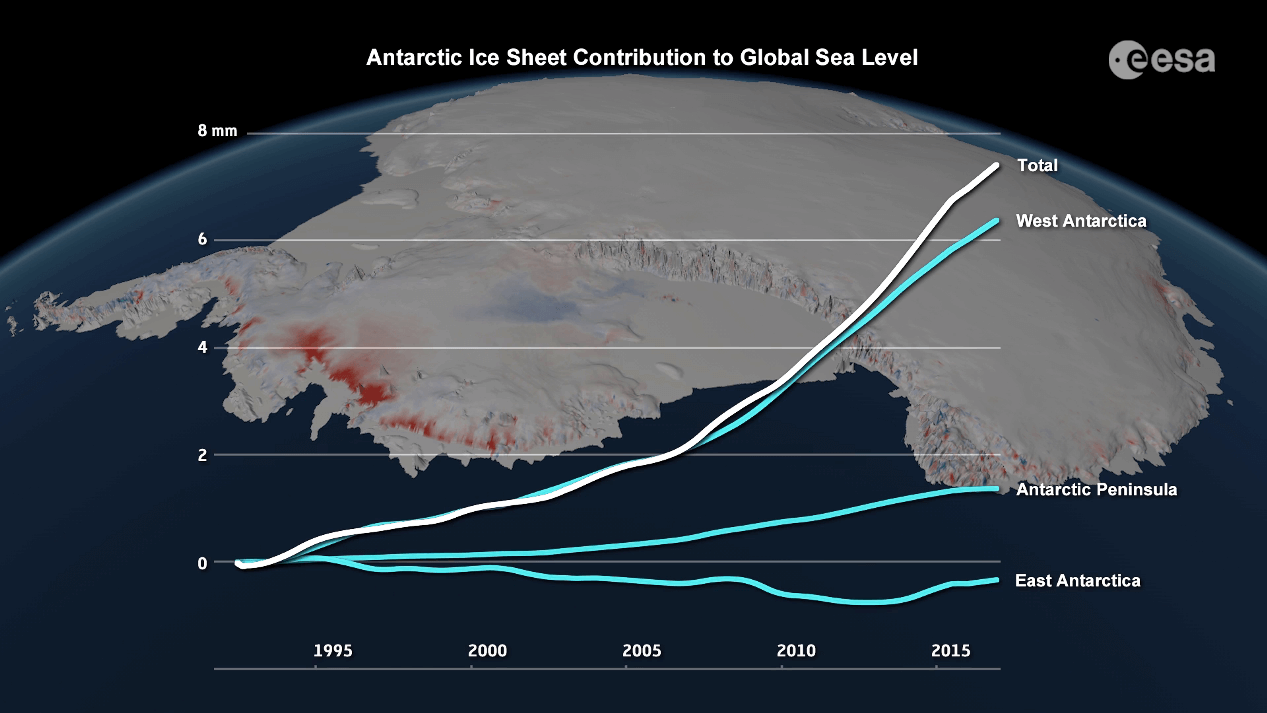 Long-term variations in sea level are also caused by processes including thermal expansion of the water, changes in ocean circulation, and changes in the size of other glaciers and ice sheets around the world.

The image below from NASA shows the total global sea-level rise, which is almost 10cm (4 inches) since 1993. Almost 10% of this rise was contributed by Antarctica alone.

Contrary to the thick land ice sheets that can raise the global sea level, the sea ice around Antarctica is already in the ocean, not contributing to sea-level rise.

The image below shows the annual minimum sea-ice area over the south pole since 1980. Unlike the Arctic Ocean, we do not have a clear trend of sea ice loss in the southern hemisphere. The latest years have been below average, but overall the trend is mostly stable.

The winter maximum sea ice extent also shows no clear long-term trend, which is quite a contrast to the Arctic Ocean regions. This implies that the conditions around Antarctica are fairly stable so far, with large year-to-year variations.

A rapid decline in annual sea ice around Antarctica would also mean worse conditions for the land ice sheets. That can lead to more calving events and icebergs which can raise the global sea level, along with the glacier melting.

Currently, in 2021, the Antarctic sea ice extent is running at or slightly above average. The sea ice over the south pole will continue to increase all the way into September, when it usually reaches its maximum, at the end of southern hemisphere summer. 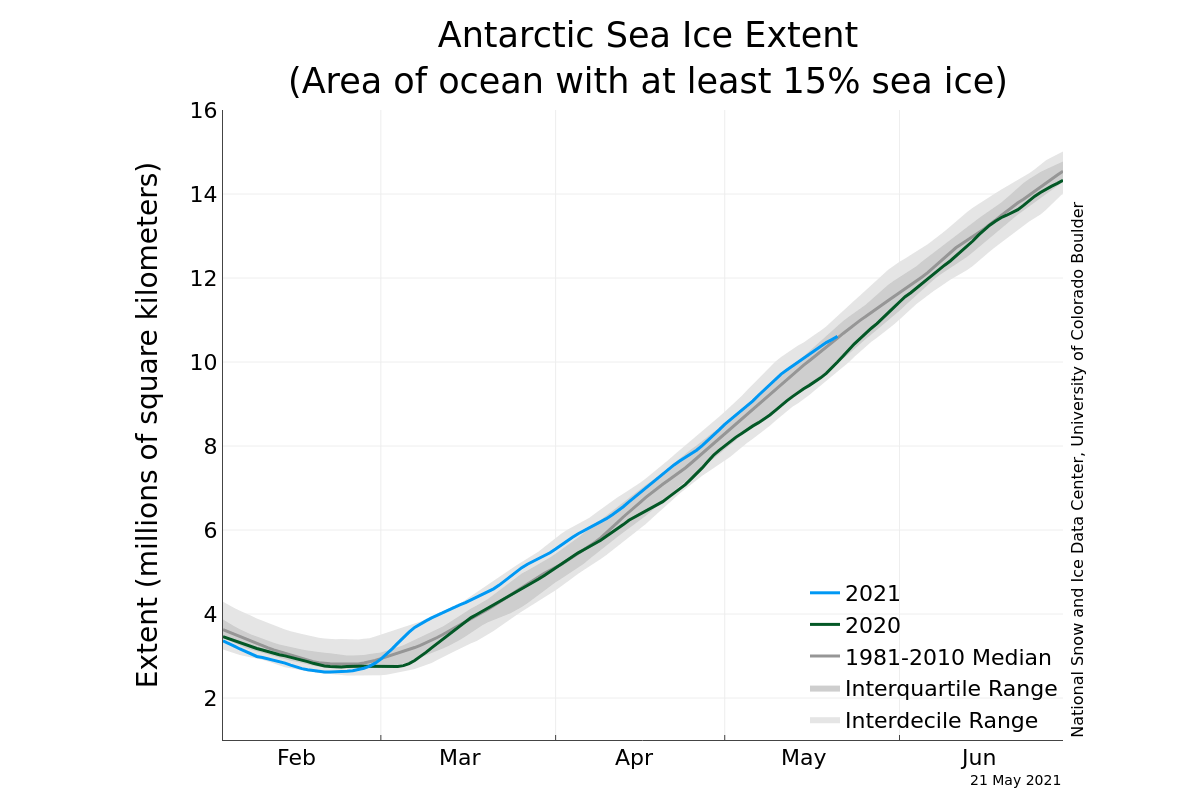 We will keep you updated on the global ice and ocean conditions, so make sure to bookmark our page. Also, if you have seen this article in the Google App (Discover) feed, click the like (♥) button to see more of our forecasts and our latest articles on weather and nature in general.

A record-breaking heatwave with almost +50 °C across the Middle East, the Arabian peninsula, and the Caucasus, forecast to head into Iran and Pakistan this week