Arctic sea ice has reached its maximum extent in March. The ice melt season will now begin, and it has the potential to be a record one, based on the latest forecasts.

The Arctic sea ice extent is actually running larger than in some latest years. But this does not mean that the melt season will be weaker as well. In fact, a very strong melting season is expected, with a good chance to reach a new record low extent in September.

The Arctic region is actually just one large ocean and has no large-scale landmass. It is the smallest and shallowest of the world’s five major oceans, and also the coldest. It is also the only ocean smaller than the largest country in the world by area, Russia.

The image below shows the Arctic ocean, as it would look without water, revealing a very complex underwater terrain. You can see the main regions of the Arctic ocean, each with its own set of unique weather properties. The graphic is from one of the more recent Arctic ocean studies. 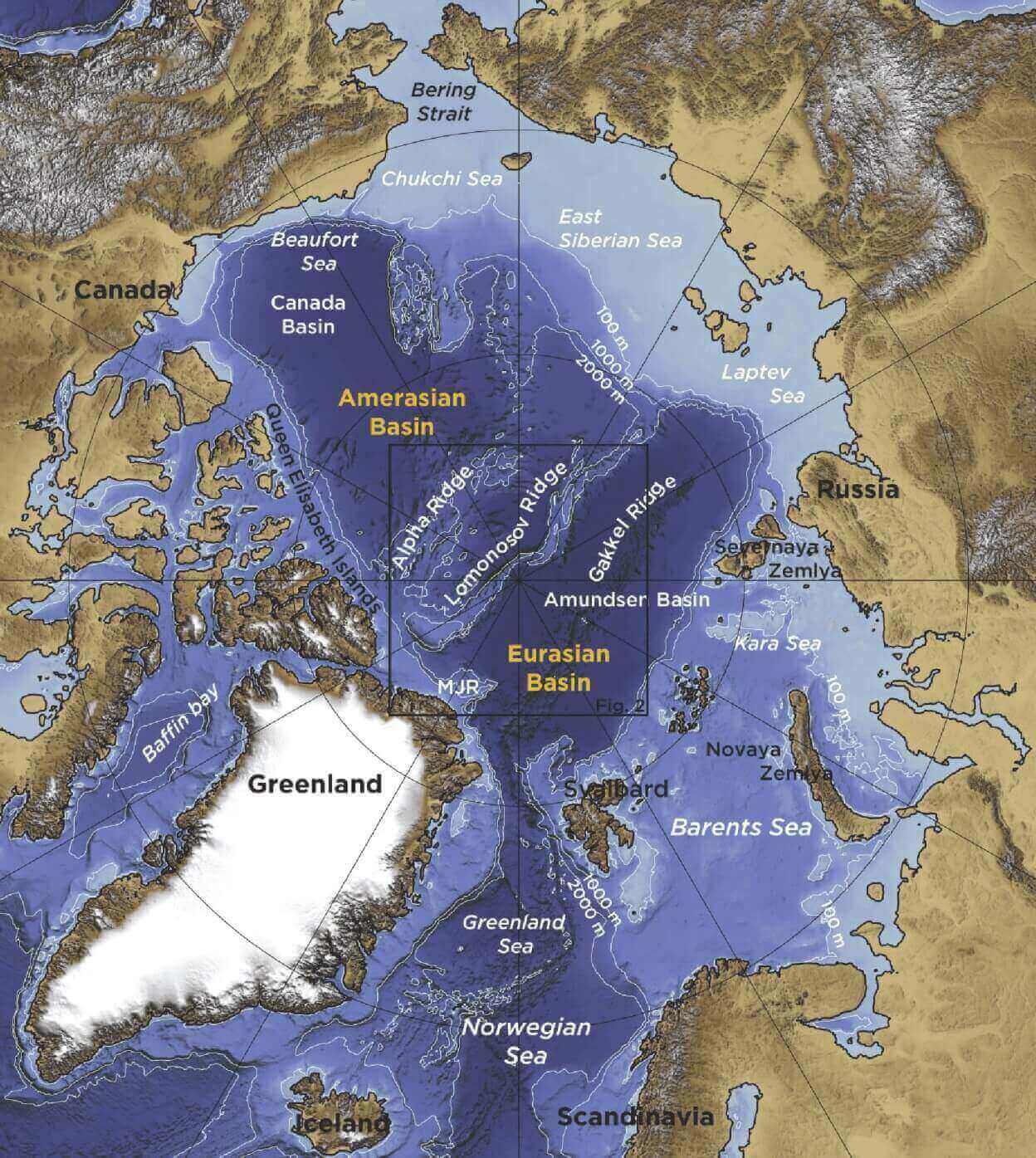 The Arctic sea ice seasonal cycle can be seen in the image below from the Arctic-ROOS system. It shows the Arctic sea ice extent change over a year. The melt season usually starts in March, after the peak ice extent is reached, lasting all the way to September. The graph shows the last few years of data, where we can see the 2020 Arctic ice extent was second-lowest, only behind 2012, which still holds the record for the lowest ice extent since measurements began. 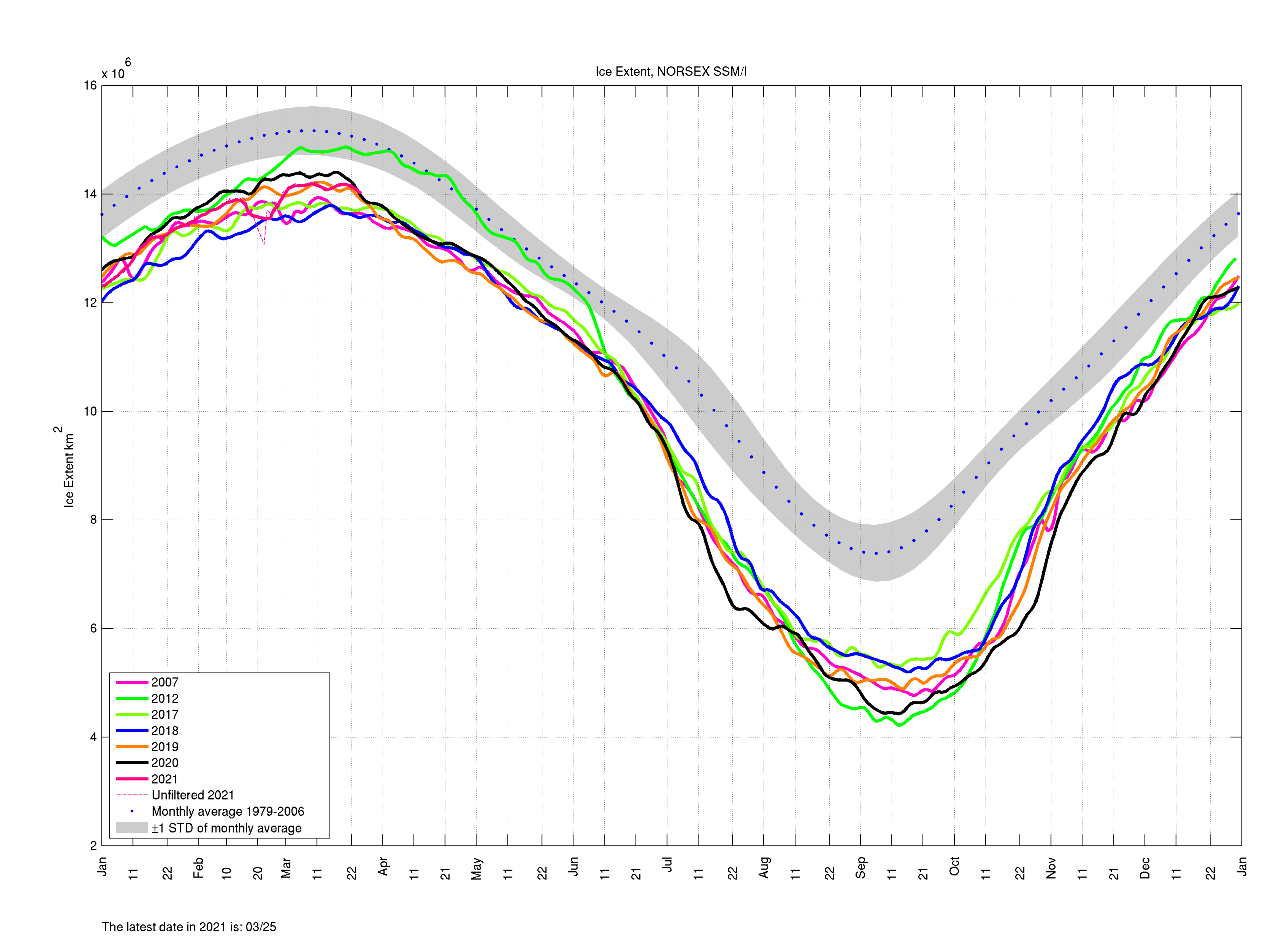 We produced a high-resolution video, which shows the entire 2020/2021 sea ice growth season in the Arctic. Take notice of the constant strong movement of the icecap, influenced by the ocean currents and also weather/wind dynamics.

Looking at current conditions, we can see the extent of the sea ice, compared to the long-term average (orange lines). The largest deficits can be found in eastern Canada in the Gulf of St. Lawrence, in the Kara Sea, Barents Sea, and in the Bering Sea. 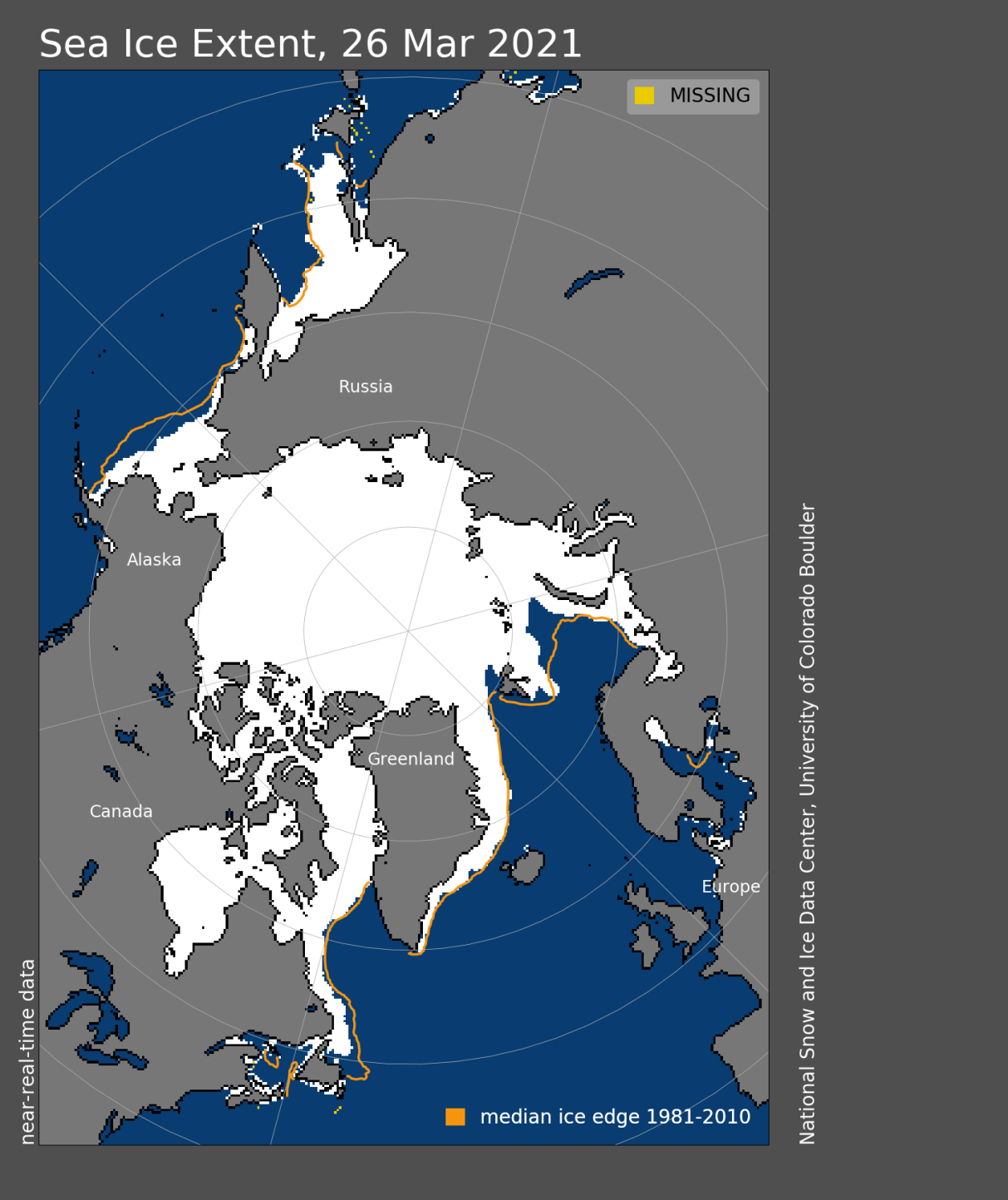 The line graph below shows the latest Arctic sea ice extent, which is running below the long-term average. The green line is the 2011-2012 sea ice growth season, which then continued into the record strong melt season in 2012. 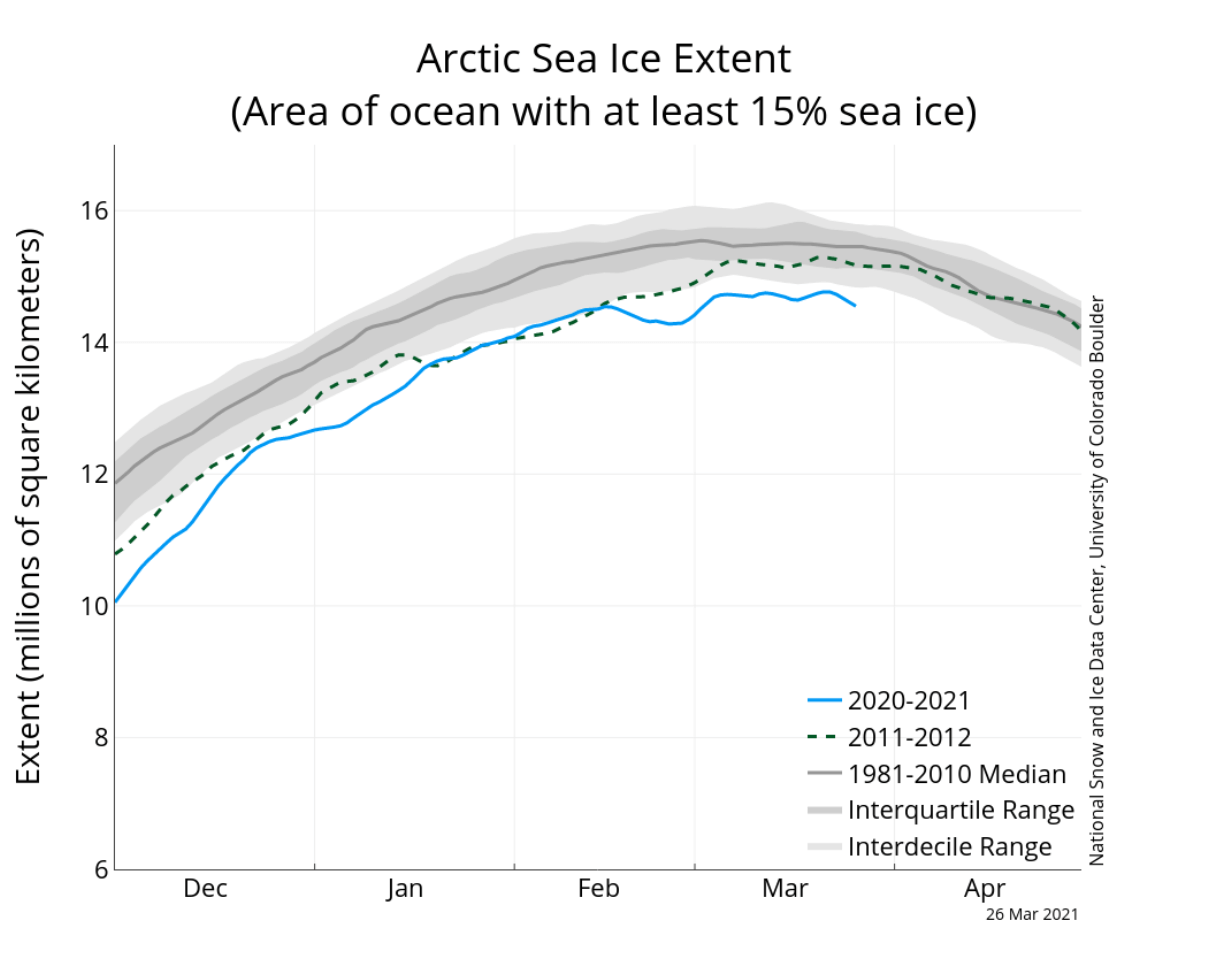 The current sea ice extent is slightly over 14.5million km², which is just a bit less than twice the size of the Continental United States. It is still well below the long-term average of the past 40 years. 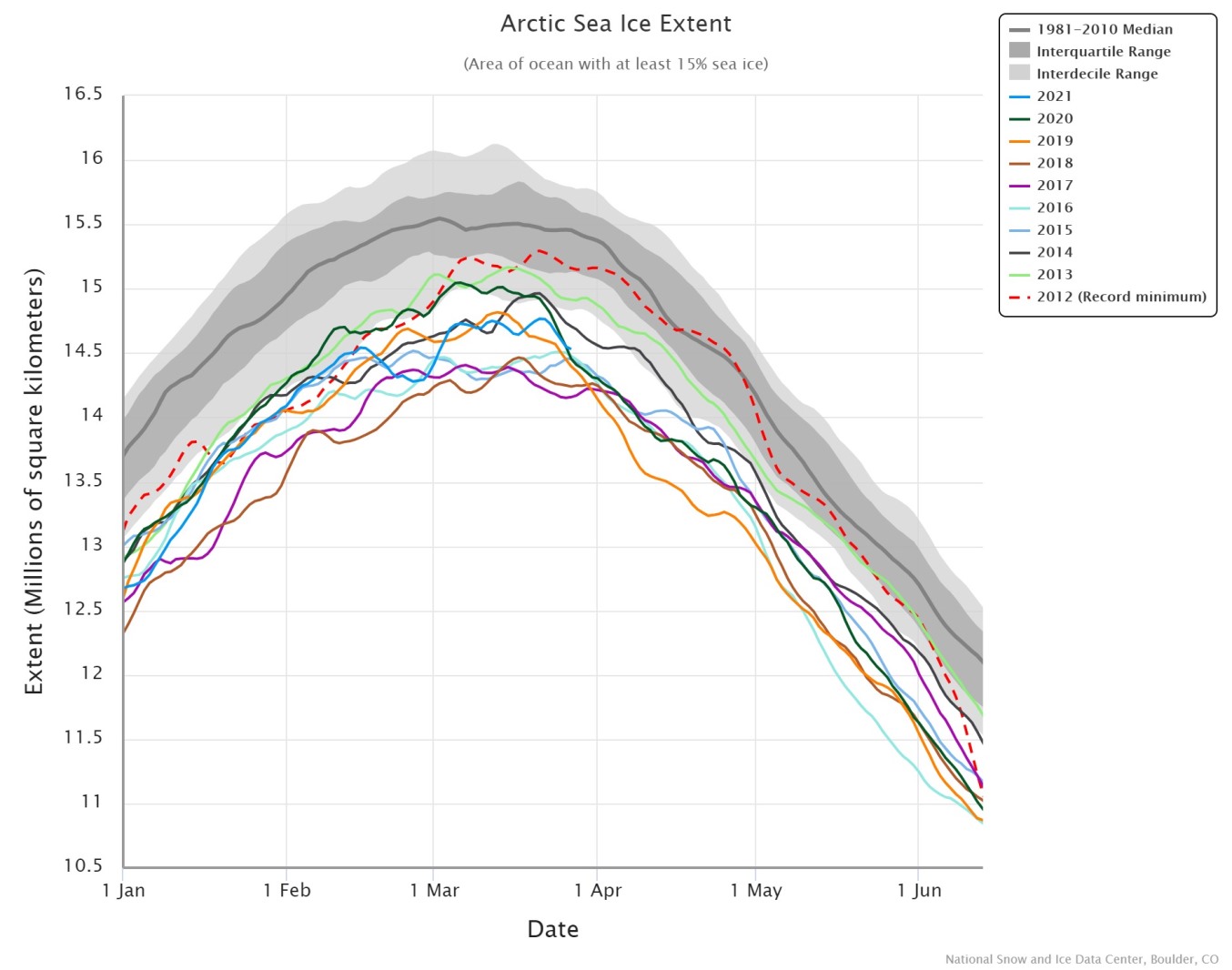 We can see the sea ice max over the last 17 years, and where 2021 ended up. It was actually higher than some of the recent years, and around the average for the 2010-2019 period. Note that this is from the JAXA dataset, which can be slightly different than the NSIDC data in the previous graphic. The graphic is by Zachary Labe. 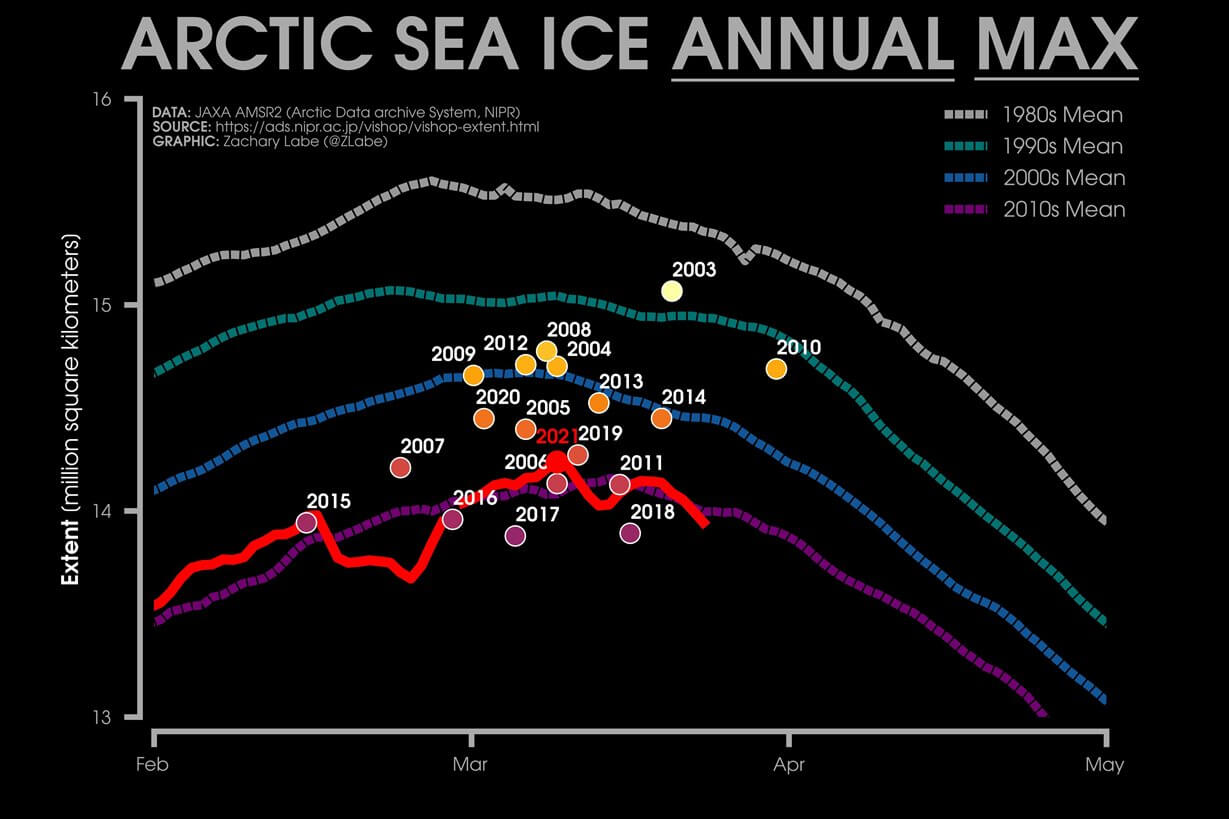 But Arctic sea ice is much more than just extent and area. Below you can see our graphic, which shows the sea ice concentration. It tells us what is the fraction of the sea ice in the ocean. We mostly have 90-100%, but it nicely shows just how diverse and dynamic the polar icecap really is across its vast size. 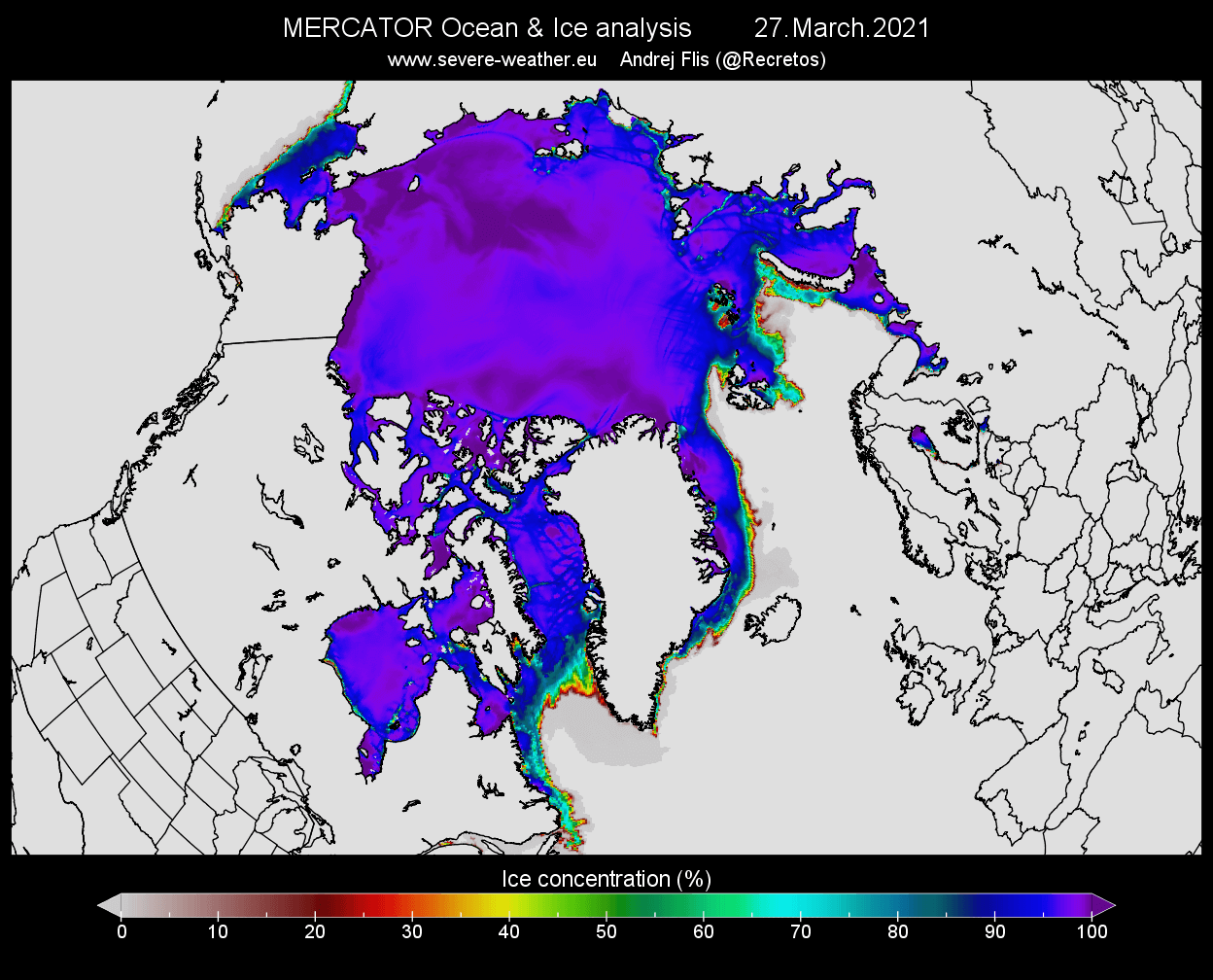 Another important parameter of the Arctic sea ice is of course its thickness. It reveals where the icecap is thicker, and where it is thinner, thus much more prone to melting. Obviously, the thinner ice can be found on the outer edges, which are already starting to melt. One important thing to take away from this image is how thin the icecap really is, compared to its large size. 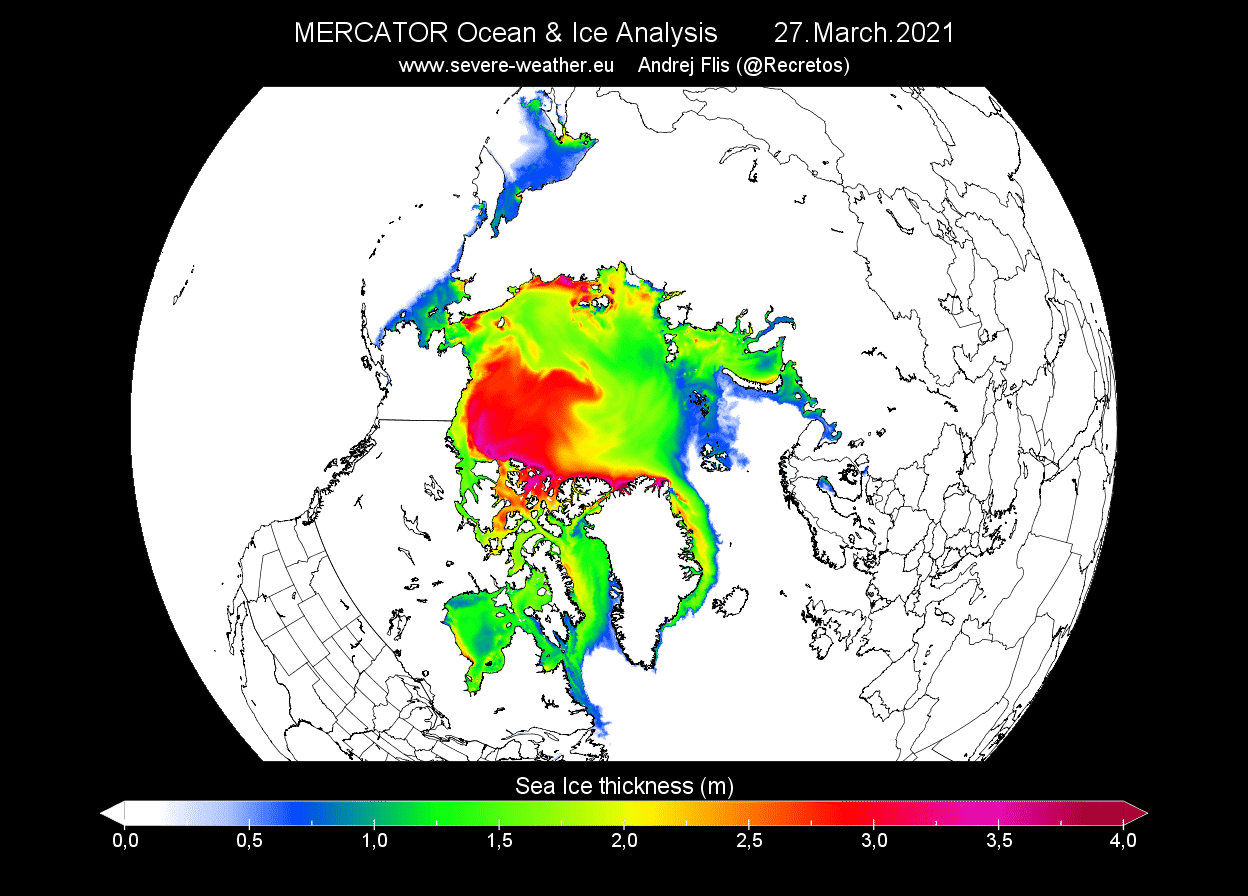 So, looking ahead, we have the temperature anomaly forecast below, for this week. We can see much warmer than normal temperatures over Greenland and the Greenland Sea, the Barents Sea, and the Kara Sea. These are the areas that will first see a reduction in sea ice concentration, as the melt season now slowly starts. 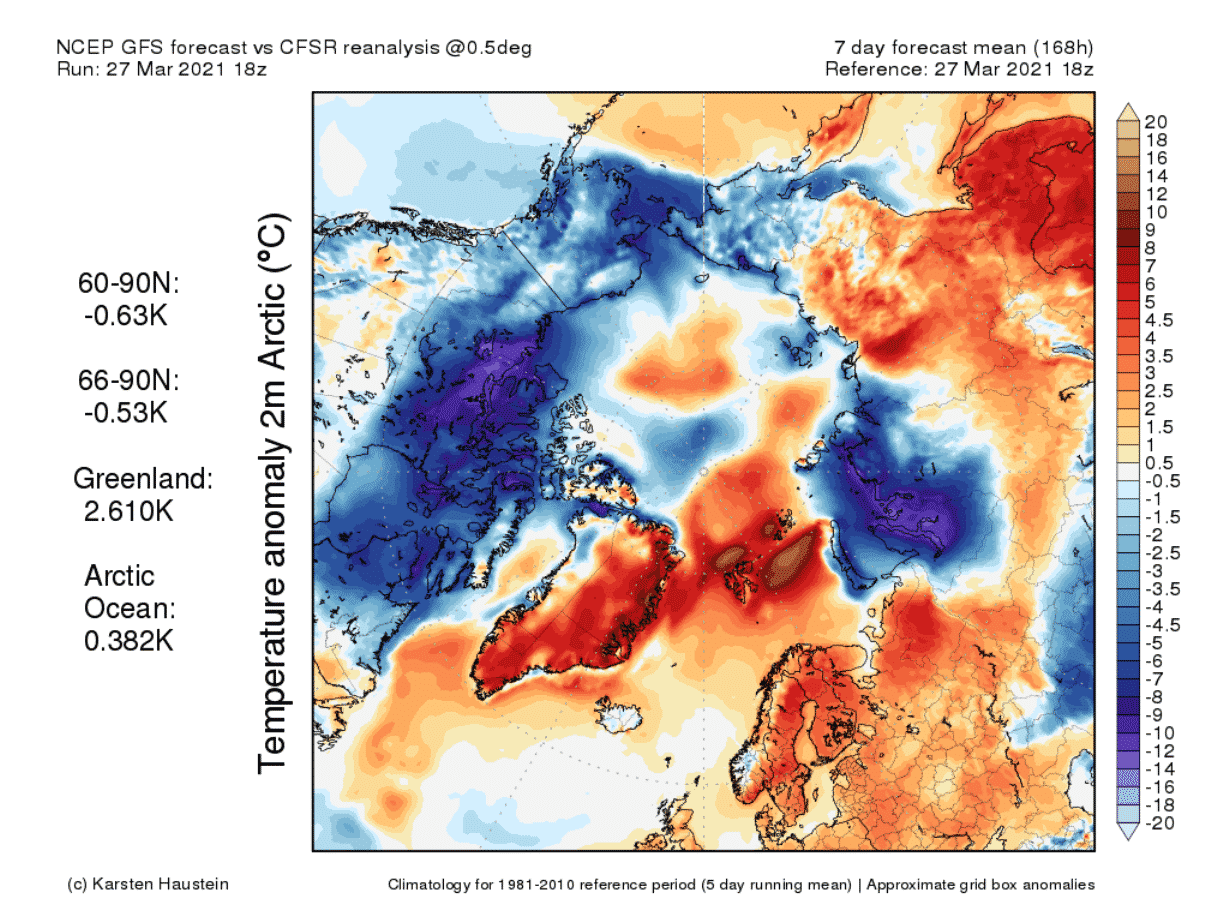 Not only air temperatures but ocean temperatures are also warmer than normal, especially in the Labrador Sea and around Greenland, and in the Beaufort Sea and the Kara Sea. This, combined with warmer air temperatures, will enable the melting process to begin in these regions. 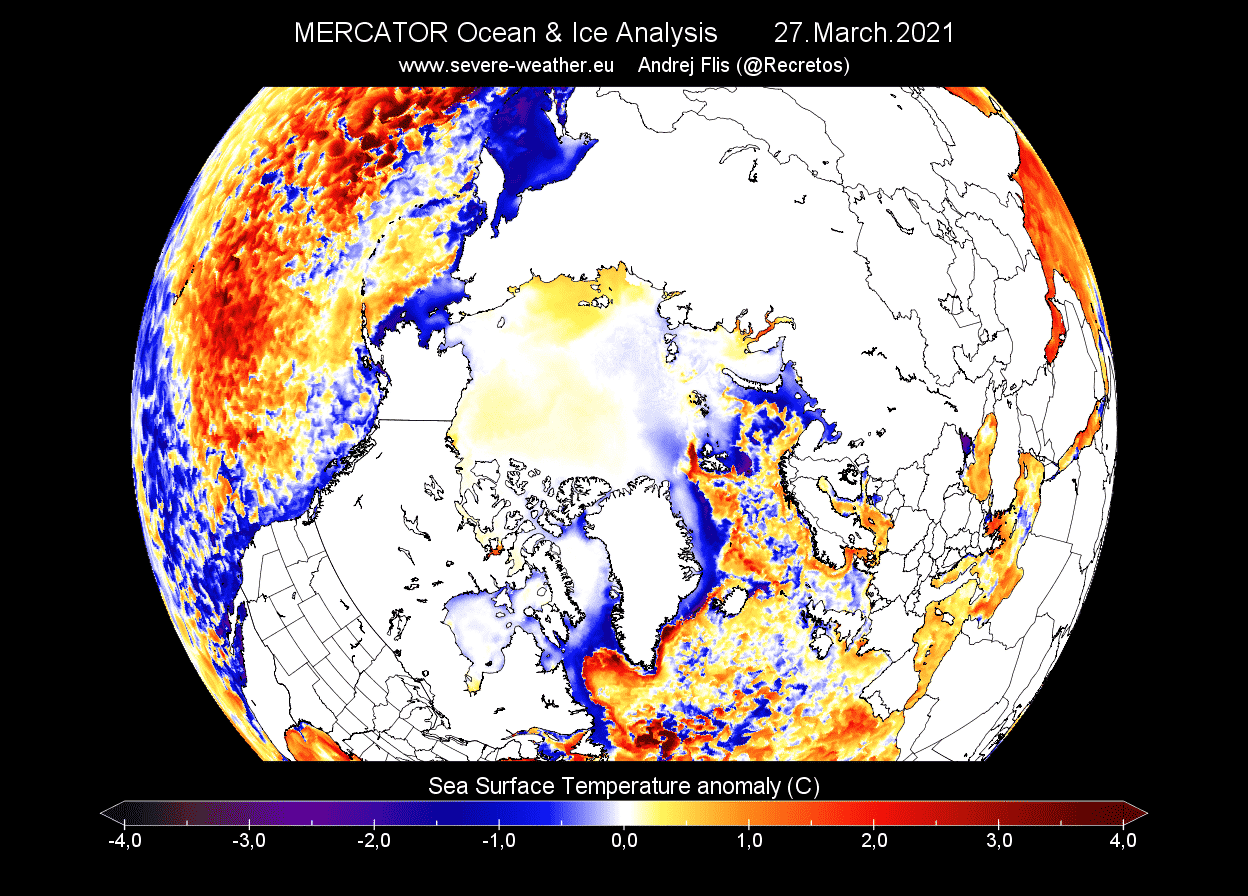 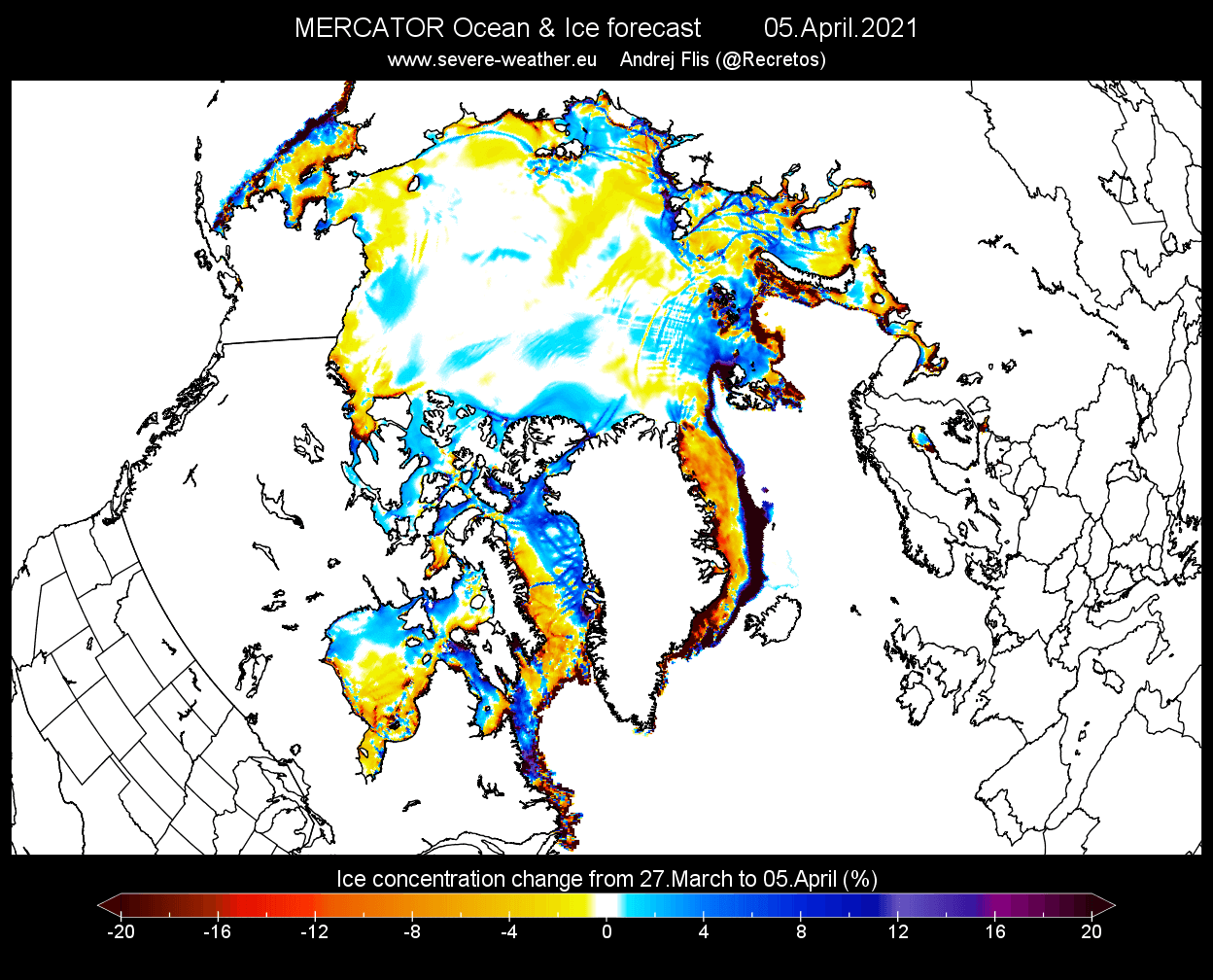 Looking at the Arctic sea ice thickness forecast below, you can see the outer edges of the sea ice reducing in thickness. Combined with the temperature forecasts we have seen, this is a clear sign of the start of the melting season. 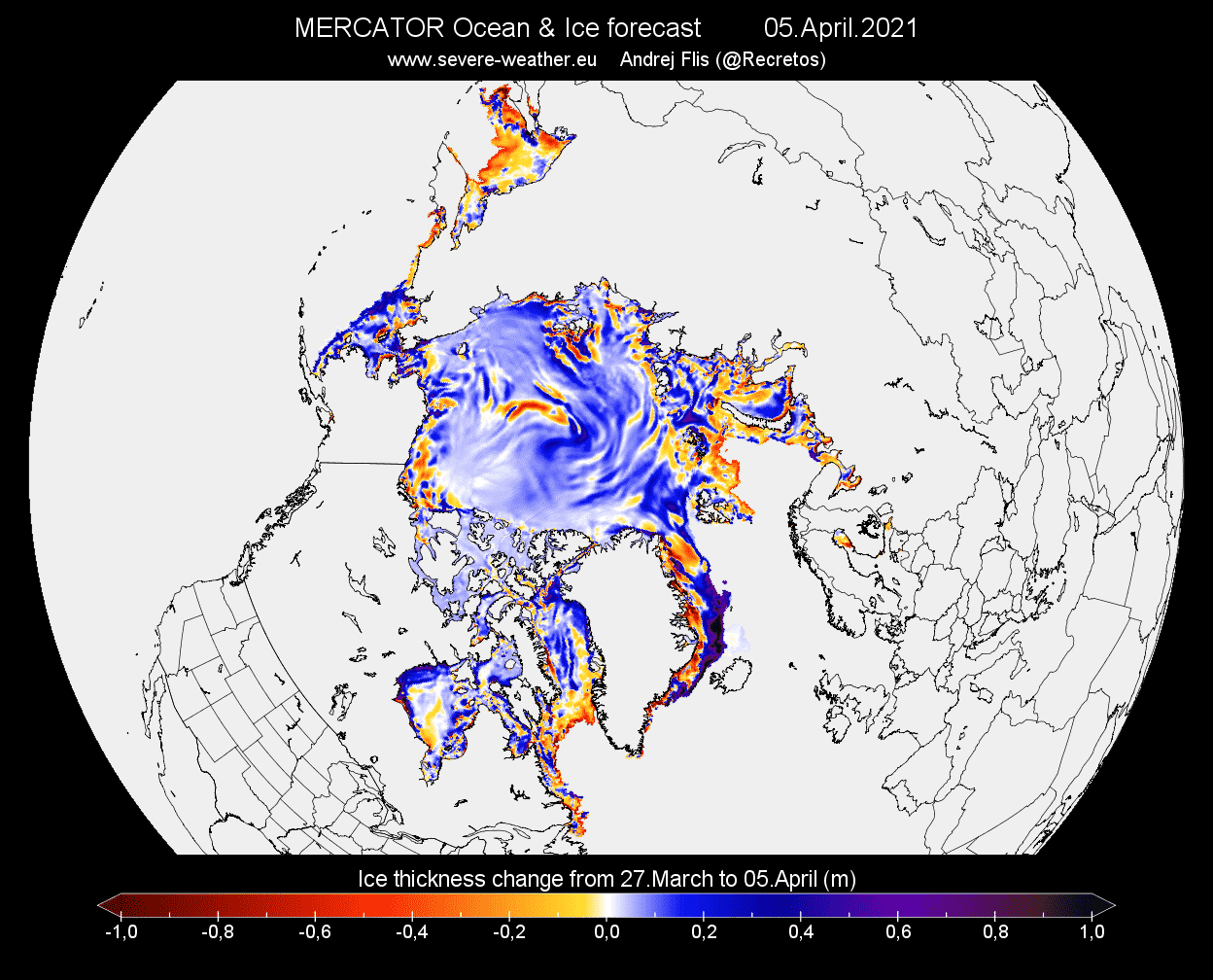 The current Arctic Sea Ice conditions are still fairly stable, with a larger sea ice extent than in some past years. That is even more impressive when we look at the global temperature anomalies during the Winter 2020/2021.

You can see on the image below, that the Arctic regions were much warmer than average. Only the Antarctic region was actually colder than normal in this period. Of course, 6 degrees above the normal is still deep freeze in the arctic (-20 instead of -26 degrees, for example). But the most sensitive areas are those further south, where normal temperatures around 0 are now +2 or +3, above the melting point. 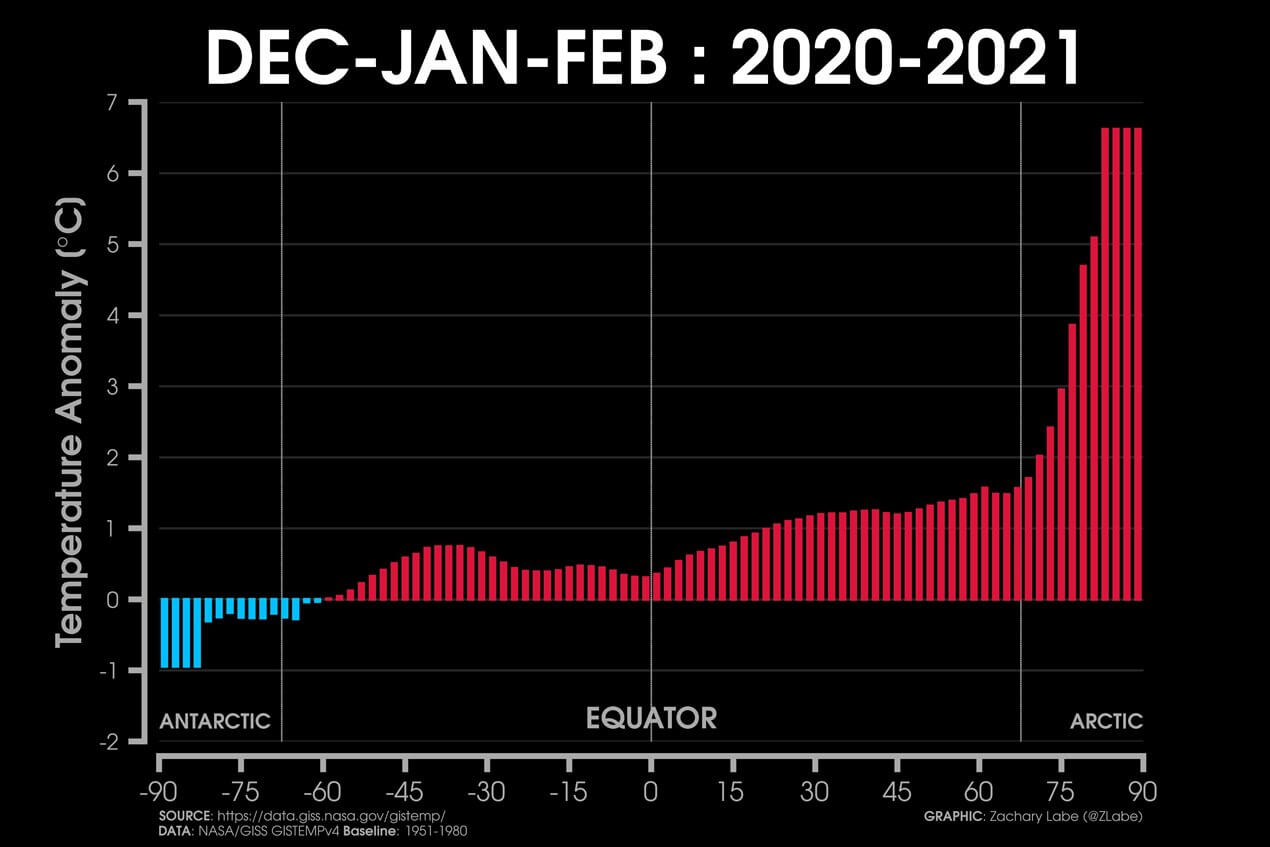 Below is a temperature anomaly analysis for the Winter 2020/2021, and we can see the much above normal temperatures in the Arctic regions and over northeastern Canada. Also, take note of the colder anomalies in the southern United States, with many winter storms and the huge cold outbreak in February. The main area of colder than normal temperatures was over western Siberia.

The reason for that is a unique pressure pattern. The image below shows the Winter 2020/2021 pressure pattern, with the main feature being the strong high-pressure systems over the Arctic Ocean, Greenland, and northeastern Canada. The high pressure over the Arctic regions has pushed out the colder air, into Siberia and into North America. The main culprit behind this is the Stratospheric Warming event in early January 2021. 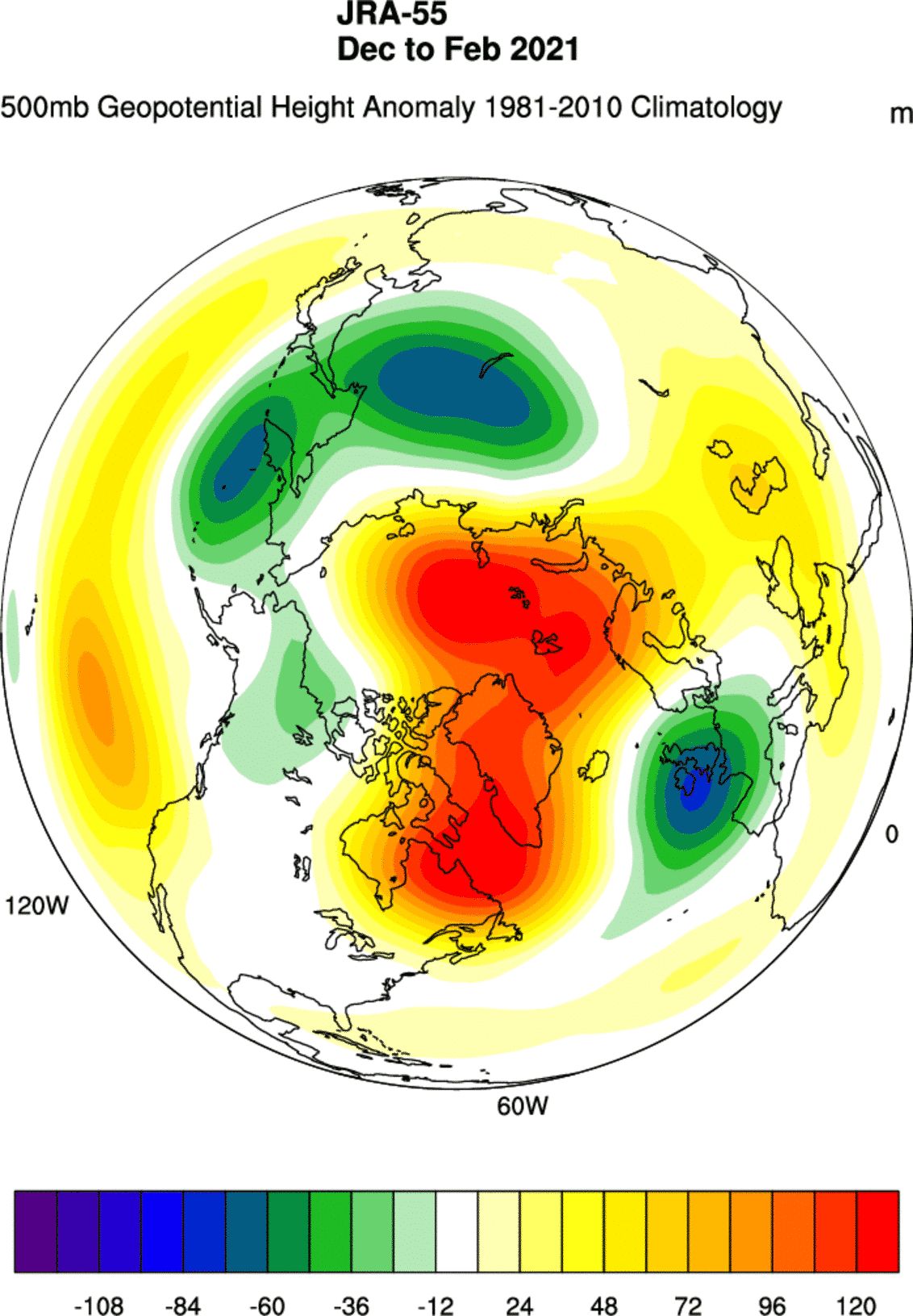 Looking at the last month of February, we have seen some of the strongest warm temperature anomalies this winter. As the polar regions were much warmer than normal, the colder air was transported out. Mainly it was transported into western Canada, and further down into the southern United States, and into Siberia on the other side. 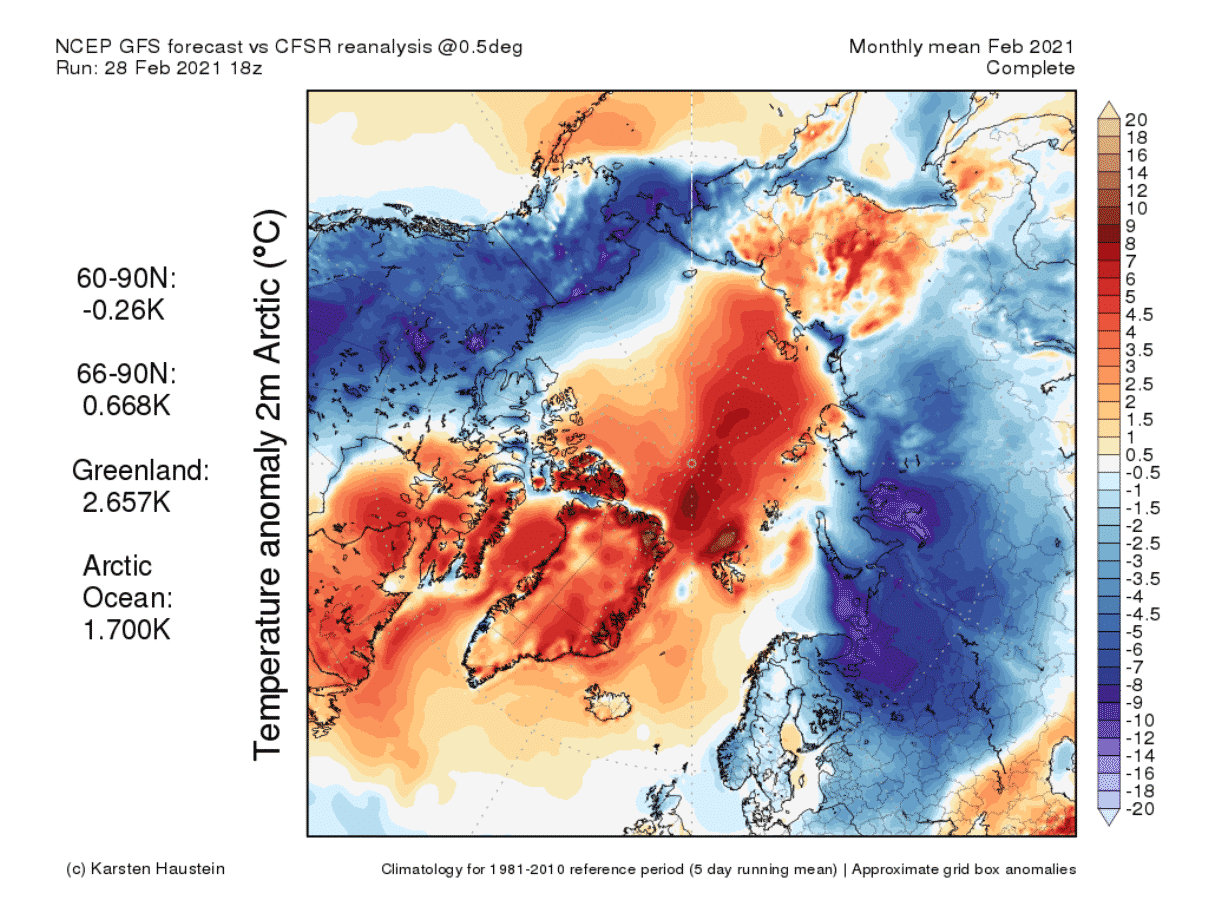 During winter 2020/2021, the Arctic sea ice volume was running below normal, continuing from the low volume in autumn. Currently, the sea ice is still increasing, at a decent rate, mainly in the central Arctic ocean regions. 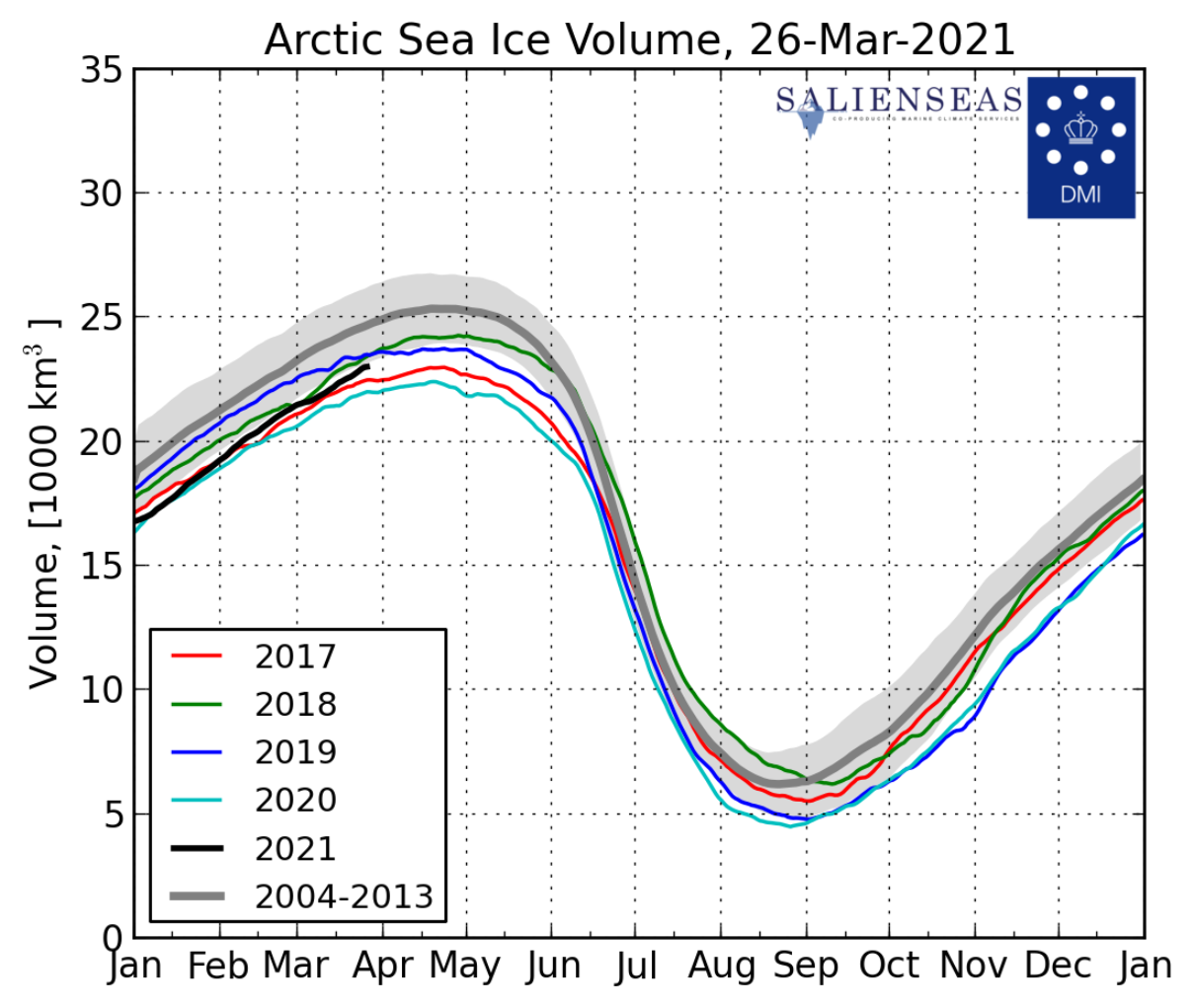 Looking at the past 40 years, we can see an obvious trend when it comes to the Arctic sea ice volume. The sea ice volume is decreasing quite rapidly. But if we look at the last 10 years, there is perhaps a slower decline than in the early 2000s. In the end, it is perhaps the long-term trend that matters, and it is on a stable decline, corresponding to the rise in temperatures, especially in the polar regions. 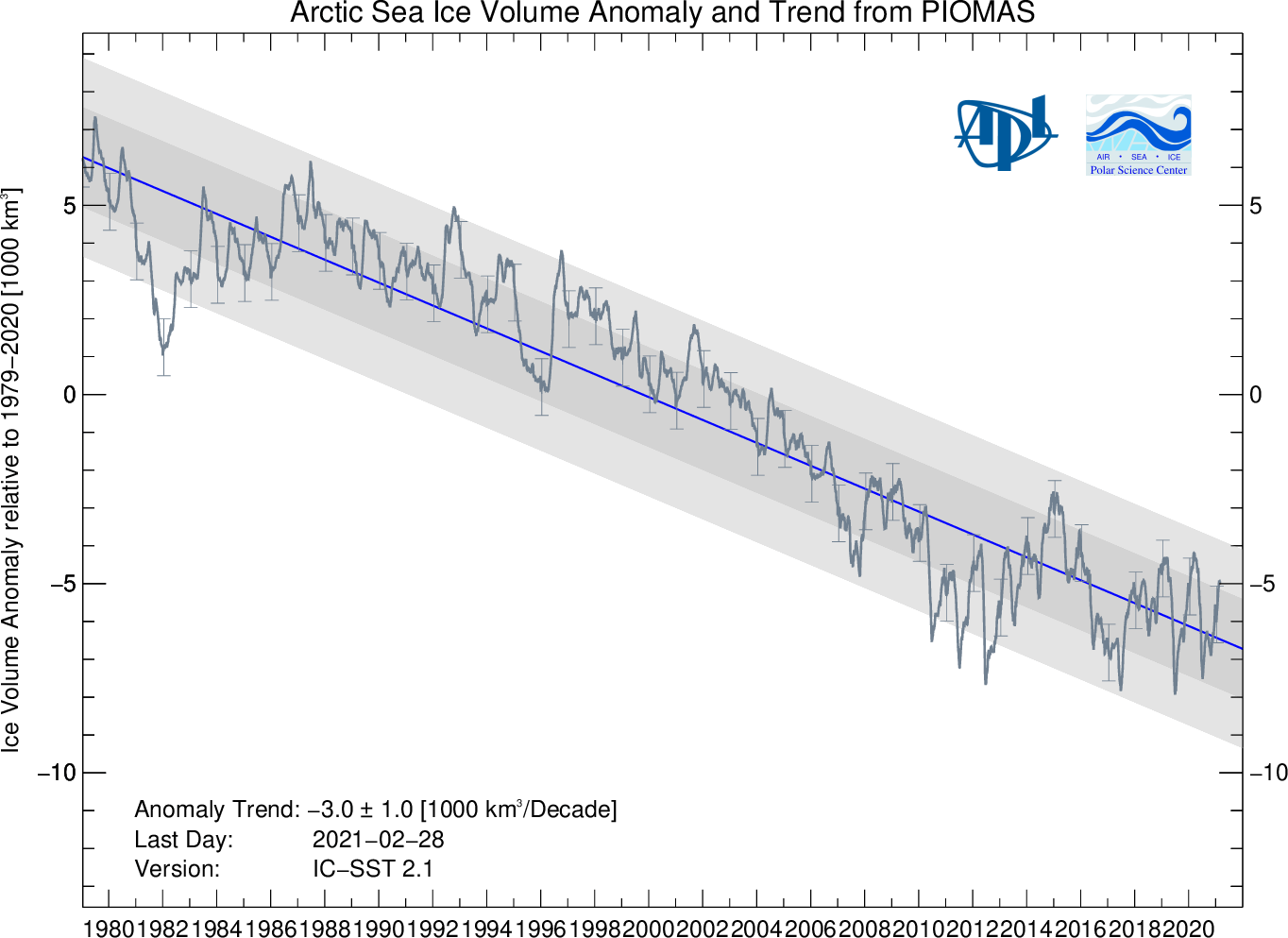 Arctic sea ice extent is also reducing across the main basin area. The image below shows the yearly extent, where you can see the extent reducing over the years, at least since the 80s and 90s. 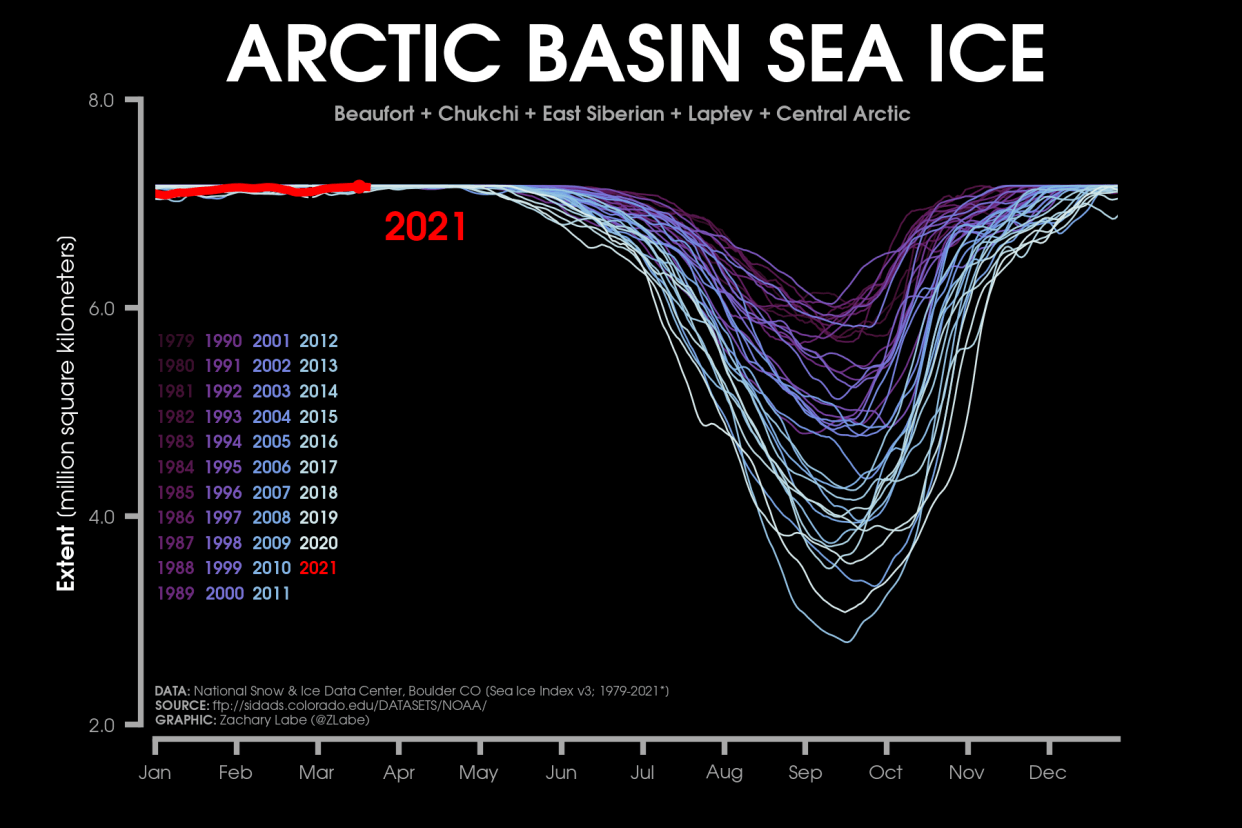 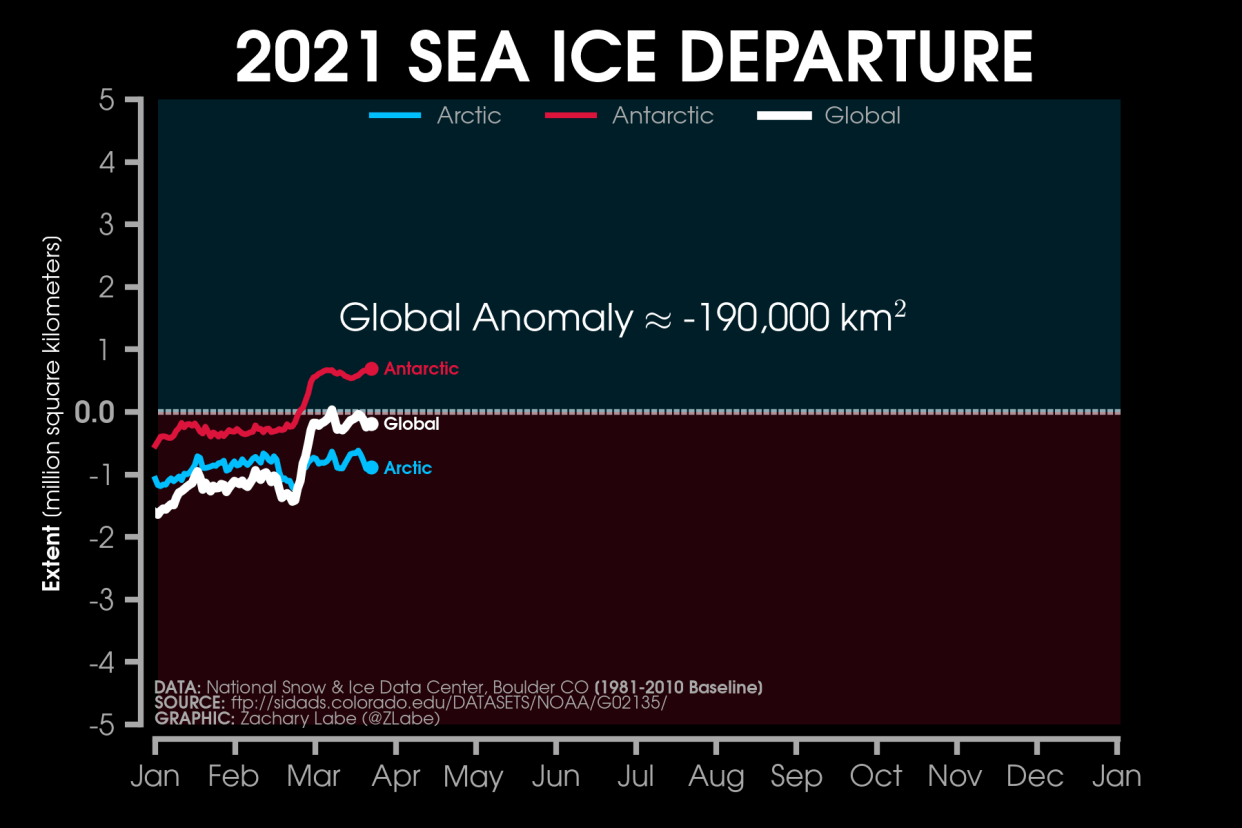 Looking at the actual extent analysis, we can see that most areas show a larger sea ice extent than the long-term average (orange line). The largest positive extent anomalies are in the central-western and eastern Antarctica. 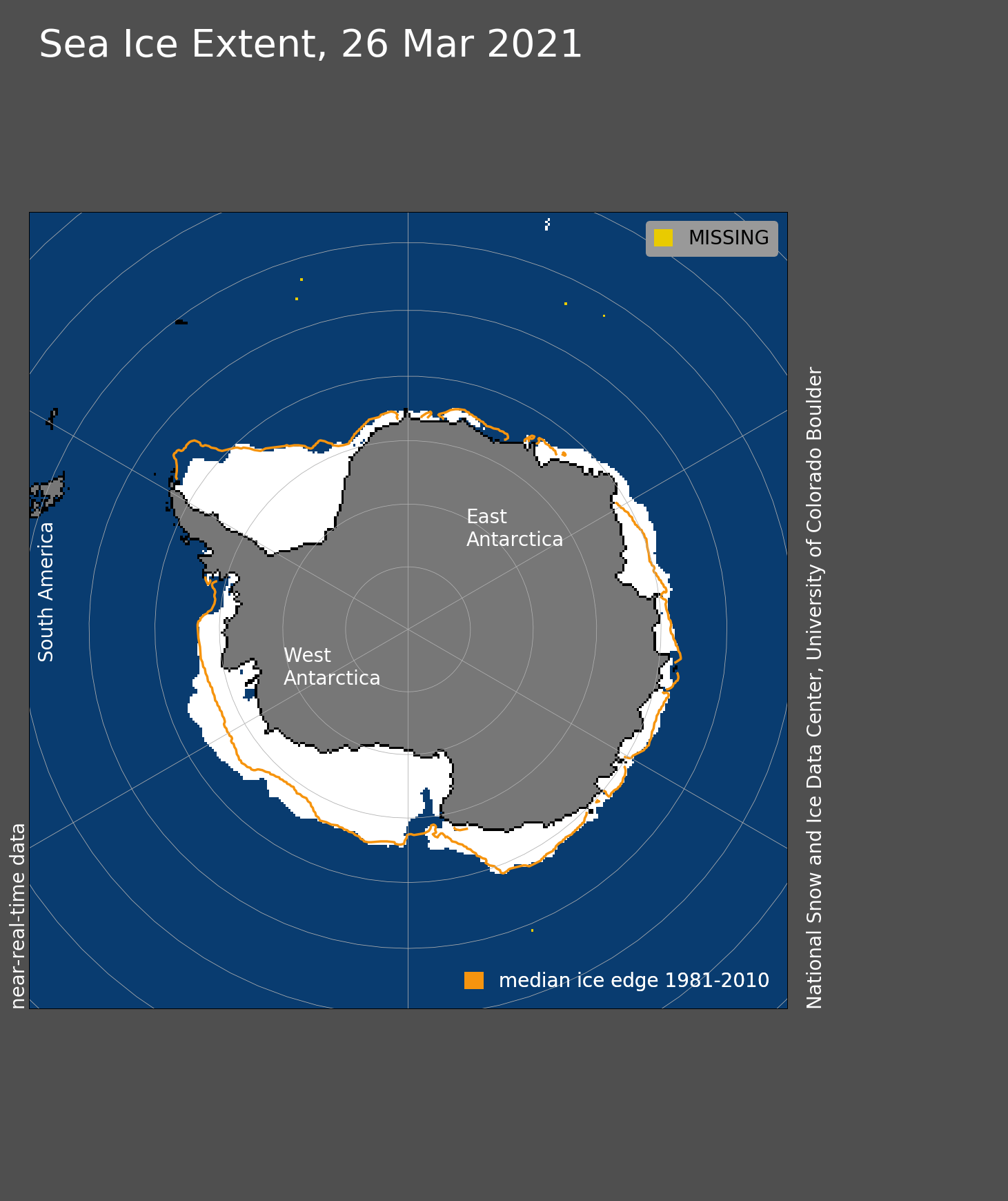 The line graph extent analysis reveals the rapid ocean freezing in early March. At that time, it lifted the sea ice extent to above normal values, which are still holding to this day, and are forecast to continue. 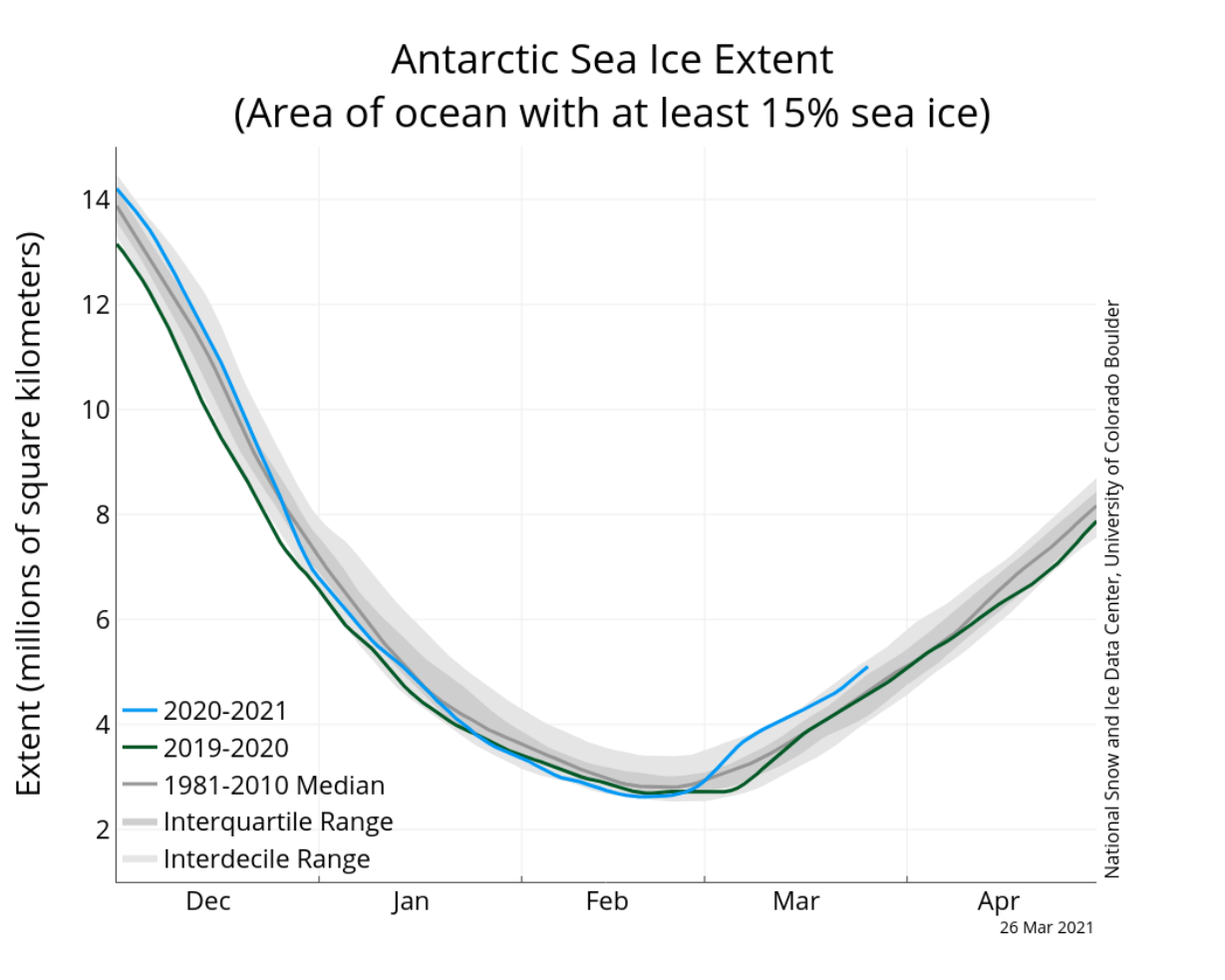 We all want to know what low sea ice extent values will we reach during the 2021 Arctic ice melt season. Below you can see the Spring/early Summer temperature anomaly forecast from the CFSv2 model. Most of the Arctic regions are well above normal. Such temperature distributions can strongly boost the Arctic Sea Ice melt season.

Looking at the actual Arctic sea ice extent forecast, it is quite shocking to see. The model predicts the peak of the melt season well below 4 million km², nearing 2 million km². This would be an ultimate record, not far away from the “Blue Ocean event“.

A blue ocean event would be declared if the Arctic sea ice extent reaches just 1 million km² or less. It practically means an almost ice-free Arctic ocean, hence the name “blue ocean event”. But the CFSv2 model is not known for its accuracy. It tends to show a lower sea ice extent than it actually ends up being, but this forecast is the one of the lowest seen, released in March.

And below is the actual forecast of the Arctic sea ice concentration in September. We tend to focus on September, as it is the month when the sea ice area is at its lowest point. This forecast shows a very small sea ice area, which would be a certain record. The lowest value so far was reached in September 2012, at just 3.4 million km². 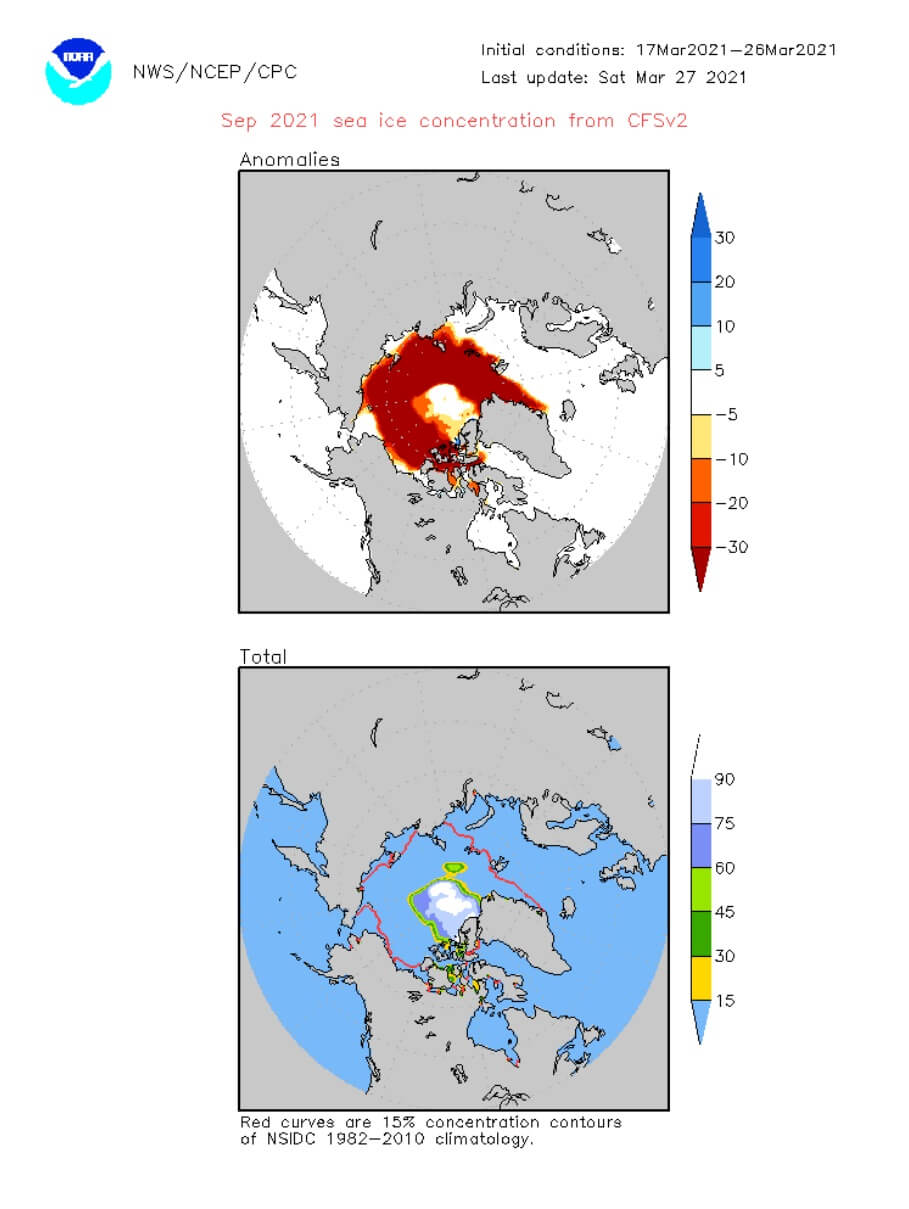 We will keep you updated as fresh data is available, and more reliable projections can be made. Make sure to bookmark our page, or click on “show more” if you are reading this article from the Google Discover feed.

Earth’s record low temperature of -111 °C recorded atop of the thunderstorm clouds in the tropical Pacific on Dec 29th, 2018