Iceland is a land of fire and ice. It is also a land of volcanoes and earthquakes, and they usually come in abundance. On Sunday, the aviation color code has been raised to yellow for Reykjanes area, due to the detection of magma accumulation under Mt. Thorbjorn. UPDATES ARE ADDED ON THE BOTTOM

Mt. Thorbjorn is a volcanic mountain, located on the Reykjanes peninsula. Since January 21st, ongoing inflation has been detected under the mountain, with its center slightly west of the mountain. The inflation is unusually rapid (3-4 mm per day). So far, the total uplift of the ground has been measured at around 3-4 cm. The ground deformation has been detected both on continuous GPS stations and in InSAR images. The inflation is most likely a sign of magma accumulation at a depth of around 4-5 kilometers. The recent volume estimates put the size of this magma intrusion at around 1-2 million cubic meters (0,002 km3). This is the conclusion of a meeting held with the Scientific council of the Civil Protection at the IMO (Iceland Met Office). The graphic below shows the seismicity on the Reykjanes peninsula in the past 48 hours. We have marked the relative location of Mt. Thorbjorn. The bottom graphic shows earthquake magnitudes. 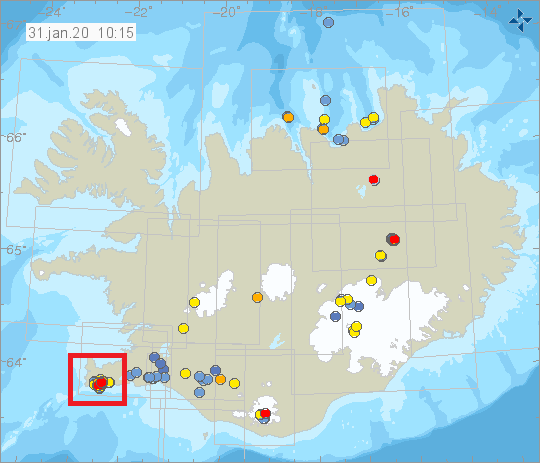 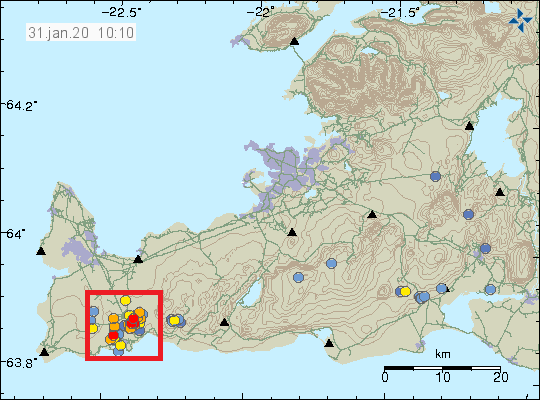 Ground deformation is being measured regularly on the Reykjanes peninsula for the past few decades. In the past 30 years, no such inflation signal has been found, which makes this current episode quite unusual. The largest earthquakes occurred on January 22nd and were an M3,7 and an M3,6 earthquake. They were felt widely on the Reykjanes peninsula and all the way to the Borgarnes region. The earthquake swarm is currently still ongoing, with less energy, but with quite stable numbers. Earthquake swarms are quite common and in the area, which is tectonically very active. But the fact that rapid inflation is occurring alongside the earthquake swarm, is a sign of concern and requires closer monitoring. The first graphic shows a closer look at the mountain, and the earthquake activity. The second graphic shows earthquake numbers, depth and magnitudes over time in the past days. The area is for the Reykjanes Peninsula, but the majority of this activity comes from around Mt. Thorbjorn. Both graphics are from IMO. 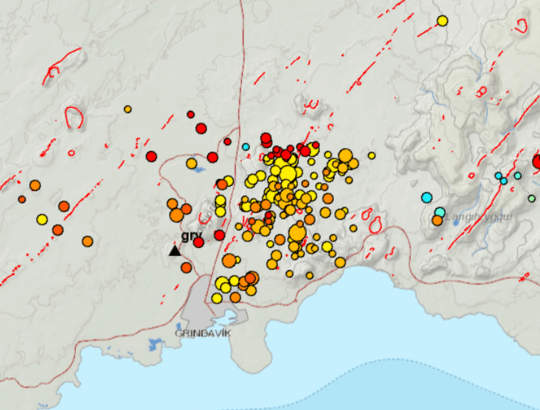 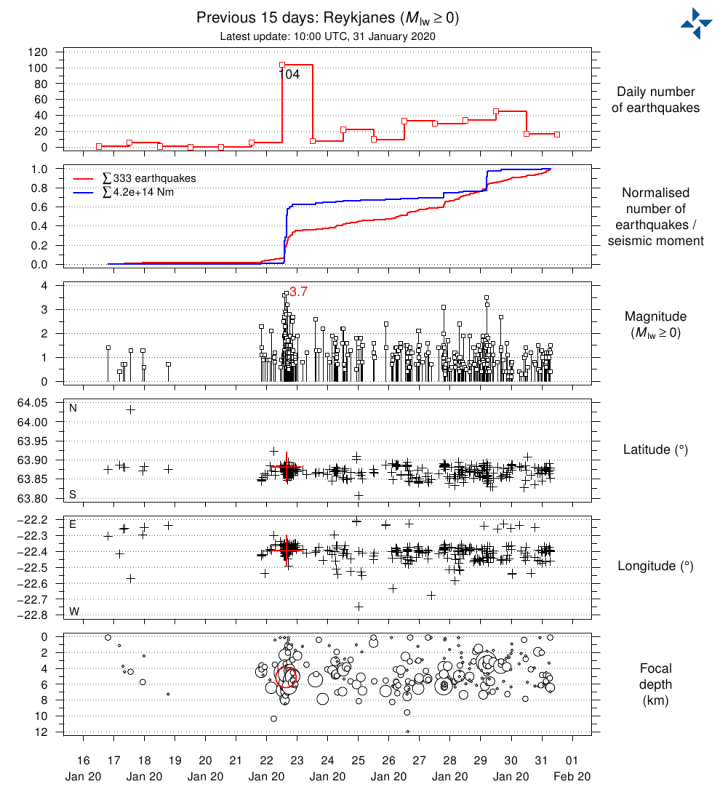 The graphic below, provided by Iceland Met Office, shows the ground inflation between 18th and 24th January, as measured by the Sentinel-1 satellite and calculated with the InSAR technique. 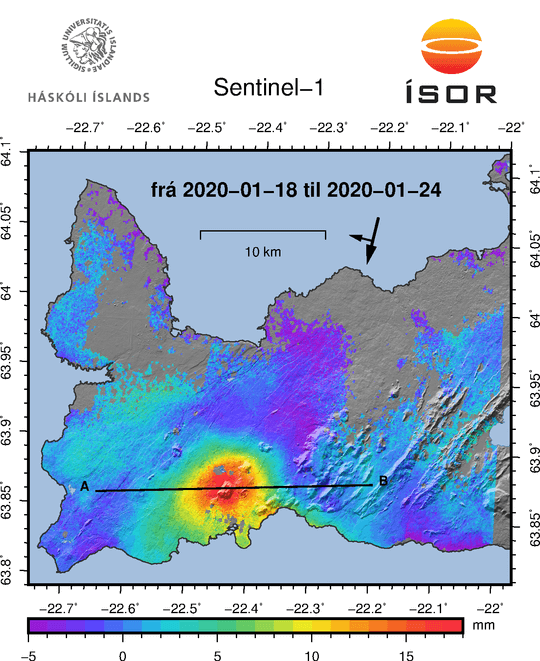 Earthquakes are generally common in this region. They are mostly of tectonic origin, but due to the unique geological setup of Iceland, there is a very short step between tectonic and magmatic swarms. Magmatic meaning that hot molten magma can rise through the crust, also causing earthquakes as it cracks upwards through the ground. The volcanic eruptions in this region of Iceland, are not by default explosive. Here there is little to no ash being produced because the erupting lava does not come into contact with ice or water, which is what in most cases causes the explosive ashy eruptions in Iceland. Here we see effusive eruptions, similar to the 2014 eruption of Bardarbunga (Holuhraun). Tho these eruptions do not pose a direct threat to aviation, they can still be dangerous for human and wildlife health. Such eruptions can usually release a high amount of sulfur gas and other gases, which can be very hazardous for health. The graphic below shows an example calculation, where the volcanic gases would travel in the next 3 days if there were an eruption today. This is just a simple calculation, considering if there would be a bigger eruption with lots of gas emissions.

UPDATE 02/February 18:00UTC
Earthquakes continue at Grindavik and under Mt. Thorbjorn. Over 1000 earthquakes have now been detected in the past 10 days. This is the official statement from IMO: “Ongoing earthquake activity is measured around Grindavík but the intensity of the swarm has decreased. Around 150 earthquakes have been located since midnight, the largest one M3.3 at 09:00 (2.nd of February). The earthquake was felt in Grindavík.

Since the 21st of January over 1000 earthquakes have been located in the area, thereof, around 700 over the weekend. Most of them are located in a SW/NE line around 2 km NE of Grindavik. 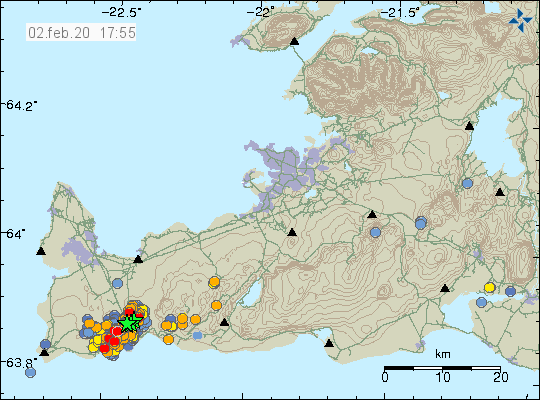 Below: Earthquakes in the past 7 days – from VolcanoDiscovery 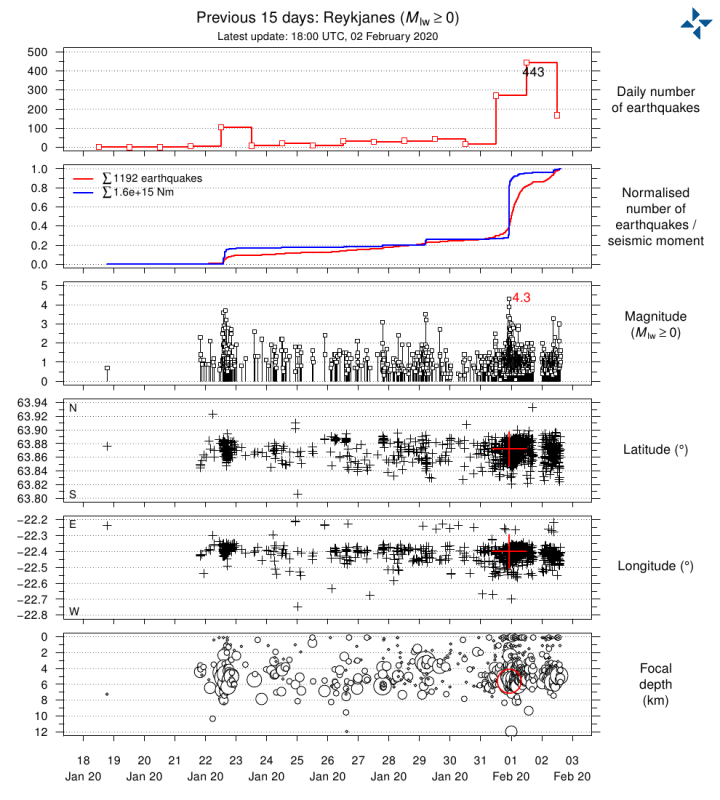 UPDATE 01/February 8:00UTC
Overnight, a strong earthquake swarm has occurred in the Grindavik area, at Mt. Thorbjorn. This is the official statement from IMO: “Ongoing earthquake activity has been recorded around Grindavík. Yesterday evening at 22:22 a M4.0 earthquake occurred approximately. 5km NE of Grindavik and another one M4.3 at 22:24. Over 500 earthquakes have been measured since yesterday noon. No signs of volcanic tremor has been detected. Over 100 reports have been received, that the earthquakes have been felt in Reykjanes, the capital area and north to Borgarfjordur. These are the largest earthquakes since the activity started the 21.st of January.” 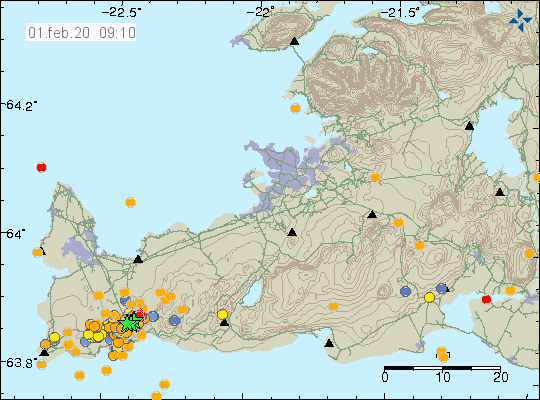 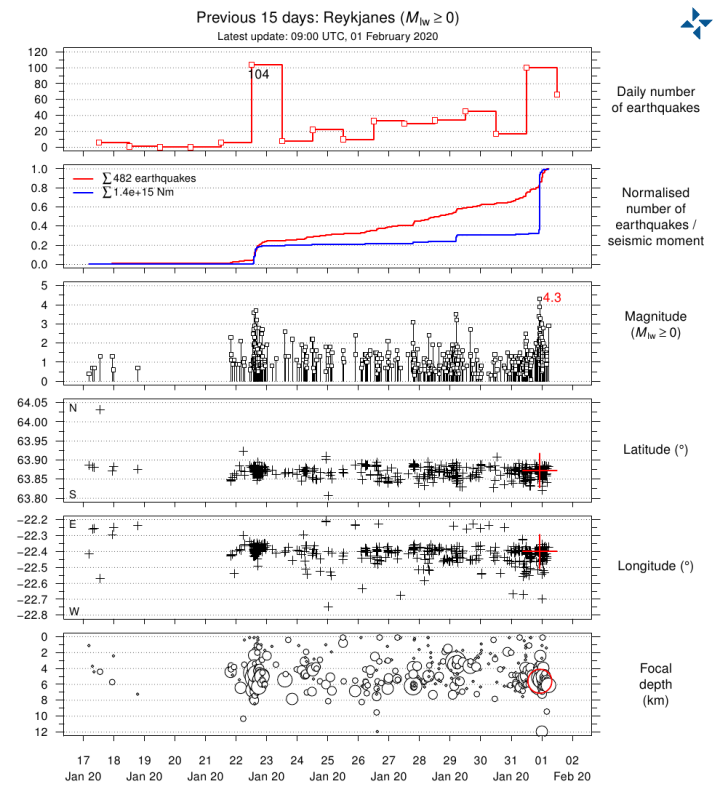 We will keep you updated on any important further development. While you wait for more updates, don’t miss the latest 10-20 day forecast and what is in store for the rest of the winter: