Iceland is a very well known volcanic island in the North Atlantic. It is one of the most active volcanic regions in the world, and as history shows, its eruptions can sometimes have powerful impacts on Europe and the entire Northern Hemisphere.  Iceland is powered by the spreading of the Mid-Atlantic Ridge (MAR), combined with a vertical plume of hot molten rock from the mantle, also called a hotspot, that lies beneath Iceland (similar as the hotspot under Hawaii). Its more commonly called the Icelandic plume. 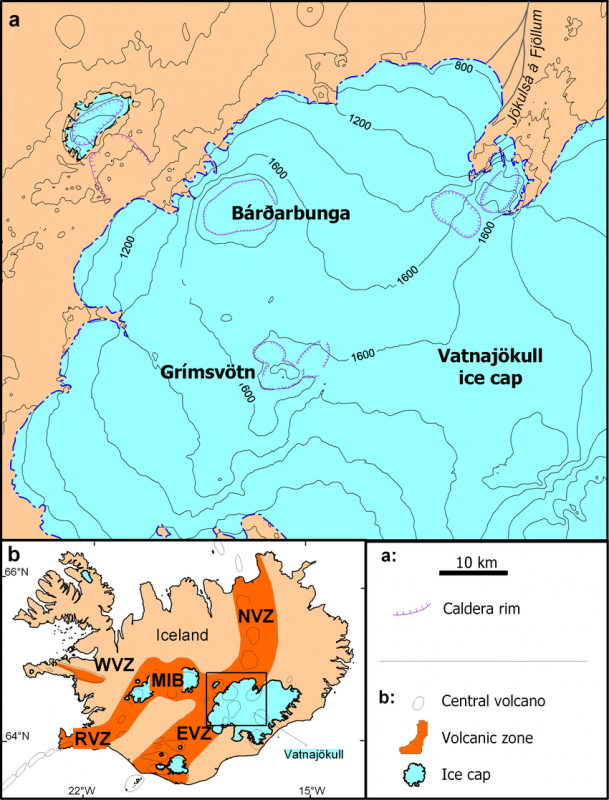 A map of Iceland and its ice caps. From Saemundsson, 1979

The plume has periods of higher and lower activity. We have entered the new period of increased activity, also called the plume cycle. This plume lies under the whole of Iceland, but its very center lies under the mighty glacier called Vatnajokull. It is the largest ice cap in Iceland, and the largest ice cap in Europe. It covers roughly 7.900 km2. Under this glacier, many different volcanoes are hidden from sight, covered by hundreds of meters of solid ice and snow, thousands of years old. There are only brief surface signs that something dark and powerful is buried beneath the ice. 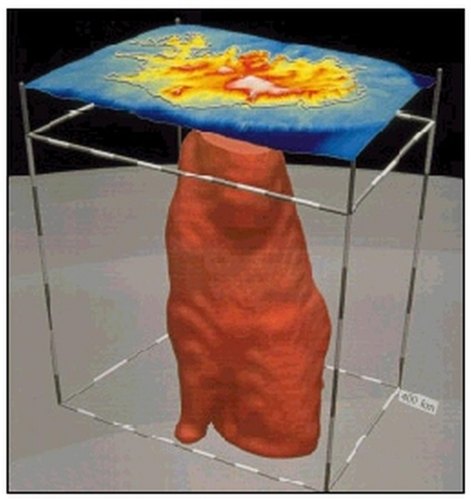 A graphical depiction of the mantle plume under Iceland, down to 400km depth,  from Wolf et al., 1997

Around every 4-6 years (on average) there is a volcanic eruption in Iceland. Last one was in August 2014, from the Bardarbunga volcano, which lies under the north-west part of the Vatnajokull glacier (see the first image). The actual eruption took place over 40 km away from the central volcano, outside of the glacier area, as the hot magma traveled horizontally under ground and away from the volcano, before reaching the surface.  Prior to those events, we had an eruption in May 2011, from the Grimsvotn volcano, another powerful volcano that lies under the Vatnajokull glacier, almost in its center. It was the largest explosive eruption in almost 100 years in Iceland, with the ash plume rising over 15 km high. The ash cloud caused some air travel disruption, cancelling around 900 flights across Europe. That is a relatively low number, compared to 95.000 flights that were cancelled just a year before, in the spring of 2010, as the Eyjafjallajokull volcano erupted, sending the ash cloud over Europe, affecting the global air traffic and damaging the global economy for billions of €. 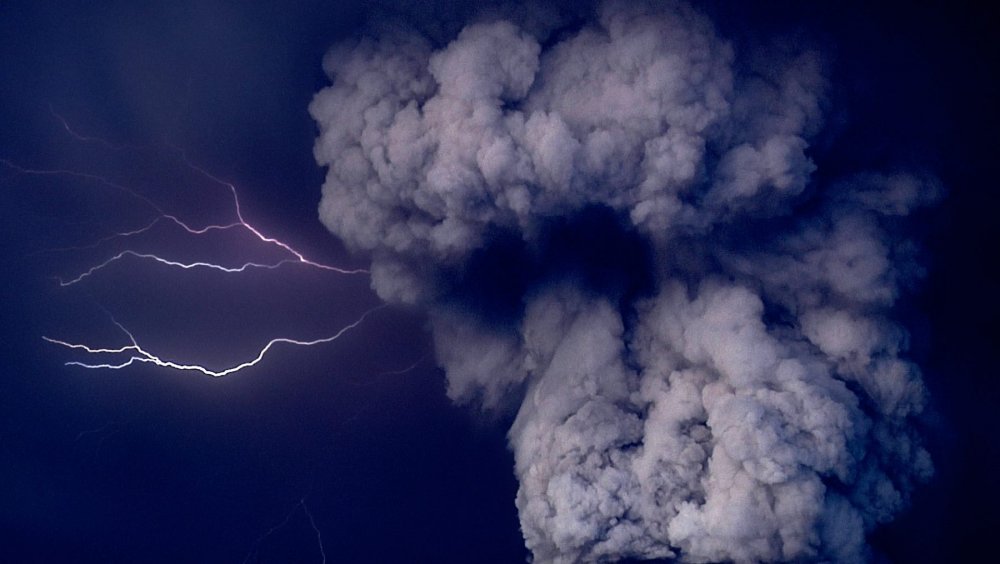 Lightning in the 2011 Grimsvotn ash plume. Photo by: Jon Gustafsson

The 2011 eruption of Grimsvotn was much bigger than the 2010 eruption of Eyjafjallajokull, yet it caused only 1% of the total flight cancellations that we have seen during the 2010 eruption. That is because in 2011, the high altitude winds carried the ash cloud mostly away from Europe, and because new air traffic rules and tolerances were introduced following the 2010 eruption. They limit flight cancellations to only when a certain concentration/amount of ash is reached or detected at the airplane flight level. The 2014 eruption of Bardarbunga caused no air traffic problems (except very locally), since it was a non-explosive eruption, with minimum ash production that was relatively low and local. It was still a big eruption by volume, but it was erupting hot molten lava, in a Hawaii style eruption, outside of the glacier area, which means that the hot lava did not come into direct contact with ice, which is what usually causes explosiveness and large amounts of ash in Iceland. We usually see that from volcanoes that erupt under ice (a sub-glacial eruption), when the rising hot magma meets ice (or water/lake under the glacier) on its way to the surface, causing an explosive reaction. 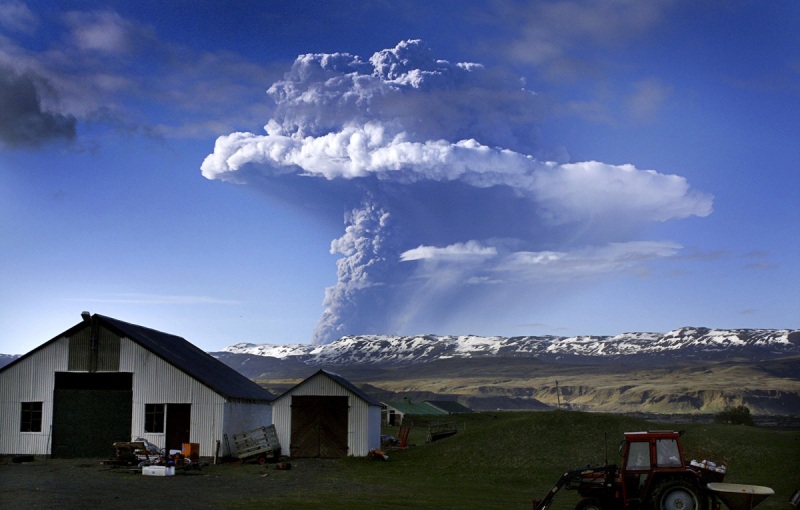 Start of the Grimsvotn 2011 eruption. Photo from: STR/AFP/Getty Images

Grimsvotn volcano is not your typical sharp-mountain pointy shaped volcano. It is a caldera complex, made out of individual calderas. A caldera is a depression in the ground, formed as the ground sinks after an eruption, down into the void under the volcano, which was previously occupied by the magma that has now erupted. Some of the strongest volcanoes in the world are actually large calderas. 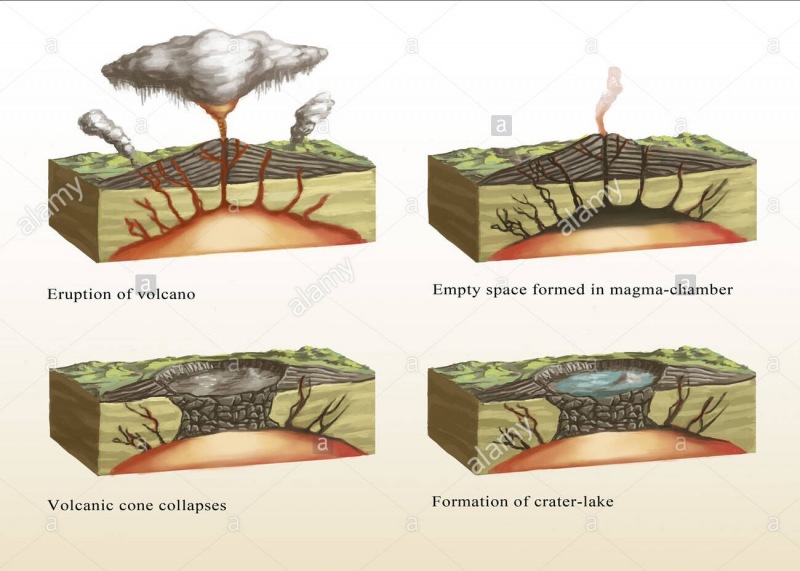 An illustration of a caldera formation. Image from: Alamy stock images

Grimsvotn is a relatively steady eruptor, with its last 3 eruptions being in 1998, 2004 and 2011, all explosive. This gives an average of about 6-7 years between last eruptions. Its last eruption was in 2011, which is 8 years ago, but it was a big eruption, so the volcanic system takes more time to recover and recharge. Some say that Grimsvotn is overdue for an eruption, but volcanoes are never overdue, since they can change their behavior at any time. The Grimsvotn volcano can sleep for more than 15 years without an eruption, but that is a relatively rare occurrence in the modern records.

Current data indicates that Grimsvotn has entered its last phase before the eruption, and is currently one of the top 3 candidates for the next big Icelandic eruption, along with Hekla and Katla volcanoes. Hekla is a safe bet for an eruption at any time, without much prior notice and with less than a few hours of intense earthquake activity. At Katla on the other hand, we will see a few days to weeks of intense earthquake activity as it finally builds up to an eruption. On the graphic below we can see the location and current status of all the main volcanoes in Iceland, monitored by the Icelandic Met Office (IMO). Green color means that the volcano is in its normal, non-eruptive state. 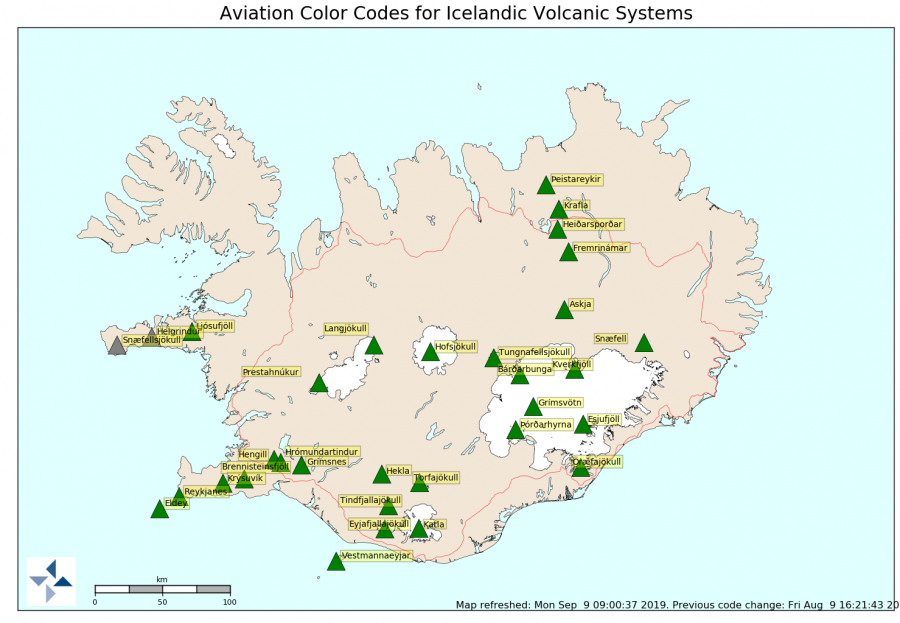 We are tracking a slow but very steady increase in the number of earthquakes at Grimsvotn. In August 2019 we saw the highest monthly earthquake rate since the last eruption in 2011. A steady and persistent increase in earthquake activity is usually one of the main signs that a volcano is slowly getting close to an eruption. The graphic below shows the earthquake rate over time, produced by the Icelandic Met Office (IMO). 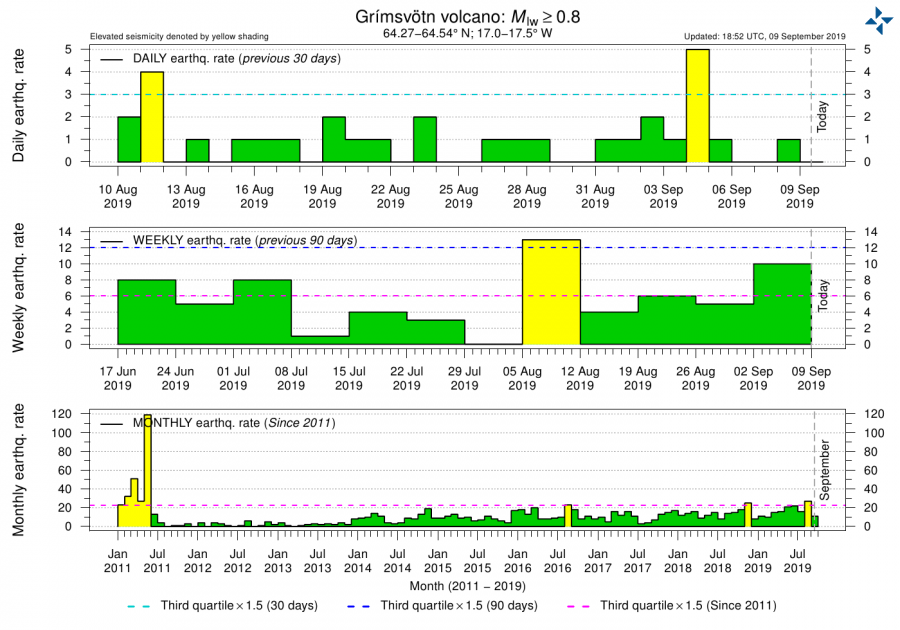 But, earthquake numbers only tell us only one part of the story. Sometimes it is more important to look at the earthquake power and energy release. Two or three strong earthquakes can have a bigger impact than 10 smaller ones. The plot below by IMO, shows the earthquake energy release at Grimsvotn, and it is fairly simple to read. We see that a certain amount of energy release has to be reached, for Grimsvotn to start an eruption. That is directly related to the pressure increase in the volcano. We are slowly getting close to the eruptive values. The trend has increased lately, and with stronger earthquakes and more pressure in the volcano, it is possible for Grimsvotn to erupt within the next 4-12 months. 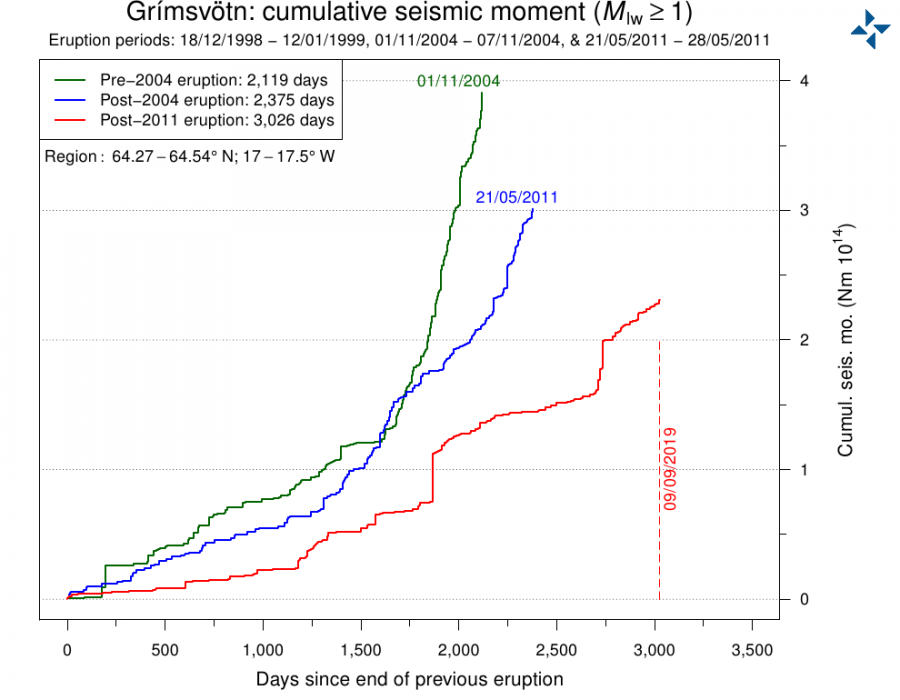 But to be more certain, we also need to look at ground movement around the volcano. We need to find signs that earthquakes are being caused by the fresh hot magma that is entering the volcanic system underground, accumulating there and increasing the pressure in the volcano. Kinda like inflating a balloon until it explodes. The process of accumulating magma and ground deformation is called inflation (like a balloon). Grimsvotn is one of the most steady inflating volcanoes in Iceland, as seen on the monitoring equipment. As it lies very close to the center of the Icelandic plume, it has a constant feed of fresh material into its magmatic system. The plot below from IMO, shows the data from a GPS station at Grimsvotn, which is monitoring the ground movement. What is most important here is the very bottom graph, which shows the ground moving up or down. We can see that since the last eruption in 2011, the ground at Grimsvotn has raised for more than 40 cm! That is due to the magma accumulating under the volcano and causing enough pressure to push the ground up. It is a normal occurrence at most volcanoes that are getting ready to erupt, but the amplitudes can vary greatly from one volcano to another. What is just normal inflation for one volcano, can be very significant for another. There is no rule that would tell us how much a volcano has to inflate before it erupts. 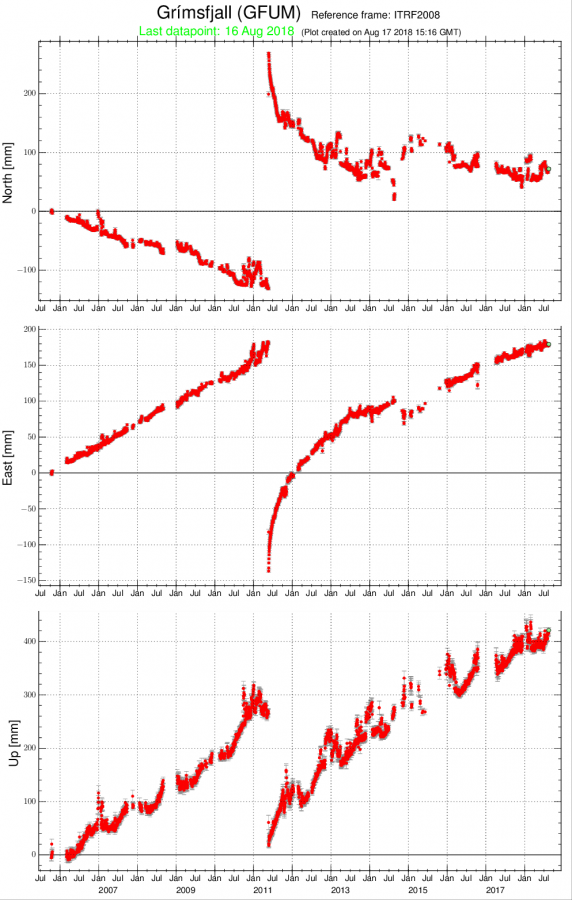 Grimsvotn is a very likely candidate to have a large explosive eruption in the near future. It is powerful enough to have an effect on Europe and all around the Northern Hemisphere, as history teaches us. We will keep a close eye on Grimsvotn and all the volcanoes in Iceland, informing you of any significant development.

The official agency in Iceland for monitoring volcanoes, is the Icelandic Meteorological Office (IMO), where you can find live data, additional information, and all official warnings.