Iceland is on a roll! While Askja volcano still continues its own earthquake swarm, a strong burst of earthquakes occurred on the Reykjanes Ridge, just of the SW coast of Iceland.

Earthquakes are focused on a specific area. The whole ridge had historical eruptions before, which have built the islands that are currently underwater. Most of those underwater islands are submarine volcanoes. The burst of earthquakes was fast and strong. Stars on the graphic indicate earthquakes with a magnitude higher than 3, so this is obviously a pretty strong swarm. The strongest earthquake had a magnitude of 4.5! Such powerful bursts of earthquakes are an occasional occurrence in these parts, but the power can vary. They occur due to the spreading of the North American and Eurasian tectonic plates, and the magma rising upwards between these plates, as they move apart. 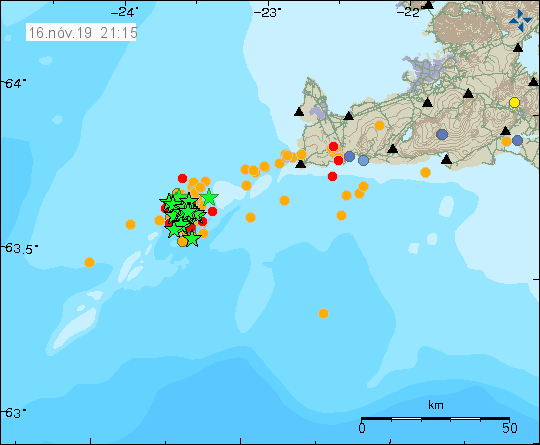 Looking at the time-plot, not all earthquakes have been added on the list. The main problem is the coverage of the area by seismometers. Reykjanes Ridge is underwater, so there is no place to set up any monitoring equipment. In most cases, only earthquakes stronger than magnitude 2 are listed and manually verified. Interesting information on this plot is the depth of this swarm. It goes down from the surface down to 25 km. That is the thickness of the crust, so it is likely that some magma has entered the system during the swarm. 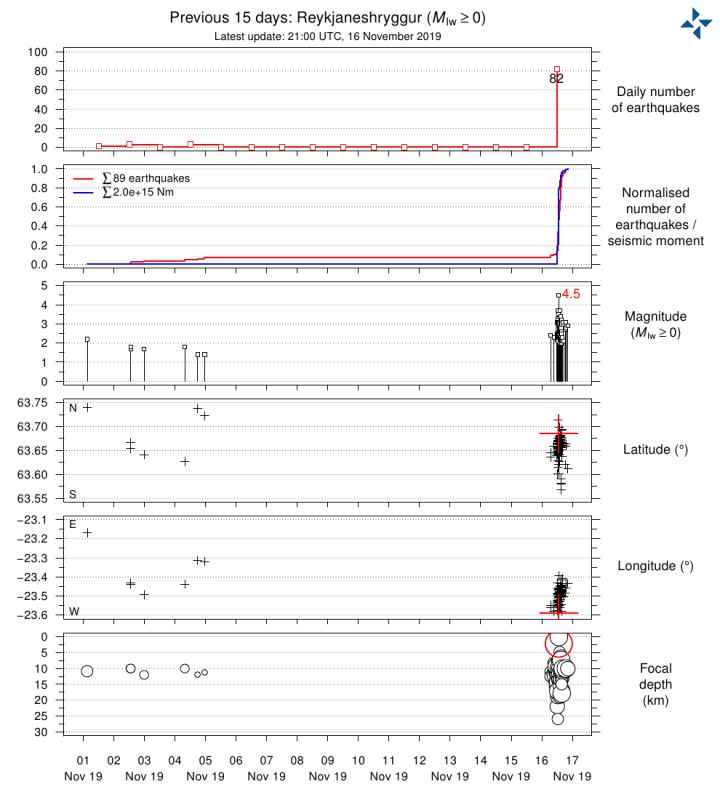 So far, this earthquake swarm looks to be mostly tectonic in nature, caused by the natural spreading forces under Iceland. It is not impossible for a strong tectonic earthquake swarm to eventually go magmatic, triggering an eruption. 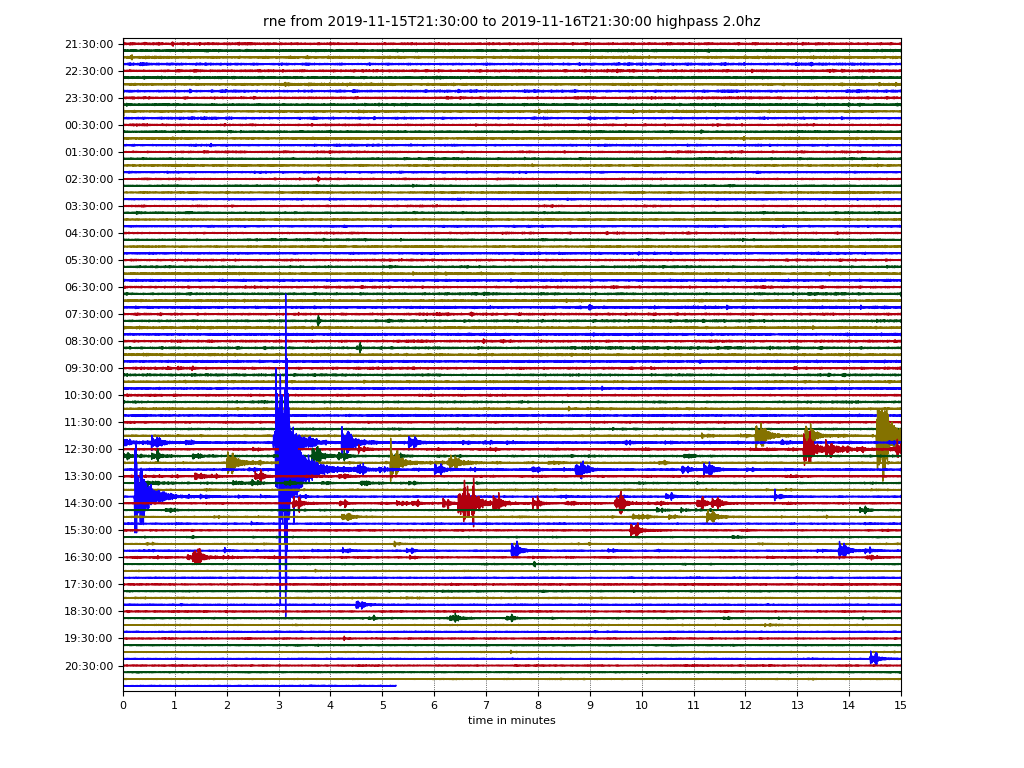 There are currently no signs that an eruption is imminent on Reykjanes Ridge, but that can change at any time. There are many known historical eruptions from Reykjanes Ridge. If an eruption will start, it will look quite similar to the earthquake swarm today, likely even stronger. Despite being underwater, the ocean here is shallow enough, for any eruption sign to be visible on the surface, including lots of ash!
So, if we imagine a hypothetical scenario that an eruption would start here, how would it look like? Since the volcanoes here are underwater (submerged), there is a high probability of ash production. That is due to the combination of hot lava and cold water, turning water to steam and fractionating the molten rock, producing ash. What would that mean for Europe? We made a simulation, using the NOAA Hysplit model, for a hypothetical scenario, if an eruption with ash would occur in the coming week. The simulation shows how far the ash cloud would travel in 2 days (48 hours) if it would reach 9-kilometer altitude. The simulation uses weather forecast data to calculate the high altitude winds and where they would carry the ash cloud. It is very obvious that most of the fine ash particles would be transported directly over Western Europe. That would put air traffic at full stop over large parts of Europe, causing significant economic damage.

We will keep you updated on any important further development, so stay tuned as volcanoes in Iceland go from hot to hotter!

While the ground shakes in Iceland, there are also strong forces at play high above us, over the North pole, where major patterns are shifting, that can define the course of weather and winter in the coming months!

Polar vortex weakening and collapse by the end of the year!