Just a few days after a very warm period across the Balkans and southeast Europe, the cold blast associated with the Arctic outbreak over northern Europe on Friday, is also penetrating deep south across eastern Europe into the Black Sea region today. It will deliver *much* colder temperatures and locally wintery weather again, some fresh snow in parts of southern Balkans and especially Turkey!

The developing pattern over Europe this weekend indicates a strengthening upper-level ridge, building an omega blocking pattern. On its eastern flank, a classic short-wave trough pushes towards south across the eastern Balkans and Black Sea region, becoming a cut-off low over Turkey after Tuesday. 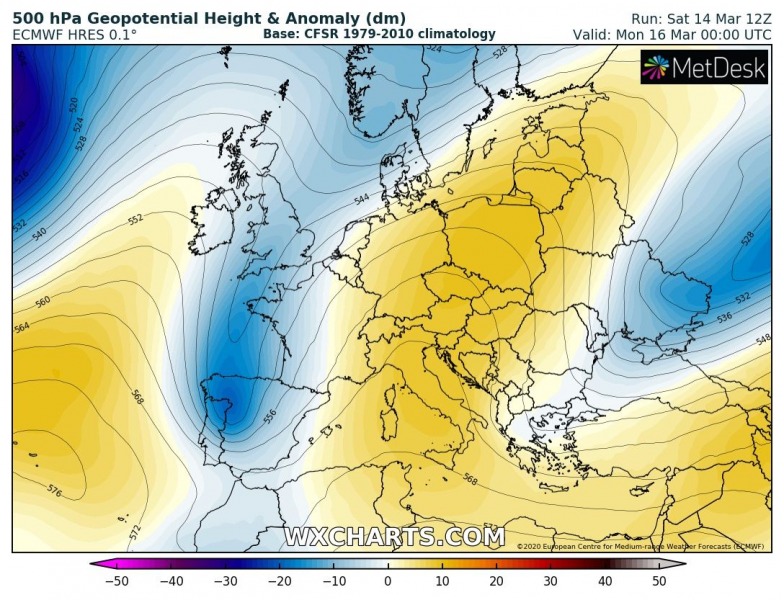 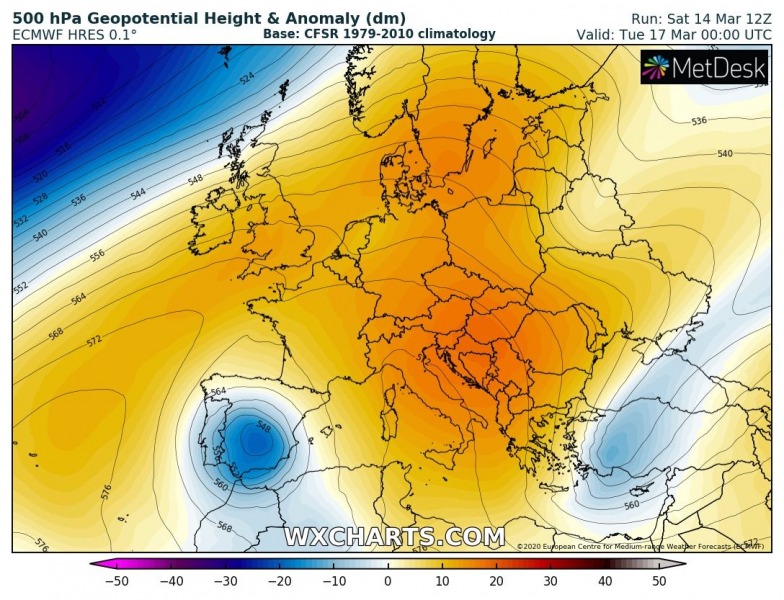 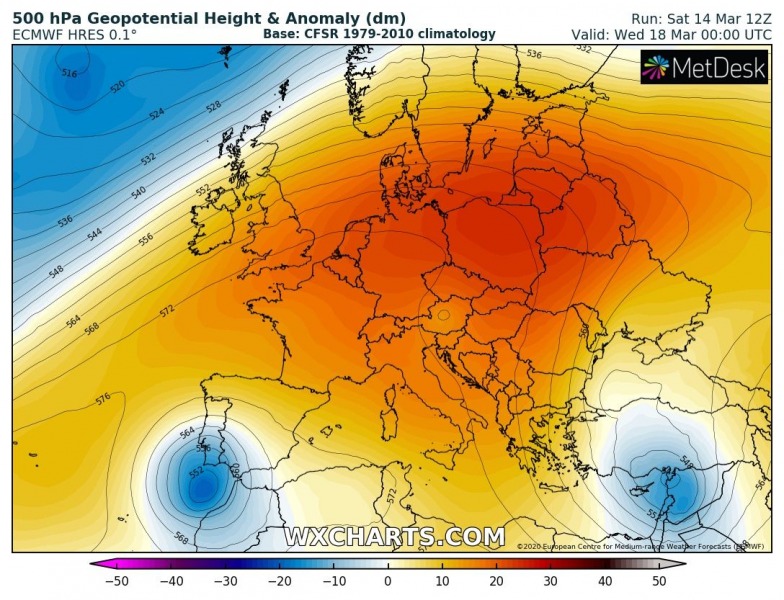 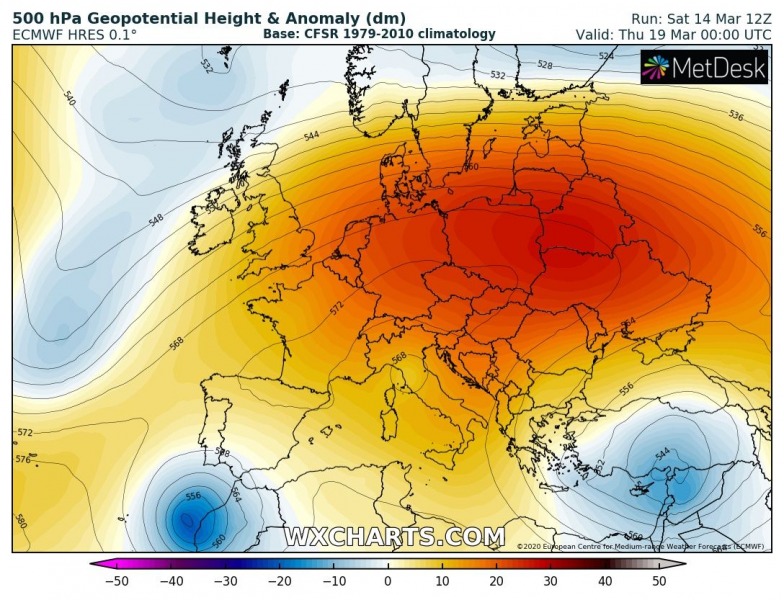 Here is the sequence of the cold outbreak across the southeast Europe and the Balkans – a much colder air mass starts spreading meridionally from eastern Europe into eastern Balkans and the Black Sea region today, worsening tonight into Monday. With the trough transforming into an upper low, the event is expected to strengthen and extend the cold period at least until Wednesday! 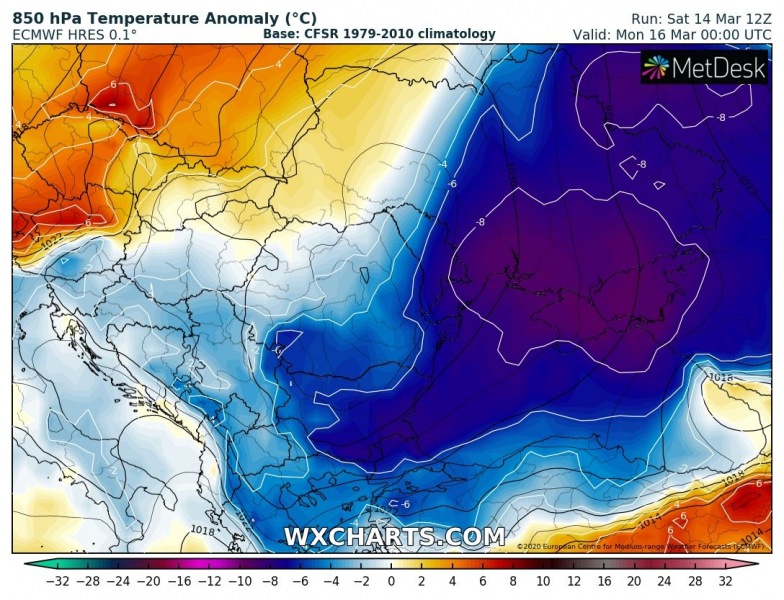 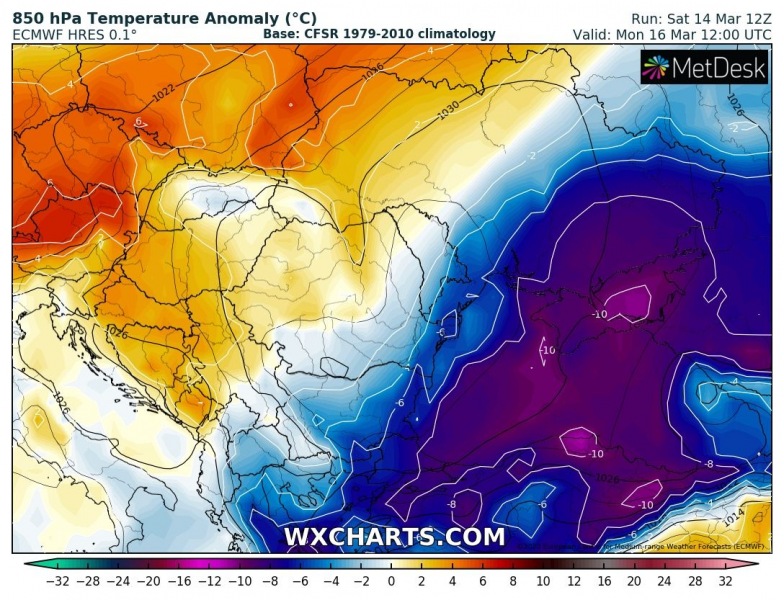 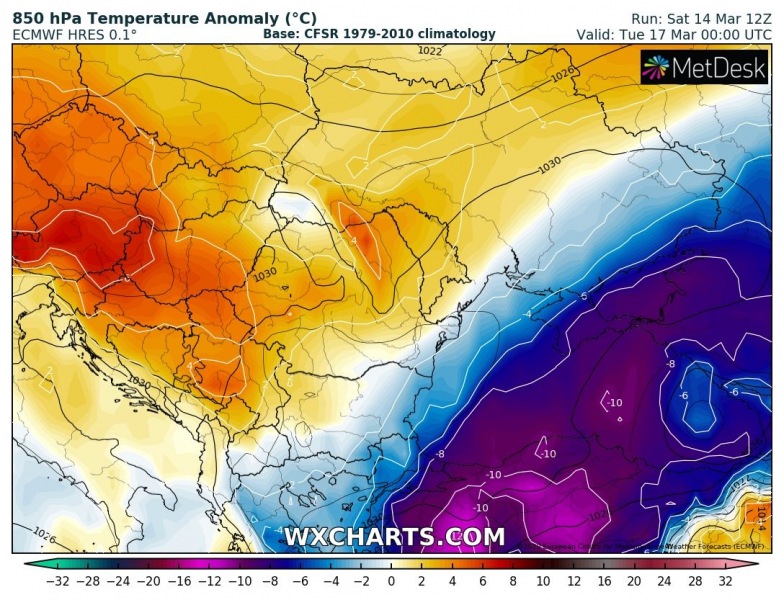 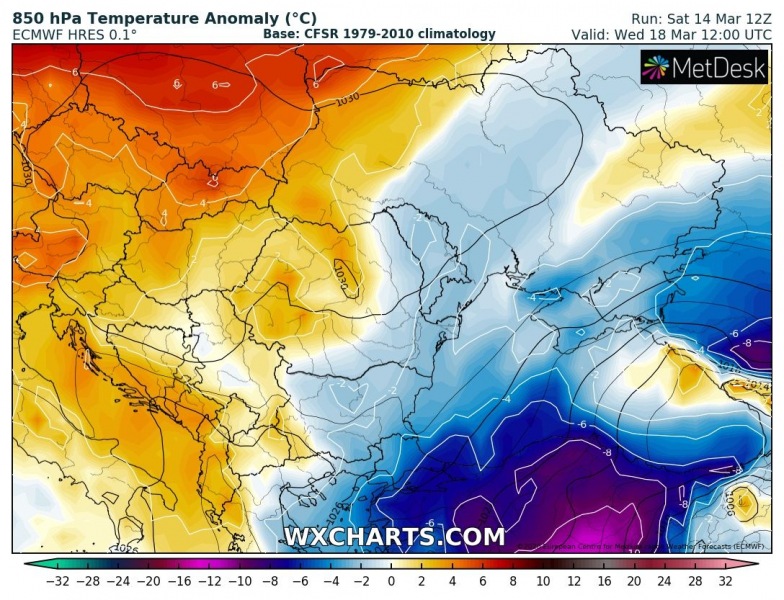 The upper low will remain over Turkey and the eastern Mediterranean through mid this week and result in an excessive amount of precipitation over Turkey. With a very cold air mass advection from the north, a lot of snow is also expected, especially across east-central Turkey. Northern Turkey will likely be facing heavy Black Sea effect snowfall as well. Some snow is also expected further west, even across southern Balkans (higher terrain of Greece, North Macedonia, Bulgaria)! 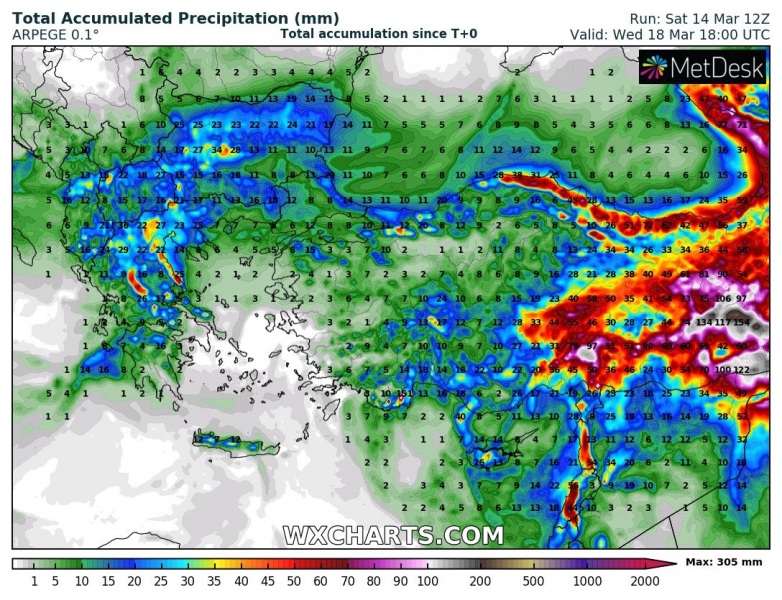 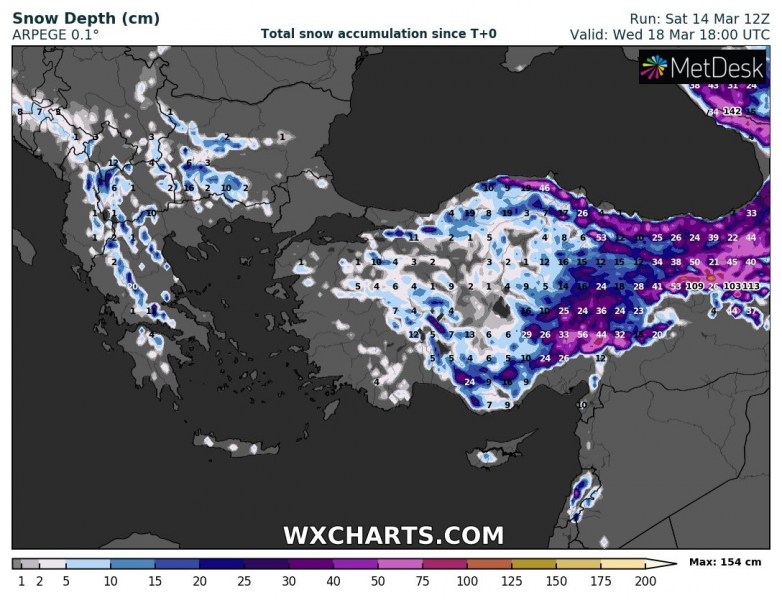 The cold outbreak will bring very cold and frosty morning in many areas again, likely becoming damaging for the blossoming trees. Monday morning will be quite cold across the whole Balkan peninsula and the Black Sea region. While on Tuesday, the coldest airmass slides into Turkey: 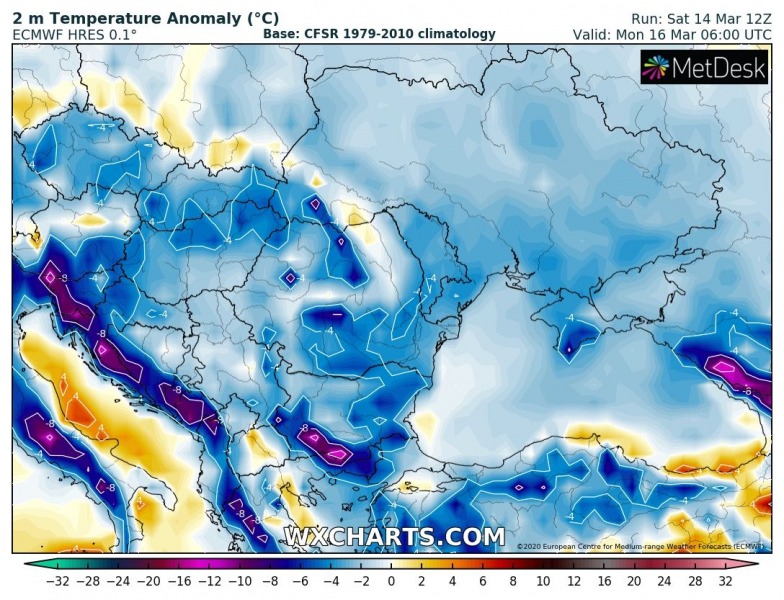 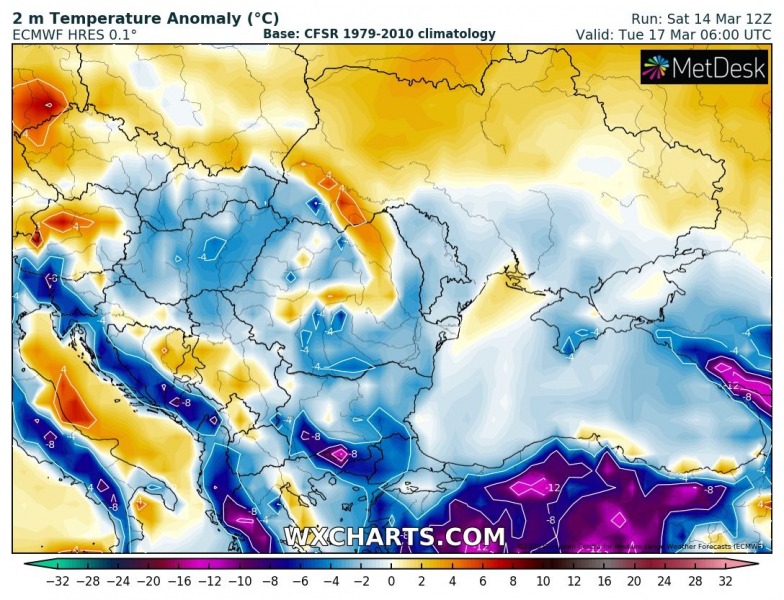 Unfortunately, this event will potentially become damaging for the fruit trees in some areas, as the blossoming boost has started a lot earlier than usual. Fresh snow and very cold mornings should occur! Stay alert.

Another very large cyclone will dominate North Atlantic on Monday, pushing broad severe winds and high waves towards the UK and Faroe Islands

Another very large cyclone will dominate North Atlantic on Monday, pushing broad severe winds and high waves towards the UK and Faroe Islands
← Previous
Iberia goes from summer to winter tonight as very cold weather with heavy rain, snow and morning frosts develop across parts of Spain and Portugal
Next →