An unseasonably strong North Atlantic depression is underway to the west of Ireland today. On its eastern flank, the remnants of an ex-tropical storm Kyle are releasing a very powerful secondary low towards Ireland. Cyclone goes trough a rapid intensification and delivers violent, hurricane-force winds tonight. Peak gusts could locally reach more than 150 km/h. And could be destructive!

A special severe weather outlook has been issued for Ireland tonight

Models are in an increasingly good agreement there is a potential for the event of a destructive wind across parts of southern Ireland tonight. Model guidance is hinting a development of a very robust wind maximum, known as sting jet. If such jet occurs, very violent wind gusts are possible in a narrow swath. The exact position and development of a sting jet remain uncertain. However, let’s take a look at the latest model guidance!

Infrared satellite analysis early this morning reveals a quite impressive structure of this developing extratropical cyclone in the North Atlantic. Entering the western Bay of Biscay, a new secondary low is forming. A broad area of cool maritime air mass is visible in the wake of the main cold front. 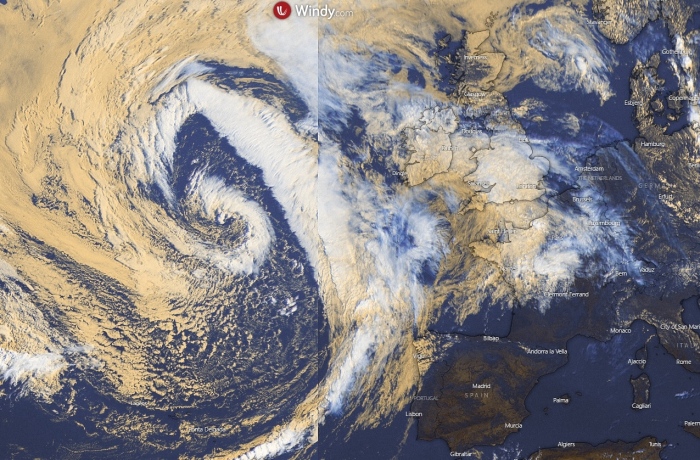 The secondary low, located to the west of the Iberian peninsula at 06 UTC this morning, had a central pressure of around 996 mbar. It has then begun its rapid intensification phase while moving towards the northeast. It is moving within the steering flow of the intense jet stream rounding the main circulation.

These remnants of tropical storm Kyle – now acting as extratropical low, are expected to deepen for around 25-30 mbar until 00 UTC tonight near Ireland. 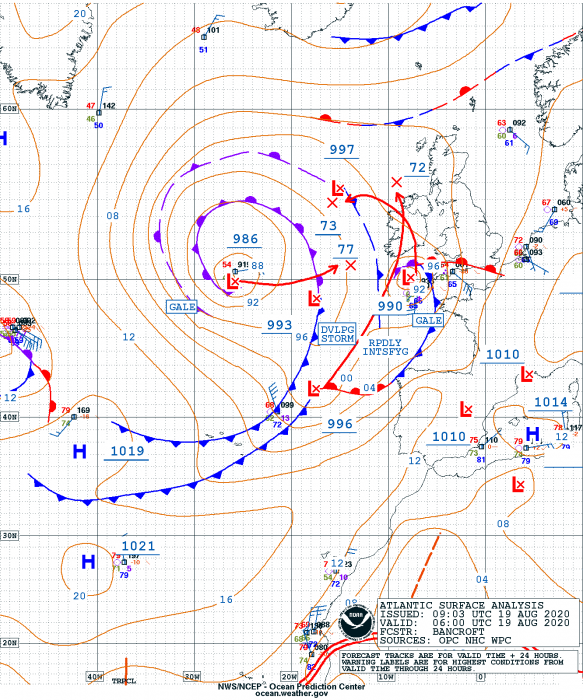 The rapid intensification of the surface low

The secondary low will approach from the Bay of Biscay, coming closer to Ireland early this evening. Below is the 3-hour sequence overnight. At 18 UTC, the system will already be under a very rapid intensification phase with central pressure at or even below 980 mbar. By around midnight, the pressure is likely to peak near 970 mbar.

The wind field associated with the strengthening low will be steadily increasing through the evening hours. It is quite likely the strongest gusts will be well in excess of 120-140 km/h. Potentially even higher than 150 km/h in some places! Also along the coast of southern Ireland. 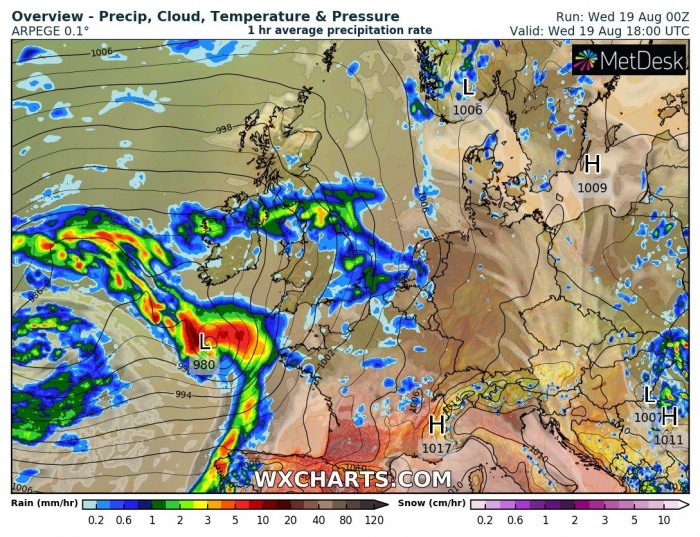 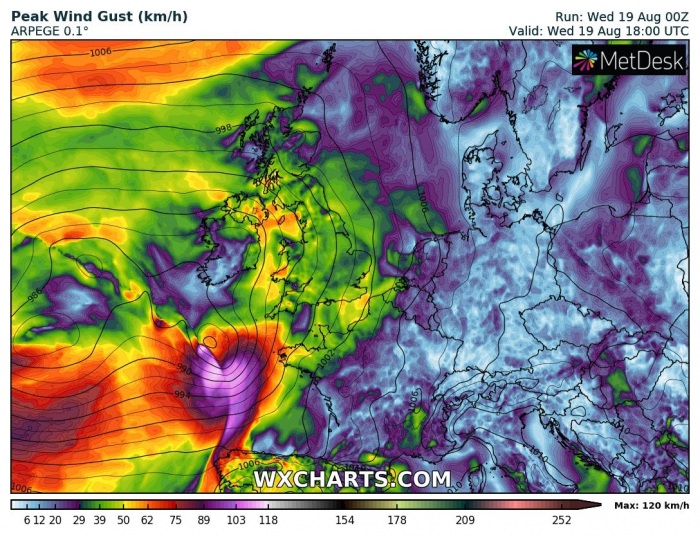 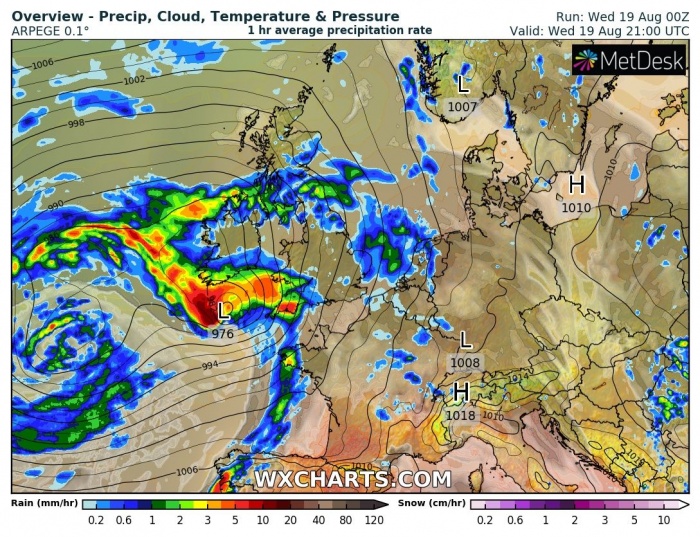 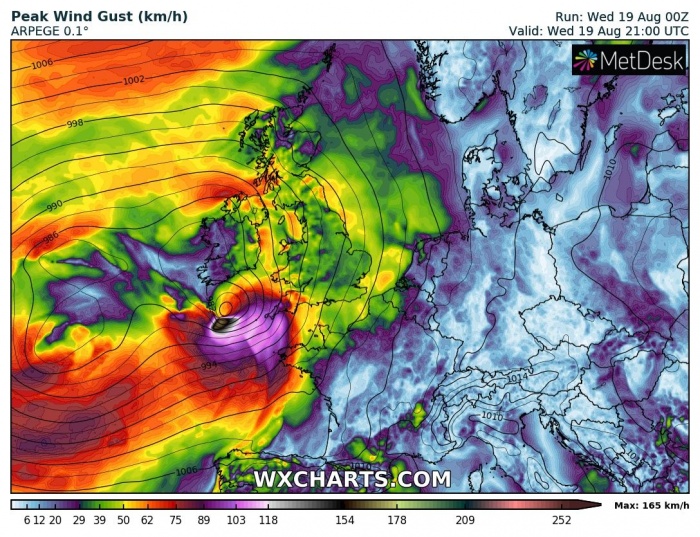 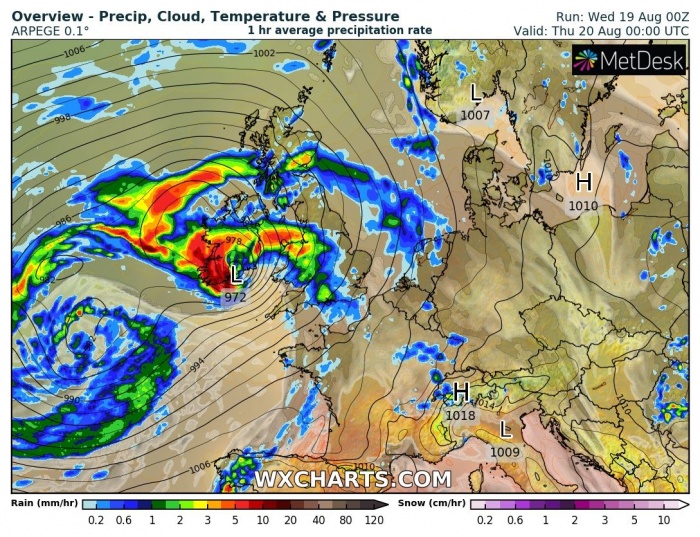 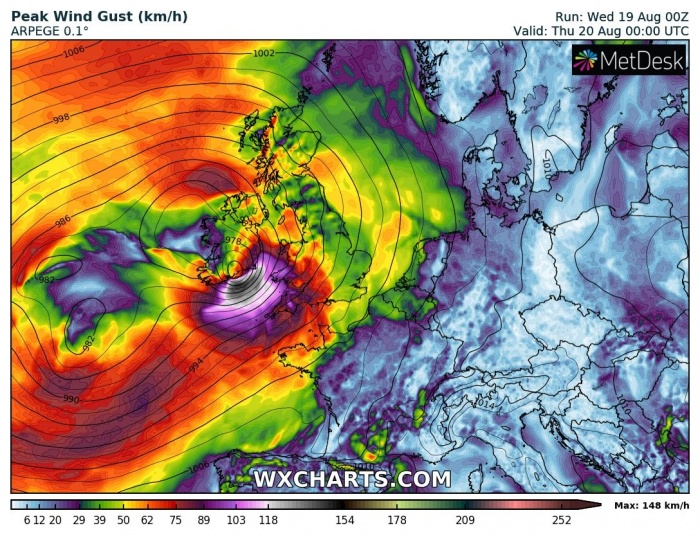 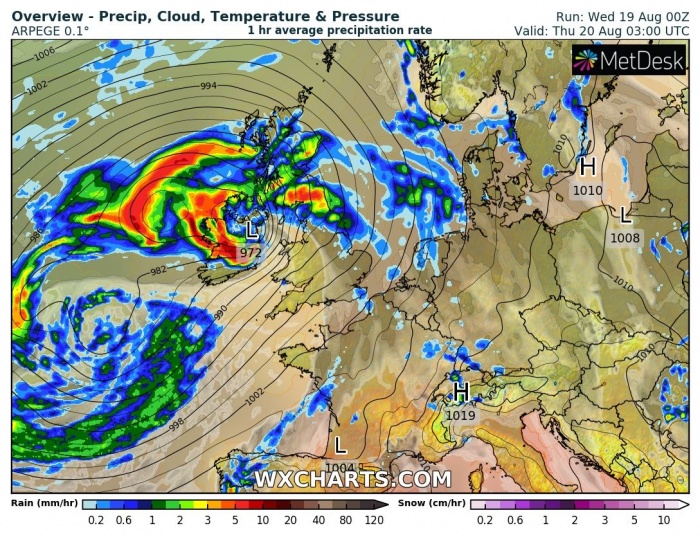 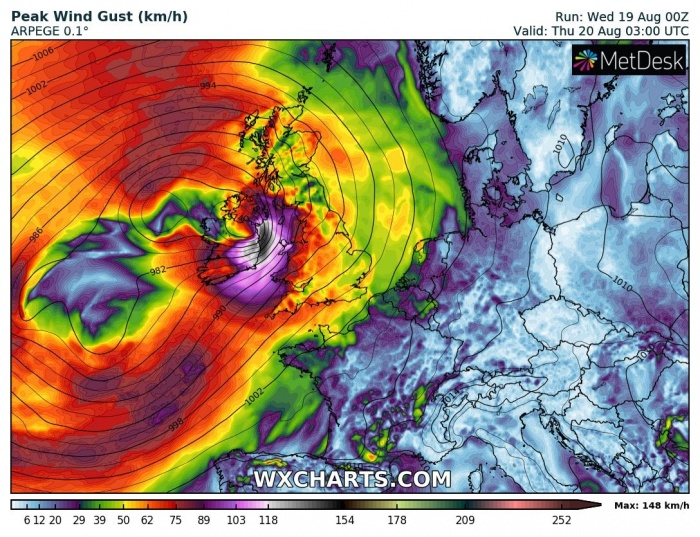 As the sting jet is hard to forecast by the models, some uncertainties still exist regarding the extreme potential. Attached are peak gusts, spreading with remnants of storm Kyle towards Ireland, Wales, and England tonight based on the ECMWF, ARPEGE, and AROME models. All three models are in agreement gusts could reach 150-180 km/h. Those would undoubtedly be destructive and severe wind damage and coastal flooding is increasingly likely! 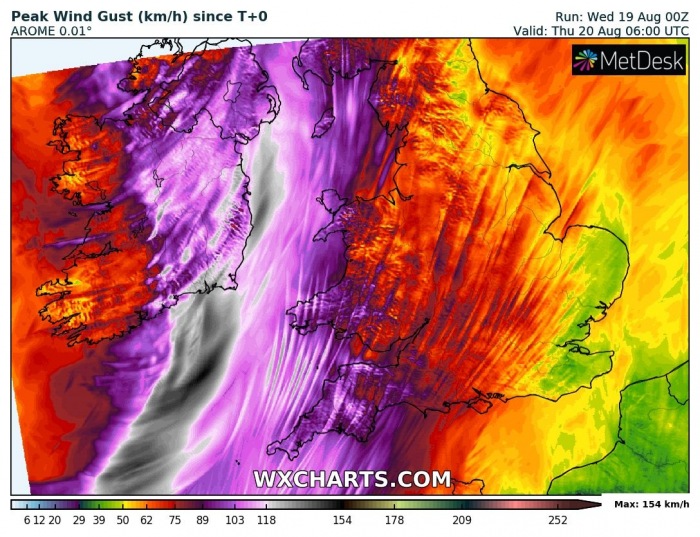 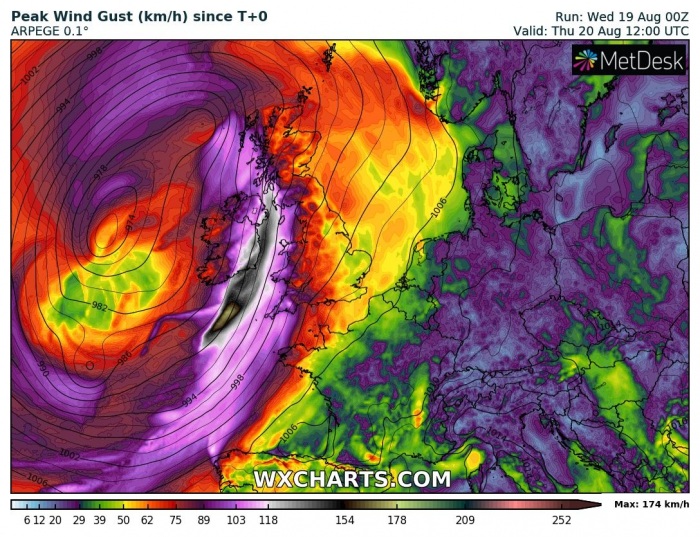 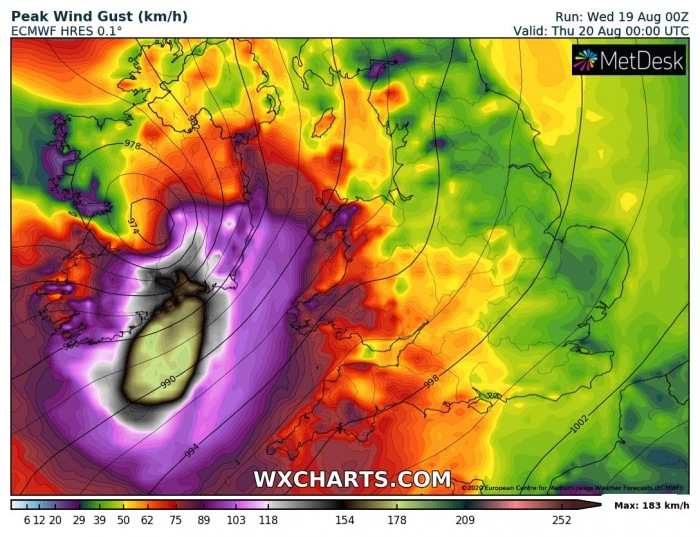 Severe winds are also possible across the extreme southwest England and towards Wales, depending on the exact track of the surface low. If the low goes a bit more east, higher gusts are also likely over these areas. The most robust environment, however, remains closer to the surface cyclone’s center.

Ex-storm Kyle remnants core will be very well organized and begin affecting Ireland and southwestern England with heavy rainfall early this evening. With time, precipitation will increase and heavy rain/wind squalls are expected. Quite a lot of rain with an increasing flooding potential develops on the rear side of the cyclone, precisely over western and southwestern Ireland. 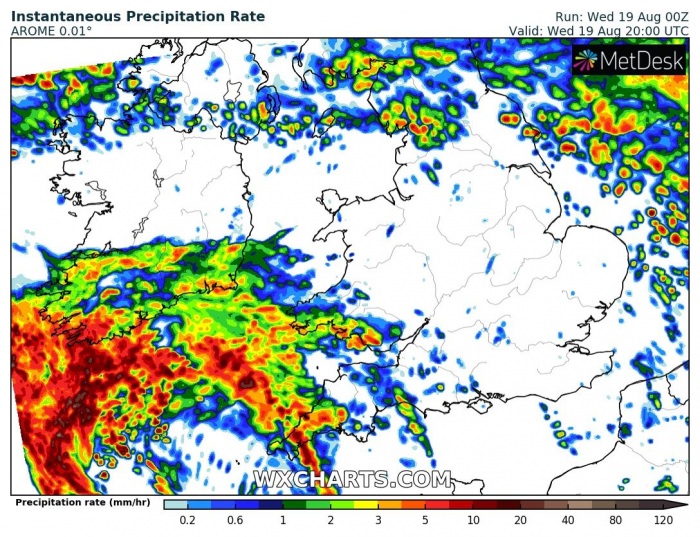 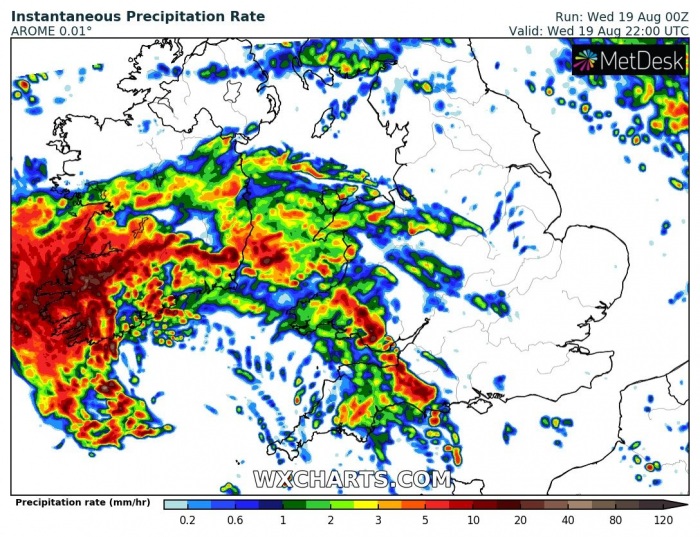 Towards midnight, the center of the low will enter southeastern Ireland. Due to the effect of a descending air associated with the sting jet, powerful winds should temporary limit precipitation due to evaporative cooling. Additional precipitation in the likely behind the main wind blast during the second half of the night.

Although the total rainfall will not be particularly extreme, 60-80 mm of rainfall seems reasonable across southern and west-southwest Ireland in places. This should enhance local flooding potential. 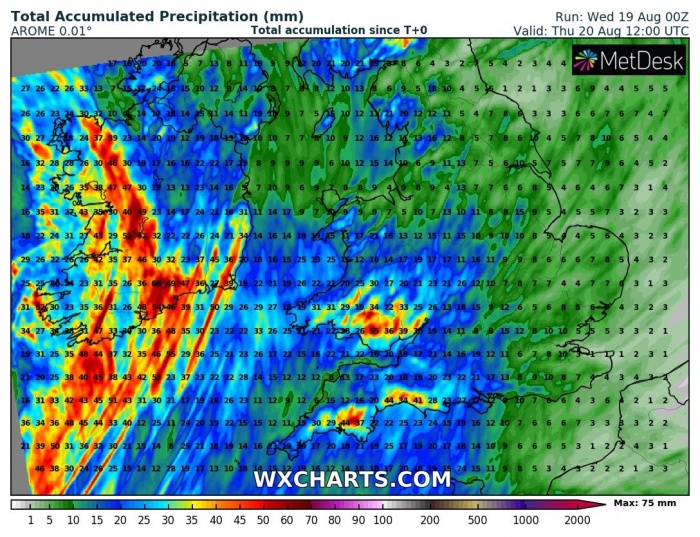 Note: A sting jet phenomenon is a narrow zone of strong winds, originating from within the mid-tropospheric cloud head of explosive cyclogenesis. Winds are enhanced further as the jet descends, drying out and evaporating a clear path through the precipitation. The evaporative cooling leads to the air within the jet becoming much denser, causing the acceleration of the downward flow towards the tip of the cloud head when it wraps around the cyclone center. 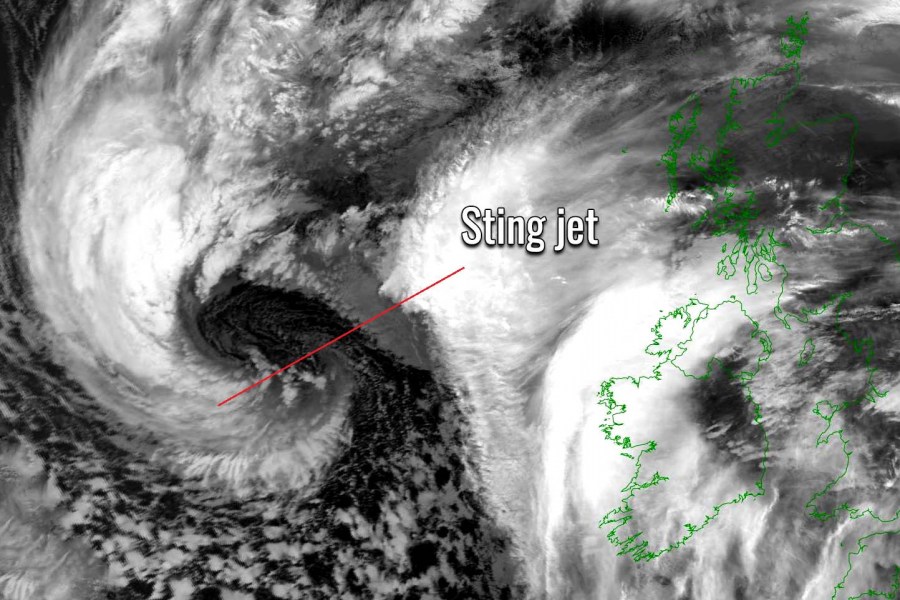 If models verify, the extreme wind event associated with the ex-tropical storm Kyle would bring lots of trees down, along with potential structural damage into Ireland! Stay alert and stay safe!

See other similar events with sting jet in the past: