A dangerous and intense surface low is being pushed towards Ireland and the UK on Wednesday. The system is associated with the unseasonably strong extratropical cyclone. Damaging winds and high swells are increasingly likely for Ireland, Wales, and England! Slow-moving storms with flooding threats across Balkans and eastern Europe. 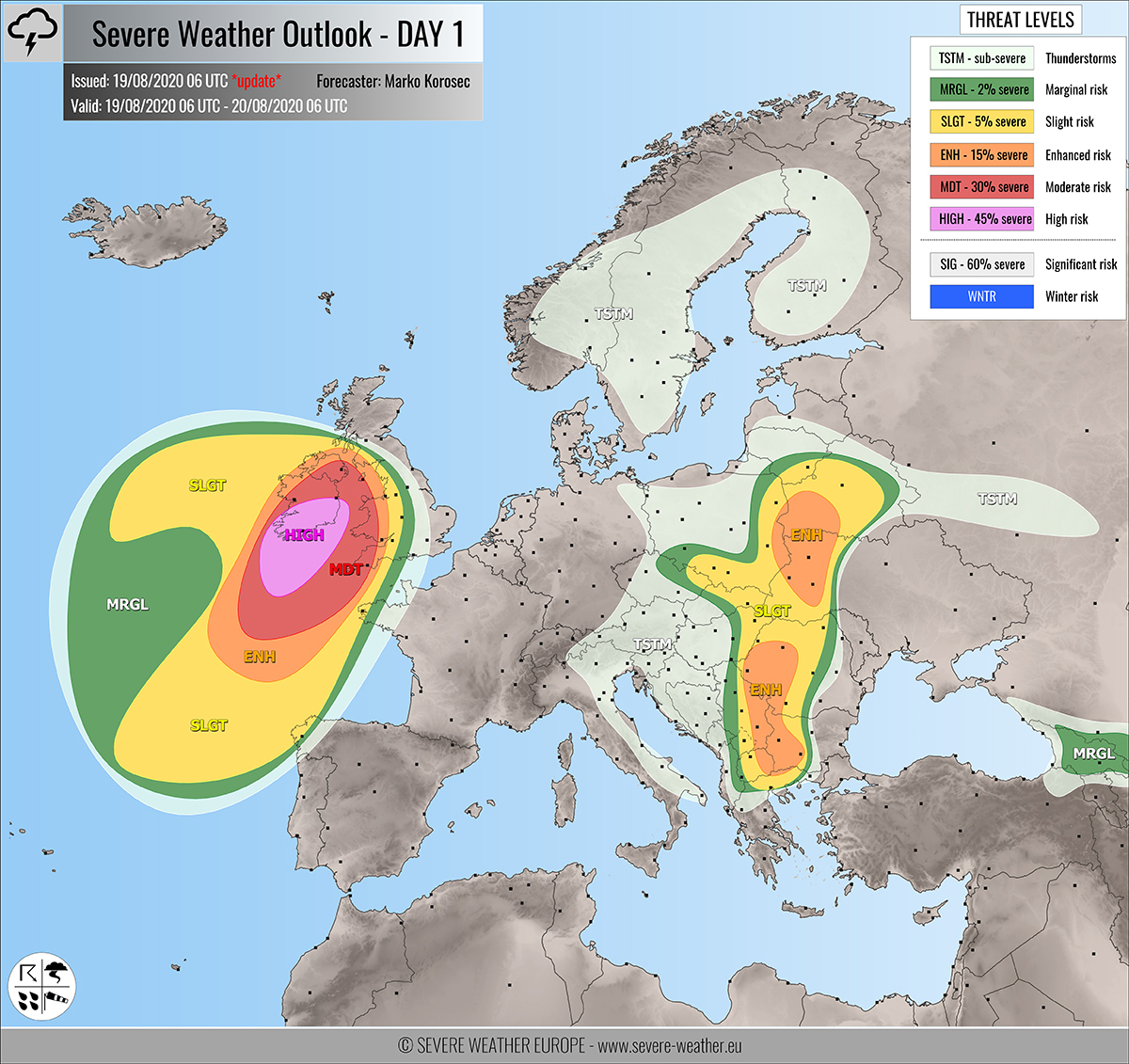 Southern Ireland has been upgraded into a HIGH risk based on the much higher probabilities for extremely severe winds to occur this evening and tonight. Destructive winds and major waves along the coast are expected! 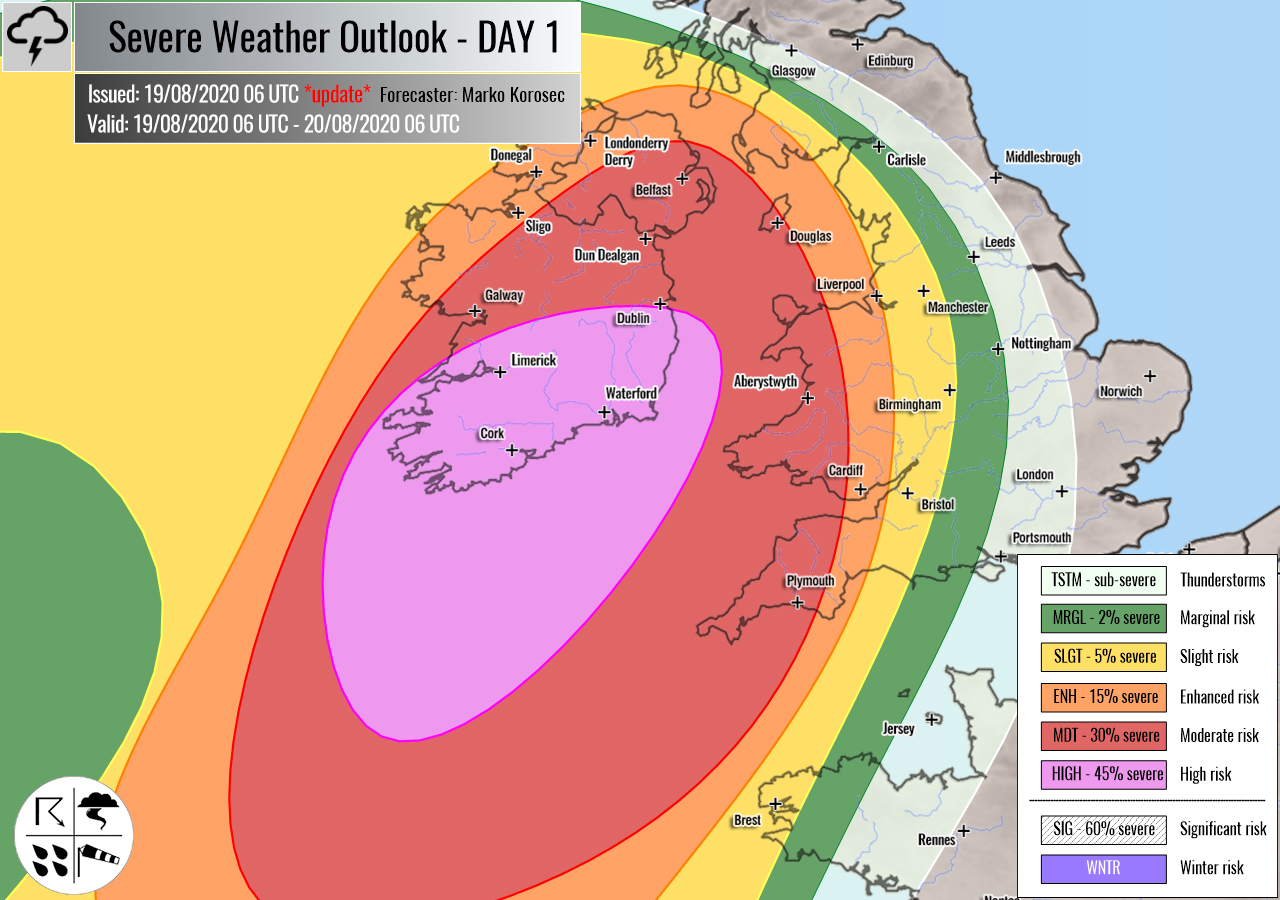 HIGH risk has been issued for southern Ireland with a threat of extremely severe and destructive winds, associated with the intense cyclone moving north from the Bay of Biscay. High-resolution models are forecasting a high potential for the development of a sting jet wind maximum. Hurricane-force winds will spread into the coast of southern Ireland.

With this upgrade, MDT risk has also been extended further north and east, covering north-central Ireland, the eastern part of Northern Ireland, western Wales and southwestern England. Potential is higher for more intense winds there as well.

If a sting jet verifies, a very localized jet of extremely severe wind gusts could occur. Destructive winds in excess of 150-160 km/h are possible within the HIGH risk area.

Together with dangerous winds, major waves are expected to blast into the southern Irish coast. Potentially also spreading towards southwestern England and western Wales towards Thursday morning.

The extreme wind event associated with the ex-tropical storm Kyle would potentially bring lots of trees down, along with structural damage into parts of Ireland!

Read the mesoscale discussion on the event 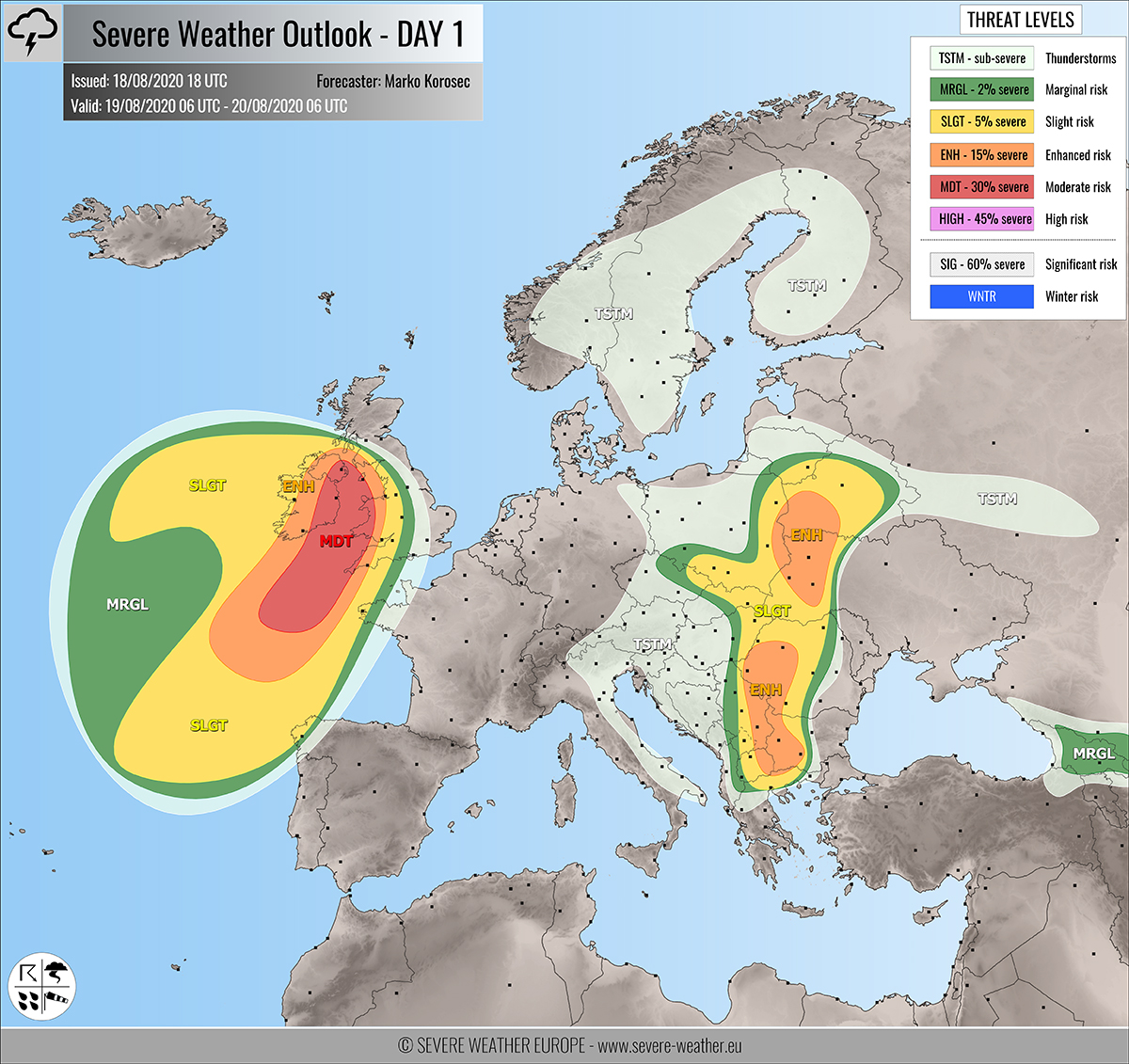 A very deep and intense trough/low is nearing western Europe with a broad surface circulation. Within this surface depression, a very powerful secondary low translates from the Azores and is being pushed towards Ireland. A frontal boundary associated with the main depression extends from the North Sea across western France into western Iberia. Another long-wave trough is weakening while moving east across the Balkan peninsula. A shallow surface low is located over eastern Europe. 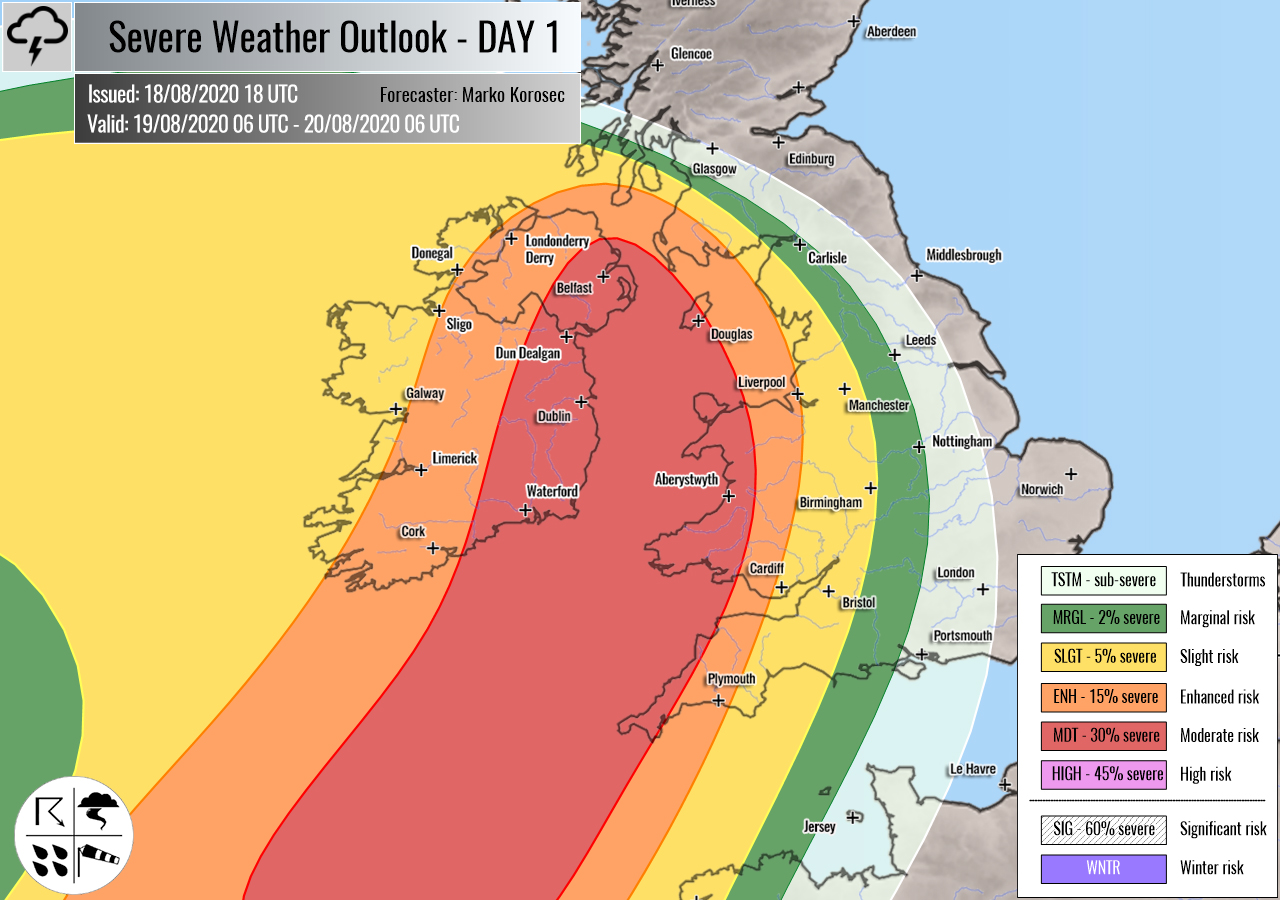 MDT/ENH risks have been issued for most of Ireland, Northern Ireland, Wales, and western-southwestern England with a threat for dangerous severe storms, capable of producing severe damaging winds, torrential rainfall, tornadoes, and marginal hail.

Beneath a very deep the North Atlantic trough, a powerful secondary surface low associated with the broad surface circulation will rapidly move towards Ireland and UK. A quite strong 50-60 knots deep-layer shear is present given the strong jet rounding the main depression. However, only marginal instability will build up.

It appears likely the secondary low will significantly enhance the threat for dangerous winds along its path from the Bay of Biscay into Ireland, southwestern England, and Wales. ECMWF and high-resolution models are simulating a potential sting-jet to occur. That would support hurricane-force wind gusts in excess of 150 km/h across the MDT risk area.

Together with severe winds, torrential rainfall is likely to occur as well. Especially across the south-central parts of MDT risk. As storm cells will be rather fast, mainly intense rain/wind squalls are expected.

Another concern is also strongly enhanced low-level shear and helicity, which could contribute to tornado threat with any better-organized supercell storm within the eastern half of MDT/ENH risk areas. This threat is particularly high across the southwestern England and Wales.

Areas within the MDT risk are being closely monitored for a possible upgrade into a HIGH risk on Wednesday morning if new model data confirm a more concentrated extremely dangerous wind threat – stay tuned!

SLGT risk has been issued for areas surrounding the ENH risk across the rest of Ireland into the Bay of Biscay and around the main surface low with more isolated severe storms possible. Mainly severe winds and some marginal hail can occur. SLGT has also been extended across extreme northwestern France and the Galicia region (Spain). Severe winds are possible. 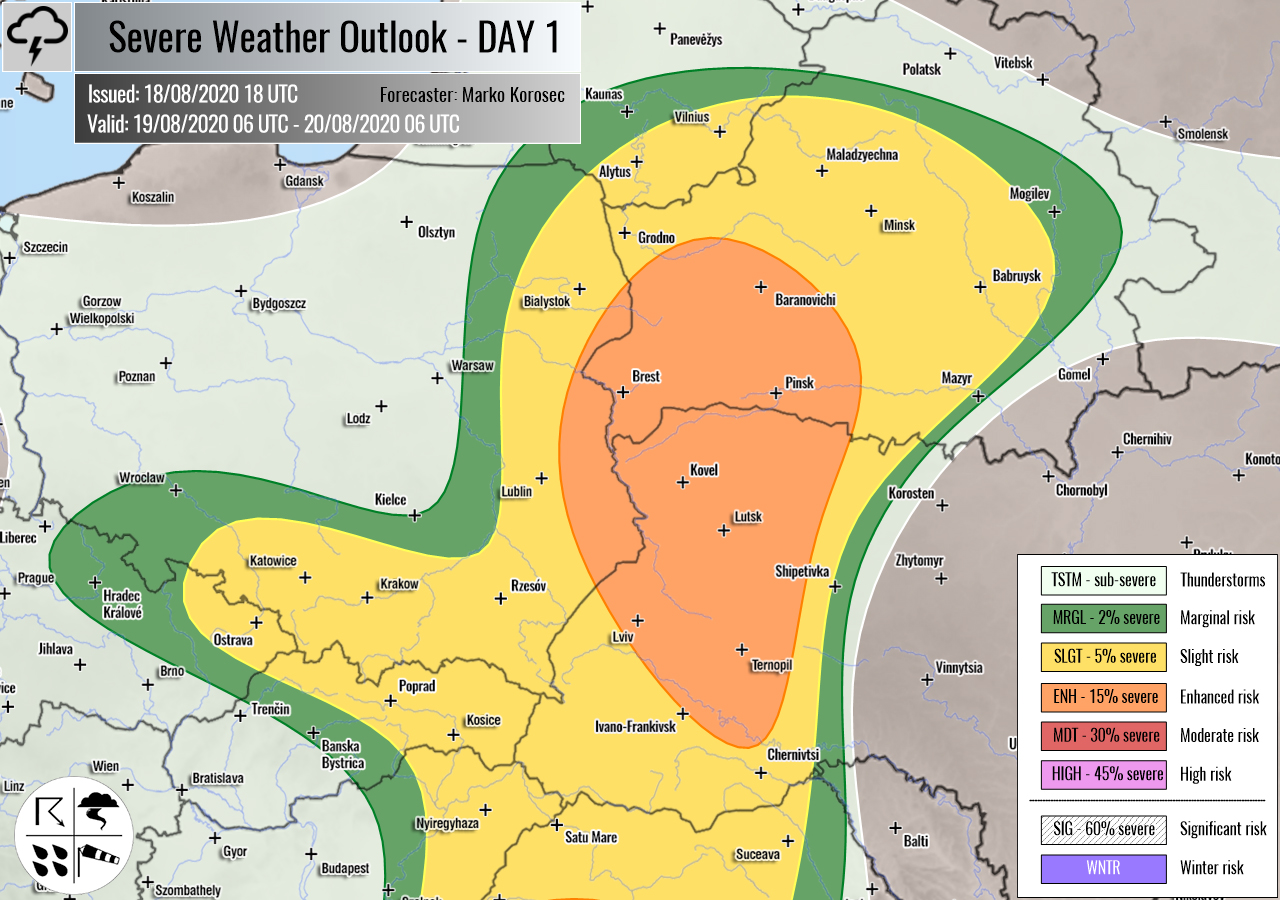 A shallow low under favorable upper-level forcing serves a focus for rather widespread storm activity. Moderate CAPE with low shear will be conductive for lots of rain and flash floods locally. 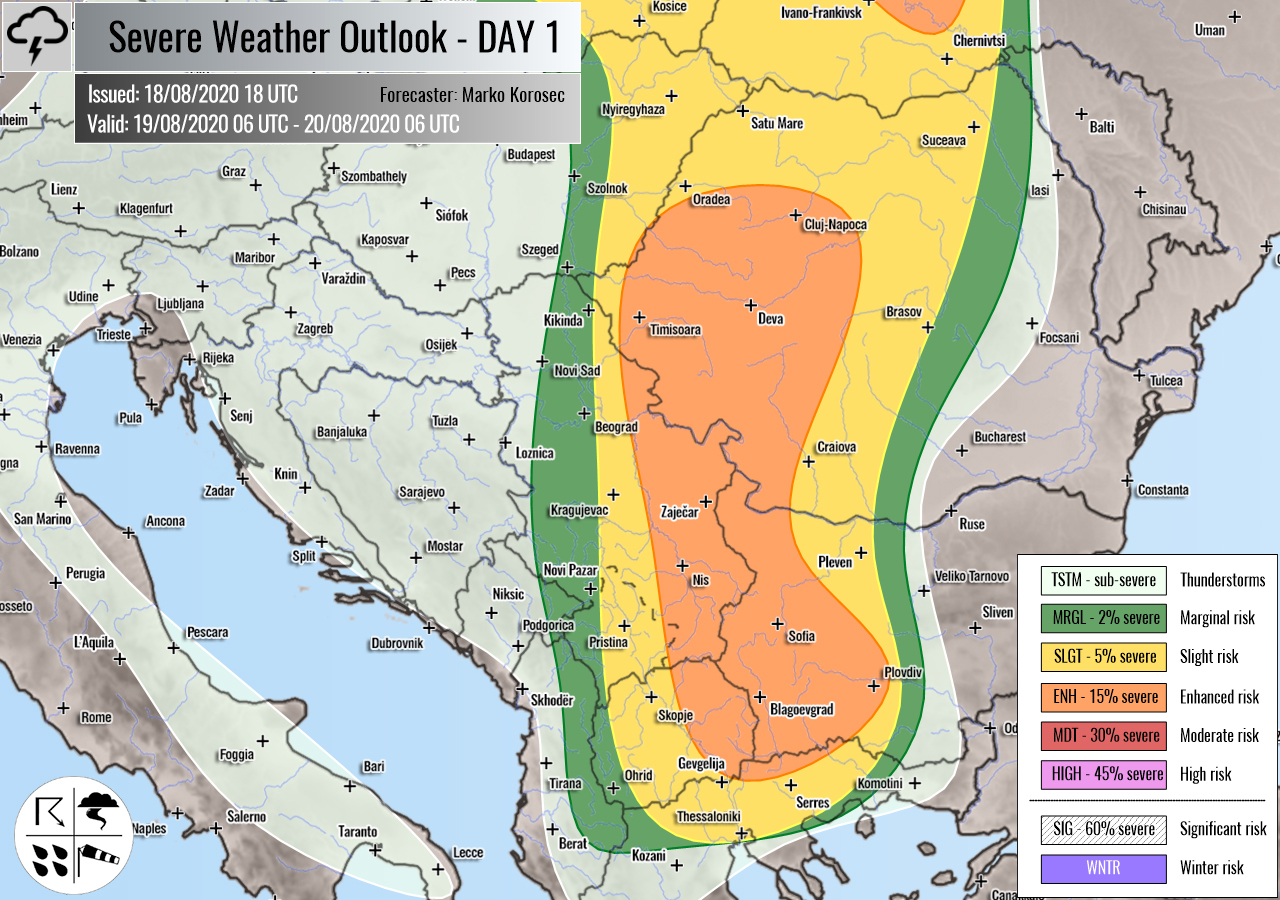 ENH/SLGT risks have been issued for south-central Balkans with a threat for severe storms, capable of producing severe winds, large hail, and torrential rainfall with flash floods.

A large trough will contribute to moderate instability and low to moderate shear, especially across the southern parts of the peninsula. Scattered organized storms are expected from the early afternoon onwards, possibly also a few supercells. Those will be capable of producing large hail, severe winds and especially torrential rainfall and locally flash floods due to their slow-moving nature.

MRGL risk has been issued for Georgia with a threat for a few isolated severe storms, capable of producing severe winds and marginal hail.

TSTM risk areas have been placed across parts of Scandinavia, central Europe, and Italy with a threat for daytime driven storms. Limited shear is present, so the storms should remain sub-severe.