As we already mentioned yesterday, a train of cyclones is developing over the North Atlantic, delivering some of them into western Europe. One cyclone crossed the region today, another one is coming tomorrow, Friday, Jan 31st. Although it will be weakening along its path, its wind field is large, and so are the waves gradually spreading towards western Ireland, Northern Ireland and western Scotland overnight to Saturday.

The first cyclone we forecasted last night was traveling to the immediate north of Scotland today, delivering severe winds into parts of Scotland. Scottish lowlands experienced up to 100 km/h gusts, similar across Northern Ireland. Highlands peaked into 150-180 km/h range! The afternoon analysis indicated this new cyclone had a central pressure of 964 mbar with developed hurricane-force winds in its wake. It is moving northeast and the central pressure is expected to rise into around 970 mbar, but the wind field remains strong. We can also see today’s cyclone, located to the north of Scotland. Notice also a new cyclone just south of Nova Scotia, it will take a similar path as the first two systems, traveling towards western Europe over the weekend. 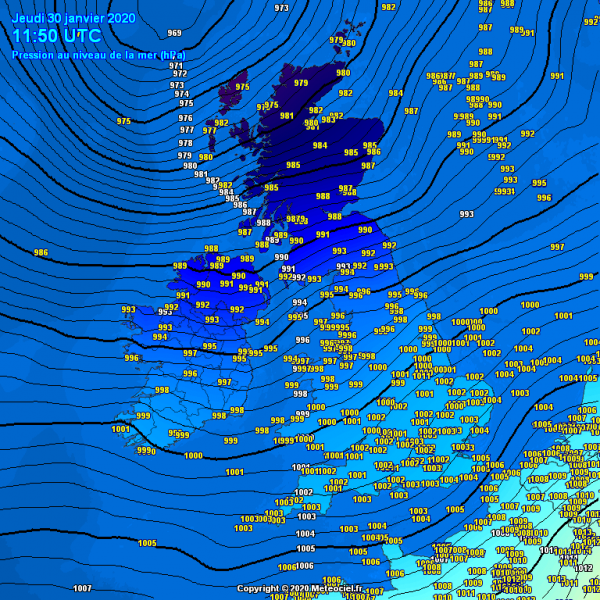 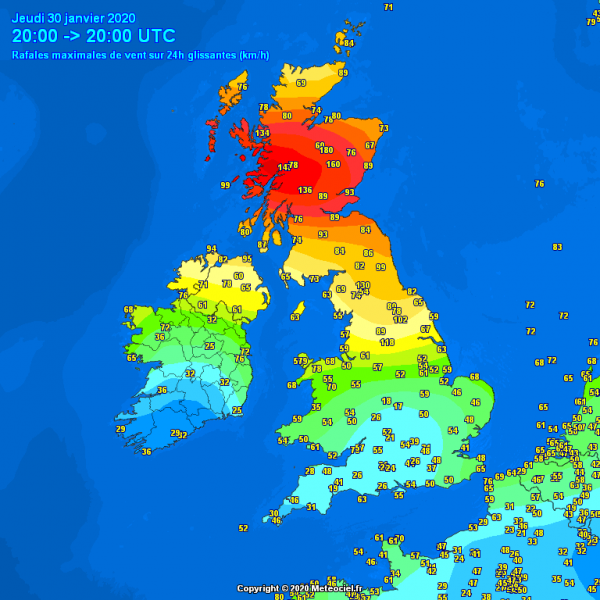 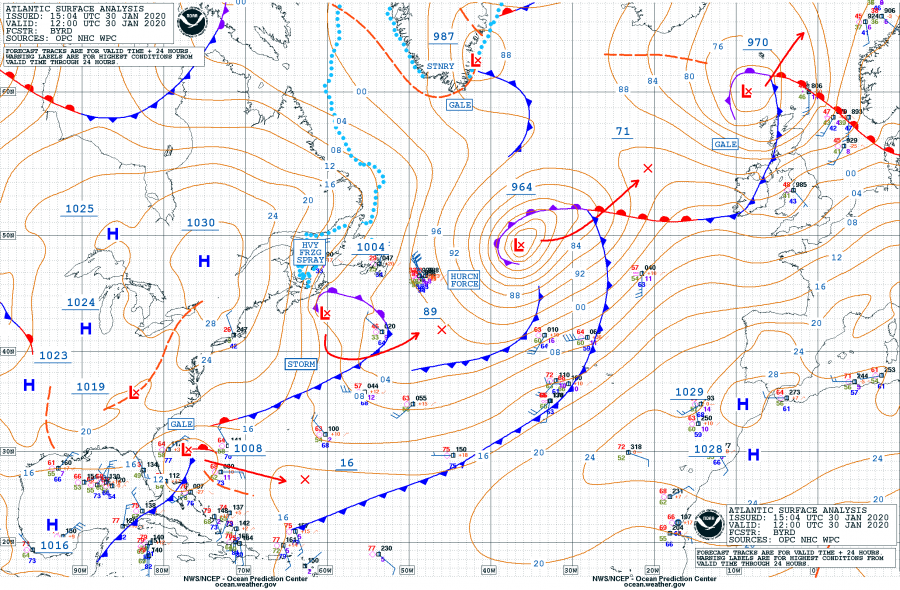 Satellite imagery is once again pretty impressive, with yet another textbook structure of the core with a pronounced dry intrusion wrapping around the center of the low. Attached are several images in various channels, close-up views and wider to see cyclone’s size compared to the European continent. 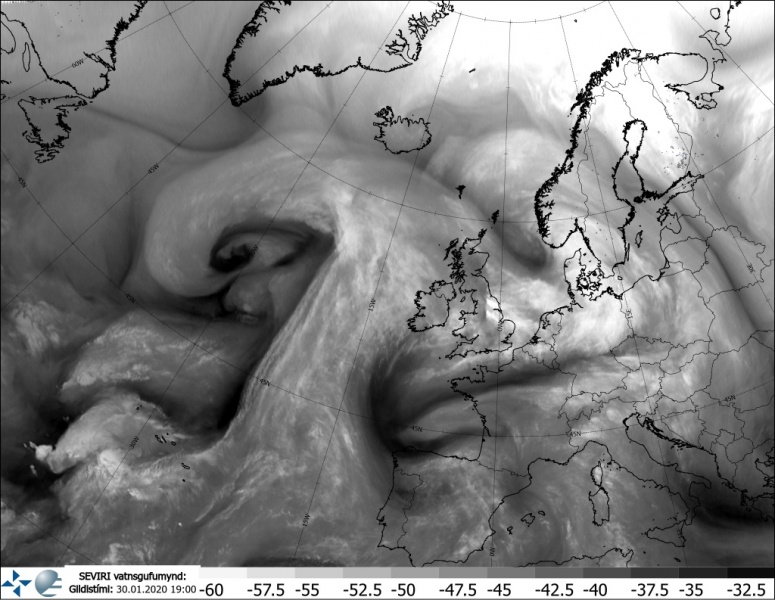 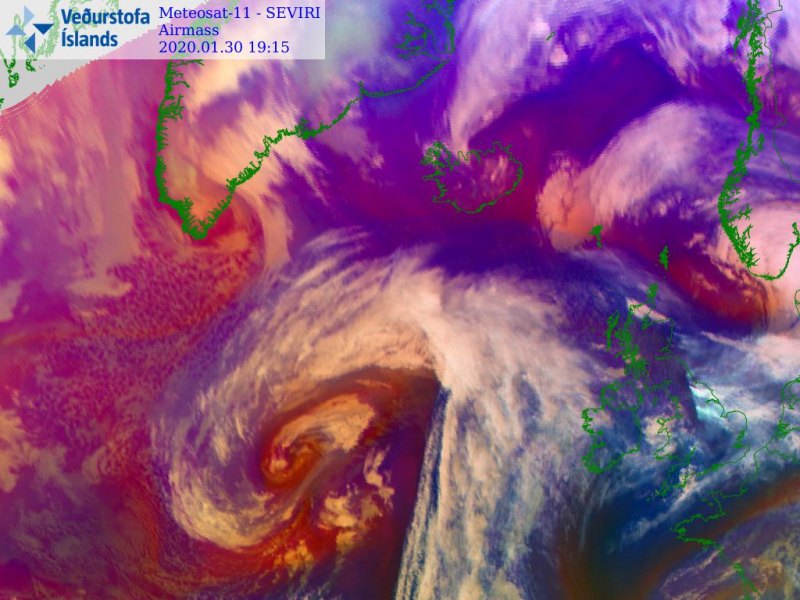 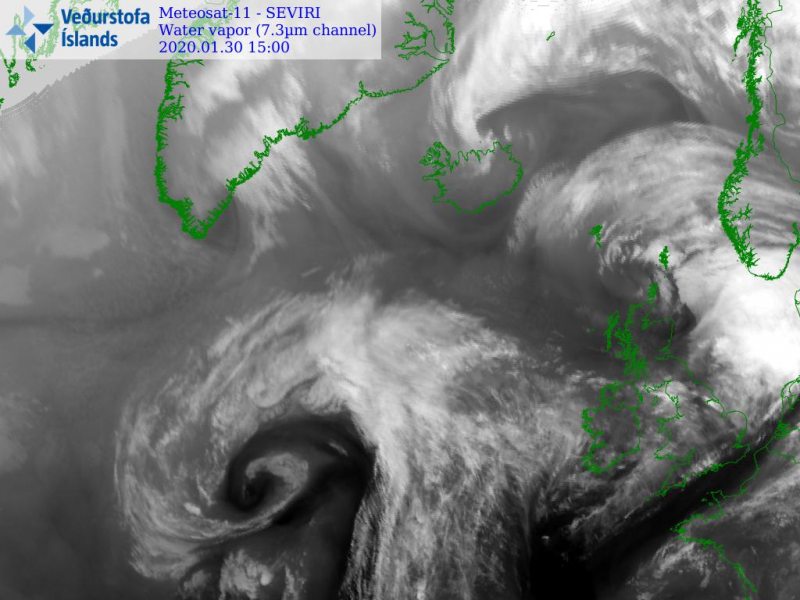 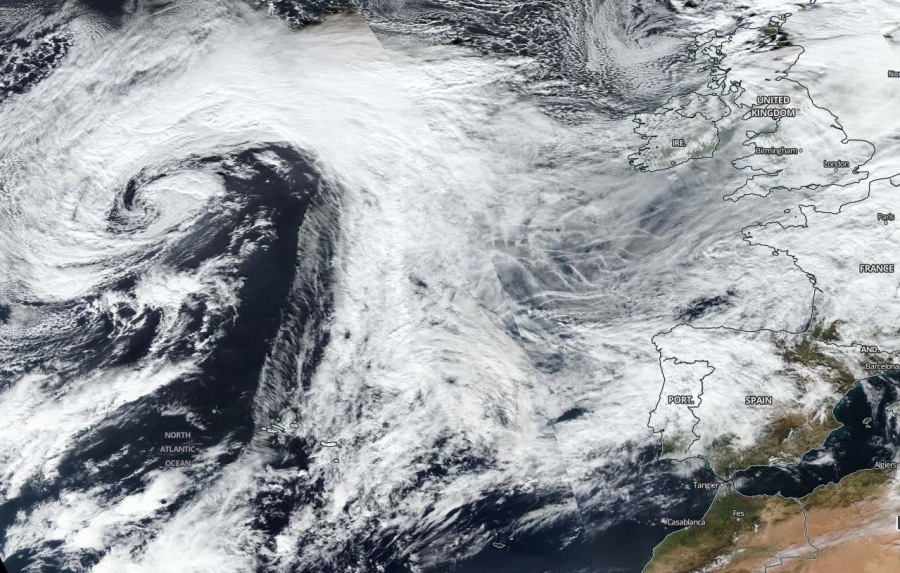 We can see the large trough with low geopotential heights dominates the North Atlantic, with several deep waves traveling with the zonal flow. Ridging is persisting across south-central Europe, resulting in west-southwesterly flow into our continent in between – in other words, mild weather and temperatures. GEFS model tracks perfectly reveal the train of cyclones; we can see the first one ejecting the North and going into the Norwegian Sea, this one we are currently discussing is nearing the UK and Ireland while a new one is already coming from North America. 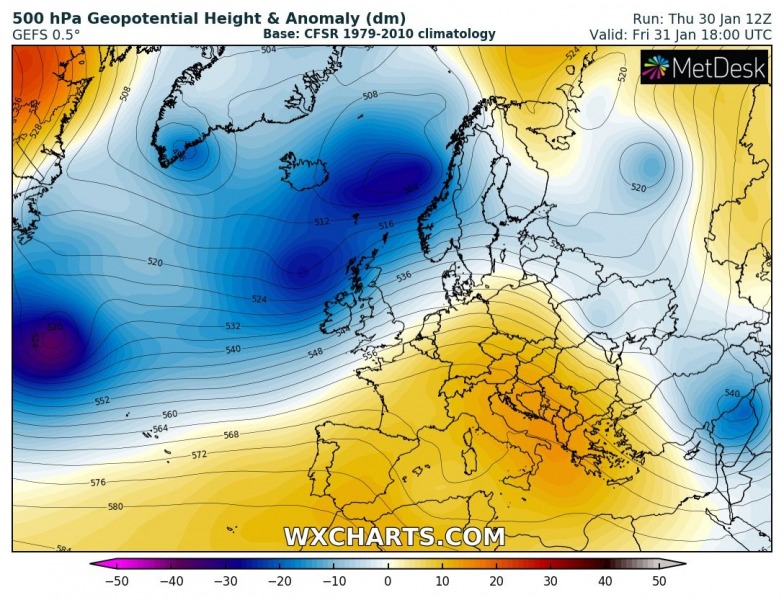 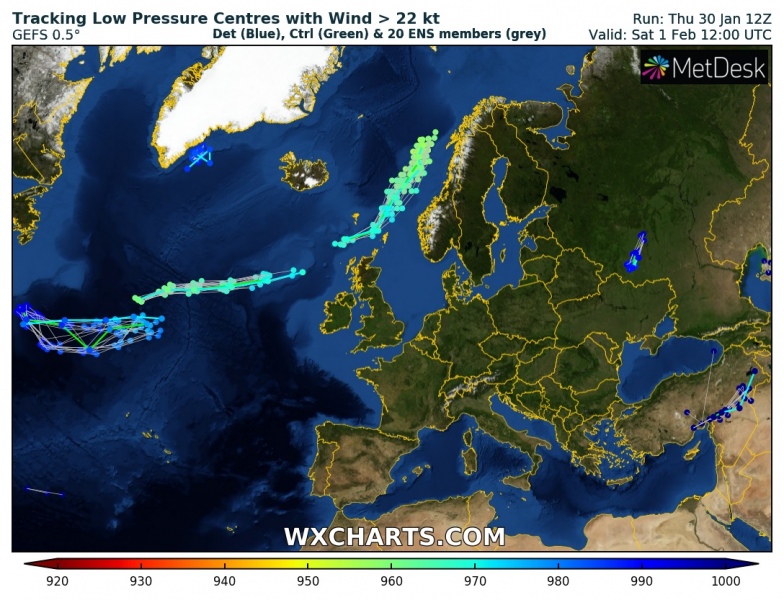 Cyclone will be entering from the southwest, located west of Ireland by midday Friday. It will be gradually filling while drifting towards Scotland but its wind field will be wide and quite strong. Orographic rainfall will be ongoing across the Scottish Highlands. 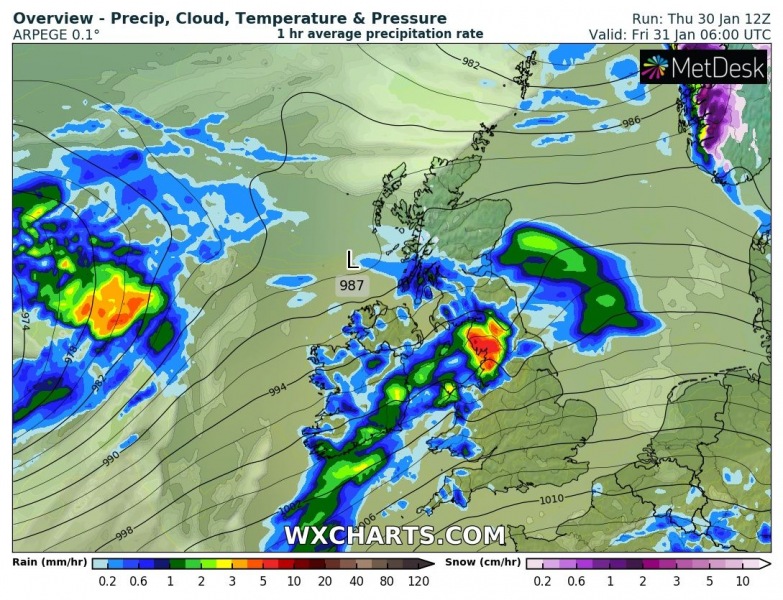 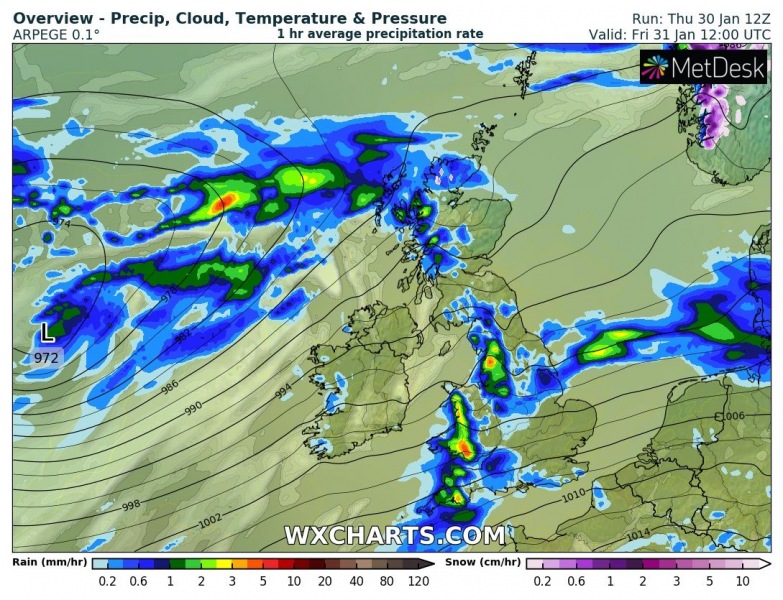 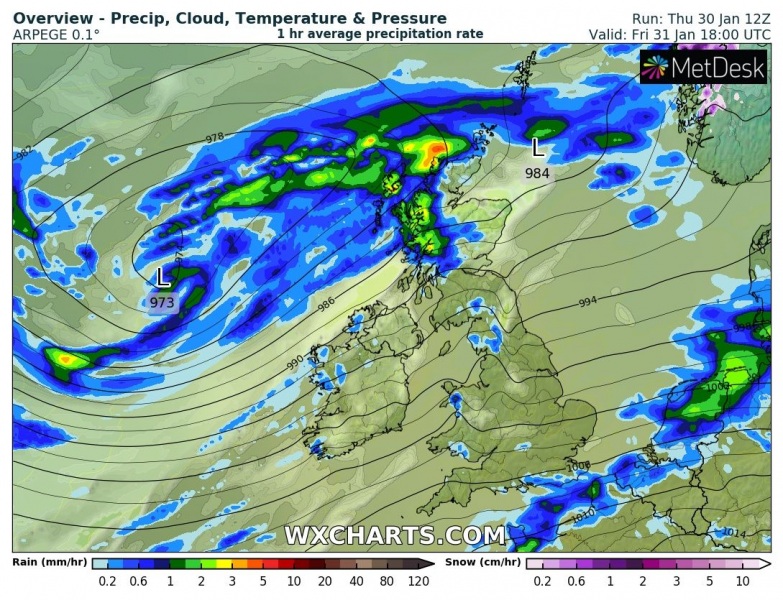 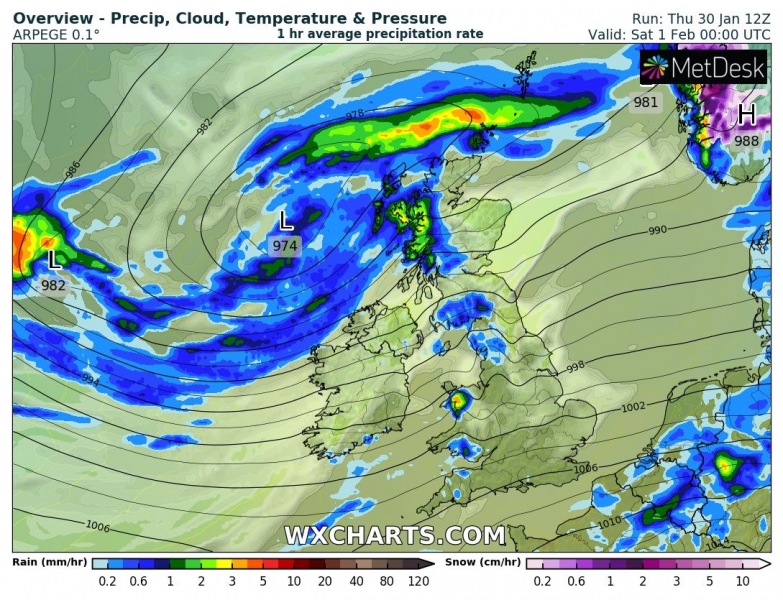 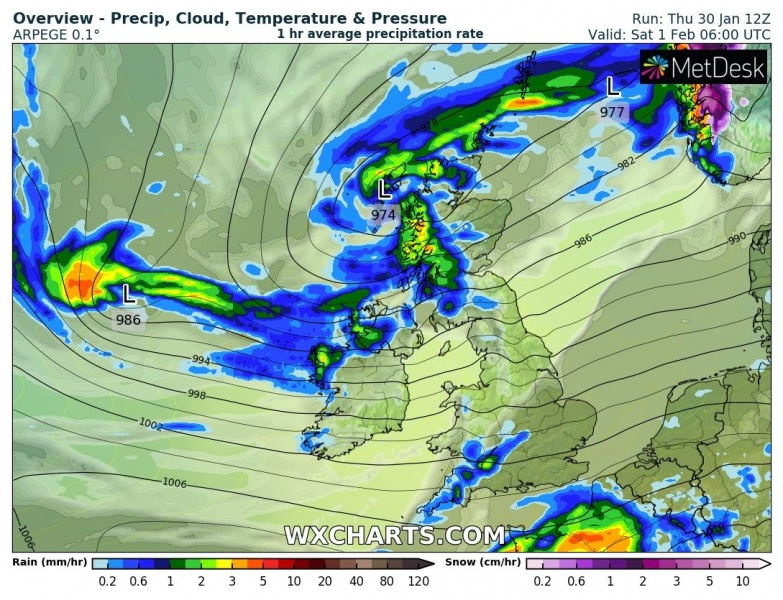 Peak gusts swaths per ARPEGE and ICON-EU models – it will not be particularly dangerous, but it could still bring 90-120 km/h in some areas, potentially higher in Highlands. 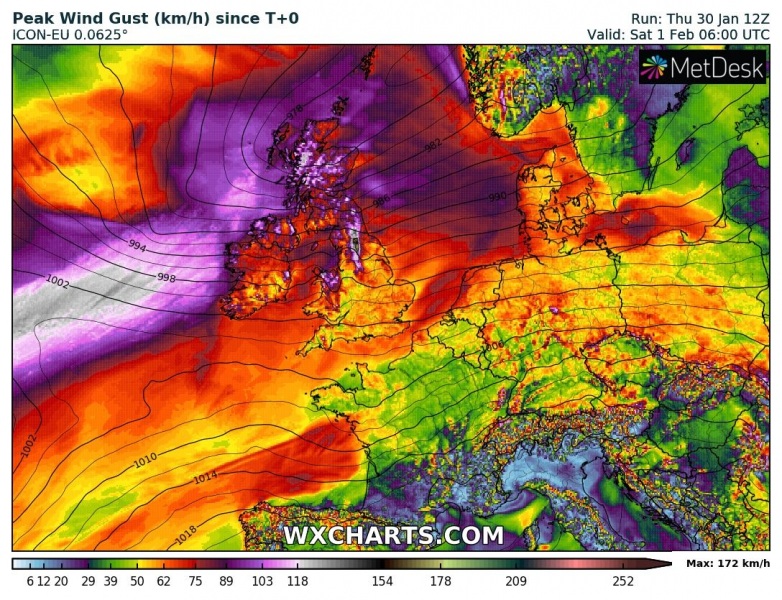 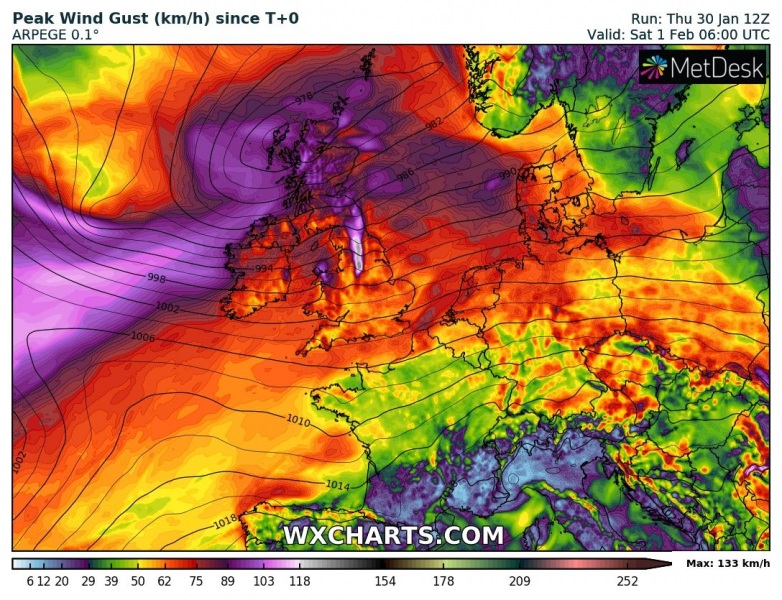 The classic orographic rainfall maximum occurs over western Scotland (Highlands), locally 50-70 mm will be possible until Saturday morning. But nothing too significant. 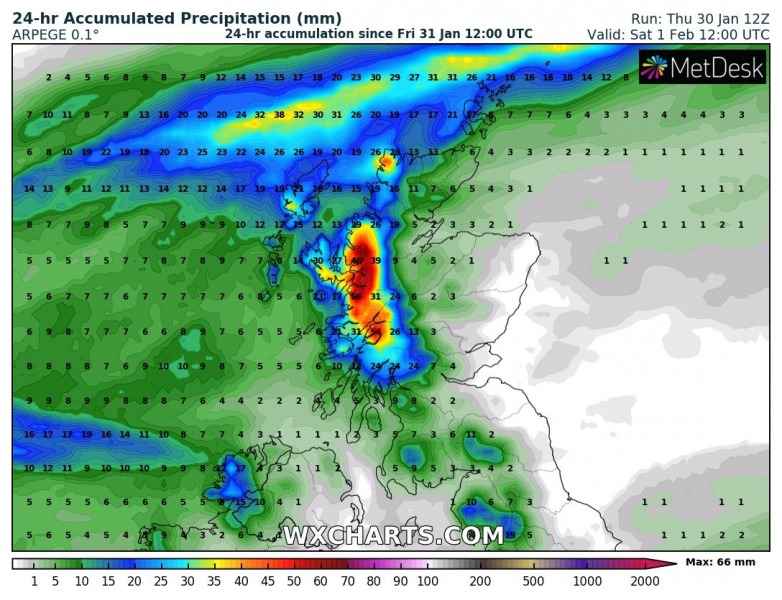 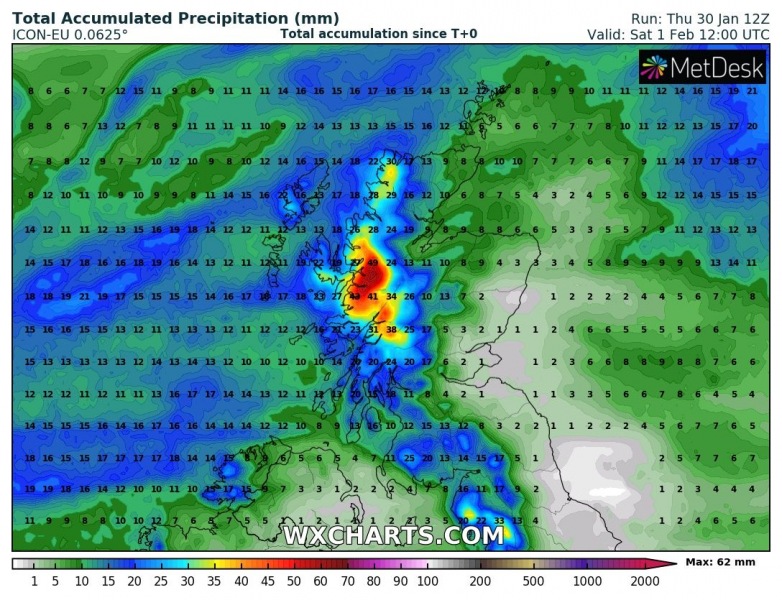 Close-up view of the peak wind gusts swath and the associated waves – gusts close to 70 mph (= 110+ km/h) and waves in excess of 30 ft are likely just west of Irish western coast. 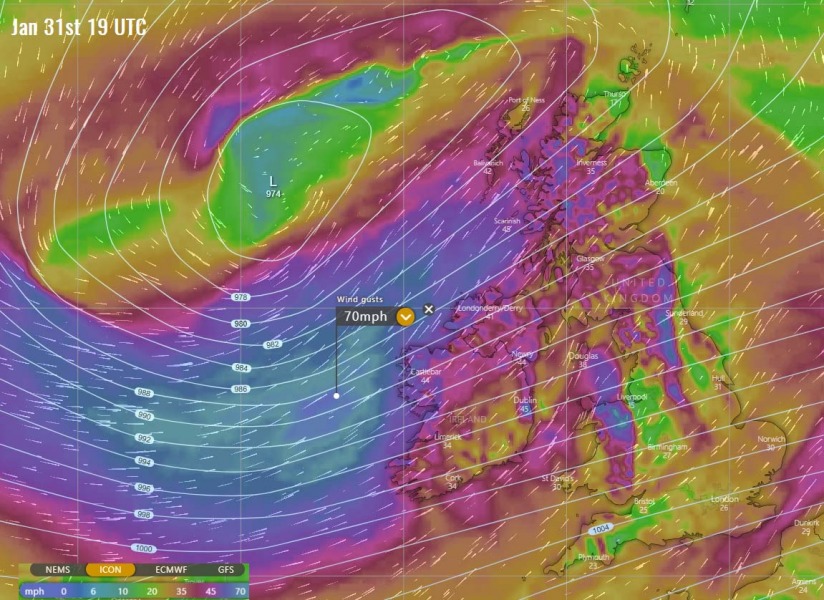 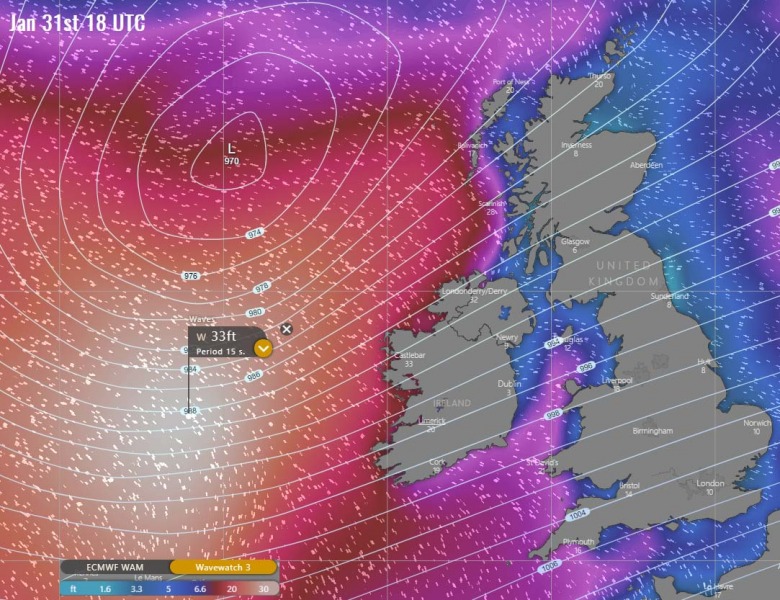 A temporal pattern flip is coming next week, delivering a cold outbreak across western and central Europe:

But then, what can we expect through mid-February? Models are trending towards the *very* dynamic North Atlantic due to positive NAO index: