Early February seems to be on track with the Arctic cold outbreak across the large part of Europe – both global models are nicely aligned it will develop after Tuesday. First, there will be an extreme warmth over south-central Europe but will be replaced with a big blast from the Arctic region. Let’s take a look over the latest model guidance as ECMWF and GFS models are spreading the much colder airmass across western and central Europe first, then also across the Mediterranean, the Balkan peninsula, Iberia and even far south into North Africa! Indeed with snow in some regions!

The pattern flip is supported by both global models, developing a powerful upper-level ridge over the North Atlantic and lead into the cold outbreak on its eastern flank across western Europe first, then also into central Europe, the Balkan peninsula and the Mediterranean. There are some minor differences in the model trends; while the ECMWF shoots the trough and cold into western Europe, GFS is leaning more easterly trajectory but still spreads the cold into western Europe as well. Upper core spreads over the northeast North Atlantic late Monday to Tuesday, gradually deepening while drifting south-southeast into western Europe and towards central Europe and the northern Mediterranean on Wednesday. 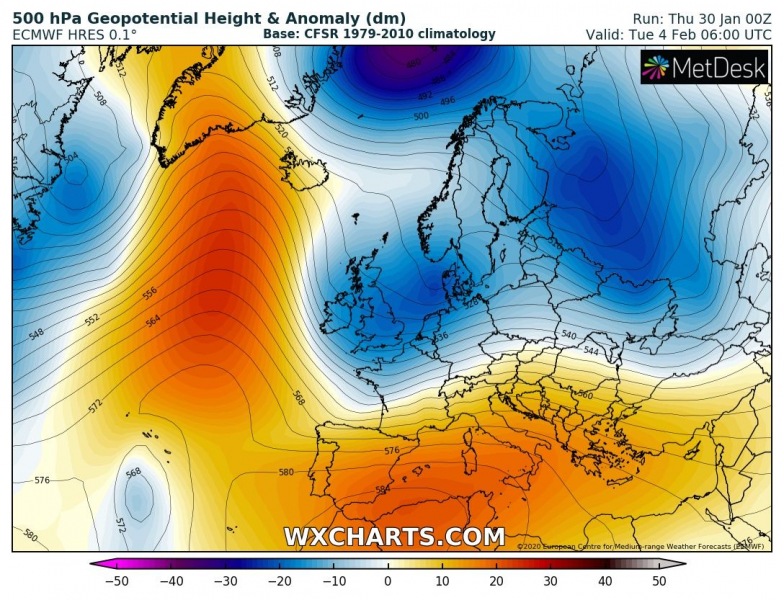 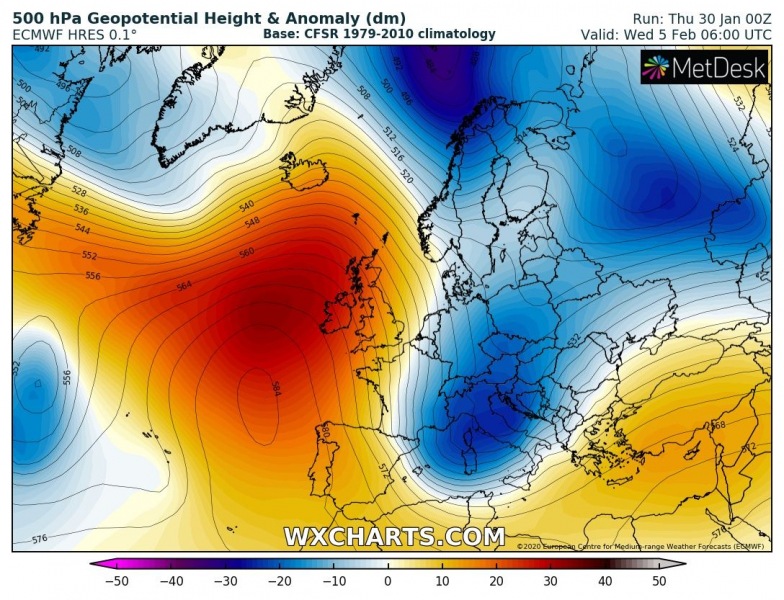 The cold outbreak starts over the eastern parts of North Atlantic on early Tuesday morning, gradually spreading across the UK, Ireland, the Bay of Biscay and France through Tuesday, reaching central European countries overnight to Wednesday. Through the morning and daytime hours of Wednesday, outbreak spreads into the Balkan peninsula, the Mediterranean and the Iberian peninsula. Reaching the far south Mediterranean on Thursday! 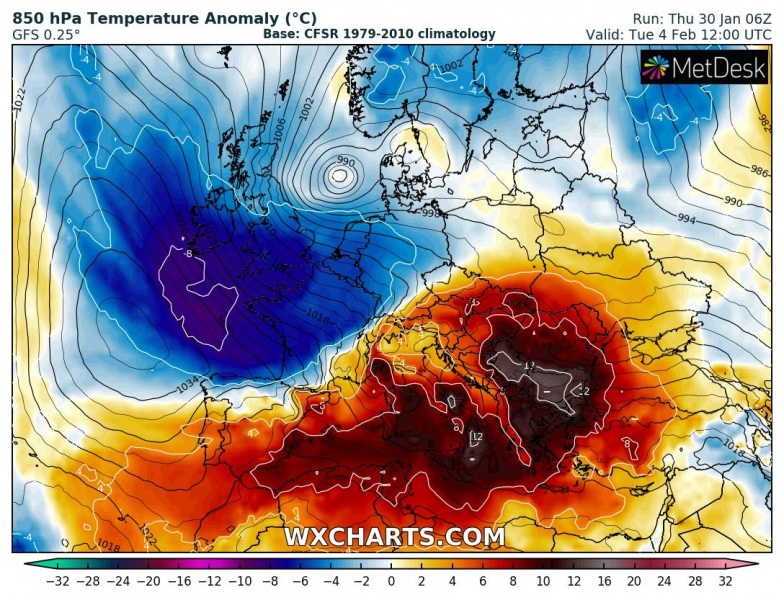 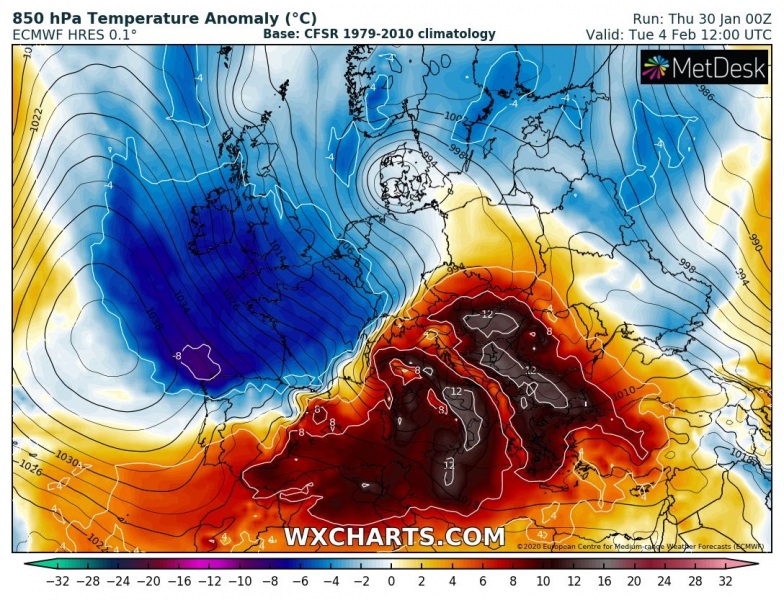 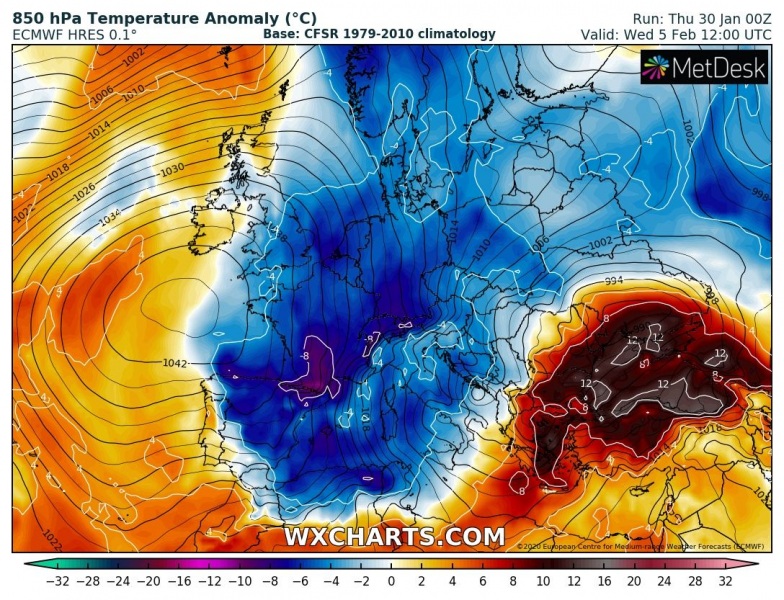 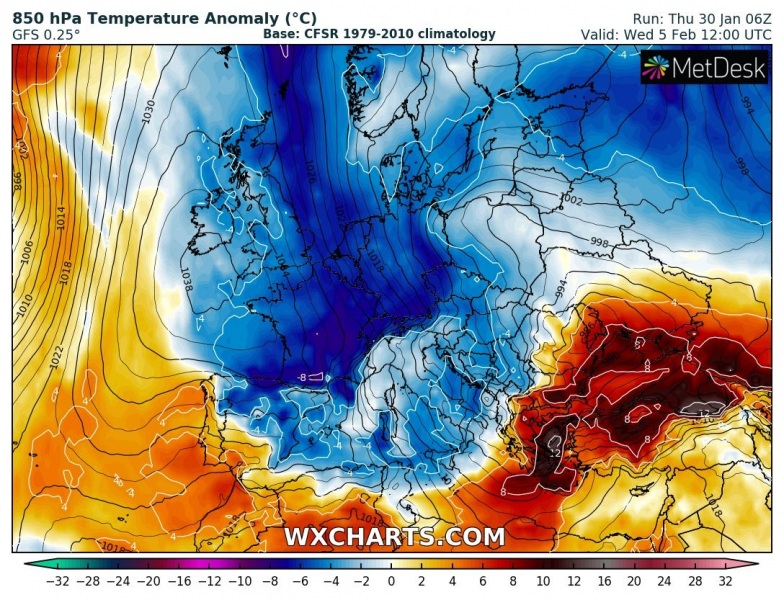 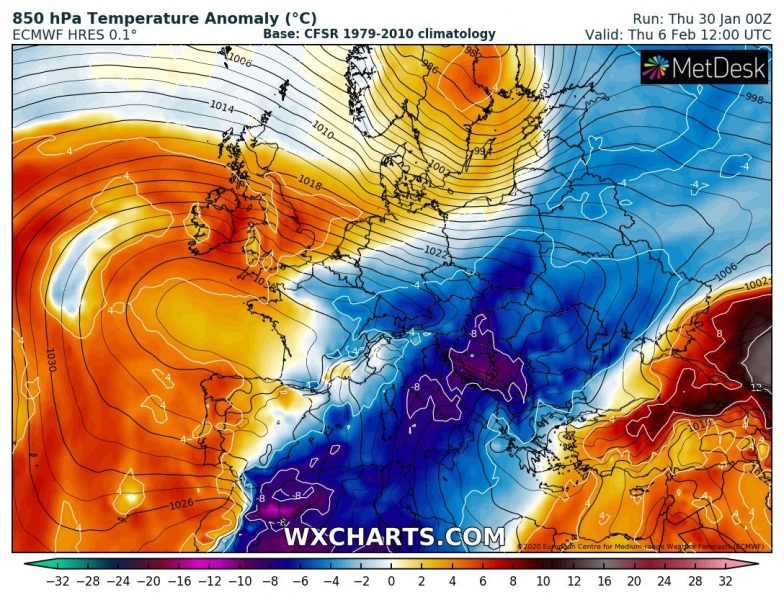 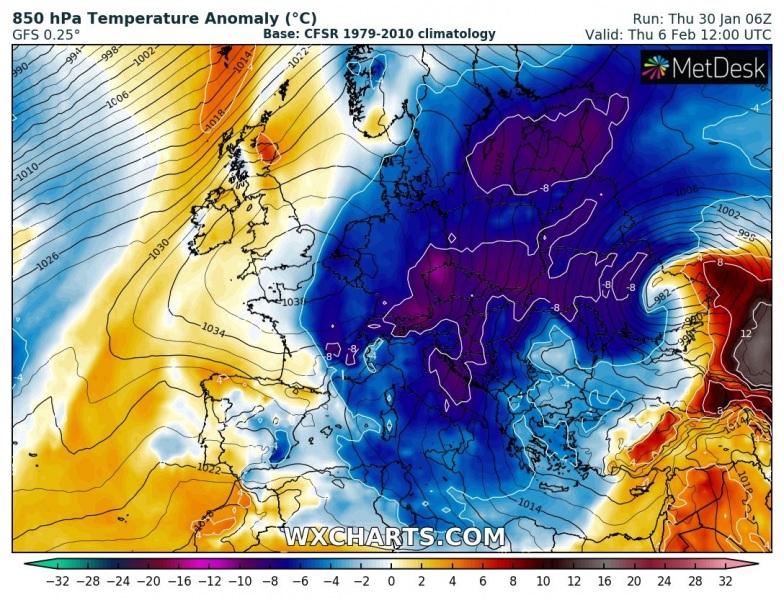 Here is a closer look over the 850 mbar temperature anomalies across western and central Europe: 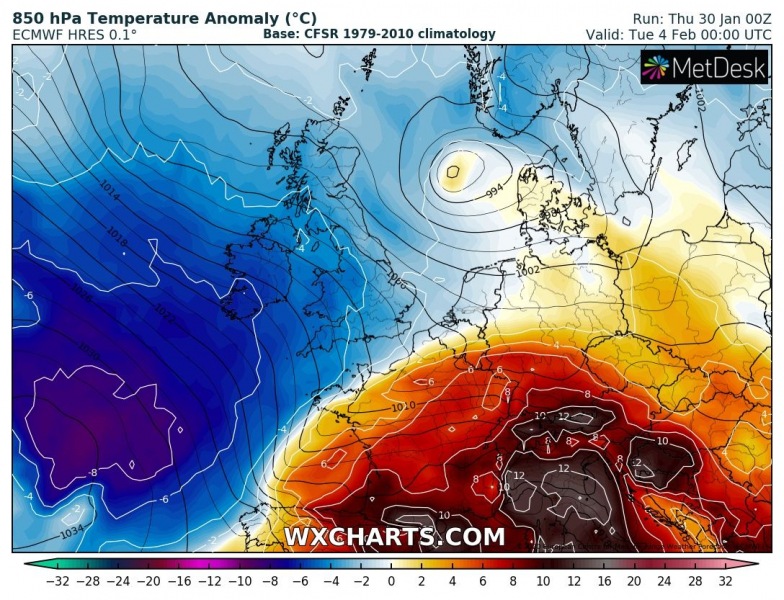 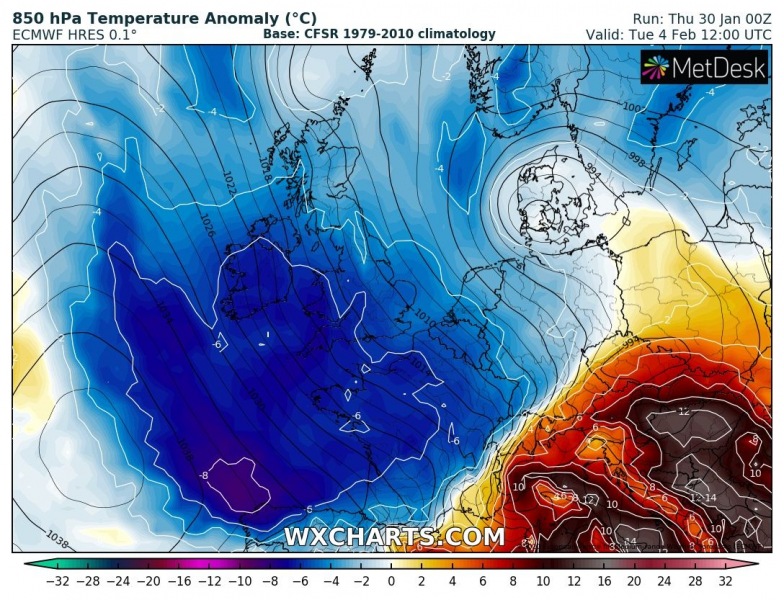 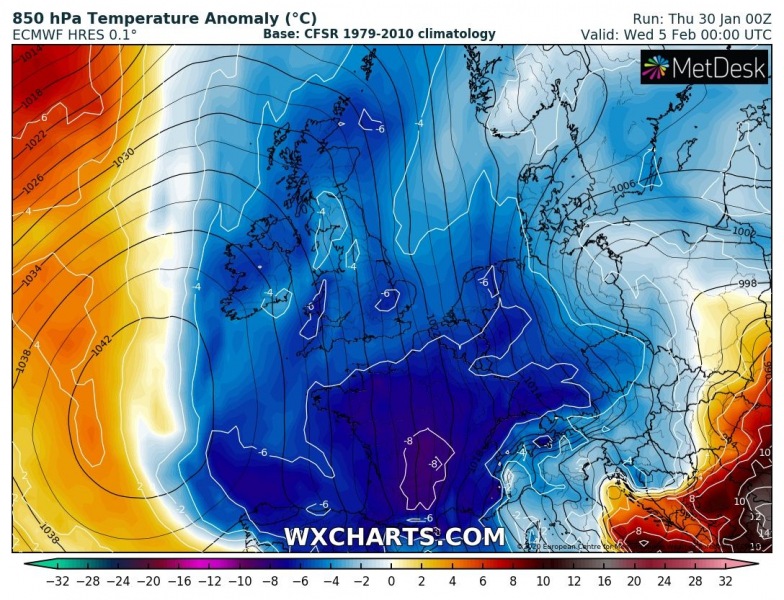 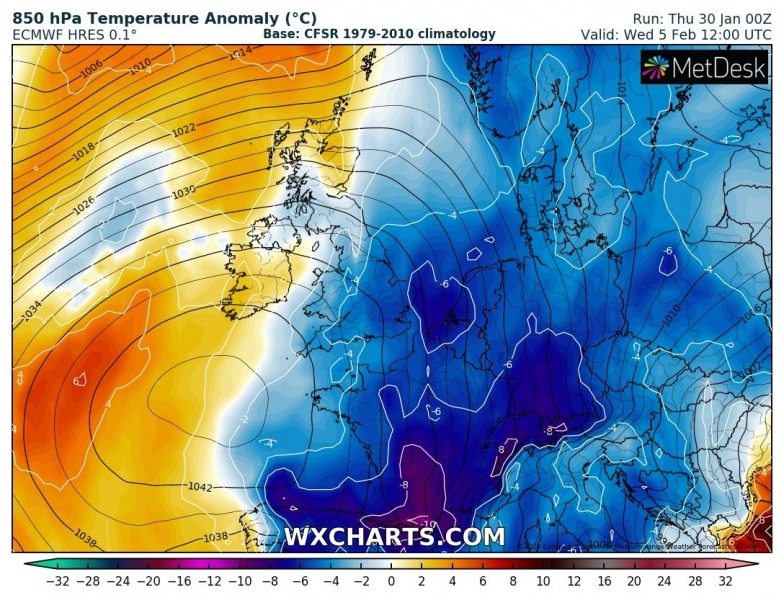 Depending on the moisture advection, snowfall will develop with the frontal system along the leading edge of the cold outbreak. Huge amounts of snow will result over the Alps, potentially also over the western Balkans. But fresh snow could also result across Germany, E France, Czechia, and Poland. Some snow is also possible in parts of the UK. 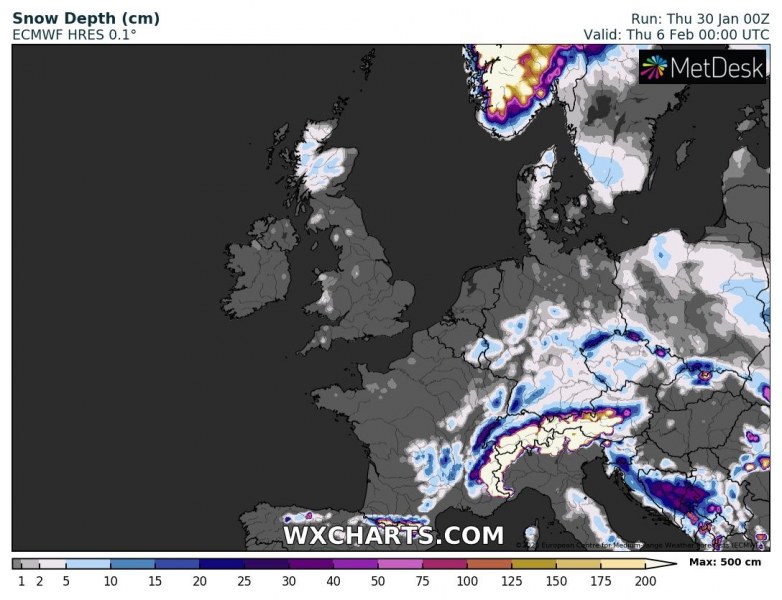 Recap: The pattern flip is more or less well on track with the previous thinking, it will happen in the early days of February. This will bring a cold outbreak across a large part of Europe, spreading also far south into the Mediterranean and North Africa. What happens during the second part of the week is yet to be analyzed, some chances exist for a very intense cold across the eastern half of Europe, but we need to wait a couple of days more to see how the first outbreak unfolds.

We are indeed monitoring the evolution further and will keep you updated in the coming days – stay tuned!

These days, literally a train of cyclones is crossing the North Atlantic, bringing windstorms into UK and Ireland:

But what can we expect after this cold outbreak? Here are our 10-20 day outlook: