Dynamic North Atlantic continues this week. Today, two low-pressure systems have formed and both are heading towards the UK and Ireland, delivering severe winds ang high waves. First cyclone arrives tomorrow (Thursday), another one arrives on Friday’s night. Future trends suggest almost like a train of cyclones will head into western Europe.

Visible satellite image across the North Atlantic with developing low-pressure systems this afternoon – two cyclone tracks are marked as well. Both systems were analyzed with central pressure around 980 mbar at 12 UTC today, Jan 29th. They are traveling northeast towards western Europe. The first one tomorrow will deepen into around 970 mbar while the second one on Friday’s night will be even deeper, and stronger! 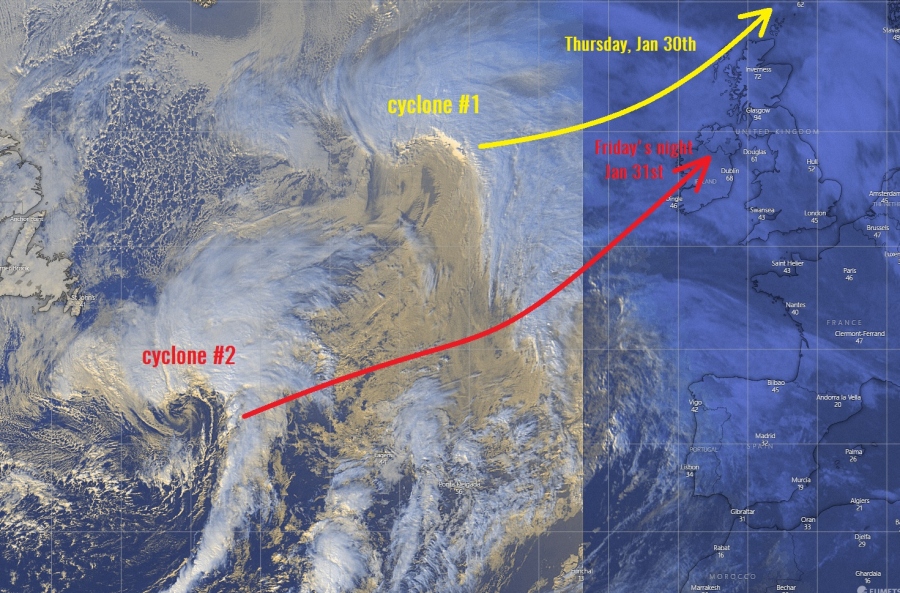 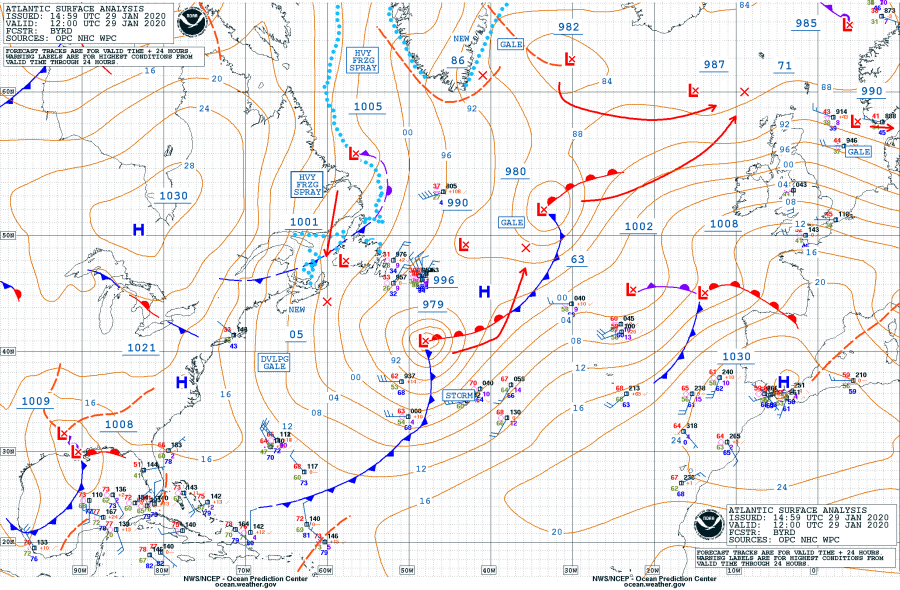 The current pattern over Europe is supporting strong ridge across southwest Europe with a decaying / ejecting long-wave trough across eastern Europe. Over the Atlantic, a train of deep waves is pushing cyclones towards western Europe, one moves across the northern UK tomorrow, Jan 30th. An associated cyclone crosses to the immediate north of Scotland. 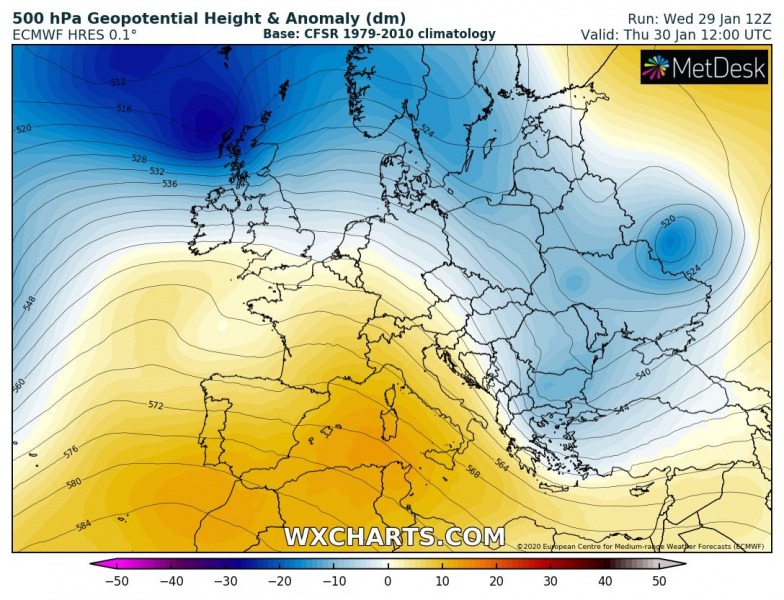 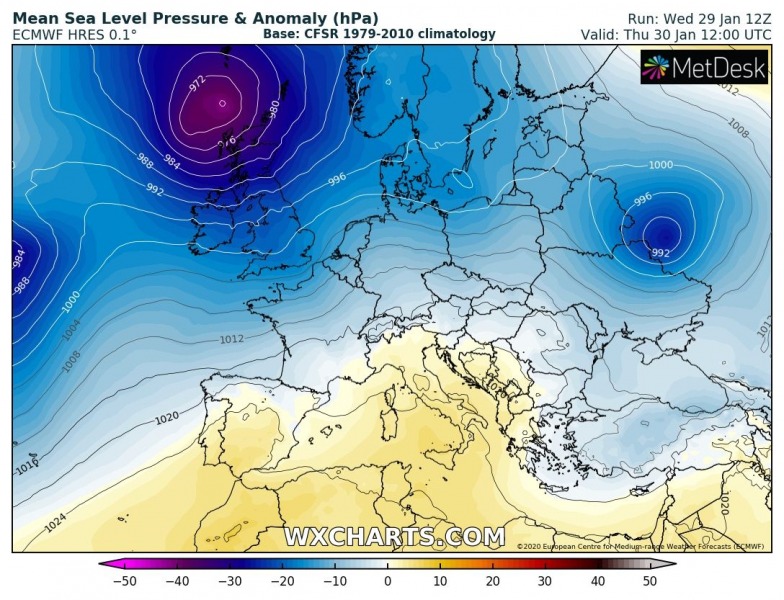 Here is the 3-hour sequence of the cyclone’s track from west of Ireland towards the northeast, passing to the north Scotland during Thursday’s afternoon. Peak gusts will likely exceed 120-130 km/h over the open sea, potentially reaching around 120 km/h (= 75 mph) along the western Scotland, even higher across the Highlands – likely 150-170 km/h (= 90-100 mph)! 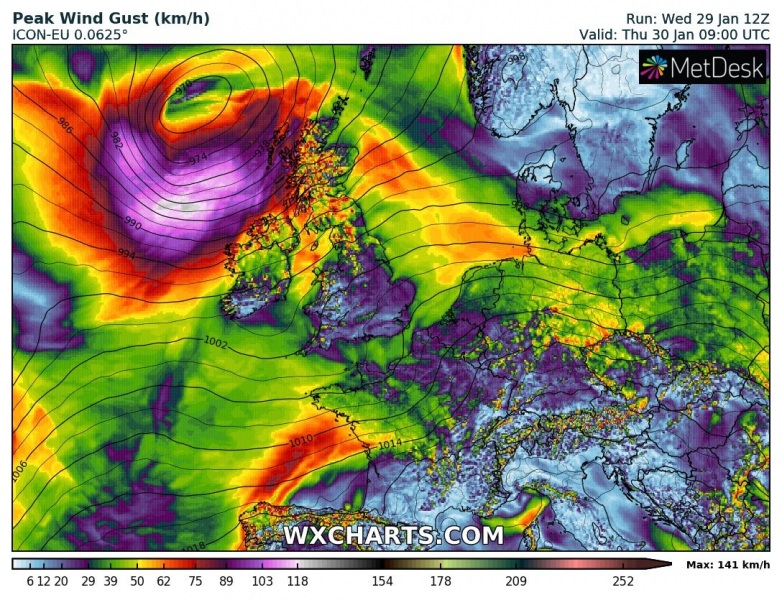 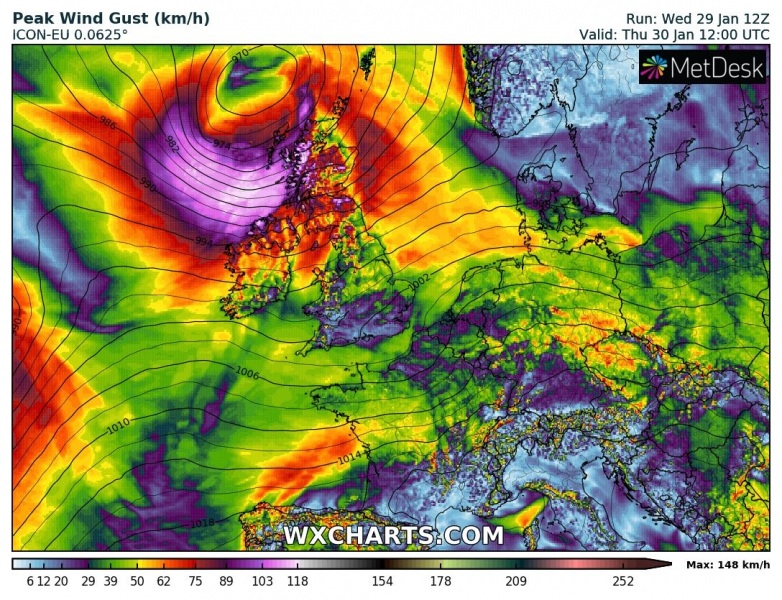 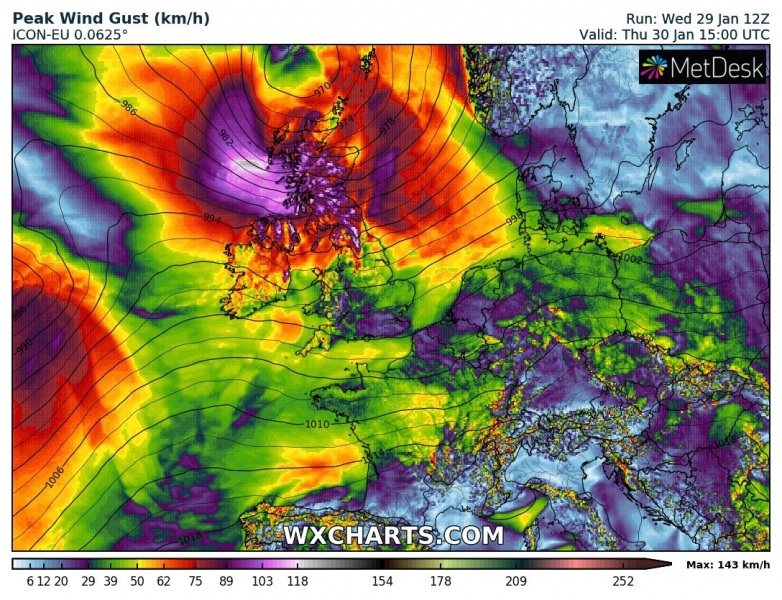 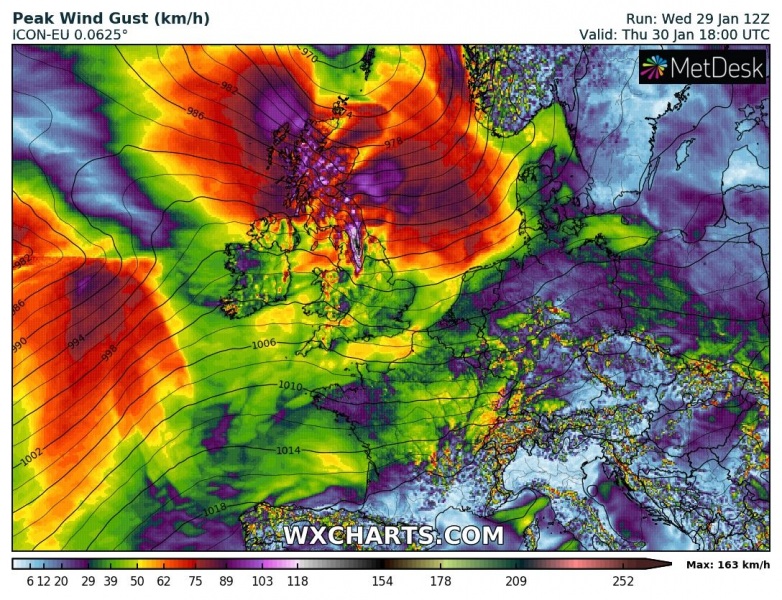 Close-up view on the UK with peak gusts, based on the ICON-EU model: 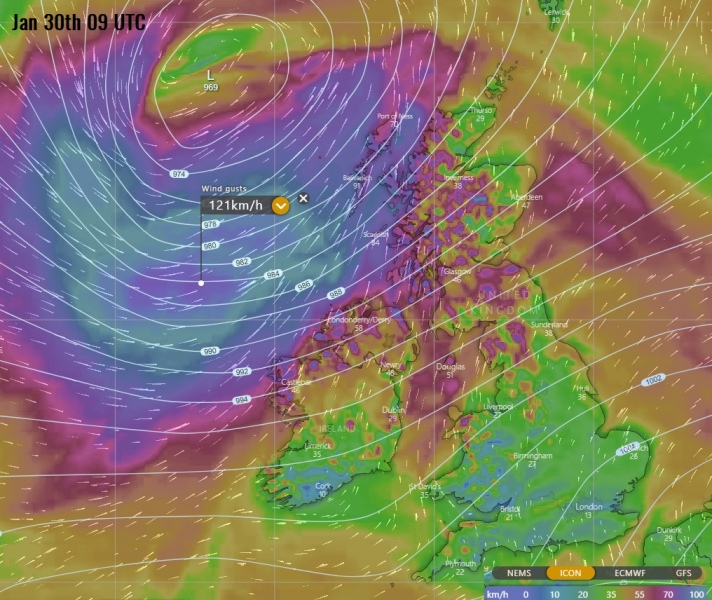 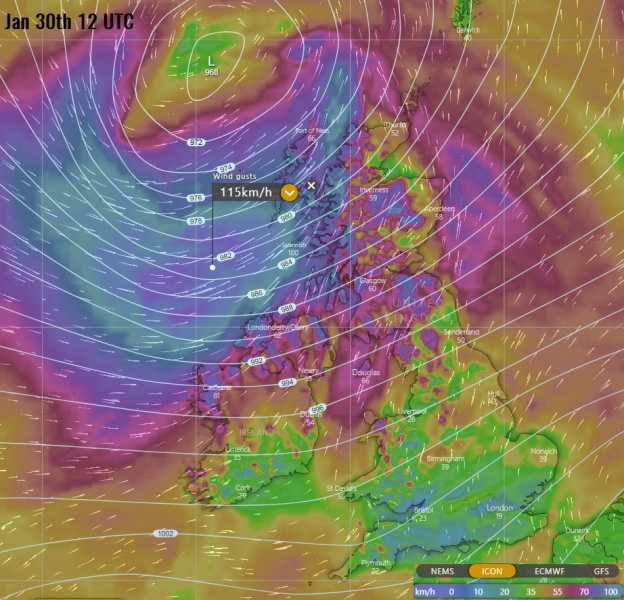 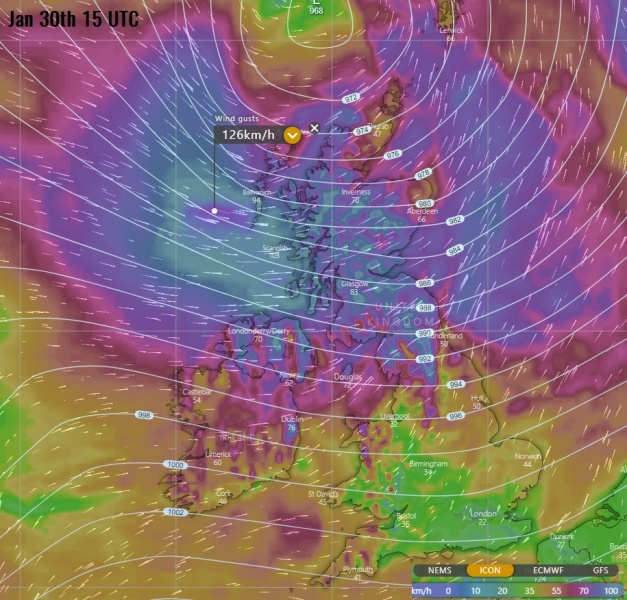 ICON-EU peak wind gusts swath across UK and Ireland until Friday morning – a broad swath of severe winds will spread across Northern Ireland and whole Scotland, partly also across the northern England: 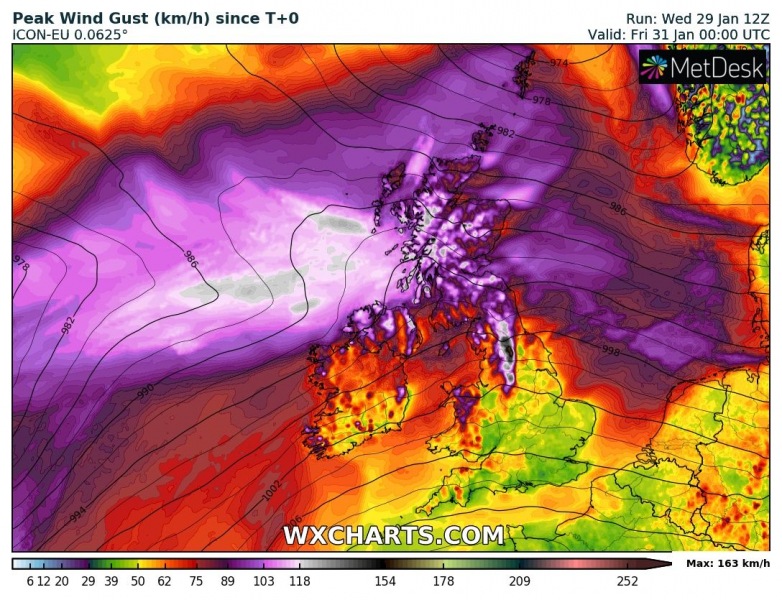 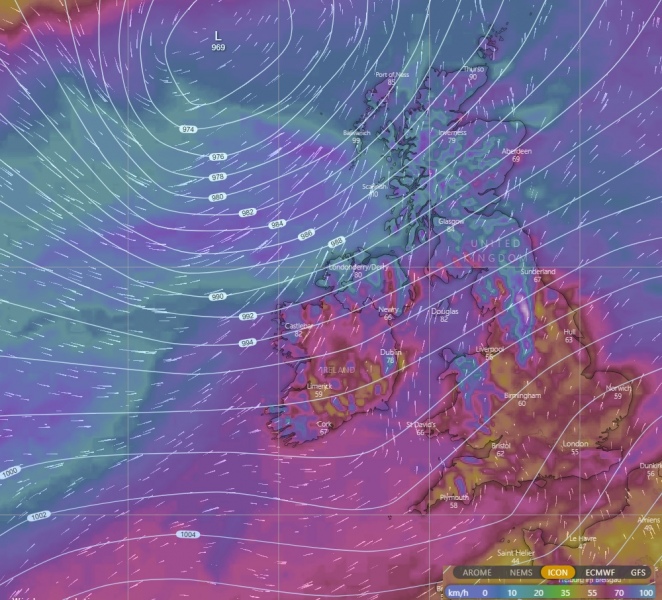 The first cyclone will likely deliver waves up to around 20 ft, affecting Northern Ireland and western Scotland during Thursday afternoon and evening hours. The second system will deliver higher waves due to stronger and wider wind field, potentially even significant wave heights in excess of 30-35 ft. 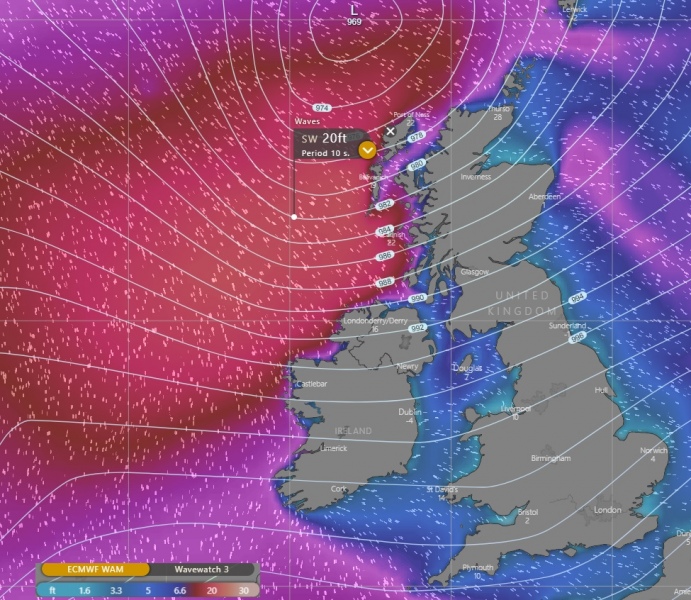 Stay tuned for updates and details on the 2nd system tomorrow!

See also – Models are trending into the pattern flip with cold outbreak next week: