While the stratospheric vortex undergoes a warming phase, the activity in the troposphere continues at its own pace. This is something we warned about, as the current circulation patterns seem to be too strong for now, to be largely affected by the stratospheric activity.

In the shorter range, we are currently monitoring a likely cold shot developing for parts of Europe in the coming days.

In the 10-day range, a strong ridge is developing again in the North Pacific. That is set to support the atmospheric wave downstream , which supports a pressure drop in the North Atlantic. This setup also enables lower pressure over the Canadian and the west USA sector, which promotes northerly flow and colder air transport. We can see that, on the temperature anomaly graphic, which shows the colder air sitting over central Canada, extending down into the western USA. 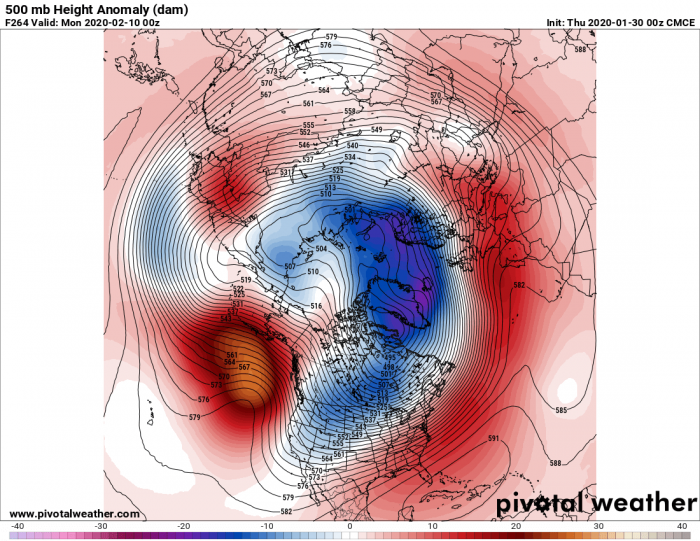 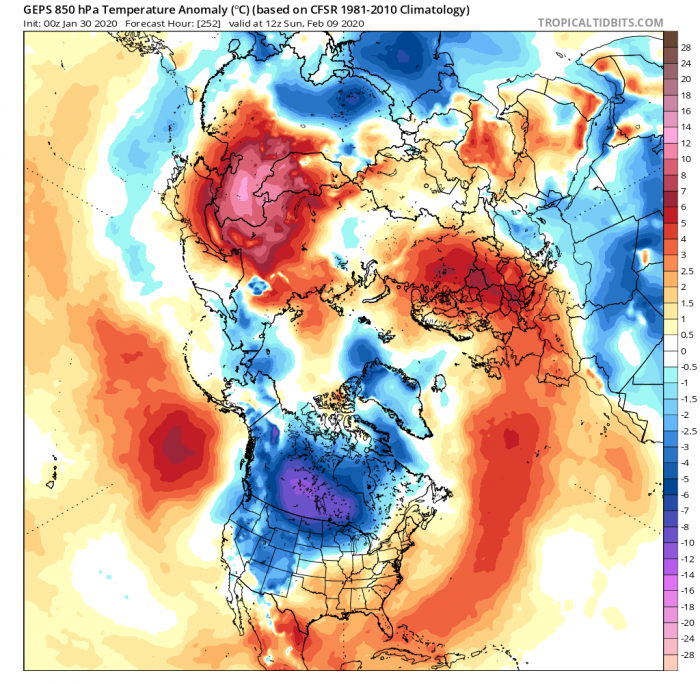 Early next week, the positioning will continue, pushing the Pacific ridge further north and stabilizing the low pressure and northerly flow over the western United States and the North Atlantic. We can see the colder air spreading further east and expanding down into the N/W USA. On the other side of the Atlantic, in the warm air advection, a high pressure area starts to build and will warm up the European continent after the brief cold period. 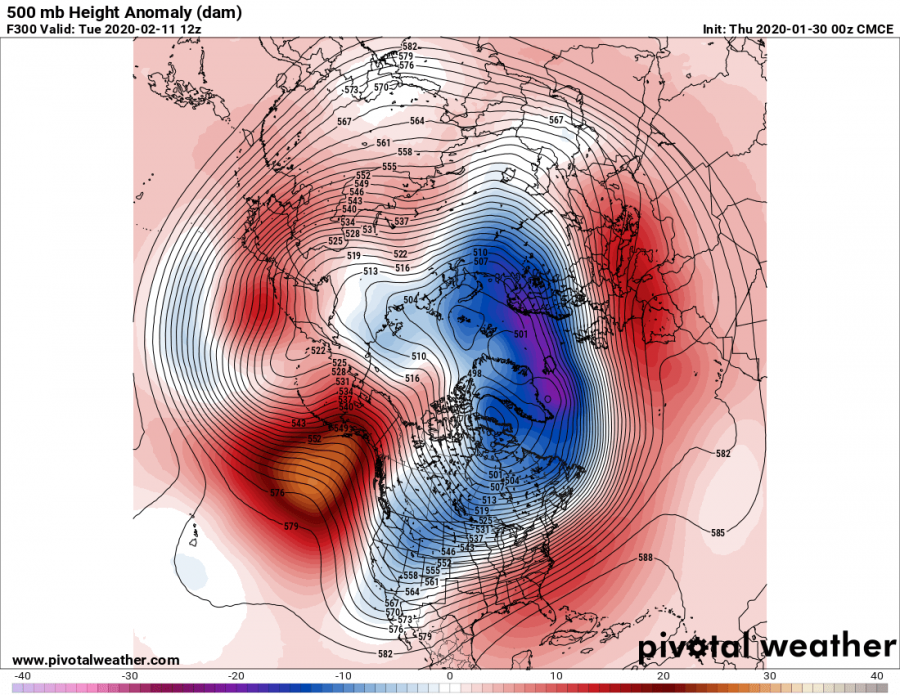 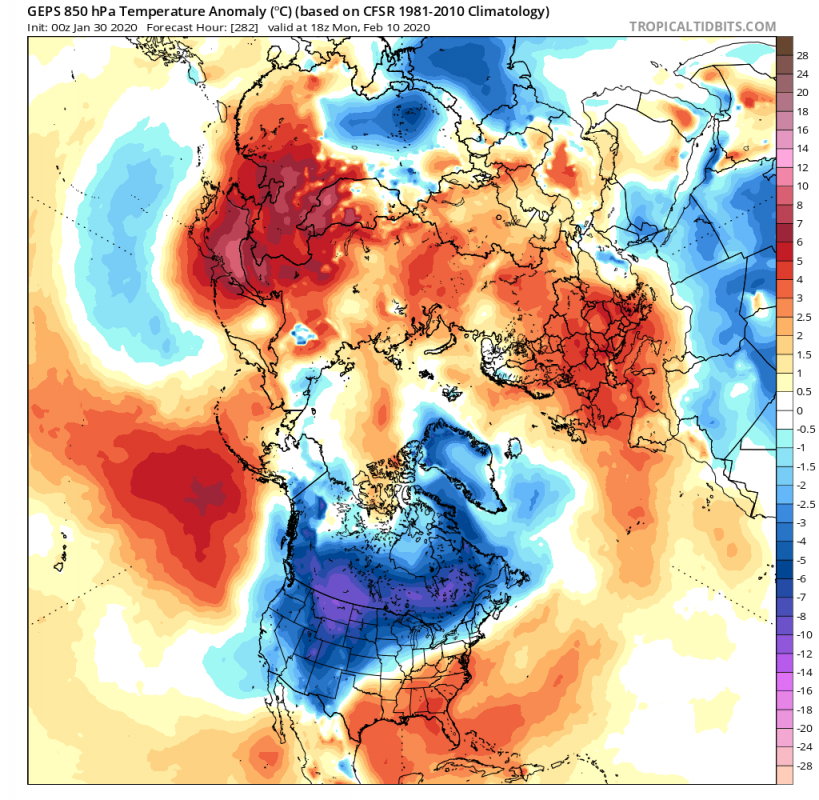 Such a pattern can sustain itself and as we see, the geopotential height (hand-in-hand with pressure), is further lowering in the North Atlantic. The low pressure extension remains over the western USA, in combination with a ridge further west in the Pacific. This is called a negative PNA (Pacific North American) pattern. It means lower pressure in the NW and higher over SE. It produces colder weather in the N and W United States and west Canada, while the southeast USA remains fairly mild in the southerly/westerly flow, produced by the lower pressure in the west. In the Atlantic, we see colder air pouring over the ocean from the northerly flow, which further enhances deep low formation. We can see this even at this 16-day ensemble range, which is pretty spectacular. This is a very strong positive NAO (North Atlantic Oscillation) and negative PNA (Pacific North American) pattern. It is the main mode of operation this winter, dominating the weather and producing one of the mildest winters in recent times over Europe, and also in some parts of the USA and southeast Canada. This upcoming +NAO phase again seems unusually strong. In addition, we also have to note the quite higher than normal temperatures over the E Asian sector where higher pressure is also building. 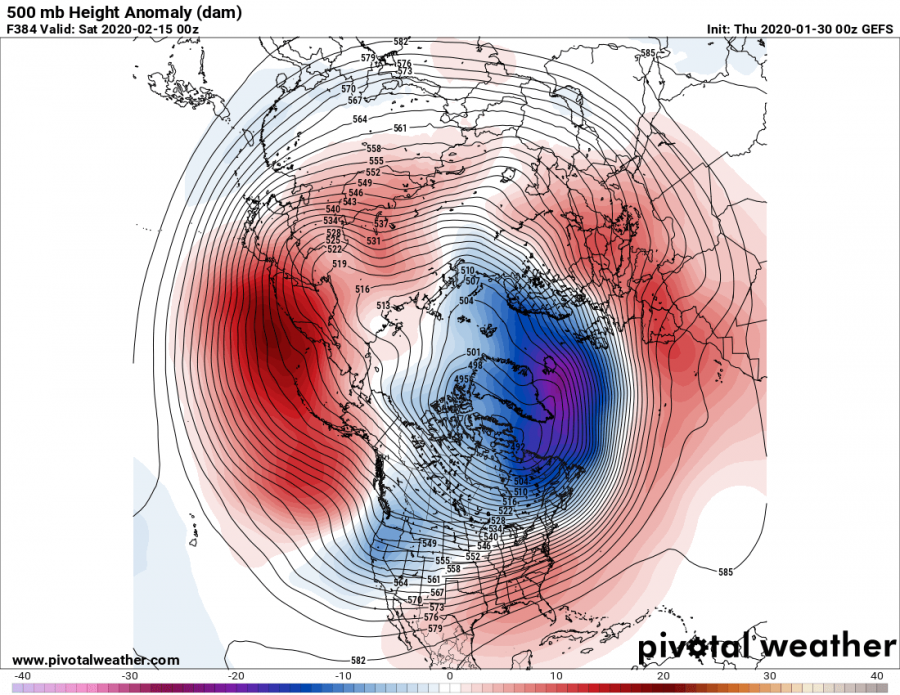 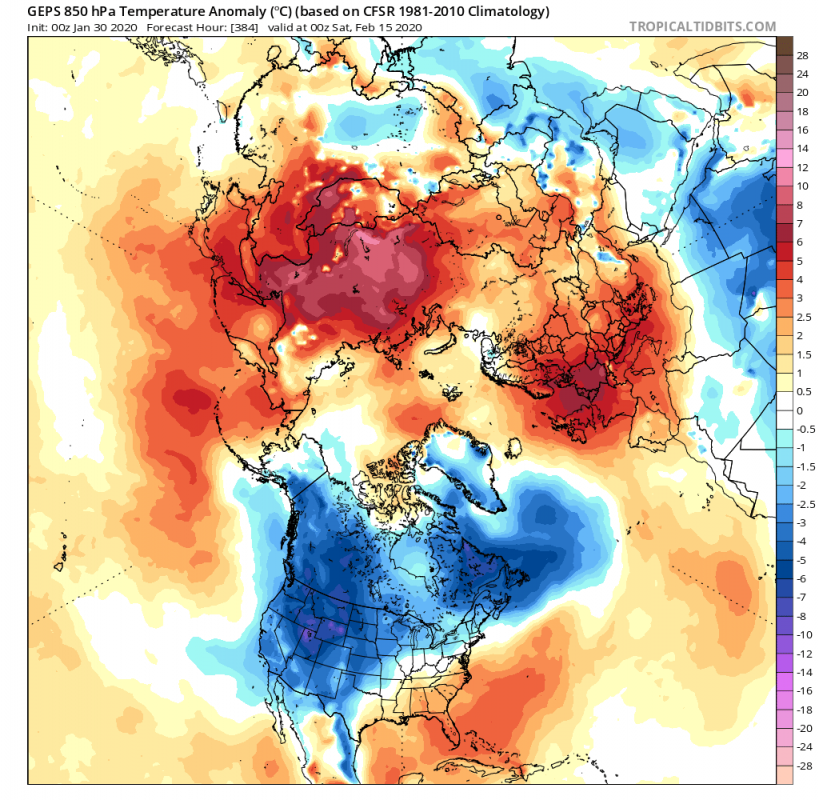 On the surface, we see quite a massive low pressure field in the Atlantic, extending over Scandinavia into east Siberia. This is an ensemble average, so the final picture will not look like this, but will be more individually defined by high and low pressure areas. But this picture is important, as we see a broad low pressure area in the North Atlantic, which promotes warmer milder flow into Europe, but on its western side, it actually promotes northerly colder air into parts of east and southeast Canada. Some colder air can also extend into parts of the NE USA. In the Pacific we have a high surface pressure area, which is responsible for the negative PNA pattern, and the active colder air transport into the west, north and parts of central United States. The lower pressure extending into east Siberia, actually promotes southerly flow into W Asia and Siberia, building high pressure and raising temperatures quite above normal. 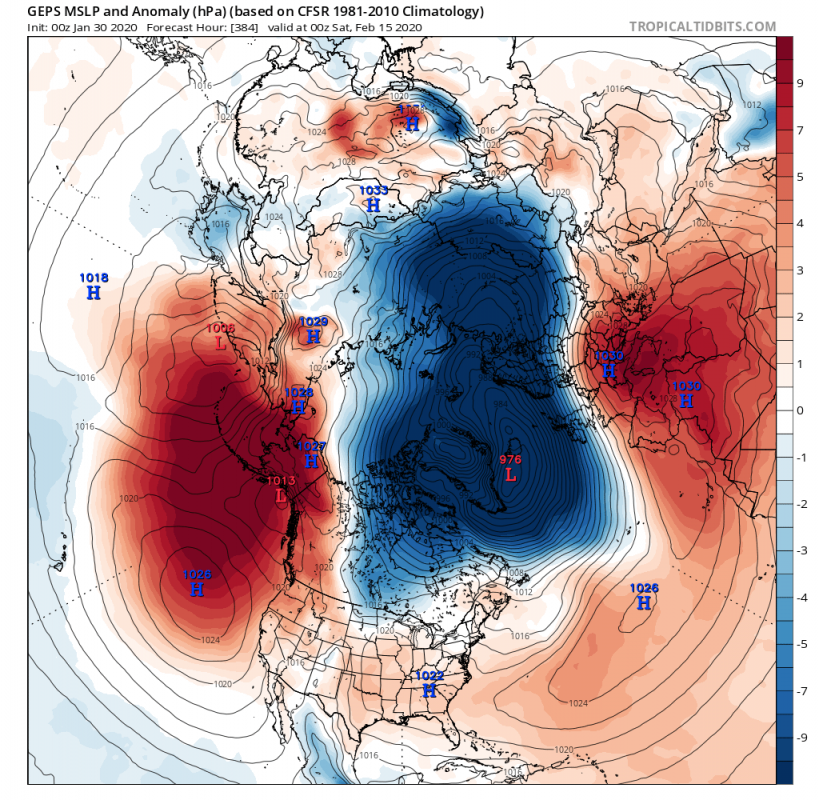 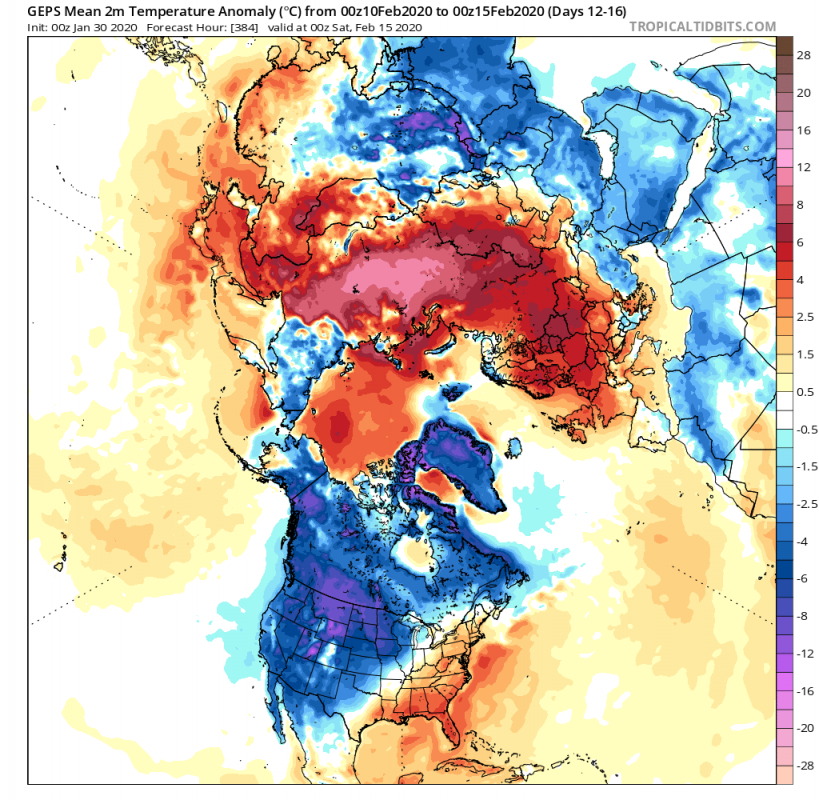 We can see the actual forecast for the NAO and PNA, which are opposite (one positive and one negative), which is a typical mild Europe and SE USA / Colder N and W USA combination. 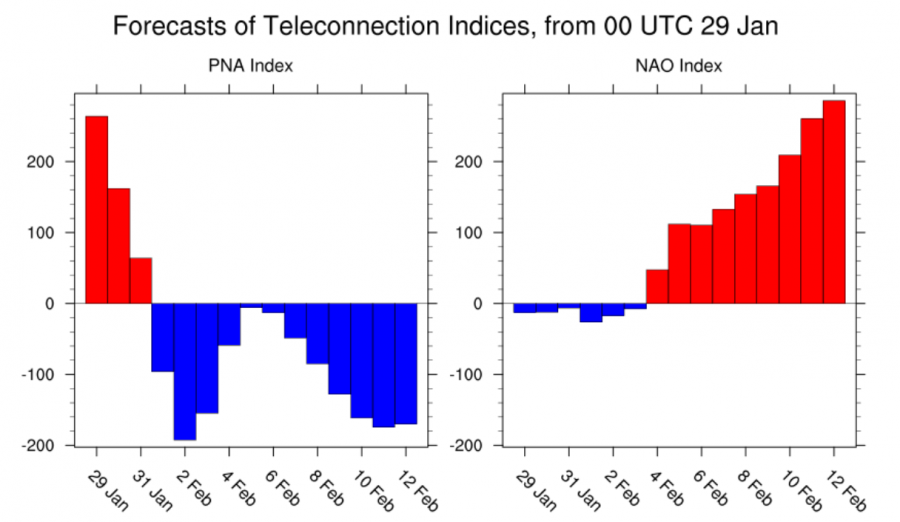 Looking at the extended range, we see this pattern quite sustained till the end of February, meaning till the end of Winter. This circulation pattern seems to be too strong to allow anything in the stratosphere bother its dynamics. Changes are still possible, since this is nonetheless weather, and nothing is set in stone, except perhaps the low pressure over the North Atlantic this winter. 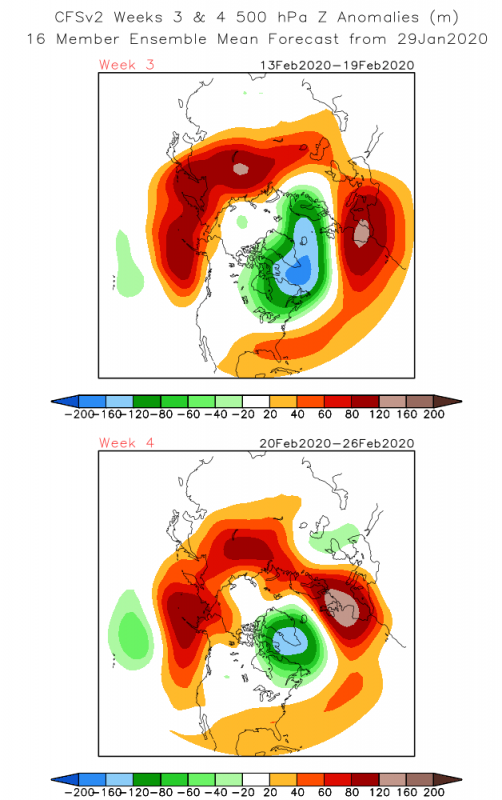 To summarize, the developing pattern in the 10-20 day range promotes what we have seen a lot this winter. Milder conditions over Europe, with normal to below normal precipitation in central and southern Europe, and wetter and windy conditions over northern parts. Over North America, we have the negative PNA dominating, promoting colder weather over Central Canada and also extending into eastern parts. In the United States, we expect the SE to be under a more milder flow, while north and western parts will be more exposed to colder northerly flow. The central area can see a bit of both worlds, as low pressure areas transition across the country. In the NE USA, some colder air is generally likely, as a more northerly flow could establish, as discussed above.

We will keep you updated on any important further development. While you wait for more updates, don’t miss the early Spring 2020 and February long-range outlook, where models have hinted at such development: