A deep North Atlantic depression is developing between the Azores and Newfoundland and is gradually moving towards western Europe this weekend. It will strengthen into a powerful extratropical storm. Massive waves and severe winds will spread towards Ireland and the UK over the next few days. Heavy rain could locally result in river flooding.

The European continent is not entering a more stable pattern this weekend into next week, while a dynamic pattern with deep North Atlantic upper troughs will persist to the west. Also developing deep surface cyclones within a period of the next 7-10 days.

The first system has already born on Thursday, located roughly in between the Azores and the Newfoundland this Friday evening. The system is deepening and expected to become a powerful extratropical storm. It will generate massive waves and severe winds towards the Bay of Biscay, Ireland, and the UK this weekend.

Unfortunately, the deep extratropical storm will also disturb the spectacular celestial show in the coming days, a peak of the Geminid meteor shower happens on Sunday night, Dec 13/14th. Dense clouds will cover a large part of western Europe, so very low chances are to observe the sky show.

The extratropical will be very deep, generating a lot of winds and moisture into western Europe. Attached below is the video animation of its development over the weekend, with a very deep trough with an associated surface low moving towards western Europe on Sunday and Monday.

The effect of this low-pressure system will extend into early days next week.

Now, let’s take a look into some more details what’s coming up for the UK and Ireland this week:

Satellite imagery on Friday afternoon has revealed a quite impressive structure of the deepening low, moving towards east-northeast, located somehow in between the Newfoundland and the Azores.

A huge coma cloud is seen to the north of the center while a broad cold Arctic air mass is spread behind the low from Canada.

The close-up view of the core reveals a massive push into the core with an occluded front wrapping towards it. Quite some convective cells is also visible to the north of a deepening center.

The central pressure of the low has already pushed to 979 mbar by Friday afternoon (18 UTC), while the low is moving further east tonight.

Below are the surface analysis data for the mean sea-level pressure estimates by the NOAA Ocean Prediction Center (OPC). The analysis reveals the storm’s evolution from its birth off the Northeast United States on Thursday morning until Friday afternoon: 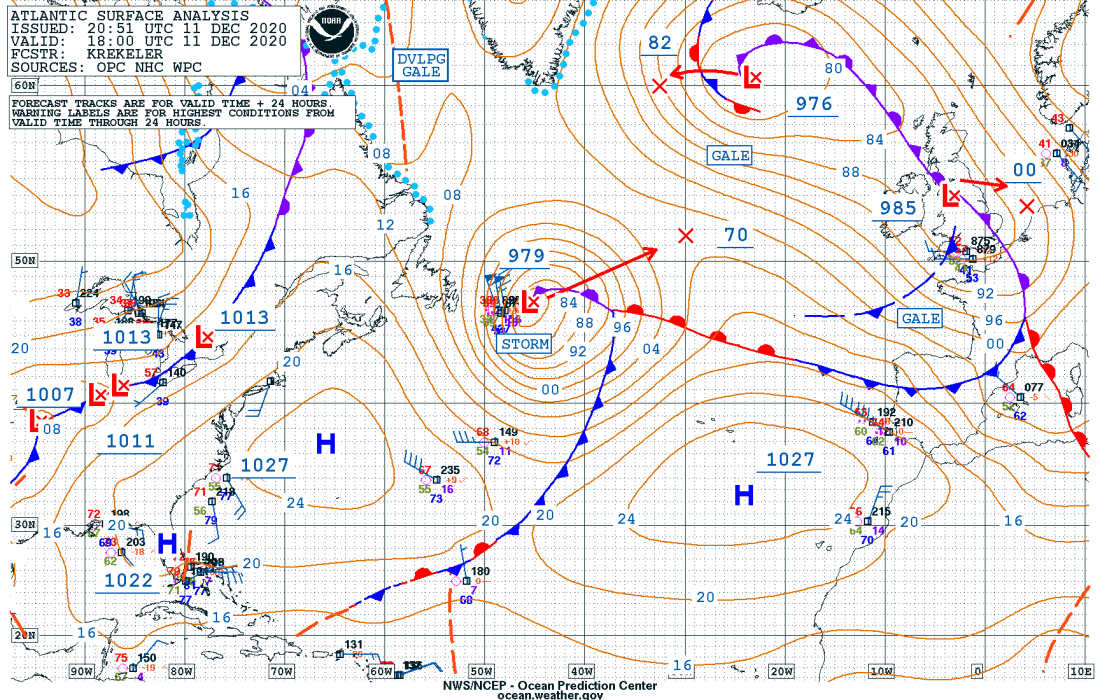 As we can see from the pressure analysis above, the central pressure in this newly developing extratropical storm had a 17 mbar drop over the 24-hour period between Thursday 18 UTC and Friday 18 UTC. Rather gradual but steady strengthening is seen since its birth earlier on Thursday.

The system will become a powerful North Atlantic storm, with an additional around 15 mbar pressure drop until its peak which is expected on Sunday. The central pressure should stay around 965 mbar after the system matures through Sunday night into Monday.

The extratropical storm in expected to move generally east over the North Atlantic this weekend and peak on late Sunday when located to the west-northwest of Ireland and the UK. The system will become very large, basically dominating the whole North Atlantic.

On Saturday, the low will already be pushing its central pressure into mid 970s, continuing east to the north of Azores. While an elongated low-pressure system will be still placed across western Europe and far North Atlantic.

A surface high-pressure system will maintain over the Azores, centered to the south of the archipelago.

On Sunday, a blocking high over the Azores shifts west towards the northwest Atlantic, while the extratropical storm continues intensifying. Its central pressure will deepen below 970 mbar, potentially peaking at around 965 mbar by Sunday afternoon and evening hours.

At that time, it will be located roughly to the west of the UK and Ireland. A strong pressure gradient will develop across its southeast and southwest quadrants of the storm.

On early Monday, the low will mature while staying rather stationary to the west of the UK and Ireland all day. The central pressure will maintain in the mid-960s. A huge system will have a strong pressure gradient across western Europe, Iceland, and on the other side of the low.

The cyclone will be gradually drifting north-northeast through Tuesday. The central pressure might rise a few mbars, but it will remain quite deep, near 970 mbar.

As we can see from the large scale picture, the extratropical storm will dominate most of the North Atlantic. The southwesterly flow will spread warmer weather into continental Europe.

A relatively fast-developing extratropical storm will also generate severe winds, as well as major waves to its south where winds will be the strongest due to the tightest pressure gradient.

And although the overall winds will not be extremely severe, a very large extratropical storm will introduce persisting winds across a broad area. Therefore the high average speed of the winds will develop. Those normally mean high to significant wave generation.

Waves will be gradually expanding across the broader area through Sunday when low approaches its mature stage and peak central pressure near 965 mbar. Waves will remain major with very significant heights around 12 meters.

The major waves will be gradually spreading towards the Bay of Biscay.

As the low drifts north-northeast on Monday, the broad channel of significant waves will push across the Bay of Biscay and reaching southwestern England, Wales, and Ireland during the day. The highest waves will remain high, potentially 8-10 meters over the northern Bay of Biscay, to the immediate southwest to UK and Ireland.

Those could bring some damage to the coastal areas of northwestern France, southwest England, Wales, and southern Ireland through Monday afternoon and evening hours.

HEAVY RAIN ACROSS IRELAND AND THE UK, SOME SNOW FOR SCOTLAND

A broad channel of southwesterly winds will push a lot of moisture across the UK and Ireland, with moderate to heavy rain locally. Higher rainfall sums are expected near the hilly/mountainous terrain over Ireland, Wales, northern England, and indeed Scotland.

There will also be some chances of snow over the Scottish Highlands, as the general temperature forecast will support snowfall in the area. However, no significant amounts of snow are expected over the next 5 days, probably just a few centimeters to around 10 cm in total.