As we discussed in the pattern outlook yesterday, there is an overall trend of mild weather to continue through the rest of January into early February, while the slowly decaying large trough / low from the North Atlantic is nov moving east across Europe with a frontal system. It will deliver some wintery weather in parts of east-central Europe, although nothing close to significant across the lowlands. However, excessive snowfall develops over the western Alps, locally more than 100 cm of snow is likely. After Thursday, much warmer weather returns!

With the frontal system moving across Europe through the first days of this week, a temporal break in the overall mild pattern is delivering some cooler air mass into western, central and eastern Europe.

The frontal system will deliver some precipitation along with the main cold front and also a strong orographic snowfall over the western Alps with the persistent westerly flow. Here is a comparison of ECMWF, ICON-EU and AROME models. They all agree on the excessive amount of snow over the W-NW Alps, locally more than 100 cm seems quite likely until Wednesday / Thursday. Also, there is some snow likely across parts of south-central Germany, Slovakia, Poland, Belarus and Ukraine.

Close-up view over the western Alps by AROME model, most of the snow is indeed expected atop of the Alps near the tri-state border of France, Switzerland, and Italy. Locally 100-125 cm seems possible. This will enhance avalanche potential after Tuesday! 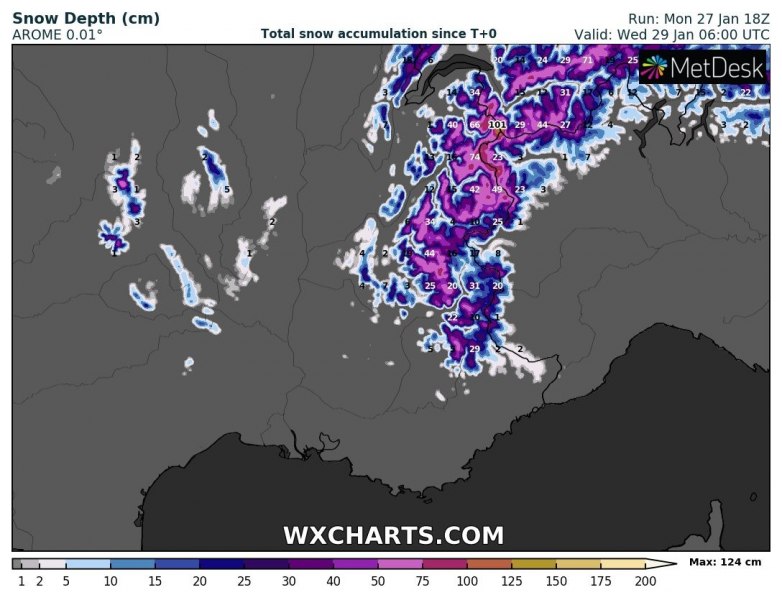 The new stratospheric warming phase is set to start this week: