After a week of spring weather with very warm temperatures across many parts of Europe, a temporal/short cold period develops across part of Europe. A rather strong cold pool brings much colder days again, also some additional morning frost danger into some regions. The southwards racing surface cold front brings some fresh snow into the western Balkans as well.

The overall pattern supporting this evolution reveals a strong upper-level ridge over the North Atlantic with a deep trough over Scandinavia. Trough moves meridionally (due south) along the eastern flank of the ridge towards east, central and southeast Europe over the next few days. Notice also a deep upper-low to the immediate west of Iberia traveling towards Azores: 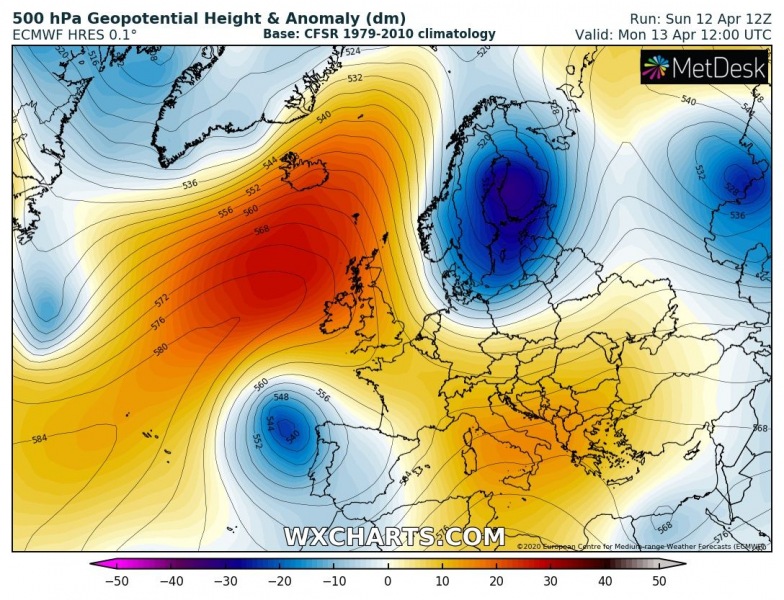 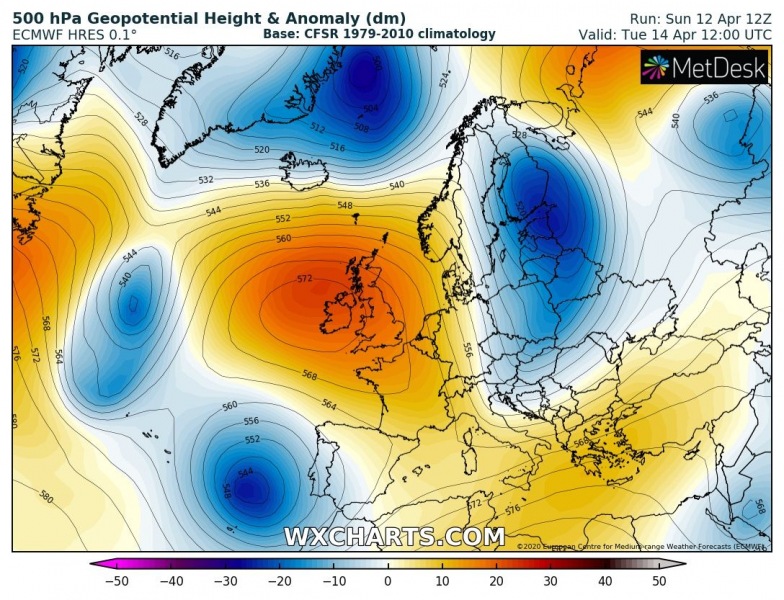 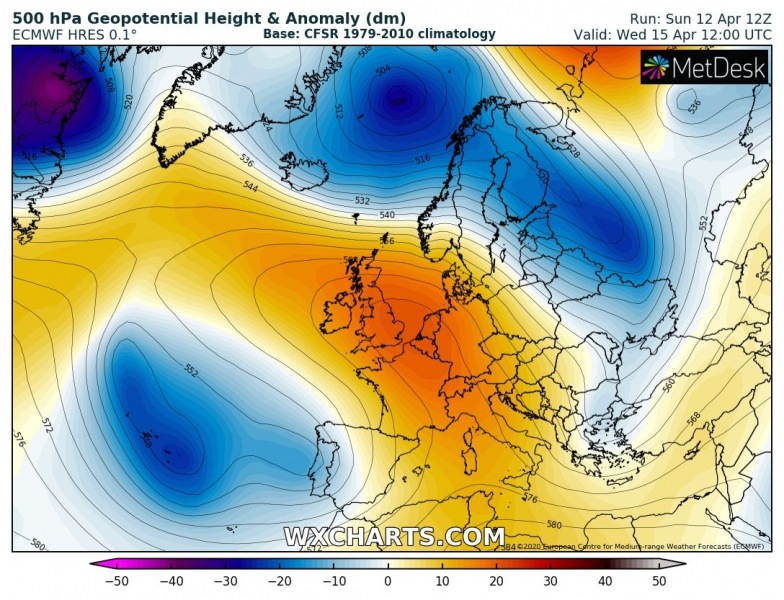 The cold pool spreading across the European continent is nicely visible on the 850 mbar temperature anomaly maps. It has already started across northern Europe this night and is now spreading south across western and towards central Europe. The cold will reach the Balkan peninsula tonight and continue across the whole peninsula on Wednesday while decaying across the southeast Europe. Much warmer weather returns into western Europe through mid-week. 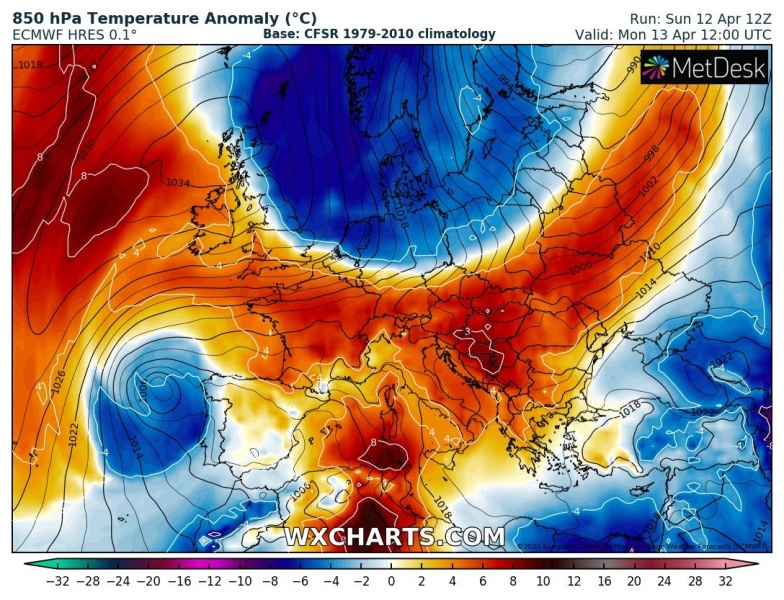 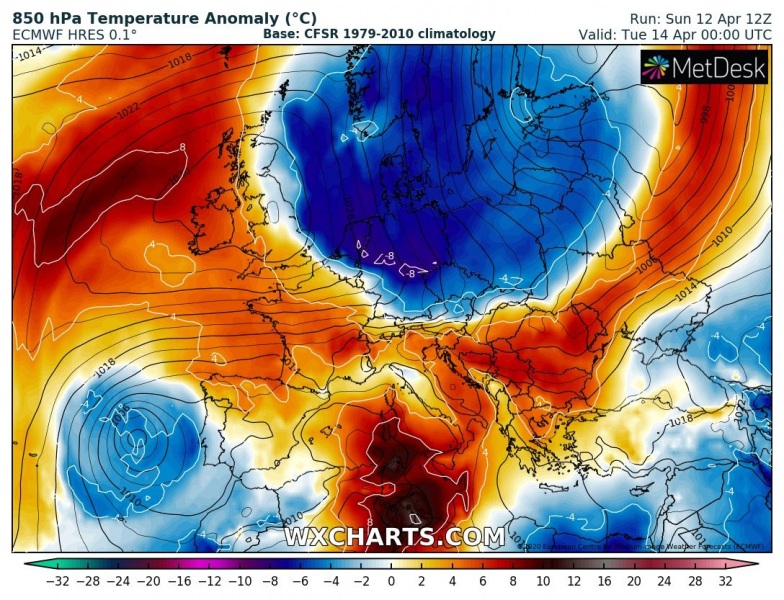 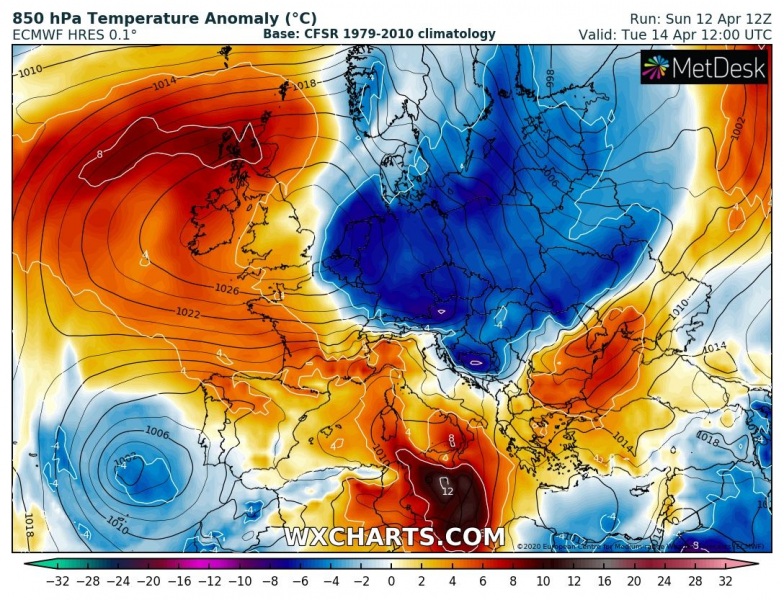 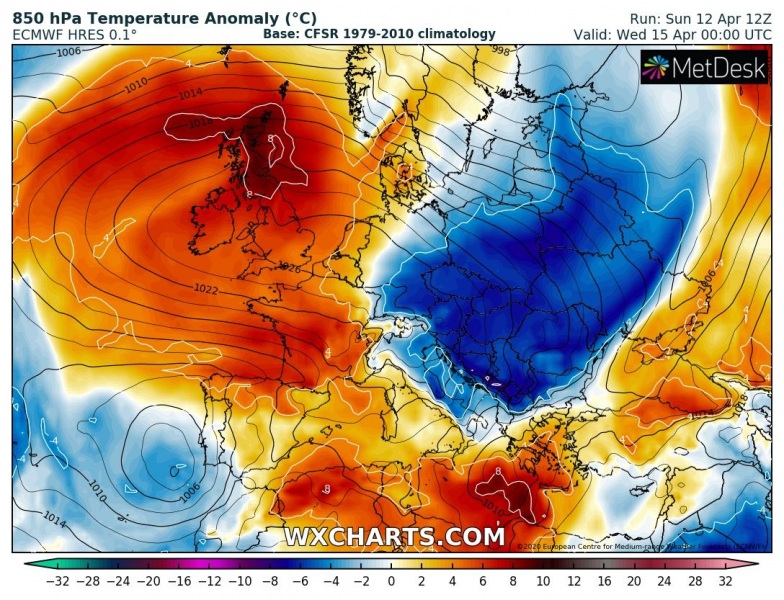 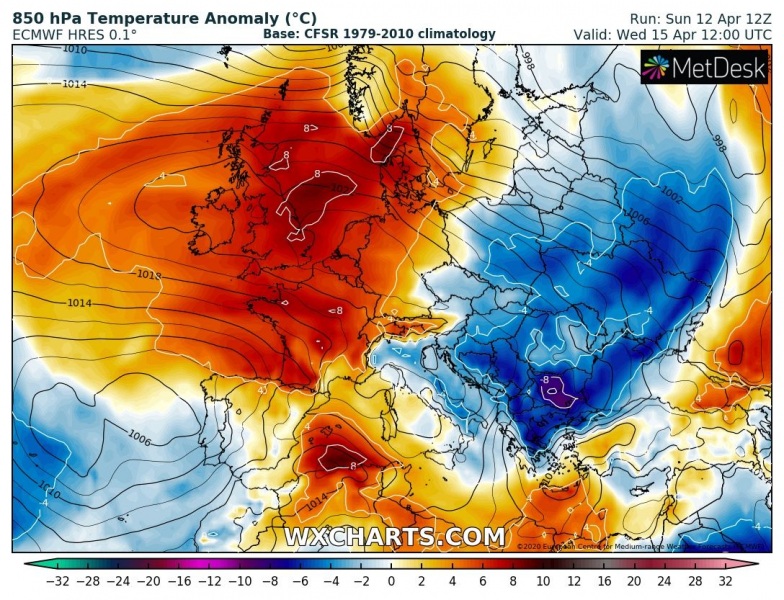 The cold pool will result in very cold mid-April night, likely again bring frosty mornings into west-central Europe. It becomes dangerous for the damaging frost after the very warm period this past week, so blossoming trees are underway now. Some regions could push close to -3 to -5 °C! Here are the maps for Tuesday and Wednesday morning: 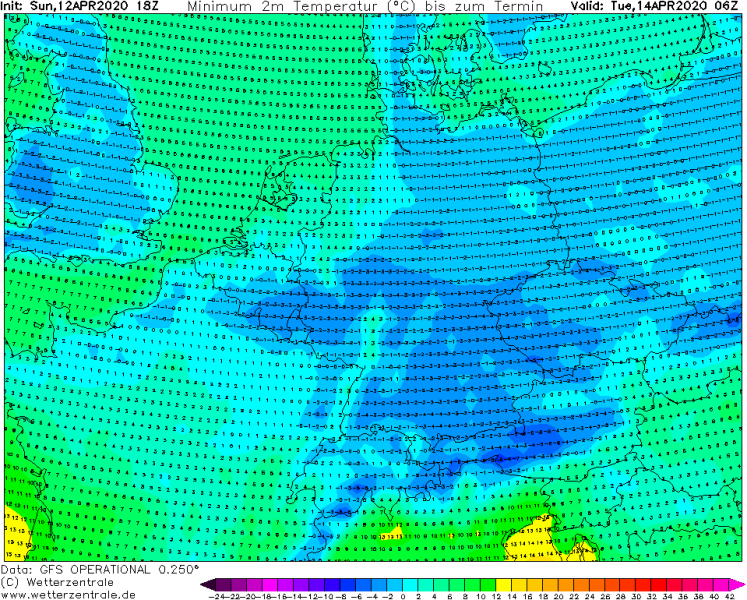 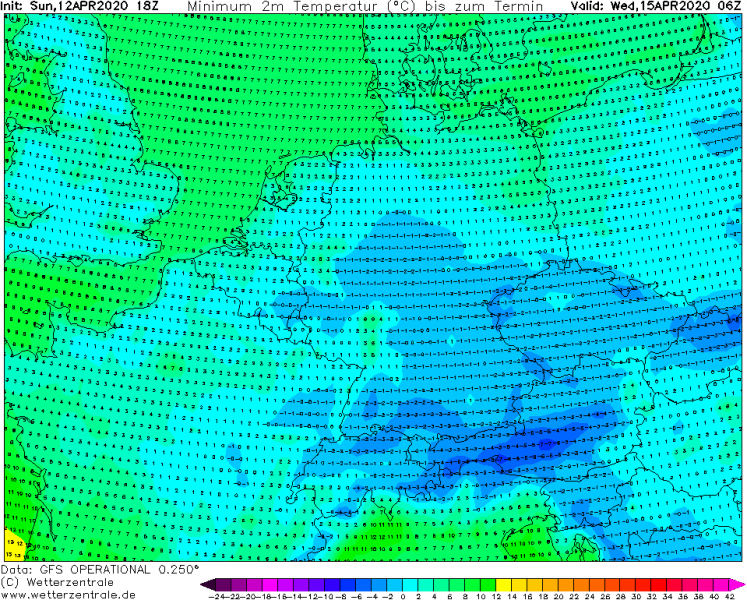 These are the potential morning temperatures across Southern Europe – forecast maps for Wednesday and Thursday morning. It could be devastating for the crops across parts of the Balkans as temperatures will push well below zero there as well again! 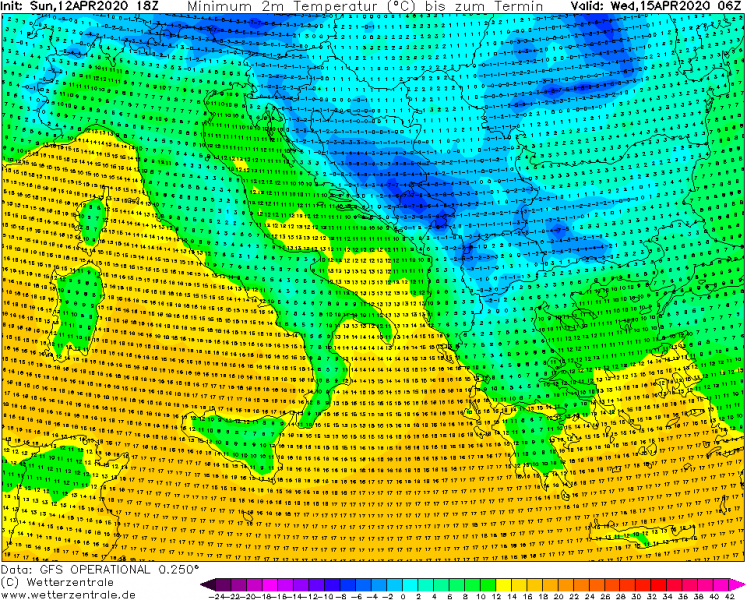 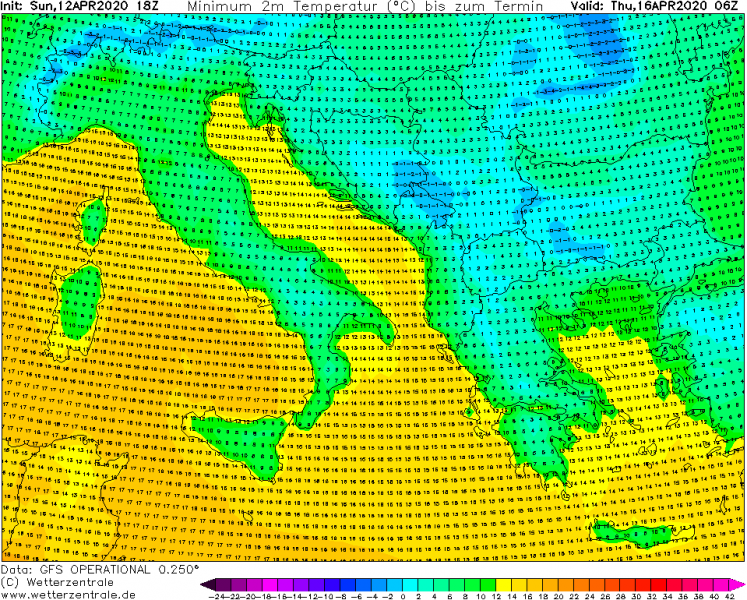 With the quite rapidly moving cold front and northerly moisture advection across the Balkans, some fresh snow seems likely to occur across the western part of the peninsula, locally 10-20 cm is possible. Note that this will help the temperatures go even lower in the clear nights that will follow: 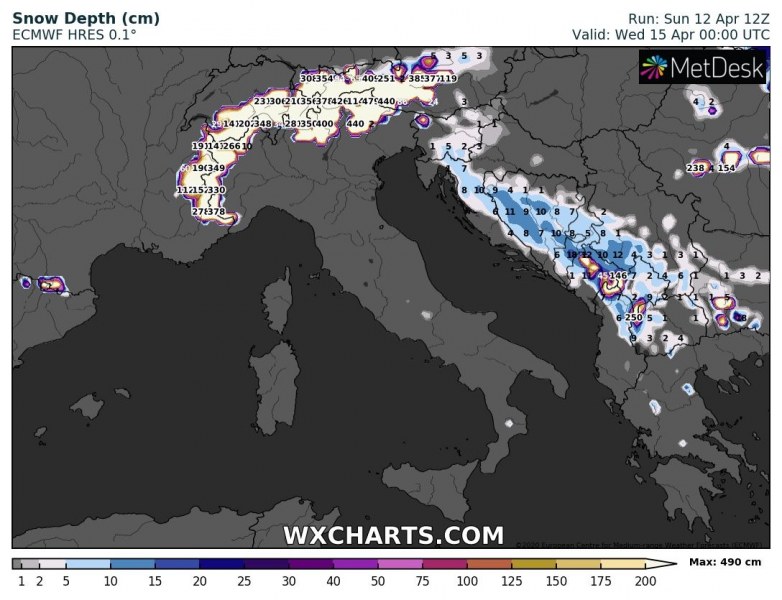 Stay alert for damaging frost with the vulnerable plants! Warmer weather will return after mid-week.

Meanwhile in the United States – intense Arctic outbreak is underway: