With mass national lockdowns in place across the globe, the coronavirus pandemic is having a major impact on air pollution over the continents, and indeed the air quality improvement. New data from Sentinel5P satellite reveal a sharp decline in Nitrogen dioxide (NO2) concentrations over the United States and European countries – France, Italy, Iberian peninsula and Germany.

Nitrogen dioxide (NO2), primarily emitted from burning fossil fuels for transportation and electricity generation (industry), can be used as an indicator of changes in human activity.

Here is the overview of NO2 changes across the European continent and the United States, comparing March 2019 and 2020. Although there is still a lot of pollution in Europe, the improvement is still obvious enough: 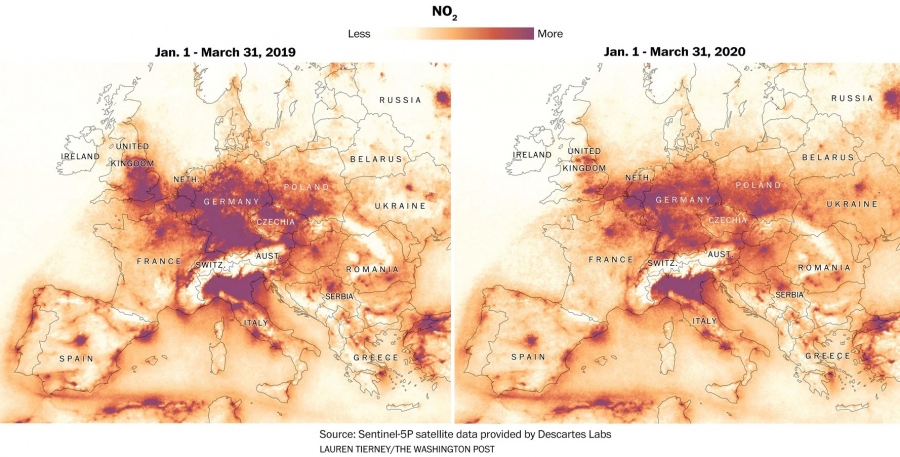 Similar over the Iberian peninsula, especially Spain which was badly affected by the coronavirus spread where authorities made a robust lockdown of major cities. The difference is pretty obvious in the capital Madrid and the city of Barcelona. A decline in NO2 concentrations is also noticeable in Portuguese cities Lisbon and Porto, as well as Spanish cities Sevilla and Granada. Notice there is less change in the capital of Algeria – Algiers since the city is not in the lockdown.

The refreshed data over Italy are truly impressive. That’s more than 50% decline in NO2 concentrations over Milan and Bergamo (Lombardy region) – the most affected region with coronavirus. A noticeable decline also over capital Rome, Naples and indeed the whole Po valley in the northern parts of the country:

These high-resolution data indicate that the NO2 concentration levels across the northeast United States in March 2020 are around 30% lower on average when compared to the March mean of 2015-2019 years.

In California, the shutdown of businesses and activities related to #COVID19 has led to a decrease in nitrogen dioxide concentration. Researchers with @NASA_SPoRT used data from @ESA_EO’s Sentinel-5P satellite to track concentrations of NO2.https://t.co/LFXzRs6UT1 pic.twitter.com/yJLgbcUClz

Meanwhile in India… significantly lower values of air pollutants brings a rare sight – the Himalayas visible from the plains of northern India and Pakistan:

See also our previous updates on the nitrogen dioxide concentrations in China, Italy and India: