In the main article about the global weather dynamics across North America, the North Atlantic, and Europe we have seen that both continents are forecast to see more wintery weather around Christmas.

The following forecast discussion below gives you an in-depth detailed overview of the White Christmas potential this year, so a probability of a snow cover on the ground for Christmas Day 2020 (Friday, Dec 25th) over the United States. 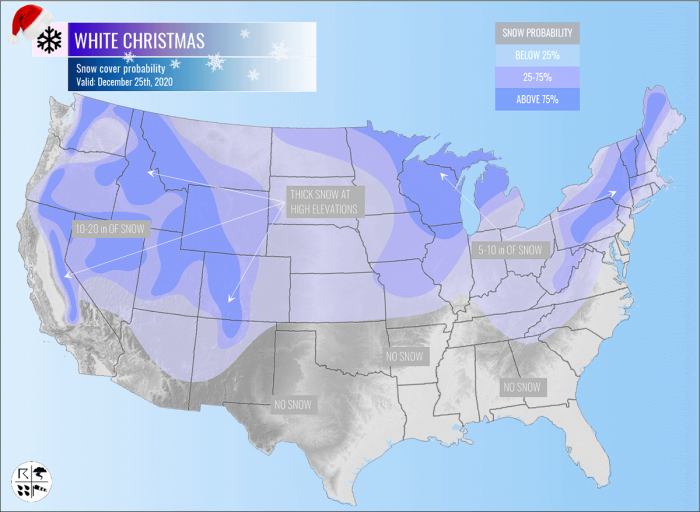 The weather model guidance has been consistent over the last few days and a massive outbreak of Arctic cold air mass is expected. Right for the Christmas into the East Coast and the Northeast United States.

The Arctic blast will release a major winter storm, with also lots of snow in store for the days around Christmas this year.

While not the whole country should be affected by this winter storm, the current snow coverage over the States does suggest that a good part of the United States should experience White Christmas.

In addition to the Arctic blast, there will be also very heavy rain and some severe weather potential along the Arctic front moving across the Southeast and the Mid-Atlantic coast.

Now, let’s see how the cold outbreak in the eastern United States evolves around holidays this year.

The dynamic patterns across the Northern Hemisphere often lead to the flipped weather patterns over the North American and European continents. This Christmas week, a powerful Omega blocking ridge pattern develops over the North Atlantic, and both Europe and the United States experience cold outbreaks.

We have prepared a video animation below, indicating the pattern evolution developing a massive Arctic blast into the eastern half of the United States, bringing another major winter storm into the Great Lakes and the Northeast, and the intense front into the East Coast for Christmas.

The video includes the 500 mbar heights, 850 mbar, and 2 m temperature, as well as the precipitation charts with the focus on the well-defined, intense cold front, which is racing towards the East Coast.

The general weather pattern evolution across the North American continent this Christmas week is a typical positive phase of the Pacific/North American teleconnection pattern (PNA). It also well correlates with a strong La Nina circulation this winter.

This (positive phase) means that an upper ridge is dominating the western part of the North American continent, allowing intrusions of deep Arctic trough on its eastern side. Precisely into eastern Canada and the eastern United States, the East Coast, and New England. 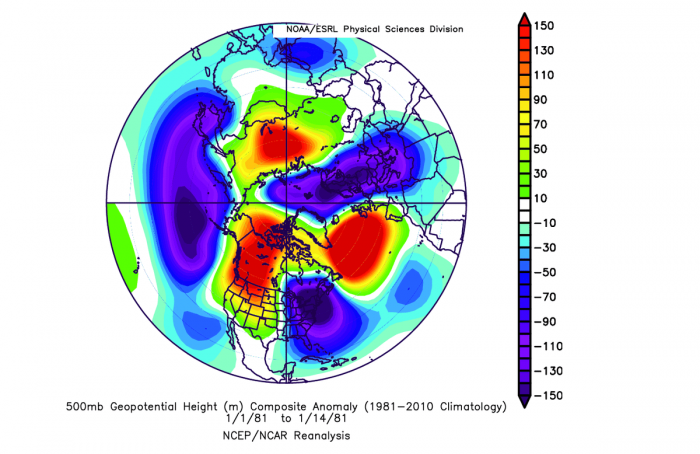 In the final days before Christmas Day this year, an Arctic outbreak with a dangerous winter storm is forecast to impact the East Coast, the Great Lakes, and the Northeast (New England) of the United States.

It will bring new snow and severe winds, but also severe weather with very intense rain along with the Arctic cold front racing across into the Southeast and the mid-Atlantic.

The pattern begins significantly changing from Tuesday into Wednesday with an upper trough deepening over southern Canada, drifting towards the Great Lakes.

This is the start of the Arctic blast arriving for Christmas.

On the pre-Christmas day, Thursday, a deep trough continues deepening while moving towards the East Coast. A strong southerly flow establishes an impressive moisture advection towards the Mid-Atlantic Coast and New England, within the intensifying pressure gradient towards the large upper high over the Northwest Atlantic. 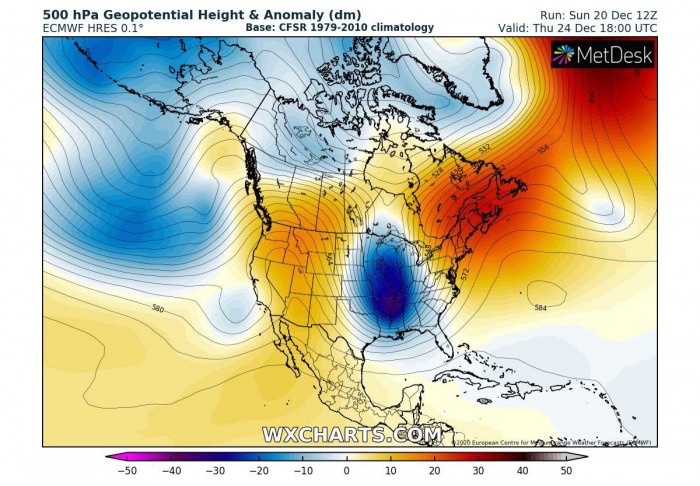 This aggressive pattern is best visible on the sea-level pressure forecast charts. A deep low sits along the East Coast, with a strong pressure gradient against the Northwest Atlantic High. 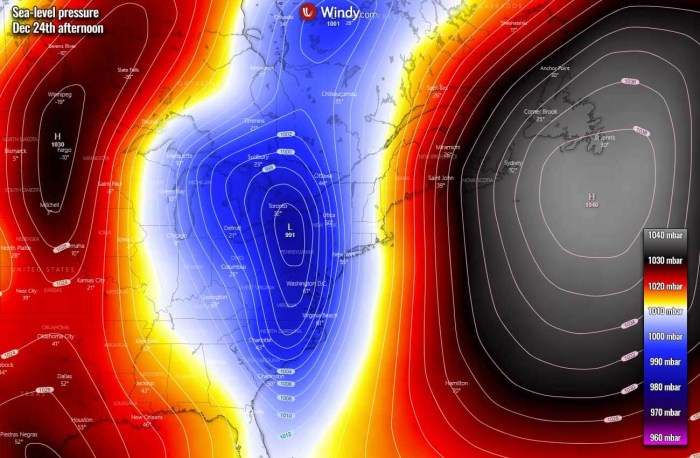 The Arctic blast begins strengthening across the central United States in the wake of the deepening depression over the East Coast. Much colder weather spread far towards the South, while a much warmer air mass remains over the Mid-Atlantic coast.

The Christmas evening will be rather cold across the central United States, but much warmer across the East Coast. It will be warm also across the West Coast. 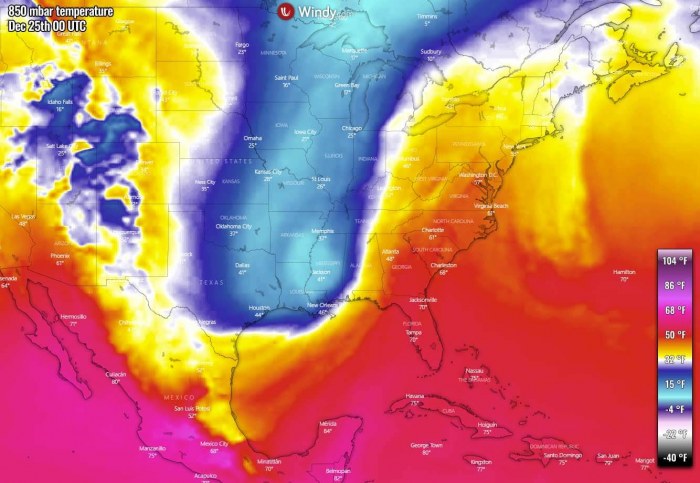 The associated surface Arctic front results in intense precipitation while racing east-northeast through Christmas evening. A powerful warm advection ahead of the front will introduce very heavy rain across the Southeast United States, gradually moving into the East Coast and the Mid-Atlantic overnight to Friday. 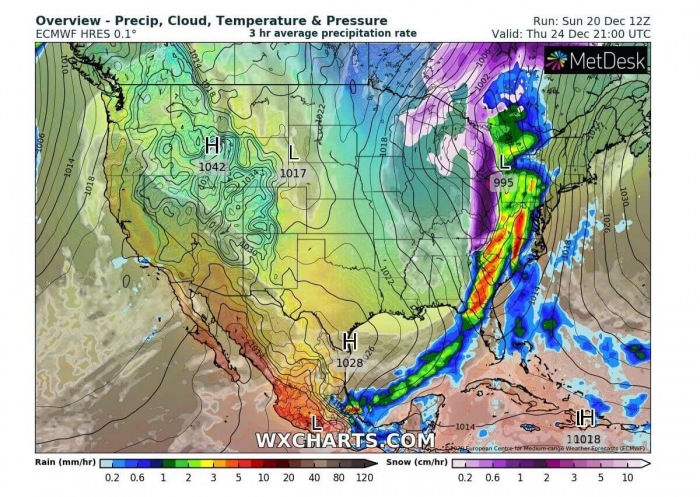 The rain will change into snow along and to the west of the moving front and heavy wet snow is expected at the beginning, then becoming dry with blizzard conditions through late Christmas evening.

The most intense snowfall will develop from the eastern Ohio Valley into Pennsylvania and West Virginia.

There is also some potential for sleet and freezing rain in the vicinity of the racing Arctic surface front. As there is a very warm air mass that remains into the mid-levels aloft, a much colder near-surface temperature will be advancing east quite rapidly and could locally be faster than the cooling aloft.

Therefore a narrow channel along the front could see some freezing rain potential. The below-freezing surface layer conditions could result while warmer temperatures remain above this layer.

But the event should have the window of opportunity for a rather short period, a few hours only.

On Christmas day morning, the deep upper trough peaks while entering the East Coast and the Northeast United States. An upper ridge strengthens across the country to its west. The trough remains very deep, supporting a massive Arctic cold advection into the East Coast.

The surface low under the deep upper trough intensifies further while moving onto the Great Lakes and the Northeast United States. An intense snowstorm develops over the region, combined with blizzard conditions given the impressive pressure gradient around the low. 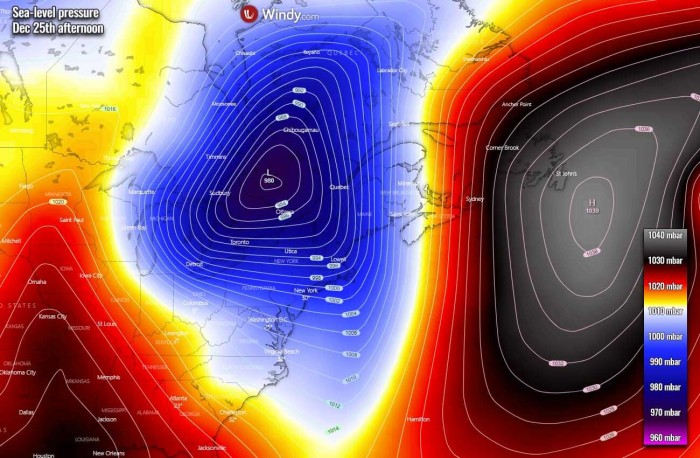 The peak of this Arctic outbreak for the Great Lakes and the East Coast happens right on Christmas day. Further east, warm advection is pushed into New England, Nova Scotia, and Newfoundland ahead of this deep low further west. 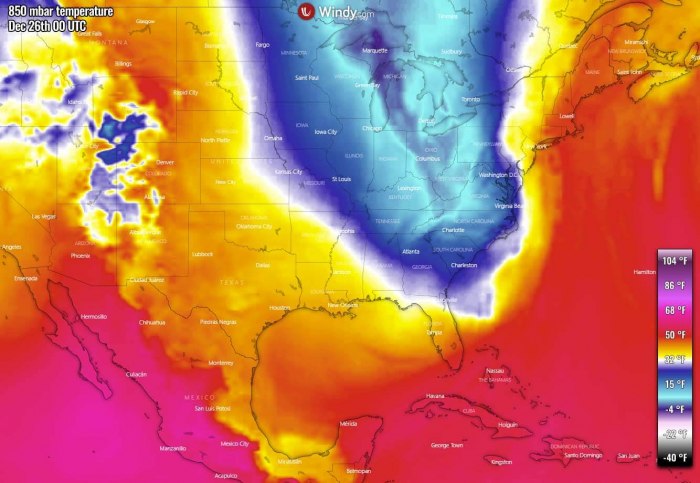 The surface cold front will be strongly organized, with intense rain blasting across the East Coast and the mid-Atlantic through the early Christmas morning. Very heavy rain will be accompanied by the front across New Jersey, Connecticut, Massachusetts, Vermont, and New Hampshire. 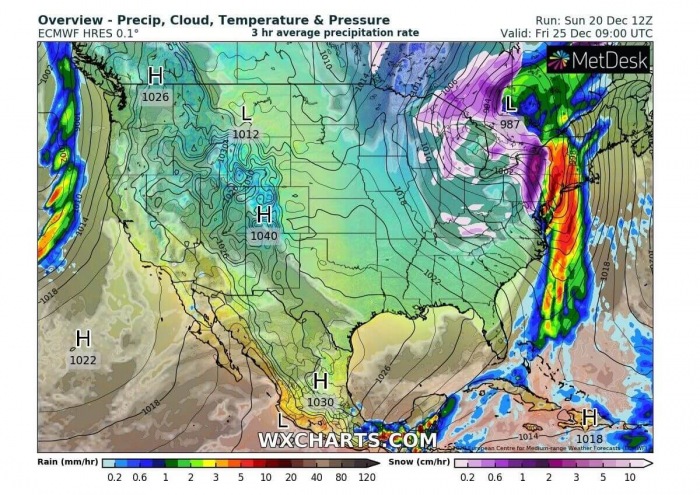 Behind the front further west, winter weather with heavy snow is forecast across the Great Lakes into the Ohio Valley as well. Very heavy snow seems likely across Pennsylvania and New York on Christmas morning.

Dangerous blizzard conditions are possible. Driving conditions for traffic flow will locally become difficult. Especially if sleet and freezing rain would mix along with the front as well.

So, it feels like proper winter weather is expected for Christmas day for some!

Severe winds along the Mid-Atlantic coast could locally result in some coastal flooding as well.

Now, let’s take a look over the weather forecast with the potential of a white Christmas day across the United States this year.

Most of us were probably dreaming of a white Christmas when we were young, right? Certainly, snow is something special for Christmas evening and the morning after.

As per NOAA, a definition for a White Christmas is when there is at least 1 inch (2.54 cm) of measured snow depth on the ground on Christmas morning.

Historically speaking, the highest chances for snow covering the ground are Minnesota, Maine, Upstate New York, the Appalachians, Idaho, the Rockies, or the Sierra Nevada Mountains. These are typical states with the best chance of a White Christmas. 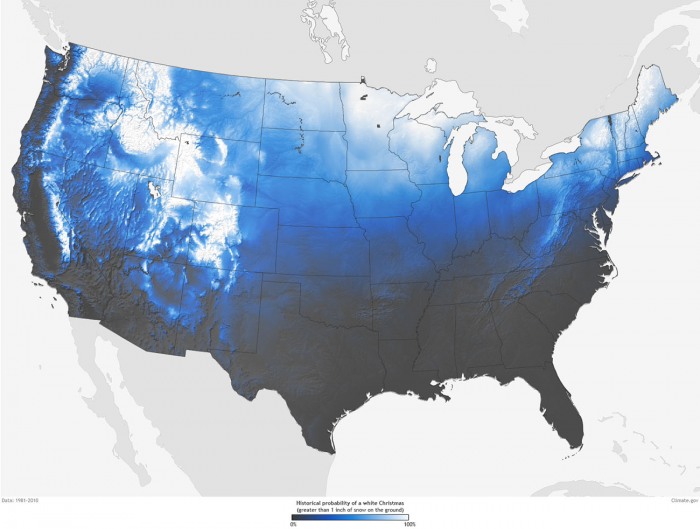 The map above is provided by NOAA

Now, let’s take a look over the weather forecast and odds of a White Christmas across the United States. Further below is our own product – a traditional White Christmas Outlook best forecast for the snow coverage over the country.

The snow coverage for Christmas day across the United States looks like it will follow the historical probabilities this year. The best chances are seen over the northern half of the country, while there are barely any chances for a white Christmas across the South.

Here is our outlook with the probability of White Christmas 2020:

It definitely looks like the last-minute winter storm forecast to hit the East Coast on Christmas will bring higher odds. This will help the northeastern part of the United States to get White Christmas this year.

What appears likely is a massive winter storm with fresh snow from the Ohio valley further into the Northeast US. 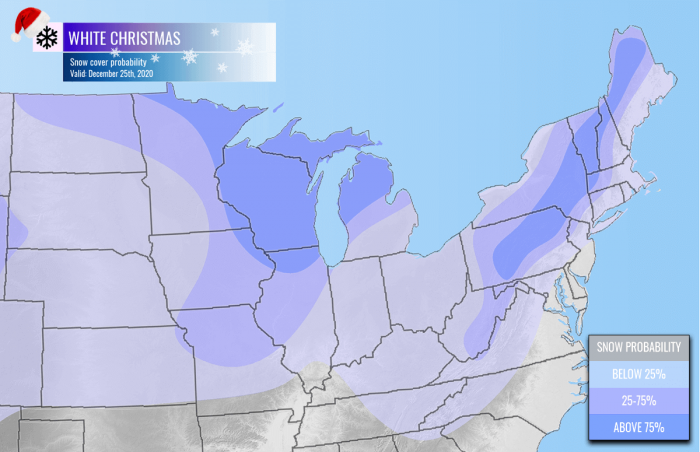 Parts of the Midwest, the Great Lakes, and the Northeast United States will likely see a white Christmas, thanks to this snowstorm.

But some areas along the Mid-Atlantic coast might even lose the snow coverage due to significant melting of the existing snow, as a much warmer air mass arrives ahead of the system.

Looking over the snow depth forecast on Christmas Day in the region, there is some minor snow coverage from Wisconsin into Illinois and Indiana towards Ohio and Kentucky.

Christmas morning could also see a few inches of snow across New England. A deeper snowpack is further north in Canada. 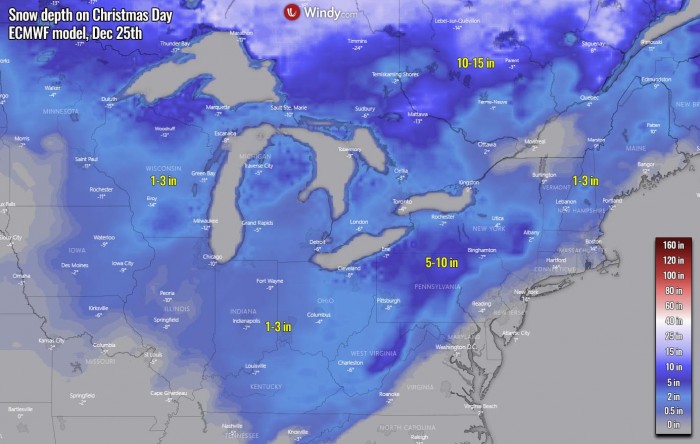 The snowpack seems to remain or even improve further west and north.

White Christmas across the northwestern parts of the country will be mainly confined to the deep snowpacks over the mountains, the Rockies are covered in deep snow. 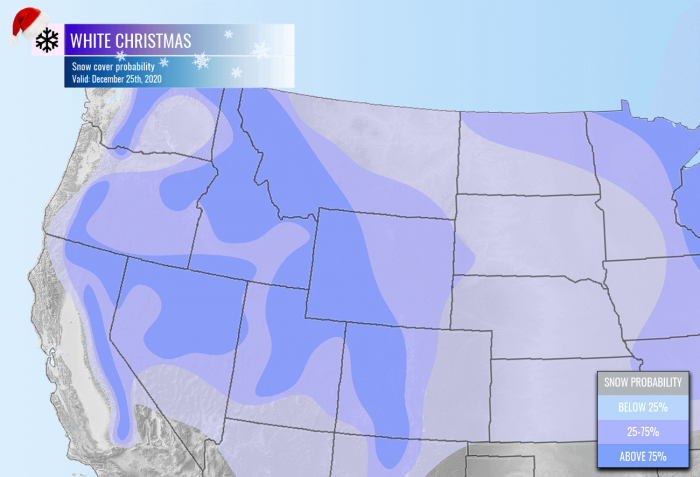 The higher mountains of the Pacific Northwest are getting pounded with remnants of deep North Pacific extratropical lows and winter storms lately, so a very deep snowpack is present.

In addition, there is also some fresh snow coming across this part of the country as the rear side of the new system travels across the region in the days before Christmas as well.

Looking over the snow depth forecast on Christmas Day in the region, we can see how deep the snowpack is over the mountain ranges. Up to 60+ inches over the Pacific Northwest mountains, 15-30 inches over the central Rockies in Colorado.

And 20-40 inches over the northern Rockies in Wyoming, Idaho, and Montana.