We are entering the Christmas week and here is our traditional White Christmas outlook potential for snow coverage across Europe. The new week brings a pattern change into our continent, so winter weather is forecast to develop in some parts. Here is what we know so far and which parts of Europe are likely to see a White Christmas this year.

In the main article about the global weather dynamics across Europe, the North Atlantic, and North America we have seen that both continents are forecast to see more wintery weather around Christmas.

In this discussion now, we are providing you a more detailed overview of the White Christmas potential this year, so a probability of a snow cover on the ground for Christmas Day 2020 (Friday, Dec 25th) over Europe. 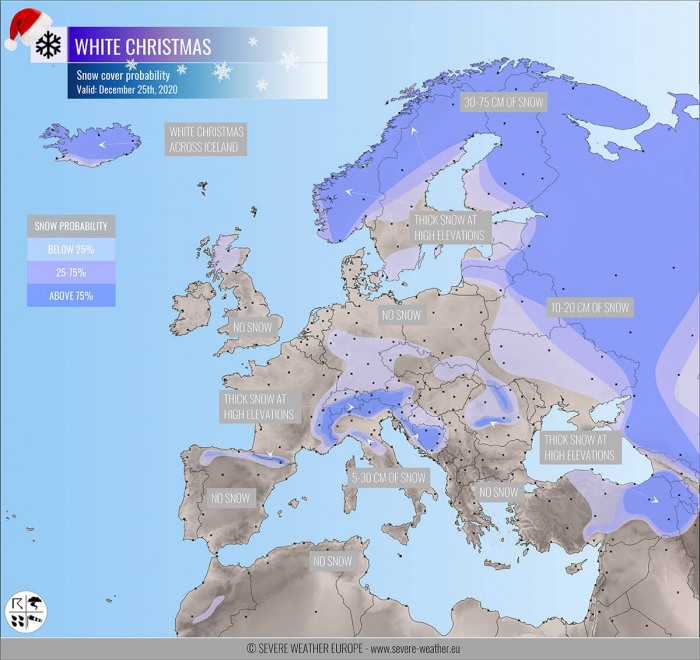 The ongoing pattern over Europe flips for this Christmas week, becoming more progressive with potentially winter weather developing into central Europe and the Balkans.

The North Atlantic goes from a deep trough into a strong blocking high in the final days before Christmas and establish an open channel for cold advection from the Arctic region towards the deep south.

Besides the White Christmas potential, we discuss the background evolution of the overall weather pattern for Christmas Day this year.

Keep in mind that soon after Christmas, the pattern enters a more progressive mode and there is an increasing potential that a very powerful upper ridge completely blocks the North Atlantic, and a deep trough develops to its east over the European continent. In other words, this means a higher potential for winter weather is forecast.

Below is the animation of the 10-day pattern evolution:

But before that, on the pre-Christmas Day, the cold front associated with the week’s pattern change will become better defined when arriving in central Europe, therefore introducing heavy precipitation. Heavy snow will develop over the Alps through Christmas evening. And snow will also follow for these parts of Europe through Christmas Day.

Let’s see how this pattern over Europe actually pans out this year.

A powerful surface high-pressure system develops over the North Atlantic and western Europe, allowing the cold air mass on its eastern flank to move further south towards central Europe and into the Mediterranean, the Balkan peninsula, and towards Iberia. 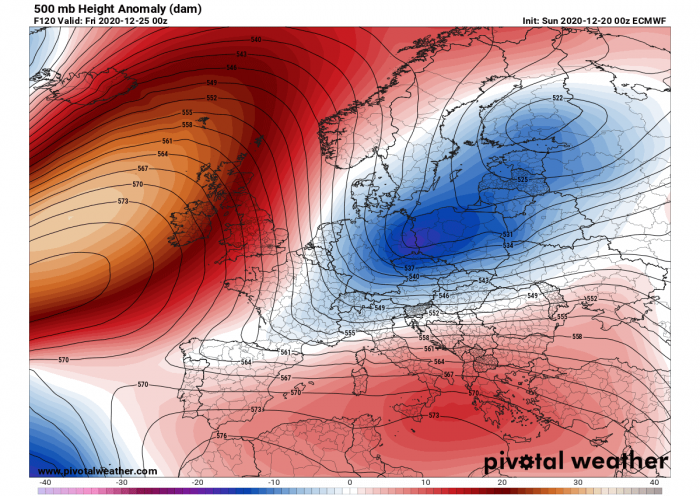 Then, a secondary surface low forms over the northern Mediterranean and results in an additional advection of warm air mass towards the moving cold front from the Alps, introducing snowfall into the western Balkan peninsula. Right for Christmas Day (Friday) and further through Saturday. 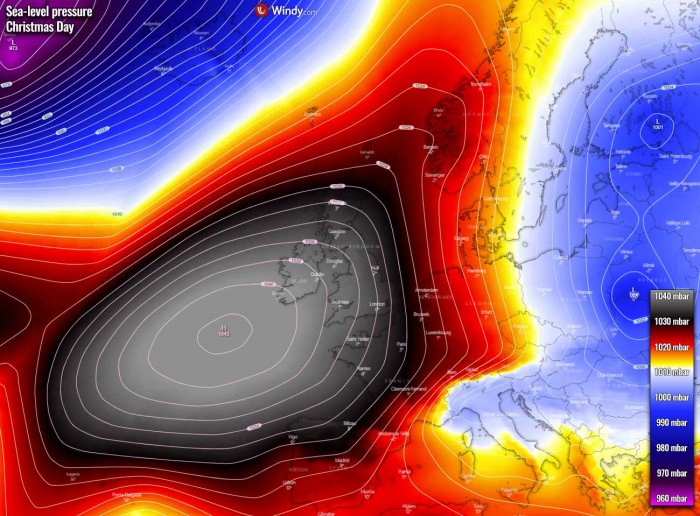 So the High to the west helps the much colder air mass to push temperatures below freezing further south, and winter weather is forecast to develop in parts of central Europe.

But indeed a large part of Europe will see cooler weather then, following the more northerly prevailing flow over our continent. Thanks to the large blocking High to the west of Europe.

On Christmas Day, heavy rain will change to heavy snow across the northern Balkans, including Slovenia and Croatia. Significant amounts of snow will locally be possible, combined with strong Bora winds and blizzard conditions.

How much snow it can accumulate remain a bit uncertain, as both global models ECMWF and the GFS are not in full agreement yet. But there is definitely an increasing potential it will be snowing for Christmas in these areas this year.

With just a brief looking over the map below, we can quickly see a white Christmas across Europe is actually a quite rare event. If you are a younger reader, you’d say “Christmas has been without snow for years now”. Indeed, it has, unfortunately, become an exception over the last decade. 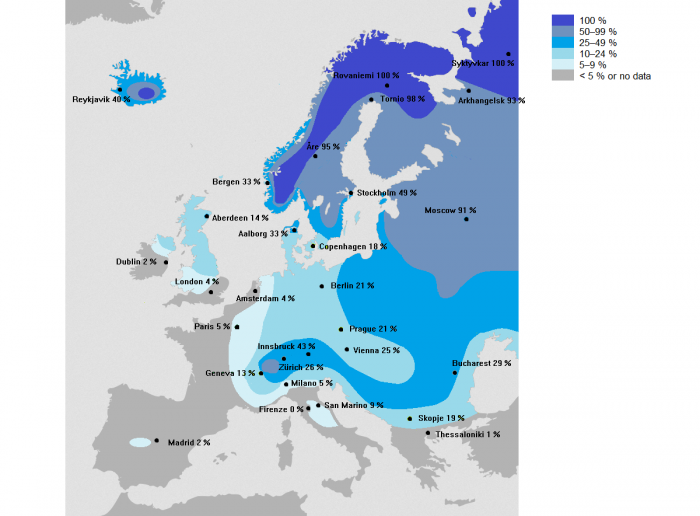 The map above was created by Reddit user Haayoaie

But historically speaking and based on the statistic probabilities, most of Europe actually has a very low chance to see snow on Christmas day.

As we can see from the map above, only around 5-10 % of Europeans live in an area where Christmas has snow on the ground. Typically that is only over Scandinavia or more precisely, over the Lapland (that area is covering northern Norway, Sweden, and Finland).

If we just think of those white Christmas cards, they are always pictured as snowy.

Unfortunately, in other parts of Europe like England, France, Germany, the Balkan peninsula… the chances for white Christmas are statistically very poor there.

For example over the UK, the last widespread white Christmas was in 2010. It actually was an extremely unusual event, as not only the snow on the ground was reported at 83 percent of the official weather stations network, but the mix of snow or sleet also fell at 19 % of those stations. This was the highest amount of stations ever recorded snow on a single day in the UK.

One interesting thing to note from the map, have a look over central Spain (Madrid area) and Dublin (Ireland). Dublin is located quite far north of Madrid (Spain), but the chances for snow covering the ground on a Christmas day are minimal, only 2 % for both areas.

Now, let’s take a look over the weather forecast for the potential of a white Christmas day for this winter 2020/2021 across Europe…

Overall, the snow coverage situation across the European continent is forecast to improve as winter weather is likely to arrive later this week. The general pattern over Europe and the North Atlantic will bring the weather change sometime around Christmas day.

Here is a Severe Weather Europe outlook with the probability of white Christmas 2020:

Actually, the situation for Christmas Day this year is not too impressive, as we can see. The snow is mainly limited to the mountain ranges and far northern Europe. Especially over Scandinavia and Iceland.

Central Europe and the Alps

First, we take a closer look over the snow coverage forecast across central Europe and the Alps. The highest probabilities are indeed over the Alps as deep snow has accumulated over the past weeks.

So the snow depth will remain also in the holidays as it usually happens there. 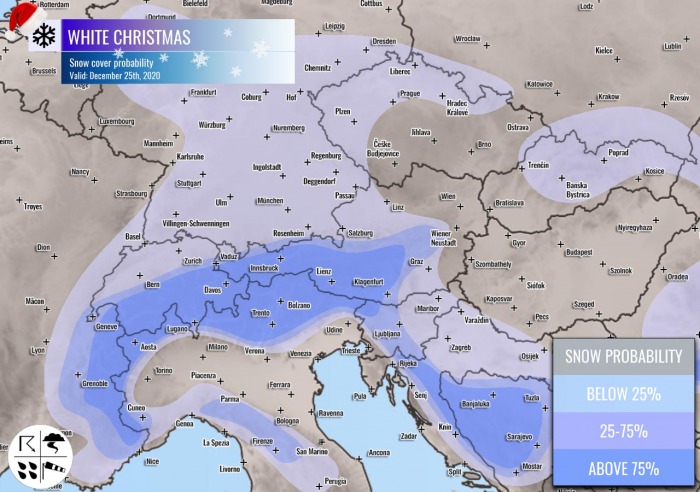 Although the weather pattern forecast across Europe still has some uncertainties next week, there is winter weather possible to develop across parts of central Europe, also into the lowlands.

That is especially in focus across parts of Germany, Austria, and Czechia. Possibly also in Slovenia and Croatia as weather models forecast there are rising chances for an intense winter storm to develop right on Christmas day.

Looking over the potential snow depth on Christmas Day in the region, we can see that a significant snow depth is over the Alps. 20-40 cm could be on the ground in the western Balkan’s higher terrain.

But also some snow to the north of the Alps, e.g. Germany, Czechia, Slovakia, and Poland. 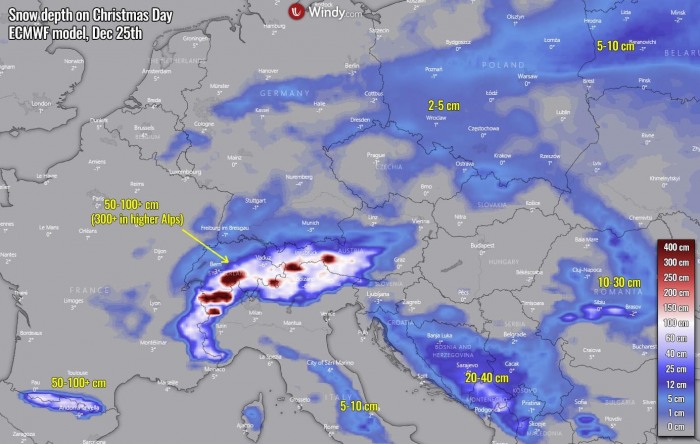 Quite high snowfall accumulations could develop over the northern Dynaric mountain range across the western Balkan peninsula.

Scandinavia and the Baltic region

Most of Scandinavia, excluding southern Sweden, Denmark, and the coastal areas of the Baltic Sea region, is likely to see decent snow coverage.

Indeed the most across the higher terrain of western Scandinavia, there 30-60 cm of snow depth is likely, even more (a few meters) in southwestern Norway where extreme snow depth is typical for La Nina winter months. 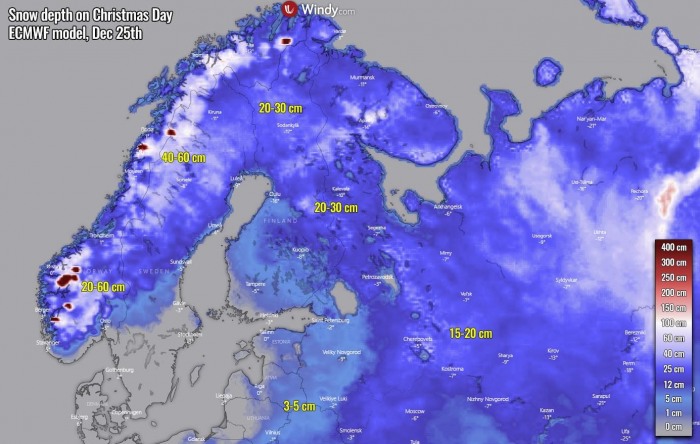 A couple of cm of fresh snow seems possible over the Baltic countries, also southern Finland. More further east towards Russia and Belarus.

Looking over southwestern Europe and the Iberian peninsula, the snow coverage on Christmas day will remain over the higher terrain of the Pyrenees and the Cantabrian mountain range. 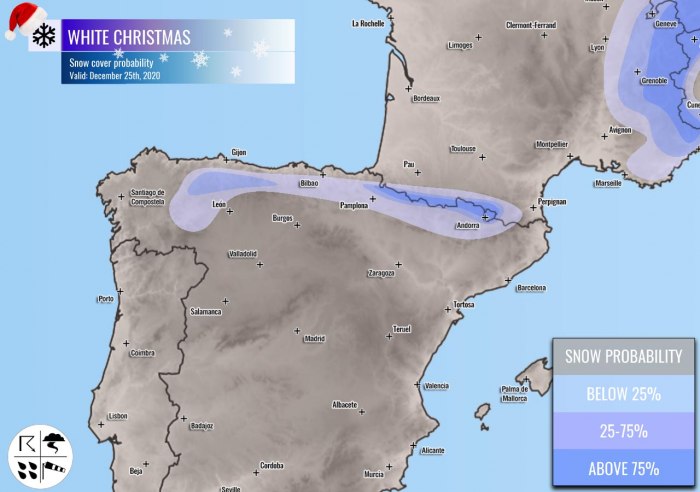 Depending on the progress of the pattern transition into more winter weather around Christmas, it may bring some fresh snow in these areas, as well as across the higher terrain between both mountain chains.

There seem to be rather low chances for a white Christmas across UK and Ireland this year. The weather models do, however, forecast some low potential for the northwestern UK and over Scotland. But it seems the chances are reasonable only over Scotland. 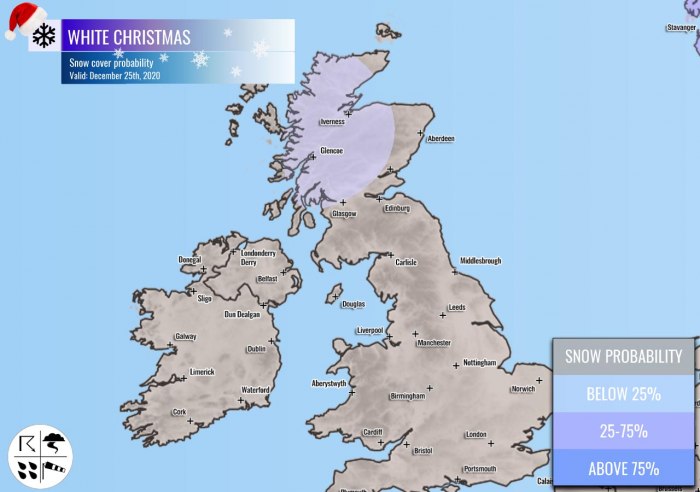 There does not seem that any snow is likely to be on the ground for Christmas over Northern Ireland, Ireland, Wales, and south-central England.

The Balkan peninsula and Turkey

The Balkan peninsula will have two areas where white Christmas is possible this year. One is the western part of the peninsula, where fresh snow seems possible on Christmas day as we’ve discussed earlier. 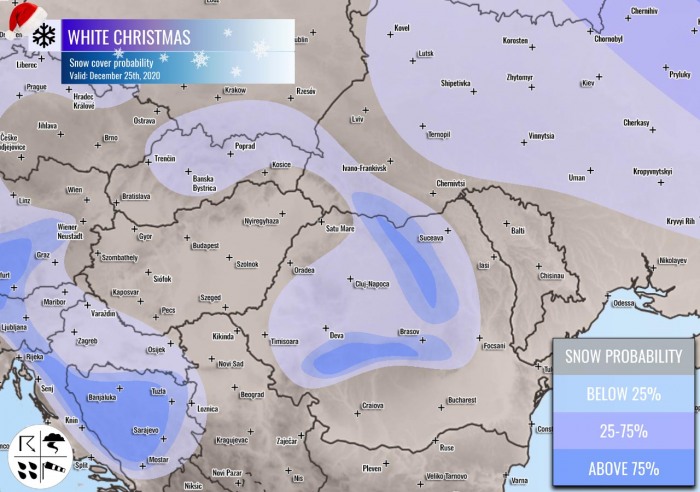 While the other area is the Carpathian mountains. Those are already covered in snow, so the snow depth will also remain for Christmas. Some snow coverage will remain over the High Tatras, between Slovakia and Poland.

Also over the eastern half of Turkey and Georgia as winter weather is forecast to bring quite some fresh snow in the pre-Christmas days this coming week. High snow depth is expected in the higher elevation of eastern Turkey. 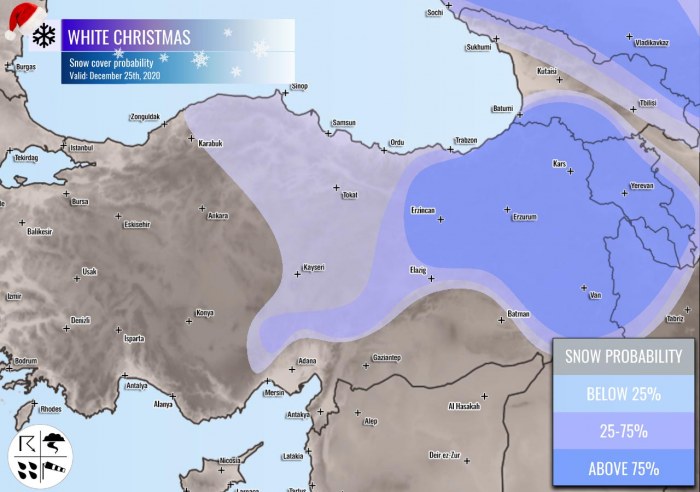 Looking over the potential snow depth on Christmas Day in the region, we can see that there could be 5-10 cm of snow over central and northern Turkey, much more further east. 20 cm to more than 50 cm of snow depth seems likely on Dec 25th. 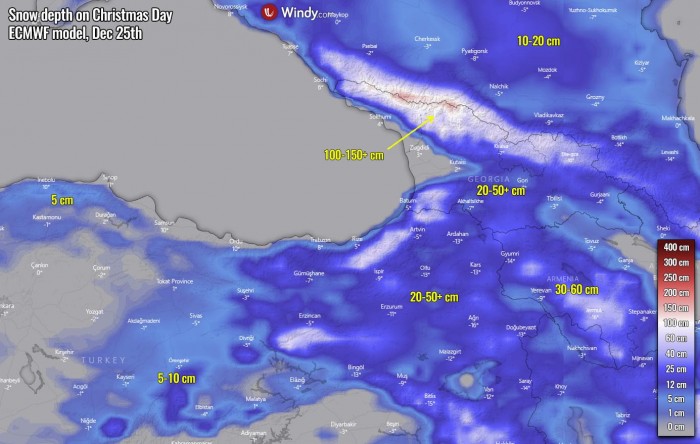 Indeed more snow is expected over the higher terrain. Deep snow depth is also spread across the Greater Caucasus mountain chain, with a significant amount of snow in the highest mountains. Likely 100-200 cm in some areas.

WHAT ABOUT SNOW AFTER CHRISTMAS?

Let’s take a look over the period after Christmas, as it seems that a significant pattern change coming up this week will also open a more dynamic, progressive pattern over Europe towards the end of December.

Attached below is the 10-day ECMWF model forecast for snow accumulation across Europe. The model guidance suggests that the weather change might finally introduce more winter weather across our continent soon after Christmas. 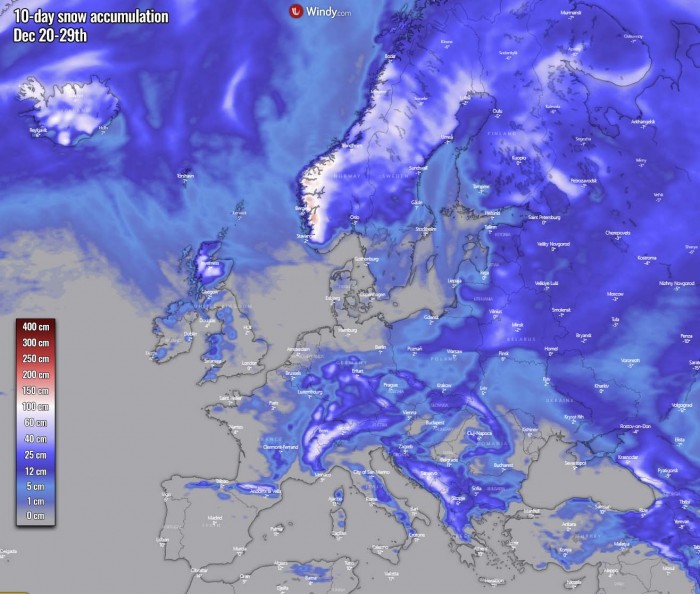 There is quite some snow forecast for central Europe and surroundings, over eastern France, Germany, Czechia, and Slovakia. Including the Balkan peninsula countries like Slovenia, Croatia, Bosnia, and Serbia. Even further south into North Macedonia, Bulgaria, and northern Greece.

Lots of new snow is likely also across eastern Turkey, Georgia, and Armenia as cold fronts push into the region in the coming days.

Some fresh snow could also occur along the Apennines in Italy, and indeed across the north and northwest parts of the Italian Alps.

Hints of snow are also visible across Ireland and the UK, but still mostly in Scotland only.

The Baltic region could also see some fresh snow after Christmas, also Poland, Belarus, and Ukraine.

Not to mention Scandinavia, the large depression forecast over northern Europe will definitely support lots of snowing over Norway, Sweden, and Finland in the coming 10 days.

Iceland should also see more snow, especially the Highlands and the northern parts due to prevailing northerly flow developing with the pattern change this Christmas week.