The two biggest solar system planets, Jupiter and Saturn, are very close together tonight. Actually, the last time they were as close together, it was almost 400 years ago! And their next super-close pairing will happen in about 60 years. But tonight, it will be the Great Conjunction of two planets, not close to the merging or shining like a single Christmas Star you might have read around.

Another spectacular celestial show will happen tonight, Dec 21st. The first day of the astronomical winter 2020/21 (solstice). It’s been almost 400 years since the Great Conjunction of the giants in our system, planets Jupiter and Saturn. That has happened during the daytime and close to the Sun, so it was hard to find it in the sky.

So the closest similar night time event of the close conjunction of the two giants is nearly 800 years ago. The last time most of the world’s population had a favorable view of these two giants, was on March 5th back in 1226. They were then even closer together (just 2 arc minutes apart), compared to what we will see tonight (0.1 degrees apart). 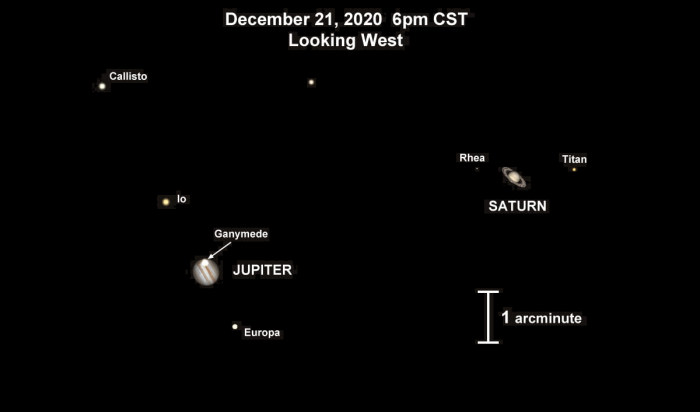 In 1226, the alignment of Saturn and Jupiter occurred at night, so it will be the same in 2020, allowing many around the world to witness this spectacular event. The next super-close pairing of Jupiter and Saturn will occur on March 15th, 2080.

But Jupiter has been ‘chasing’ the ringed planet Saturn for months and is now preparing to pass nearby. Can we catch them on the sky tonight? Here is the cloud coverage over Europe and the United States seen by the weather models:

Many news lately are calling this event the ‘Christmas Star’, but it is far from that. We will explain to you further down what Christmas Star actually is.

Nevertheless, such an event is pretty close to once in a lifetime. That’s for sure!

WHAT IS CHRISTMAS STAR

So long story short, hearing the ‘Christmas Star’ one would expect we will see a very bright star-like shining.

Jupiter and Saturn are planets, so not even a single star! They will not be close to any crossing or even merging into a single object, so there is no ‘touching’ between the two.

Bottom line, the Great Conjunction of Jupiter and Saturn might looks-like a single shining Christmas Star, but technically it isn’t.

However, there are a few explanations of the Christmas star in the past.

The largest of the two giants is planet Jupiter, also the brightest object after the Sun, Moon, and Venus in our night sky. It is the 5th planet from the Sun.

The planet Saturn is a bit smaller and also slightly dimmer than Jupiter, but also the 2nd largest in our planetary system. Saturn is nearly twice as far away as Jupiter.

Saturn is the sixth planet outward from the sun. Saturn takes almost 30 years to orbit (to go around) the sun, while Jupiter takes it 1.5 times less, about 12 years.

If you want it more technical…

Saturn’s period of 29.65 years multiplied by Jupiter’s period of 11.86 years amounts to 351.65. Dividing this value by the difference in their sidereal periods gives us 19.76 years.

Therefore, about every 20 years Jupiter catches up to Saturn as viewed from Earth. So actually, the ‘meeting event’ of the two giants is a regular event. But they are mostly not so close to each other plus the event happens outside of the night visibility from Earth and especially not close to Christmas time as this year.

The sky tonight will see very bright conjunction of the two planets, they will be ‘very’ close. Bu astronomically speaking that is still a huge distance.

Jupiter and Saturn will indeed appear very close to each other, but they are actually 456 million miles (734.000 million km) apart.

In astronomy, we use the word conjunction to describe the meetings of planets and other objects in the sky. The use of the term Great Conjunction has been known as the meeting of the giant planets Jupiter and Saturn, as they are the two biggest planets in our solar system.

But will you will have clear skies to observe the Great Conjunction of the giants? Here is a brief look over the cloud cover across the European and North American continents.

A very good observation conditions are expected across a large part of the United States tonight. It appears likely there will be mostly clear skies across the West, Midwest, and Southeast parts of the country. 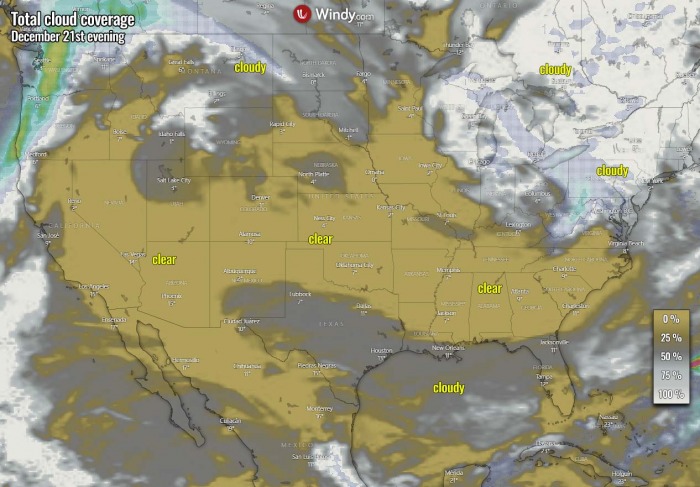 Cloudy conditions should limit viewing the Great Conjunction in Texas, parts of Florida, north and northwestern United States and the Great Lakes with Northeast.

Unfortunately, the ongoing still stable weather pattern with widespread low cloudiness will not permit so good observations across Europe. It looks like the best conditions are only over parts of southern Spain, possibly over the central Mediterranean, and maybe western Poland. 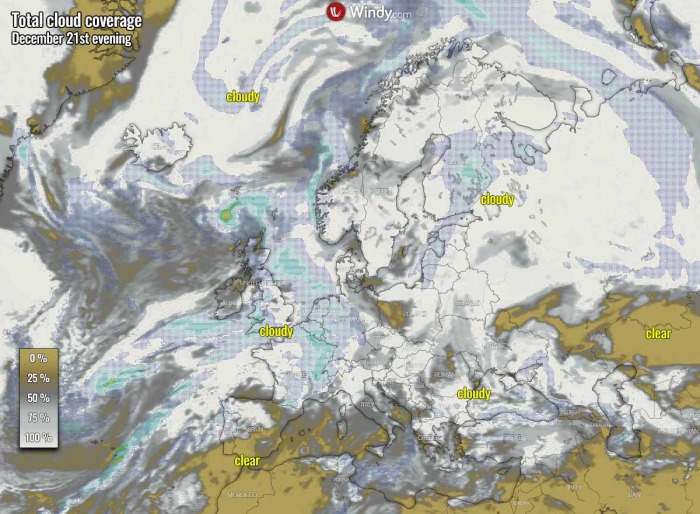 Other regions are very likely to experience cloudy skies with a lot of moisture and also precipitation.

HOW TO OBSERVE THE GREAT CONJUNCTION

Here is how to watch or photograph the Great Conjunction tonight, Dec 21st.

Find an open space like a field. Get yourself away from the city lights for the best observations to avoid light pollution. Although the Great Conjunction is an urban-friendly event, both are bright enough. Jupiter and Saturn are very bright planets, so they can be seen even from most cities around the world.

Look to the southwest above the horizon, at just after sunset. To locate the planets, scan for the brightest dot in the sky (normally we would write a ‘star’, but let’s avoid this quotation), that will be Jupiter. And the planet Saturn will be to its immediate left.

The planets will be fairly low on the horizon and bright, so you shouldn’t have much work to do. 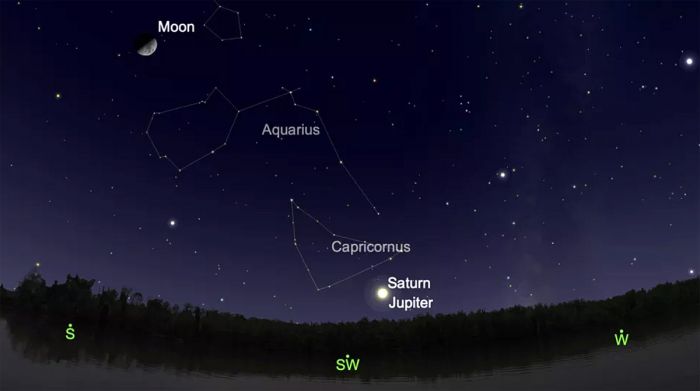 You could also use a small telescope or binoculars to see our giants in the sky and you should also be able to make out some of Jupiter’s moons along with the planets.

If you plan to photograph the event, you would require a 200 or 300 mm lens to capture a photograph of the planets and possibly Jupiter’s moons in the gathering darkness after sunset.

The two giant planets Jupiter and Saturn will have their Great Conjunction on Dec 21st, the day of the December solstice and the start of the astronomical winter. The giants will be visibly closer in our sky than they’ve been since 1226 (almost 800 years ago).

Tonight, Jupiter and Saturn will be only 0.1 degrees apart.

*ENJOY* your evening and observations of the two planets. And feel free to report your observations to our Facebook Report & Discuss group and if you catch some of them, we will be happy to share those with our readers!

Like the astronomers and astrophotographers would say – CLEAR SKIES!