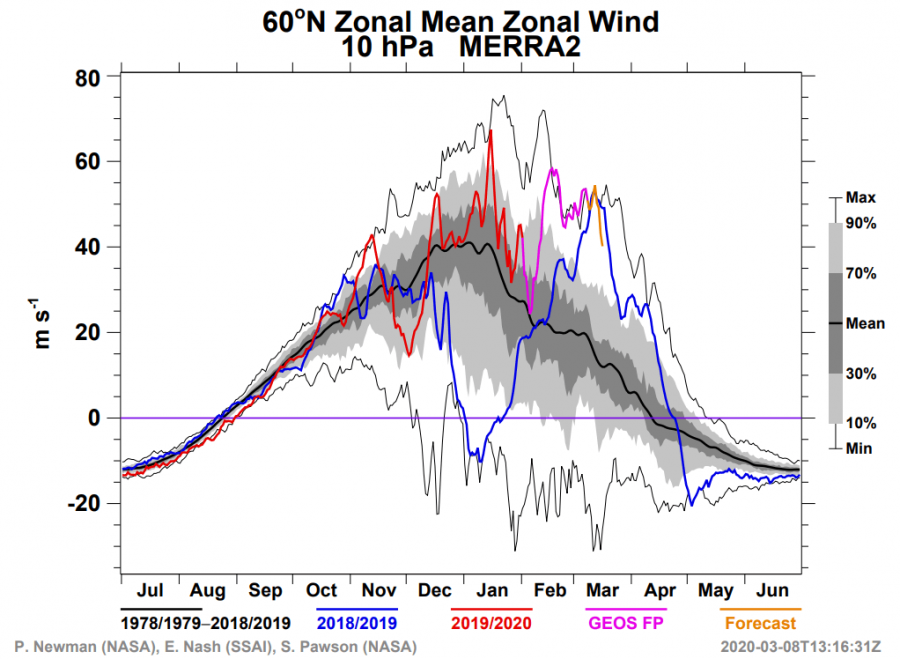 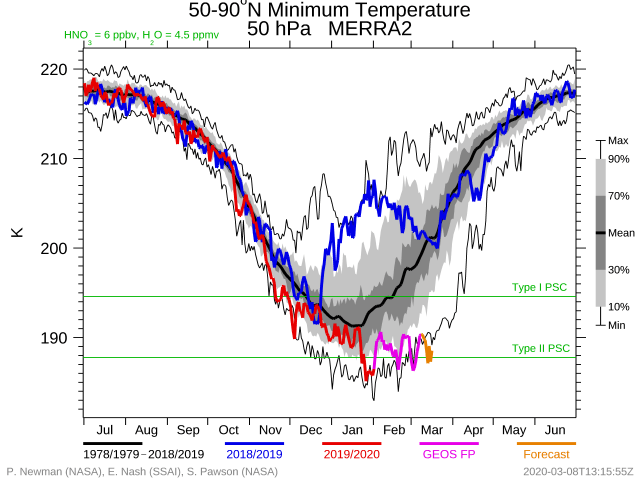 At the 50mb level, where the polar vortex is also its coldest, is where the Earth’s ozone layer is. The Sun already starts to shine over these lower layers of the Stratosphere from late January onwards. Very low temperatures enable Polar Stratospheric Clouds (PSC) to form. These clouds, combined with sunlight, start a photochemical reaction, which destroys ozone. The combination of the very low temperatures and sunlight has enabled the polar vortex to create a proper ozone hole over the Arctic. This is the same process as over the Antarctic, where the large infamous ozone hole forms every year. But the process is much weaker over the North Pole, as the temperatures usually do not go so low every year, or stay low for long. The first graphic below shows the ozone values over the polar region, showing the record low values for this time of year. The second graphic shows the ozone analysis, where we can see the “ozone hole” over the polar regions, a rather rare sight to see in the Northern Hemisphere. 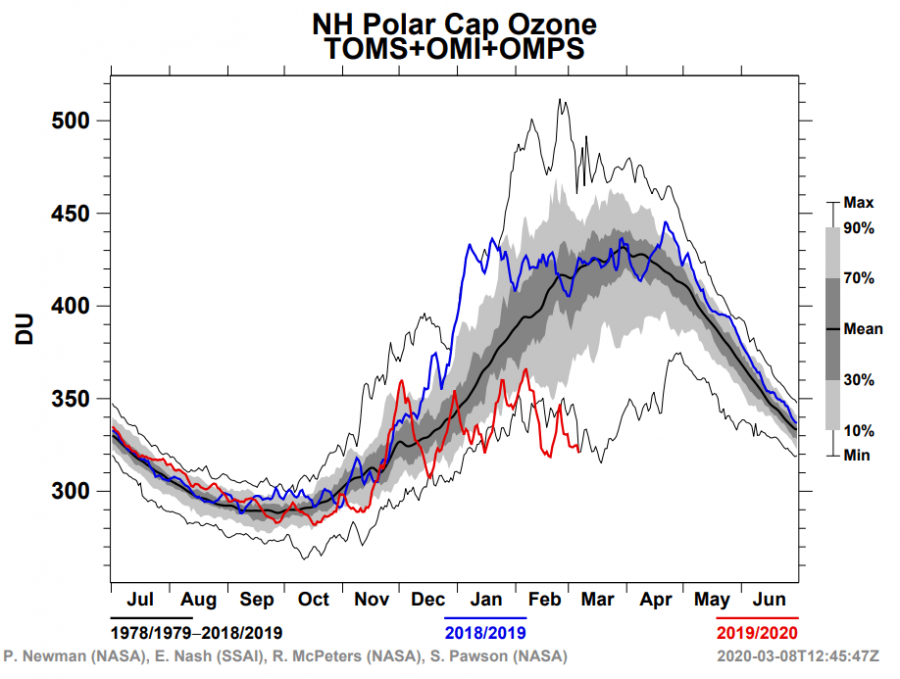 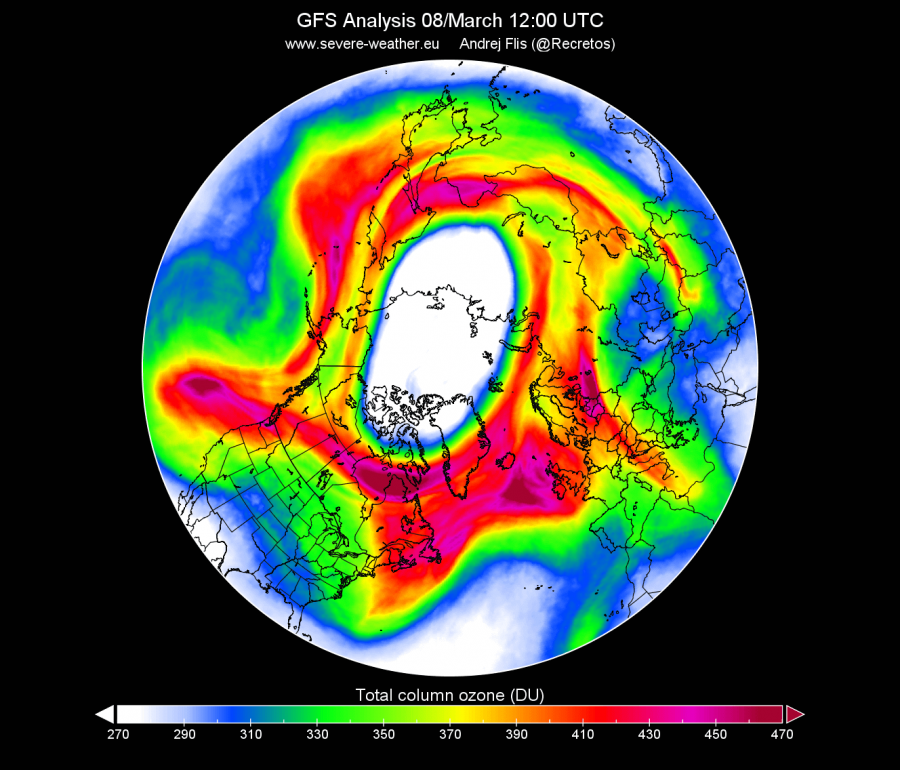 But a cure for this ozone hole is on its way. As we head deeper into spring, the polar regions eventually start to warm up, which effectively ends the reign of the polar vortex. It can happen gradually, or it can happen as a sudden stratospheric warming event. It is called Final Warming (FW). When we have sudden stratospheric warming events during winter, the polar vortex usually enters spring in a rather weak state. That means the FW is more gradual and it also does not have any major impact on our weather. But, when the polar vortex is strong, especially like this year, the FW can be rather abrupt or sudden. That means that there is a higher chance for the dynamics to reach down into the troposphere, infiltrating into the general circulation, and affecting the weather. We are starting to finally see signs of warming waves entering the upper stratosphere. As we head deeper into March, and the Sun angle over the pole increases, it will be harder for the Polar Vortex to defend against these warming waves. Its time is basically running out, as it will eventually collapse, one way or the other. The question is just in what way, and with how strong dynamics.

The first warming wave is being forecast to start early next week. It will enter the polar vortex circulation (surf zone) from the south, over North America and the North Atlantic. The main forecast is observed on the GFS model, but we also see direct support on the ECMWF model, for this first warming wave. 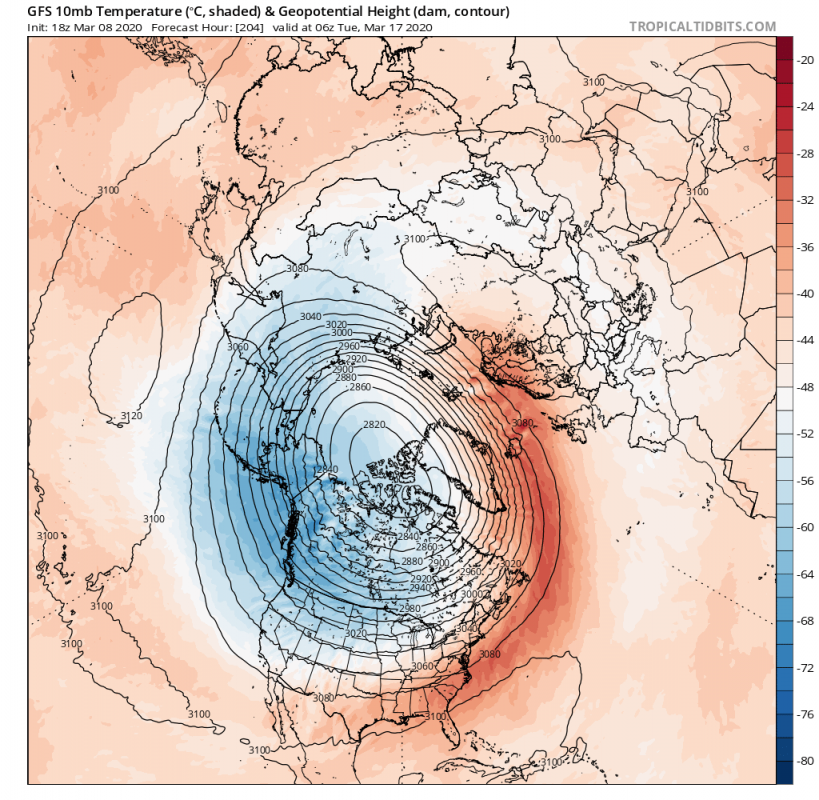 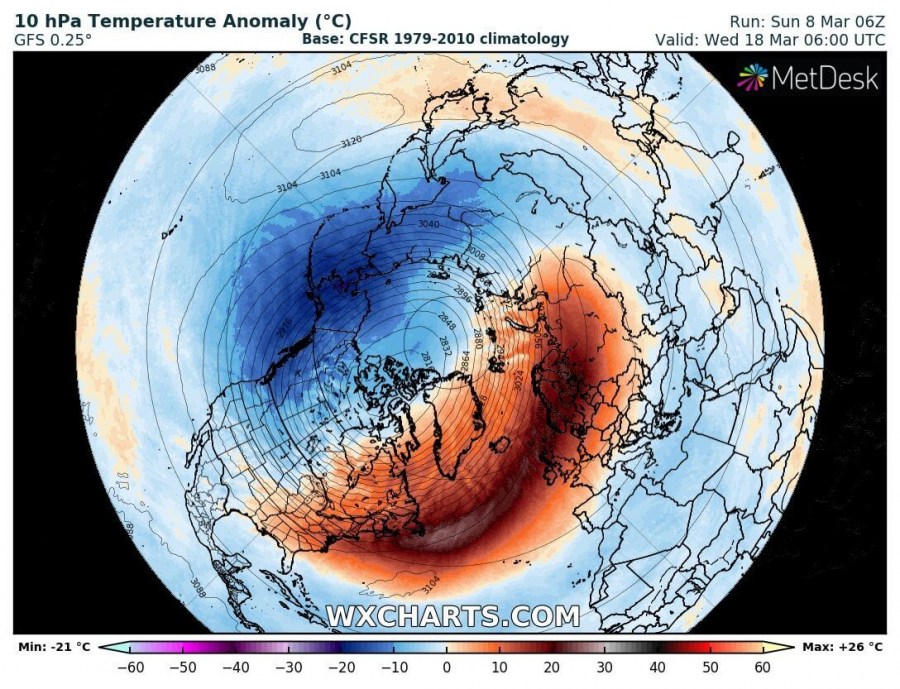 The warmer air circulates around the polar vortex and is washed out as it mixes with the colder air. But by the end of the week, the same source region starts a new temperature wave, this time a bit stronger. Along with this temperature wave, we can see a pressure wave starting to develop over the Atlantic and northwestern Europe, in the form of a “polar strato high”, a stratospheric version of an anticyclone. It increases in strength enough to start pressing against the polar vortex, changing its shape from nicely circular to more oval. At this point, we no longer have the ECMWF guidance, since their deterministic global model only goes out to 240h. 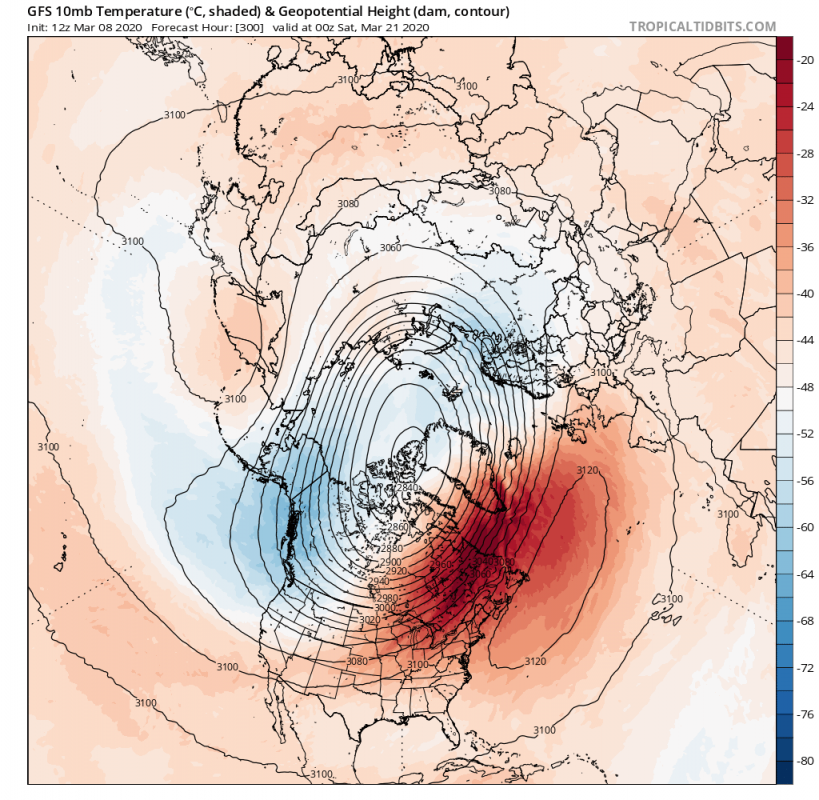 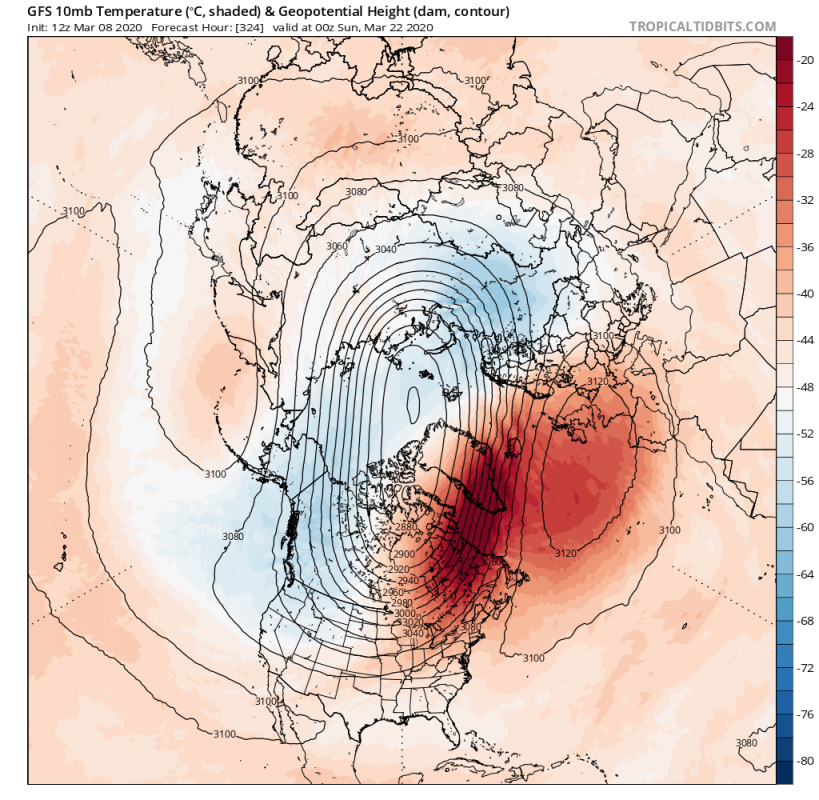 The vortex will start to weaken due to the increasing pressure on its edges via these “strato highs”, which is also called a pressure wave. Depending on the number of these highs, we call it a wave 1 or wave 2 event. On the image below we can see that we will get a wave 2 event, with one wave over the North Pacific and the stronger developed one over the Euro-Atlantic sector. The polar vortex is very elongated at this point, with one core sitting over Canada, and one over the Siberian sector. Remember this image well, as we will see something similar on the bottom of the post. If this warming sequence would persist, we would eventually see a full split of the polar vortex into two parts, effectively ending its life for this season, as the recovery chances diminish with each day further into spring. R 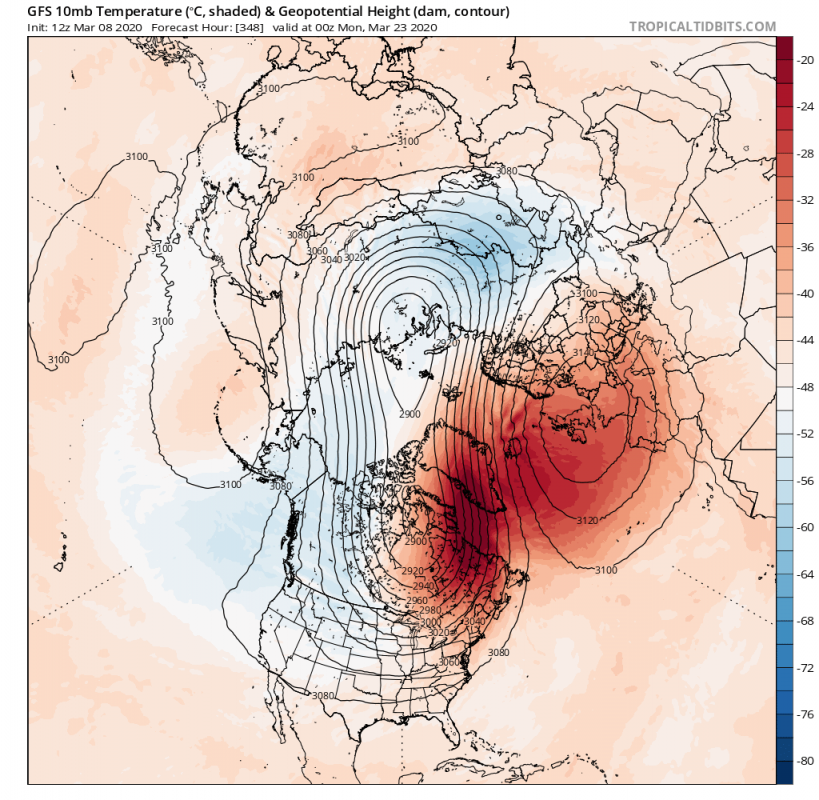 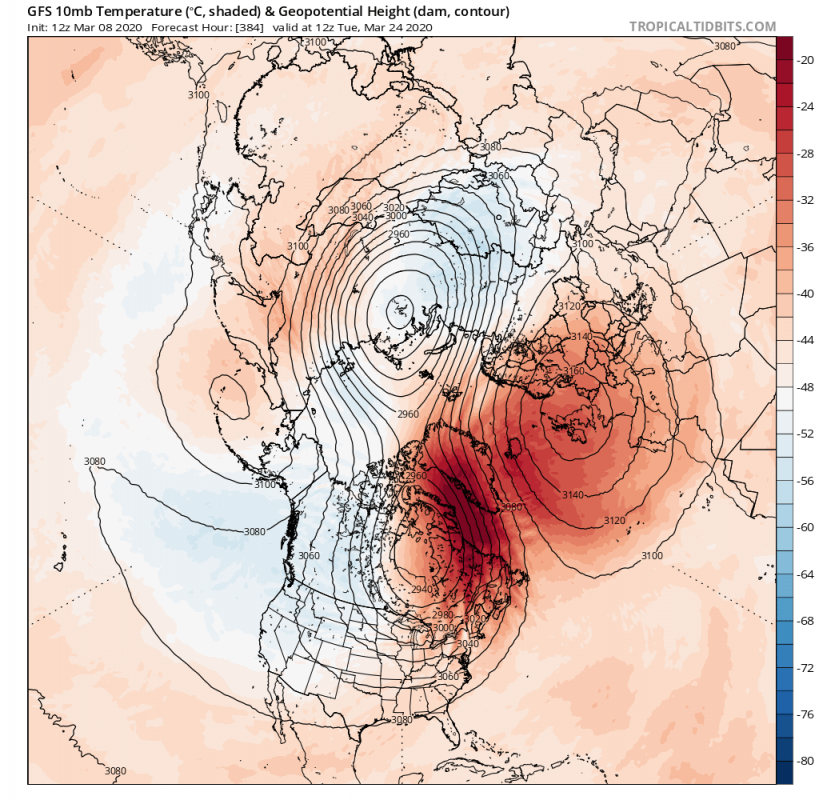 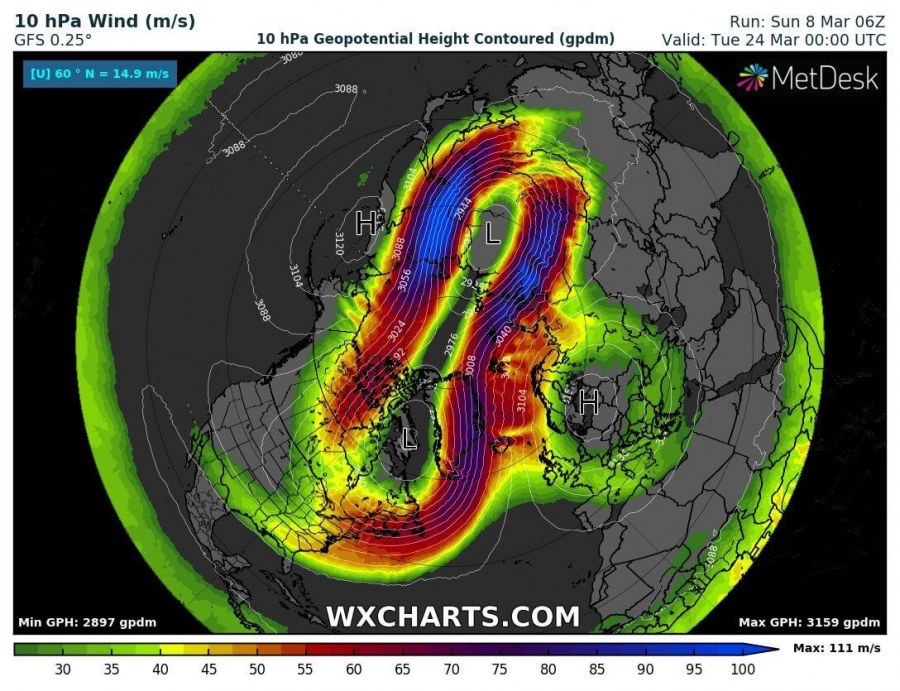 The warming over the North Atlantic is projected to be quite strong, raising temperatures at the 10mb level over 40°C above normal. 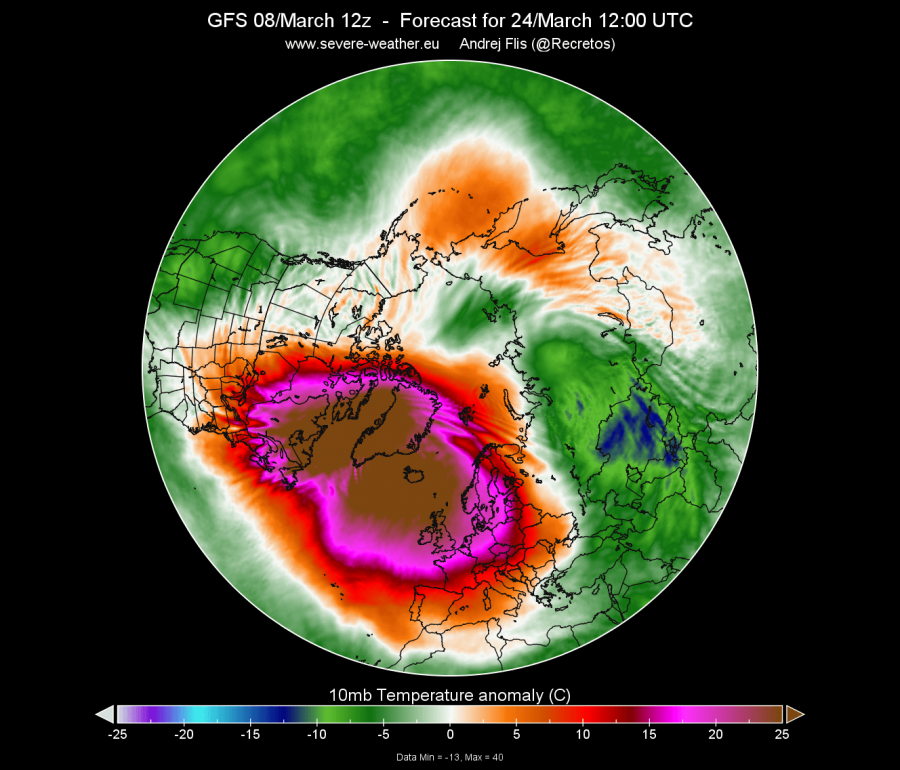 Looking specifically at the temperature wave forecast, we can see the temperature wave 1 peaking first, and the temperature wave 2 peak follows after. It makes this a bi-modal warming event.
On the second graphic, we have the forecast of the stratospheric jet stream at the 10mb level, which we use as an approximation of the polar vortex strength. As the warming starts, combined with the pressure waves, the polar vortex starts to weaken at a rapid pace. The forecasts do not yet show a full collapse and a wind reversal (10mb 60N zonal wind values below 0). But this could be the beginning of the end, essentially starting the final warming sequence. 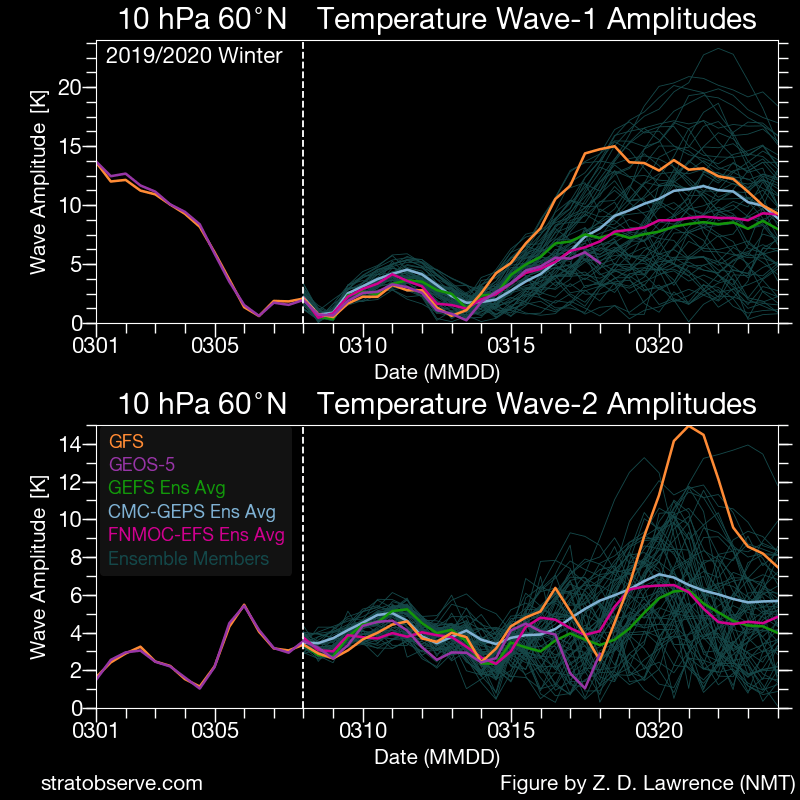 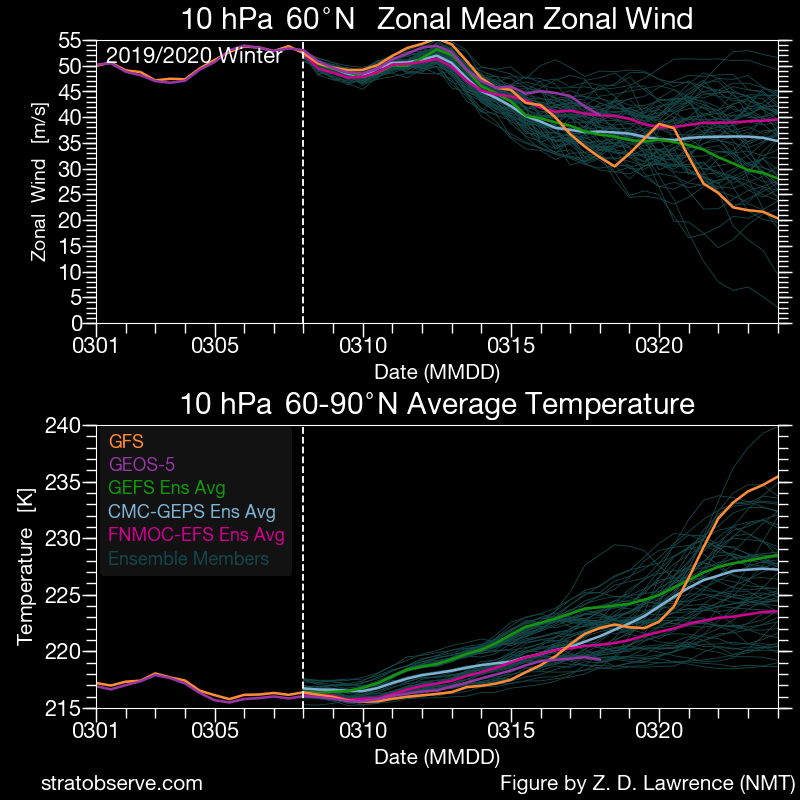 A warming event is being forecast to occur in the stratosphere (20-50km altitude), starting early next week. These sudden warming events can affect the polar vortex and, depending on the strength of these effects, they can impact our weather on the ground in some or most cases. There are many factors involved in this large scale process, so each warming event must be studied individually. As we head further into spring, the polar vortex/circulation in the stratosphere weakens, and any major sudden warming event tends to be the last one that season, until next winter. That is also called the Final Warming, if the polar vortex completely collapses. If the final warming does occur this year, it is currently too far in the future to say anything about its possible effects, since we need to see how the first warming wave verifies. The GFS and GEFS models, which are the main source of the 10-16 day forecast, have been shown to sometimes overdo these warming events in the 10-16 day range. So some caution is advised.
There have been cases when the final warming events infiltrated down into the troposphere (where our weather is) and changed the weather patterns. If this were the case this year, the final warming event could have perhaps an important effect on the development of the weather patterns for the rest of the spring, or even into early summer. But we can already see a potentially more direct feedback response in the ensemble guidance, as the elongation of the stratospheric polar vortex translates into the troposphere. This would hint at a form of a coupling event (direct connection of the troposphere and the stratosphere). The GEFS ensemble forecast shows the same polar vortex core positioning over North America and Siberia and the high-pressure areas on the opposite sides over North Pacific and Atlantic, just like in the stratosphere. If such a pattern were to appear during winter, it would be supportive of cold outbreaks into the United States and Europe. We can see a colder than normal temperature signal being introduced over North America and Europe. It is hard to say at this point, just how much colder air can be advected into Europe or the United States. The weak anomalies on the first graphic suggest a lower agreement of the individual forecasts in the ensemble average. But there is a higher possibility of colder air reaching down into the United States, as the core of the polar vortex sits over the Canadian sector, while Europe is more dependant on the positioning of the high-pressure systems in the Atlantic. 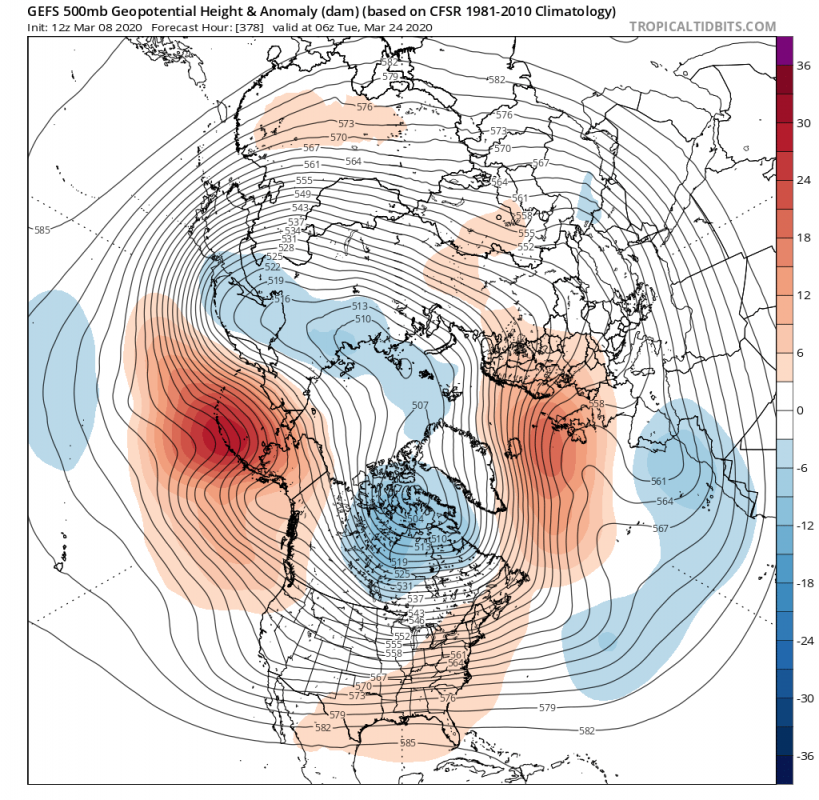 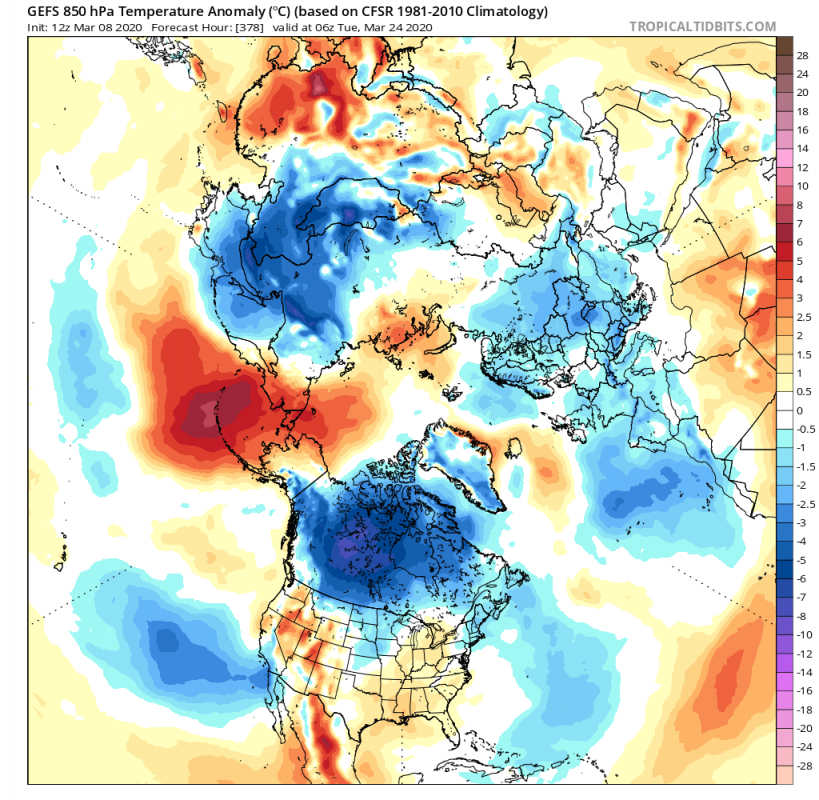 The Canadian GEPS ensemble forecasting system shows a similar general pattern, but with different positioning/distribution, it pulls colder air deeper into the United States and builds warmer weather over Europe under the high-pressure system. This is far out in the future, but it does to serve as a comparison to the GEFS forecast above. It shows just how uncertain the forecasts can get, once we get strong stratospheric dynamics into the play, despite those dynamics actually originating in the troposphere itself. All in all, it is rather confusing, but brilliant physical process. 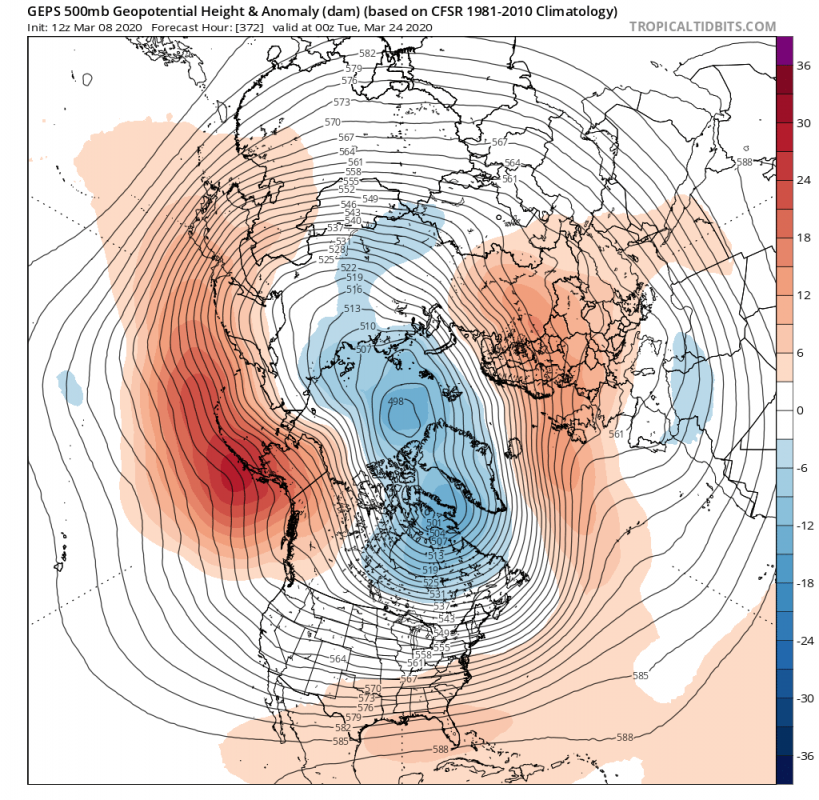 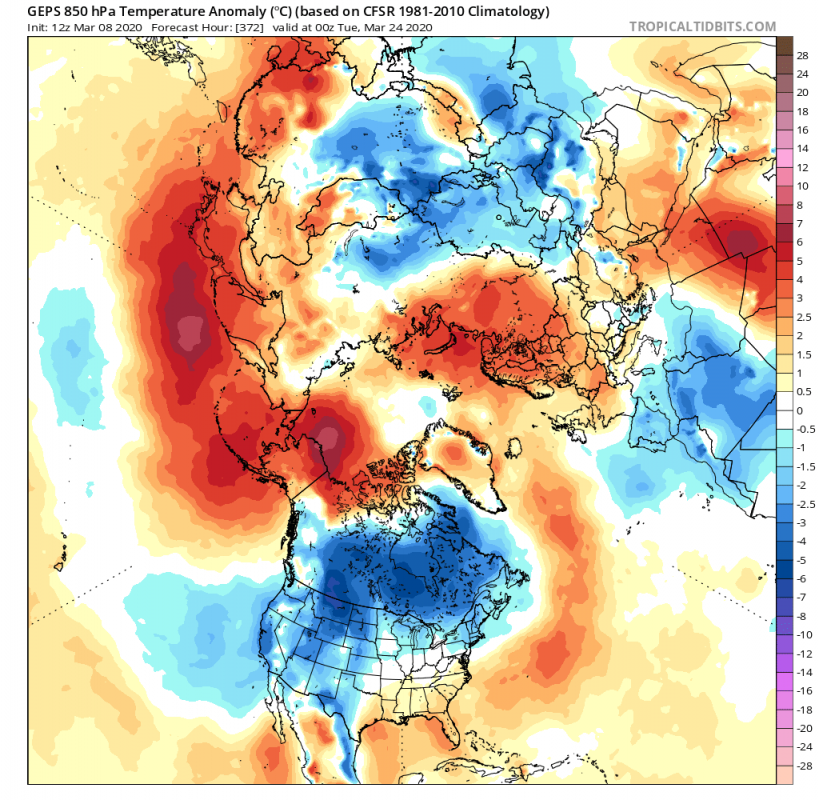 We can’t ignore the ongoing coronavirus outbreak across the world. Its spreading and prevention is also dependant on weather conditions, just like with the seasonal flu, which tends to diminish as the weather gets warmer. That is because, in warmer/hotter weather, buildings have more air circulation, people tend to congregate less and are also more exposed to UV light (UVC) which can kill airborne flu viruses. In the case of the COVID19, it was shown not to be exactly the same as a normal flu virus, so it is rather unknown how the warmer weather might affect its spreading. It was suggested by some experts that a 10-20% reduction in transmission of the virus could be expected in warmer weather. But as we have seen above, if the stratospheric warming events and the eventual polar vortex collapse would instigate colder than normal weather into Europe and the United States (and also other already affected regions), that could have a potential negative impact on the spreading of the virus. People’s immune system tends to be weaker in colder weather. The rapid warm/cold weather changes can also have a negative impact on the human immune system. In the case of the Coronavirus COVID-19, the strength of the immune system has been shown to play a major role in the body’s response to the virus, just like with the ordinary seasonal flu. A stronger immune system prevents less severe symptoms and can prevent major complications during the infection with the virus. Also, for example, if some region is under a high-pressure system, an inversion can occur, which can trap the dust and smog particles at the surface layer in major cities. That can cause respiratory problems with some people, which was shown to be dangerous if combined with a COVID-19 infection. It is well known that weather plays an important role in global healthcare, and it is no different (or even more important) during the current global Coronavirus outbreak.

We will keep you updated on any important future development, but while you wait for more stratospheric warming and circulation dynamics, check out our latest long-range Spring forecasts, from various models around the world:

*Spring 2020 FINAL outlook* After this weird winter is over, will we experience a more “normal” spring? BONUS: We added a Summer 2020 sneak peek!

Also, don’t miss our March weekly breakdown forecast, as we look at the first spring month in more detail, and where we also mentioned a possibility of a stratospheric warming event, messing around with the forecasts:

*March 2020 – weekly breakdown* First half of March continues the pattern from winter. But the second half will feature a change, as the North Atlantic pattern finally goes into a slowdown