February is the last official meteorological winter month. That means that meteorological spring starts with March 1st. Of course, the weather does not simply change overnight, so there are gradual changes occurring as the weather seasons slowly shift.

Here is the 850mb raw temperature forecast from the GEFS ensemble forecast system. You can nicely see the circulation of the cold polar air over North America, Siberia and the North Atlantic. We will go into more details below.

Current analysis shows a positive AO/NAO with a very deep monster cyclone Dennis in the North Atlantic, bringing severe weather to UK, Ireland and Iceland. It had a cold front that was extending all the way back to SE USA and has pulled a lot of cold air from the north down into the North Atlantic. On its south and east side, it has enabled warm air transport, causing abnormally high temperatures over mainland Europe. The cyclone will move further east, bringing some colder air into parts of western and central Europe as the cold front moves in. 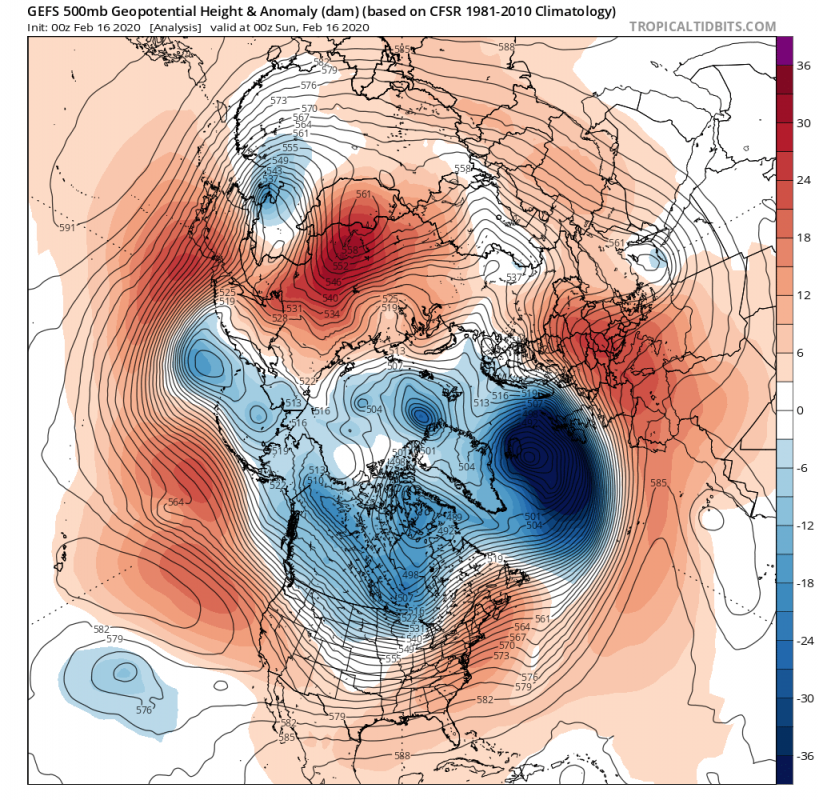 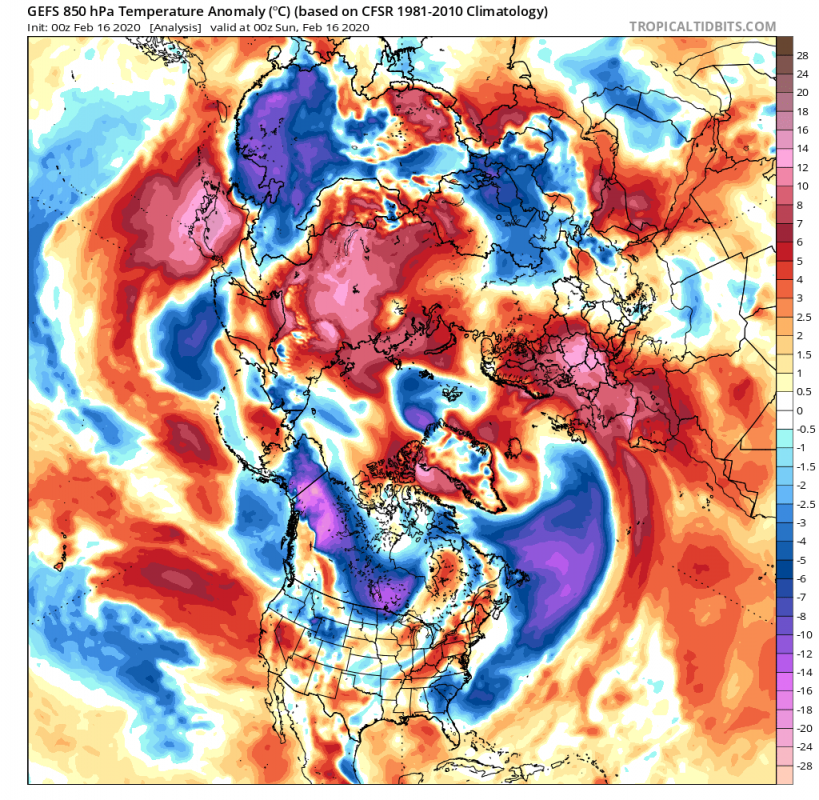 In around 4 days, a strong circulation low-pressure system in Canada, will send a cold front down across central and eastern United States. It will not be a long-lasting cold episode, as it is only a transitioning cold front, but it will be rather cold and sharp, with a temperature drop by 20°C in many places in the central-north United States. 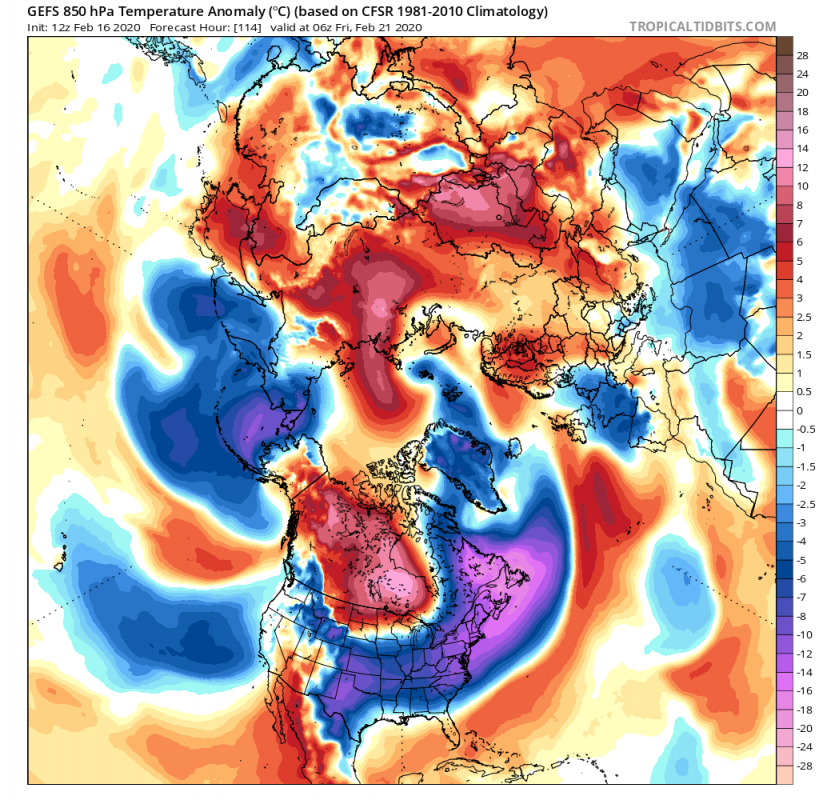 The overall circulation of the tropospheric polar vortex will retain the lower pressure systems in the North Atlantic and the Greenland and Canadian area. But by day 10, there will be slight disorganization. We will have the main core of the tropospheric polar vortex moving over the Scandinavian part. A trough extension is present over the Aleutians, and another one more important, over the south-central USA. Both the Scandinavian low system and the one over the south-central USA, establish a colder meridional flow from the north, as seen on the temperature anomaly chart. One system pulls colder air into the Scandinavian and North Atlantic area and the other one over the western United States. 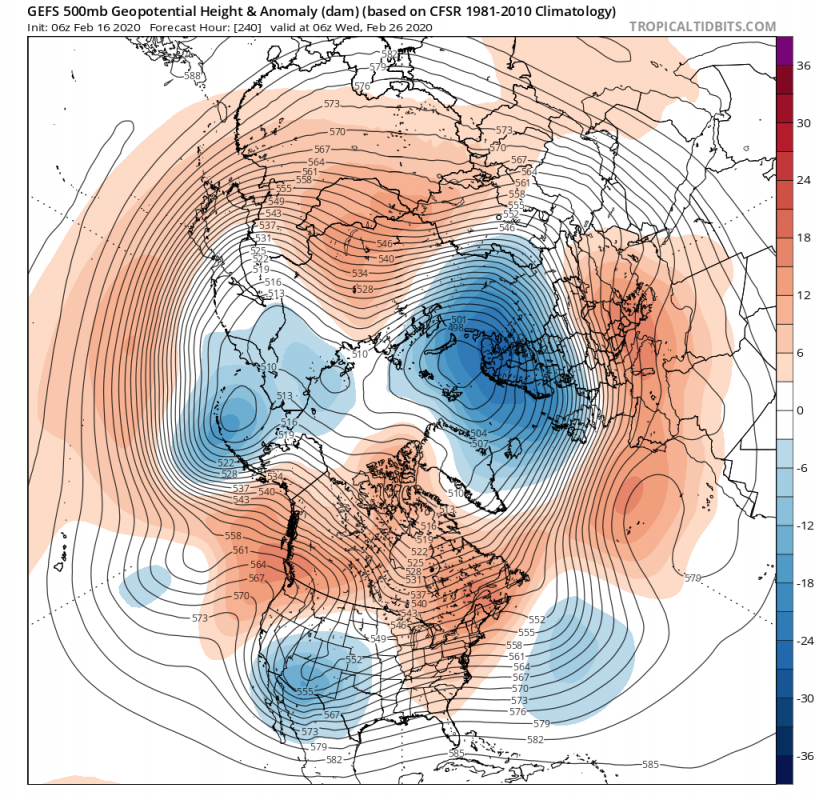 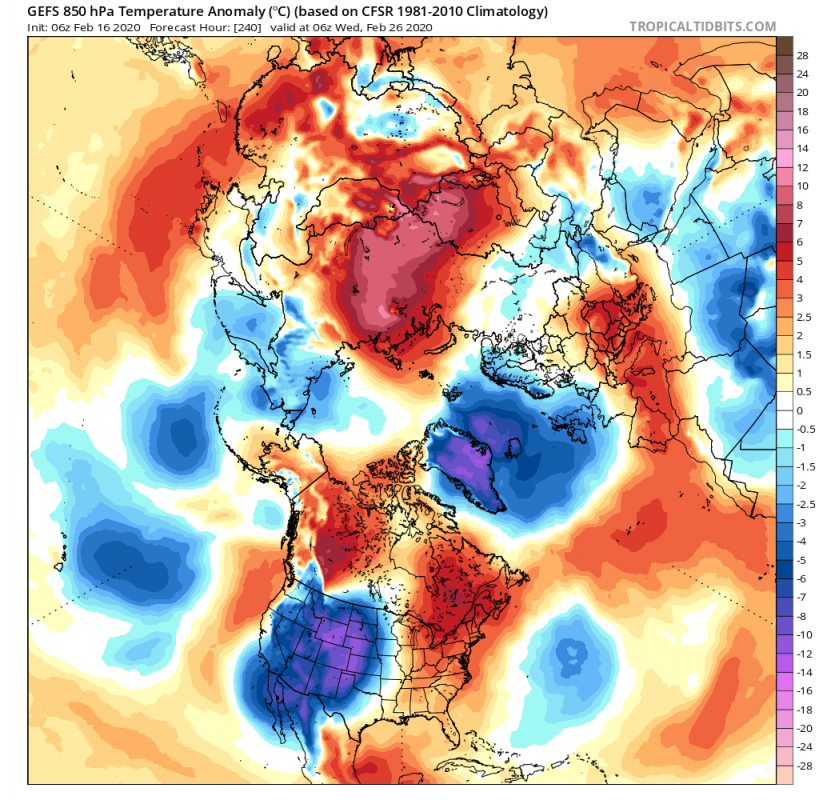 By the weekend, the picture does not change very much. The key difference is the low-pressure system over the United States, which is moving further east. That means that the region of cold air transport is also moving along the east. We can see on the temperature chart that the colder air has expanded further east across the United States. Over the European sector, we see a brief attempt of the lower pressure system trying to extend into north-central and western Europe. That is also evident on the temperature anomaly forecast. 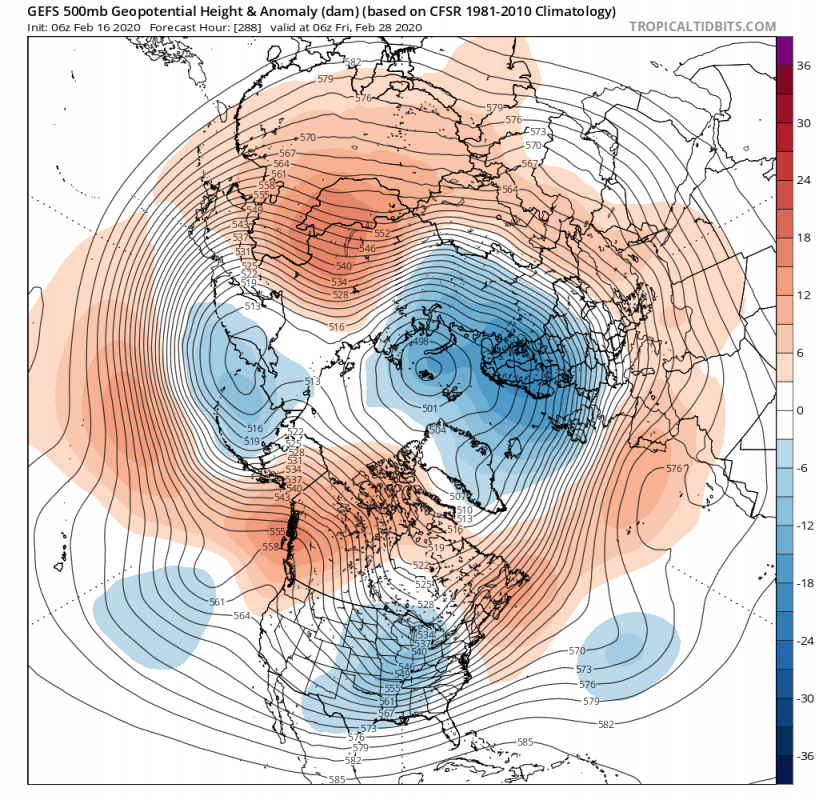 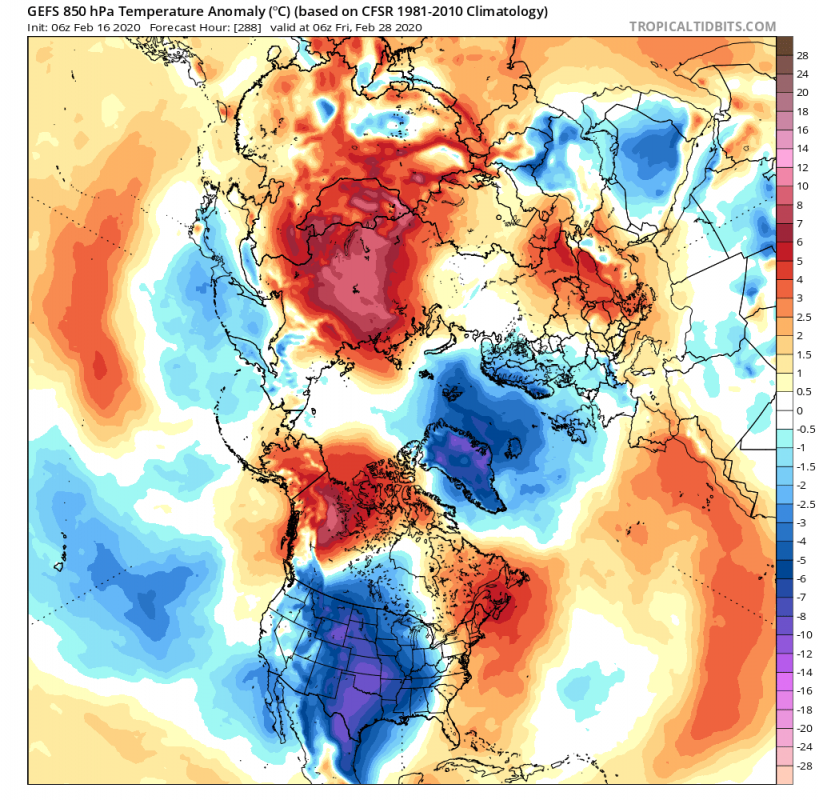 The low-pressure system over Scandinavia does seem to be semi-permanent for the time being, while the low-pressure system over the United States continues its transition and moves further east and also starts to lift somewhat to the north, with the center in eastern Canada. It is strong enough to pull a decent amount of colder air across much of central and eastern United States and also south-eastern Canada. Over Europe, the situation is rather the same for the time being, with hints of some cooling perhaps into central Europe, with more pronounced colder air over Scandinavia. UK and Ireland are also trending towards some cooler air. Parts of north and the central UK and Northern Ireland could potentially get enough cold air for some snowy episodes. 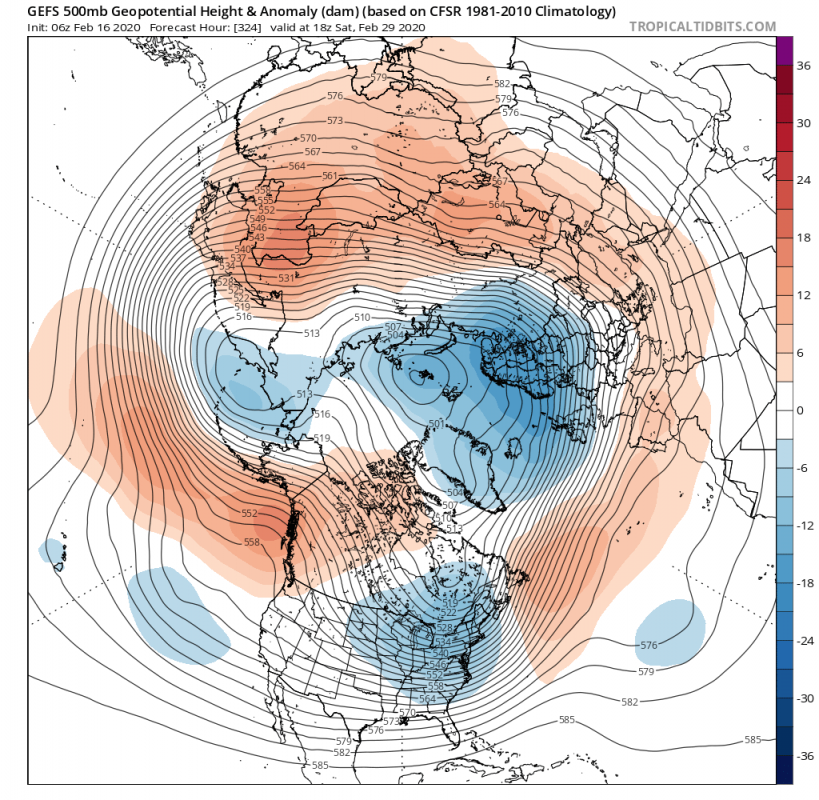 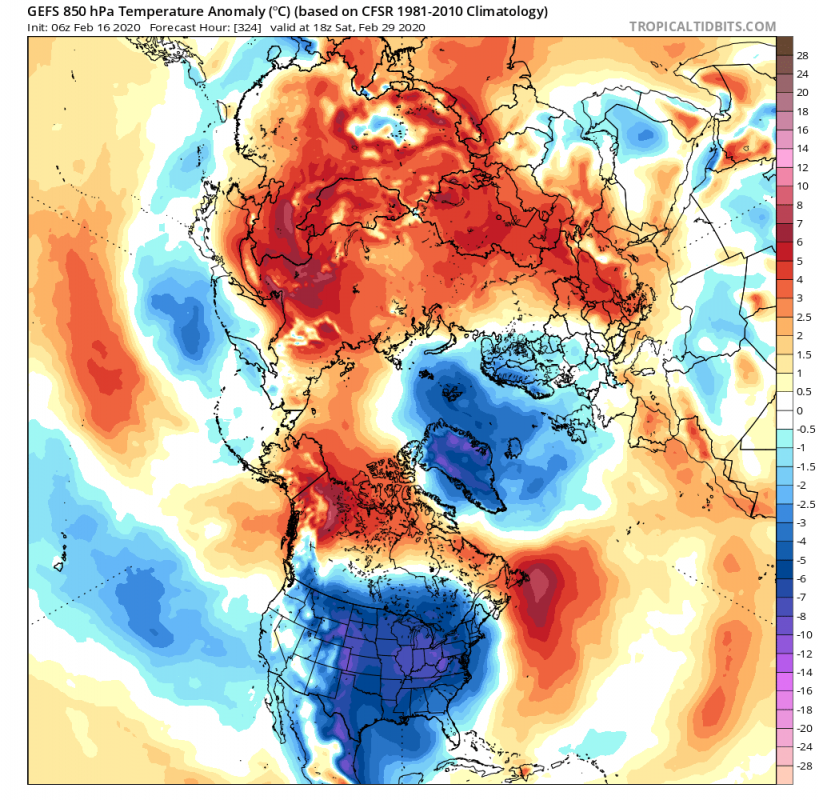 By day 15 we enter March and the official start of the meteorological spring. But the lower pressure system over North America lifts further northeast, connecting with the Scandinavian low-pressure system, creating a bridge over Greenland. This could aid in building a ridge/higher pressure system in the central North Atlantic, potentially helping to transport some more colder air over the British Isles, perhaps reaching into north-central Europe. The lower pressure system now over northeast Canada, retains the north meridional flow, transporting colder air into parts of central and eastern United States, and of course parts of southeast Canada. The cold episode does not seem to be as strong as the one coming in a few days now but seems to be set up for a bit longer period of time. 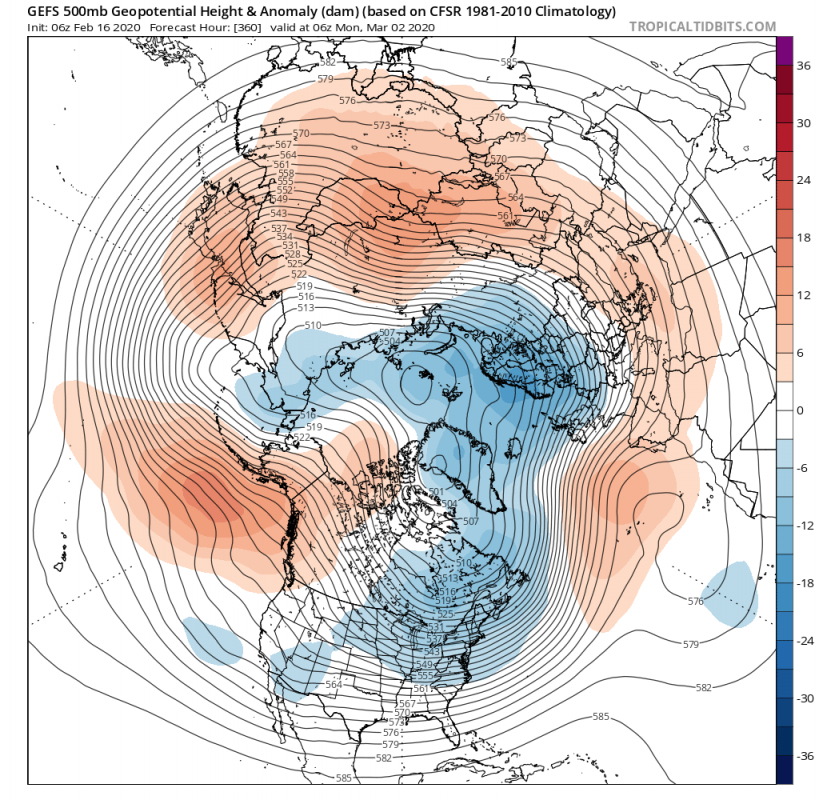 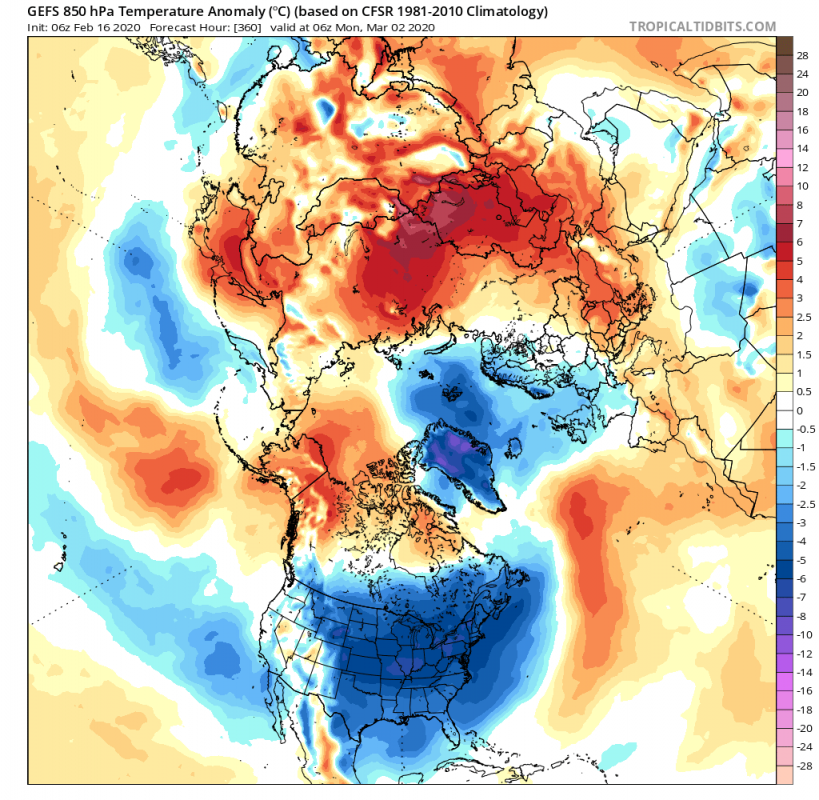 Looking at the PNA and NAO Index, we can see the PNA index going through a pattern shift from negative to positive, and we can see the positive NAO weakening. You can read what is the NAO and PNA, and why are they significant.The NAO slightly weakens due to the main center of lower pressure transitioning over to the Scandinavian sector. And the PNA undergoes a pattern shift, due to the lower pressure system moving from west to the east, changing the temperature patterns. 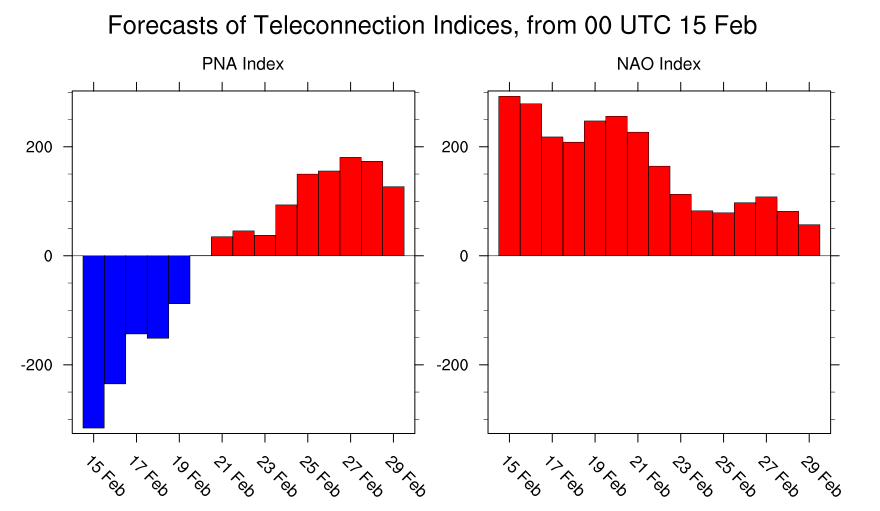 As for March itself, the forecast from the CFSv2 model is generally a continuation of the “winter” patter, with highly above normal temperatures across Eurasia. We see the high pressure over Europe and the North Pacific, while lower pressure truly dominates the North Pole and the North Atlantic. We see an extension over North America, down into the United States. The temperature forecast reflects this with normal to below normal temperatures over CONUS, as meridional colder air transport could be enabled over parts of western United States, perhaps also towards east under a similar transition as we can see on the 10-15 day forecast above. Precipitation anomalies show mostly drier than normal over parts of central Europe, while northern Europe is under wetter conditions due to the low-pressure wave train from the North Atlantic by this forecast. We do have to emphasize that this is just a forecast from a single model, and more models should be taken into account for stable forecasts. But it does serve as a practical example of the expected trends.

We will keep you updated on any important further development. While you wait for more updates, don’t miss the latest Arctic sea ice data, which shows huge growth in early February, causing the polar ice cap to be largest for this time of year in over 10 years!

*Rapid ICE growth* Arctic sea ice reaches the largest early February ice area in the past 11 years! It even exceeds the 2001-2010 average size

Also, don’t miss the breaking weather event in the Antarctic region, as temperatures over 20°C were recorded, breaking the all-time records for the region:

*BREAKING* The Antarctic region has measured an incredible new absolute temperature record of +20.7°C (69.35°F), as an abnormally warm airmass moves over the Antarctic peninsula!