March is the first spring month, and the latest forecasts now show that it will transition slowly into proper spring, as the North Atlantic cyclonic pattern slowly weakens.

March began quite dynamically. It continues the weather pattern from winter, with deep low pressure over the North Atlantic and northern Europe. The first graphic shows the 5-day geopotential height anomaly average. We can see the lower pressure extending down into Europe, which is a low-pressure system moving into western and central Europe. On the second temperature map, we can see colder air moving into the continent, while far eastern Europe remains abnormally warm for this time of year.
Also, an important feature to note, is the North Pacific high-pressure system, working in tandem with the large low-pressure area over the North Pole. This has a major impact on North America, as the polar low system transports colder air into Alaska and northern Canada. But as the low pressure extends down into east Pacific and the USA west coast, that promotes southerly airflow, which brings warm weather to most of the continental United States, and raises pressure. 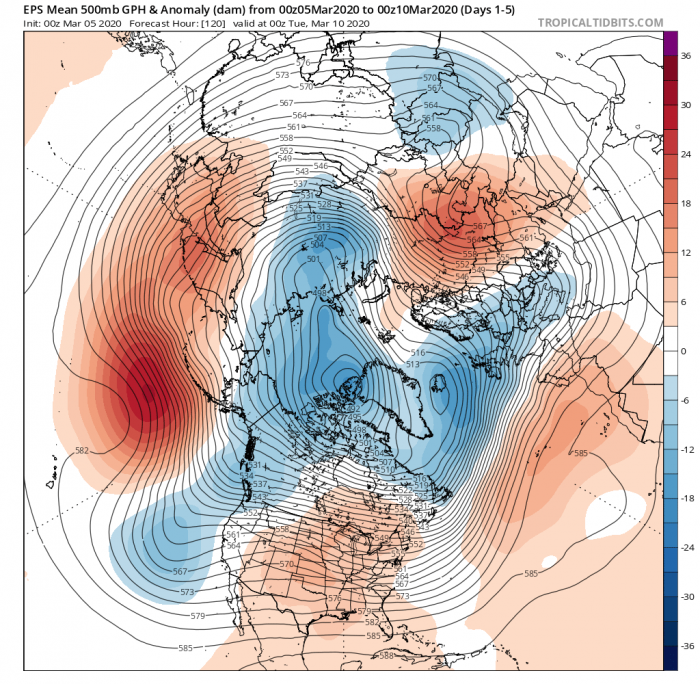 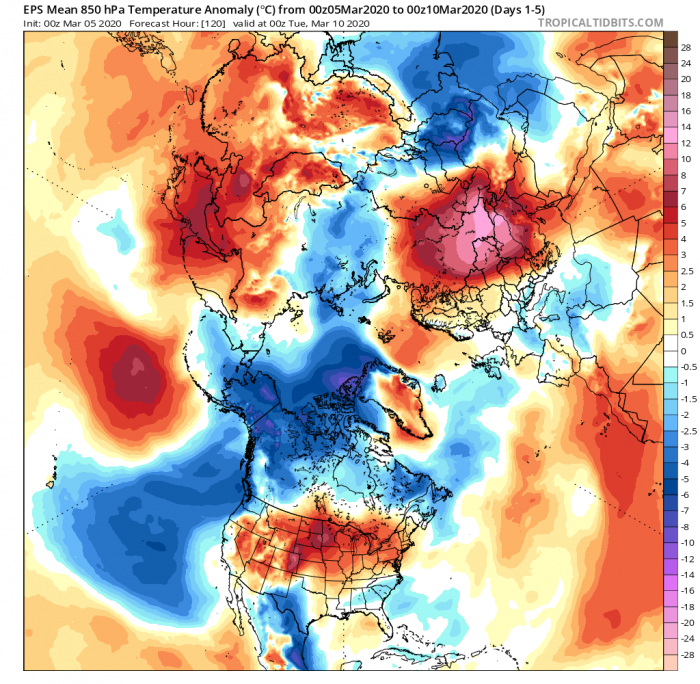 But in this weekly average, we can find a cold front passing over the eastern half of the United States, bringing colder air to the eastern states. But this is only transitional, as higher pressure will start to build behind the cold front. We can also nicely see the colder airflow into central and western Europe. 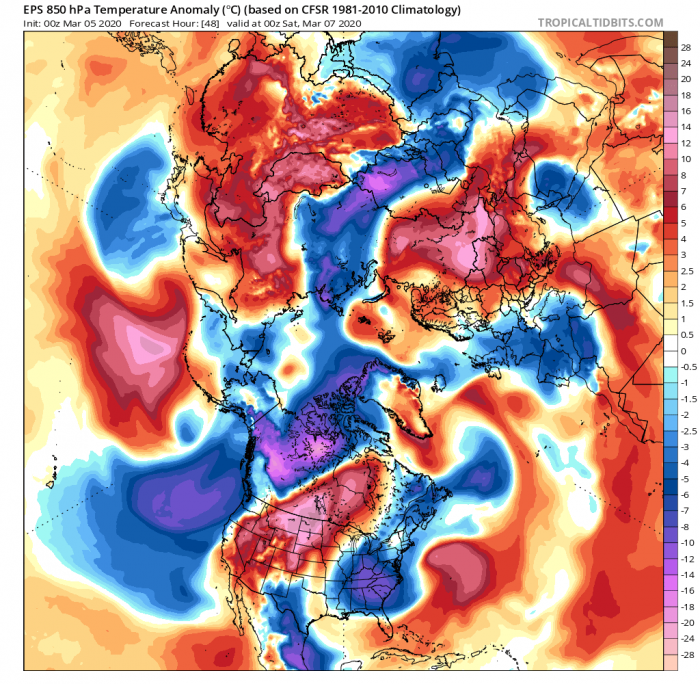 Week 2 will feature a slight advancement in the circulation, as another cycle of deep low-pressure systems runs across the North Atlantic, impacting the British Isles, Iceland, and Scandinavia with precipitation and winds. A high-pressure area will form behind it, which will help to transport a colder airmass down into north and central Europe, and transition it towards east.
A shift towards the east is also seen in the pattern over North America, as the higher pressure moves further east behind the cold front. The lower pressure from the Pacific moves slightly inland. This will bring come cooler air to the western United States. But the southerly airflow that this low pressure creates on its eastern side will bring warm spring temperatures to central and more to the eastern United States and southeast Canada.
A deep low-pressure system, the core of the polar vortex, dominates the polar regions, bringing cold air to Alaska, Greenland, and parts of eastern Siberia. 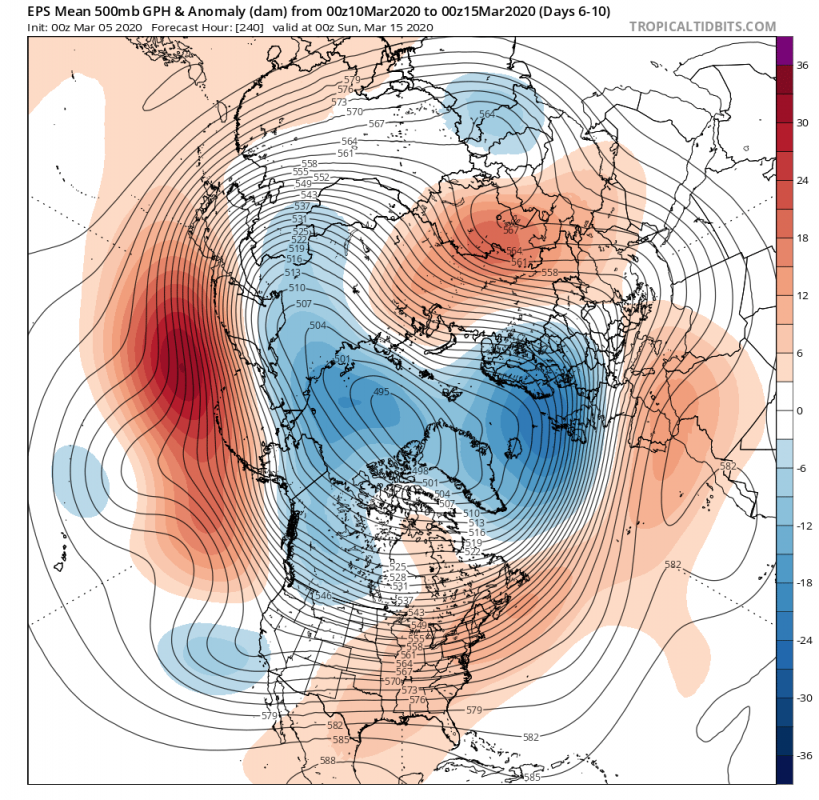 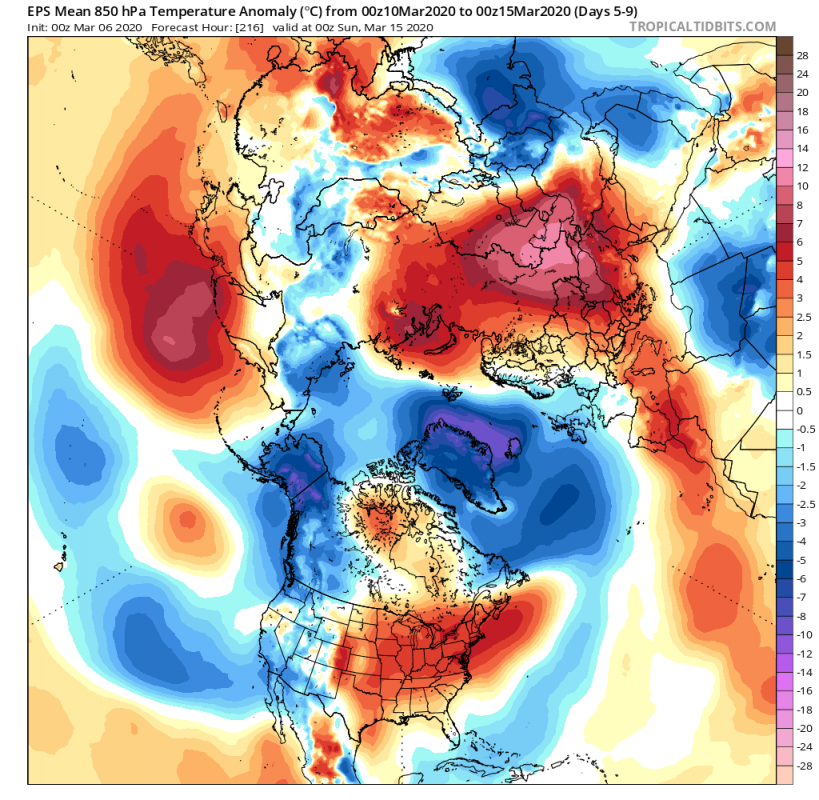 The best way to quickly overview the circulation changes is via atmospheric indices. We use the PNA (Pacific North American) index to explain the weather pattern over the North Pacific and North America. For the Atlantic, we use the NAO (North Atlantic Oscillation) index, which explains the variability in the North Atlantic pressure patterns, affecting Europe and also North America. You can learn more about the PNA and NAO variability in our article.
We can see a slowdown in the North Atlantic pattern, as the NAO index weakens and turns neutral. This means that the pressure difference between Iceland/Greenland and the Azores area is reducing, indicating a weakening of the jet stream in this area and its movement north. The falling of the PNA index agrees with that, as the main area of cyclonic energy is starting to pull into the Arctic circle and over Alaska and North Canada. As a side note: We can see the peak of the NAO strength between the 9th and 11th March, which is due to the transition of a deep low-pressure system across the North Atlantic, impacting northern Europe, as mentioned above. 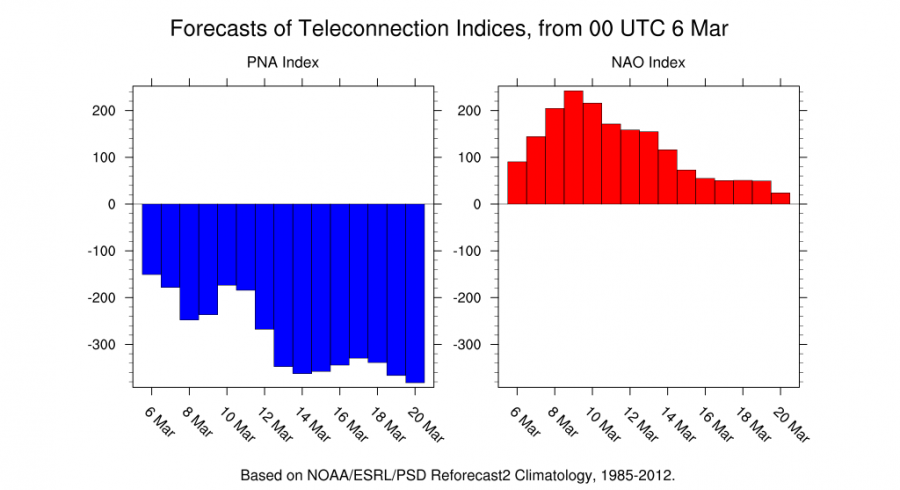 Week 3 is when the interesting stuff begins. We see a weakened North Atlantic Oscillation, and a northward shift of the jet stream, as a lot of energy is now stored in the deep low system over the polar region. That is the tropospheric core of the polar vortex, which is currently at record strength in the stratosphere, for this time of year.
The polar vortex core works in tandem with the strong North Pacific blocking high, amplifying the jet stream over the North Pacific and into Alaska. The blocking high promotes north flow and a fall in pressure over western Canada and downwards into the western United States. The temperature map reveals the transport of colder air around the blocking high. The lower pressure over the western United States does help to sustain the high pressure over the eastern parts, keeping that area under south flow and a warmer spring airmass. We can basically see North America is almost divided into two seasons.
Higher pressure over eastern North America and into North Atlantic helps to keep the North Atlantic area under control, and lowering pressure over eastern Atlantic. That is also in tandem with pressure rising over north/central Europe. That means that a more temper weather pattern and that cooler Atlantic air will enter into Europe. But it is a slight break from the constant windstorms and heavy rainfall for the UK and Ireland. 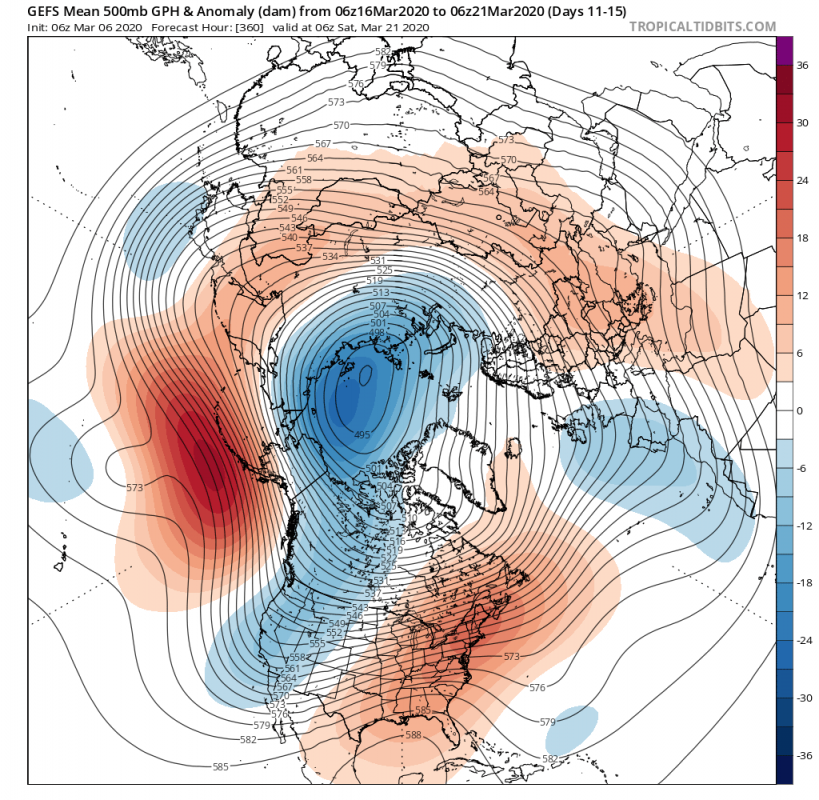 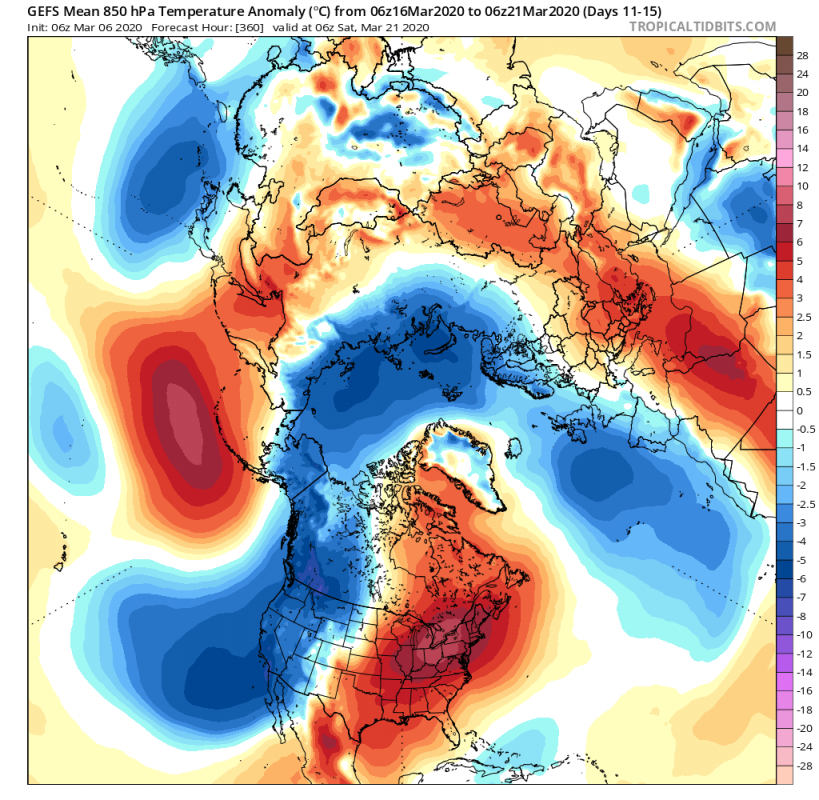 Surface temperature anomalies reveal the cooler Atlantic airmass affecting western and northwestern Europe, while North America is divided in half, influenced by polar air in the northwest and cooler air int he west, while spring dominates the eastern parts. 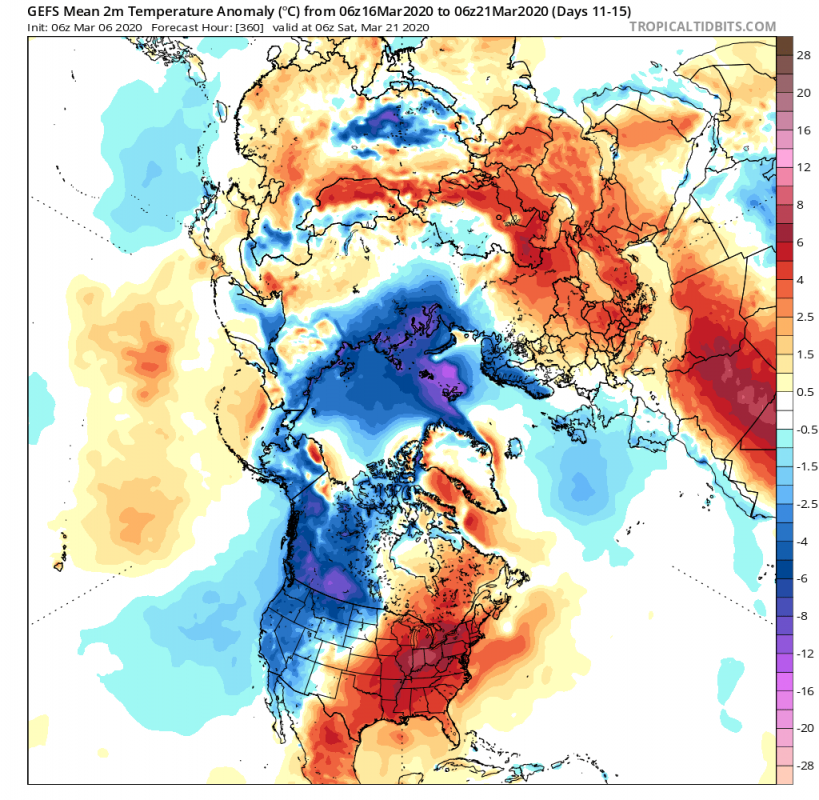 For week 4, we can mainly look at the trends, which in this GLOBO model show the continuation of the circulation pattern from week 3. The polar vortex core continues to dominate the polar regions, working in tandem with the North Pacific blocking high to sustain the lower pressure over western North America and high pressure over the east. We can see residual low-pressure areas across the central and eastern Atlantic, mainly separated from the polar jet stream, as high pressure dominates the north/central Europe.
On the temperature graphic, we see a quite similar picture as in week 3, with the cooler Atlantic air affecting western Europe, and the Polar air transport into northwest North America.
Spring weather is dominating central and eastern Europe, and also the eastern United States. 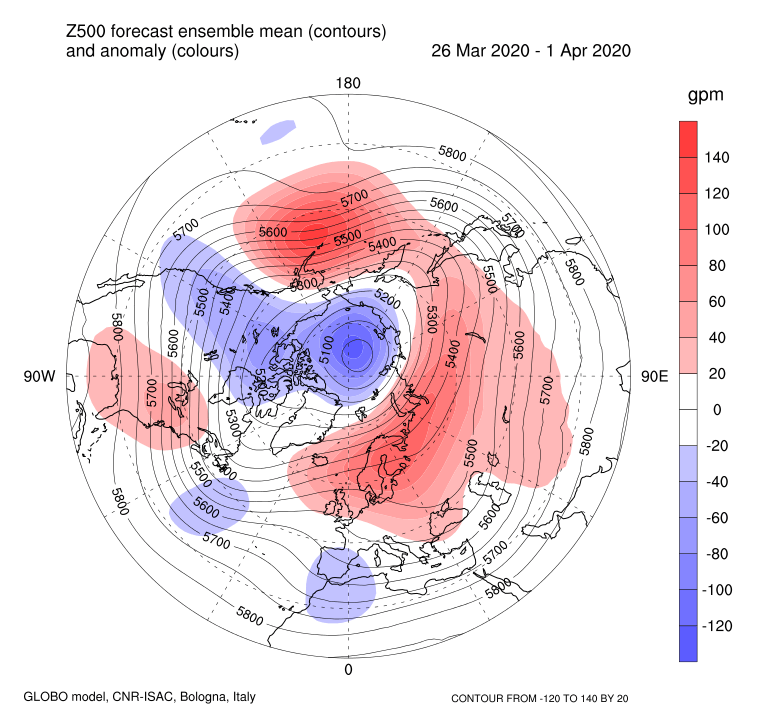 The CFS model also agrees with this, with the difference that it has a stronger northwest/north Europe high-pressure area, which means drier conditions for northern Europe, and wetter for southern Europe, as lower pressure brings moisture and rainfall to the area. The temperature forecast is the same as the GLOBO has above, with cooler Atlantic air affecting western Europe, while spring warmth arrives to central and eastern Europe and North America. 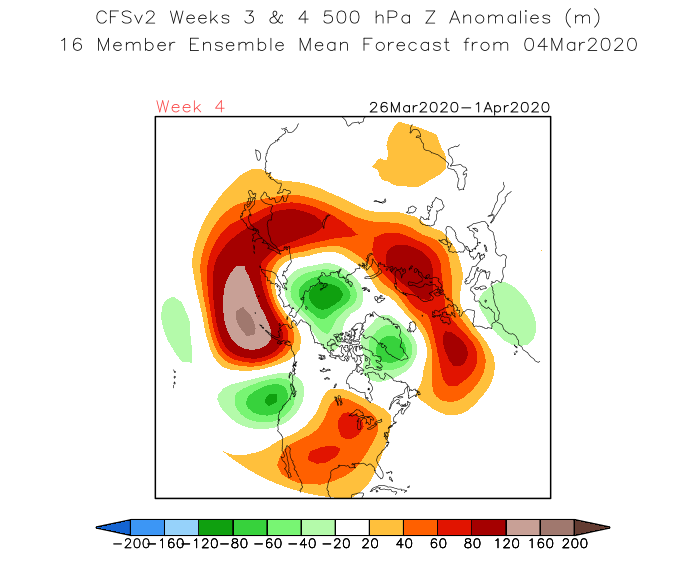 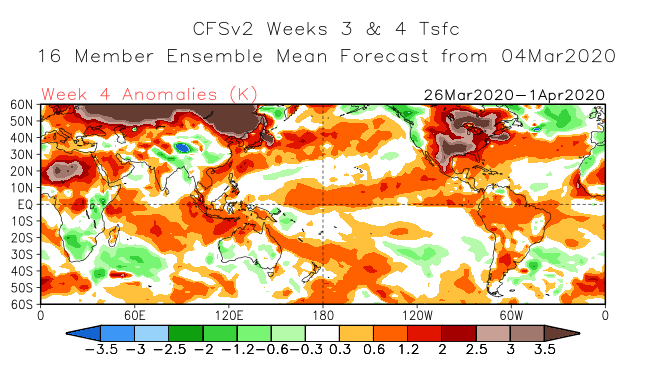 What we can take out of these forecasts, is the warmer spring weather arriving to the central and eastern United States and parts of southern Canada. Western continent will be dominated by lower pressure and more unsettled weather. It is important to note that lower pressure in the west means that there are low-pressure systems likely to travel across the continent, which poses a high risk for severe weather outbreaks in the south/central parts of the USA, more specifically for the tornado alley.  In Europe, the dominance of the North Atlantic beast lows will slowly end, and more high pressure will dominate the region, with cooler Atlantic air affecting western Europe from residual lows, as the polar jet stream disconnects towards north.

We will keep you updated on any important further development. While you wait for more updates, don’t miss the latest SPRING 2020 forecast, which looks at the entire 3-month period: