The South pole ozone hole ends its life-cycle as top 4 smallest on record, after being devastated by the record-strong Sudden Stratospheric Warming event in September!

Back in September, we witnessed a record strong Sudden Stratospheric Warming event over the South pole. These events are in most cases true game-changers for the weather across the hemisphere they happen. But its strongest effect was seen as a war on the ozone hole.

The warming was strong enough to reduce the size of the infamous ozone hole over the South pole. The ozone hole forms as the stratospheric clouds form in the cold air (below -78°C) in the stratosphere (15-35 km), which start a photo-chemical reaction, that destroys ozone, once the sunlight hits those clouds. That is why the ozone hole only forms in spring when the air is cold enough and Sun rays are already strong enough.  That reaction (powered by the human releases of CFC and HFC aerosols) destroys ozone, and creates the well-known ozone hole, an area of very low ozone concentration. 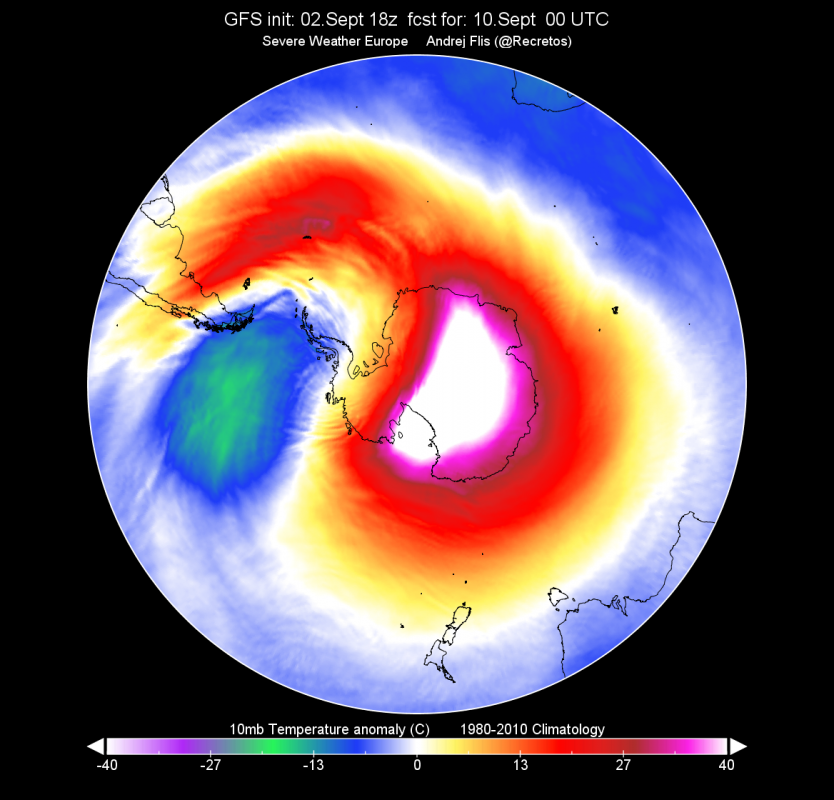 The record-strong SSW event over the South pole. Image by: SWE

Ozone is the protective layer that shields us from dangerous UV radiation. Under an ozone hole, that protective layer is gone, which can cause problems for living organisms, as the harmful UV radiation hits them. Its well known to cause skin cancer.  A stratospheric warming event naturally warms the stratospheric air, reducing the amount of stratospheric clouds, and limiting the ozone destruction process. That all together limits the size of the ozone hole, as we can see and monitor. The image below shows the ozone analysis for September 2019, from the NASA ozone monitoring project. We can see high values of ozone in red, powered by the stratospheric warming, since warmth and ozone go hand in hand. The ozone hole (lower, blue values) is a bit limited in size and does not feature severely low values of ozone (violet color). Some of it was displaced towards the tip of South America.

September 2019 ozone levels over the South pole. Image by: NASA

Looking at the archives, we can compare this September with September 2000, when the largest monthly extent of the ozone hole was observed. We can see a huge difference in size compared to this year (above) and also lower ozone values (more ozone destruction). 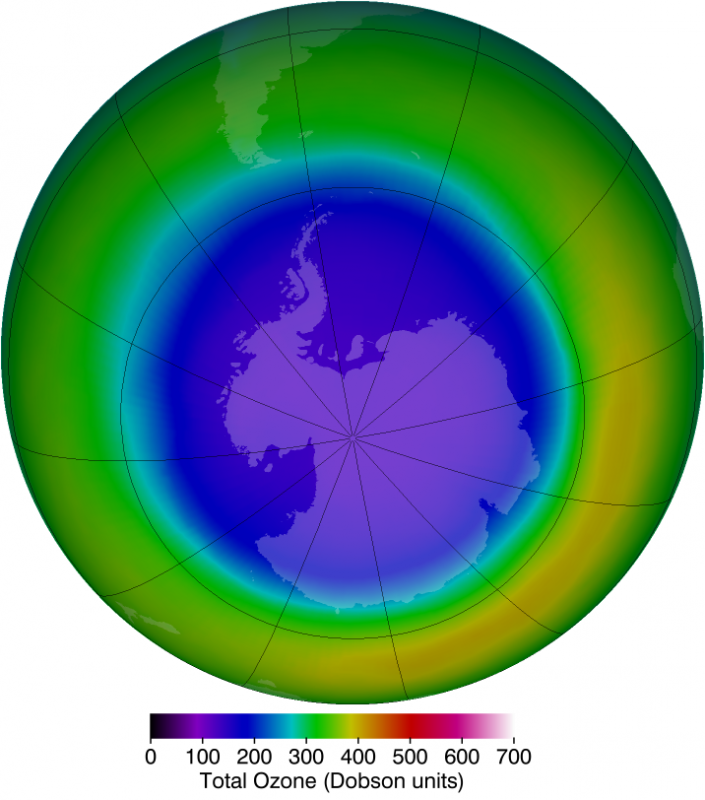 September 2000 ozone levels over the South pole. Image by: NASA

The size analysis from ECMWF data (graph is from the Copernicus EU project), shows the size of the ozone hole being well below the normal for the past 16 years, and one of the lowest since late 1970’s, when the ozone hole was first noticed to form. As the stratospheric warming began in September, the growth has quickly stopped and the ozone hole never grew above the previous size again. The ozone hole usually disappears between mid-November to late-December. This year we might witness one of the earliest dissipates of the Ozone hole in over 30 years.

ECMWF Analysis and forecast of the ozone hole size. Image by: Copernicus-EU from ECMWF data.

ECMWF Analysis and forecast of temperature at 50hpa level (~19 km). Image by: Copernicus-EU from ECMWF data.

We can see the strong stratospheric warming on the temperature graph for 10mb (~30-32 km), where the temperatures over the entire polar region were up to 20°C above the last 40 year maximum! 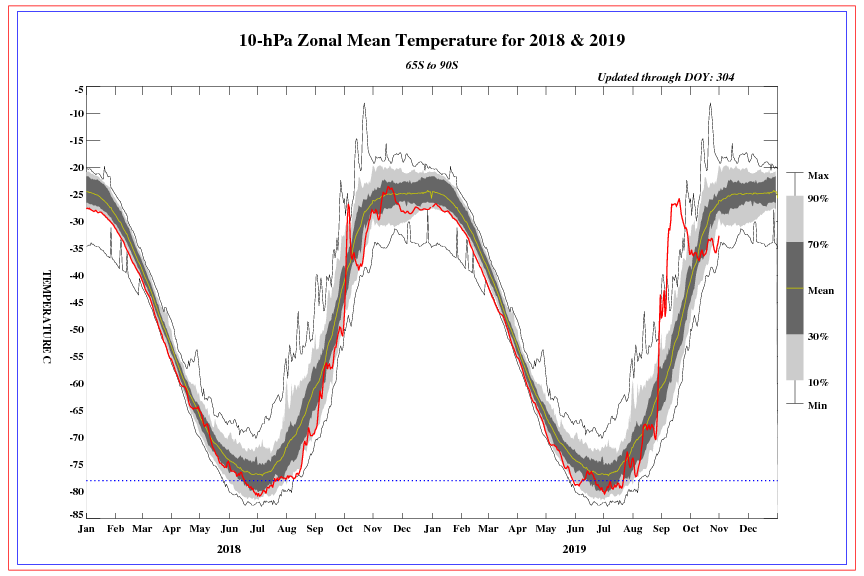 10mb temperature progression over the South pole. Image by: NOAA/CPC

We can see the strong stratospheric warming if we look at the temperature anomaly-height profile over the South pole. The warming began in early September, and reached its maximum in mid-September, as it propagated downwards with altitude at the same time. We can, at present time, still track the remains of this strong warming event, as warm temperature anomalies in the upper troposphere (~10-15 km). 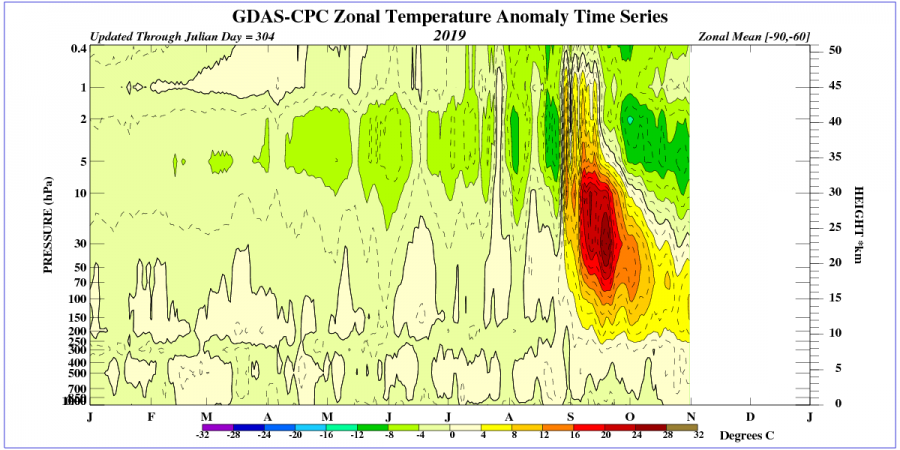 Vertical temperature anomaly profile over the South pole this year. Image by: NOAA/CPC

As we head closer to winter, we will closely monitor the development in the stratosphere over the Northern hemisphere. There are important dynamics at play in the stratosphere, that can significantly alter the weather on the ground in just a few days. You can check out the winter forecast in our latest long range article, where we take a look at many different long range modelling systems, and  dissect what they show for the upcoming winter! 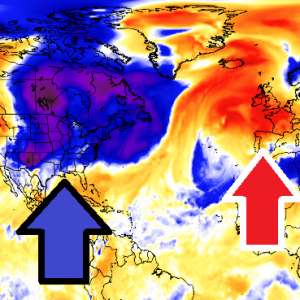 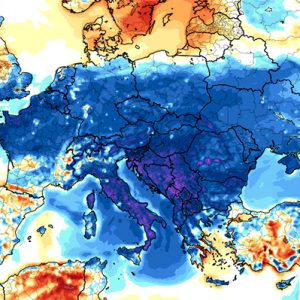 Global ocean analysis reveals three anomaly areas, which will have major impacts on weather in summer, hurricane season and even next winter!