Atlantic gets back to active dynamics soon as a new low-pressure system forms over the northeast US through mid this week and rapidly deepens over the Newfoundland and Northwest Atlantic on Thursday. The system will be then gradually moving into the North Atlantic and become very large, likely also introducing a very photogenic satellite presentation. A broad wind field will lead into the formation of a large swell, moving towards Europe this weekend.

The new system forms over the northeast US on Friday as an upper wave pushes from Canada. This leads to the rather rapid development of a surface low, organizing into a powerful system and expanding fast while moving into Northwest Atlantic on Thursday. Its center will likely be moving northeast to the north of Newfoundland by the afternoon and eject into the Labrador Sea on Friday. Models are then hinting a secondary low forming ahead of this system, centered near the southeast coast of Greenland on Saturday. The overall setup will develop a broad and strong flow towards western Europe. Additionally, there will also be another intense cyclone forming along the northeast US over the weekend and cross the Newfoundland on early Sunday.

Looking over the GFS model simulated IR brightness temperature (in other words – how the satellite would look like), model is hinting we could be seeing a pretty spectacular satellite presentation on Thursday and Friday while the system will be moving across the Northwest Atlantic:

The system will develop a broad field of strong gale to hurricane-force winds, spread across the whole Northwest Atlantic through Thursday and Friday. Over the weekend, the cyclone moves into the North Atlantic and so is its wind field gradually expanding towards Greenland, Iceland, and western Europe. It will likely develop a broad swell with high waves, but since it’s still relatively far in advance, more details on the effects towards Europe will follow later. 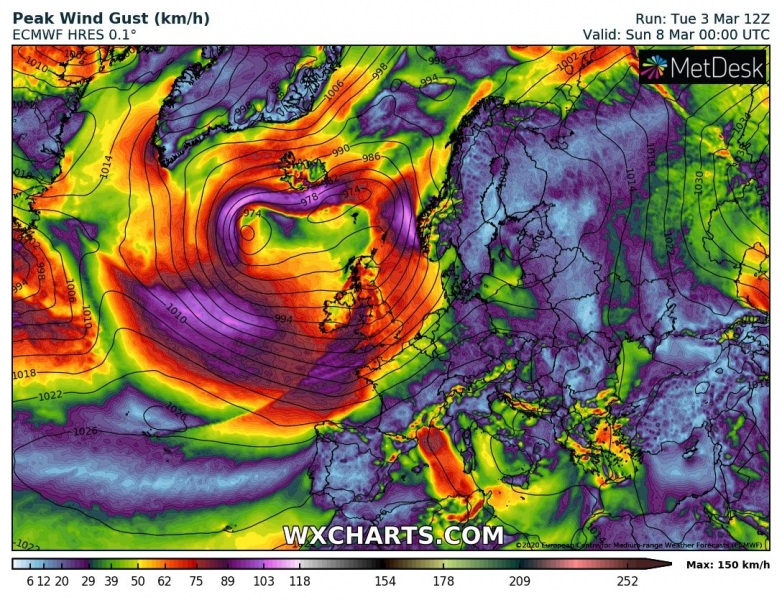 Here are the peak wind gusts swaths across the North Atlantic; we can see the system should develop a broad wind field from across the Northwest Atlantic towards Greenland and Iceland, later on also towards western Europe (likely on Sunday).

We are closely monitoring the system’s evolution and will keep you updated throughout this week – stay tuned!