The event occurred in the area which was under the severe threat yesterday, SLGT risk was in place across the Tennessee valley. At least 8 tornado reports so far. 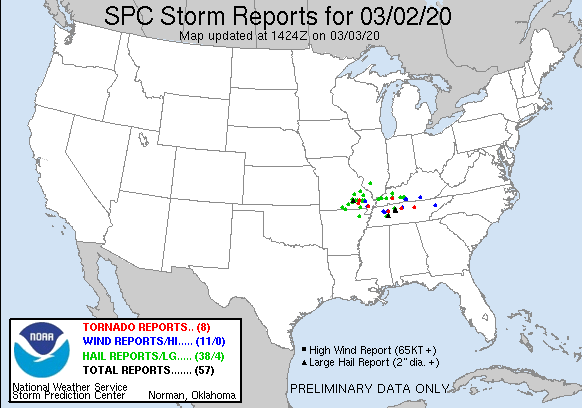 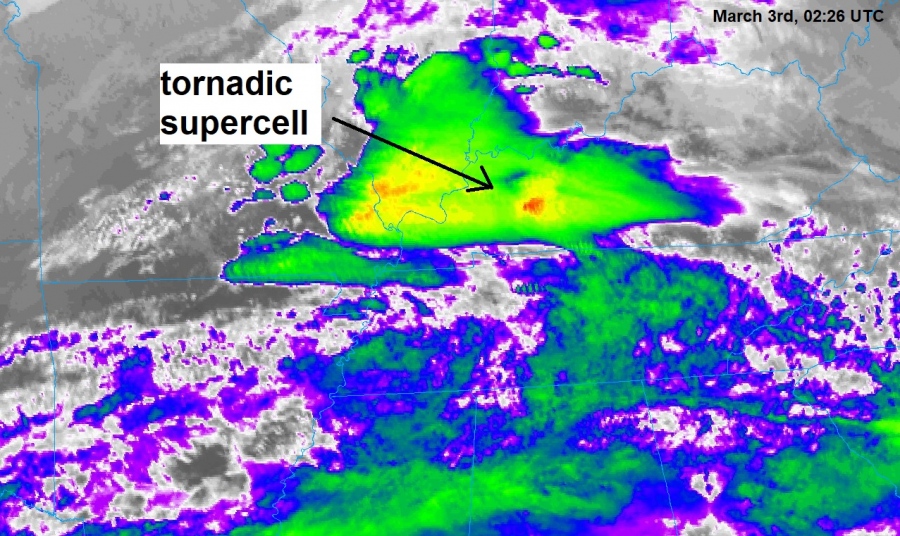 Numerous power flashes have been visible in the downtown Nashville while the tornado was ripping trough. Looking closely one can see the large cone of tornado as well:

This was the view from 5th & Main St in East Nashville as the tornado destroyed power lines and kicked up debris.

Just filmed a #tornado pass north of my building and just north of the state capital! Wow! pic.twitter.com/HUd40rvdsD

Downtown Nashville just experienced a #tornado. That was terrifying to watch from a distance! 🌪😳 pic.twitter.com/ov8C9zCDAX

Caught a twister passing through East Nashville on my nest cam! 🌪@DanielleBreezy pic.twitter.com/5XMdVTIFYh

Here are radar images and animations of the event while the deadly tornado was going through downtown Nashville. A well-defined debris ball signature has been registered on the radar scans – those are the flying debris within the tornado circulation: 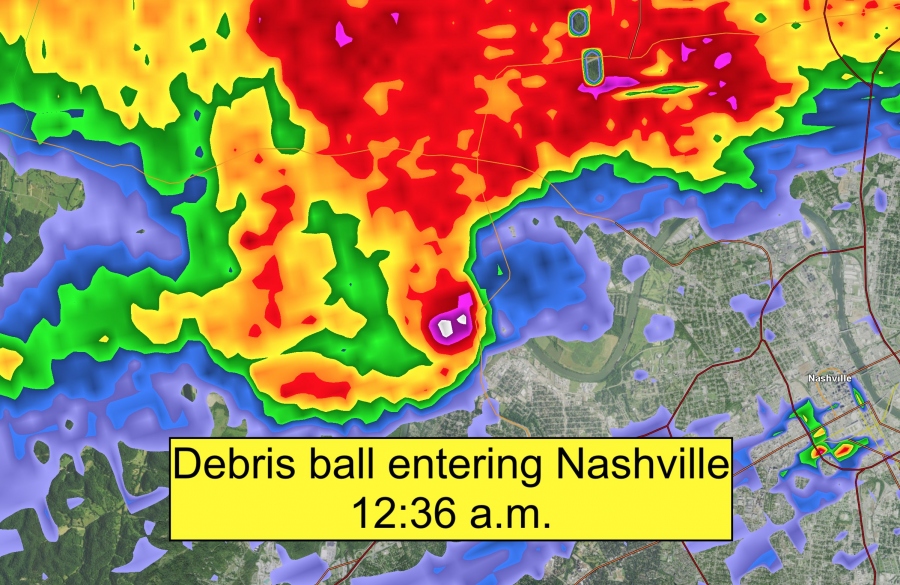 Here’s a Doppler radar & velocity breakdown of the storm as it moved through #Nashville. The tornado would loft debris high enough to be picked up on local radar, creating a “Debris Ball” radar signature! pic.twitter.com/TNo600X3uN

Good grief! Another closer look at the #NASHVILLE tornado just before 2am this morning. This radar is known as LEVEL 2 Reflectivity and it's rather revealing with this tornado strike. Gives me goose bumps. @FOX35ORLANDO @GoodDayOrlando pic.twitter.com/W5cijYhNT4

The first sign of debris with the #Nashville #tornado occurred at 12:36 a.m.

I saw evidence of debris with every radar scan until 1:36 a.m – exactly 1 hour later. Map is to scale.

Absolutely horrifying images on radar in/around #Nashville tonight. A violent tornado has hit the city in the late night hours, which is always a less than ideal scenario. pic.twitter.com/t5ngFLGSc0

Long-track highly tornadic supercell went right through #Nashville early this morning, and continues eastward. The rotation track is shown below between 12:30-1:30am Tuesday. Seeing lots of damage reports. Hopefully no injuries or worse. #TNwx #tornado pic.twitter.com/K7PReVCswS

Significant damage has been reported across downtown Nashville, from the Georgetown. More than 40 buildings weres significantly damaged. Attached are aerial and ground reports:

Absolutely devastating pictures coming out of #Nashville, #Tennessee this morning, as a large tornado ripped through the downtown area. Looks like the hardest hit was #Germantown. This is going to be a high-rated #tornado. Hoping for no injuries or worse. #TNwx pic.twitter.com/sW26ZnrFrz

Nashville Germantown area hit hard around 1 AM Central Time The 🌪 traveled along the I-40 corridor for miles early this morning 2 people confirmed dead #NashvilleTN #Tornado pic.twitter.com/4exCEUMJib

Praying for #Nashville this morning with the devastating news of a Tornado hitting Davidson County. #NashvilleStrong pic.twitter.com/6IvGvaEnGz

Note: This is the first review report as we are still collecting data and will be updating further – stay tuned!