Canada’s 4000-year-old Milne Ice Shelf has shrunk for 43% during a major calving event at the end of July 2020. Two massive chunks of the ice shelf, where the biggest one is larger than Manhattan, NY have been swept into the Arctic ocean.

The Milne Ice Shelf, a 4,000 years old shelf is a fragment of the former Ellesmere Ice Shelf, located in the Qikiqtaaluk Region, Nunavut, Canada. It is the second-largest ice shelf in the Arctic Ocean. The ice shelf had an area of about 290 square km (110 sq miles), in 1986. In 2020, its size was around 187 sq kilometers. At the end of July this year, around 43% of the sheet collapsed within 2 days period and swept into the Arctic Ocean. 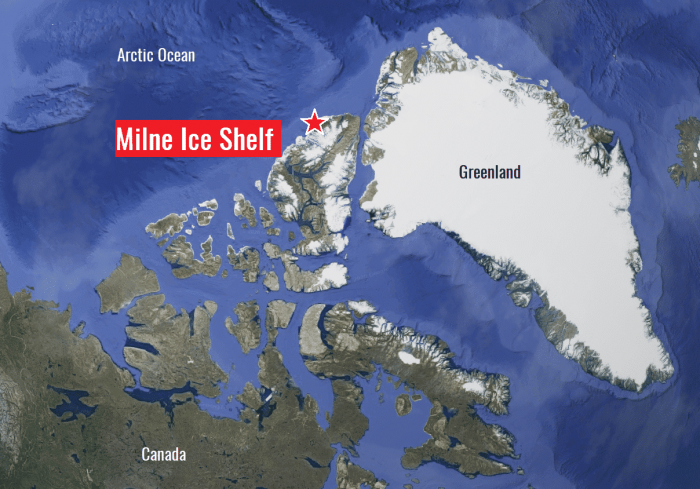 Satellite animation, from July 30 to August 4, shows the collapse of the last fully intact #iceshelf in #Canada. The Milne Ice Shelf, located on #EllesmereIsland in #Nunavut, has now reduced in area by ~43%. #MilneIceIsland #seaice #Arctic #earthrightnow #glacier pic.twitter.com/jjs1gawoxA

The Canadian Ice Service has stated that this event is a result of above-normal air temperatures, offshore winds, and open water in front of the ice shelf. A combination of these factors is usually needed for breaking off the ice shelves, causing big ice calving events. 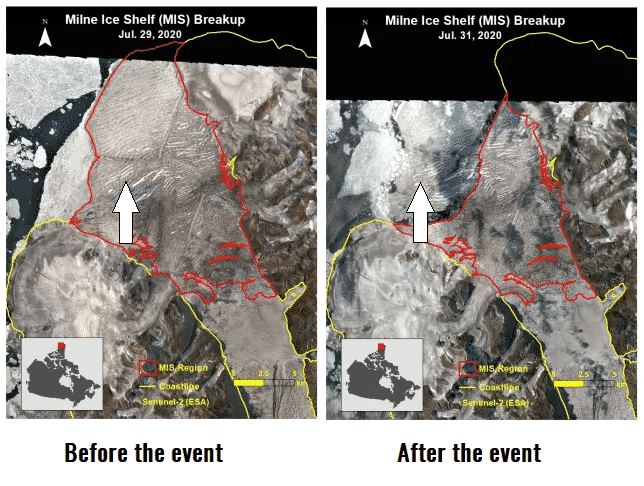 There are numerous cracks in the ice shelf visible from the satellite imagery. Therefore, the ice shelf is still unstable and further breaks are possible until the end of the North Hemisphere summer.

As reported by Water and Ice Research Laboratory, the northern portion of the Milne Ice Shelf calved between July 30th and 31st. The ice shelf was reduced from 187 km2 to 106 km2 and a large ice island drifted north into the Arctic Ocean. This ice island then broke into two parts by August 3rd — the larger one was 55 km2 and the smaller one was 24 km2.

“There was also a research site on the ice shelf which was damaged during this collapse of the ice shelf. The camp area and instruments were all destroyed by this calving event” said Derek Mueller, a professor in the Department of Geography and Environmental Studies at Carleton University. 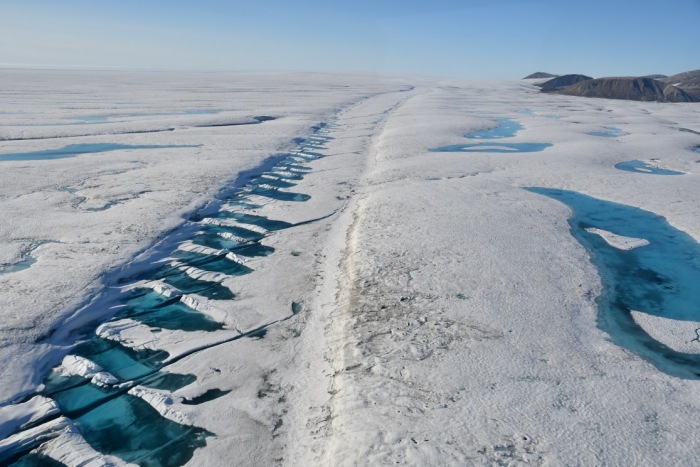 The rift in Milne Ice Shelf before the collapse. Photo by Derek Mueller

There were already several major ice calving events in recent decades. Ellesmere Island saw major ice shelf breakup events in 2003, 2005, 2008, 2011, and 2012. In 2010, a massive piece of ice about the size of Bermuda cracked off the Ward Hunt Ice Shelf, also on Ellesmere Island.

The Arctic region is warming up much faster than the rest of the world as strong Arctic heatwaves are impacting the region. It was very hot in July across the Arctic and Siberia. In our discussion a few weeks ago, we have attached the analysis of sea ice concentration change over the Arctic Ocean. Notice how significant is the sea ice decreasing on the Arctic Ocean side of Ellesmere Island. 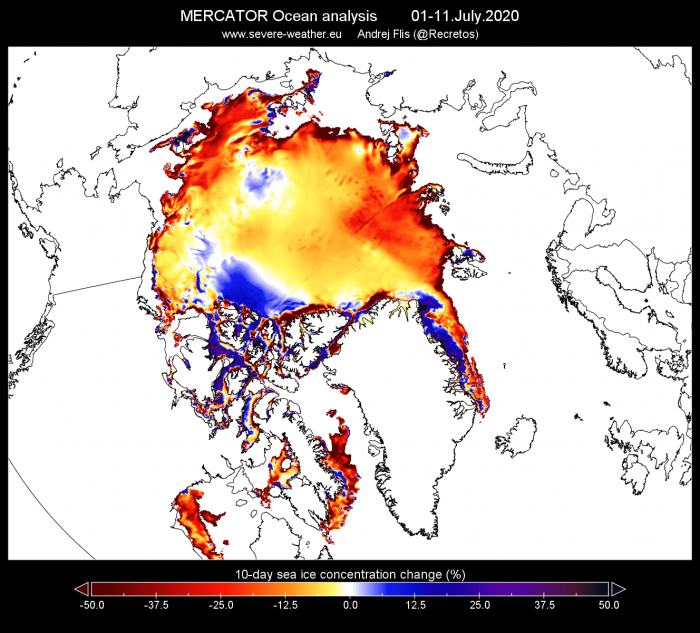 The Arctic heatwaves are also causing widespread wildfires in Siberia. Fires has been ongoing since June.