Record-breaking temperatures in the Russian Arctic region and Siberia continue to remain much higher than normal which has contributed to an increase of hundreds of wildfires. The Siberia wildfires coverage and burning land areas are now extending across nearly 3 million acres (= 1.2 million hectares). Smoke cloud is exceptionally large and pushed also towards the United States and Canada.

The Russian agency Avialesookhrana, responsible for the aerial forest fire management, has found that wildfire coverage is higher than usual and also much earlier. Thanks to the historic heatwave in June. 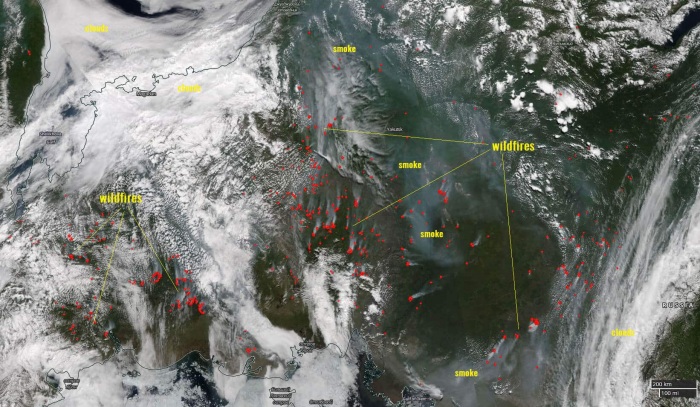 Around half of the forest coverage in Russia is located in remote areas where they are hardly accessed. Therefore, firefighters are allowed to let them rage the wild if fires don’t threaten nearby towns with residents.

The average temperature in Siberia was nearly 10 °C above normal for the first five months of 2020! The region is warming at a much faster rate than simulated in response to rising levels of carbon dioxide and other greenhouse gases. And this warming is leading to a rapid meltdown of the permafrost and an increase in wildfires.

While numerous wildfires are common over Siberia during summer months, the record-breaking temperatures and often strong winds are resulting in the environment particularly dangerous with uncontrolled fires across a hundred thousand hectares. 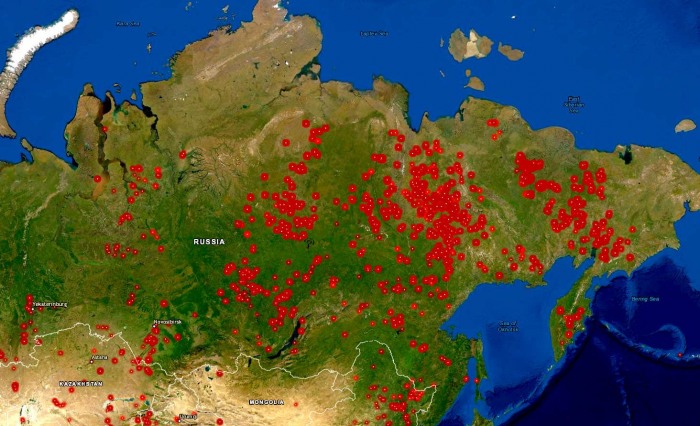 There are at least 150 large active fires ongoing right now. And conditions are worsening daily. The coverage of these sometimes zombie fires is much higher than normal.

Another dangerous part of the warming in Siberia’s Arctic region is that there are huge amounts of carbon in permafrost, which can be unleashed during periods of fires like this.

The video animation shows the transportation of smoke cloud across the northern hemisphere, tracking the smoke transport from Siberia. We can also see a high density of local smoke/smog particles in India and China:

It has been particularly hot throughout the month of June, with many regions reaching new all-time temperatures. Many areas are on fire. Attached is the ECMWF satellite scan of land surface temperatures. The land of Siberia is literally overheating. 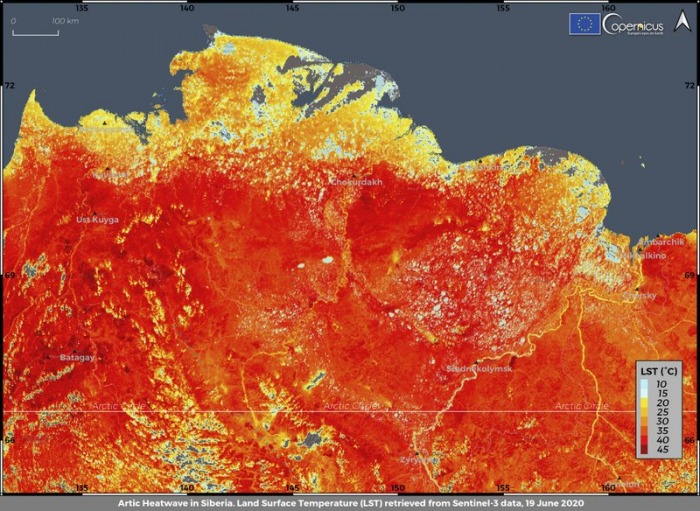 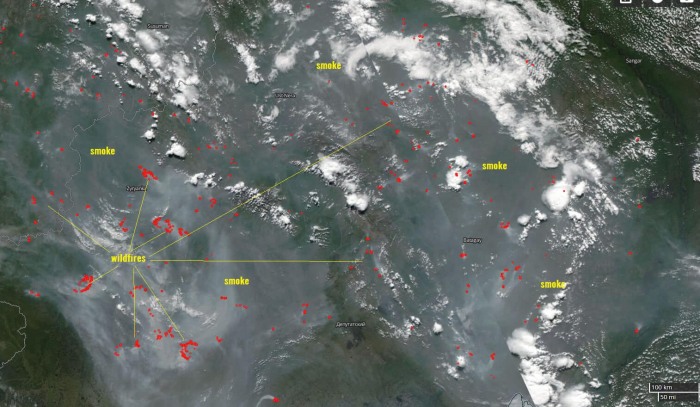 A closer look from the high-resolution satellite imagery reveals some details on the smoke cloud. We can clearly see the wind direction, pushing smoke cloud downwind from the raging fires. 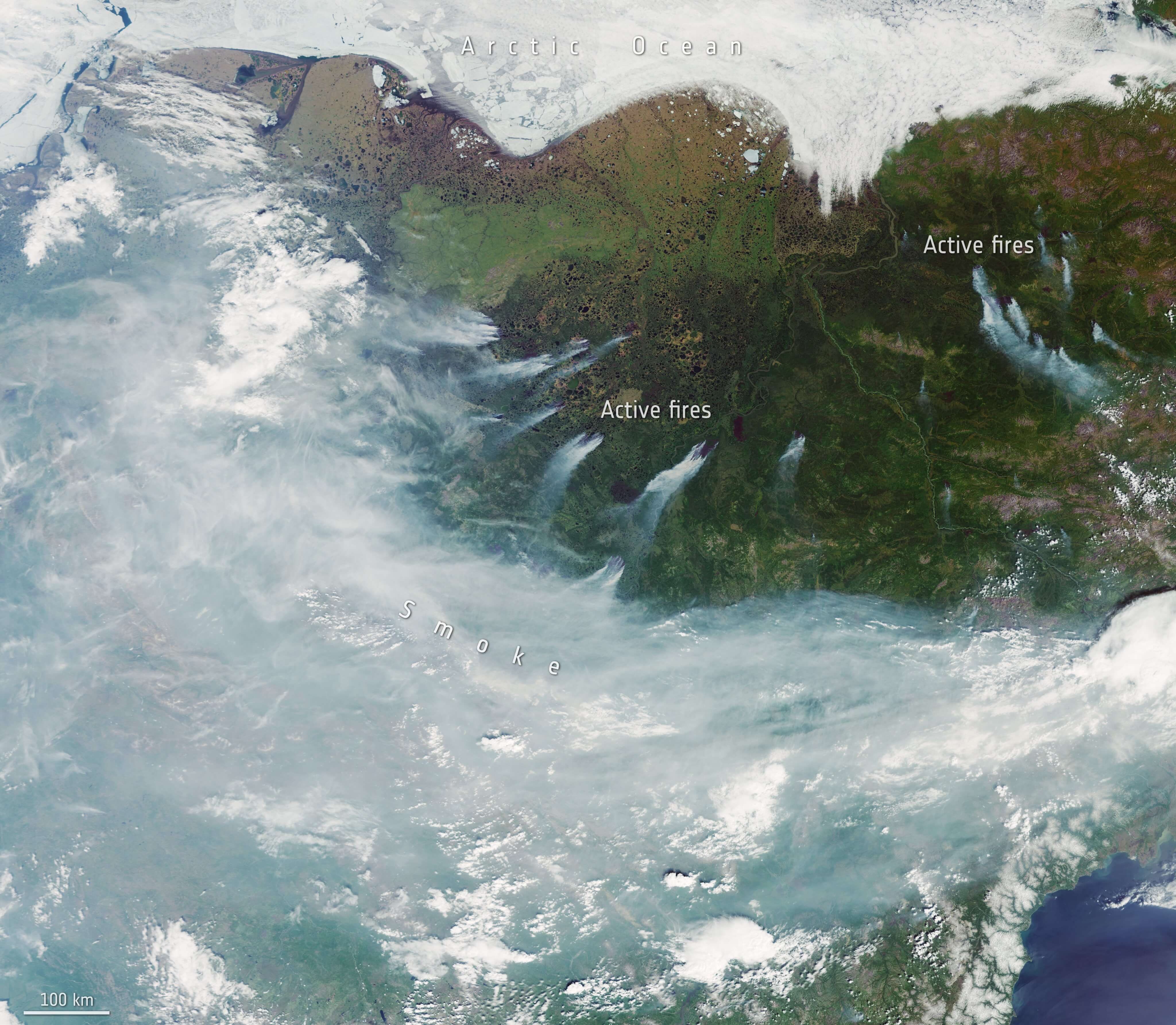 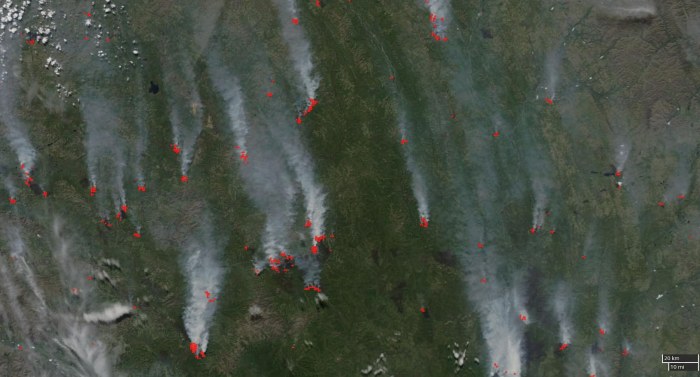 The worst situation is the area around Verkhoyansk, the Sakha Republic, with more than 2.3 million acres of forests burning.

#Wildfires continue to burn in #Siberia during a notable heat wave in the region as the #Himawari8 satellite, operated by our partners @JMA_kishou, watches from above. Russia’s forest fire aerial protection service says the fires have grown nearly fivefold over the past week. pic.twitter.com/OEbWC3gQuE

The prevailing westerly winds should maintain the smoke cloud extending across Siberia, the Barents Sea into Alaska. Also reaching western Canada and the north-northwestern United States. Attached are the forecast maps for Thursday and Friday this week. 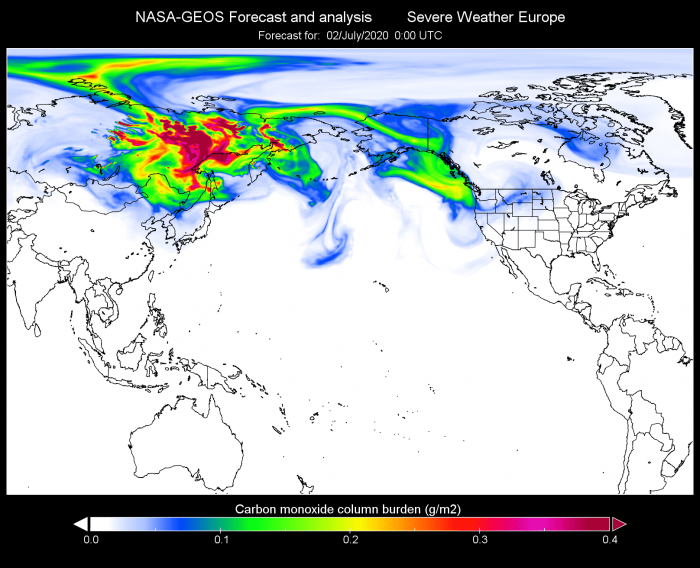 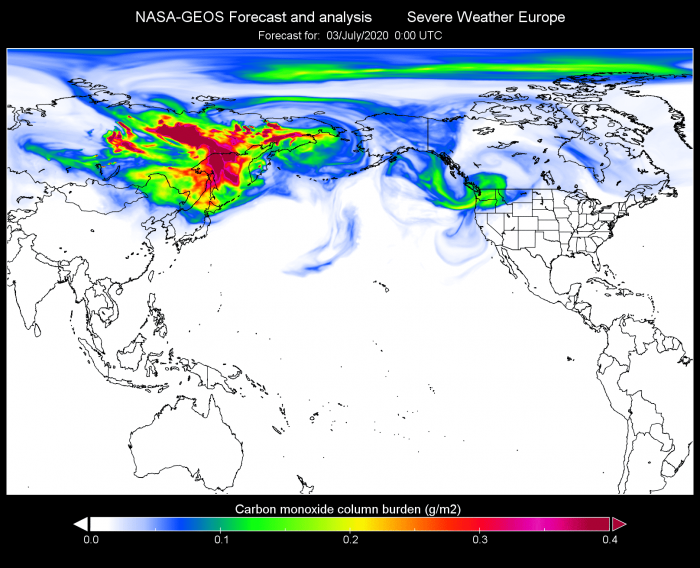