>>Saharan dust cloud UPDATE (June 26th): The dust has now reached the southern USA, and will remain over the region until early next week.<<

Such strong dust storms are more commonly known as SAL (Saharan Air Layer). The Saharan Air Layer is a mass of very dry, dusty air that forms over the Sahara Desert during the late spring, summer, and early fall. It moves over the tropical North Atlantic every three to five days, with some events reaching very high volumes of dust. 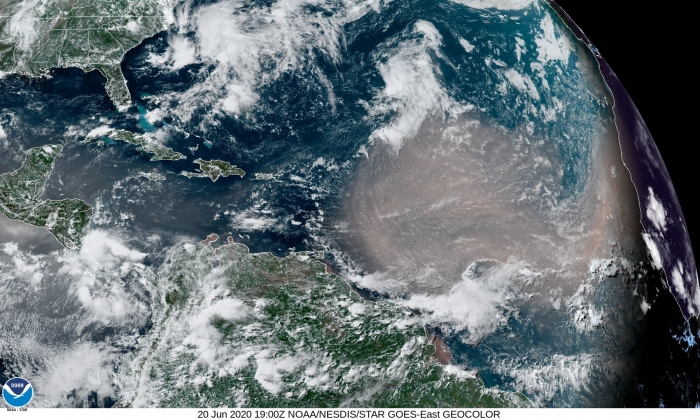 The satellite analysis from EUMETSAT also shows the massive dust cloud from another perspective. The bright pink colors highlight the large dust cloud extending from the Sahara Desert into the Atlantic.

The Saharan Air Layer is warm, stable, and very dry, as it has about 50% less moisture than the typical tropical atmosphere. This warm and extremely dry air can weaken a tropical cyclone or a tropical disturbance and prevents the formation of thunderstorms. The satellite air moisture analysis reveals the large Saharan air layer, and we can see that there are no thunderstorms inside this dust cloud. There are however storms right on its edges, where the conditions still allow thunderstorm formation, but not inside the dust cloud. 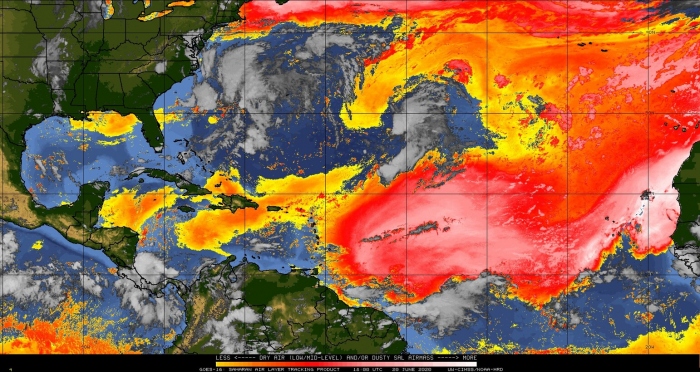 Research shows, that iron-rich particles inside these dust storms reflect sunlight, thus cooling the atmosphere. The particles also reduce the amount of sunlight reaching the ocean, which reduces the heating of the ocean surface, while the dust cloud is passing over.

We produced a forecast animation, which shows the movement of this massive dust cloud across the Atlantic in the coming days. The dust cloud is expected to reach the southern United States by the end of the week, after moving over the Carribeans.

Wind transports these dust clouds across the Atlantic. So if we want to know where this dust cloud will move next, we need to look at the pressure and wind forecasts. The current ECMWF forecast shows the prevailing easterly winds, which transport the dust further west. The second image is the Dust forecast from the NASA GEOS-5 model. 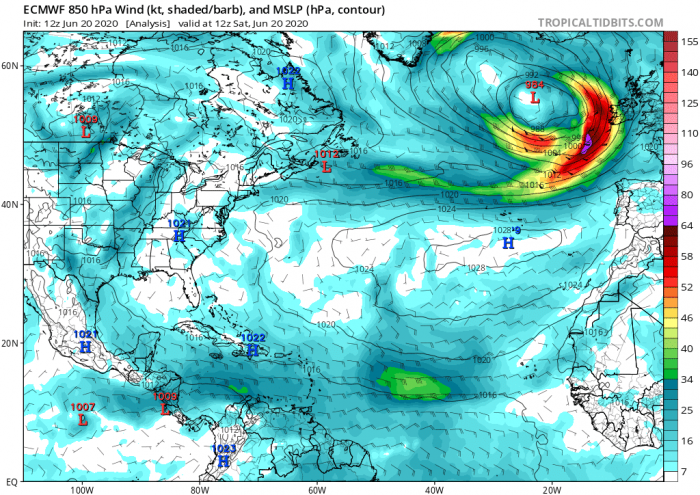 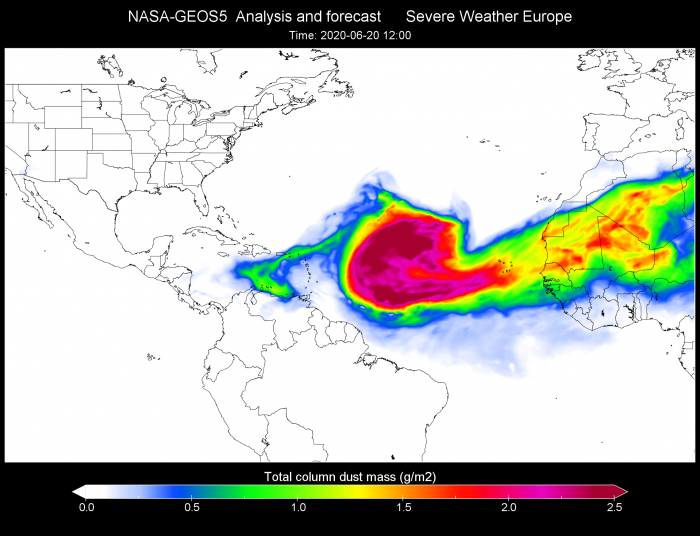 The dust plume has already reached the Lesser Antilles today (June 20th). The image below is from Bardabos (via @ArcaneWx). It shows massive dust concentrations, in an otherwise clear sky, with only a few low-altitude clouds. The Sun (lower left) is almost blocked out by the dense dust layer. 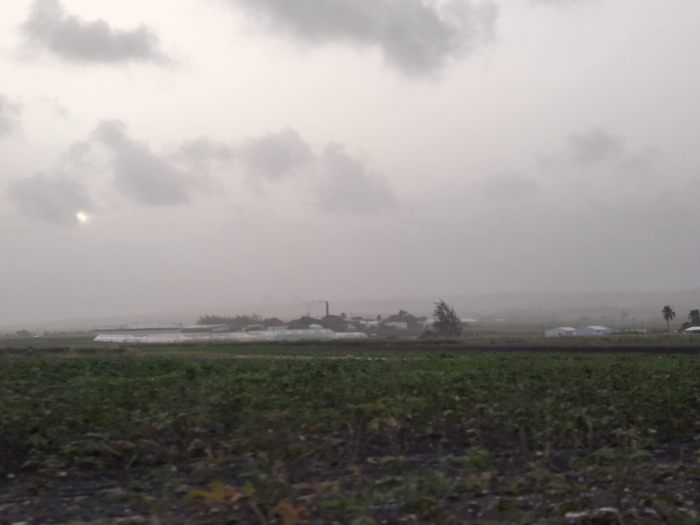 By mid-week, the core of the dust plume will move over the Caribbeans and enter the Gulf of Mexico by Thursday. 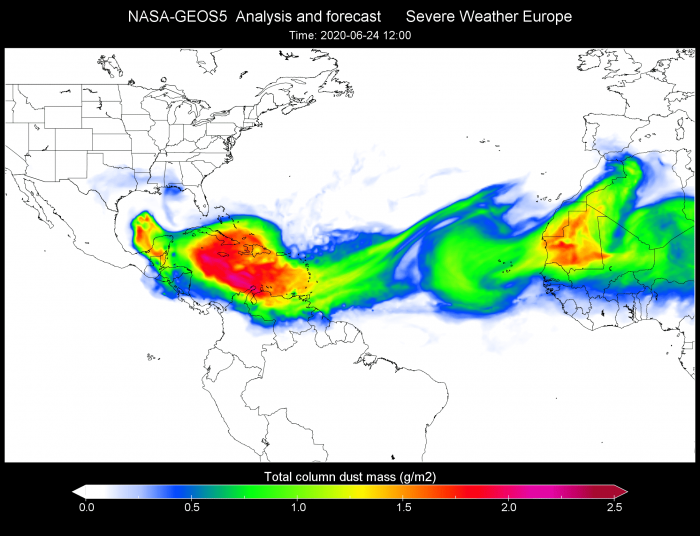 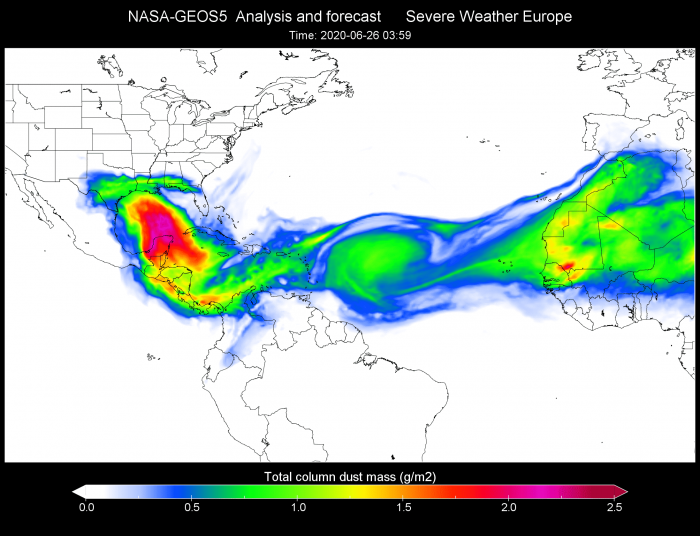 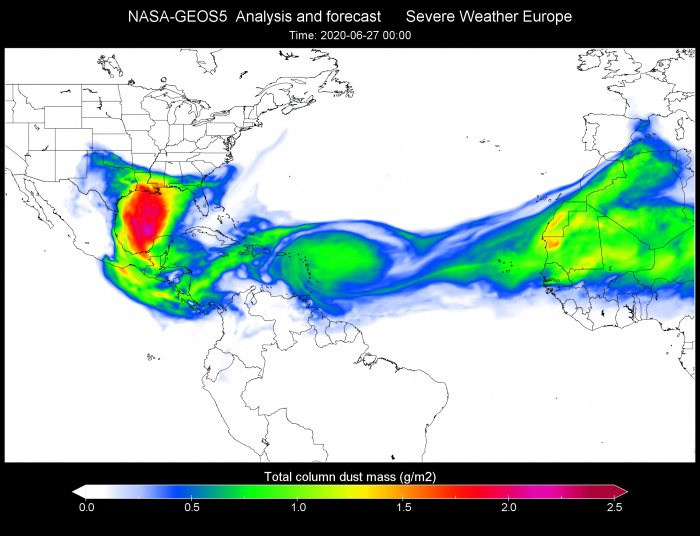 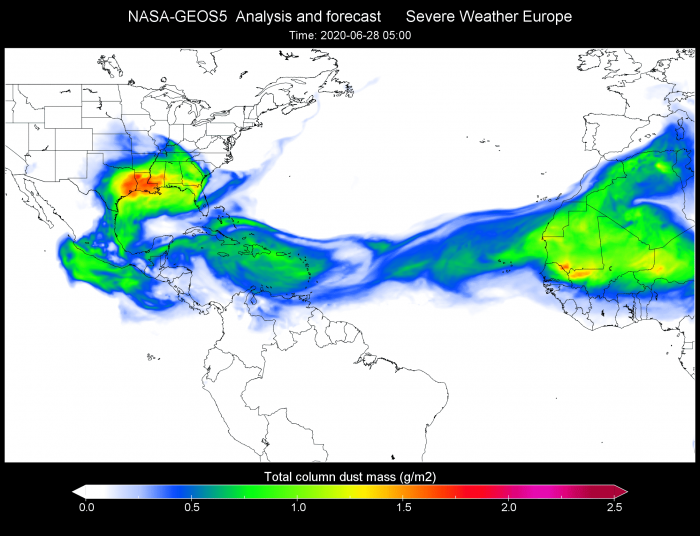 Such a large dust cloud can cause a change in weather, as it brings drier and more stable air, meaning less precipitation. Fine dust particles can act as a natural fertilizer, so it is beneficial for the soil. Saharan dust clouds also suppress tropical activity, which means a lesser risk for tropical storm development and landfall during its presence. Dust particles in the atmosphere will help to create beautiful, vivid sunrises and sunsets, as the dust particles scatter the light.

On the negative side, the fine dust particles can significantly reduce air quality, degrading vision, causing eye irritation and can also cause sinus and respiratory problems. This is not a good development, as the Covid-19 epidemic is still ongoing in many states in the southeast. Fine dust particles can cause complications for individuals that have the Coronavirus infection if the dust is inhaled in higher concentrations. The dust concentration is not currently shown to reach very dangerous levels, but the latest forecasts have slowly increased the predicted dust amount over the United States.

We will keep you updated on the development of this massive Saharan dust plume, as new data is available soon.