The Saharan dust cloud has now reached the Gulf of Mexico and the southern coastal areas of the USA. Unhealthy concentrations of PM 2.5 particles are already being detected across the southern states. Latest forecasts show a new dust cloud following behind early next week.

In our previous article, we discussed the start of a Saharan dust cloud event, which has now reached the coastal areas of the United States. The International Space Station has captured a stunning photo of the dust cloud as it crossed the Atlantic ocean on Sunday, June 21st.

The GOES-16 satellite imagery shows a large dust cloud currently moving across the Yucatan peninsula, extending over the Gulf of Mexico into the south coast of the USA. Behind we can see a new dust cloud coming from the Atlantic, which will also reach the south coast after it crosses the Carribeans again.

A closer satellite look reveals a very dense dust cloud, with the highest concentration extending from the Yucatan to the south coast of the United States.

The NASA-GEOS5 forecast also shows the same area of the highest dust concentration. The Caribbean is mostly out of the main dust plume cloud, but a new dust wave is rapidly approaching from the east.

Airmass/moisture analysis from the GOES-16 satellite, shows the dust plume turning towards the United States. A new dust cloud is nicely visible and will follow along the same path in the coming days. 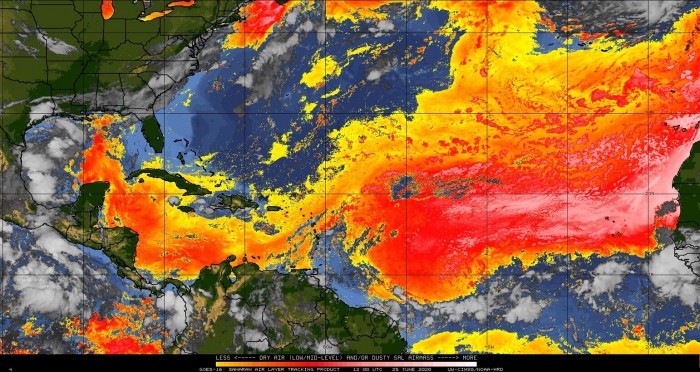 We produced an updated high-resolution dust forecast video, which shows the movement of this massive dust cloud in the coming days. The dust plume is expected to linger over the south and the southeast USA until Tuesday.

Such a weather pattern will persist for a few days, which will lock the dust cloud over the southern states. The dust cloud will finally start moving back out into the Atlantic on Monday, leaving Florida as the last state affected by the dust. 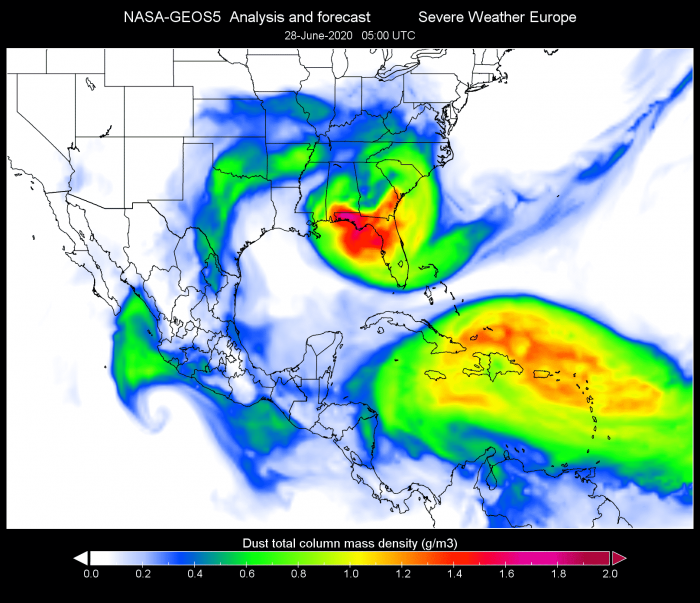 As we can already see on the two images above from the NASA-GEOS5 forecast, a new dust plume is approaching the same region as the current one. It will already move over the Caribbean on Tuesday, mixing with the first wave, which will already be moving out at the time.

The second wave is currently expected to mostly affect the Texas and Louisiana area. The dust concentration of the second wave is forecast to be quite lower than the first one. So apart from possible optical effects with sunlight, it should mostly not be a cause for concern. We do have to add that these forecasts are not as reliable so far out into the future. The first (current) Saharan dust cloud was also forecast as a low concentration event but is currently showing quite higher concentrations than the first forecasts.

Below is an image from EPA, which shows the latest air quality observations. The monitoring stations have detected an increased amount of fine particles (PM 2.5) over the southern coastal areas. The concentrations are slowly increasing as the dust cloud is moving inland, with the entire region having moderate pollution. A few areas marked in orange go higher, with concentrations that are marked as “unhealthy for sensitive groups”. Such conditions are likely to persist over the weekend, as the dust slowly subsides and moves back into the Atlantic early next week.

Such a large dust cloud can also cause a change in weather, as it brings drier and more stable air, meaning less precipitation. Fine dust particles can act as a natural fertilizer, beneficial for the soil. Saharan dust clouds also suppress tropical activity, which means a lesser risk for tropical storm development and landfall during its presence. Dust particles in the atmosphere will help to create beautiful, vivid sunrises and sunsets, as the dust particles scatter the light.

On the negative side, the fine dust particles can significantly reduce air quality, degrade vision, cause eye irritation, and can also cause sinus and respiratory problems. Fine dust particles can cause complications for individuals that have the Coronavirus infection if the dust is inhaled in higher concentrations. The dust concentration is currently not expected to reach very dangerous levels. But the latest observations show an increase in PM 2.5 particles, which can be unhealthy for sensitive people with respiratory problems.