A northeastern Siberian town Verkhojansk likely set a record for the highest temperature ever documented in the Arctic Circle. A historic heatwave has developed over Arctic Russia this month – Siberia is literally on fire! The fire season started earlier. Additionally, extreme heat with temperatures near or above 35 °C is expected to continue through the end of June, leads to faster permafrost melt.

The preliminary all-time record of 38.0 °C (= 100.4 °F) at Verkhoyansk in Siberia, Russia could be the new hottest place on record within the Arctic Circle. Verkhojansk is located in northern Russia at the latitude of 67.55 ° North. If this temperature value will be officially confirmed, it would not only be an absolute heat record at the station but also the highest temperature ever observed north of the Arctic Circle!

The previously known heat record for the town of Verhojansk was +37.3 °C, recorded on July 25th, 1988. Here are some details on the heatwave from that month:

Verhojansk is a small Russian town in eastern Siberia known for its exceptionally cold winters. The town also holds the Guinness world record for the greatest temperature range on Earth: 105.8 °C (= 190.4 °F).

The existing heat record of the Arctic Circle is the 100.0 °F from the year 1915, taken at the Fort Yukon, Alaska station in the United States (source: NCDC).

A large part of Russia – Siberia has experienced unseasonably high temperatures this year. Looking over the global temperature departures from the long-term average (1951-1980) between January and May 2020. The temperature anomaly across our globe has been positive, but notice the outstanding surplus over Siberia. 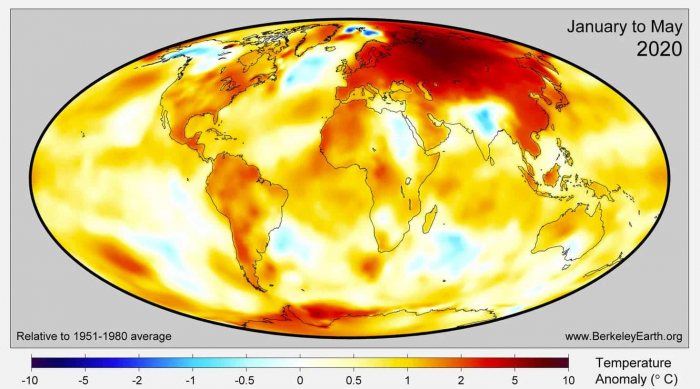 Heatwave leads to an acceleration of the melting of ice and started the wildfire season unusually early. The above normal weather also contributed to permafrost melt, led to a major oil spill in early June.

The past weekend has been exceptionally warm. On both Saturday and Sunday, June 20th and 21st, peak afternoon temperatures significantly exceeded 35 °C threshold in several stations across the Arctic circle in northeastern Siberia. The record-breaking heat record of 38.0 °C (=100.4 °F) is marked – that is the Russian town of Verhojansk. 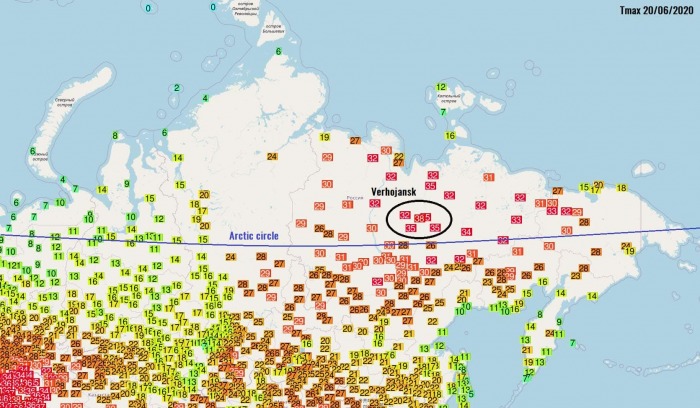 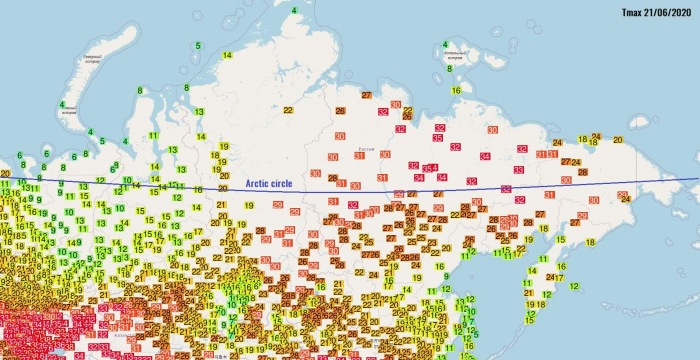 An extreme heatwave over Siberia is expected to continue this week, through the remainder of June. Air mass is significantly warmer than a long-term average, more than 20 °C above normal at the time. Attached are the 2 m temperature anomaly maps through this week, from Monday to Sunday. Therefore, most of the days will easily reach 30-35 °C again, even higher in some areas! 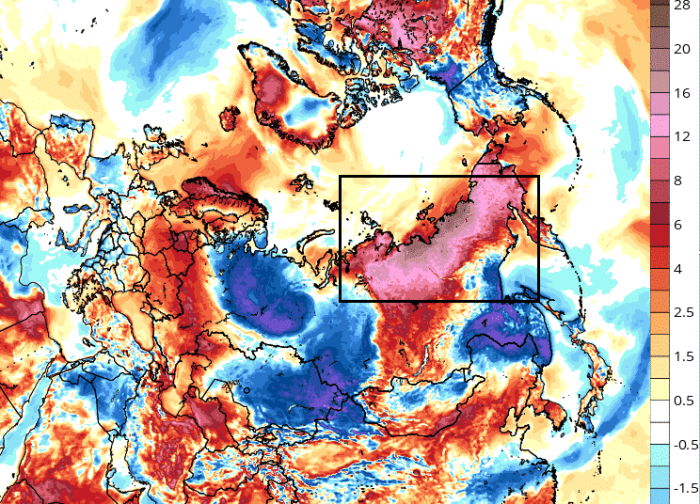 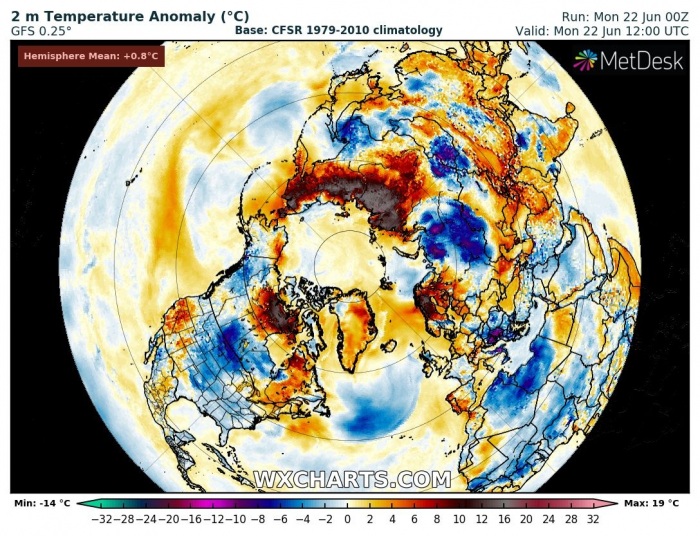 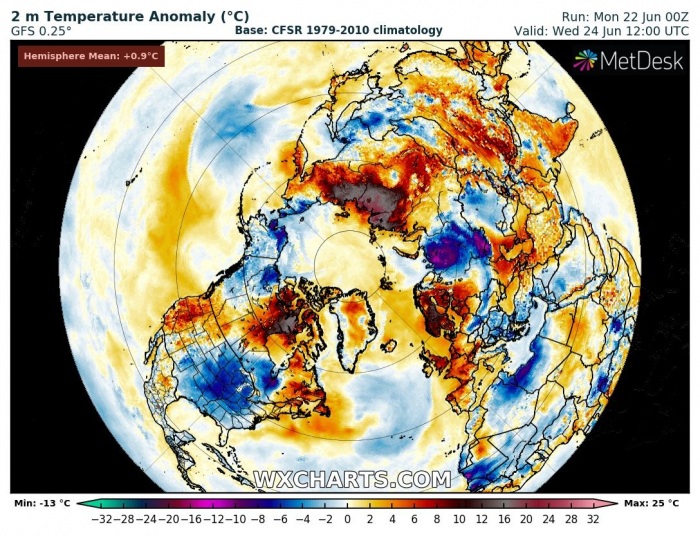 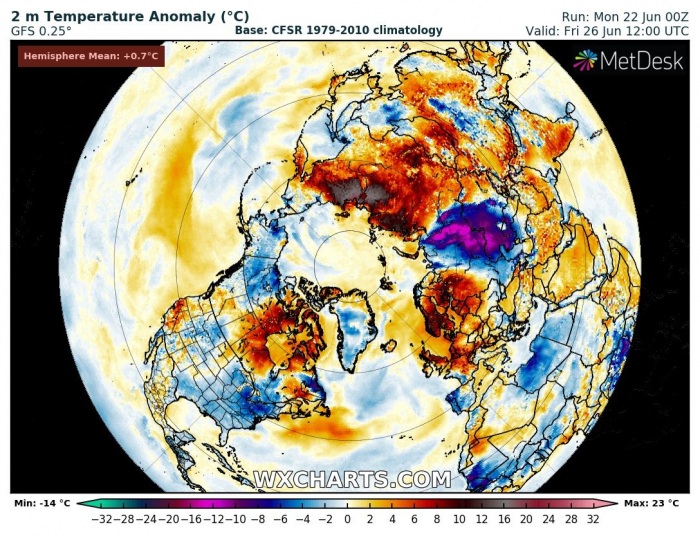 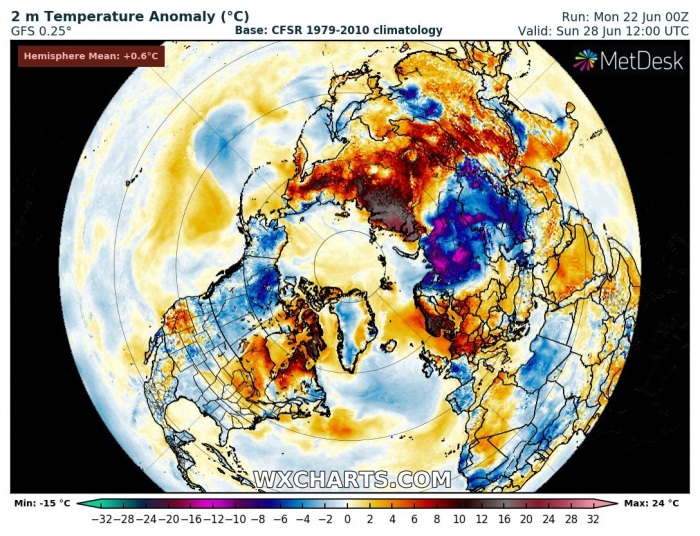 Notice there is also a developing heatwave across part of Europe this week – stay tuned for details on this soon.