A record-breaking scorching heatwave is lasting for days, thanks to a persistent heat dome that has developed over the West Coast of the United States. Death Valley is known to be the hottest place on the US territory, and the official record of 130.0 degrees Fahrenheit (= 54,4 °C) on Friday was only the fifth time in the station’s recorded history. And the records go for almost 150 years.

Death Valley might be in focus as it hit these extreme temperature records this weekend, but it is not the only spot suffocating under a heatwave. The heat dome is basically stretched across a large part of the West Coast and desert Southwest. Temperatures are exceeding 122 °F (= 50 °C), challenging all-time records. 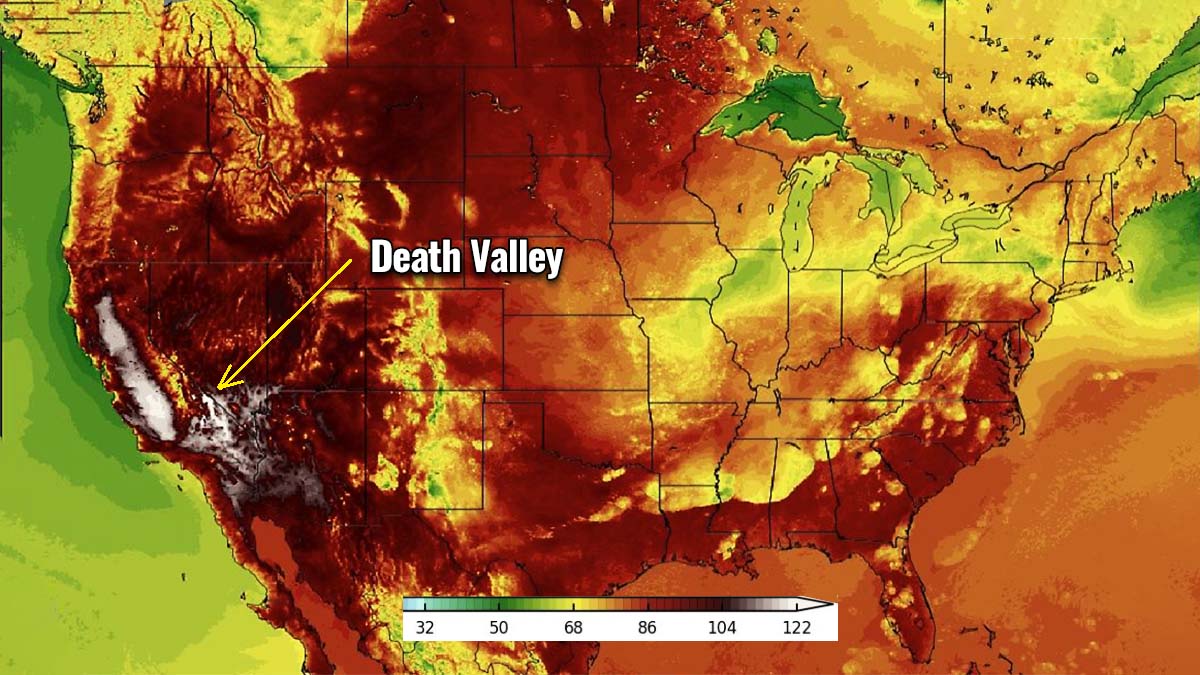 Excessive Heat Warnings are in effect for more than 30 million people in the western United States. Many across California, Nevada, Arizona, and Utah are experiencing triple-digit °F temperatures. 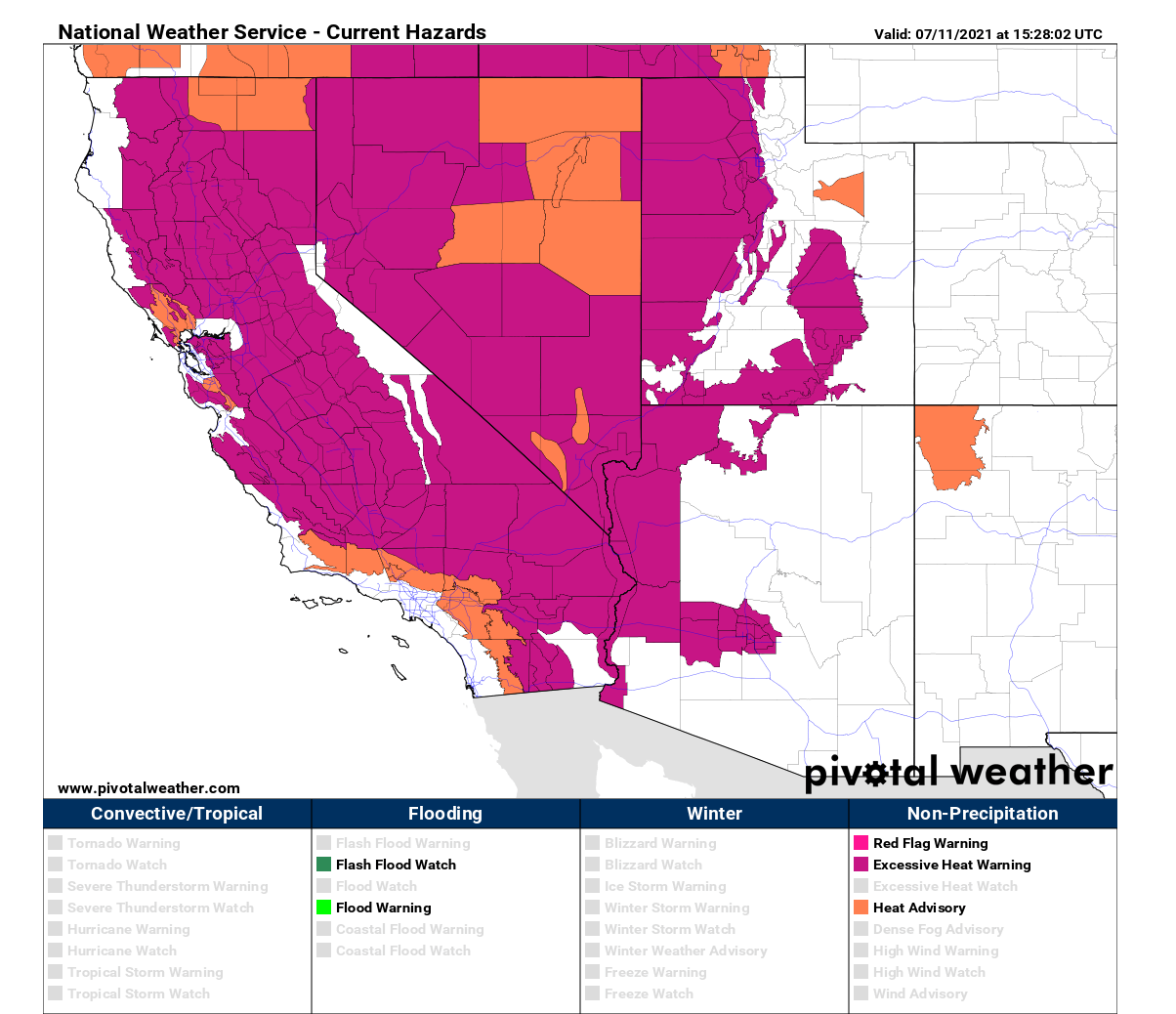 The next night brought the minimum of 99 °F, followed by very high temperature the day after, Saturday, July 10th. The official highest temperature in Furnace Creek, Death Valley was just a shy lower than Friday’s, it was 129.4 °F (= 54.1 °C) 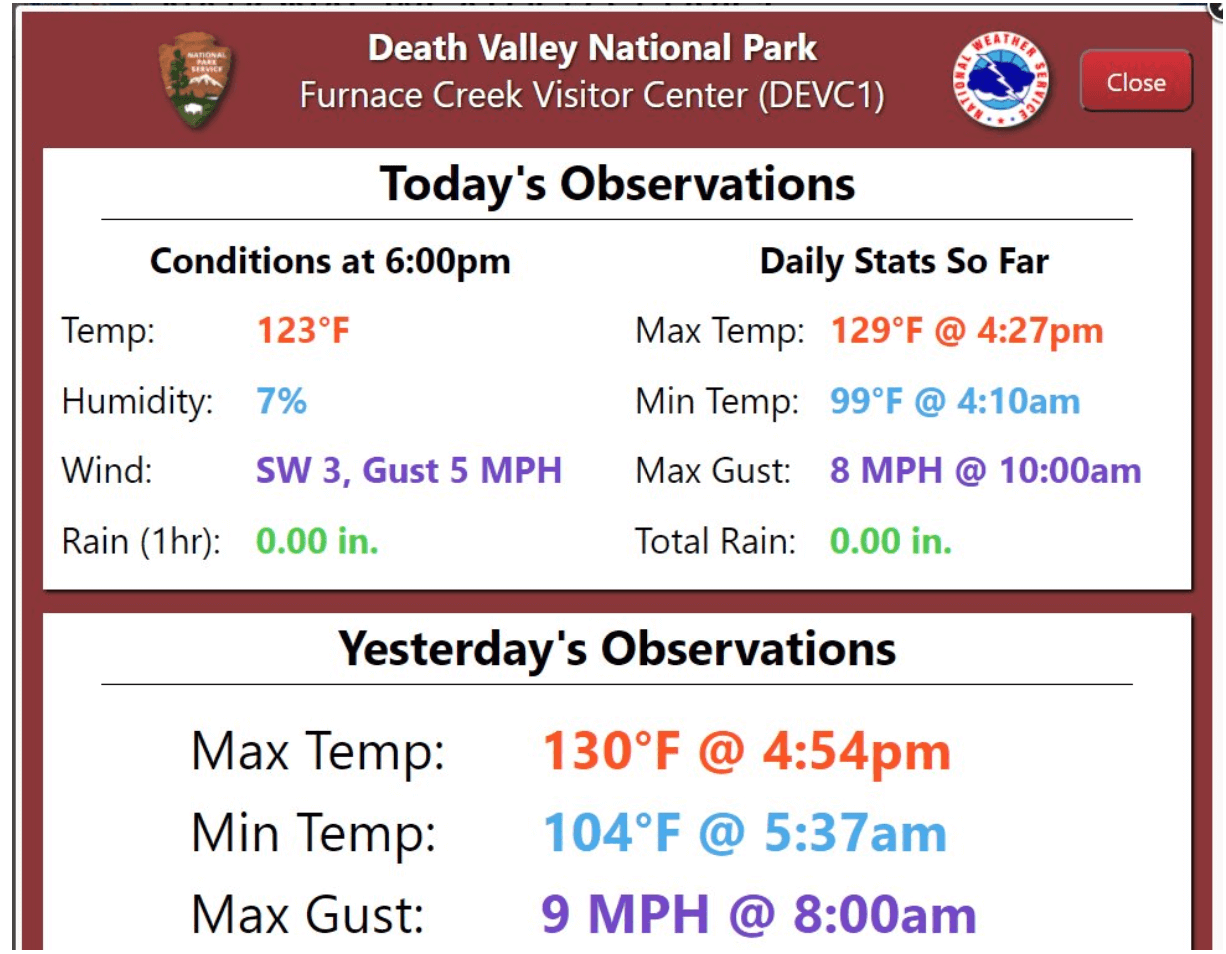 And both Sunday and Monday could see these temperatures again, possibly even a tad higher. The high for Death Valley on Sunday could be between 129 and 131 °F, 54.1 to 55.0 °C. Attached below is the 1-hour timescale animation of 2 m temperature across the United States and the desert Southwest.

There is also another statistical record that hints at how extreme the ongoing heatwave is. US meteorologists also track the record for the number of consecutive days at 125 degrees ( 51.7 °C) or higher. The existing record is 10 and was set back in 1913, lasting from June 28 through July 5th.

This summer, Death Valley recorded 126 °F on July 7th and daily maximum temperatures have not been lower than this since then. So as the heatwave is expected to continue these 125+ F days at least until Tuesday, this would be 8 straight days. By Tuesday, this would be the second-longest streak in recorded history, tying eight days of above 125 °F set in 2013.

The reason behind these extremely hit days is usually the persistent weather pattern, known as the heat dome that develops over a large scale in various parts of the world.

WHAT IS A HEAT DOME and WHY IS IT IMPORTANT FOR THE HEATWAVE?

The source behind the long-lasting and extreme heatwave is usually a heat dome. An area of high pressure that parks over a large geographical region like a lid on a pot, trapping heat underneath for days. 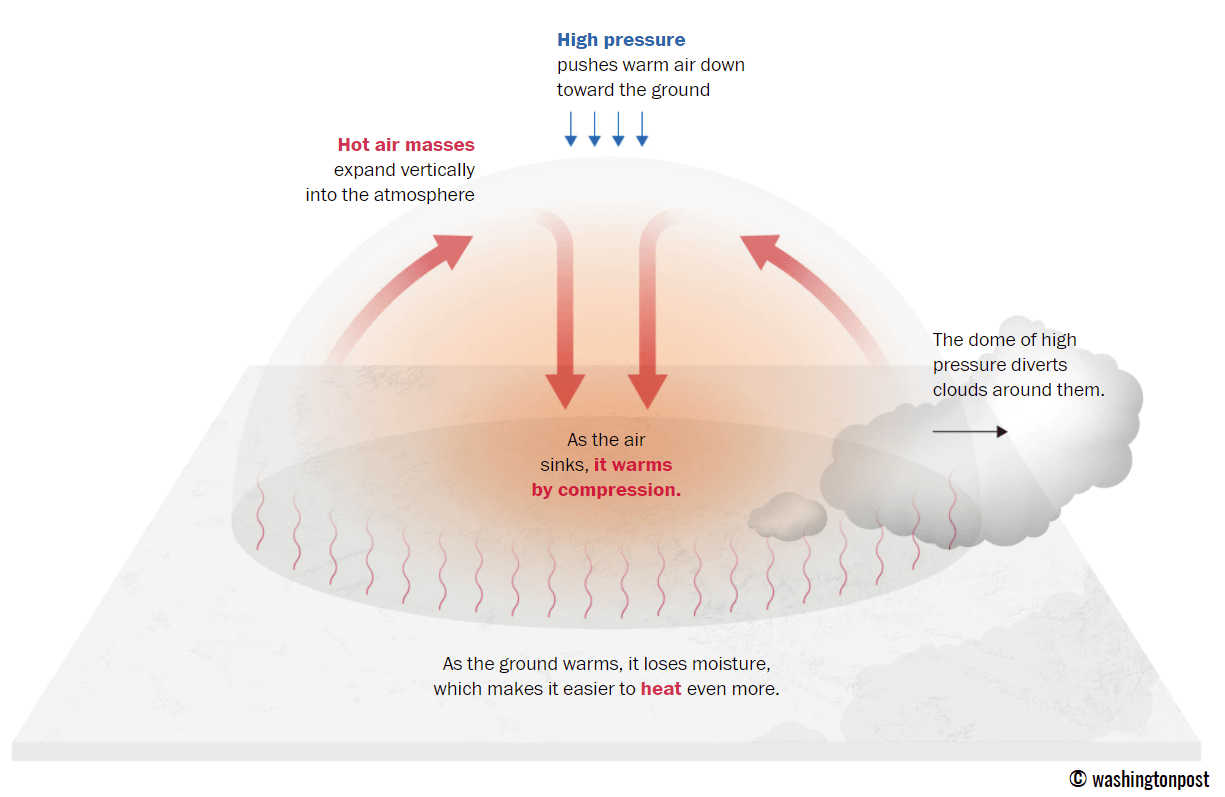 So a heat dome is basically that trapping dome of heat beneath the extensive blocking upper-level ridge and the surface high-pressure system. A stable air mass begins to accumulate and develops the heatwave that normally lasts for several consecutive days and nights. And the temperatures during a heatwave are typically much above normal, even challenging heat records.

If the heat dome is very strong – such as the Pacific Northwest of Canada and the United States was facing at the end of June this year or the ongoing heatwave in the desert Southwest currently – this large lid helps to sustain the scorching heat at the surface. This happens when a high-pressure system fully establishes through all the layers of the atmosphere, and the subsiding air beneath it heats the lower atmosphere. 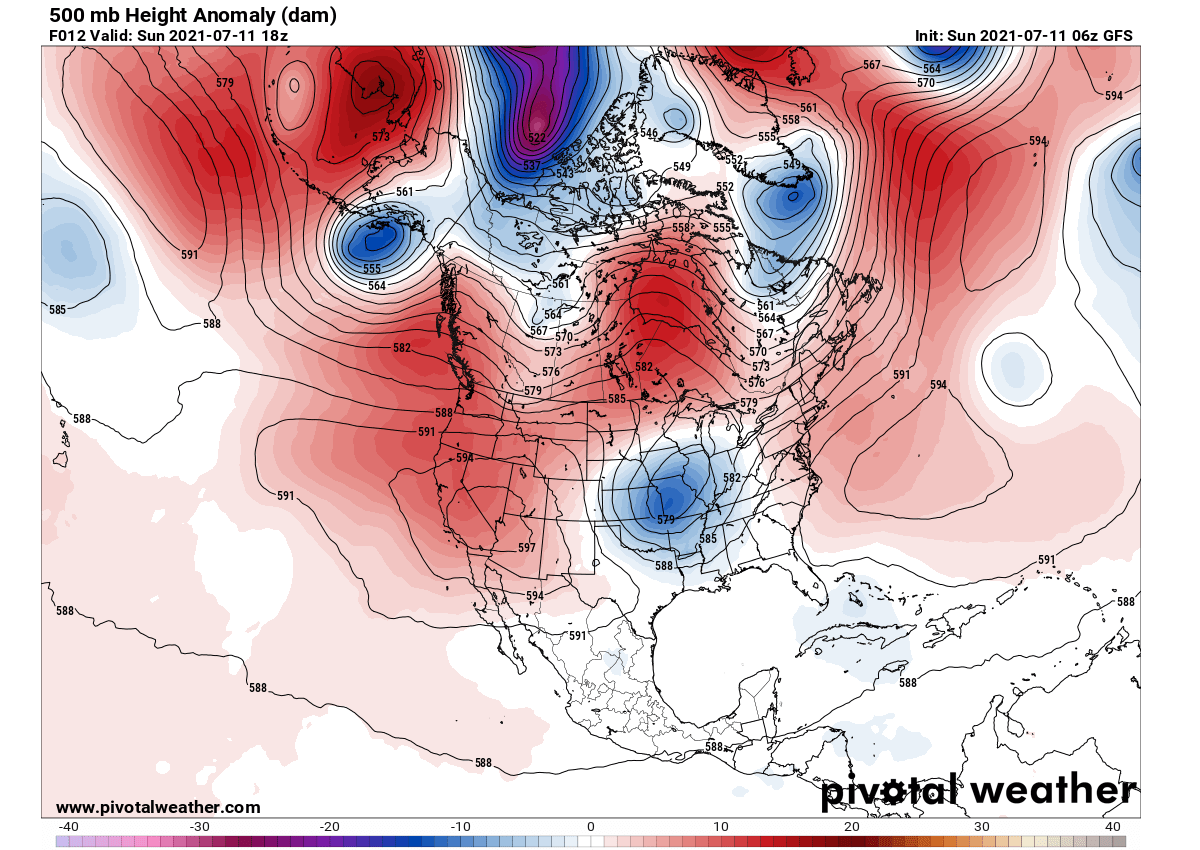 The hot air masses also rise vertically into the higher atmosphere, creating a so-called dome of high-pressure area, trapping everything below. Once again, similar to the event in the Pacific Northwest last month, an unpreceded record-breaking heatwave is resulting.

The heat dome over the Western United States and Canada normally happens during the mid-summer, and that is why most of the heat records are made during the month of July. But to get so extreme temperatures there have to be just right conditions aligning together – a lack of winds, very low moisture content, and a powerful heat dome trapping all the air masses beneath the blocking high.

Death Valley is believed to be one of the hottest and driest places on Earth. Thanks to the shape of the valley and its location relative to mountain ranges, specific conditions develop and help the temperatures to climb extremely high for days. 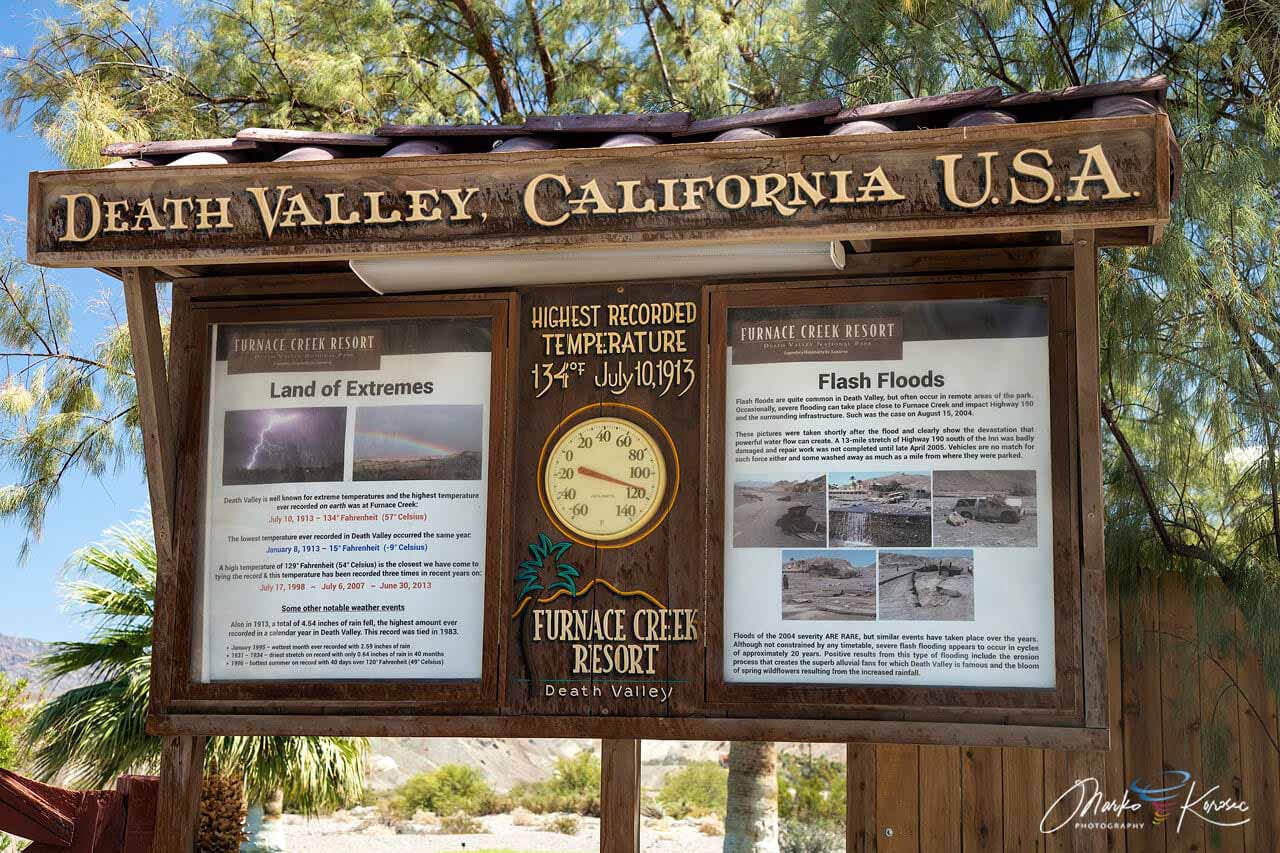 The valley is ‘shaded’ by four mountain ranges to its west, which helps the moisture coming from the Pacific Ocean to evaporate almost completely until it reaches the Death Valley. There are barely any clouds on many days during summer when the heat dome dominates the US desert Southwest.

And the mountain ranges around the valley are also acting as walls around the Death Valley basin. When sunlight heats up the valley’s dry surface (there is almost no vegetation except the Furnace Creek resort), the solar radiation gets trapped by these steep mountain slopes around and it bakes the basin even more.

The weather station of Death Valley is located in the Furnace Creek resort. The station sits at 190 feet (58 meters) below sea level in the Mojave Desert of southeastern California. It is well-known for extreme heat every summer. This valley in the desert of southeastern California also includes Badwater Basin. The area is located at 282 feet (85.9 meters) below sea level and is the lowest point in North America. 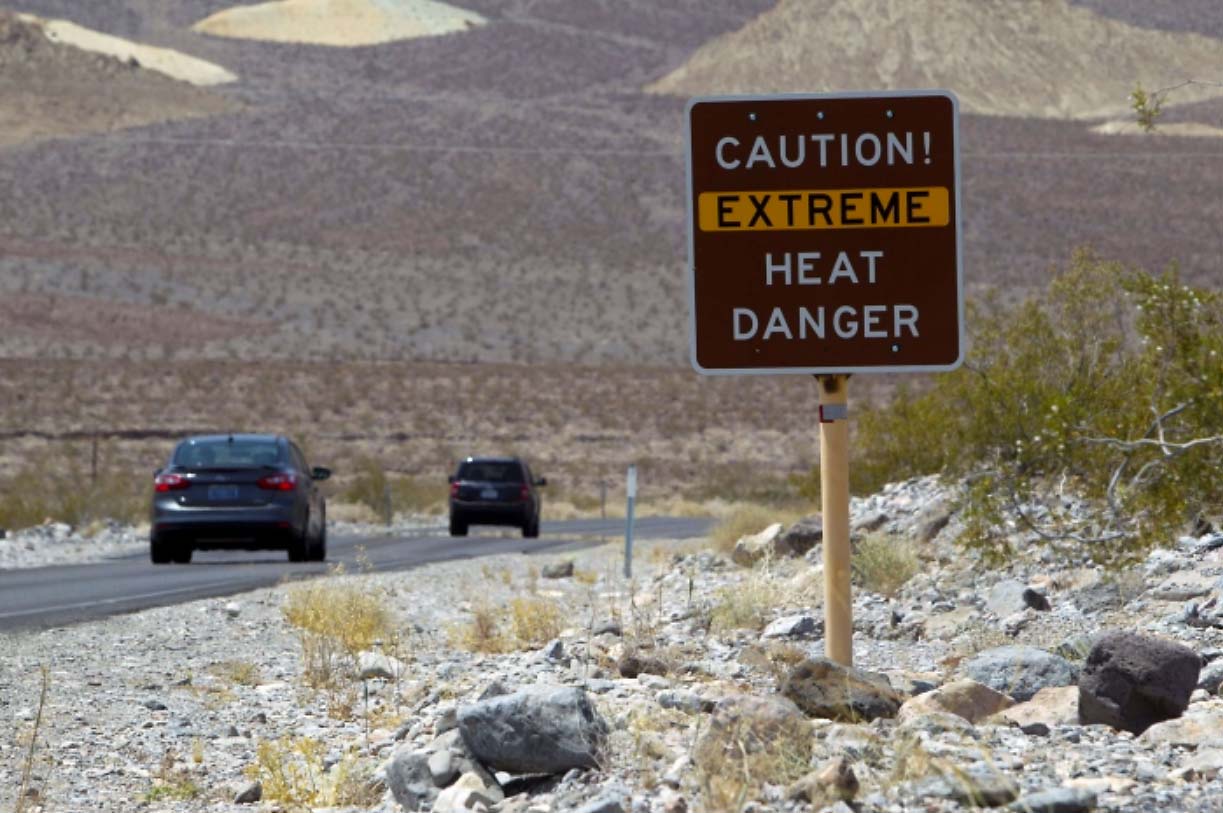 WHAT ARE THE EXISTING HEAT RECORDS IN DEATH VALLEY?

The desert Southwest is the warmest and driest place of the United States. Its geographical position often leads to excessive heat that extends for days and weeks. During summer, temperatures exceeding 122 °F or 50 °C are no exception. Just like this weekend, for example. The chart below is the peak afternoon hour temperature on Saturday, July 10th. 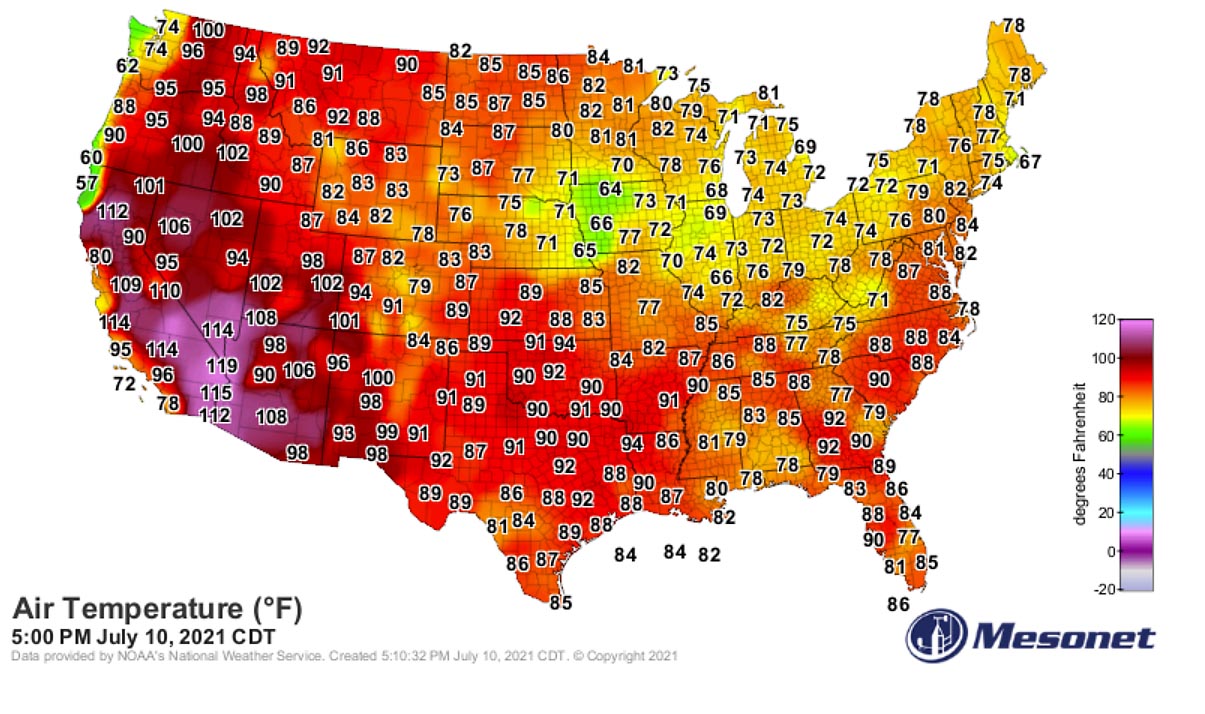 Death Valley is usually the hottest place when heatwave occurs.

Although the Greenland Ranch (known as Furnace Creek resort) in Death Valley has been known to hold the highest ever temperature record of 134 °F (= 56.7 °C), set on July 10, 1913, burtfthere have been debates that the reading was not verified properly and could be false.

There is speculation that those records may be invalid due to the faulty placement of the meteorological instrumentation. All official weather sensors globally, including the ones used by the National Weather Service, are strategically placed to avoid interference from direct sunlight, wind, trees, or moisture.

Some weather experts say the measurements of this record have been erroneous, along with several other extremely high temperatures recorded of summer 1913. According to weather historian Christopher Burt, other temperatures in the region recorded in 1913 simply do not align with other readings in the Death Valley. 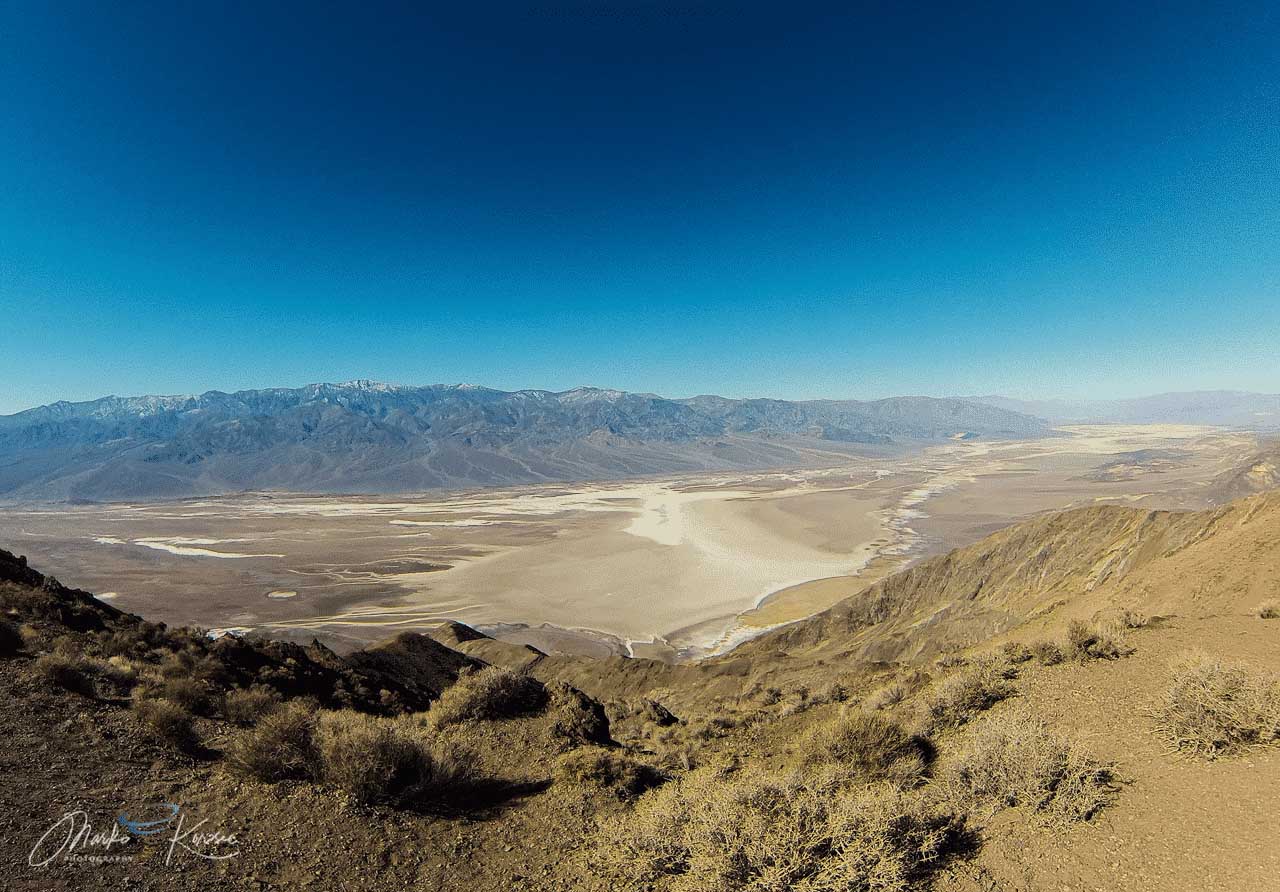 DESERT SOUTHWEST US HEATWAVE SHATTERED MANY HEAT RECORDS THIS WEEKEND

Saturday was actually expected to bring extremely high temperatures, even believed that some locations could see their record-challenging temperatures. And they did. Several all-time heat records were reported in the desert Southwest of the United States. 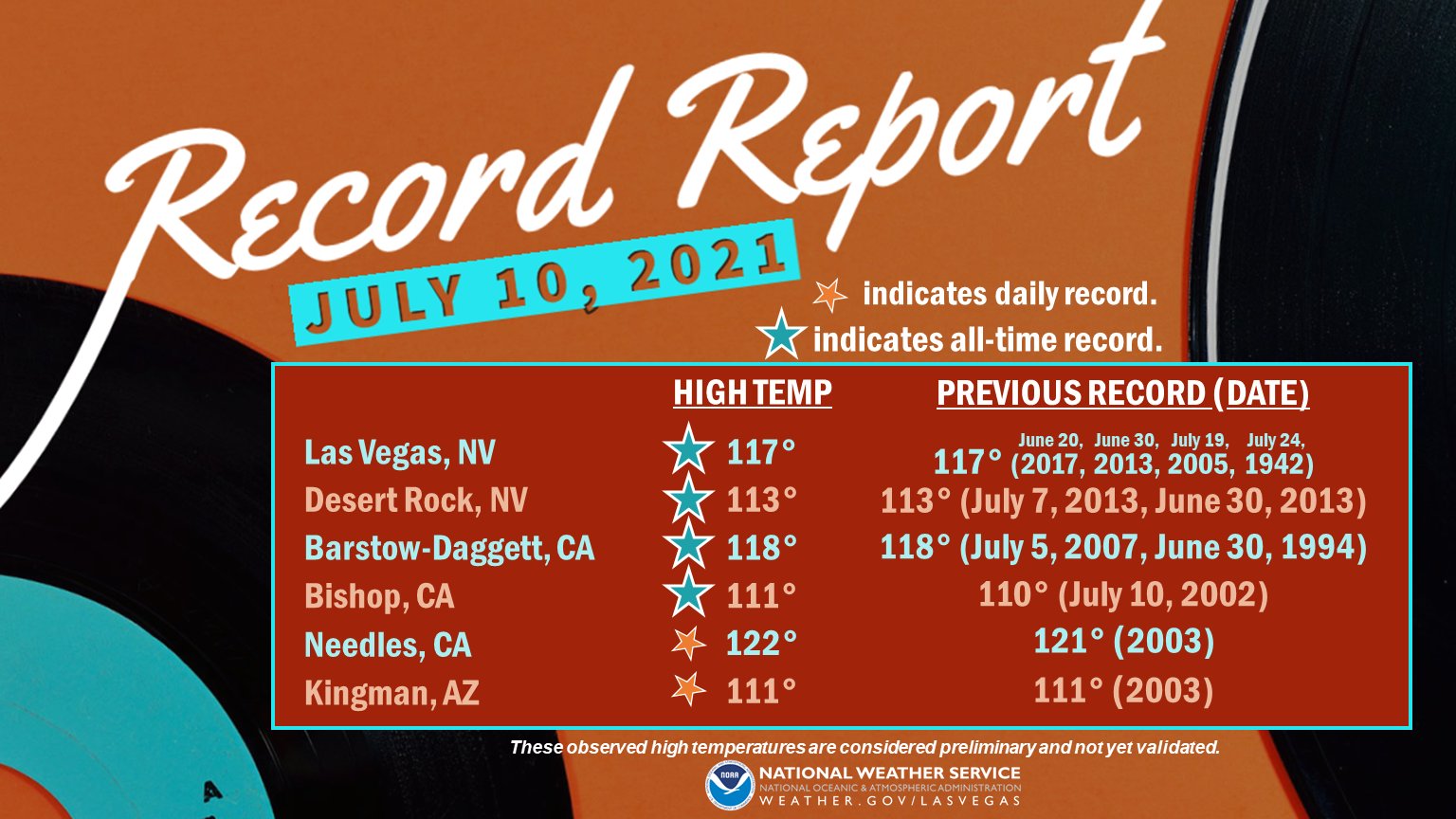 Palm Springs, California smashed its existing heat record of 119 °F from 2012, it was 120 °F on Saturday, July 10th. The same goes for Ukiah, California with 111 °F, and Tonopah, Nevada with the maximum temperature of 104 °F on Saturday. Both breaking their previous records by 1 degree Fahrenheit.