A rather widespread severe weather is expected across parts of central Europe on Tuesday. In response to an enhanced upper-level forcing ahead of the emerging frontal system from the west, strongly unstable air mass combines with rather strong wind shear. Severe thunderstorms are expected.

The most intense severe storms are likely to develop along the southern Alpine flank and northern Italy where the best conditions for discrete supercells will exist. Those could bring very large hail, severe winds, and especially a huge amount of rainfall. Locally more than 150 mm could accumulate in less than 24 hours period.

For this reason, an MDT (moderate) risk has been issued to highlight the areas where the most robust and dangerous severe thunderstorms and potential flooding threats are likely to develop around the Alps on Tuesday. An ENH (enhanced) risk of severe thunderstorms exists over Germany.

Another area of interest is the SLGT risk across northeast France into parts of Benelux where excessive rainfall could enhance flooding threat in the wake of the upper low drifting east. Persistent heavy rainfall could cause flash floods.

Above: Video animation of the convective thunderstorm development across Europe from Tuesday morning into the early Wednesday morning, July 13th to 14th, 2021.

The general weather pattern across Europe indicates a large and relatively deep upper-level low moving east across southern France with favorable large-scale forcing spreading towards the Alps. The low is affecting the weather across central Europe, parts of the Mediterranean and southwestern Europe.

To the west-northwest of it, a strengthening upper High is gradually expanding towards western Europe. While to the north and east, strong upper-level ridge is centered over the Baltic region, dominating much of the eastern and northern portions of the European continent.

At the surface, a weak surface low is moving east across central Europe, with its center of Germany. A diffuse surface cold front is advancing east across the northern Mediterranean and the Alpine region, becoming the main focus for the weather evolution on Tuesday. 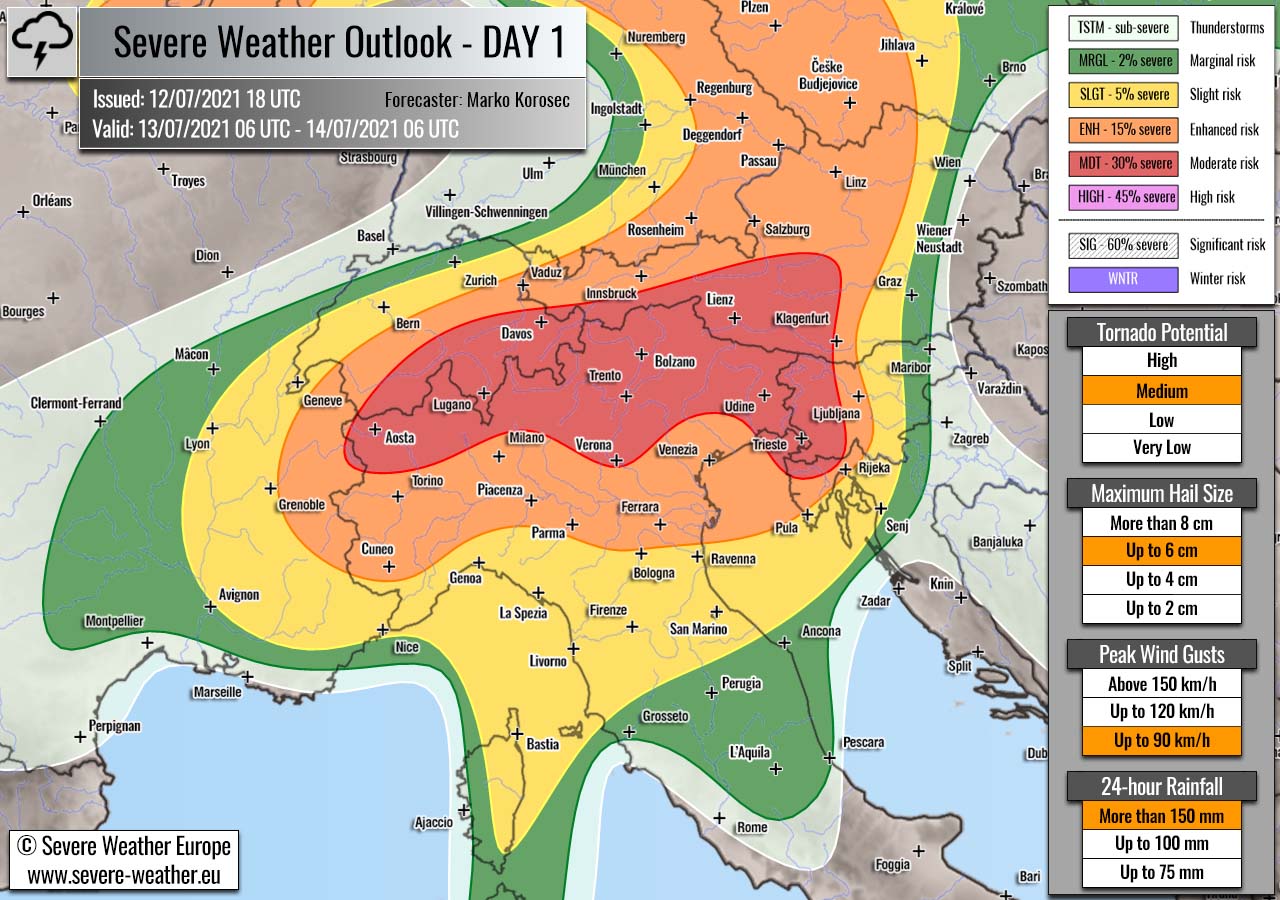 An eastward moving frontal system will begin producing convective activity through early Tuesday morning already while entering the Alpine region from southeastern France. Activity will gradually increase in coverage and intensity during the day, thanks to rather rapid increase of instability across northern Italy and the Adriatic Sea.

Above-normal Adriatic sea temperatures will provide high dewpoints to support 2000-2500 J/kg of MLCAPE into the Po valley and towards the southern Alpine flank. While favorable left-exit region aloft brings a lot of divergent flow and strong shear.

Thunderstorms should easily become severe, isolated to scaterred supercells are likely to form across the North Italian plains, moving towards the Alps. Storms will bring large to very large hail and severe winds, possibly also tornadoes given the high low-level instability and shear/helicity.

Closer to the Alps, training-cells effect will be possible and could lead to very heavy and torrential rainfall with high rainfall sums locally. More than 150 mm of rainfall will be possible within 24-hour period, across the whole southern Alpine flank. For this reason the MDT risk has been issued, to highlight areas with the most robust threat for dangerous flash floods.

SLGT risk has been issued for areas surrounding the MDT/ENH risks across the southern and northern Mediterranean and around the Alps with less coverage of severe weather.

Storms will be gradually moving east with time and continue through Tuesday night while spreading into the North Adriatic region, western Slovenia and southern Austria. Although the eastward progress of storms will be slow, some convective lines with severe winds will be possible while torrential and excessive rainfall should remain the primary threats across northeast Italy into western Slovenia.

ENH/SLGT risks were extended further east to cover the possible extent of overnight activity across Slovenia and Croatia. 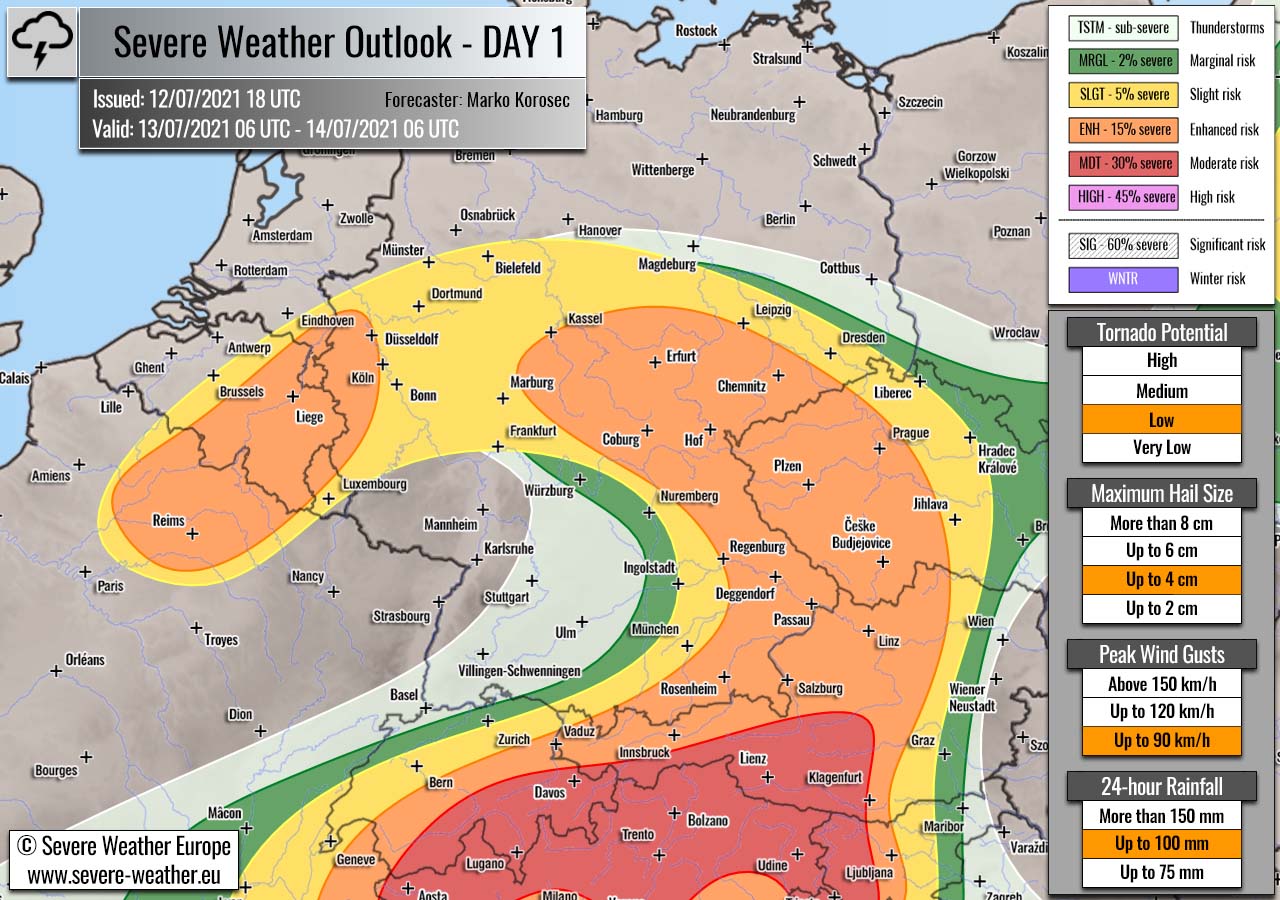 With the northward advancing warm front over Germany, isolated convective storms are likely to develop with moderately unstable and sheared environment. Around 1500-2000 J/kg of MLCAPE coupled with 30-35 knots of shear could produce a few supercells.

The most intense storms could bring hail up to 4cm and severe winds, especially over eastern Germany and western Czech Republic where most favorable conditions will be present. Good low-level shear/helicity near the warm front could also support some tornado potential. Activity will gradually vanish after sunset as instability decreases.

ENH/SLGT risks have been extrended into western Germany, parts of Benelux and northeast France where threat for excessive rainfall will exist. Locally more than 100 mm of rain will be possible, mainly non-convective although some storms could also occur. 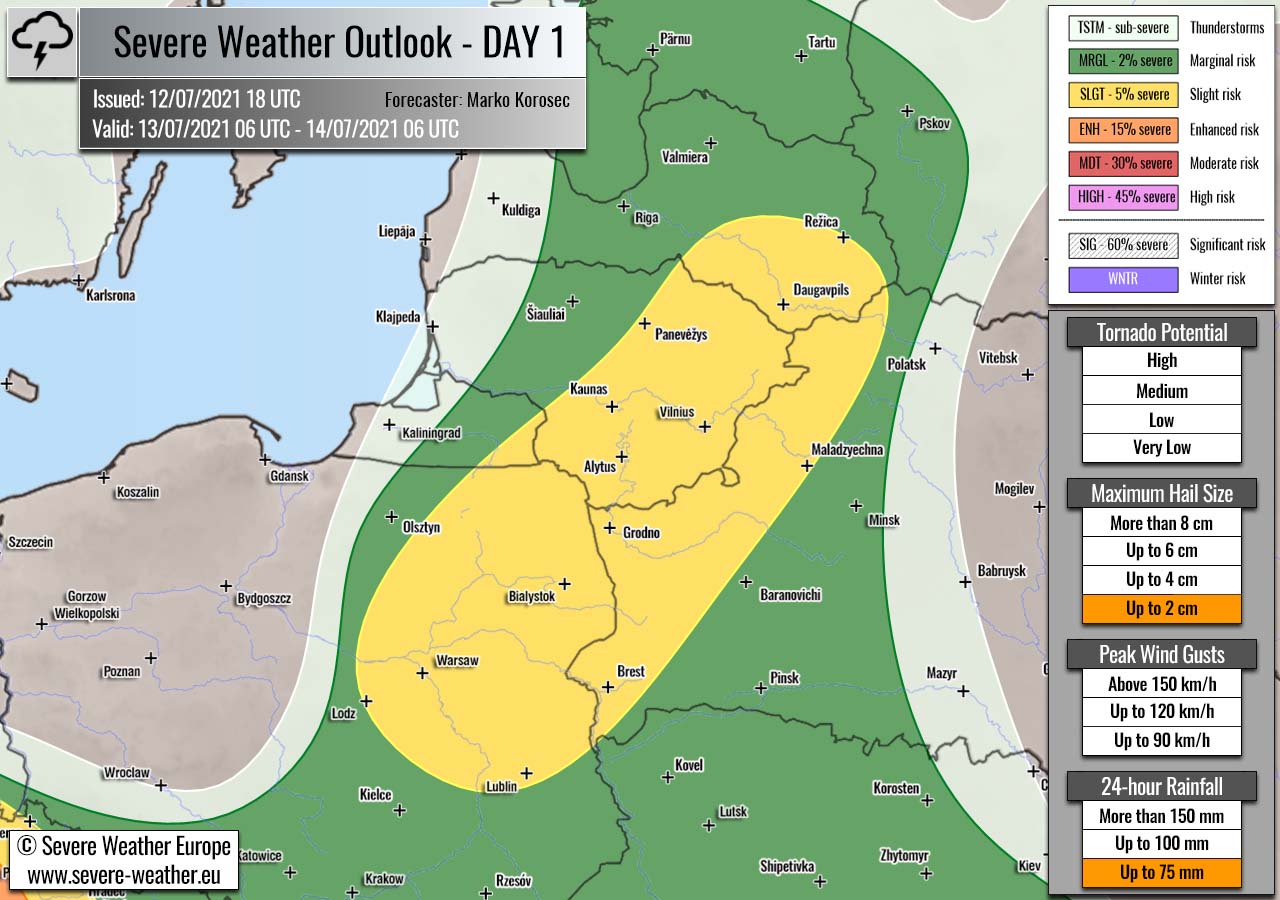 A strong diurnal heating under a shallow upper low/wave will allow strong instability to build up, while the wind field supports only weak wind shear.

A few isolated strong multicell or pulse storms will be possible, bringing some marginally large hail and strong winds. Rather slow-moving storms will contribute to locally a lot of rain and flash floods threat.

MRGL risks have been issued for parts of Ukraine, Moldova into northeast Romania with an isolated threat for severe storms, capable of producing severe winds, marginally large hail, and torrential rainfall.

TSTM risks have been issued for northern Denmark, southern Sweden, Georgia and northeast Turkey with a threat for daytime-driven thunderstorms. Limited shear is present in these areas, so the storms should remain sub-severe.