North Pacific weather pattern is on roll, it keeps producing storm after storm, almost on daily basis this winter. Currently, there is a triple extratropical storm threat ongoing, with a massive winter storm blasting Southeast Alaska with hurricane-force winds today and tonight. New intense storms with severe winds, tons of snow, and major waves expected to form until the weekend.

We have been following the ongoing pattern over the past weeks and the North Pacific mid-latitude and extratropical storm seasons are very busy this year. This is the effect of the ongoing La Nina pattern, which is resulting in much above-average cyclone activity over the North Pacific. Most of the storms are gaining strength very fast and move towards the Aleutian Islands, Alaska mainland, or the Pacific Northwest of the United States and Canada.

Yet another impressive and deep extratropical storm has developed this Tuesday, centered over the far North Pacific, precisely over the Gulf of Alaska. It has formed just a few days after the most intense North Pacific storm on record blasted into the Aleutian Islands, Alaska, and grazed into the archipelago with major 17+ meter (58 feet) waves and a record-setting low pressure of 921 mbar.

Although the large extratropical storm with two cores has peaked over the Gulf today, its large size and intensity remain strong enough that its impact is significant for Southeast Alaska and also along the Pacific coast of western Canada and the Northwest United States. Attached below is an impressive, textbook appearance of this extratropical storm, as seen by the GOES satellite imagery in Airmass channel scan, provided by CIRA/RAMMB NOAA: 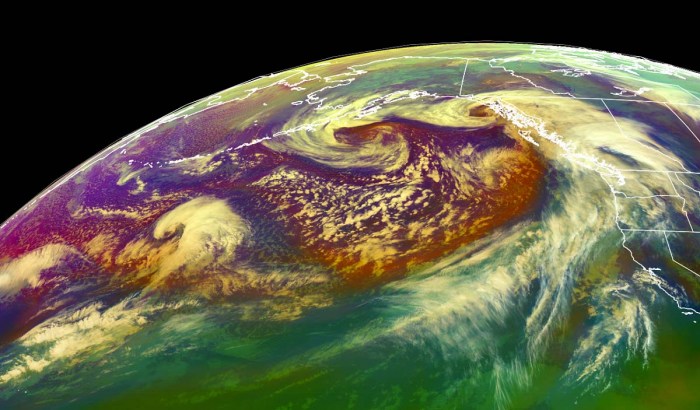 And notice also further southwest of this large extratropical storm, there is already unfolding a new rapidly intensifying extratropical storm, developing significant waves, and violent winds. Those are expected to spread towards Southeast Alaska and the coast of the Pacific Northwest in the coming days. This system will bring yet another large swath of excessive rain and deep snow in the coming days.

This current North Pacific storm is a very deep cyclone as its pressure has pushed below 940 mbar after underwent a rapid strengthening on Monday, January 4th. This process is called *bombogenesis as the pressure drop was near 30 mbar over the 24-hour period, so easily above the threshold for such classification. A bomb cyclone or a bombogenesis is a meteorological term that describes a mid-latitude cyclone (also called an extratropical low or storm) that very rapidly intensifies.

The bombogenesis process occurs when an extratropical storm gains a rapid intensification process when its central pressure falls for at least 24 millibars over 24 hours period. A millibar measures atmospheric pressure. This often happens when a cold air mass advection from the Arctic region collides with a warm air mass over the Pacific (or Atlantic) Ocean and leads to an explosive strengthening of the storm. The formation of this rapidly strengthening weather system is a process called bombogenesis, which is finally known as a bomb cyclone.

There has been a lot of rain, also with flooding, and indeed an incredible amount of snow across the Northern Rockies mountain chain from the Northwest United States up to Southeast Alaska and the Canadian side of the mountain range along the Pacific Northwest. The snow depth is literally counting in feet or meters, inches or centimeters simply do not count anymore.

Let us get into some details in this large Gulf of Alaska storm first. The satellite analysis is spectacular while the weather model forecast guidance hints its impact for Southeast Alaska is significant, leading to even more rain and snow for the region. Additional storms will bring tons of new storms over the next days.

The intensification of this extratropical North Pacific – Gulf of Alaska storm was again very rapid, starting on Sunday into Monday with rather explosive development. The cyclone has deepened from around 1000 mbar on Sunday morning local Pacific time to 950 mbar by Monday evening, so about 50 mbar pressure fall in about 36 hours. Its pressure fall was around 12-15 mbar per 12 hours period in the beginning, then slowed down when the storm reached its peak on Tuesday and split into two cores. 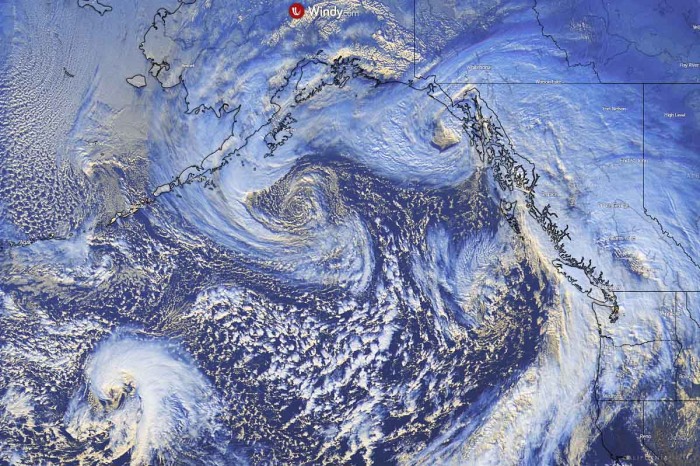 The wide view of the visible satellite channel above indicates the textbook appearance of a large extratropical storm with two separate deep cores developed by Tuesday afternoon. There is also a textbook dry intrusion visible, being pushed into the eastern core of this extratropical storm. We can also see yet another rapidly developing storm further southwest of this system. Although small, it will grow bigger and becoming intense from Wednesday into Thursday. 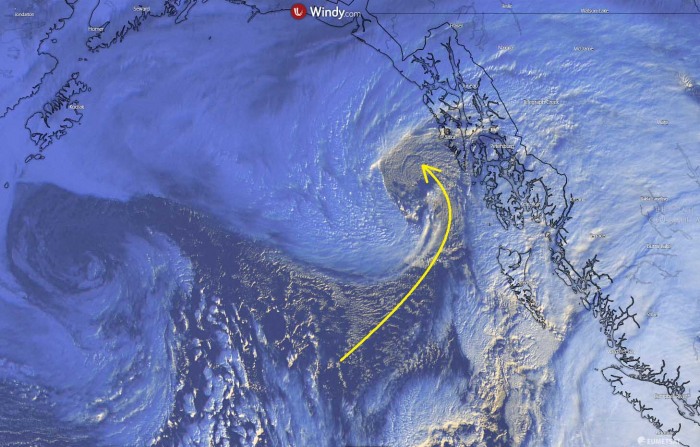 The image above reveals a closer look into both cores of the large storm today. This is a great presentation of the dry conveyor belt wrapping into the eastern core, with a textbook appearance of the occluding low. The main, eastern core is pushing an intense winter storm into Southeast Alaska. Winds are violent locally and will continue spreading across Southeast Alaska tonight. With an intense snowstorm into the mountains behind.

The central pressure of the low has deepened to 946 mbar by Tuesday afternoon local time (18 UTC) while the whole system with two well-defined cores continues north across the Gulf of Alaska. Winds should gradually become weaker overnight as the front ejects into the mountain range. So the storm’s wind intensity and its central pressure have peaked and the pressure will now be gradually rising into Wednesday.

Below are the estimated surface analysis data for the mean sea-level pressure by the NOAA Ocean Prediction Center (OPC) from the storm’s birth until now. The pressure analysis covers the period from Sunday through Tuesday afternoon local Pacific time: 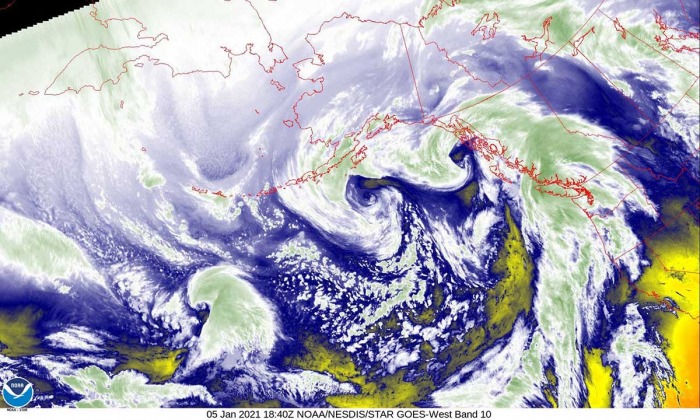 As we can see from the pressure analysis above, the central pressure in this extratropical storm has had an impressive 50 mbar pressure fall in the 36-hour period between Sunday 12 UTC to Tuesday 00 UTC timeframes. There was actually a very explosive strengthening between 00 and 12 UTC on Monday, with a remarkable 24 mbar pressure drop in a 12-hour period only. Keep in mind that the threshold for the bombogenesis is 24 mbar per 24 hours, so this was double the official threshold! 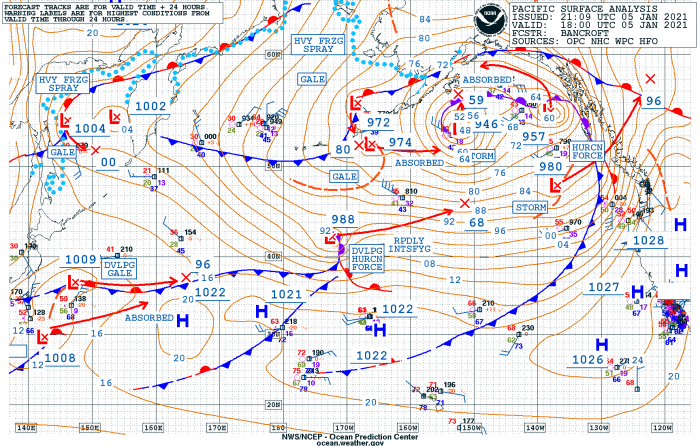 The storm’s central pressure has been deepening at a slower rate since Monday night into Tuesday with the peak reached by the afternoon hours when the central pressure has bottomed out at 946 bar (18 UTC, Tuesday). The extratropical storm continues moving towards the northeast, dominating the whole Gulf of Alaska. This low has become yet another powerful North Pacific extratropical storm, with a massive winter storm spread into Southeast Alaska. Severe winds were reported from the Alaska capital city, Juneau.

As discussed above, the system has pushed to its peak central pressure of 946 mbar this Tuesday afternoon and it has grown into a large storm. The pressure analysis on Tuesday afternoon revealed that the main core of the whole storm is the western one, with a secondary low deepening on its eastern flank, being spread towards Southeast Alaska. A winter storm has hit the region and is now dumping a huge amount of rain and snow towards the mountains. 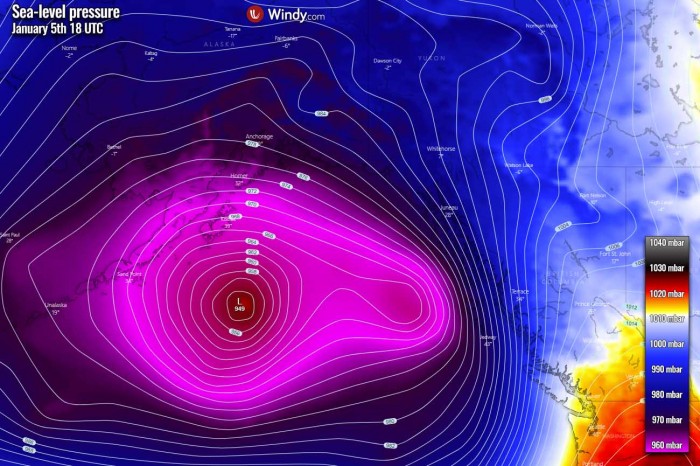 As we can see from the isobars above (lines connecting the same air pressure), the gradient is resulting in severe winds across the Northwest Pacific coast and the whole of Southeast Alaska. Peak gusts have locally been reported near 70-75 mph, potentially being even stronger over the higher terrain. Notice also a large and very *violent* swath of the newly developing extratropical storm further southwest. 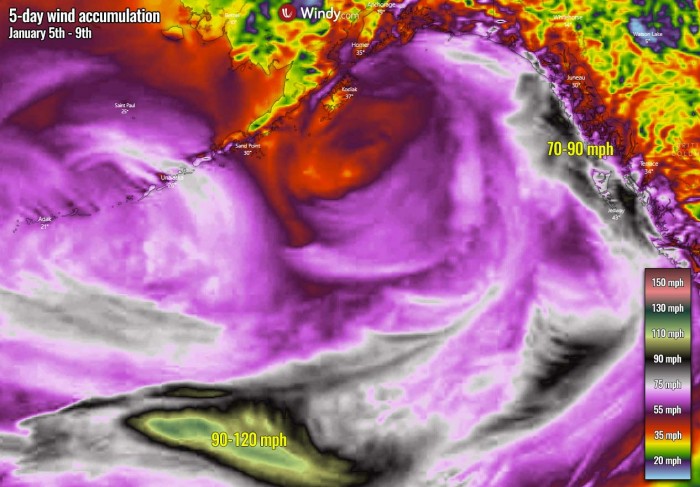 The whole storm size is quite large, so the wind field and high swell with significant waves are being generated. Gradually spreading towards the Pacific Northwest and Southeast Alaska. The highest waves are close to 35 feet there. And the swath of these waves is broad further west, fits well with the size of the storm. 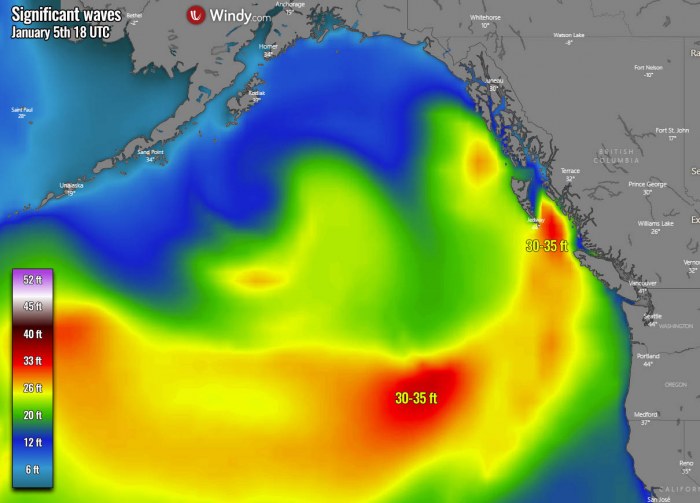 The secondary, eastern surface low has been gaining strength this Tuesday afternoon and moving north-northwest along Southeast Alaska. Its main threat is the powerful winds being generated within the strong pressure gradient over the region. This should definitely support additional dangerous winds tonight, then gradually vanishing through Wednesday morning. 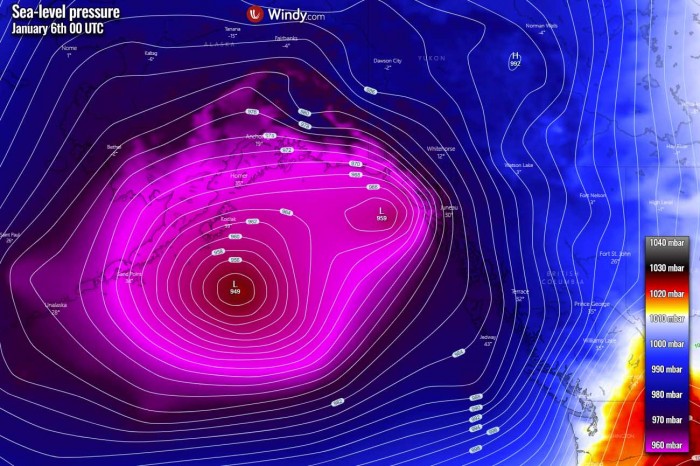 At the same time, the low further southwest will undergo a rapid intensification, as we have seen earlier above. The wind field will become very violent, potentially supporting the development of a sting jet wind maximum with more than 100 mph wind gusts. A sting jet phenomenon is a narrow zone of strong winds, originating from within the mid-tropospheric cloud head of rapid or explosive cyclogenesis. Winds are enhanced further as the jet descends, drying out and evaporating a clear path through the precipitation.

The rather explosive nature of the storm’s wind field will again generate massive waves that could grow to near 42-45 feet heights. Luckily, those should remain far from the land areas of Southeast Alaska or the Pacific Northwest, so the peak winds and waves will remain over open waters of the North Pacific for now. 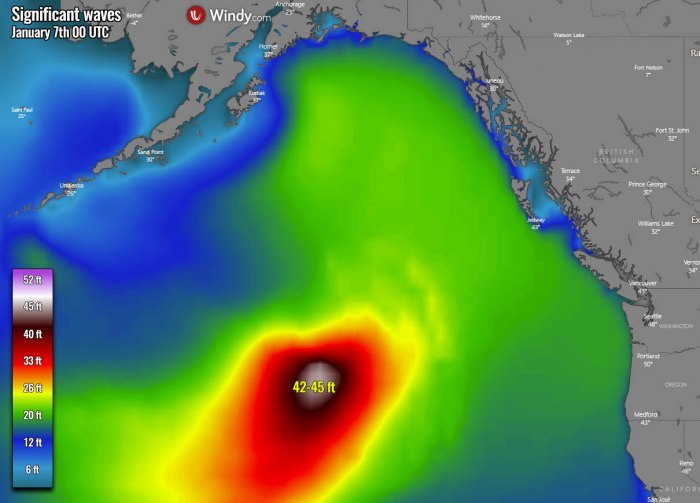 Into Wednesday night, the large extratropical low over the Gulf of Alaska will continue weakening, so conditions will there gradually improve. But the new low will already deepen into the upper 960s and will be coming closer to Southeast Alaska. We can see the pressure gradient will be strengthening also, so that is why the winds will be so violent as we saw on the wind chart earlier. 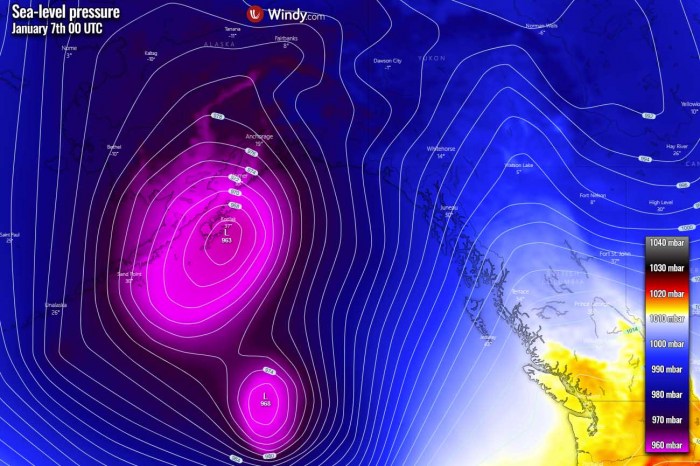 While the winds will be the strongest through Wednesday, they will remain severe also on Thursday while the storm will be coming closer to Southeast Alaska and the Pacific Northwest of Canada and the United States. The highest winds should reach above 65 mph along the coast. The swell and sea waves will remain large, even significant with near 45 feet to the immediate east of the core. Also spreading towards Southeast Alaska from Thursday night into Friday. 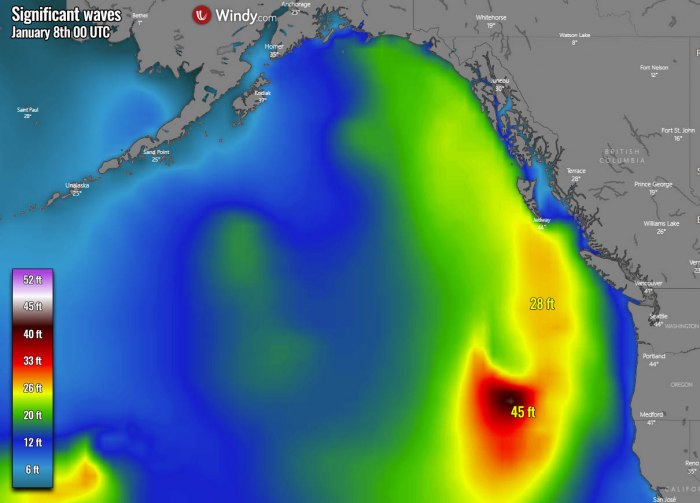 This repeating, very progressive North Pacific pattern has been very generous with a huge amount of snow for the Northern Rockies mountain range. The snow depth is now being counted in feet or meters, inches or centimeters simply do not count anymore as a very extreme amount of snow has been accumulating this winter there. And indeed further south across the Cascade Range, with an above-normal amount of rain for the Pacific Northwest of the United States.

The ongoing sizeable extratropical storm with a winter storm over Southeast Alaska will being an additional 5-10 inches of precipitation over the next five days. Basically all the way from the Pacific Northwest across the Northern Rockies into southern Alaska mainland. huge, close to 10 inches of precipitation are likely across the mountains between Anchorage and Valdez. 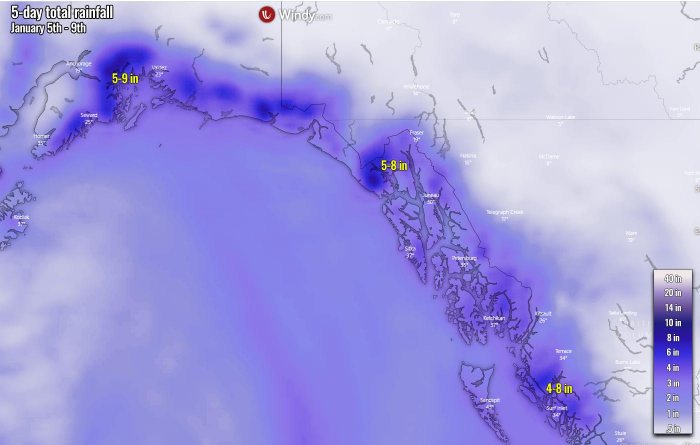 Indeed, the majority of this precipitation will be as snowfall, as favorable temperature conditions are spread across the North Pacific, the Northern Rockies, and Southeast Alaska region. An extreme amount, 30-80 inches (4-6 feet) of snow seems likely across the mountain range with that precipitation forecast. Indeed the highest amounts are expected near the peak mountains in southern Alaska mainland and Southeast Alaska over the Rockies. 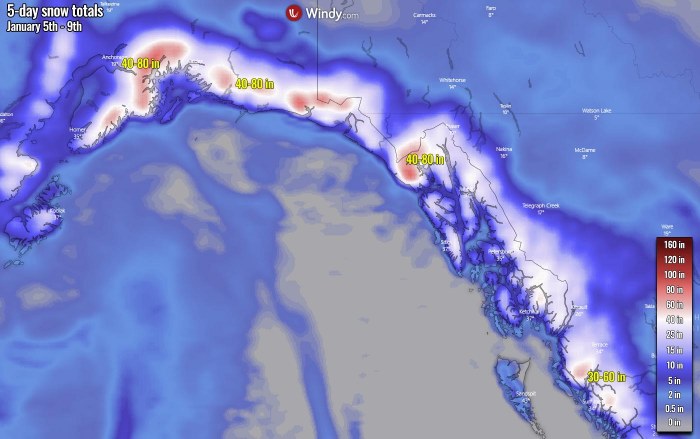