Both European and American continents are ahead of a significant pattern change this week. Similar to Europe, an Arctic outbreak is expected to spread across a large part of the United States after today, with an extensive high-pressure system expanding from Canada. Temperatures will fall below 20 °F across the northern half of the US, even below 0 °F near the international border with Canada.

With the strengthening Canadian upper-level ridge, the very cold Arctic air mass begins spreading south into the northern United States. Reaching central Plains by this evening, as well as the whole Midwest and Great Lakes by tomorrow (Friday). Temperatures will drop below 20 °F across Nebraska, Wyoming and South Dakota on Friday morning, but much lower across northern Minnesota and North Dakota, likely into negative F values! That’s extremely cold for late March and it will feel like it’s January there! This will be even more impressive as temperatures are in the mid-60s to mid-70s across the Midwest over the last days. The cold will spread across East Coast over the weekend and persist until early next week. Attached are 2-meter temperature and the anomalies for 2 m and 850 mbar level: 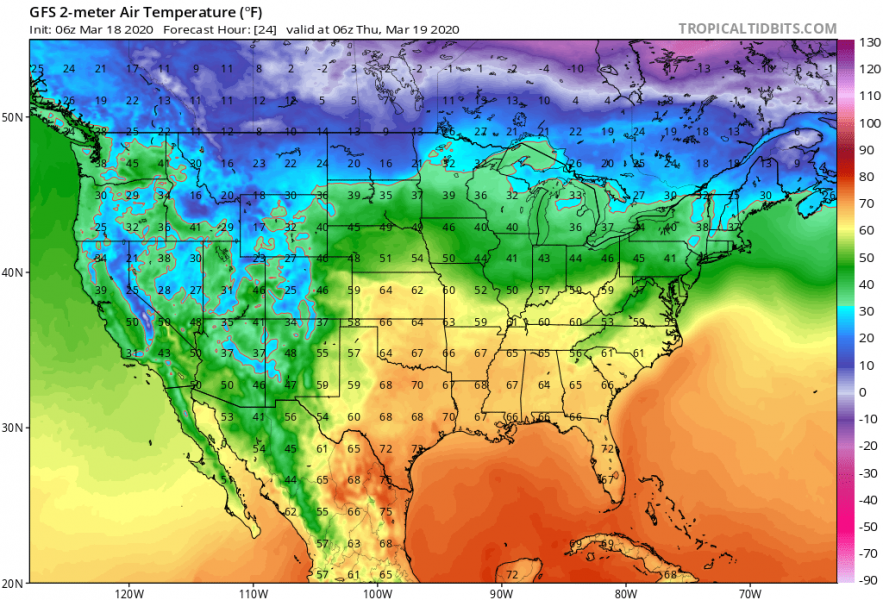 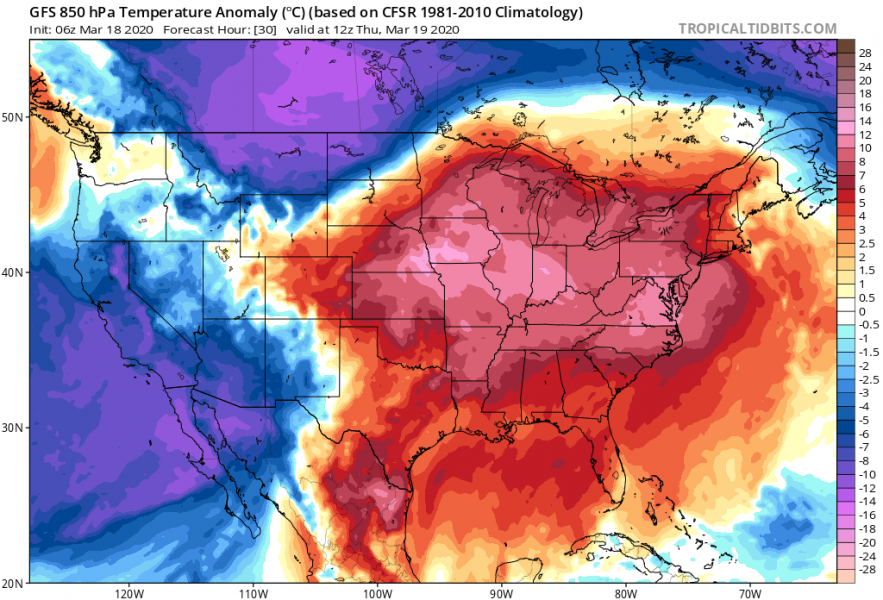 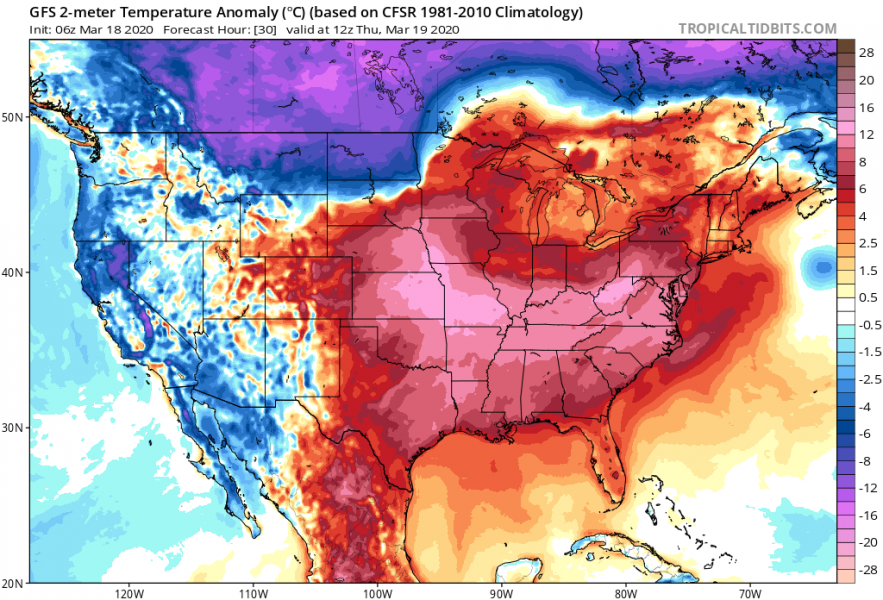 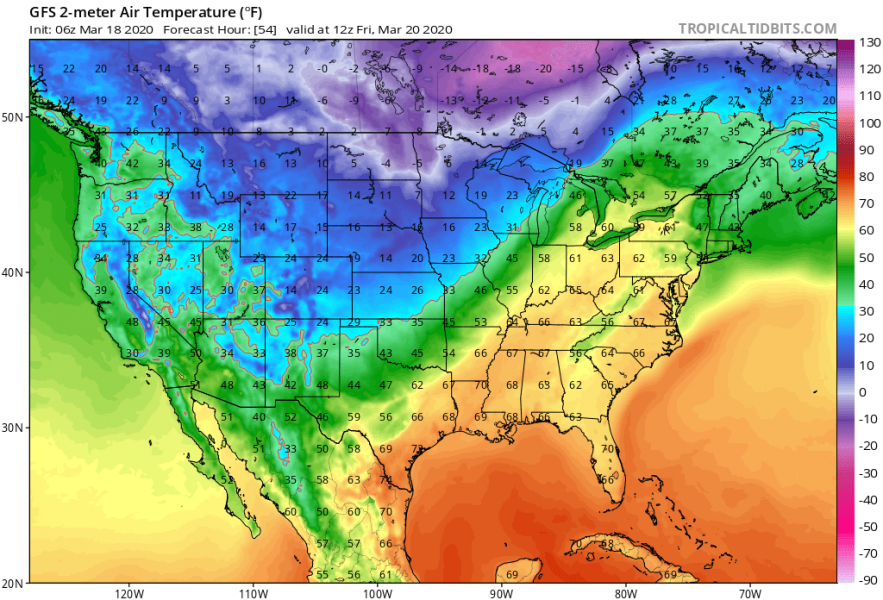 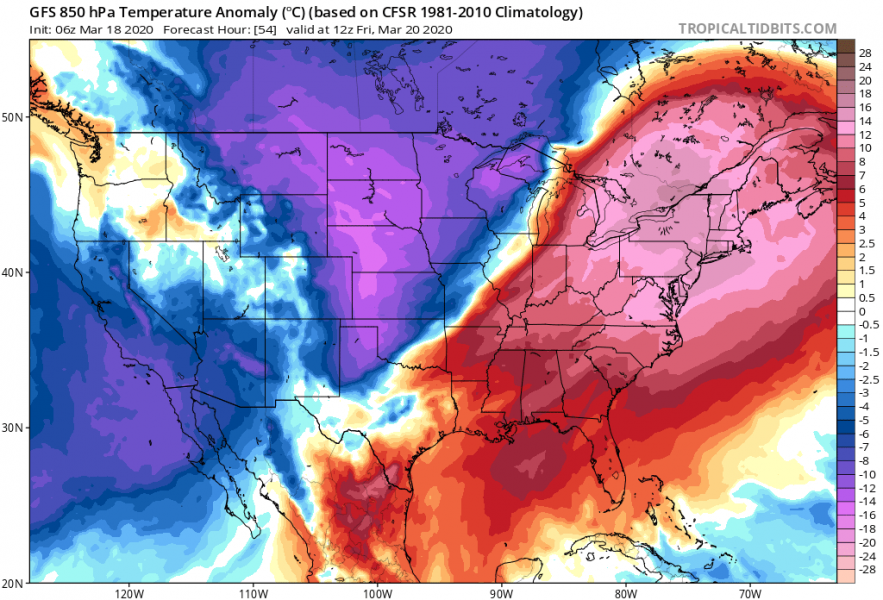 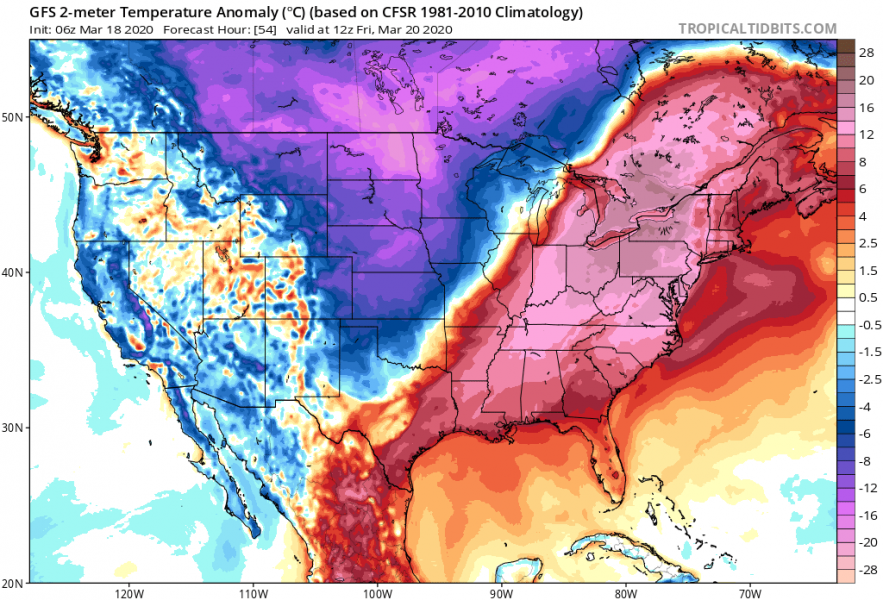 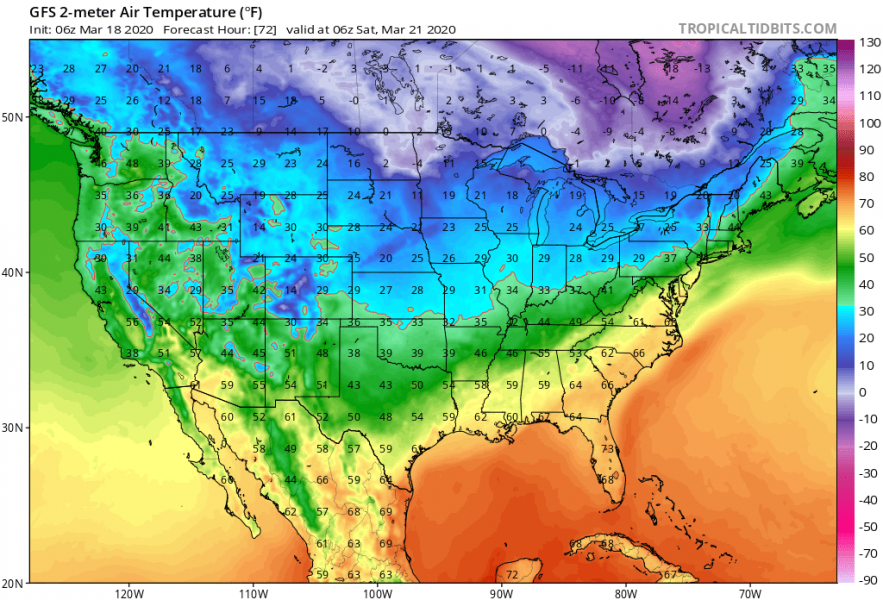 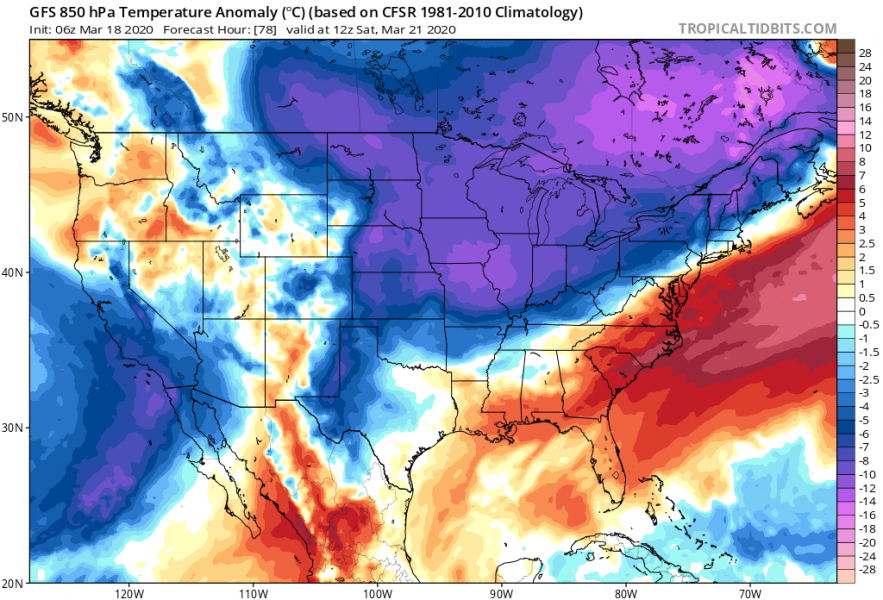 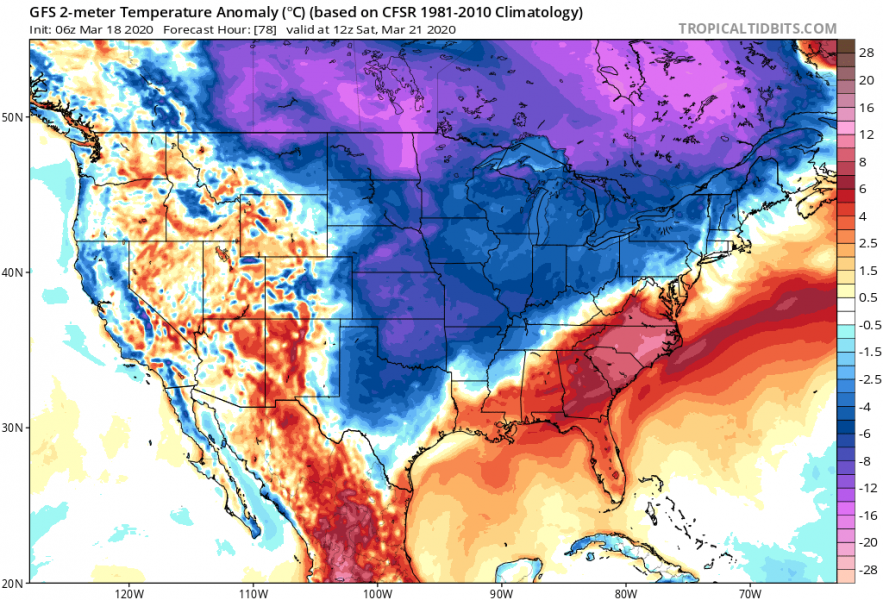 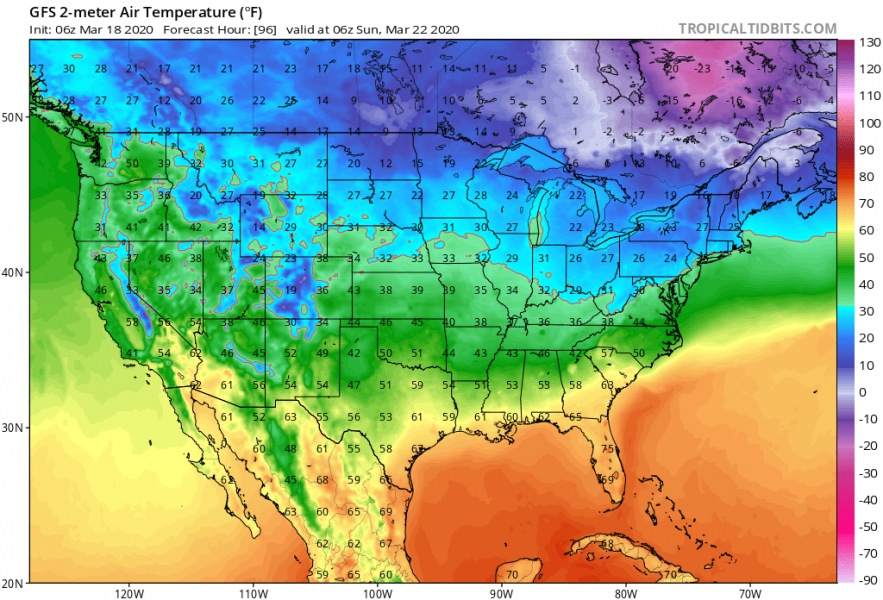 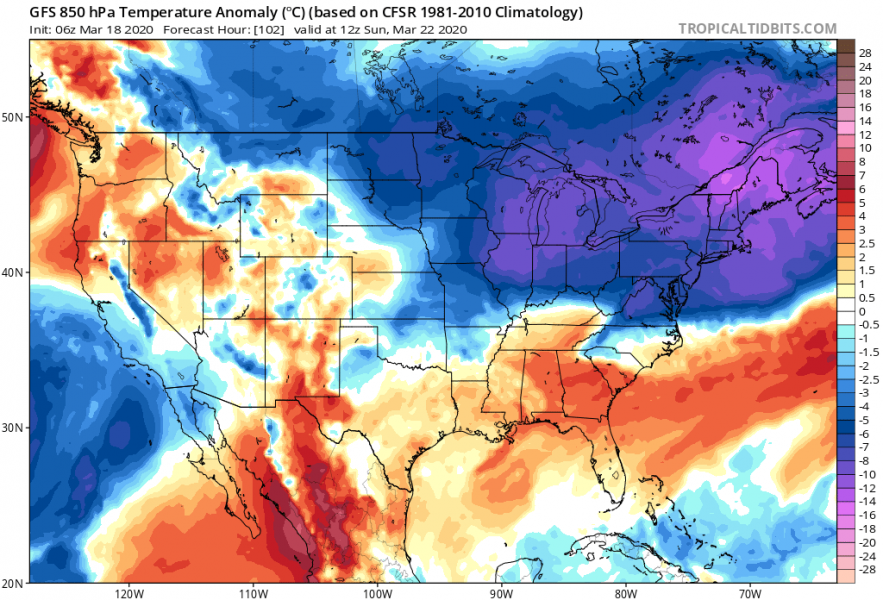 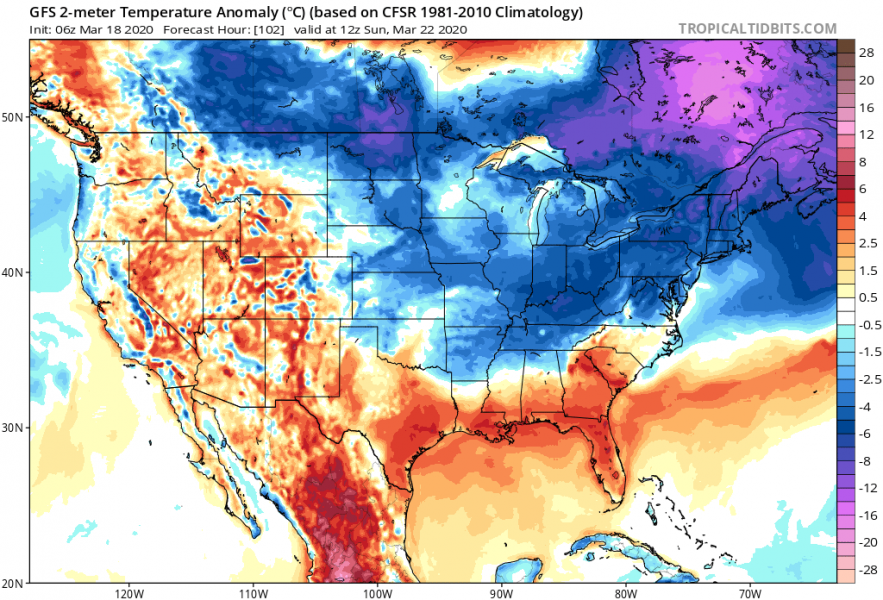 Ahead of the Arctic trough, a deep surface low develops over eastern Colorado (in the lee of the Rockies) and results in strong warm/moist advection with southerly winds across south-central Plains. The system moves east towards Midwest. This introduces an enhanced threat for severe storms are possible tonight – an ENH risk has been issued for southern Oklahoma and north-central Texas. A few tornadoes, large hail, and damaging winds could be accompanied by the storms. On Friday, severe weather threat spreads towards Ohio Valley, Upper Midwest, and Mississippi Valley – SLGT risk has been issued for these areas:

We are all aware of the ongoing coronavirus (COVID-19) outbreak over the world. Its spreading is also dependant on weather conditions, similar to the seasonal flu. Based on the studies, seasonal flu tends to diminish with warmer weather. But in the opposite way, if much colder weather returns, that could have potentially strongly negative impact on the spreading of the virus, including COVID-19. People’s immune system tends to be weaker in colder weather. Sharp weather changes can also have a negative impact on the human immune system. In the case of the Coronavirus COVID-19, the strength of the immune system has been shown to play a major role in the body’s response to the virus, just like with the seasonal flu. The stronger immune system prevents less severe symptoms and can prevent major complications during the infection with the virus. A more polluted air trapped under strong thermal inversions within the high-pressure system can also worsen it in major cities. That can cause respiratory problems with some people, which was shown to be dangerous if combined with a COVID-19 virus infection. So with the arrival of much colder air mass after this weekend, people should take serious precautions to avoid worsening the conditions of their immune system.

We will keep you updated on the further development of this potentially intense and dangerous cold outbreak in the coming days – stay tuned! And indeed, stay safe!

See also – what do we know about the warm/cold air effect on viruses?

See also – Arctic outbreak is also expected across a large part of Europe next week!