A major winter storm with a significant amount of snow is now imminent across the Midwest. Expected to intensify tonight and blanket northern portions of Illinois, Indiana, and Ohio Valley this weekend. Including the city of Chicago, expected to receive around 10 inches of snow until Monday morning.

Associated with a new winter storm unfolding into the Midwest, showers, and thunderstorms are passing over parts of the central Plains and mid-Mississippi Valley this Saturday afternoon. As precipitation runs into sub-freezing temperatures in the Midwest, periods of snow will ensue with snow falling heavily at times tonight.

The system has emerged into the central Great Plains this weekend, arriving from yet another wave ejecting off the deep trough across the West Coast this week. Once the wave arrives east of the Rockies, it began strengthening, turning towards the Midwest. The system has grown quite large, with the textbook appearance of the fronts this Saturday. 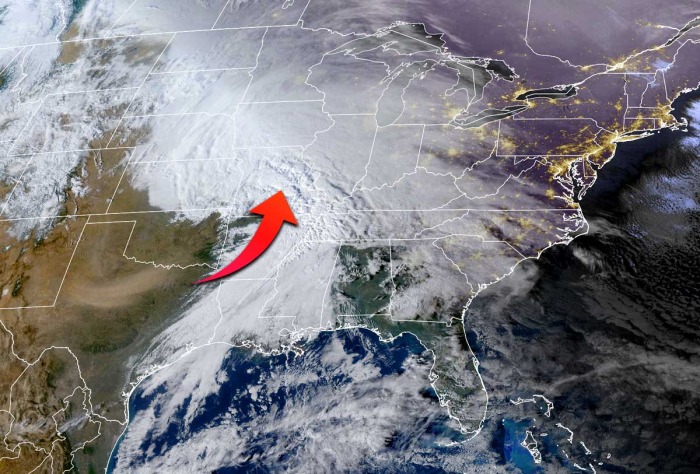 We can also see clear skies across the Northeast United States. The area is still under the effect of extremely cold Arctic air mass from Canada, resulting in so far the coldest temperatures of this winter season.

The event arrives just a few days after the last winter system, which has brought more than a foot of snow for parts of the Midwest. Historic snow has been reported from parts of Nebraska and Iowa.

More than 100 million Americans are under a WINTER STORM WARNING and a WINTER WEATHER ADVISORY along the area from Midwest towards the Mid-Atlantic.

Winter Storm Warnings are issued for a significant winter weather event including snow, ice, sleet or blowing snow, or a combination of these hazards. Travel will become difficult or impossible in some situations. Delay your travel plans until conditions improve. 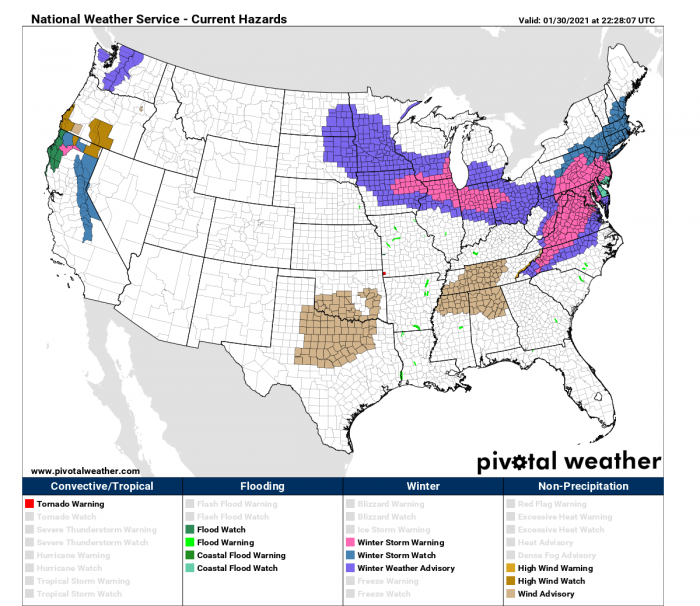 Winter Weather Advisories are issued when snow, blowing snow, ice, sleet, or a combination of these wintry elements is expected but conditions should not be hazardous enough to meet warning criteria. Be prepared for winter driving conditions and possible travel difficulties. Use caution when driving.

The axis of heavy snow then pushed into the Lower Great Lakes where accumulating snowfall is also anticipated. The latest snowfall forecast calls for a swath of 8 inches or more of snow from the Chicago and Milwaukee metro areas to northern Indiana and Ohio through Sunday afternoon.

Expect poor travel conditions to be common throughout these areas during the day on Sunday. As the storm heads east, showers and thunderstorms will track through the Southeast Sunday afternoon while a wedge of cold Canadian high pressure sets the stage for accumulating snowfall across the central Appalachians and northern Mid-Atlantic.

An icy wintry mix in parts of Virginia and North Carolina Piedmont and foothills could lead to ice accretion as high as a quarter inch on Sunday. Travel conditions will be treacherous in these areas Sunday afternoon.

This Saturday, a pretty spectacular and also didactic satellite presentation has appeared with this new frontal system, moving towards the northeast across the central United States. The attached visible satellite image below indicated a quite unstable warm sector from southeast Kansas into Missouri and towards central Mississippi Valley. Severe storms were also reported.

To the north, a textbook huge comma cloud of a strengthening winter storm has appeared. It is gradually increasing precipitation towards the Midwest. Some mixed precipitation is occurring along the moving warm front, including some sleet and freezing rain. But to the north of it, heavy snow is developing. 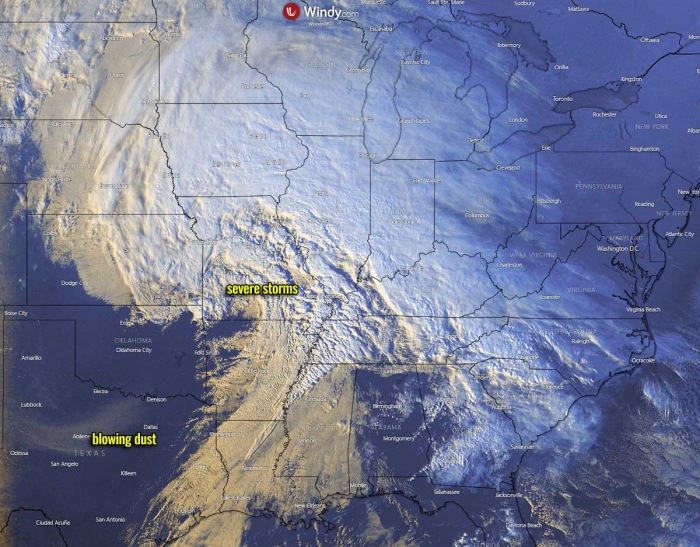 Notice also there is a swath of blowing dust visible across western towards northern Texas, as dry westerly winds are underway. The main cold front is across the Lower Mississippi Valley, moving towards the Southeast United States with some chances for severe weather over the next 24 hours.

The increasing precipitation is best visible on the radar scans this early afternoon Saturday. Those are already reaching into southern Iowa and northern Illinois as the new winter system is moving in from the southwest. 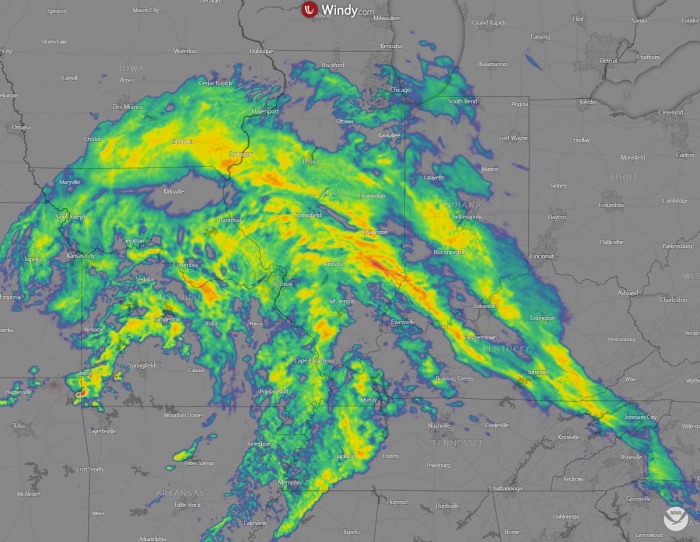 Those will continue strengthening overnight as the moisture advection continues surging north into the southern portions of the Midwest. The attached forecast chart, provided by Windy.com indicated that very heavy snow is forecast across northern Illinois and Indiana. High snowfall rates are expected. 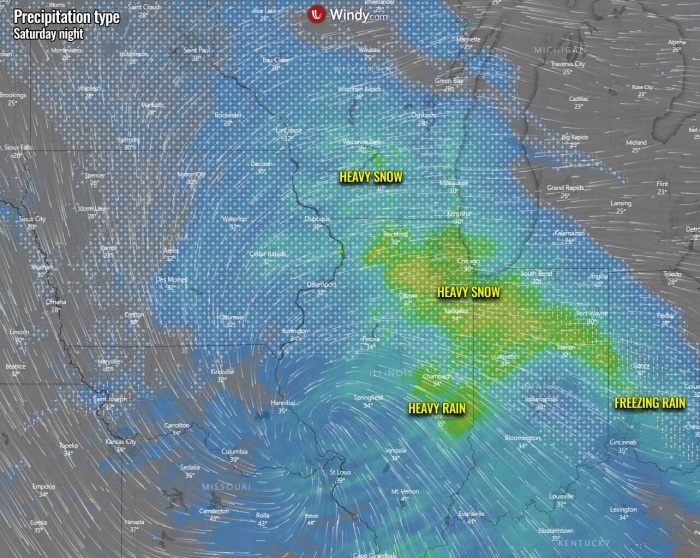 Some freezing rain could be possible across southern Ohio, but ice accumulations should not be any significant. It will be also snowing quite heavily across eastern portions of Iowa and southern Wisconsin tonight. Heavy rain will develop with the strong warm/moist air mass across south-central Illinois and southern Indiana.

The dangerous part of this new winter storm is its trajectory. It first travels north-northeast tonight, then slows down on Sunday before it starts turning east, then southeast towards the East Coast on Monday. In other words, this means the ongoing snowfall will increase tonight and persist for a longer period, as the system doesn’t pass the Midwest, but turns east. So heavy snow will not vanish in few hours as usual. 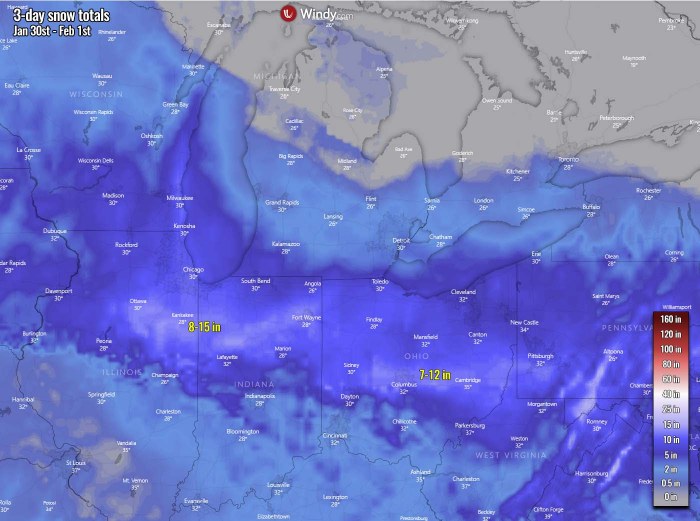 According to the National Weather Service in Chicago, IL a WINTER STORM WARNING remains in effect until Sunday evening at 6 PM CST as heavy wet snow along with easterly winds gusting to 30 mph is expected. The snow will mix with sleet and freezing rain for a short period through early Saturday evening. Total snow accumulations of 4 to 8 inches and locally higher possible. Ice accumulations up to one-tenth of an inch near and west of Interstate 39. 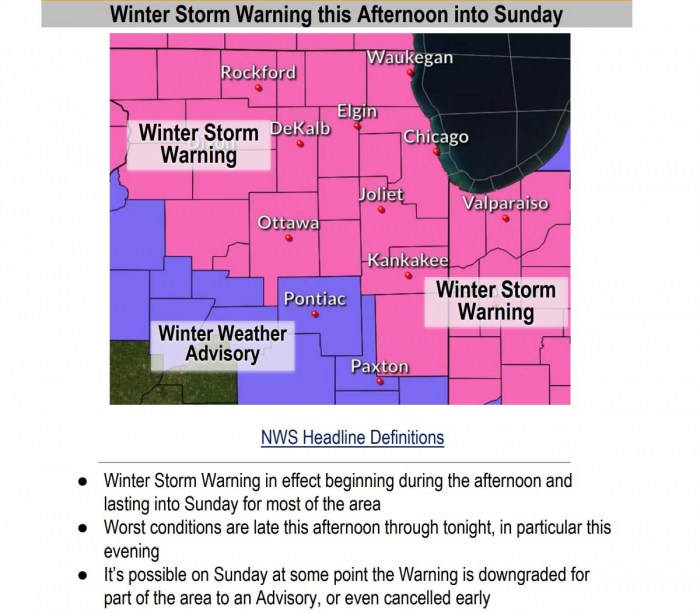 The worst conditions are likely across Winnebago, Ogle, Lee, and La Salle Counties, from the early afternoon Saturday to 6 PM CST Sunday, with the highest impacts late this afternoon through this evening. Travel could be very difficult due to very low visibility and snow-packed roads. Patchy blowing snow is possible this evening and overnight. Power outages are also possible.

If you must travel, keep an extra flashlight, food, and water in your vehicle in case of an emergency. Use plenty of extra caution when shoveling heavy snow. Stay hydrated and take frequent breaks. 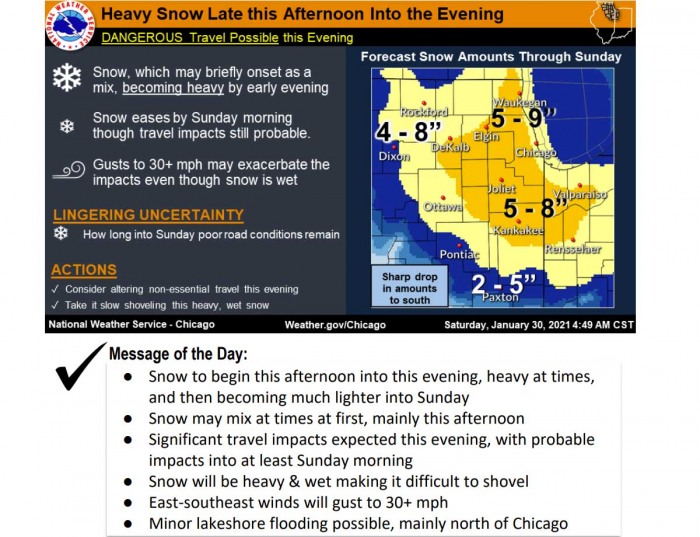 Hazards: Heavy, wet snow with peak snow rates above 1 inch/hr and total accumulations of 5 to 9 inches, beginning as a mix at first. All of northern Illinois and northwest Indiana. A sharp cut-off in snow amounts is expected in far southwestern and southern areas, especially south of the Kankakee River Valley in Illinois.

Timing & Duration: Snow, with a potential brief mix, will begin this afternoon and then turn to heavy snow into the early evening. Snow will taper in intensity by daybreak Sunday morning with light snow continuing off and on throughout Sunday, especially along the lakeshore. The worst conditions and heaviest snow rates are expected from 6 PM this evening to 12 AM tonight. 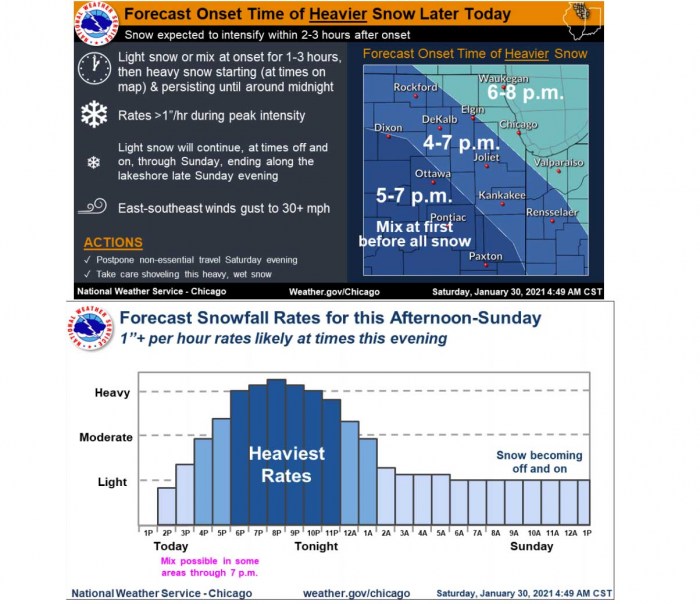 Impacts: Periods of very low visibility this evening and snow-covered roads late this afternoon through at least Sunday morning. Widespread heavier snowfall rates will be seen through much of the evening. A sharp cutoff in snow amounts south of the Kankakee River Valley toward I-74 is likely, though where exactly is difficult to say. Finally, it’s difficult to say how long into Sunday travel impacts will last.

The frontal system will mature tonight into Sunday morning, with the lowest central pressure over Illinois. This will be the lowest pressure for the entire Lower-48 this weekend. Strong upper Highs are present across the Rockies and the Northeast United States, as well as over eastern Canada. 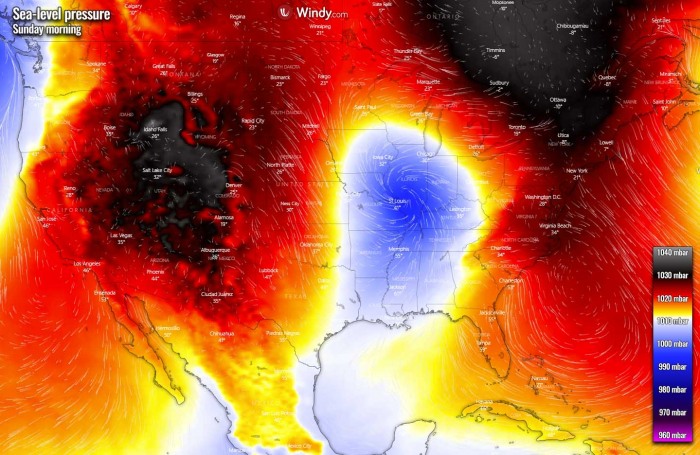 Once the upper wave and the frontal system eject the Midwest through late Sunday into Monday, the advection of much colder air mass spread into Deep South. Through Monday, this air mass will reach very far south, across the Southeast United States, Florida, and eastern Gulf Coast by the evening hours. 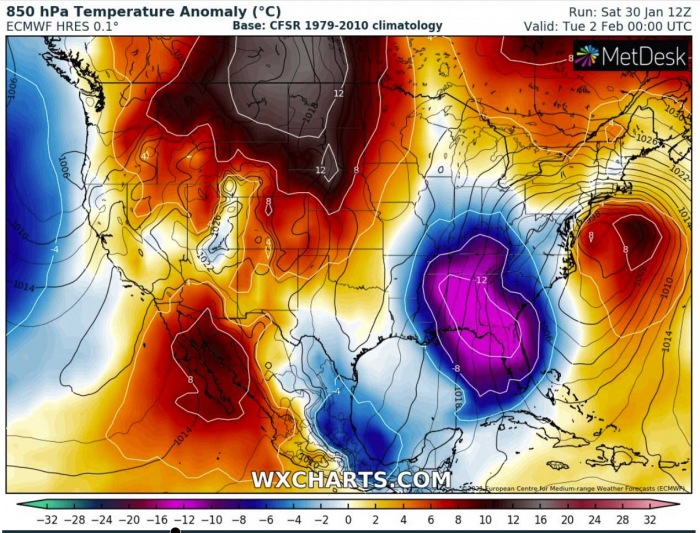 After the current system matures, it turns east-southeast and travels along the southern fringe of the Arctic cold pool over the Northeast.

MAJOR NOR’EASTER ALONG THE MID-ATLANTIC COAST ON MONDAY

When this wave finally arrives on the East Coast on Monday, it raises another concern. With a combination of very cold air mass meeting the warmer seas, major Nor’easter will develop along the Atlantic Coast and lead to a potentially very dangerous snowstorm for the East Coast and the Northeast United States through Monday into Tuesday.

Deep snow could blanket Washington D.C. the city of New York and further northeast towards Boston.

The greatest snow is forecast from the central Appalachians with the worst across New York and further into New England. So the traffic-busy Interstate I-95 corridor from Washington D.C. to Boston could face the worst impact of the heavy snow event on Monday into Tuesday.

Read more about its development below:

Significant snow is forecast to blanket Washington D.C., New York, and Boston on Tuesday as dangerous Nor’easter winter storm set to stage along the East Coast