A new winter storm will develop across the Midwest this weekend, but eyes are now already turning into potentially very dangerous storm forecast for the East Coast and the Northeast United States through the beginning of February. Deep snow could blanket Washington D.C. the city of New York and further northeast towards Boston.

In our previous discussion regarding the new winter storm coming up for the Midwest this weekend, we also talked about the increasing potential for a Nor’easter storm to develop as the Arctic air mass blasts towards the East Coast. 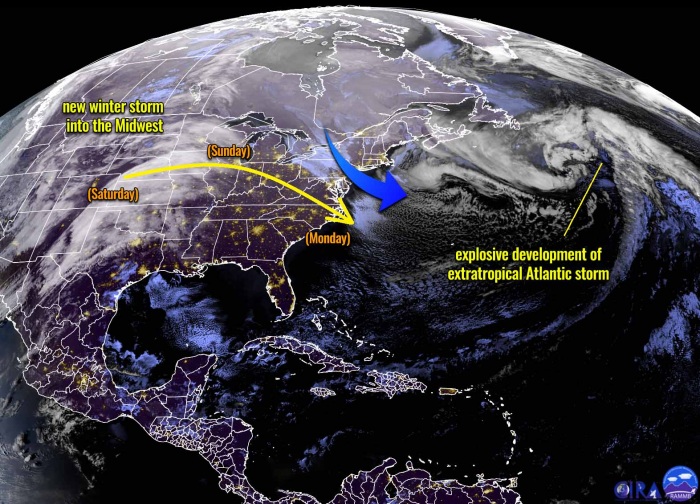 Notice also a rapidly developing extratropical storm over the Northwest Atlantic. It is moving east towards Europe. But let’s take a look at what CONUS is about to experience early next week. Now, the latest model guidance is clear – a major winter storm is expected to develop on Monday and travel along the Mid-Atlantic coast towards the Northeast on Tuesday.

The system could potentially develop a significant snow cover from Washington D.C. to Baltimore, Philadelphia, New York (including Rhode Island), and Boston through Monday and Tuesday. A deep low rapidly develops as a large upper wave emerges over the East Coast on Monday.

The potential is there for a high impact winter storm, with temperatures well below freezing, in the 20s and 30s Fahrenheit. The exact swath of the greatest snowfall strongly depends on the track of the Nor’easter storm.

Winter weather with extremely cold temperatures has emerged across the Northeast United States this Friday into the weekend, with a deep Arctic outbreak delivering the lowest temperatures of the season for the region.

The upcoming winter storm for the Midwest this Sunday will travel along the southern fringe of the Arctic cold pool and significantly intensify as the parent wave moves off the Atlantic coast. It will form into a major Nor’easter storm on Monday.

WHY AND HOW NOR’EASTER FORMS?

A Nor’easter is a synoptic-scale extratropical storm forming in the western North Atlantic Ocean. As we could assume from its name, the winds affecting the coastal areas are generally from the northeast direction. Such storms originate as a low-pressure area that forms within 100 miles (160 km) of the shores between North Carolina and Massachusetts.

They are usually accompanied by heavy rain or snow and can cause significant coastal flooding, coastal erosion, and hurricane-force winds. When heavy snowfall develops over the land, extreme blizzard conditions emerge.

Nor’easters often rapidly strengthen on the converging air masses —an Arctic cold air mass from the north and the warmer air over the water. They are more severe in winter when the difference in temperature between these air masses is the greatest. 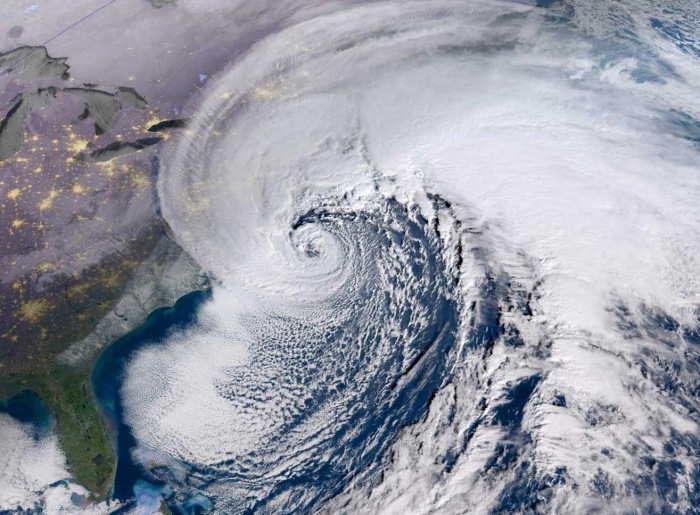 Intense Nor’easter in January’s 2018 North American blizzard. Image: NASA
So typically, Nor’easters tend to develop the most intense between the months of November and March, although they can also develop during other, non-winter months. The east and northeast parts of the United States are generally impacted by these systems a few times each winter.

Generally speaking, the Nor’easter develops in response to the sharp contrast in the warm Gulf Stream ocean current coming up from the tropical Atlantic and the cold air masses coming down from Canada.

So exactly what is happening this weekend, an intense Arctic blast spreads into the East Coast, meeting the much warmer Atlantic and leads to a formation of a rapidly developing surface depression.

In the upper atmosphere, the strong winds of the jet stream remove and replace rising air from the Atlantic more rapidly than the Atlantic air is replaced at lower levels; this and the Coriolis force help develop a strong storm. The storm tracks northeast along the East Coast, normally from North Carolina to Long Island, then moves toward the area east of Cape Cod.

FYI, in 2019, Tropical Storm Melissa became the first tropical or subtropical Nor’easter in the recorded history.

And what we could be now seeing shaping up on the latest weather models, a major Nor’easter winter storm is set to stage along the Mid-Atlantic and Northeast regions from Monday through Tuesday. Some guidance hints at a very significant snow accumulation – potentially even more than a foot of snow could blanket the areas somewhere from the Appalachians to Maine.

With the first winter storm developing across the Midwest this Sunday, the parent upper wave continues east. Thanks to the general strongly progressive pattern over North America after the Polar Vortex collapse in early January. It will be responsible for the extent of the winter weather towards the East Coast. 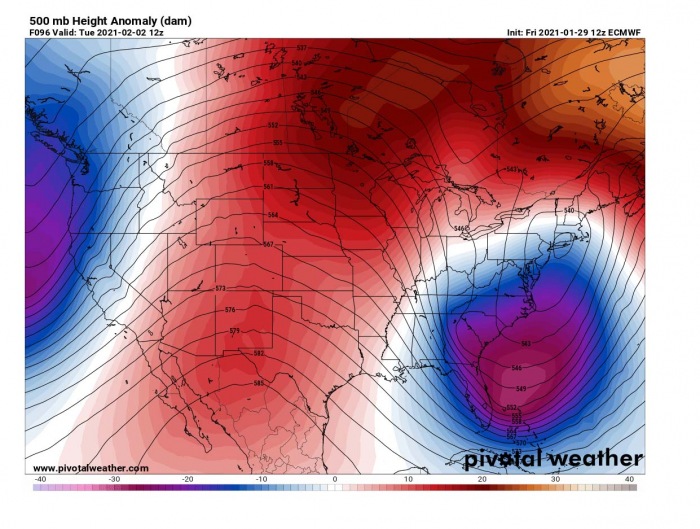 As the area of surface low-pressure begins deepening off the Atlantic coast, precipitation will increase, and so will the winds. Temperatures will remain very low, so to the northern side of the storm’s center, heavy snowfall will combine into severe blizzard conditions.

Areas along the coast and further inland from mid-Atlantic to New England coastal areas could be affected by the worst.

Where exactly the storm will travel and deliver the greatest snowfall is still a bit uncertain as the upper-level pattern is in transition mode with the Midwest winter storm developing through late Saturday. We have to be aware that just 50-100 miles shift of the storm’s center north or south (or east/west) bring significantly different weather for the coasts. 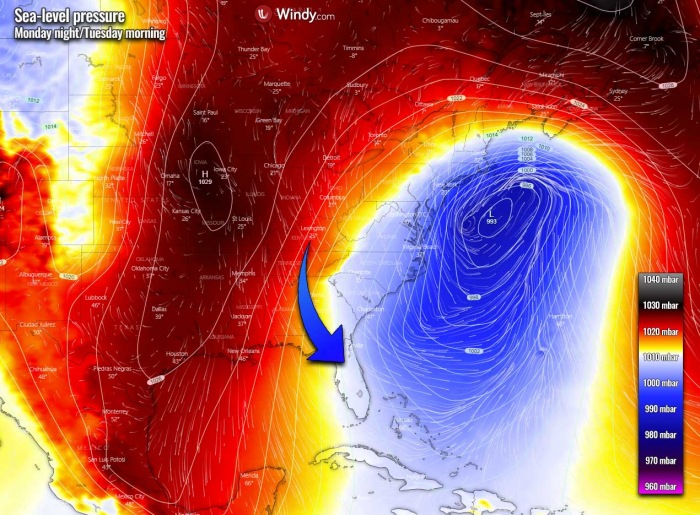 Normally, there are two scenarios possible regarding the track of the storm. If the system tracks off the coast farther east, it develops the swath of heaviest snowfall along with the coastal areas and areas to the immediate inland.

Another scenario is if the storm travels closer to the coast, which means that the heaviest snowfall then develops farther inland, and the coastal areas are spared of the worst hit. So the greatest snow accumulations develop from the central Appalachians to interior parts of New England, with potentially even rain on the coast.

As the weather model guidance is hinting so far, the track of the Nor’easter storm will stay a bit east/southeast of the coast. In general, this means heavy snowfall could be a combination of both scenarios, so across the area from Washington D.C. along the Interstate I-95 corridor to Boston. Including Baltimore, Philadelphia, and New York.

As we could see from the attached 5-day snowfall totals above, the greatest snow is forecast from the central Appalachians with the worst across New York and further into New England. So basically this is a typical appearance of the scenarios-combo with the busy Interstate I-95 corridor from Washington D.C. to Boston being right in the swath of the heaviest snowfall.

Potential continues to increase for a heavy snowfall of 6 inches or more, with snow-covered roads, poor visibilities, and very difficult travel conditions. The potential for strong winds and coastal flooding is also increasing.

The heavy snowfall event will emerge from southwest to northeast from late Sunday night into Monday morning, possibly impacting the Monday morning commute. The greatest snow from Monday afternoon and night with the highest potential for heavy snow of 6 inches or more for the New York City metropolitan area and Long Island. Worst case snowfall scenario would be a foot of snow (up to 12 inches) in places.

This also means that snowfall will be wet and heavy closer to the storm’s center, along with the coastal areas. While being drier further inland and help the winds to result in severe blizzard conditions.

The storm will be drifting northeast into Tuesday with a quite strong cold blast into the Southeast United States and also Florida in its wake. If we take a look over the temperature forecast for early Tuesday, it reveals a really impressive contrast between the tropical air mass coming up from the western Atlantic. While much colder air mass is being advected across the eastern parts of the country. 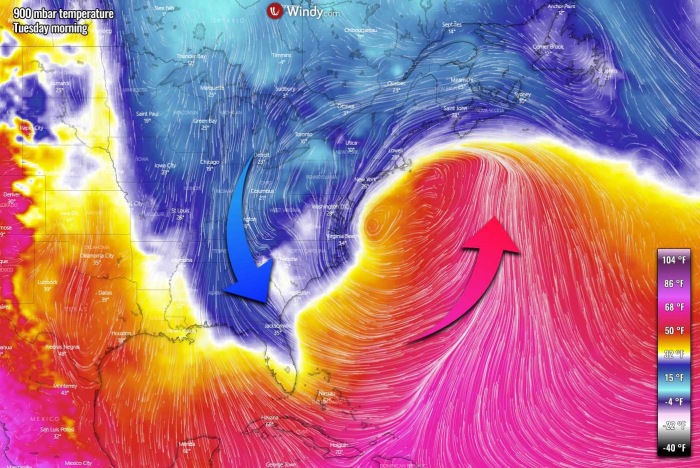 This is a textbook example of a fully developed Nor’ester as we discussed above. The interaction of the Arctic air mass coming from the north and the tropical air mass from the south, develop a major storm.

The chart also includes the near-surface wind trajectory to better represent the motion flow with the situation. We can also see tight streamlines along the Atlantic coast from Virginia to Maine and Nova Scotia, that is where blizzard could develop.

So, if the storm tracks along the more east-northeast trajectory, the most intense snowfall could bring the worst weather with very heavy snow and severe blizzard conditions towards New England.

Nevertheless, there is an increasing potential that at least a few inches of snow will accumulate along the broad corridor from the central Appalachians to Maine from Monday to Wednesday.

There are also some chances for freezing rain or sleet in the coastal areas, but it strongly depends on how far north the warm air mass will arrive. While cold, below-freezing temperatures, will maintaining northeasterly winds with the strengthening pressure gradient towards the storm’s core.

This winter, the snowfall statistics have not been too impressive in parts of the Mid-Atlantic region actually. If we just take a look at the nation’s capital Washington, D.C. data, not even a half-inch of snow has accumulated so far this season. That’s far below the average of just shy of 8 inches by the end of typical January.

For instance, the city of New York further northeast is almost 11 inches of snow, which is about the average for the winter season. So as we can see from the current trends, New York could step ahead quite some if this significant snowfall verifies over the city.

The potential is definitely there it that the areas from Washington D.C., Baltimore to Philadephia and New York receive even more than a foot (10-15 inches) on Monday and Tuesday.

While rather uncommon, the further progress of the Nor’easter storm after it gains the strength of Tuesday will not be particularly fast. In other words, this means that snowfall will persist and maintain across many hours (12-18 hours in some areas), that’s why the final snow accumulations are forecast to be quite high.

But the system will be intensifying and the further advection of very moist air mass will continue towards Nova Scotia and Newfoundland. Very heavy precipitation will develop towards Tuesday night into Wednesday morning, of both mixing precipitation, freezing rain, and heavy wet snow.

Although winds will also be increasing there, blizzard conditions will be less robust than across the areas further west of Maine as it needs drier snow which reduces visibility significantly. 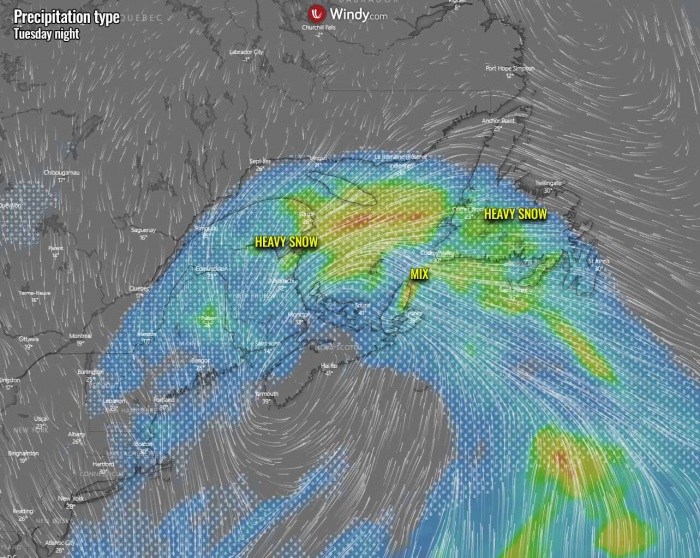 At least a few periods of dangerous weather conditions will likely develop, nevertheless. How intense where and what precipitation state is hard to predict until the storm actually strengthens into a major Nor’easter along the Atlantic coast on Monday.

But one thing is sure for Wednesday. The Nor’easter will continue growing and strengthening, thanks to the fueling storm from the warmer Western Atlantic and indeed the maintaining advection of very cold Arctic air mass from Canada into the eastern portions of the United States. 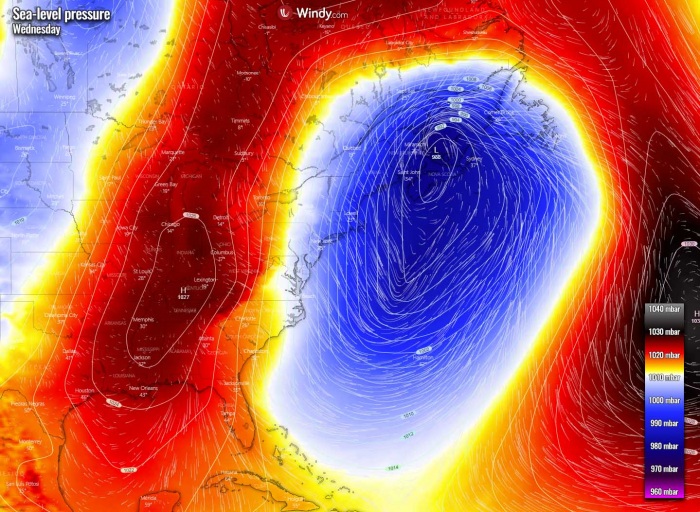 Then the storm is expected to mature through Wednesday night into Thursday and gradually weaken as its center moves across Newfoundland and ejects into the North Atlantic.

***The images used in this article were provided by Windy, Pivotalweather, and NOAA.