More than a foot of snow hit parts of Nebraska and Iowa on Monday, making it a historic event for the area. Now, weather models call for another major winter storm with deep snow likely for the weekend. And a significant Arctic outbreak with frigid cold temperatures for the Northeast.

The general pattern over North America remains progressive. In other words, this means we are seeing system after system moving from west to east. One winter storm just decaying, there is already a new one emerging for the Midwest this weekend. Meeting with a strong, frigid cold Arctic outbreak over the Northeast United States. The result will likely be a major winter storm from Midwest towards the East Coast.

Earlier this week, the recent winter storm hit the Midwest with some remarkable amounts of snow on Monday into early Tuesday.

HISTORIC SNOW FOR THE MIDWEST

The National Weather Service in Omaha and Des Moines reported that the winter storm over their part of the Midwest was a historic event. Precisely across east-southeast Nebraska and south-central Iowa. This area has not seen such a snow amount in one day since 2005.

The frontal system has emerged from the Rockies and intensified over the Great Plains. As discussed in one of our articles, the highest amount was expected to dump nearly a foot (12 inches) of snow across parts of the Midwest. Finally, a major winter storm verified with the snow totals even more than a foot (18 inches in some places) across southeastern Nebraska and southern Iowa.

The area stretched from northern Kansas across southeastern Nebraska to Iowa was hit by the worst snowstorm, with numerous road incidents reported, including severe crashes and injures. Driving conditions were very difficult at times due to very high snowfall rates. Power outages also occurred. 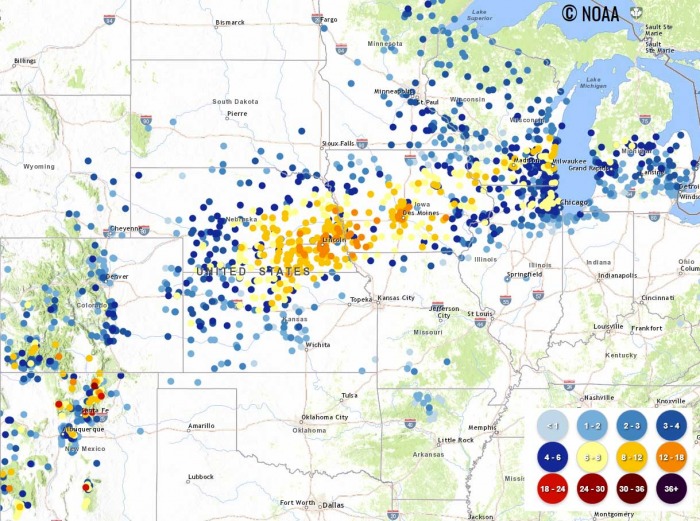 The city of Omaha, Nebraska has reported 11.9 inches of new snow on Monday, the highest amount of snow in a single calendar day in the last 45 years. On January 10th, 1975, 12.1 inches of snow accumulated. By Tuesday morning, Omaha hit a total of 12.5 inches, the storm finally vanished.

The city of Des Moines, Iowa has seen over 10 inches of snow on Monday. By Tuesday morning, Des Moines finished at a total of 12.9 inches. Monday snow over the city of Clarinda, Iowa has been the snowiest day for over 100 years.

Further east, the O’Hare International Airport, Chicago (IL) recorded 6 inches of snowfall by Tuesday evening when the winter storm finally ejected towards the east and weakened.

But now, the weather model forecast calls for another major snowstorm coming up for the weekend, with the potential for additional deep snow for the Midwest and towards the East Coast.

This January surely is taking its role of the real winter month across the Midwest very seriously. As we have seen above, a historic snowfall was not enough for Nebraska and Iowa. Now, there is another large storm system set to affect the region this coming weekend.

Just like the last winter storm did, the upper waves eject off the deep trough over the West Coast and accelerates into the central portions of the United States, strengthening into a potentially major snowstorm.

The reason to concern is that the wave pushes into the Midwest right in time when a very significant Arctic cold outbreak develops for the Northeast United States and Mid-Atlantic region. 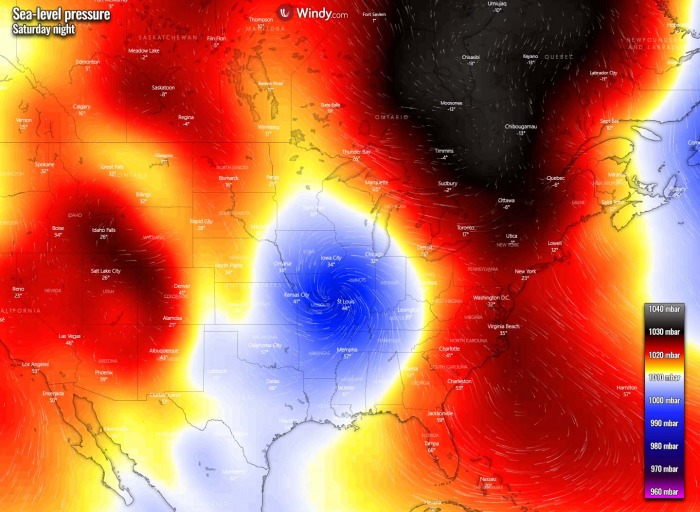 The next storm could hit the same areas that got buried in deep snow earlier this week, so that would put the monthly snowfall totals even higher. For instance, as we have seen above, parts of Iowa could challenge the record values.

Therefore precipitation increase is likely across Iowa and Illinois, although the type and amount of precipitation are still quite uncertain at this time. Nevertheless, there is a strongly increasing probability of accumulating (deep) snowfall somewhere across the south-central portions of the Midwest. The exact details of timing, location, and snow amounts are yet to be defined, but odds for a new significant snowstorm are rising.

The snowstorm develops over the Midwest on Saturday and continues to strengthen while the system gradually turns east-southeast through Sunday. The chart above hints at an approximate precipitation type and intensity on Saturday Eve (left chart) and Sunday Eve (chart on the right). Very heavy snowfall could occur, with high snowfall rates. Also combined with strong winds, so whiteout conditions and strongly reduced visibility or 1/4 mile or even less.

With the advection of warm air mass from the southern Plains and Mississippi Valley, there is also some potential for heavy mixed precipitation or even freezing rain along the southern edge of the frontal zone.

The type of precipitation will depend on the very large and strong cold pool in the northeast, associated with the cold outbreak ongoing there on Friday. So the storm literally blasts high moisture into the cold air mass. See details on this matter a bit further down.

Overall, the system could result in another major winter storm event from the Midwest towards the Ohio Valley and could dump a huge amount of snow from early Sunday through Monday while it drifts towards the East Coast. The latest model guidance hints at a broad swath of potentially high snowfall accumulation, roughly from Iowa across Illinois, Indiana, and Ohio and further towards the Appalachians and the East Coast.

FRIGID COLD OUTBREAK FOR THE NORTHEAST

Before the upcoming winter storm takes place, yet another Arctic cold blast will push across the Great Lakes into the Northeast and the East Coast of the United States. Delivering extremely cold air mass from Canada. Thanks to the so-called Omega ridge blocking pattern developing over the central parts of the country. 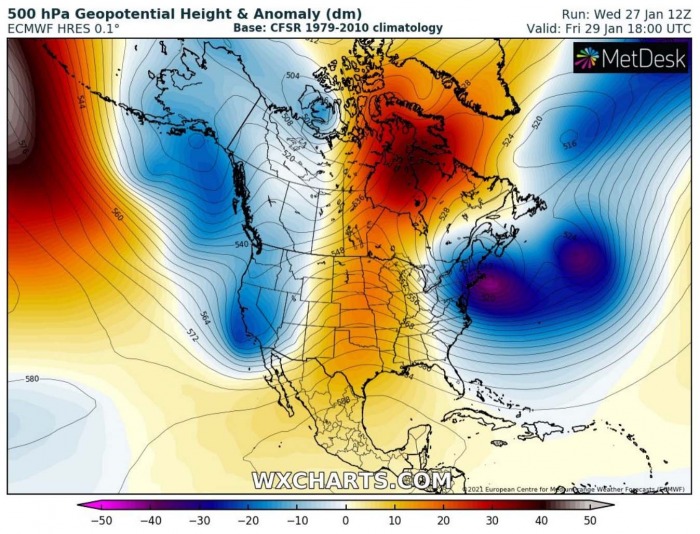 Such a pattern normally has two troughs to its left and right, as we can see on the chart below. One trough is sitting over the West Coast while another one develops into the East Coast and over the Northwest Atlantic.

Notice there is actually a connection of the CONUS ridge with the persistent powerful High over the Canadian Arctic region. This strong ridge has been persisting for weeks now, related to the Polar Vortex collapse which occurred in early January.

Once the trough digs further into the Northwest Atlantic, the storm rapidly strengthens into a very deep extratropical Atlantic cyclone. This creates a strong pressure gradient between the upper High and this strengthening low, helping the Arctic outbreak to intensify and spread into the Northeast United States. 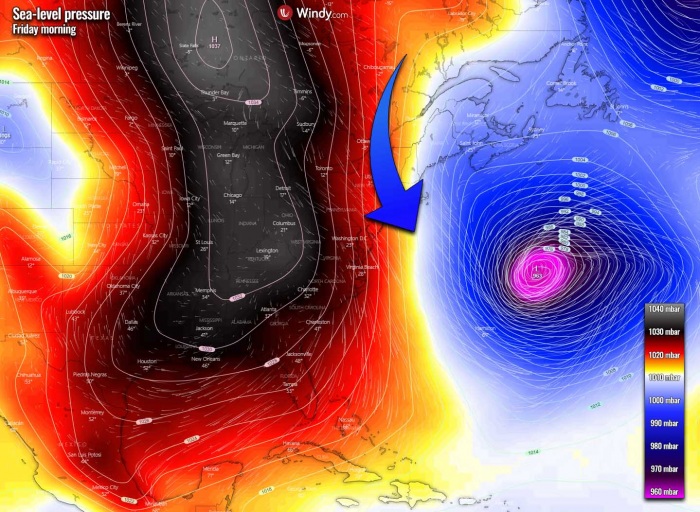 The air mass in the lowest parts of the troposphere will be very cold, nearly 15 °C colder than normal for late January. Keep in mind this time of winter is very cold already, so it just shows how intense the outbreak arrives. We can also see much warmer air mass across the central parts of the CONUS under the ridge, extending towards Arctic Canada this weekend. 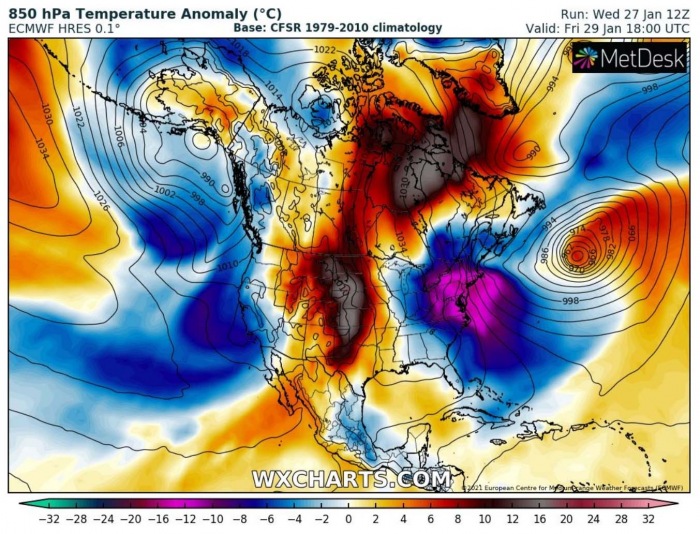 It will be *very* cold on Friday and Saturday, potentially even frigid cold with much below freezing temperatures during the daytime, even along the Mid-Atlantic region Coast. For example, the city of New York and Boston could stay around 15-20 °F (-6 to -10 °C) during the peak of the day. With indeed even more extreme cold in the morning hours, both on Saturday and Sunday.

The attached chart below reveals the potential minimum temperatures on Friday morning. Likely around 20 °F over Washington D.C., Around 10 °F over New York and around 5 °F (-15 °C) around the city of Boston. It will be similar or just a tad warmer on Saturday morning. 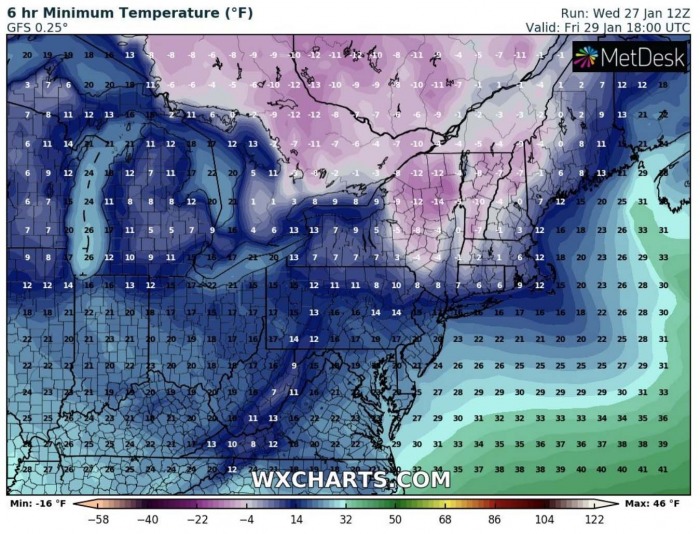 Actually, these temperatures could challenge the lowest temperatures of the winter season 2020/21 so far, and it has been a very rough winter so far. Remember, those temperatures were actually recorded just last week, in mid-January.

With the Midwest winter storm advancing towards the east over the weekend, it will help to deliver high moisture towards the East Coast and Mid-Atlantic as well, meeting the Arctic cold air mass. Therefore as the system tracks along the edge of the cold pool, snowfall will continue all the way to the Atlantic Coast.

Winter precipitation mixture of snow, rain, or freezing rain will spread into the Appalachians and mid-Atlantic region through Saturday night into Sunday morning. As the system is still a couple of days ahead, there are some serious uncertainties about how the winter weather evolves along the Mid-Atlantic region.

Some scenarios hint at a Nor’easter storm developing over the Atlantic early next week. If this happens, that would mean snowfall will extend and intensify across the Northeast through Monday and Tuesday.

We are monitoring the pattern evolution if this scenario could develop, and will keep you updated. Stay tuned!

*** The images used in this article were provided by Windy, Wxcharts.com, and NOAA.