The coldest temperatures of this winter are coming up for the northern parts of the Lower 48 this weekend. Thanks to a bitter cold coming down with the Arctic outbreak over Canada, moving towards the United States. Arriving soon after yet another major winter storm with heavy snow across the Midwest. The temperatures will plunge extremely low, with Highs staying below zero on Sunday and dangerously low wind chills.

It didn’t take long to get a new potential severe winter storm into the Midwest. Actually, just a week after the last winter frontal system, which has brought a historic snowstorm with more than a foot of snow for parts of Nebraska and Iowa.

And only three days after a major snowstorm – Nor’Easter – which brought more than 2 feet of snow across the state of New York and the Mid-Atlantic region this Monday. Cold is spread behind it across the eastern United States. 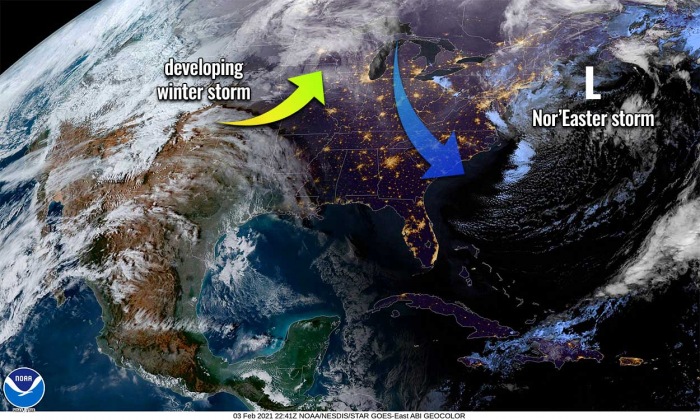 The new Midwest winter storm system will emerge northeast from the Great Plains and dump a high amount of snow, especially across Wisconsin Thursday night into Friday morning. It will just add more snow for areas already covered in deep snow lately.

Below is Wednesday’s visible channel satellite view of the snow coverage across the Midwest and the Great Lakes region. We can see a broad stretch of snow cover from eastern Nebraska across Iowa to Ohio Valley (stronger white). 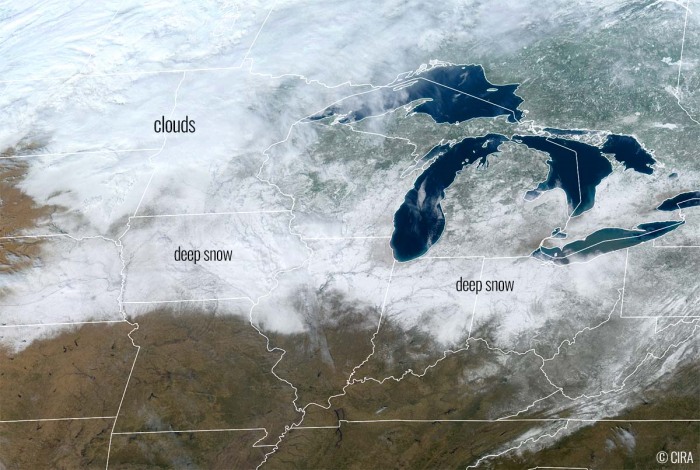 After this storm passes, a frigid Arctic cold outbreak will be on the way for southern Canada and the northern half of the United States this coming weekend. This will be the first of its kind this winter season as extremely cold temperatures are forecast. Parts of the upper Midwest could see low temperatures reaching below the -20s with wind chills even lower than -50 °F.

Minneapolis (MN) will have below zero Fahrenheit during the day on Sunday, while Chicago (IL) will see sub-zero morning temperatures over the weekend as well. With Highs just shy above zero F.

Normally, 850 mbar temperature anomaly charts are used for presenting the significant temperature changes, in both cold or warm air mass outbreaks. Here is the video animation of the upcoming cold outbreak through the next five days. The anomaly is very impressive and will bring extremely cold temperatures for the northern states and the Midwest:

This is a clear signal of how active the frontal systems are lately. Thanks to the disrupted dynamics in the higher atmosphere, the Arctic blasts took the winter season seriously this year. And it might be far from over, as trends do hint the extreme cold and favorable winter pattern could stay for weeks. Through much of the final meteorological winter month.

These dynamics have a reason why the patterns are like they are lately. The answer lies in the Northern Hemisphere’s circulation aloft – the stratosphere.

Followed after record-breaking high and low-pressure events over the North Pacific and Asia, the Polar Vortex collapsed in early January. The anomalies of the large mesoscale systems were so extreme that they pushed the atmospheric waves up into the upper parts of our atmosphere, called the stratosphere. The result was a major Sudden Stratospheric Warming (SSW) event. 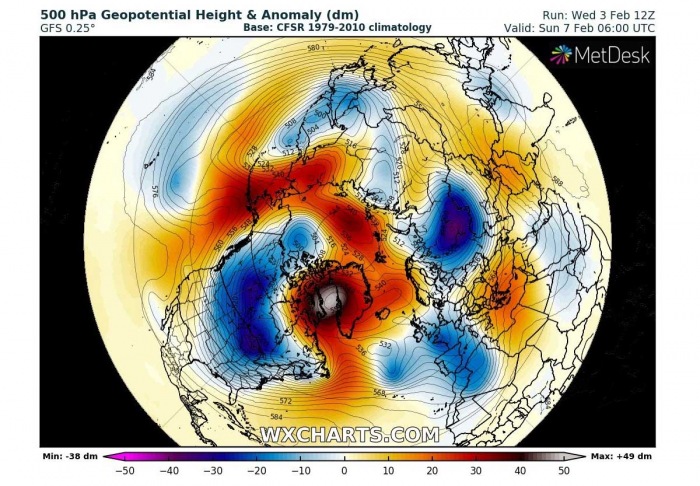 After the collapse, the weather patterns across the Northern Hemisphere have become very dynamic. A strong blocking High developed over the Polar/Arctic region and is also extending into February. It has a very strong surface high-pressure system built over Greenland and Canada. Quite typical for a negative Arctic Oscillation (AO index) phase which is the cause for the cold outbreaks towards the south over the past few weeks. And it is forecast to continue.

But now, as we can see above, the general pattern is setting a stage to a deep trough and release a tremendous amount of Arctic air mass into southern Canada and the United States this weekend into early next week. While a winter storm will bring new snow for the Midwest on Thursday, a frigid cold air mass will follow just a day after and significantly intensify over the weekend.

NEW WINTER STORM AND BLIZZARD FOR THE MIDWEST

Parts of the Midwest are still under a deep snowpack from the historic snow last week, with barely any melting of the snow. New snow is on the way as a frontal system will emerge across the central parts of the Contiguous United States and move into the Midwest while rapidly intensity this Thursday. 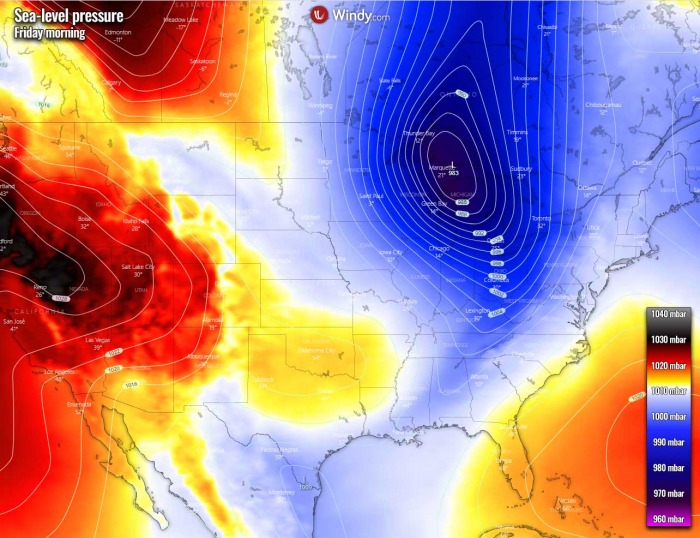 The wintry precipitation will increase across the western portions of the Midwest from Thursday afternoon and spread towards the northeast into the evening hours and Thursday night. Heavy snow with dangerous blizzard conditions will develop.

Winter Storm Warnings, Winter Weather Advisories, and Blizzard warnings are in effect from Nebraska to Upper Michigan with the highest snowfall rates overnight. 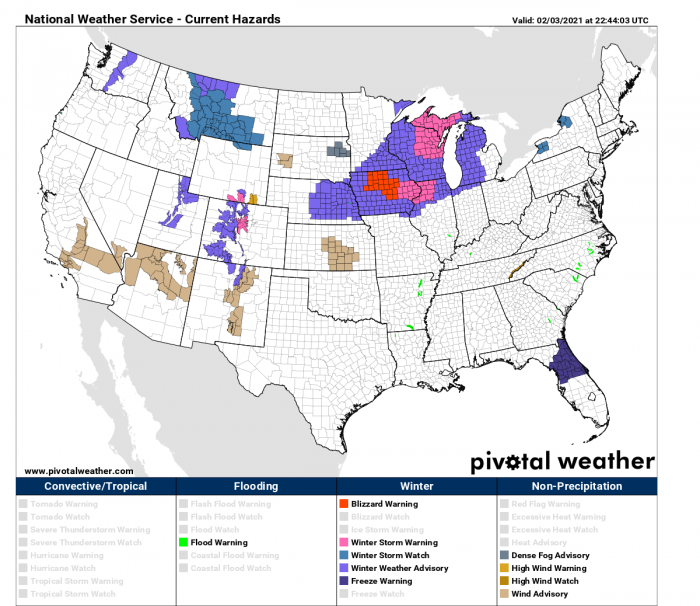 The Upper Midwest will be the worst hit this time, as about 5-10 inches of snow is likely from eastern Minnesota across Wisconsin into Michigan. The greatest snow will develop over the northern half of Wisconsin and the areas further north. Even close to 12-15 inches of snow could be locally possible across the far northern Wisconsin and northern Michigan. 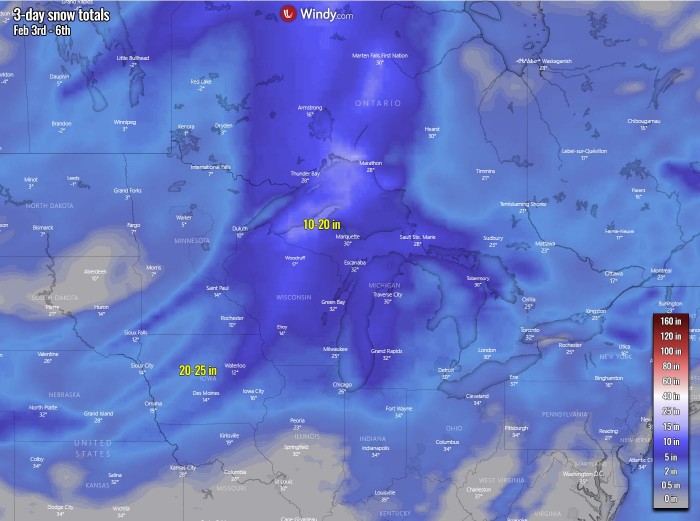 Strong winds will be accompanied by this winter storm, as the central pressure will deep into the low 980s, boosting the pressure gradient around its core. This will develop blizzard conditions and significantly reduced visibility, disrupting travels by both blowing snow and high snowfall rates.

Around Lake Superior, these cold winds blowing over the warmer lake will introduce heavy lake-effect snow and could bring even 20-30 inches of snow totals by Friday evening.

The winter storm will grow very large on Friday while drifting northeast into Canada. Thanks to the low central pressure, winds will further increase against the very high surface-pressure system over the Arctic Canada further north. The pressure difference between the still deepening low over the Great Lakes and the Canadian High will be huge, nearly 70 mbar. 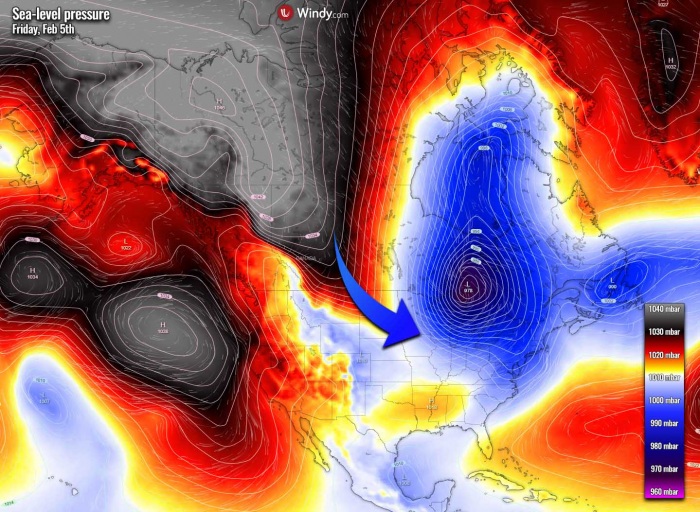 Basically an ideal recipe for the intrusion of a very cold air mass towards the United States. The bitter cold will start its progress into southern Canada on early Thursday, will temperature change going down very fast.

As we can see by the forecast for Regina (SK), Canada, the change from tonight through Saturday 6th will be more than 25 °C, becoming 20 below normal over the weekend. The cold pool will be large and persist into next week there. 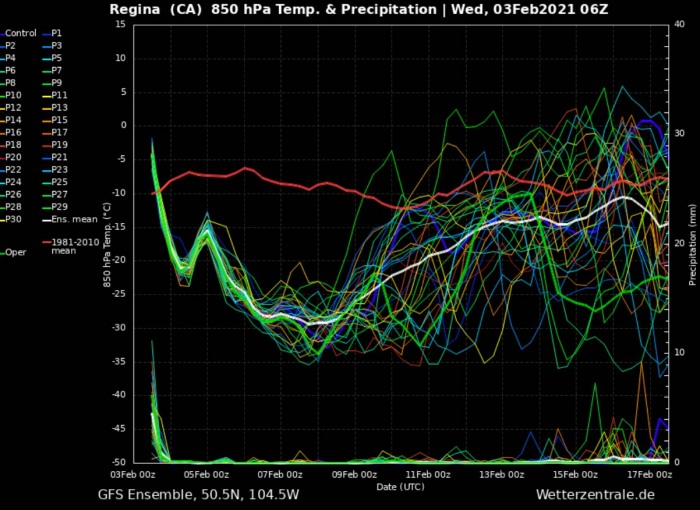 So, the general flow on Friday will become north-northwesterly, meridional, and the advection will drag much colder air far south into the weekend and intensifying. Many across the northern parts of the United States are about to experience very cold days after Friday, with nearly 30 degrees Fahrenheit lower temperatures than have been reported this winter.

DEEP FREEZE FOR THE WEEKEND

A polar jet stream will spread the coldest temperatures into southern Canada throughout will continue into Minnesota and the Northern Plains. Starting this Friday, but the worst cold will hit over the weekend and is also expected to continue into the early days next week. The coldest air of this winter is expected for the Dakotas and parts of Minnesota.

The significant cold will keep the Friday’s Highs in the single-digits in some parts of the region. And it will get even colder each day until Sunday. The last day of the weekend will likely keep the highs across Minnesota below zero, making it the coldest day of the winter season. With the morning lows even more frigid through Sunday and also on Monday. Potentially -20 to locally near -30 °F there. 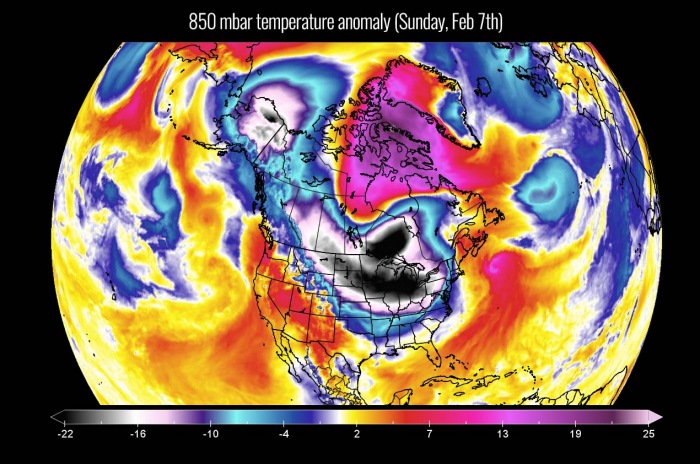 Further south, the most significant cold will keep spreading across the Midwest on Sunday into Monday, also into the western Great Lakes with the near-surface temperatures about 30-40 below long term normal for early February. 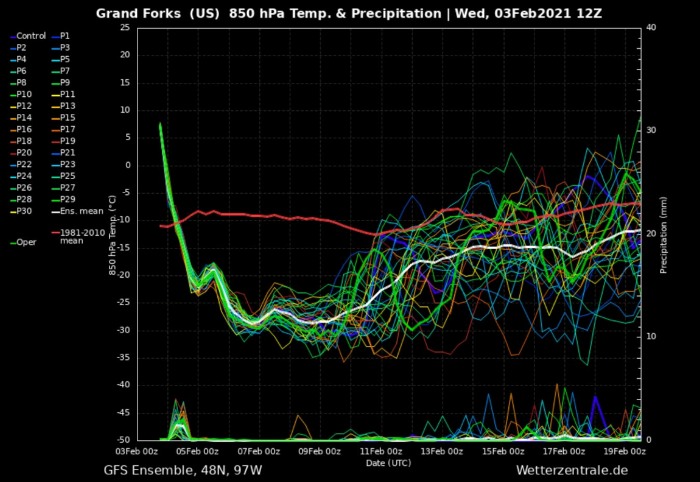 More than 30-degree temperature change will spread across the Dakotas, as we could see from the Grand Forks (ND) forecast chart above. While temperatures tonight are near +7 °C at the 850 mbar level (approx. 1300 m ASL), they will push below -25 °C over the weekend. It will be dry cold and windy.

Windchills, the real feel of the apparent temperature, will be even more extreme. Much more. The air mass will, thanks to some north-northwesterly winds, feel like 40-50 below at the time over parts of Northern Dakota and Minnesota. Below -50 °F across southern Canada and beyond exceptional further north. Even close to -80 °F! 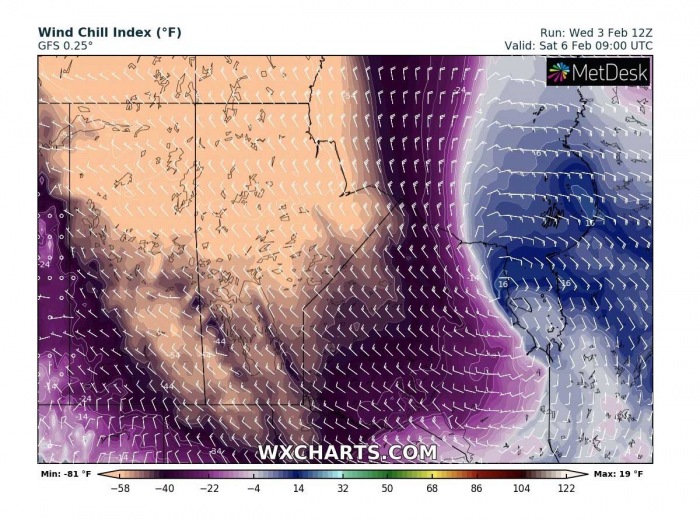 Such cold will be extremely dangerous and life-threatening for the outdoor activity. Temperatures will be low enough to produce frostbite on exposed skin within 30 minutes and may lead to hypothermia. Dress in layers to help keep you warm. Especially as cold winds will make things even worse.

ANOTHER NOR’EASTER FOR MID-ATLANTIC?

Some weather models are also increasing the potential for another Nor’Easter winter storm along the Mid-Atlantic Coast on Sunday into Monday. This evolution depends on how deep south the jet stream will push the upper wave and Arctic cold blast.

It may lead to a new surface depression off the East Coast that would mean a significant snowstorm for the same areas that were badly hit by 2 feet of snow this week.

However, this is still rather far in advance, four to five days from the time of writing this update, so a lot of uncertainties remain.

We are moniting how the pattern develops – stay tuned for the updates!