A massive amount of Saharan Dust has advected across the Mediterranean into central Europe this weekend, thanks to the favorable pattern turning the jet stream into southerly directions. High dust concentrations have turned skies and snow to orange across southern and central parts of Europe, creating an apocalyptic scenery.

It has been a dynamic pattern establishing across Europe this week, with a persistent upper-level High over the Arctic region and northern Europe. But to the south, an atmospheric river is dragging storm systems from the Atlantic into the southern parts of Europe.

One of these systems has deepened across southwestern Europe this weekend and turned the jet stream into south-southwesterly directions. This means the flow comes directly from the Saharan desert and it normally raises the potential to receive Saharan Dust particles across the European continent.

This time, the result is the significant advection of Saharan Dust into the Mediterranean region and into central Europe. Including the Alps and areas further north where reports of orange snow and skies are coming from the public. 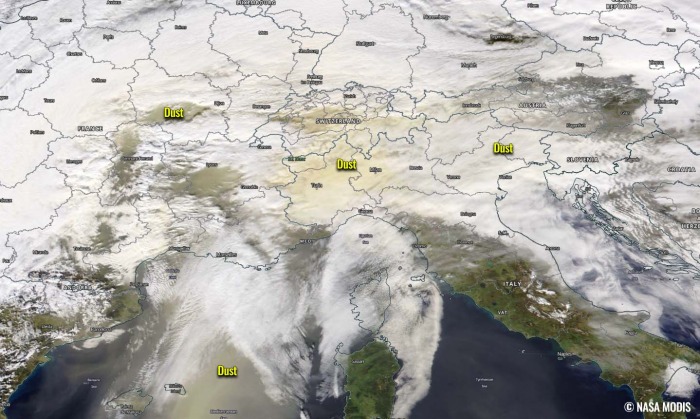 The NASA MODIS satellite image above indicates an impressive advection of Saharan Dust into the northern Mediterranean, expanding north into the Alpine region and central Europe. The dust has already been detected across central France, Swiss, southern Germany, Austria, and also northern Balkans by Saturday afternoon. It keeps pushing north and east tonight.

The Saharan Dust load will be the most intense into Saturday night, then gradually diminishing while the dust spreads further north and east on Sunday.

The general weather over Europe hints at a developing progressive pattern with a continuous train of frontal systems crossing the Atlantic into the southern portions of Europe.

Thanks to the blocking pattern further north, with a classic locked-in pattern across the Arctic region, delivering much colder air mass into Scandinavia, eastern Europe, and also further west towards the North Sea and the UK.

The first wave has emerged into southwestern Europe with a surface low over France. 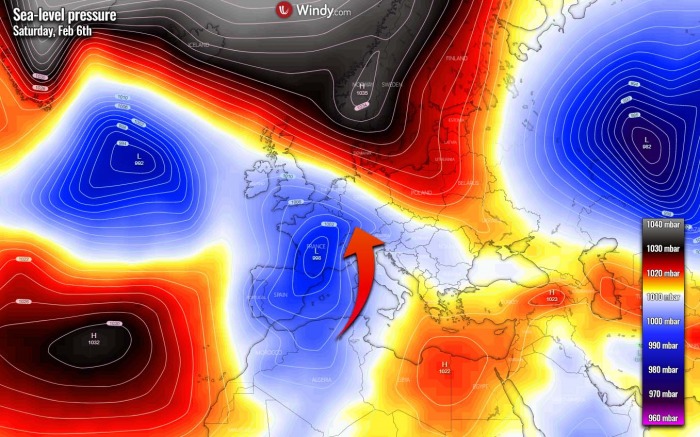 The flow ahead of it has turned southerly, from north Africa into central Europe. Further north, a high-pressure system helps the flow then turning northwest and east. The wave is actually quite deep which intensifies the jet stream on its eastern flank. Notice its most intense part is over Algeria, directly over the Saharan desert.

Note: This frontal system will also bring a lot of rain into the northern Mediterranean region, including quite some fresh snow over the Alps until Monday. While at the same time, advection of the very cold continental Polar air mass will continue from northeast Europe towards western Europe this weekend into early next week. 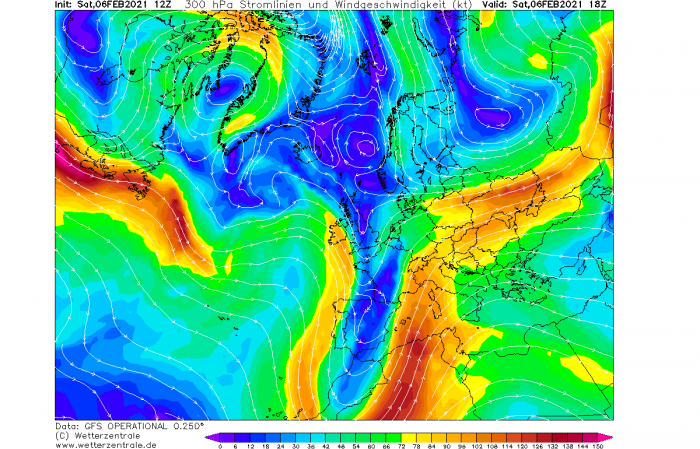 This typically means that strong winds pick up Saharan Dust particles and drag them farther north into the Mediterranean. If the pattern helps further flow north, dust is brought into central Europe.

Such a situation has resulted in this weekend, as Saharan Dust has been observed across the Alps, as well as surrounding countries. Below is one example from the Swiss Alps: 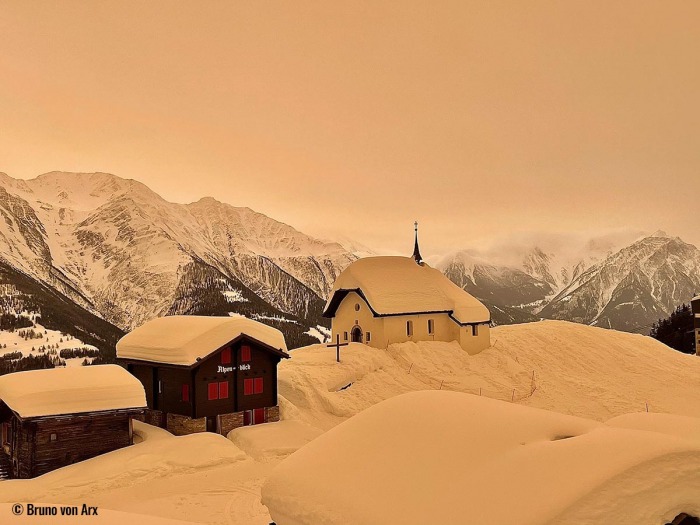 Attached below is a wide-angle satellite view of the Saharan Dust advection this Saturday. Dust is advecting across the west into the northern Mediterranean, expanding across the Alps and central Europe and further north. See the video animation we posted earlier above. Satellite is provided by NASA MODIS. 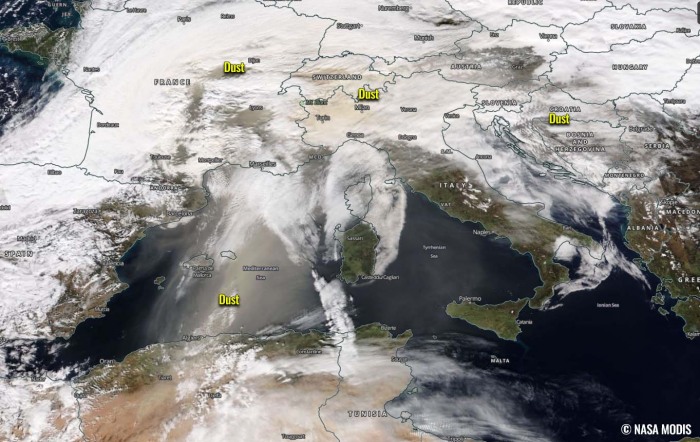 The highest concentrations of dust particles have been observed east of Baleric Islands, northwestern Italy, Switzerland, southeast France, and western Austria. Skies have turned orange in many areas.

As the winds keep pushing the Saharan Dust north and east tonight, it will likely reach Benelux, central Germany, Czech Republic, and Hungary as well by Sunday morning. Weather models have nicely covered this event with the highest Saharan Dust concentrations over the western Alps, eastern France, and southern Germany this Saturday. 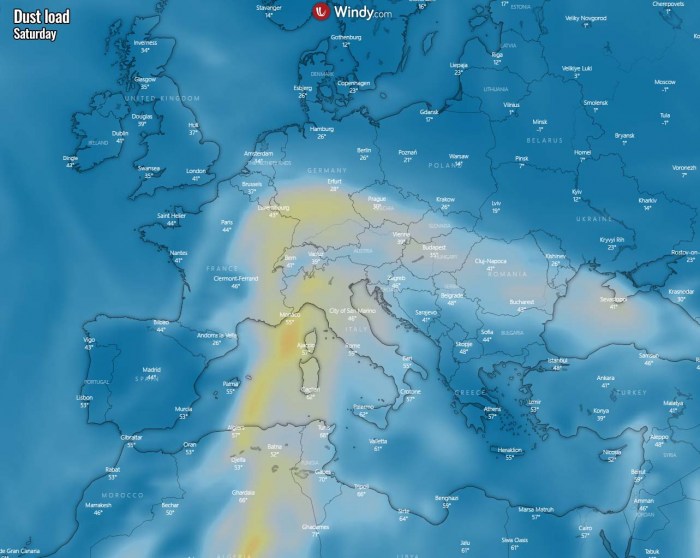 Part of the dust load is also expanding into the Balkan peninsula today, but it less dense as the strongest southerly advection is across the Mediterranean into the Alpine region.

With the progress of the trough/low further northeast on Sunday, the Saharan Dust load advection will spread east, so the highest amounts of dust will spread across Italy into the Balkan peninsula. 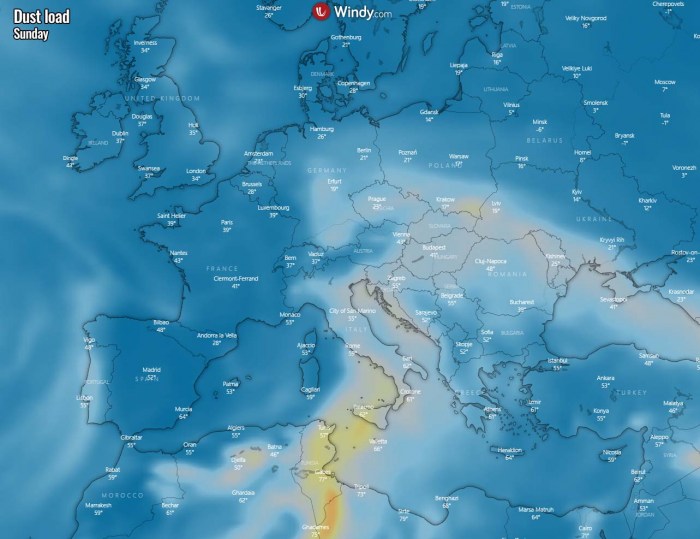 Dust particles are likely to be detected as far north and northeast Germany, south-central Poland, and Ukraine on Sunday. It may not be a surprise to see some Saharan Dust particles also in parts of Benelux and England.

***The images used in this article were provided by Windy, Wetterzentrale, and NOAA.