An explosive development is underway with the very first Pacific typhoon over the Philippines Sea this weekend. Typhoon Surigae is packing 115-120 knots of sustained winds and has become a violent tropical cyclone. It will become a powerful Category 5 typhoon before turning towards the northern Philippines on Sunday and Monday. Surigae is the first typhoon of the 2021 Pacific season.

Based on the latest satellite data observation, typhoon Surigae has already reached its maximum sustained winds of 115-120 knots, a 50-knot increase in the last 24 hours. Central pressure is below 940 mbar. Typhoon Surigae is increasingly likely becoming a Category 5 system over the next 24 hours, earning the Super Typhoon status according to the weather model and satellite analysis.

This would then be the first Category 5 system on Earth this year. The last tropical cyclone that struck the Philippines was a real monster, a Category 5 typhoon Goni. Goni was a Super Typhoon with 170 knots winds, becoming one of the most powerful tropical cyclones ever recorded on our planet.

The Eyewall Replacement Cycle (EWRC) with Surigae is almost finished this Saturday morning (local time) which will help the typhoon to gain even more strength and probably continue with its rapid intensification. As soon as the large eye warms and clears, an even faster intensification rate could take place. Typhoon Surigae may reach 130-140 knots when the peak will occur on Sunday. 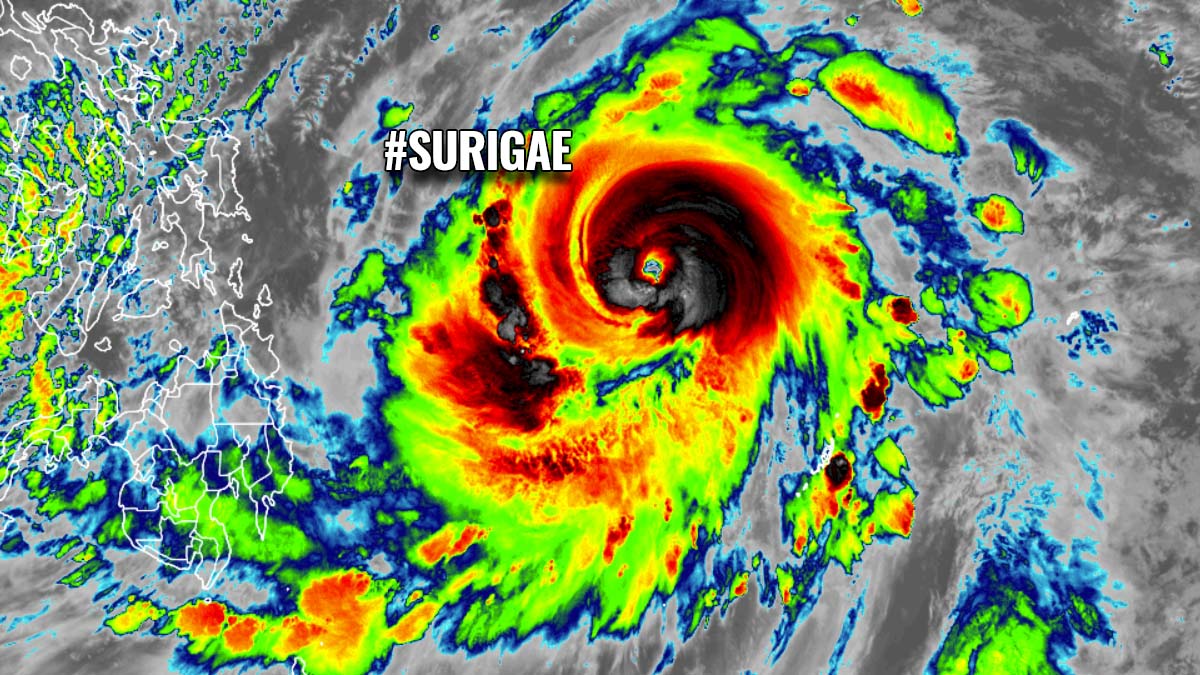 Surigae also got its secondary designated name Bising after entering the tropical area monitored by the Philippine Meteorological Agency (PAGASA). Typhoon Surigae is also the first tropical cyclone that formed anywhere in the northern hemisphere this year.

Very favorable oceanic and environmental conditions are present ahead of its track this weekend, which will help to boost its intensity even more. The wind shear is also very low, so we are basically seeing near-ideal conditions for a rapid intensification until Surigae strengthens to the maximum, Category 5 strength.

Typhoon Surigae remains an extremely dangerous system for the Philippines late this weekend into early next week as it nears the northern parts of the country. It may blast into the north-northeast Philippines with a massive amount of rainfall and violent winds with life-threatening storm surge.

In a typical year, about 8 tropical cyclones threaten the land of the Philippines, the highest number of tropical systems that strike any country around the world.

The sea surface temperatures over the western Pacific are very warm lately, even extremely warm/hot further west towards the Indian Sea. Temperatures are reaching about 29 to 30 °C (84-86 °F). Hot seas with temperatures even above 31 °C (87 °F) are seen over the Gulf of Thailand and the Andaman Sea.

These are definitely strongly supportive oceanic conditions for the very rapid intensification of any tropical cyclone. This is also the main reason why Surigae has literally exploded into a powerful Category 4 typhoon this Friday and is likely going for the Category 5 strength soon.

On both charts above, notice also how cold waters are still present over the Bering Sea and the Sea of Okhotsk, being still partly frozen. Thanks to frigid Arctic conditions still in place that far north through this mid-April.

Another factor that has significantly increased the chances for tropical development over the western Pacific is the so-called MJO wave. The wave coincides well with the above normal sea temperatures over the Pacific. The Madden-Julian Oscillation (MJO) is the largest and most dominant source of short-term tropical variability. An eastward-moving wave of thunderstorms circles the entire planet on the equator in about 30 to 60 days.

The MJO consists of two phases, one is the enhanced rainfall (wet phase) and the other is the suppressed rainfall (dry phase). This means that there are increased storms and a lot of rainfall on one side and reduced storms and drier weather on the other side. The wet phase leads to diverging air parcels while the dry phase brings converging air parcels. This horizontal movement of the air is referred to as the Velocity Potential (VP) in the tropics.

The graphics below, provided by Michael J. Ventrice, Ph.D. represent an MJO wave with filtered VP200* anomalies (see details below) for the current state, for the week 1 forecast, and for the week 2 forecast.

Notice how extremely deep the MJO wave is over the western Pacific. Undoubtedly we can see this is a very significant signal of the upward motion, supporting vigorous convection in the region where typhoon Surigae formed.

Another important factor is the Ocean Heat Content (OHC). The OHC takes into account the depth of the sea, and how warm the water layers are deep below the sea surface. Lately, we can see a large pool of high available oceanic heat energy with a very warm water layer running down quite deep over the Philippine Sea. Taking a closer look, one can see how Surigae is moving right into the very favorable conditions this weekend.

Deepwater is also quite warm which typically provides a very favorable environment of a thick layer of warm water. Tropical systems are fueled by these warm layers, as deep convective storms draw energy from hot water. Long story short: the thicker the warm layers are, the more fuel/energy is available to feed the storms.

Typhoon Surigae/Bising has tracked west-northwestward at 9 knots overnight to Saturday. Animated enhanced infrared satellite imagery reveals that Bising has rapidly intensified over the past six hours, with the eye of around 5-10 nautical miles clearing.

Based on the advanced Dvorak estimation, the initial intensity is at around 115-120 knots, a solid Category 4 typhoon. The environmental analysis reveals that a very low shear of 10-15 knots is present over the Philippine Sea, with an impressive equatorward and poleward upper-level outflow ventilation. Attached above is a visible satellite during the early morning hours on Saturday.

Typhoon Surigae will continue intensifying this Saturday and will reach a Category 5 strength over the next 12-24 hours. And become a very violent tropical cyclone while gradually moving northwest over the next couple of days. Attached wind gusts swath map below hints how intense winds Surigae could develop – more than 250 km/h while moving towards the north-northeast Philippines.

The exact track of typhoon Surigae is, however, yet unknown, as some global weather models are taking a more westerly shift while some of them suggest a more northerly track.

In the case of Surigae taking the more western track, the system could spread heavy rains with massive flooding and severe damaging winds from the eastern Mindanao to eastern Visaya, and eastern Luzon over the weekend into early next week. 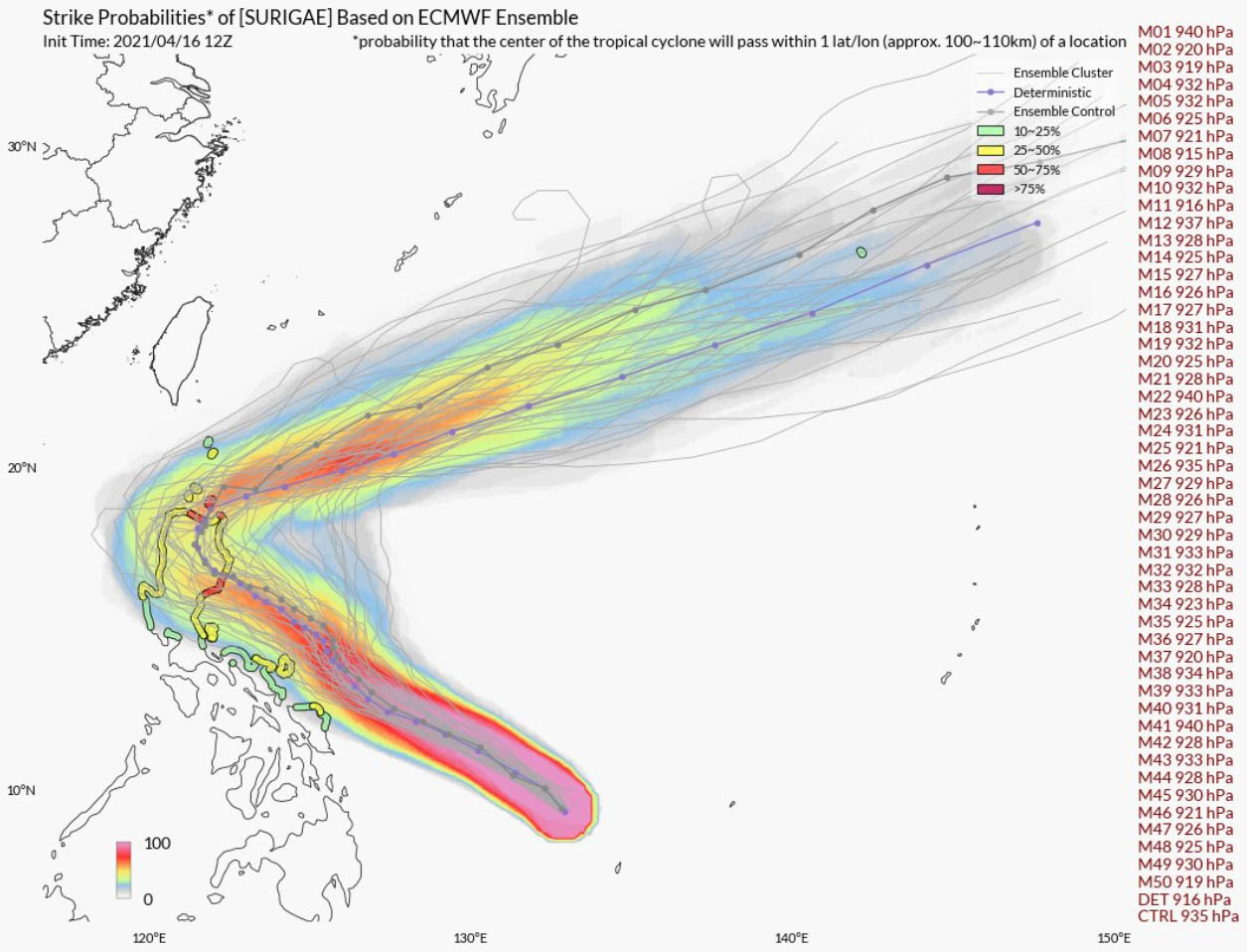 Attached below is the rainfall total map over the next 10 days, based on the ECMWF model. An *extreme* amount of rainfall could happen over the northern Luzon island and could lead to destructive flooding. It indeed strongly depends on how west shift the tropical cyclone will take over the next 24 hours. We can see 500-800 mm of rain will be possible.

Coastal flooding is likely to be expected, especially in bays and inlets, depending on where the Surigae’s center will pass. Destructive wave will blast the coast with major storm surge, potentially leading to land erosion.

After typhoon Surigae moves away from the Philippines, it will rapidly lose its strength coming into much less favorable oceanic conditions for tropical cyclones. However, conditions need to be very closely monitored of Surigae would threaten Japan island Iwo To. Stay tuned for further updates!